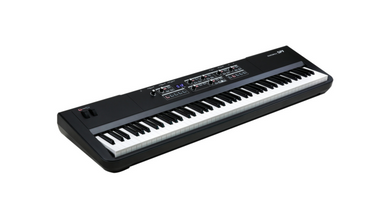 With its fully-weighted, 88-note keybed, 16 instrument sounds, 256-note polyphony, versatile FX and MIDI control capabilities, Kurzweil’s new SP1 is a capable keyboard for musicians of all levels in a variety of applications. SP1’s intuitive controls and affordable price makes it a perfect keyboard for students, schools, private instructors and music lovers of all ages.

The SP1’s velocity-sensitive keybed feels and plays like a high-quality acoustic piano, an advantage for students and musicians. MIDI in and out jacks allow the SP1 to function as a MIDI controller making it an attractive option for home recording and multi-keyboard set-ups. The SP1’s 16 programs in 4 instrument categories are a specially selected group of sounds derived from Kurzweil’s professional keyboards. Its intuitive controls encourage a “sit down and play” experience while offering generous user sound customization options via the versatile FX and EQ sections, as well as Split, Layer, and Dual functions. There are 5 FAVORITES buttons enabling users to save their custom sounds.

Pricing and Availability:
The SP1 keyboard will retail at $995. For more information head to the Kurzweil website.