Dreadbox gets colourful with its Chromatic Module range

Six modules have been announced, with more to come. 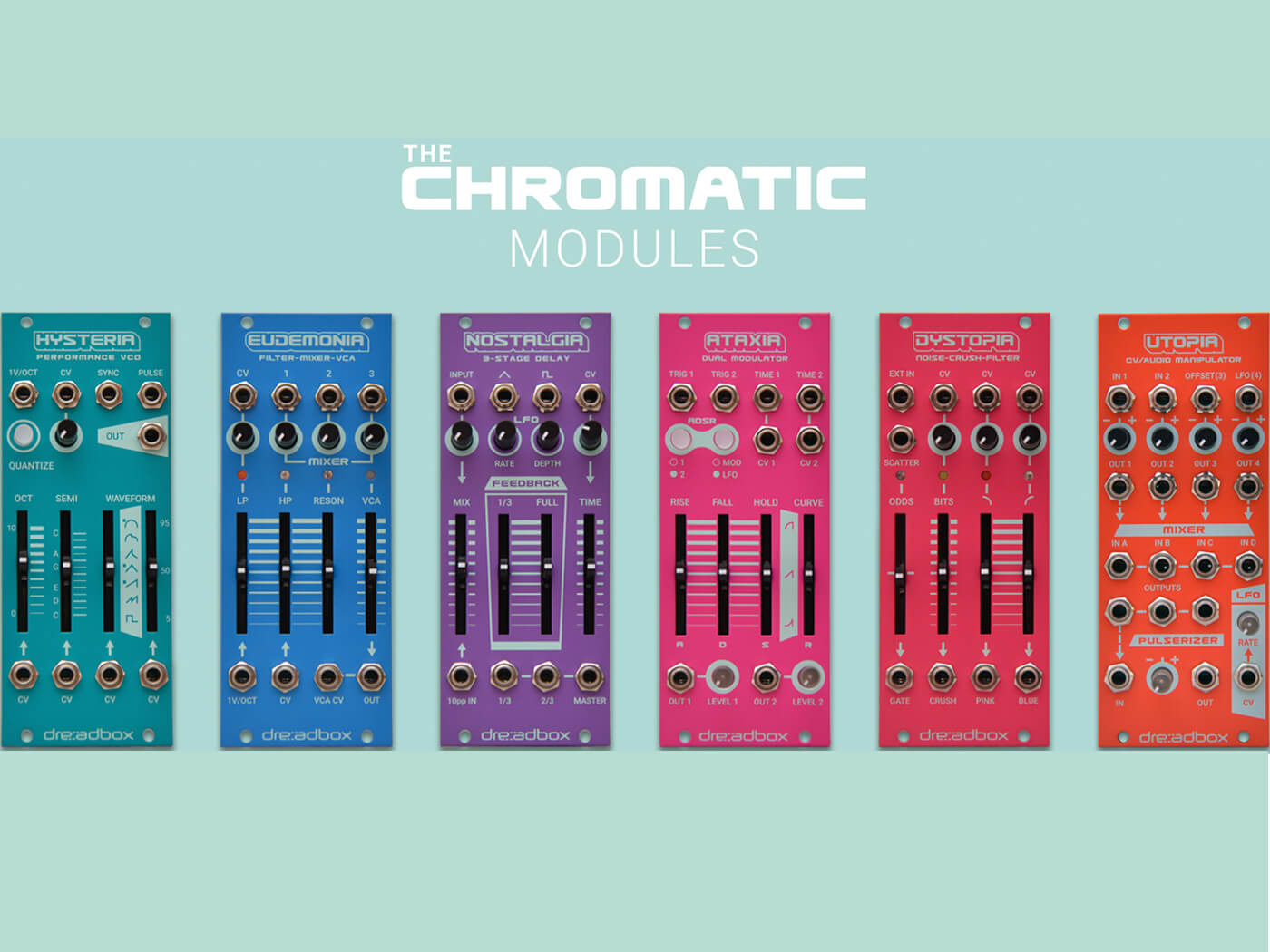 Dreadbox gave a taster of its new brightly coloured Chromatic series at Dutch Modular Fest 2019 over the weekend. All six modules are priced at under €100, which could be appealing for modular fans looking to get some bang for their buck. These are said by Dreadbox to be available in December this year, with more to be released in the future.

For now, the six we’ve been given are as follows:

Described by Dreadbox as a “Performance VCO”, Hysteria is an analogue oscillator with a range from 16Hz up to 32kHz, and a VC quantizer to keep it in tune. There’s a good selection of seven wave options, and also a voltage controlled wave shaper. It also has a hard sync input and pulse output to be used as a clock, or to sync it to other oscillators. It will cost €99.

This is a filter-mixer VCA, capable of mixing three sources into one, featuring a high and low pass filter, resonance control and exponential VCA with a peak indicator. This sits at €89.

Nostalgia is a 3 stage hybrid delay, which is based on the delay from Erebus, an analogue synth made by Dreadbox. Interestingly, it sports an LFO with triangle and square options and range functions. There’s outputs for stage 1 and 2 where the output is ½ lower than incoming signals, as well as separate inputs for guitar and modular level inputs. Nostalgia is €89.

This is a dual modulator that can operate in three different modes: a rise-hold-fall function generator, a delay-rise-fall-LFO, or an ADSR envelope. Curve response can be adjusted and there are two trigger inputs, time controls and level control over the outputs. It will cost €89.

While not sporting a very dystopian colour, this noise-crush filter does as it says. It can generate a range of noise timbres and features a variable bitcrusher. Digital noise can also be used as a random gate generator. In addition, it features both low-pass and high-pass filters. It will cost €89.

The final module announced is Utopia, a CV-Audio manipulator that offers a host of features. It can be used as a mixer, an attenuator, a buffered splitter, a VC LFO, and a pulserizer function. Dreadbox says pulserizer will “distort and convert signals into a square wave. Utopia will cost €79.

The Chromatic series is available in December, and more information can be found at dreadbox-fx.com