Casio have announced that they are releasing the GP-400BK, the most recent addition to the Celviano Grand Hybrid piano lineup. Combining the advantages of both digital and acoustic pianos. Read on for more info… Official Info DOVER, N.J., April 7, 2016 /PRNewswire/ — Casio America, Inc., announced today that it will release the GP-400BK, the […] 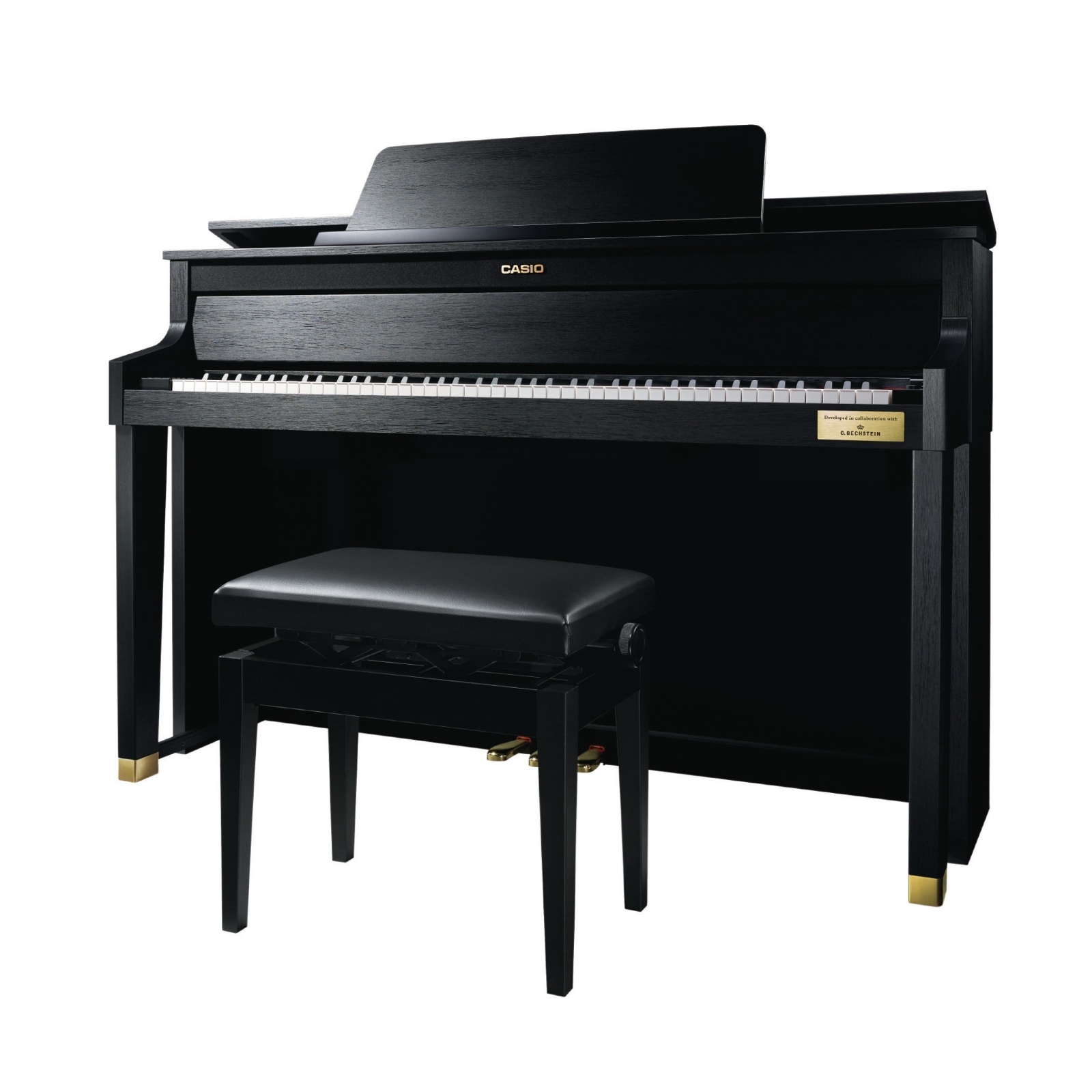 Casio have announced that they are releasing the GP-400BK, the most recent addition to the Celviano Grand Hybrid piano lineup. Combining the advantages of both digital and acoustic pianos. Read on for more info…

DOVER, N.J., April 7, 2016 /PRNewswire/ — Casio America, Inc., announced today that it will release the GP-400BK, the newest model in its CELVIANO Grand Hybrid lineup. The CELVIANO Grand Hybrid pianos combine the advantages of both digital and acoustic pianos, while delivering the performance of a grand piano in tone, keyboard quality and playing comfort.

Casio previously released two pianos in the CELVIANO Grand Hybrid lineup in 2015– the GP-500BP and GP-300BK – and both were equipped with the company’s AiR Grand Sound Source and Grand Hammer Action keyboard. This keyboard is made with full-length wooden grand piano keys, using the same materials and processes as the C. Bechstein grand pianos.

The new GP-400BK comes with the three historically popular grand piano sounds featured in the GP-500BP and GP-300BK, as well as the same reliable key response and supple playing comfort. New with the GP-400BK is the design, which boasts a curved rear panel and thicker side panels and legs.

The height from the keyboard to the music stand has also been made the same as a conventional grand piano, for an experience even more like that of playing a grand piano. In addition, Casio used a black wood grain finish for the entire piano to give it a dignified look. All of these design features come together in this latest elegant model in the CELVIANO Grand Hybrid lineup.

“The introduction of the GP-500BP and GP-300BK in 2015 brought fresh and innovative products to the market that moved beyond the realm of the conventional digital piano and gained a strong reputation among people who appreciate the nuanced sound and feel of a grand piano,” said Stephen Schmidt, Vice President of Casio’s Electronic Musical Instrument Division.

“This year’s launch of the GP-400BK further establishes Casio’s commitment to the industry and will emphasize the same revolutionary features, while also incorporating a new design to capture the bold and refined image one expects of a high-quality piano.”

Thoroughly refined sound and reverberation reminiscent of a grand piano
The AiR Grand Sound Source reproduces the same beautiful sound and rich reverberation as a grand piano. Multi-dimensional Morphing smoothly transforms sound waves, and realizes tonal changes based on both time passage and intensity. Even during a gradual crescendo from pianissimo to fortissimo, the technology allows even and natural tonal changes. Moreover, the String Resonance System, designed to deliver the string resonance of a grand piano, controls the amount and combination of resonance according to the playing situation.

By producing reverberation that fits each of the 88 keys, the technology enables natural and comfortable performance. Moreover, Damper Resonance, Lid Simulation and Key Release Simulation further the experience.

By combining these technologies, the GP-400 offers the sounds of three grand piano styles – the Berlin Grand which is known for its elegant, clear sound and reverberation that gives each performance rich melodic color; the Hamburg Grand which delivers gorgeous power and strength with a lot of string resonance; and the Vienna Grand which provides calm bass with a solid feeling along with soft and beautiful sound.

Casio’s Natural Grand Hammer Action Keyboard enables even more delicate expression as the GP-400BK’s keys are finished in the same way as a grand piano’s. The high-quality spruce makes it more familiar to the pianist ensuring fingers are less likely to slip or fatigue. The new model also boasts a new unique action mechanism that delivers the right hammer movement, which has a big impact on the playing response of a grand piano. The mechanism conveys delicate finger nuances more accurately, and enables dynamic touch to translate directly into expressive power.

Casio has developed a Grand Acoustic System that generates a space of three-dimensional sound and faithfully represents the sound of a grand piano as it emanates from above and below the soundboard. Through careful positioning of six speakers and the creation of sound pathways, the system delivers three-dimensional sound with tonal elongation, expansion and depth.

Special playing experiences made possible by a digital piano
The Scene feature enables pieces to be played with the optimal sound as it consists of 15 preset types for different composers such as Chopin and Liszt, as well as musical genres such as jazz and easy listening. The presets combine the best optimal tones, reverberation, and effects for the type of piece being played. Users can also create and save their own presets. The Concert Play feature allows users to feel like they are accompanied by an orchestra as it is recorded in a high-quality digital format. By playing the piano together with the recorded orchestra, users can enjoy the feeling of performing at an orchestral concert. The technology can also be used in practice, as it allows the tempo to be slowed, and also features rewind, fast forward, and repeat playback of A-B sections.

The Hall Simulator allows the pianist to enjoy the immersive sound found in different types of venues such as an Amsterdamchurch, or a classical concert hall in Berlin. Also, the GP-400BK enables users to switch between the Player’s Position, which provides a sense of playing a real grand piano, and three types of Listener’s Positions, that offer the pianist the effect of listening to the performance from the audience.

The GP-400BK will be available in July at select music dealers nationwide for a MSRP of $4,999.00. To learn more about Casio’s Grand Hybrid pianos and full portfolio of electronic musical instruments, please visit www.CasioMusicGear.com.