If the fruits of your songwriting just aren’t exciting enough then don’t worry: in our latest songwriting tutorial we explain the most effective methods to make your music pack a punch. Andy Price raises the volume… We’ve already laboured over several technical aspects of songwriting. This time we’re going to look at something a little […] 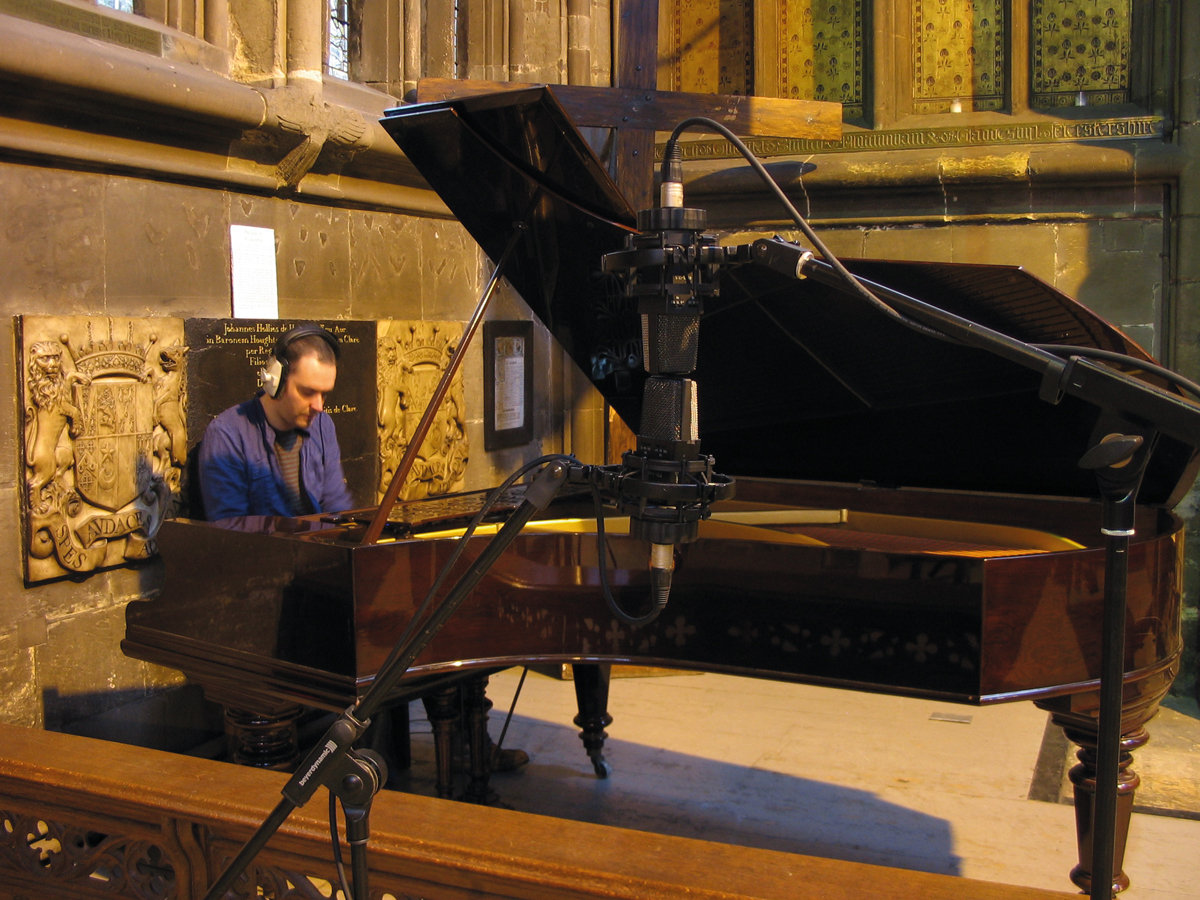 If the fruits of your songwriting just aren’t exciting enough then don’t worry: in our latest songwriting tutorial we explain the most effective methods to make your music pack a punch. Andy Price raises the volume… 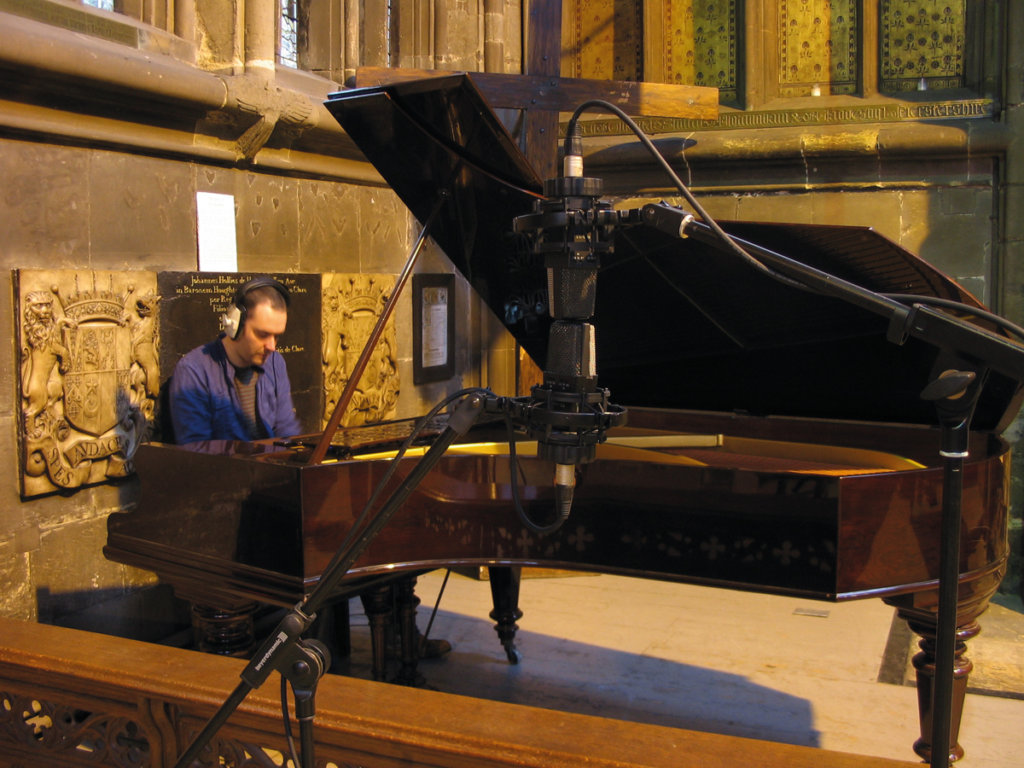 We’ve already laboured over several technical aspects of songwriting. This time we’re going to look at something a little bit more ‘feel’ based: dynamics. A grasp of dynamics is undoubtedly one of the more important skills you’ll need to develop as a songwriter. Simply speaking, the dynamics of a song refers to how loud or quietly a song is played or performed – in standard musical notation, various symbols are used to demonstrate this. A grasp of dynamics will aid you to bolster certain aspects of a song that you want to emphasise; by using extremes of volume sparingly you can make your compositions far more effective and better stimulate the listener’s interest

Quite often it’s in the mixing stage when the most dynamic changes and enhancements are made to a track, but your song still needs to be written from the start with dynamic principles in mind. Most singer/songwriters playing with just an acoustic guitar for instance, will thrash their acoustic guitar and then gently pluck it during the quieter parts of the song – this physical approach to altering volume is how many songwriters form their initial demos.

In your mix, a common way to hook a listener is by starting slowly with minimal instrumentation, often without any percussion. Eventually the percussive elements kick in, before the other musical elements slowly materialise, performed at a more energetic rate, easing the listener into a complex arrangement. At a certain point a return to the initial simple stripped down introductory section happens.

These shifting dynamics enhance the song and re-affirm the melody. For example, the opening of In The Air Tonight by Phil Collins and Hey Jude by The Beatles. This concept doesn’t need to just apply to the song as a whole, it can be used with instruments, vocals and individual melodies too. A melody should have dynamic variance: highlighting specific notes by increasing its volume in relation to the others can define sub-hooks within the main melody.

Tension/Release
Bolstering a song’s choruses by ramping up the volume and instrumental density is a frequently used dynamic trick. The ‘quiet verse/loud chorus’ effect is used in many genres – perhaps the best singular example of this is Nirvana’s Smells Like Teen Spirit: although the actual notes played in both verses and choruses remain the same, the volume substantially increases and the vocals transform from a lethargic mumble into a full-on scream. This effect enhances an otherwise fairly simple song musically into being something much more energising and exciting – keeping the listener anticipating the big chorus.

Most contemporary pop is dynamically built around supporting a central chorus hook, with volume and momentum building towards the big explosive release of the chorus. This is best exemplified by something like Katy Perry’s Firework, a song with a relatively simple harmony which is brought to life by a clever use of dynamics. If you want your choruses to sound big then your verses have to serve their purpose in building towards them at a much less energetic pace.

A song’s power doesn’t necessarily need to be just enhanced by upping the volume. Adding harmony and octaves to your melodies and counter-melodies can fatten up your track to the point where it sounds colourful, rich and textured. Doubling the lead vocal melody is a good basic move you can make, particularly in choruses which often need to have their central hooks re-affirmed. Adding a multi-part harmony can double the effectiveness of a ‘loud’ part of a song without actually having to increase the volume or sing in a different way.

Another useful dynamic skill is harnessing silence to your advantage, letting a note hang adds to its resonance, both technically and emotionally speaking. These well-placed silences fuel the listeners’ anticipation for what will come next in the song. It can be a very useful tool so it’s worth experimenting with to work out how best to utilise a complete lack of sound, as overusing it can reduce its impact. A well-placed silence can be as meaningful as any chord or note.

Tension is one of the most important aspects in songwriting; it’s something that often goes unnoticed but the expectation of hooky-resolution can be as enticing as the actual event itself. As we’ve previously discussed, certain chords naturally lead to others in their relative keys, and you’ll naturally feel the need to emphasise the resolving chords by underlining them with volume (or lack of!). In dynamic terms, removing certain instruments from the mix triggers a sense of incompleteness in the listener’s ear and a desire (and expectation) for them to be restored.

The rhythm section obviously plays a large part in the dynamic contrast: the intensity and complexity of the drums is something that needs to be taken into account when crafting a song dynamically. Many drummers will ‘feel’ their way through a song and naturally pick up on the variance in volume and intensity by listening to a demo. However, when self-composing or writing/recording with a DAW or rhythm programmer it’s important to keep your beats uncluttered during the quieter sections and increasing the number of fills and the velocity at which the drums are hit for the louder, more explosive, sections.

Likewise with notes, as a general rule it’s best not to have overtly complex riffs, lead lines and/or counter melodies running over a section you’ve decided will build towards your main hook (or if you do, keep the volume at which these are played to a minimum!).

Undoubtedly the best way you can fully gain an understanding of musical dynamics is to watch a movie, paying particular attention to the soundtrack.

Note how the music compliments and underscores particular emotional, thrilling, tense or moody beats in films. In particular with the horror genre, building volume is used to emphasise tension and terror, usually culminating in a sharp and abrupt resolve, followed by a silence (usually the part of the film where the hero/heroine takes a breather and realises there isn’t a murderer in the closet…).

Look at the work of Hans Zimmer and you’ll see how it’s not just a standard orchestral approach that can manipulate the emotions of the audience: he uses surprising high register sounds, ominous low horn-like rumbles and uncomfortable sound effect-y interjections which work well at bombarding the viewer with information, directing them to respond in a certain way. This use of sound in a soundtrack is engineered to play with the way your brain processes sound, and it works mightily well. It’s exactly the same principle with popular music.

Being aware of dynamics and how they work on a listener’s ear is the central crux of good songwriting. The dynamic movement equate to how a song ‘breathes’ in a listener’s ear: if this was demonstrated by a line graph we’d see that most pieces of music have regular spikes of power followed by dips, and it’s this variance that really keeps the listener interested in any piece of music. Keeping these principles in mind will undoubtedly enhance your songwriting

Focus On Dynamic Notation
When studying film soundtrack scores or classic music in general, one thing that becomes apparent is how hugely important accurately logging a piece of music’s dynamic movement is. You can see in the accompanying image how the various dynamic approaches are represented in various letters that explain both how a piece of music as a whole should be played and also those at the start of each musical section.

A gradual build up of sound is referred to in standard musical notation as a Crescendo and the reduction of volume is known as a Decrescendo. In volume terms, one end of the volume scale is Fortissimo which means “very loud” and Pianissimo which means “very soft”. It can be extremely beneficial to learn these terms when working with other musicians or when writing music in standard notation for others.

1: In this song idea, I’ve recorded a couple of building verses at a relatively restrained and quiet volume. One (uncompressed) track of lead vocals with occasional backing vocals sweeps in at the end of both, and this restrained vocal performance builds towards a large chorus. The mic is positioned relatively close to my mouth at this point.

2: I then emphasize the large chorus with a raft of more backing vocal tracks, recorded in a different environment and at a greater distance from the mic. I can let rip from a performance standpoint and record myself singing the relatively simple chorus melody at a great volume, in a deep register and at a high pitch which I can mix and merge with the other tracks. 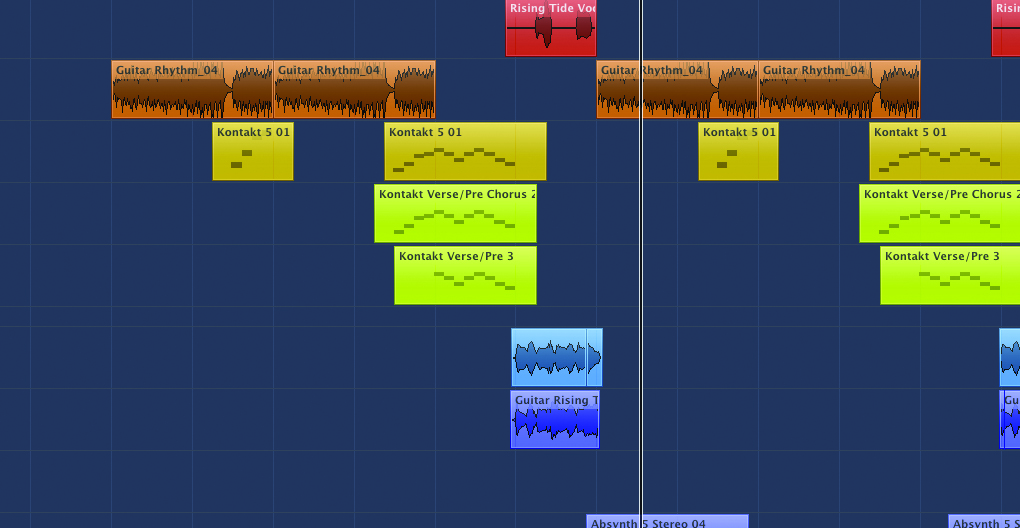 3: Before and after each chorus (in red) I’ve added MIDI strings which rise and fall, massaging the listener into the chorus. During the chorus the strings are replaced with high-register lead guitar to underline the perceived volume increase. These dynamic considerations help turn a melodically straightforward song into something more exciting.

And here’s the final song… 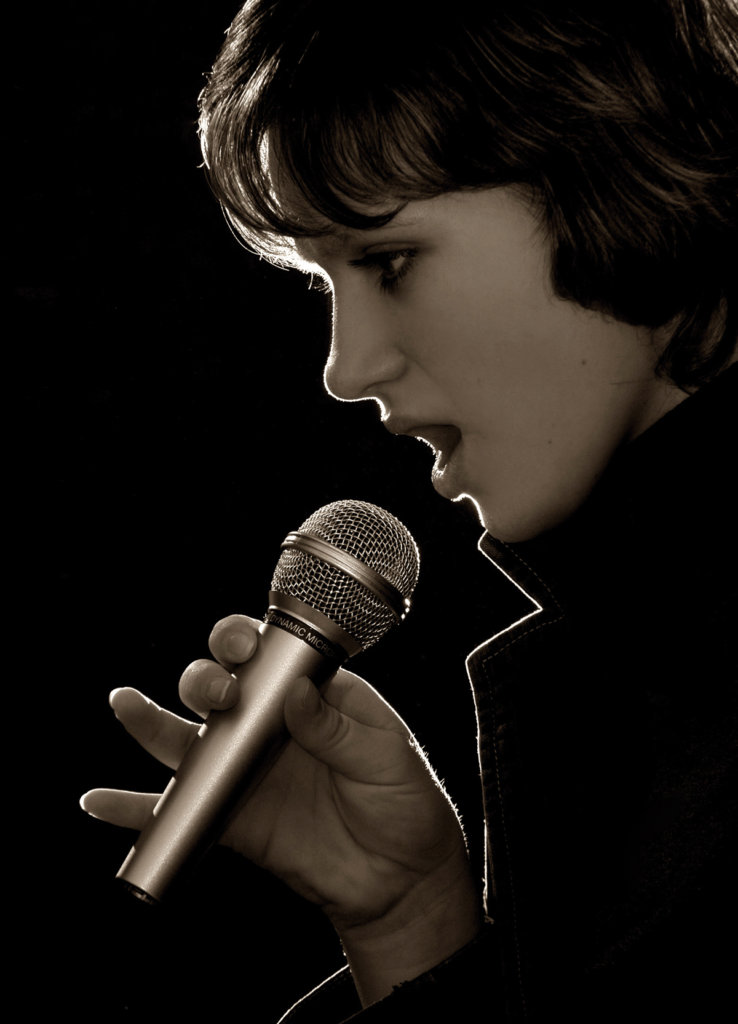 1: In terms of recording vocals, good mic technique is very important when recording a song with variance in sound and power without stopping. Remember to keep close to the mic (around six to eight inches generally) when recording vocals at a normal volume. However when belting out a powerful or chorus you’ll need to move your mouth further away to avoid peaking. 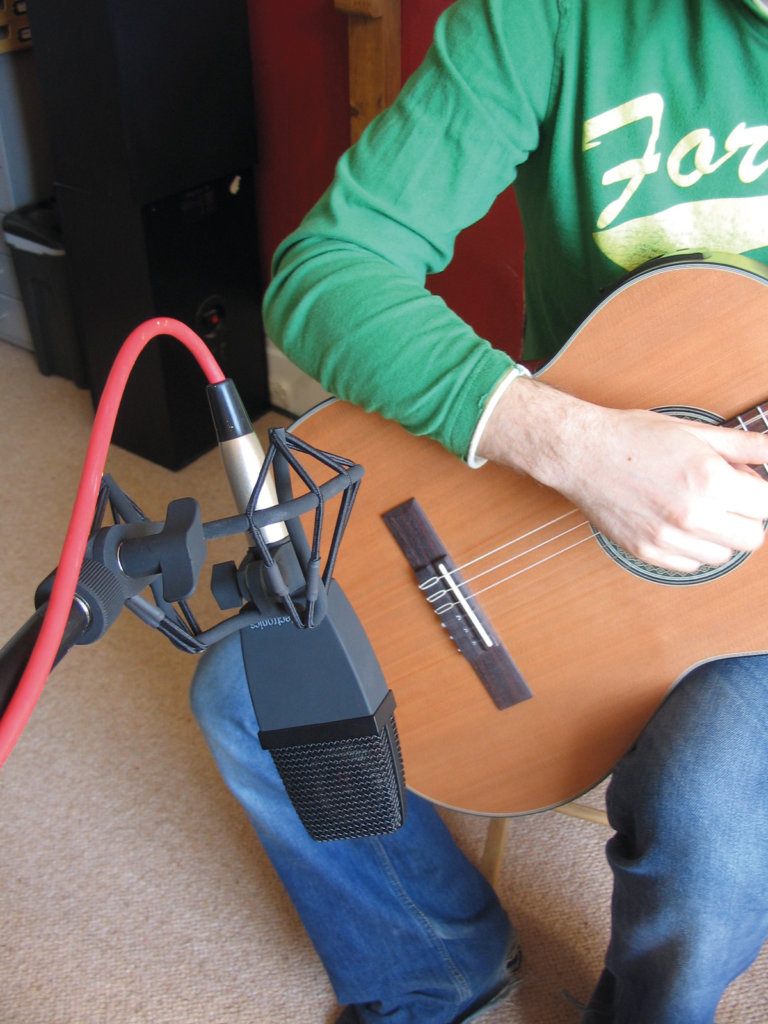 2: As with vocals, an acoustic guitar may require you to position yourself differently when mic’d. But if you’re directly injecting into your DAW through your audio interface you’ll need to keep an eye on your input volume, adjusting it so more delicate work is captured clearly and more intense strumming is well-defined.

3: Recording a piano presents a number of options in terms of mic’ing, depending on the genre, and speed/power of the track. However, regardless of your mic setup it’s very important to record in a room with good acoustic properties that eliminates low frequency resonances – these can be difficult and time-consuming to remove at a later stage.