What iOS apps and interfaces do we need to replace our favourite ‘real’ music production setups? Martin Delaney rounds up the best hardware and apps and says it’s all about the mix and match. In this first part we look at mobile DAWs… Mobile DAWs For every computer-based studio, there’s a Digital Audio Workstation – […] 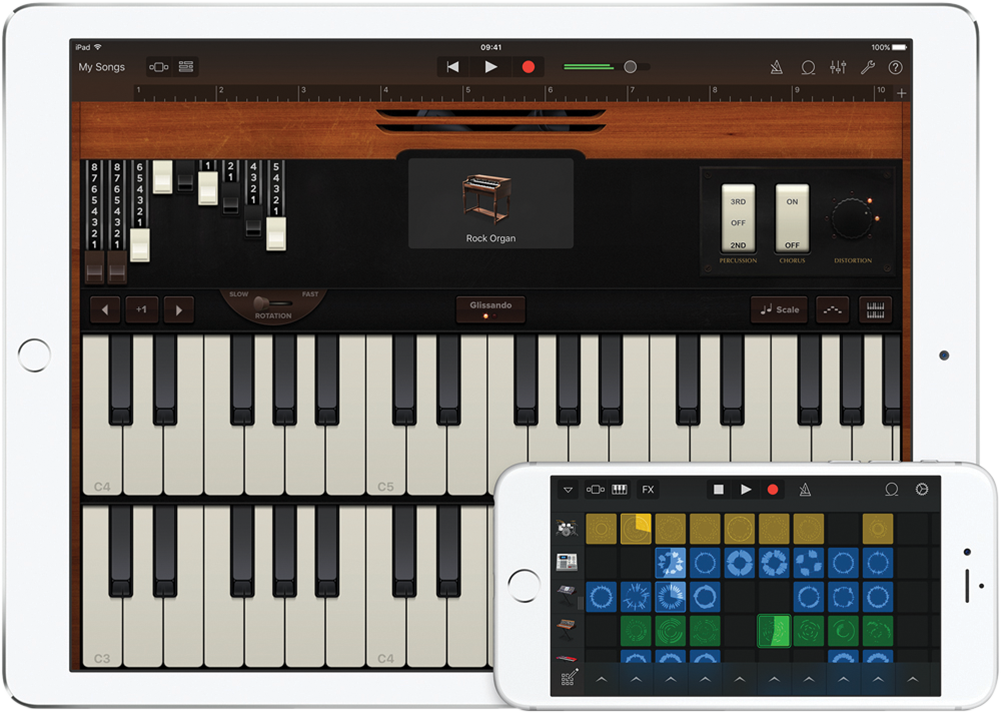 What iOS apps and interfaces do we need to replace our favourite ‘real’ music production setups? Martin Delaney rounds up the best hardware and apps and says it’s all about the mix and match. In this first part we look at mobile DAWs…

For every computer-based studio, there’s a Digital Audio Workstation – the one application that handles the bulk of recording, composition, and mixing. In iOS Music Land, however, things are more fragmented, and it’s not likely that you’ll find one mobile DAW that does it all, although a well-chosen combination of two can usually cover everything… 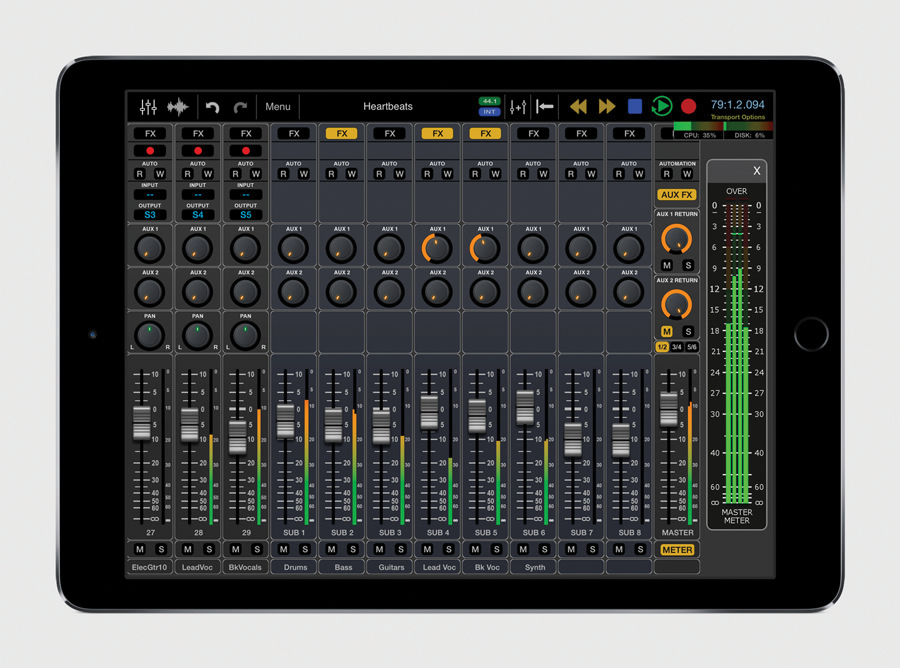 Auria Pro also includes a suite of plug-ins, including a rather nice PSP channel strip with EQ, compression, expansion, and gating. There’s also a convolution reverb, a handful of other effects including stereo delay, and the FabFilter One and FabFilter Twin 2 synths are included.

The mixer includes six aux sends, and PSP have also supplied a master strip with EQ, compression, and limiting. Extra plug-ins are available as in-app purchases including PSP Micro Warmer, FXpansion’s DCAM BusComp, Positive Grid’s JamUp guitar amp, and even Drumagog! Other purchasable items include IR files, video-import functionality, and various loops and samples. On the control front, Auria Pro is MIDI mappable, and supports remote control via MCU and HUI. This is as full-blown as iOS DAWs get. 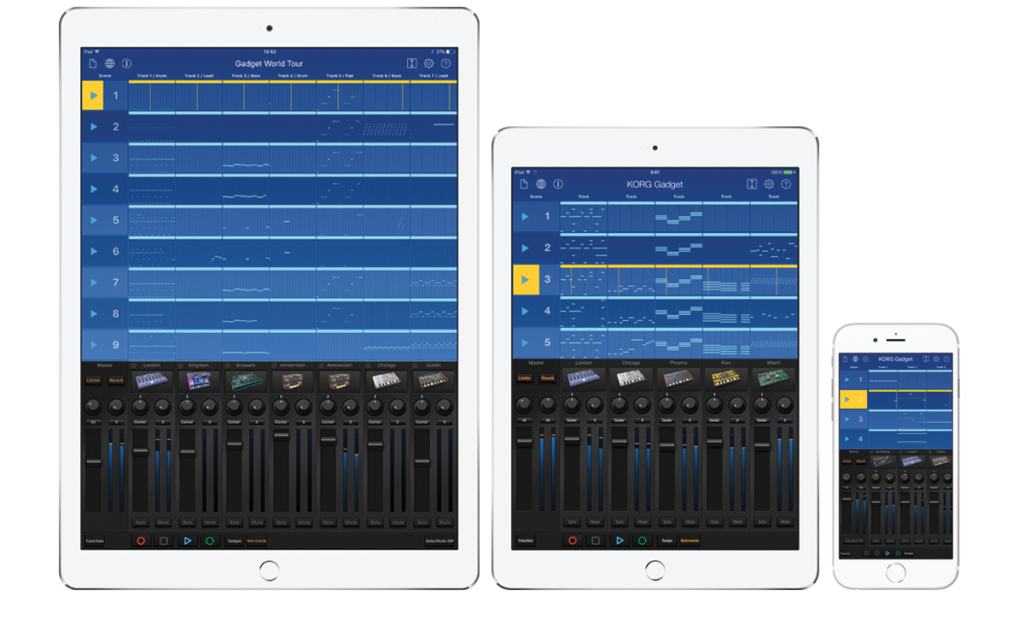 Price £29.99
Contact www.korg.com
If you’re more concerned with electronic music, and you’re still wishing Ableton would pull its finger out and release Live iOS, your best bet is Korg Gadget. Gadget doesn’t do audio recording at all, but you can import samples, record and program MIDI patterns, and even trigger your arrangement in sections, much like the way Ableton Live uses scenes.

There’s a reason for this – not only can Gadget projects be rendered as stereo mixes or MIDI files, they can be exported as Ableton Live projects that you can open with Live on your computer, so, naturally, the similarities with Live’s organisation of clips and scenes are essential to make this work.

This is a gift for Live users who are travelling light. Gadget installs with a selection of instruments, and there are more available as in-app purchases, including the London drum module, Bilbao sample player, Chicago acid-house bass machine, Montreal vintage electric piano, and the Kiev digital synth.

Each gadget has presets, and a fairly simple level of control available, but by mixing and matching them, and by employing automation within the clips, a decent level of sound design is possible – the results are good enough that they don’t embarrass themselves when you port the project over to Ableton Live and mix it with sounds from other sources.

Naturally, importing your own custom samples will impart more individuality and sonic variety to proceedings. Other Gadget features include MIDI sync, MIDI mapping, unlimited tracks (exactly how many tracks you can use will be limited by your hardware), and support for Ableton Link, inter-app audio, and audio bus. Especially since it runs on the iPhone as well, Gadget is a fantastic Ableton-ish sketch pad that you can always have with you.

Price £3.99
Finally, we have GarageBand – which might seem a bit of a tame option. It’s Apple, and everybody knows about it already, right? However, it’s very capable for basic recording and composition, with a great suite of ‘instant music maker’ tools if you’re really in a hurry to sketch things out.

The killer GB iOS feature is, of course, that the projects it creates can be dropped over to a Mac and opened immediately in the OS X version of GarageBand, or even Logic Pro X itself – no intermediate conversion is required.

The last major update added two important features: Audio Unit Extension support, which allows the hosting of third-party-instrument apps within the GarageBand environment, and – provocatively – the introduction of a suspiciously Ableton-like interface for Live Loops, where you can launch individual audio or MIDI loops, manipulate audio effects (including orientation-based parameters), and trigger rows of loops simultaneously to create scene-like behaviours. GarageBand costs £3.99, which is a huge bargain, considering what it can do. But don’t underestimate it because it’s cheap!

The Setups – Part 1:  The Multi-Channel Recordist

To create a DAW-type rig with an iPad and Auria Pro, you’ll need a multichannel audio interface – with an app that can record up to 24 tracks simultaneously, a simple two-in/two-out isn’t really going to be adequate.

There’s the Focusrite Scarlett 18i8, for example, which can provide up to 16 channels of analogue in; but you’ll need to power it from the provided mains power supply as an iPad cannot provide enough power for a device like this.

You’ll then need a basic USB cable and Apple’s Camera Connection Kit. If you’re willing to jump through more hoops by adding a mains-powered USB hub, you could add a MIDI control surface as well. If you’re more interested in an Ableton Live-style rig, which might be more about launching loops and MIDI control with Gadget, you could choose the iConnectivity iConnectAUDIO2+, and pair it with the Faderfox PC4, a compact MIDI controller with 24 knobs.

The iConnectAUDIO2+ needs mains power, but does connect directly to the iPad without the CCK, and the PC4 connects to the iConnectAUDIO – saving a few cables along the way. GarageBand iOS only supports stereo recording, so hardware selection for that isn’t so critical.