Hollin Jones concludes his guide to Mastering in Software… FabFilter’s Pro-L is a great limiting plug-in that can be used to squeeze the maximum amount of power out of your tracks without crushing them.  Squeeze the Sound There’s no strictly defined order in which to start processing your master but many producers like to begin […] 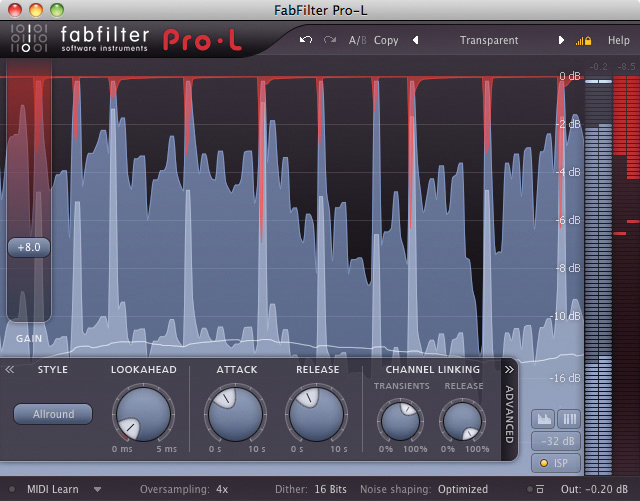 Hollin Jones concludes his guide to Mastering in Software…

FabFilter’s Pro-L is a great limiting plug-in that can be used to squeeze the maximum amount of power out of your tracks without crushing them.

Squeeze the Sound
There’s no strictly defined order in which to start processing your master but many producers like to begin with compression. If you have applied master buss compression during mixdown you may want to go a little easier during mastering so as not to over-compress or ‘pump’ the sound and risk sucking the musicality out of it.

Used carefully, compression is an excellent way of pulling together the louder and quieter parts of the signal to create a more even feel, ensuring that quiet bits aren’t inaudible and the loud bits don’t deafen you. Listen to any track where a singer practically whispers one line then screams the next and yet both seem weirdly about the same volume: that’s compression doing its thing. 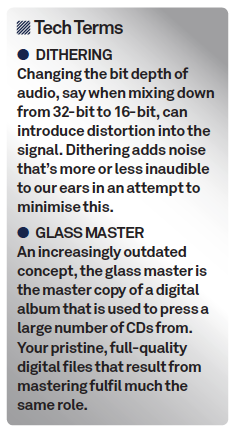 With mastering you want the compression to glue the whole signal together and smooth out the peaks and troughs but without sounding artificial. As such it’s usually better to apply a relatively gentle amount with a low-ish ratio and an attack time that’s not too quick. When you apply a compressor across the whole signal it has to deal with everything from the bass to the crash cymbals, so using a decent quality model is preferable.

Though different from EQ this can be a very useful trick because it helps you to deal more effectively with rogue groups of sounds. For example, if the bass is too loud in the mix, using EQ to take it down might lessen the power and impact of the track, but using multiband compression to control it serves to level it off rather than knocking it out and should also help it to blend with any nearby frequencies. 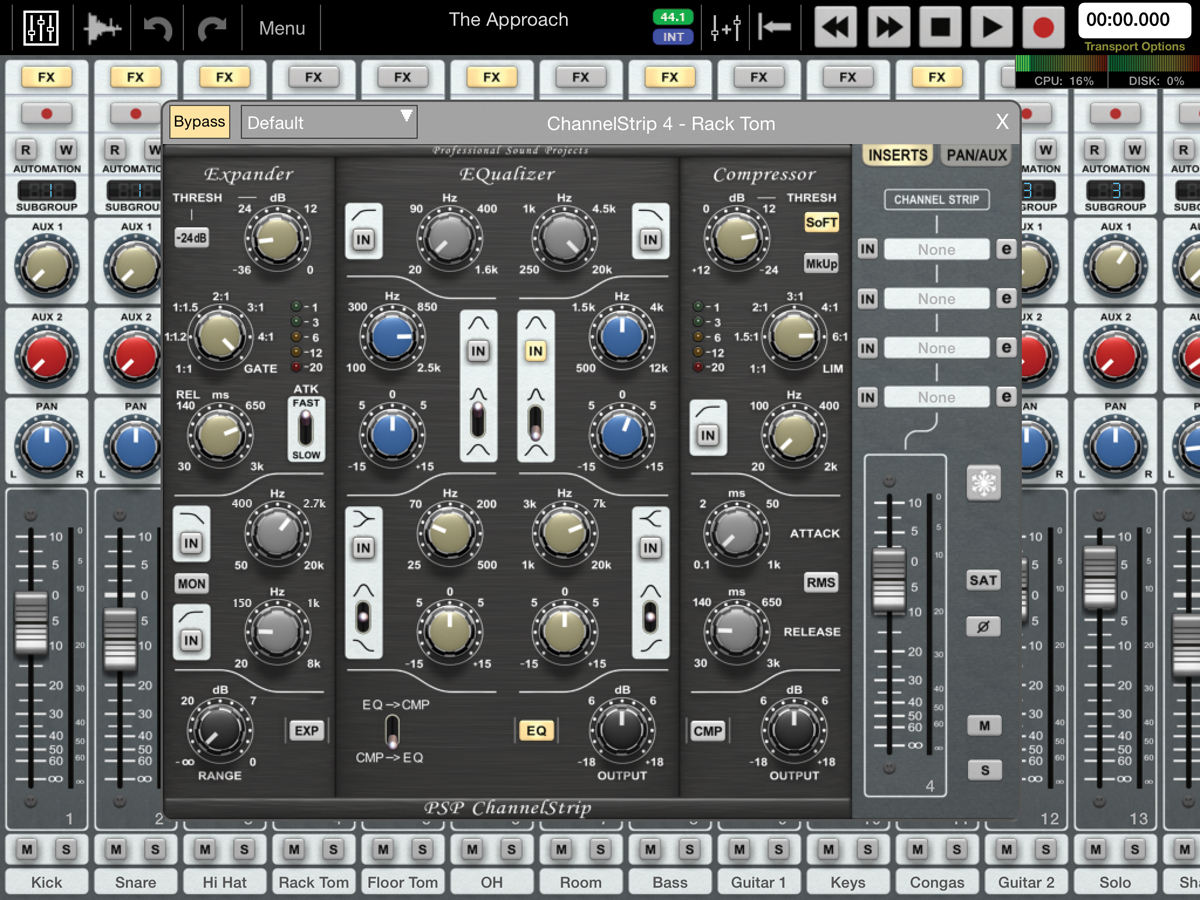 Become the Equalizer
With your audio ‘glued’ together by compression it’s time to use EQ to sweeten and balance the sound. You will invariably find that a little EQ during mastering can really help, even for a track that has been mixed well. A parametric EQ is a good choice as it provides a nice visual representation of the EQ curve and will have multiple points and Q controls.

The aim of mastering EQ is to pick out certain elements of a track and then either back them off or, more usually, enhance them by pulling their frequency up a little. The Q settings of a parametric equalizer are particularly useful here because they control the width of the area around the EQ point and thus the amount of frequency to either side that is affected. 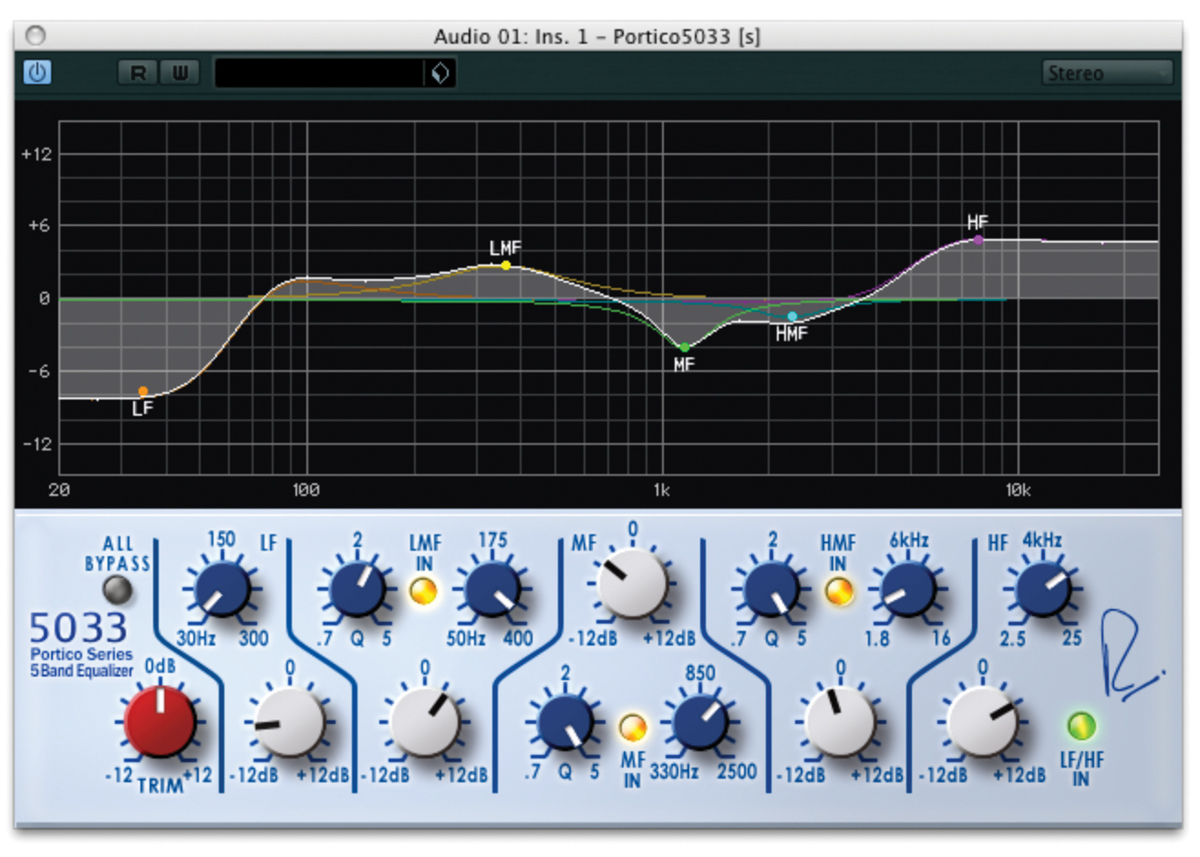 A good parametric EQ will serve you well for mastering. If your budget stretches far enough then Steinberg’s Portico 5033 EQ is an excellent choice

So to perform a broad boost to the lower mids, for example, you might use a wide Q value and a gentle rise in the gain. To isolate a single sound such as a guitar, use a narrow Q value and pull the sound up or down, leaving similar sounds to either side relatively untouched.

As good as your mixdown is you will always find small improvements that can be made at this stage, especially when the other mastering effects have changed the character of the sound in their own ways. Because you are applying an EQ curve across the whole track you can control the feel of the soundstage much more easily.

There are some commonly used techniques here in addition to sweetening the sound, such as performing a very low bass roll-off to deal with any sub sounds, and either adding or cutting very high frequencies to add sparkle or remove hiss.

Take it to the Limit
The third core process in mastering is limiting, which means driving the input level of the signal while ensuring it doesn’t exceed a predetermined level. The goal here is to ‘squeeze’ as much gain and power out of the signal as is appropriate but without causing it to clip and without ‘crushing’ it so it becomes dull and lifeless. Limiting comes at the end of the processing chain because anything placed after it could interfere with its operation by negatively affecting the signal.

At their simplest, limiters just have input and output gain controls. You need to set the output level to 0dB or just below, say -0.1dB, in order to ensure that the signal will not exceed this level and thus not clip. Use the input gain level control to drive the signal until you get a solid and consistent level, which means your level meters are spending a lot of time up near 0dB.

The aim is to bolster and boost the sound’s gain, and careful limiting is the reason so many commercial tracks sound much louder than those produced in home studios. It’s also the culprit behind the ‘loudness wars’ where commercial studios have tended to limit harder and harder, a phenomenon that reached its nadir with Metallica’s Death Magnetic, an album so tiring on the ears that some listeners actually sent it back.

It’s quite possible to over-limit and crush your signal, either by running the output level over 0dB or more likely by driving the input gain too hard. If your level meters are consistently hammering up against the zero mark, step back and listen to whether your track is in fact being squeezed too hard. You don’t want to suck all the dynamic range out of it because this kills its musicality – the levels should have a little movement left in them.

It’s generally accepted now that the loudness wars went too far; it’s not necessary to crush your tracks to death, just use some judgement in balancing a strong level against retaining the right amount of dynamic range.

Technology Focus – To Really Understand Your Masters, You Need To Check The Meter…
When mixing and mastering you spend a lot of time looking at the master level meters in your DAW or on your mixing desk. This is indeed where you can see if your signal is too loud or quiet, but it offers only one kind of visual feedback. 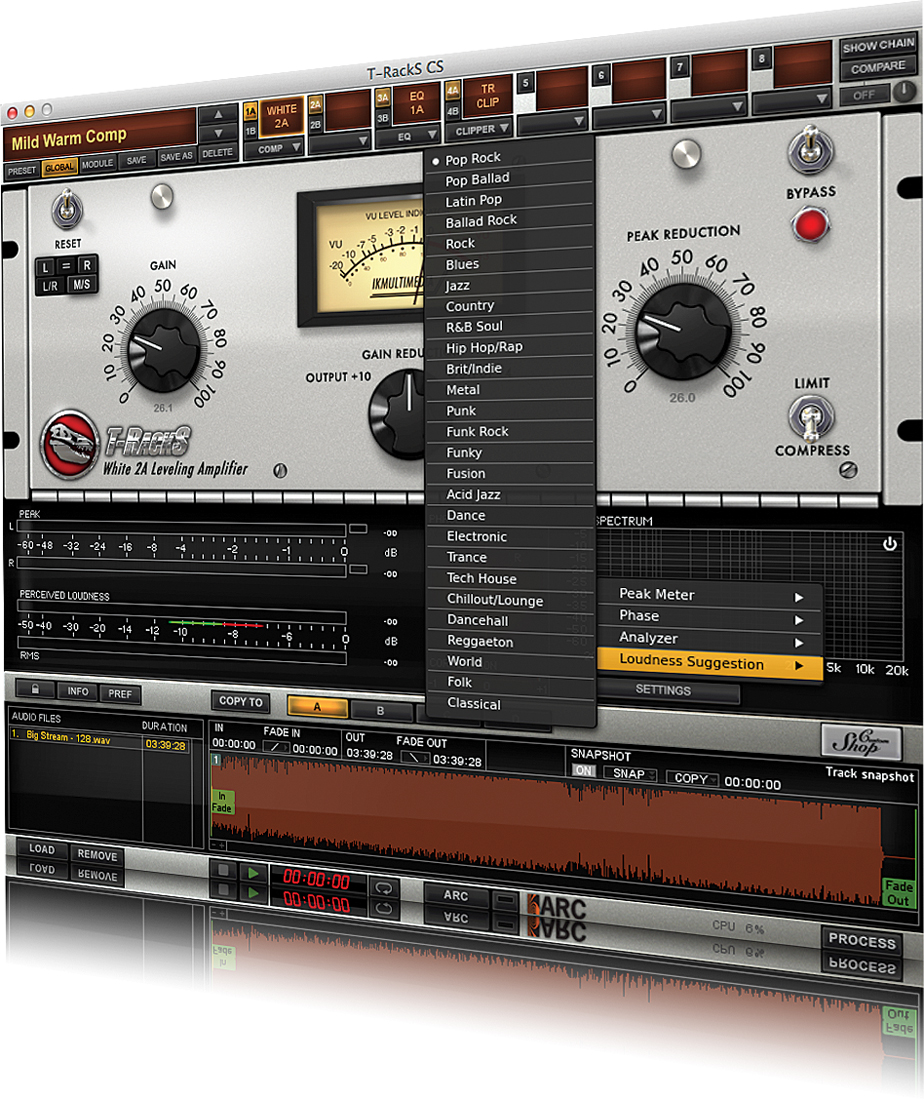 The modules in T-RackS CS also work individually as well as in a suite, and can be loaded into any DAW

To fully understand what’s going on you will need to use some more advanced metering tools. These can be applied as inserts across your master buss and don’t process or change the sound, they simply analyse it. Your DAW may come with an analysis plug-in or two but there are excellent third-party models available too from the likes of Blue Cat Audio’s Analysis Pack and Waves’ Dorrough Meter Collection and PAZ Analyzer.

What you gain by using proper audio analysis tools is a better insight into the way the frequencies in your master are really behaving. When you listen to sound through loudspeakers it is being affected by all kinds of factors including the character of those speakers, their placement and proximity to walls, and your position relative to them. For example, bass can sound very different depending on how you stand in relation to the speakers.

By analysing the sound before it leaves the computer, plug-ins can show you what’s truly happening across the frequency spectrum with phase issues and so on, and enable you to correct these during mastering. 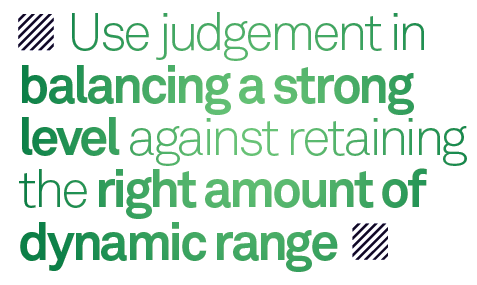 Best of the Rest
As well as the processors mentioned above you may also want to use stereo widening, and some more advanced metering can also help. Stereo widening should be used sparingly because it can quickly start to really mess with the soundstage if you push it too far, seriously altering the mix. It’s good to use a stereo widener with low and high controls and a configurable crossover point so you can keep the low end tight and centred while adding a little width to the top end. 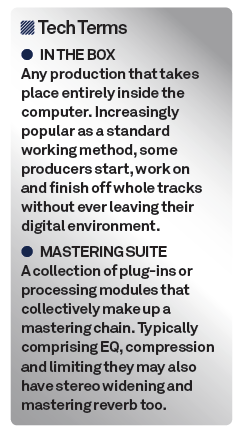 Regularly A/B’ing your master both with its dry, unprocessed signal and with commercially mastered songs in a similar style can be invaluable in helping keep you on the right track and getting the best end results. You’ll also need a decent set of monitors because you need as accurate a picture as possible of how your master is shaping up. And preferably get yourself kitted out with a really good set of headphones, since many of your listeners will experience your music this way.

When your master is done you can export it out to a stereo file and then top and tail it in a wave editor to deal with any errant reverb tails or clicks. Before signing off on a master it’s vital to listen back to it on as many systems as you can in case you find that for some reason the bass disappears on an iPhone, or the cymbals are way too loud on a car stereo.

Stuff like this does happen and it’s well worth going back and refining the master to account for it.