Hollin Jones continues his exploration of mastering in software…. IK Multimedia’s T-RackS is a self-contained mastering suite whose modules also work as plug-ins. It has a nifty ‘loudness suggestion’ feature so you can master appropriately for a specific genre.  Start With The Mix A lot of producers, even some at the top of the industry, […] 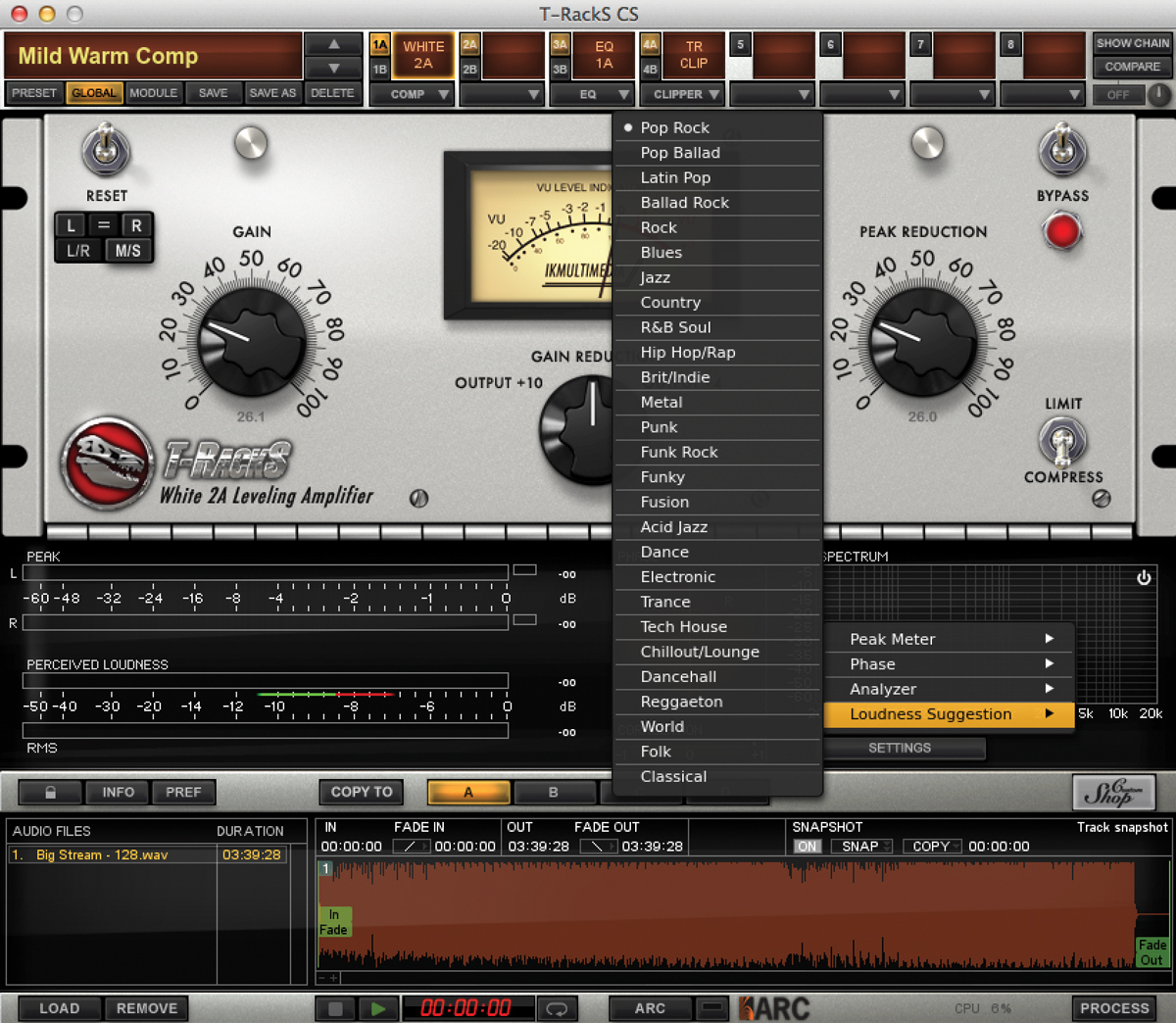 Hollin Jones continues his exploration of mastering in software….

IK Multimedia’s T-RackS is a self-contained mastering suite whose modules also work as plug-ins. It has a nifty ‘loudness suggestion’ feature so you can master appropriately for a specific genre.

Start With The Mix
A lot of producers, even some at the top of the industry, now work almost entirely in-the-box, which means that music is started, worked on and finished without ever leaving the computer. This has a number of benefits, not least that it greatly reduces the amount of physical equipment you need to do your job.

For those of us working in home or project studios it’s very useful to be able to do everything on one setup.

All major DAWs, such as Cubase, Logic, Pro Tools and Reason, now make mixing in-the-box a powerful experience. Although it’s possible to layer up lots of plug-ins on modern systems, it’s strongly advisable to separate the mixing and mastering processes because they have two distinct and different aims.

Click Here to Read How To Master a Track Using Ozone

Mixing is about balancing the elements of a track, and mastering is about affecting the overall sound once the mix is done. You will probably spend a fair amount of time on your mix, and possibly go slightly mad from listening to the same track hundreds of times, so it’s a very good idea to leave a little space between the two processes. Have at least a night off, preferably a couple of days, before you come back and start mastering.

It’s also a good idea to master tracks in the same sessions if they are destined to end up on the same album so there’s an overall coherence to the sound.

What you should end up with after a mix session is a track or a bunch of tracks that sound well balanced and hang together nicely. You might have also already used a little master buss compression during mixdown, which is a good trick to give a kind of audio ‘glue’ to your mixes and magically bind everything together.

When you export a mixdown you will have a few options. The most common technique is to export a stereo audio file at the same quality as the sessions, which might typically be 24- or 32-bit, and any sample rate from 44.1, 48 or even 96kHz. Don’t start reducing quality during mixdown, as it’s much better to keep everything at maximum and compress web versions and so on much further down the line.

Some producers will mix down a collection of stems for mastering and this is technically fairly easy to do by using mixer grouping and batch exporting from a DAW.

Stems are groups of tracks that all have a common theme as defined by the producer, so for example you might export drum stems, guitar stems and vocal stems for mastering.

The idea is that this affords you more flexibility during mastering because you are able to vary the levels of the different stems (which you can’t do using a stereo file of the whole track), effectively tweaking the mix even after mixdown.

It’s an interesting approach, although it does add an extra layer of complexity to the mastering stage. If you’re fiddling around by altering stem levels you might get bogged down in changing the mix instead of focusing on the mastering processing.

Technically it’s not so different from stereo mastering, it’s just that you load up four or five synchronised audio tracks and route them all through master effects instead of just the one.

Potential problems can arise from giving yourself too many options, so consider whether you trust yourself enough to get the mix right and use a stereo file, which is usually simpler. Of course if you are mastering material that has been mixed by someone else, getting stems will give you more flexibility in the event of a poor mix.

Technology Focus – On the Move? You Can Still Master!
Mastering hasn’t just made the leap from professional to home studios, it’s now even possible on iOS too. There have been advanced DAW apps on iOS for a couple of years and it’s possible to use insert effects in those, just as on your own desktop, to perform mastering tasks.

Cubasis, Auria, GarageBand, NanoStudio and FL Studio Mobile HD are just some of the apps that will enable you to do this. With advanced technologies being developed for iOS all the time, things such as Audiobus and Inter-App Audio now enable you to stream audio between apps without having to export it from one to the other. 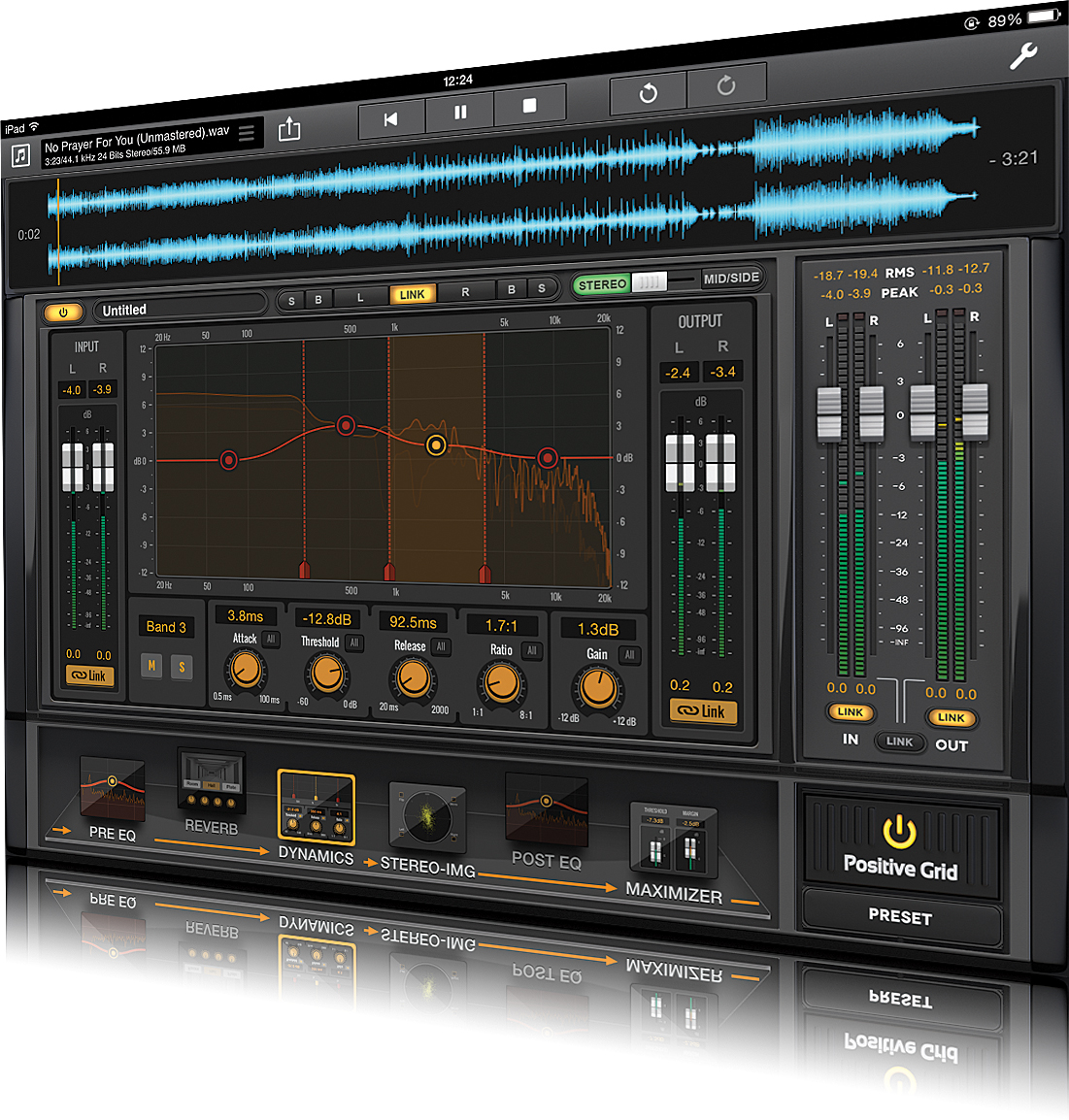 Final Touch is a dedicated and powerful mastering app for iOS.

Perhaps the most interesting development has been the release of a couple of dedicated iOS mastering apps. Positive Grid produces Final Touch (£10.49), an excellent iPad-based mastering solution with a slick interface that has a maximiser, pre- and post-EQs, four-band dynamics, stereo imaging, reverb and dither, and is perfectly optimised for the touch interface.

Far more advanced than you might expect, it has detailed controls for every aspect of the mastering process as well as great metering and comprehensive import and export options for putting music directly online.

Alternatively, an app called Audio Mastering, also for iPad and priced at £8.99, has a more scientific interface but is nonetheless very powerful. It has a parametric EQ, stereo imaging, multiband compressor, reverb, stereo imaging, maximizer, spectral analyser and more, and has basic and advanced control modes.

Just as with your computer you will want to use a proper audio interface and serious monitoring in order to get the best possible results, but it’s interesting to know that you can now master on iPad using very similar tools to those that you would use in your studio.

Starting the Process
You can master in various different kinds of software since it’s really just a case of loading up an audio file and running it through some effects. As you might imagine, though, some apps are better than others. A simple wave editor that can load plug-ins will do in a pinch, but a pro audio wave editor is preferable because it will usually have a more efficient way of handling plug-ins, looping, metering and the like.

Steinberg’s WaveLab for Mac and PC is designed specifically for mastering, and Sony’s Sound Forge is another excellent choice – both have some great built-in processing and editing tools. Sound Forge is now available for Mac too, though it is rather different to its PC sibling. 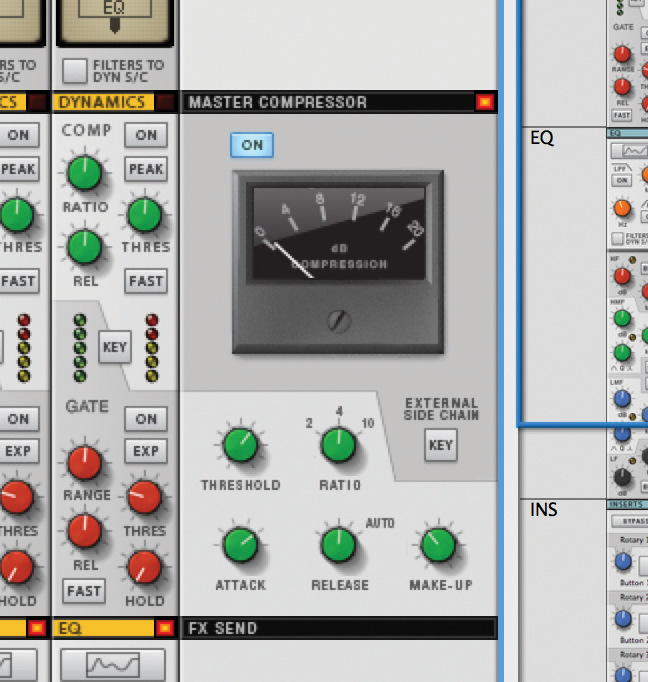 Using master buss compression, such as here in Reason 7, can help to glue a mix together and mean that less compression is required at the mastering stage

Mastering is also possible using your DAW by simply creating a single audio track and then using insert effects on that channel or the master buss to process the mixdown that you import.

Any major DAW will enable this, and as you’re not going to be using any MIDI or arrangement tools the only really important thing to do before you start is make sure the project settings match those of the audio you are importing so that no unexpected format conversion takes place.

Although the vast majority of mastering effects come in plug-in format there are some dedicated mastering apps as well, probably the most complete of which is IK Multimedia’s T-RackS CS, which has some excellent tools and is a staple of many people’s mastering setups.

It’s quite possible to master using the bundled plug-ins that come with your DAW, though these will of course vary in quality depending on how high-end the software is. The core effects you will need are compression, EQ, limiting and ideally some stereo-widening and metering tools as well.

The major DAWs such as Cubase, Logic, Pro Tools and the like come with most of these. Others can be added for free, but if you are doing serious mastering it’s worth looking at some more heavyweight plug-ins. Suites such as iZotope’s Ozone or some of Waves’ plug-ins are great, and not just for mastering but for general tracking and mixing tasks as well.