The Essential Guide to Reverb

Reverb is possibly the most common – and probably most overused – effect there is. But when you hear it when it’s used correctly, it can also be the most beautiful. In the following guide to reverb we’ll help you identify when a track needs reverb and how to do it right… Reverb. It’s all […]

Reverb is possibly the most common – and probably most overused – effect there is. But when you hear it when it’s used correctly, it can also be the most beautiful. In the following guide to reverb we’ll help you identify when a track needs reverb and how to do it right… 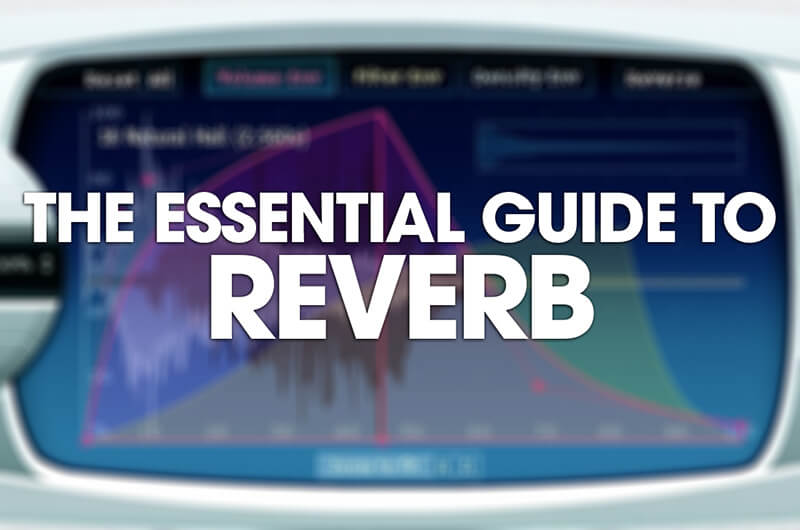 Reverb. It’s all around you, wherever you go (almost). It’s that shimmering effect you hear on vocals, that immense sound within a church or cathedral, or it’s the gentle wash of atmosphere on your synth pads. Reverb is, quite simply, the most beautiful effect you can use, and use it you will – very probably a little too much.

OK, much too much. It’s easy to think that everything sounds good with a touch of reverb… and that’s because it does. But mix all of that together and you won’t be able to distinguish one blurry sound from another, so you’ll need to master reverb to make it work properly, and that is what this essential guide is all about, so…

What exactly is reverb?

It is the sound of reflections. If you make a sound in a room then that sound will reflect back to you, not just from the walls but by objects in the room. If you’re in a small room, the reflection time will be shorter than, say, if you were in Canterbury Cathedral. So reverb is an echo, right? Not quite.

The reflection you hear is an echo but then the sound also bounces around the room, hitting other objects causing early and late reflections so you will also hear those before the sound eventually decays away. The effect of it decaying from the initial sound is the reverberation – it’s all of the echoes combined, if you like, and the character of their demise. What you ultimately hear as reverb is one reverberated effect made from lots of indistinguishable reflections.

Different rooms have different characters and what you put in them will also affect those reflections. At one end of the scale and if you want to record your sound with no reverb, or dry, you’ll have to find yourself an anechoic chamber to get a truly non reverberant sound. (And if you do go in one – they can make you feel very strange with their complete ‘deadness’.) However you can cut down the room’s reverberant effect by using vocal both, or reflection filters or even throw the odd duvet and scatter cushions around to absorb some sound.

But we’re getting ahead of ourselves, as we actually want some reverb as it can add a great ‘shimmer’ to your music and the result can really lift a sound and make it more alive. In a mix, reverb can create a sense of space and depth, sounds having lots of reverb seeming further away than drier, more intimate sounds.

Used well, then, a touch of reverb here or there can add a completely new dimension to your mix. So how do we get reverb? Well we could go to a specific room and record its reverb and, more practically, we could use artificial reverb effect units of which there are many, both in software and hardware. Let’s look at all the options.

Early reverbs simulated the effect mechanically using large plates. A speaker would be at one end of the plates and a microphone at the other, picking up the sound waves made by the vibrations in the plates which would give the effect of a reverberated room. The larger the plate, the longer the reverb time – but these things were big, clumsy and heavy.

Reverb chambers were also an option back in the 1950s which got to the heart of the reverb theory by simply capturing the sound of a room using speakers playing the music and microphones picking up the results of the music played in the room with all of its additional reverberation. You adjusted the reverb level simply by increasing or decreasing the sound going into the room. While these achieved the perfect reverb blend, it still wasn’t a solution for everyone.

Fortunately the more practical spring reverb came along which used an electrical signal that was sent through springs (rather than the mechanical plates). Spring reverbs were built into a lot of early guitar amps and it’s still a commonly used effect, as is the plate reverb, although both of them can now be simulated using digital technology.

Initially digital reverbs came in rack form for studio recording or pedal form for guitarists. The more complex digital reverbs from the likes of Eventide, Lexicon and TC Electronic used highly complex algorithms to simulate room types and are still revered effects today, although most digital reverbs are now available as software plug-ins and many of these emulate those classic plate and spring reverbs.

The EMT 140 was the most popular plate reverb, here emulated by Universal Audio 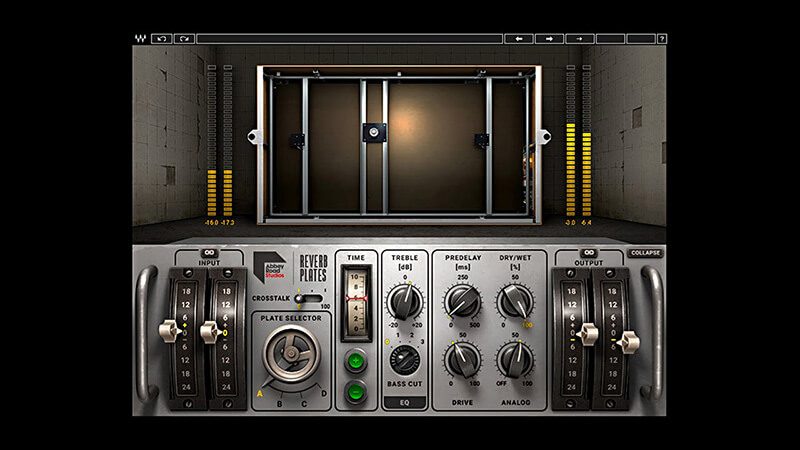 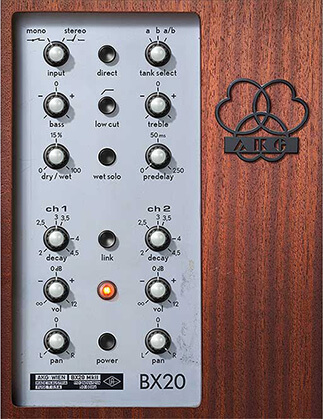 A popular spring reverb was the AKG BX20, here emulated by UA

Software effects are also great at creating completely new types of reverb, not just emulating old ones. Convolution reverbs, for example, can emulate the reverbs within specific concert halls or studios. 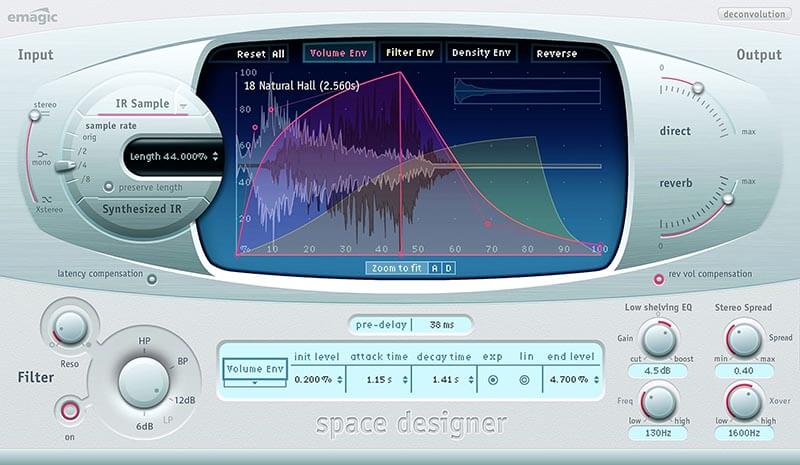 Or how about at the opposite end of the scale, a reverb that can emulate the sound of space that doesn’t exist? Enter Eventide’s Blackhole, a reverb with quite out of this world reverbs.

So as you see, software plug-in reverbs now really cover just about every reverb, both real and imaginary so let’s look at some of the typical uses and the features within a typical reverb.

A step-by-step guide to reverb

We’ll demonstrate how reverbs are used for different functions and look at some of the reverbs available in various DAWs. 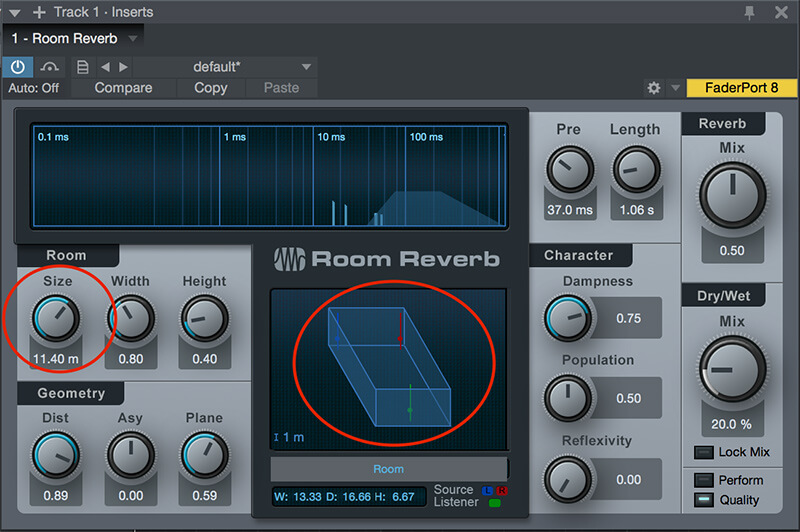 1. Presonus’ Room Reverb is great as it shows the room graphically and you can easily adjust the size of the room to increase the reverberation effect and the length of the reflections and actually see the room size change as you do. 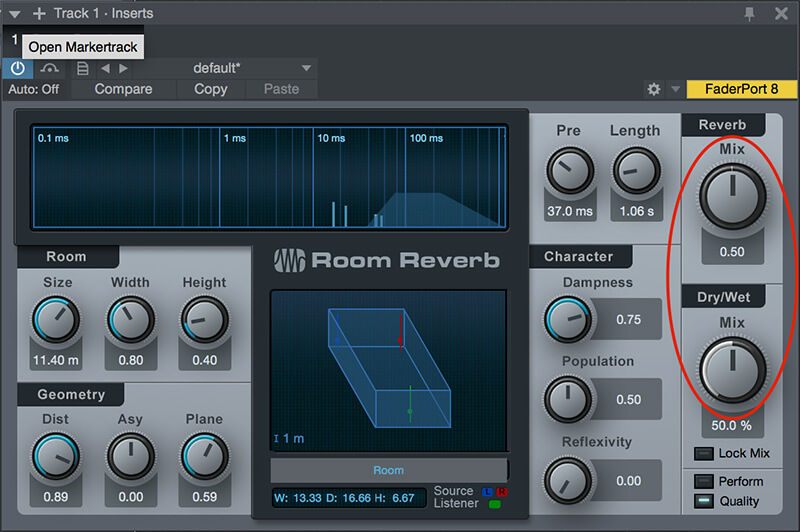 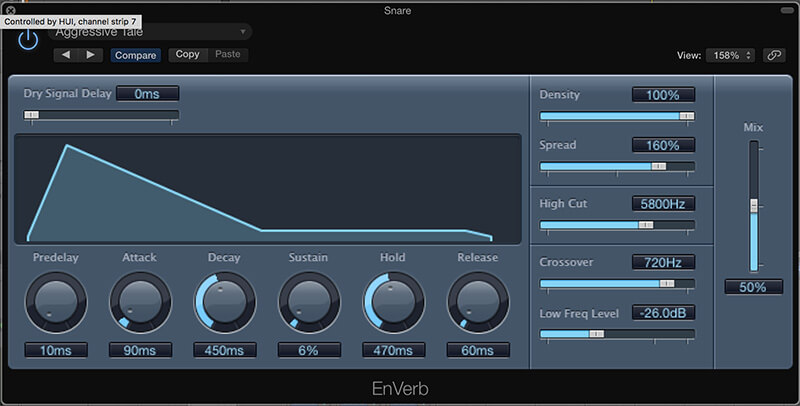 3. Now we’ve chosen Logic’s EnVerb to demo a reverb graphically as it shows the effect of the room reflections over a period of time. The early reflections start off high and then typically fade away – the decay time. Here you can adjust how quickly they fade (Decay dial) and to what level (Sustain). 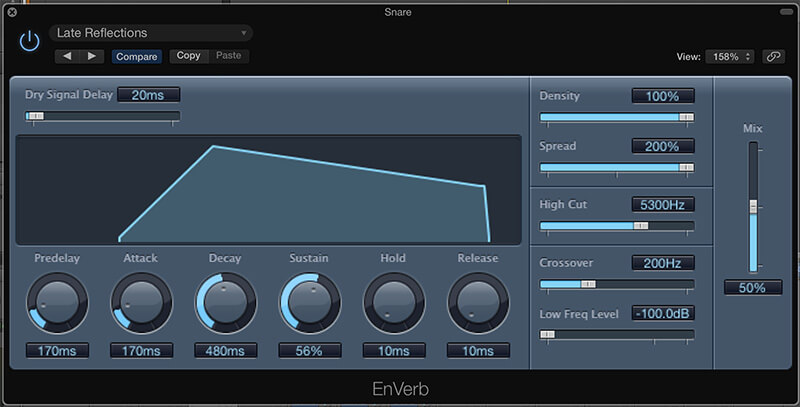 5. Ableton Live’s reverb allows you to set some of the normal parameters we’ve mentioned like Room Size, Mix and Predelay but also allows you to set the Reflection level – as in how much the sound is reflected – and also how much is diffused. 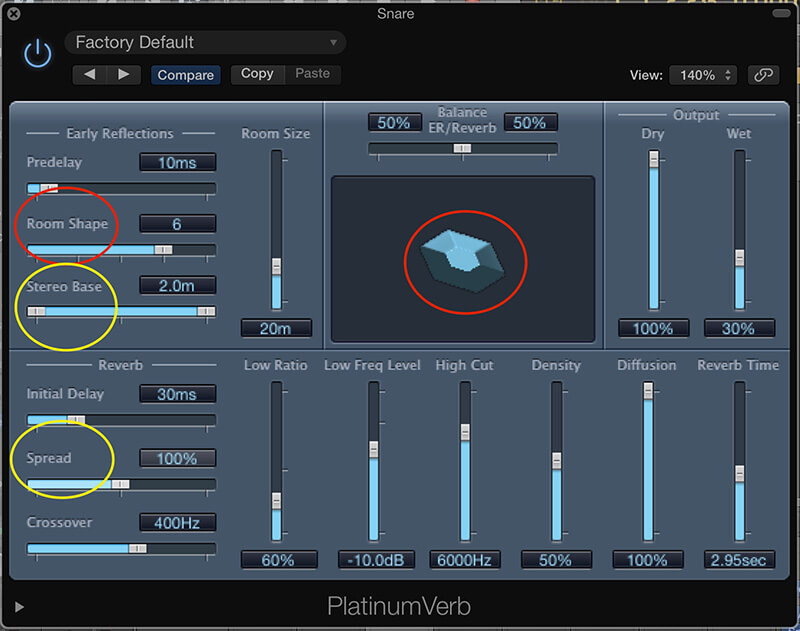