Working ‘in the box’ is far from the only way for producers to make music nowadays. Here’s our complete guide to taking the computer partly – or even entirely – out of the equation The ubiquity of computers in our everyday lives makes it easy to forget that things were not always like this. Anyone over […] 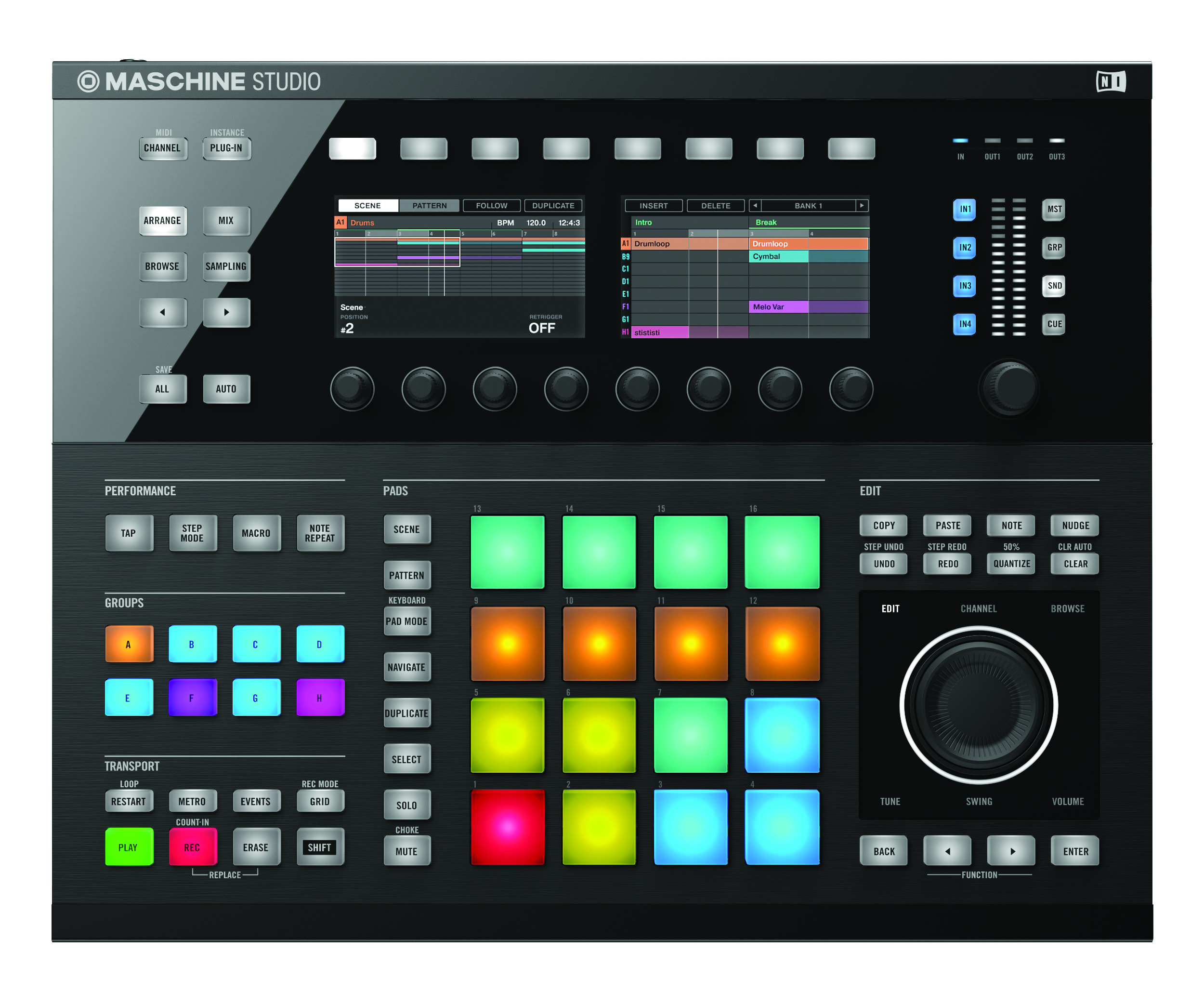 Working ‘in the box’ is far from the only way for producers to make music nowadays. Here’s our complete guide to taking the computer partly – or even entirely – out of the equation 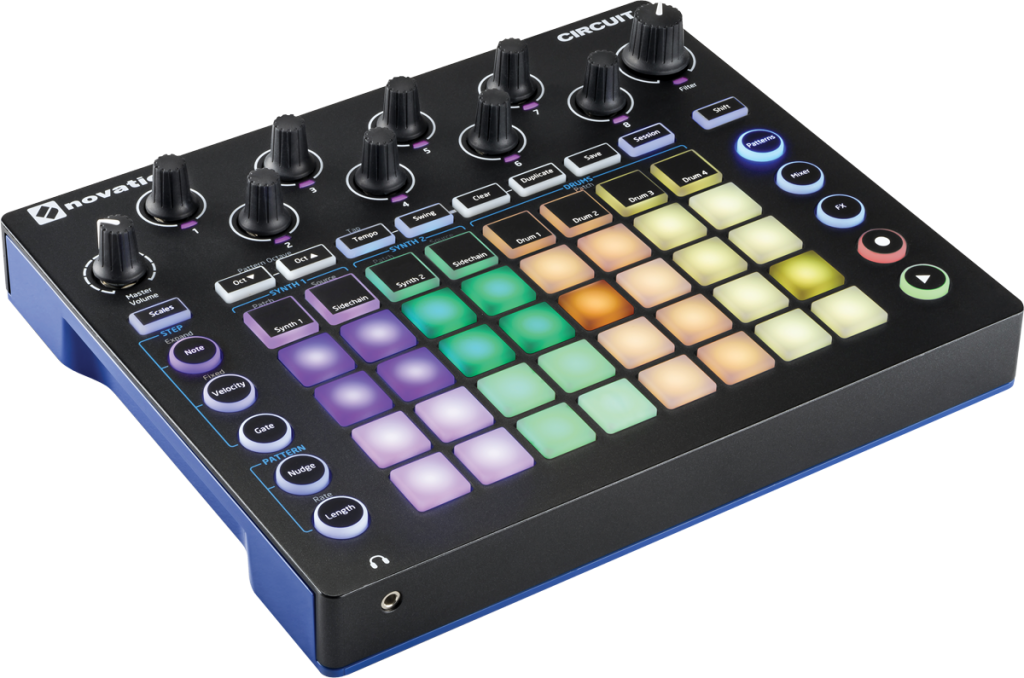 The ubiquity of computers in our everyday lives makes it easy to forget that things were not always like this. Anyone over about 30 will probably have experience of making music entirely without computers. They were things you played games on, typed letters on and later, connected to the phone line using a modem.

But they most definitely were not up to the task of serious music production. Indeed, it was only in 1979 that the first cassette-based tape Portastudio was released by Tascam. And if that’s earlier than you would’ve guessed, at the time it still cost 1,200 Canadian Dollars, putting it out of reach of many people.

It would take until the late 1980s for Portastudios to make recording available to a much wider audience, and even then, it was distinctly lo-fi by today’s standards. If you wanted something to sound great, you still had to go to a studio, where the setup would include professional tape, DAT or perhaps hard-disk recorders.

For a while, in the later 1990s and much of the 2000s, computers became more dominant as they became more powerful and cheaper, and software started to become the default way to synthesise, program and record music. Working ‘in the box’ was much cheaper and could be done in a spare room at home, rather than requiring racks of outboard.

A decade or so ago, however, the pendulum began to swing back towards hardware in many areas of music production. It hasn’t been a decisive or dramatic shift all the way back to hardware, but instead has become more of a rebalancing of the way people approach production. The reasons for this are manifold, and touch upon several different factors.

As software has become incredibly powerful, the mouse has been exposed as a less-than-perfect way to interact with instruments and DAWs with all their new functions. Hardware controllers have evolved to mesh perfectly with software: NI’s Komplete Kontrol and Ableton’s Push are just a couple of examples.

This is partly down to the fact that this stuff has only become technically possible in the last few years. Touch screens, velocity-sensing pads and tablets have all fallen in price, making it possible for manufacturers to include them in products that don’t cost the earth. Some people also perceive hardware as being more authentic or credible than software. Not just in the sense that it’s preferable to have a real Moog than a software one, but also because having a physical product is somehow more tangible.

Again, more accessible prices have increased the appeal of hardware from when it mostly consisted of the kinds of mega-synths you couldn’t possibly afford a couple of decades ago. So even if you’re not a hardware junkie, we’re at a point now where hardware is most definitely re-established in music production – often in conjunction with software, it’s true, but it looks like it’s here to stay. 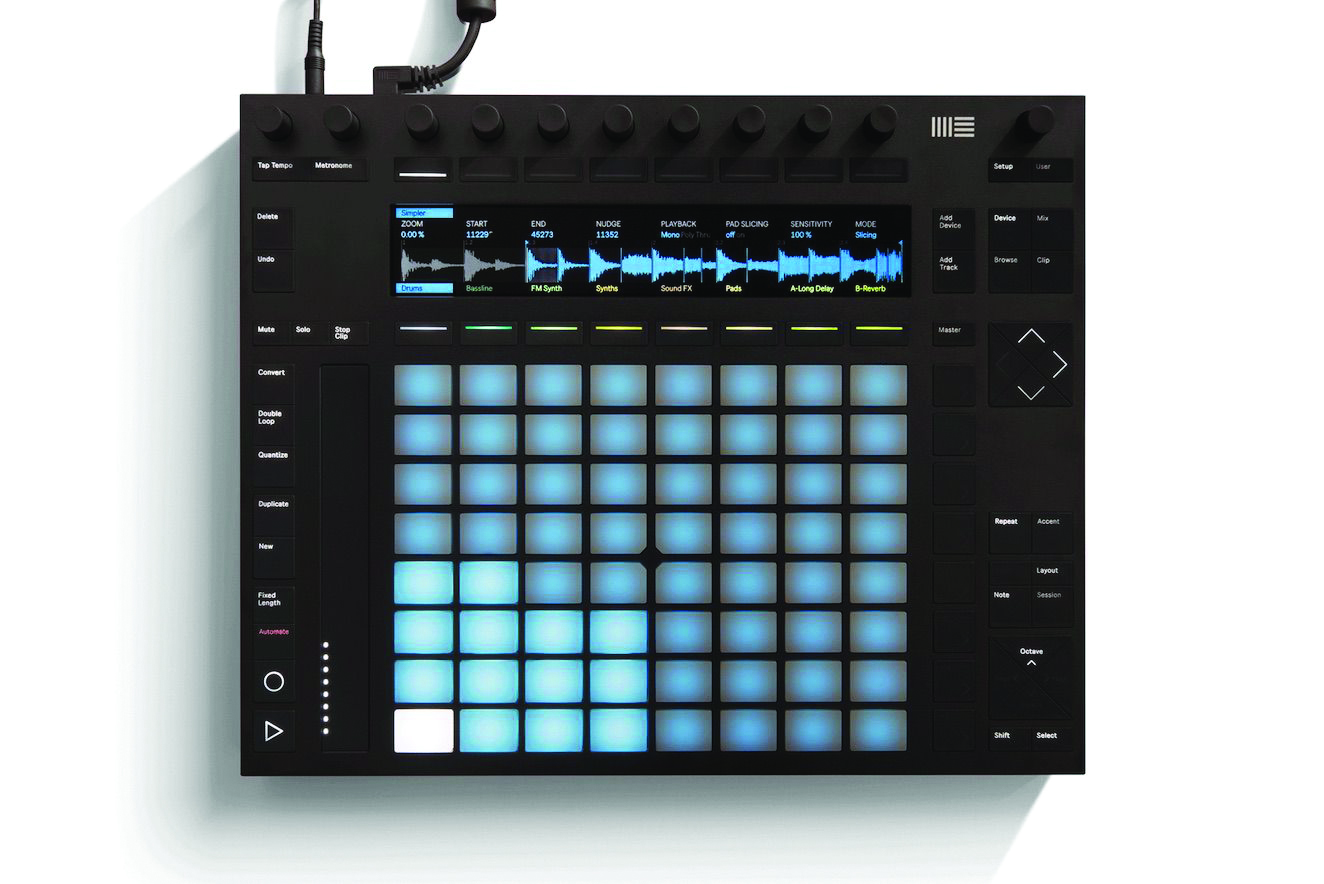 You’ve heard of going ‘off the grid’ – but for increasing numbers of musicians, the grid is actually very much where it’s at…

If you actually stop to think about it, the mouse and computer keyboard are very limited tools for interacting with something as advanced and multi-functional as a modern DJ app, DAW or drum machine.

They essentially do one thing at once, and you have to look at the screen to figure out where to click next. It’s no coincidence that pro mixing desks and modular synths have hundreds of physical controls, and a DJ mixer-plus-turntables a fair few as well. In the move to software, much of this tactile, hands-on control fell by the wayside in the excitement over being able to have a bunch of synths and effects on your hard drive, rather than taking up a whole room.

You only have to look at the history of step sequencers and drum machines and compare their design with modern grid controllers to realise that there’s obviously something familiar and intuitive to humans about a grid of controls.

To begin with, drum machines laid out their sounds across a grid of pads, and classic hardware units like Akai’s MPC60 did a similar thing with user-edited samples. The way talented producers interacted with the layout of these kinds of modules had a tangible effect on a whole new way of making music, from RZA’s sample-based hip-hop to DJ Shadow’s Endtroducing. If they’d been arranging blocks on a computer screen, who knows if their styles would have developed in the same way?

Early Days
When grid controllers started to appear on the market, they were largely intended to use templates or for building MIDI maps for triggering your software of choice.

It’s become more commonplace to see grid controllers designed to work mainly with one piece of software. They lend themselves to a certain way of working, so you’re not likely to see one for tracking in Pro Tools, for example, because that’s a very different workflow. Often, hardware and software need to be developed either by the same company, or by two companies working very closely together.

The most obvious example of a DAW that’s very well catered for is Ableton Live. Thanks to its clip-based approach and use of scenes, it’s perfectly suited to a grid of hardware controls for launching and modifying clips. Over time, controllers from Akai and Novation, such as the MPD and Launchpad series respectively, have become more advanced at controlling Live. Eventually, Ableton developed and released its own controller, Push, recently upgraded to version 2. 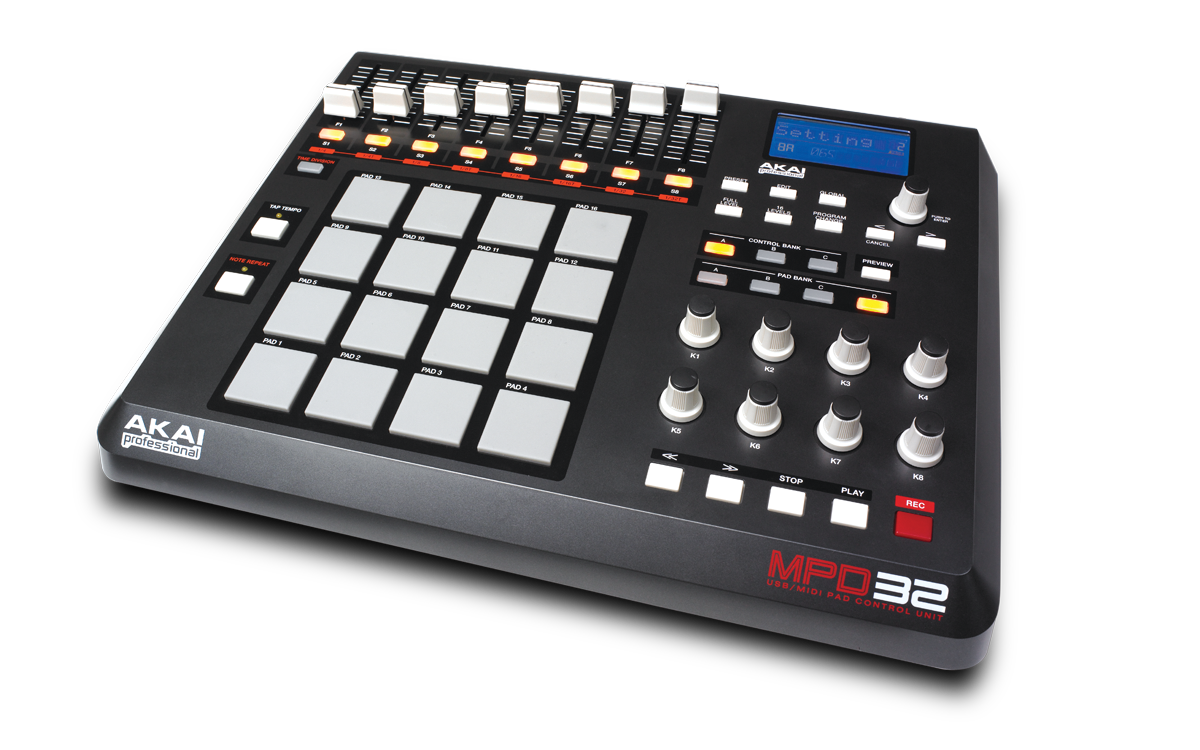 Total Control
Controllers such as these work by sending MIDI data to a computer running the software and by showing visual feedback about what the user is doing.

Depending on the model in question, they can even allow almost total hands-off operation – which is the holy grail of ‘controllerists’, or even just people who like to work in a more tactile way. One of the best examples of this is NI’s Maschine system, and specifically the Maschine Studio model, which has a ton of controls for beat making, programming and even sampling and editing, without ever going near your computer.

Grid controllers are often touted as performance tools and while they’re excellent for live performance, many people find their supremely interactive workflow means it can be preferable to record and sequence with them as well, especially when there’s a high degree of integration between the hardware and software.

You don’t just play notes: you can load instruments, edit samples, change effects and so on. There are many smaller controllers available at fairly low price points, too: Arturia’s BeatStep Pro, for example, is a controller and sequencer and is designed to work not just with your computer, but with hardware both old and new.

With USB, MIDI, CV/Gate and DIN connections as well as touch-sensitive knobs, touch-strips and eight separate drum-gate outputs, it’s a perfect example of how hardware is expected to do more than just one thing these days – and how people don’t always want to buy three devices when one can do it all. Convergence and integration are the way things are going – great news for musicians.

Grid Locked?
Grid controllers have gone from being a novelty to something much more serious. Developers have built ever-deeper hooks between controllers and their software, to the extent that some people would find it very limiting to try to use Live without one, say, or the Maschine software without a hardware unit attached. Although they’re generally designed to work with a specific app they can almost always be switched into generic MIDI mode at which point they become usable with any software and indeed any hardware, so even your dusty old workstations and synths get a look in. More importantly, they can often provide a bridge between the old and new worlds, linking the latest DAW to your oldest synth in a way that makes sense.

Four of the Best

• Web www.native-instruments.com
• Price £729
Probably the ultimate grid controller, Maschine Studio is the largest member of the Maschine family and as you might expect, is geared to work seamlessly with the Maschine software, although it can be used in generic MIDI mode as well. With almost every command available on the hardware itself, it really is a hands-off way to use Maschine on your Mac or PC.

• Web www.arturia.com
• Price €249
Arturia’s BeatStep Pro expands greatly on the regular BeatStep with a multiplicity of ways to send MIDI, CV and Gate signal in and out, providing a way to bridge your software and hardware worlds. It’s compact, and even has touch-sensitive controls. You don’t often get such extensive connectivity in a unit this affordable.

• Web www.ableton.com
• Price €778
Completely dedicated to Ableton Live, Push 2 is a sleek and powerful grid controller, which gives you hands-on control of almost every aspect of a Live set – from recording and sequencing, to editing instruments and effects and mixing. It’s designed to be as much about live performance as studio recording. 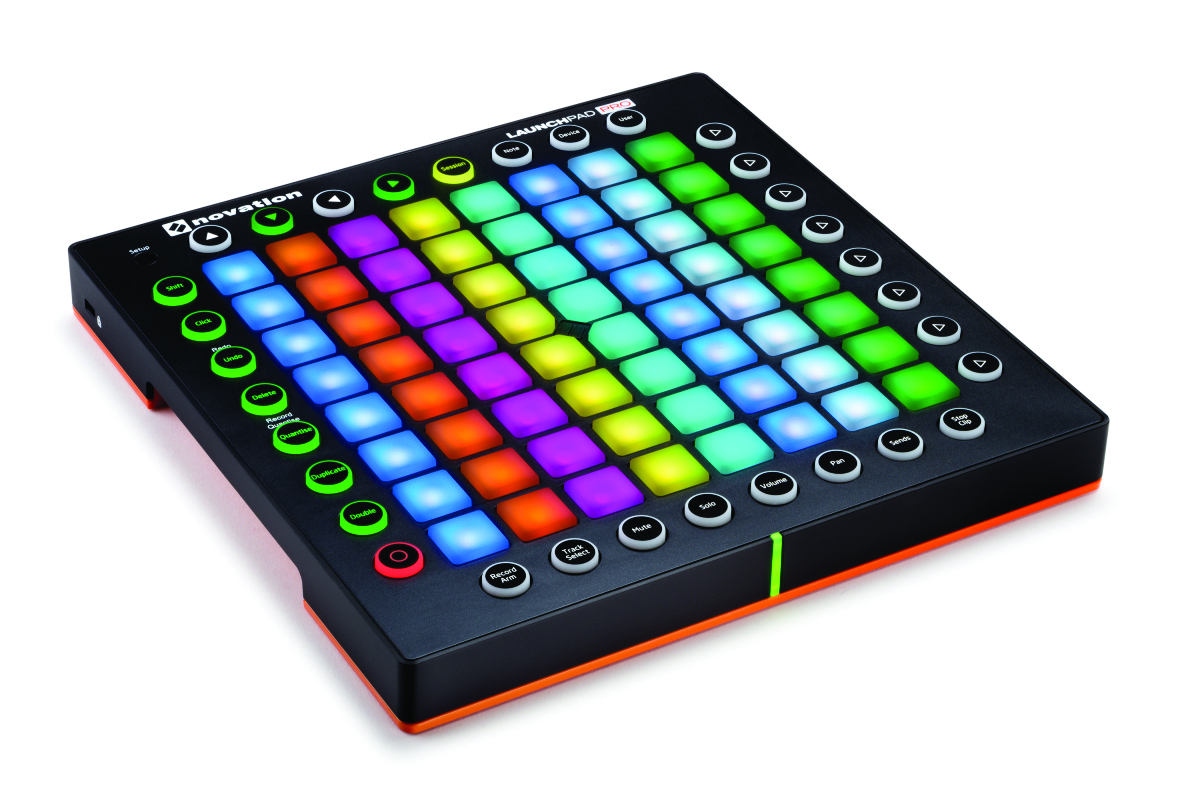 • Web www.novationmusic.com
• Price £199
The largest of the three hardware Launchpad models, Novation’s hardware controller is designed to work with Live, but can also be flipped into MIDI mode to work with any other software or hardware. If you prefer something even more portable, smaller models are available as well.