Beginner’s Guide: Everything you need to know about controllers

We’ve looked at the software and inbuilt instruments you can use to create music, but to get the best from both, controllers are a must. 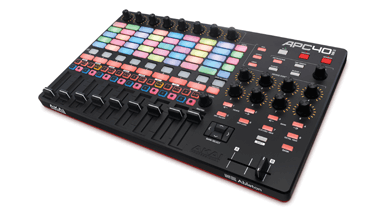 As we‘ve seen, software is at the centre of music production. The DAW (Digital Audio Workstation) is the central component, the engine if you like. Here, you take your sounds – either generated by the computer itself or recorded from the outside world – and you manipulate them, arrange them, turn them into a tune, and everyone is happy.

Within the DAW, you have software instruments and effects to help you create, mix and edit your tune (so lots of software all round), but the ideal studio has a piece of hardware to control them all and it’s called, guess what… a controller!

How do controllers in music production work?

The controller was born out of a fairly twisted and odd part of music-production history. As computers became ultra-quick at the turn of the century (or so it seemed back then), more and more music production was done ‘in the box’, ie, in a computer. Software instruments and effects were born and it became something of a dream to run everything in this new ‘virtual studio’.

That dream was realised and today, you can literally run everything that used to be run in a hardware recording studio, in software. “Hurrah!”, everyone said, and then realised that something as creative and tactile as music production was actually a bit rubbish when all done within the virtual four walls (six walls?) of your desktop or laptop.

Yes, many do happily produce within that environment, but many more also prefer something to play, twist, fade and turn that is hardware – and, perhaps more importantly, something that is not a mouse. So the irony is that the hardware controller was born to control the software that eliminated a lot of hardware in the first place. We are a fickle bunch, aren’t we?

The role of MIDI

Controllers use a music-technology digital language called MIDI (Musical Instrument Digital Interface) to access and control your software. MIDI records how long you press a key and at what pitch, plus what dials you are turning and assigns that info to your software instrument or DAW.

All you really need to know about MIDI is that your controller will have a MIDI Out – either a five-pin DIN socket, or the connection is made via your USB socket – that connects to your computer interface, so that any tweaks and presses you make on your hardware will be picked up in your software.

Another area of music making that has also exploded over recent years is the mobile, touch and iOS market. Those pesky tablets, phones and iPads are perfectly good central processors to run mobile DAWs, touch-screen synths and effects but, of course, many want to interact with these devices with hardware – so some hardware controllers have been designed to control apps.

Again, the irony is not lost on us: apps to help you go mobile now became weighed down with extra hardware, but the truth is that people use these ‘mobile’ devices just as much at home as they do on the bus or train, so perhaps extra hardware around your touch device is not as limiting in that production scenario as it may initially sound.

Anatomy of a controller keyboard 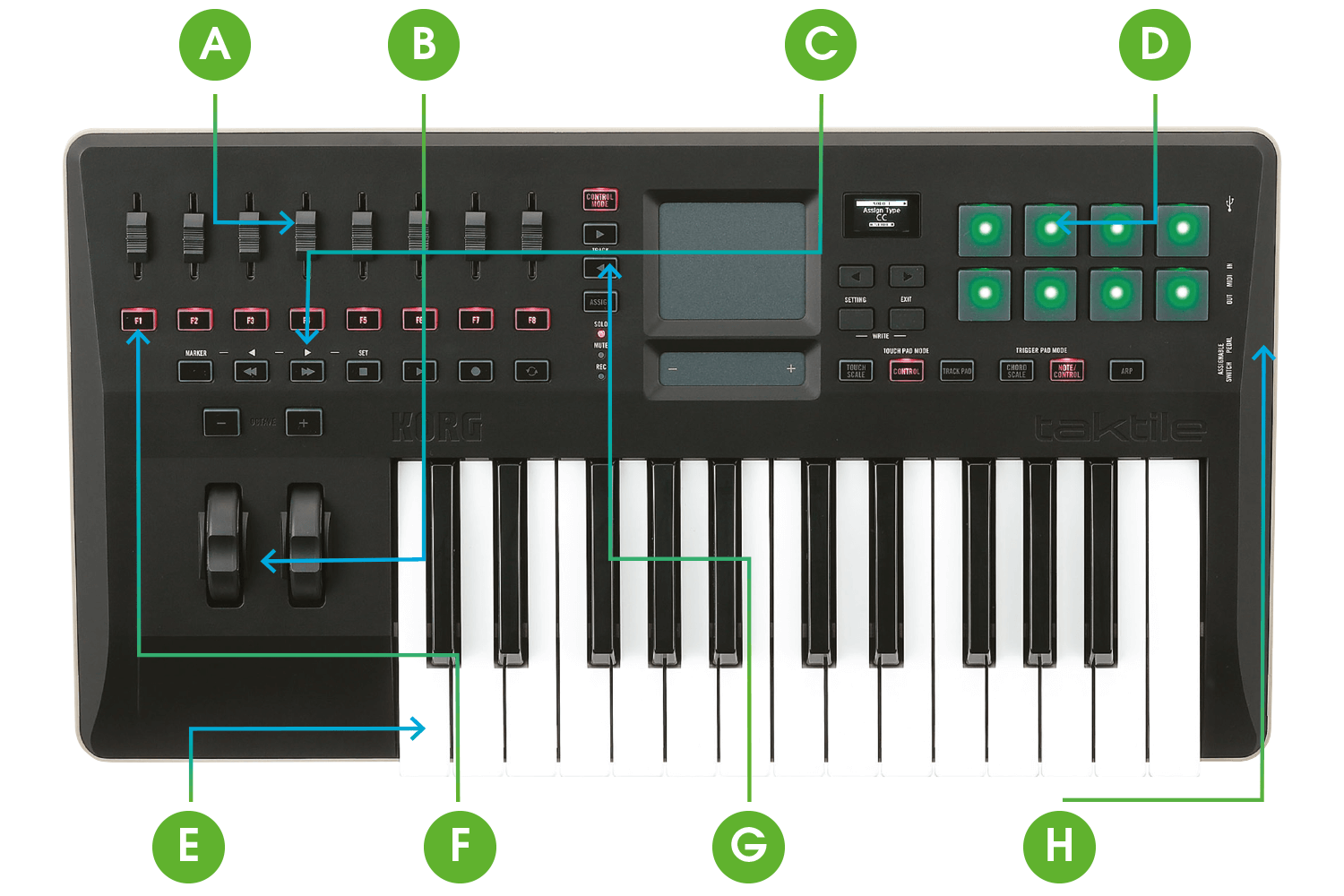 It’s often true to say that any controller – knob, slider, button, etc – can be assigned to any task on a good controller. Yet some are best assigned to standard functions. Sliders like these, for example, will usually be assigned to virtual mixing.

B) Make sure you have these!

No controller keyboard is complete without a pitch-bend and mod wheel. The first adjusts pitch and the second can be assigned to anything, depending on how you press the keys. Make sure you have octave up and down buttons, too.

A decent controller – or at least one aimed at controlling your software DAW – should have Transport buttons that you can assign to the Play, Fast Forward, Record, and Rewind controls of your chosen software.

Some controllers include ‘launch’-type pads which, as we say below, might be used either to launch clips in software like Ableton Live, or record drum beats with percussion software.

Often, controller keyboards are released in 25-, 49- and 61-note sizes (this is a 25) to cater for all players. Sometimes, you might get an 88-note weighted version (as in Native Instruments’ Komplete Kontrol) for professional players.

Many keyboards come with buttons that you can assign to anything you want. So for example, you could set up a keyboard shortcut within your DAW that can be accessed with a quick tap of
one of these.

If you think that eight controls – like the sliders on this keyboard – won’t be enough for your needs, don’t worry, as many keyboards come with Shift-style buttons to assign these to another eight tracks.

All controllers use onboard MIDI connections to connect to your computer interface. There will be no audio connectors, as MIDI controllers make no noise (usually)!

How many types of controllers are there?

So, we’ve seen a new market for controllers emerge over the last couple of decades, but what shape and form do they take? The most common is the keyboard controller, a standard piano-type affair that varies in size, number of octaves and certainly price. Keyboard controllers come in standard 25-, 49- and 61-note options. You can also find a rarer 88-note controller keyboard that might come with a ‘proper’ weighted keyboard for experienced keyboard players, although the notes on smaller models are usually pretty good for playing, too.

The keyboard controller has actually been with us for longer than most other hardware controllers have been, and was born in the late 80s, designed then as a pure MIDI (Musical Instrument Digital Interface – the communication standard for digital music) controller to play hardware synth modules. Nowadays, it still uses MIDI at its heart to play everything – from software synths on desktop machines to apps on iOS machines.

Despite the image that their name conjures to mind, keyboard controllers don’t usually just have those traditional black and white keys. Increasingly, they also come laden with other knobs, bells and whistles (okay, it’s mainly just knobs), and the majority include rotaries that let you turn virtual knobs on screen (the volume level of a virtual instrument, or the frequency dial of a soft synth, for example); or faders that let you push values up and down, used most often to set the levels in your onscreen virtual mixer. There may also be knobs which you can assign to keyboard commands or use to launch samples – see below.

Many standalone hardware controllers just feature these knobs and faders – minus the keyboard – the thinking being that not everyone will need the keyboard part, and that these can therefore be made smaller to be used next to a computer keyboard without taking up too much valuable desk space in your studio.

Then the grid was born

As music software developed and evolved, so the hardware controller has had to keep pace. More loop-based software, such as FL Studio and Ableton Live, demanded a different type of controller, so the grid-based hardware controller was born. Often an eight-by-eight grid of buttons or pads, this type of controller is ideal for triggering the clips used in Ableton Live. These actually take a lot of their design ethos from early Akai MPC and Roland TR drum machines, which used a grid-style hardware sequencer to program grooves and beats.

These grid or pad controllers can also be used to create beats and melodies from all sorts of other software; not just loop-based DAWs, but software drum machines and groove boxes. The ultimate grid-based controller – something like Ableton Push (see over the page for a detailed overview) – is designed to do it all. It can control the DAW, create beats and melodies and even becomes a performance attraction live, becoming something of an instrument in itself.

The grid controller has also evolved in other ways as well – by way of the MPC and the bog-standard MIDI controller – to be, in some cases, a fully functional hardware melody maker that doesn’t require a computer. All of the sonic music-making stuff is built into machines like Novation’s Circuit or Akai’s MPC Live to make standalone music makers, but we’ll save those machines for another day, as they’ll likely muddy the pure ‘control’ water.

Anatomy of a grid controller 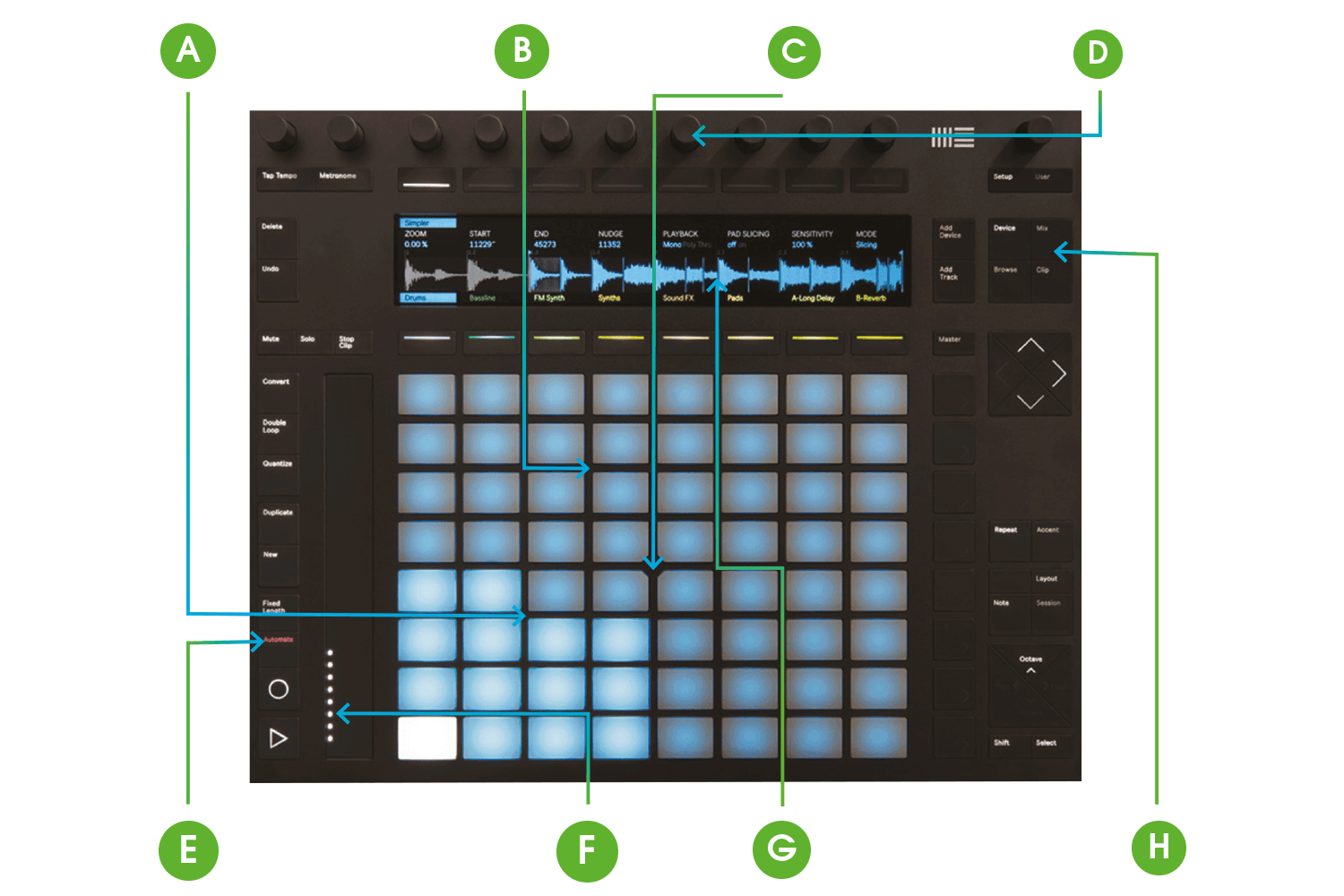 We’re looking at perhaps the ultimate grid controller for Ableton Live: Push 2. With this, you use a 4×4 section of the grid to input and record beats, with different sounds assigned to each pad.

Or you can input beats, step by step, with this sequencer by simply selecting your sound and placing it over these 32 steps.

C) Doubles as a keyboard

Grid controllers like Push allow you to input notes by way of the pads, although Push has lots of scaling options to do this.

On any decent controller, you will get these and they will be assignable to different parameters and hot-key presses.

Every controller, whether grid or keyboard, will have transport controls to stop and start your sequencer/DAW.

As with keyboards, look out for faders on your grid controllers – although Push features a touch strip that can be assigned to just about anything.

Controllers are progressively featuring better screens, in this case to edit audio… although all of the actual processing is usually done in your computer.

Many grid controllers like this are used specifically for Ableton Live, so have very specific functions for that software.

The circle is Komplete

‘Integration’ is the key word now and is likely to be the future of control. The hardware controller has developed so much that a few years ago, it became all about controllers being more independent from the computer, all about looking less at what is on the computer screen – as all of the information you need is now given to you by way of your controller’s screen.

So hardware like Native Instruments’ Komplete Kontrol S Series and Maschine, and Akai’s Advance Series convey a lot more about what the computer – still at the heart of the studio setup, but more invisible – is doing.

Native Instruments’ Kontrol series even goes as far as replicating the different- colour piano keys – as used by its Komplete Ultimate software and other Kontakt instruments – in hardware, by lighting up the individual hardware notes in a technicolour array.

In recent years, the controller has evolved in other directions. So you get more performance-orientated devices that can be worked into a live performance, but few have taken off in a big way. The future of control possibly lies in virtual reality: some kind of haptic, sensory Matrix-style affair where you’re pressing thin air while seeing your virtual studio inside a plastic hat.

We’re not completely sold, as people still like to actually touch stuff – which is why hardware control is with us today – so we’ll probably see even more blurring between the software you use at the heart of your studio and the hardware you use to interface with it, as the manufacturers of controllers strive for ultimate integration.

We have a bumper selection of controllers over the following pages and they come in many shapes and forms, but don’t worry, as we’ve tried to make it as simple as possible. There are still two main types: grid and keyboard.

Most connect up to your computer via USB and use the MIDI standard and will play right out of the box (although to be used with specific DAW features, you may need to load up templates – see the step-by-step guides).

A quick note about mobile. Some manufacturers have designed their devices to be as small as possible to be used with iOS, but you may need to get a Camera Connection kit – so do check when buying whether one is included. Happy controlling!