Best Experimental Apps With their touch capabilities, tablets, phones and iPads are open to all sorts of experimentation. Here are the best 10 apps for getting creative… Yamaha TNR – i The Yamaha TNR-i is based on the remarkable Tenori-on hardware and works in essentially the same way, just on your iPad. It’s a new […] 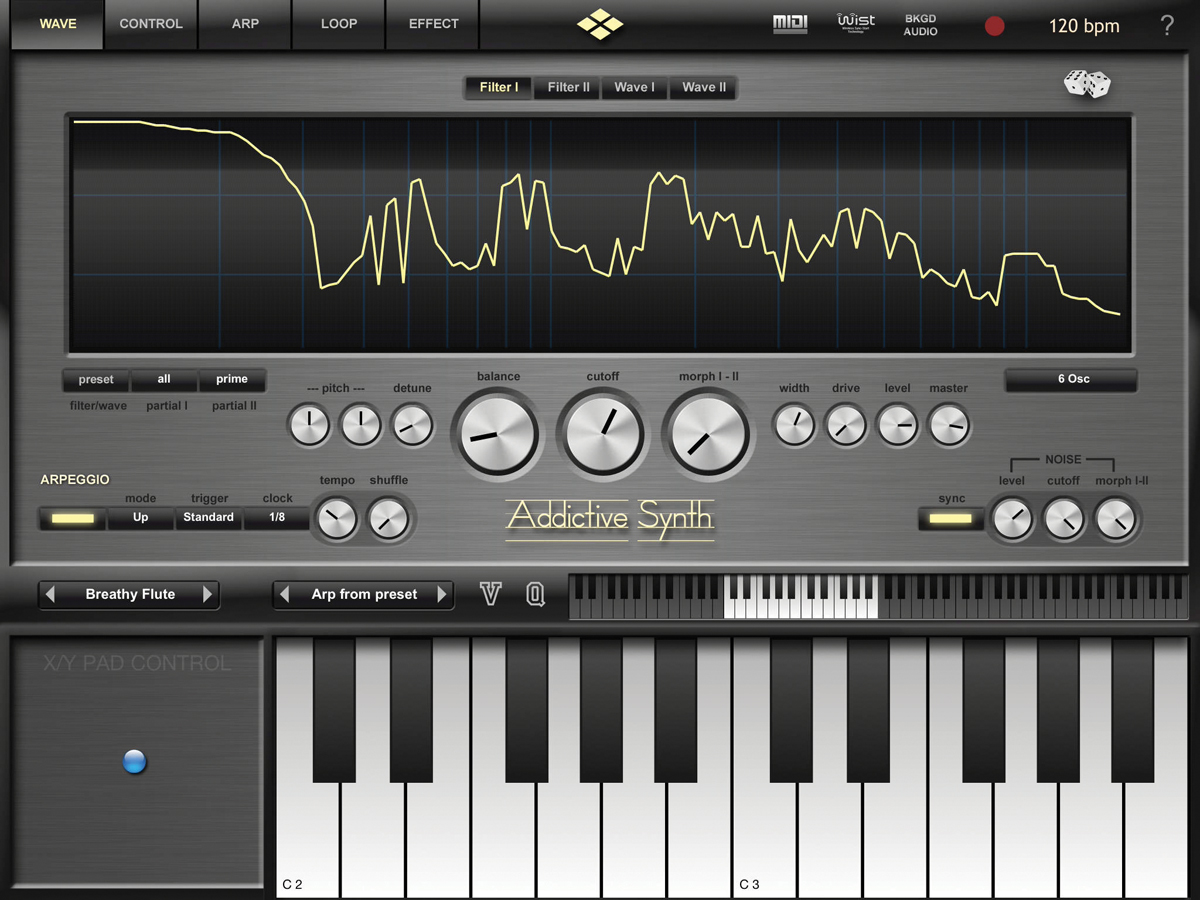 With their touch capabilities, tablets, phones and iPads are open to all sorts of experimentation. Here are the best 10 apps for getting creative… 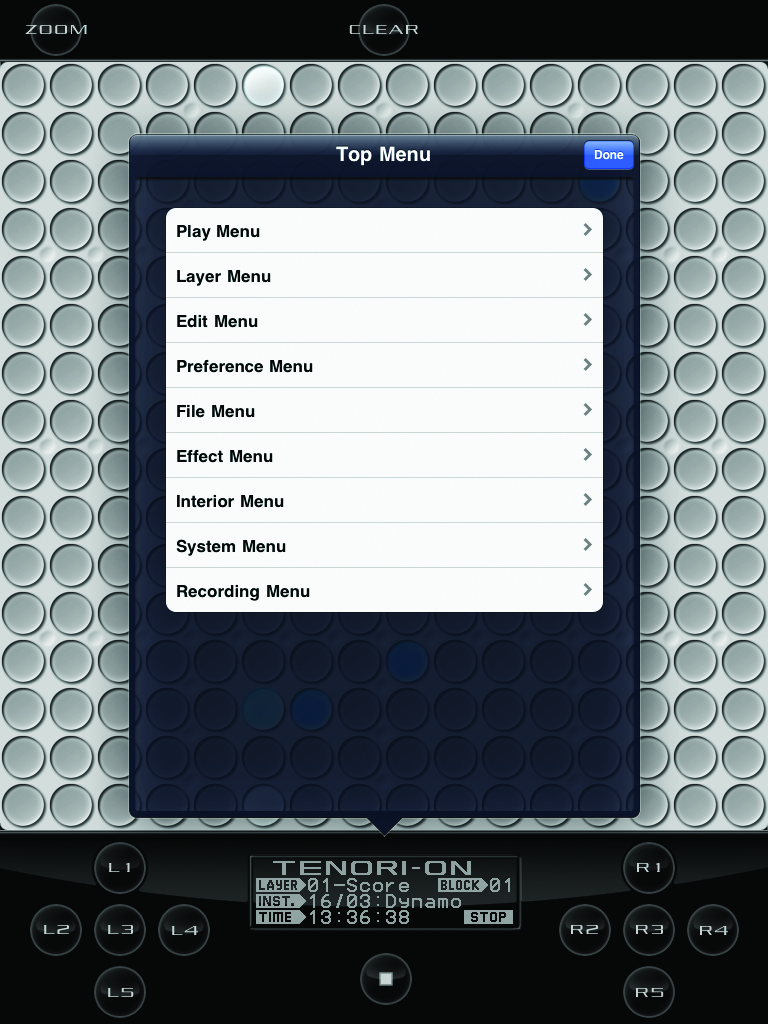 The Yamaha TNR-i is based on the remarkable Tenori-on hardware and works in essentially the same way, just on your iPad. It’s a new way to make music by pressing buttons on the 16×16 grid, not just to enter notes but also to program all kinds of other parameters.

There are modes to randomise parameters and clever features such as networked collaboration sessions, file sharing online, and audio recording and upload to various online hosting services. The app is much more affordable than the hardware and offers a very similar experience, so it’s a great way to experiment. 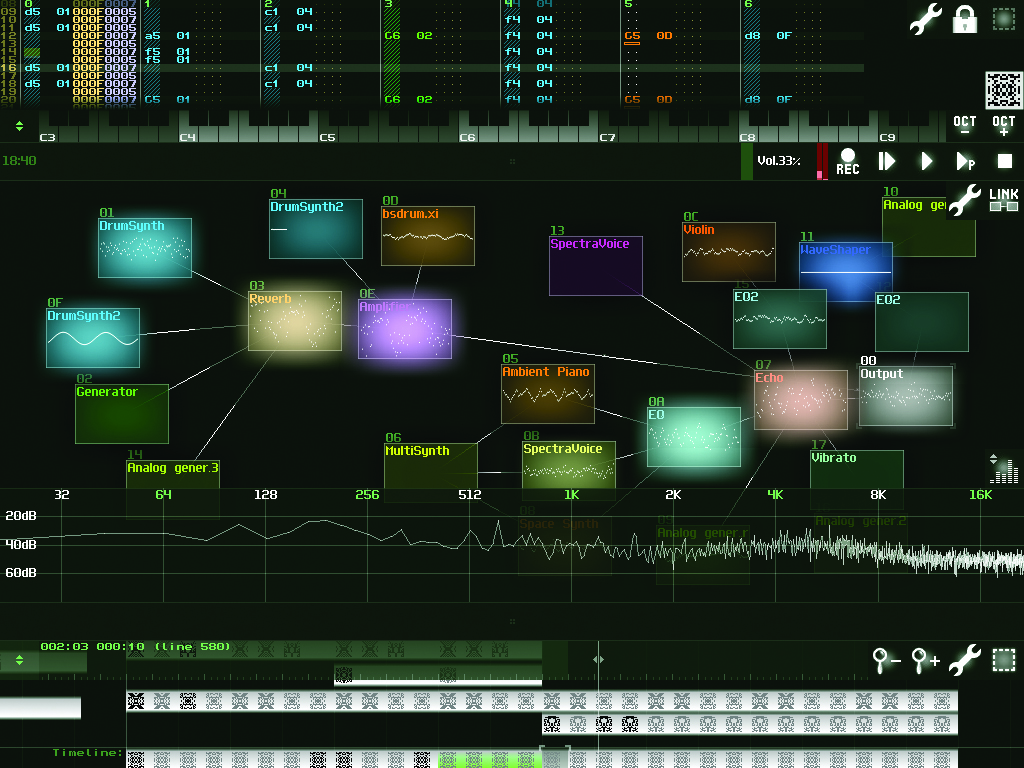 SunVox is a modular synth with a pattern-based sequencer. Not for the faint of heart, it has a modular interface and multiple synth algorithms as well as supporting up to 32-bit samples. It has multitrack WAV export as well as Wi-Fi and MIDI in and out, line-in real-time recording and Audiobus support.

You also get multiple synths and effects including an analogue generator, FM synth, MetaModule for building your own synths and effects, an FFT-based synth, sidechain compressor, distortion, echo, EQ, reverb and more. It’s pretty advanced but if your tech skills are up to it it’s an inexpensive way to build instruments. 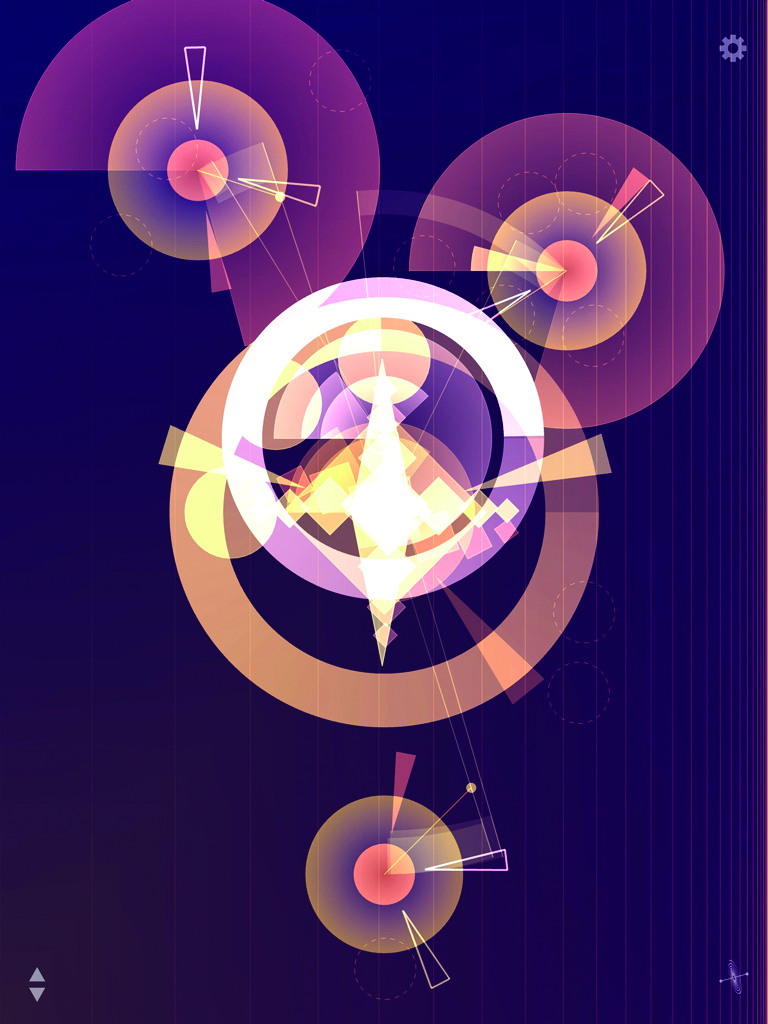 The TC-11 is a fully programmable multitouch synth for iPad that includes 120 presets and unlimited user patch slots. Using touch and the movement of your device for input, it has 23 modular synthesis objects and 22 oscillator waveforms, three controller modules and full display customisation.

There’s also built-in recording and AudioCopy support. There are no onscreen knobs, keys, or sliders; all synthesis is driven by your multi-touch performance. Although it’s one for the more adventurous musician, the unusual method of interaction makes this one of the most unique mobile synths around. 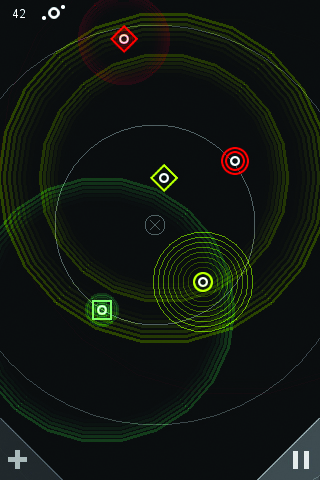 The synthPond is a relaxing spatial sequencer and generative audio toy. Unlike a normal sequencer, you place nodes in a field; it’s approachable and intuitive, but also fairly deep. So while it’s easy for someone with no musical knowledge to create a complex melody, synthPond is also suitable for advanced musicians who are interested in generative composition. The sounds can be placed in a 3D space, occurring around the listener. 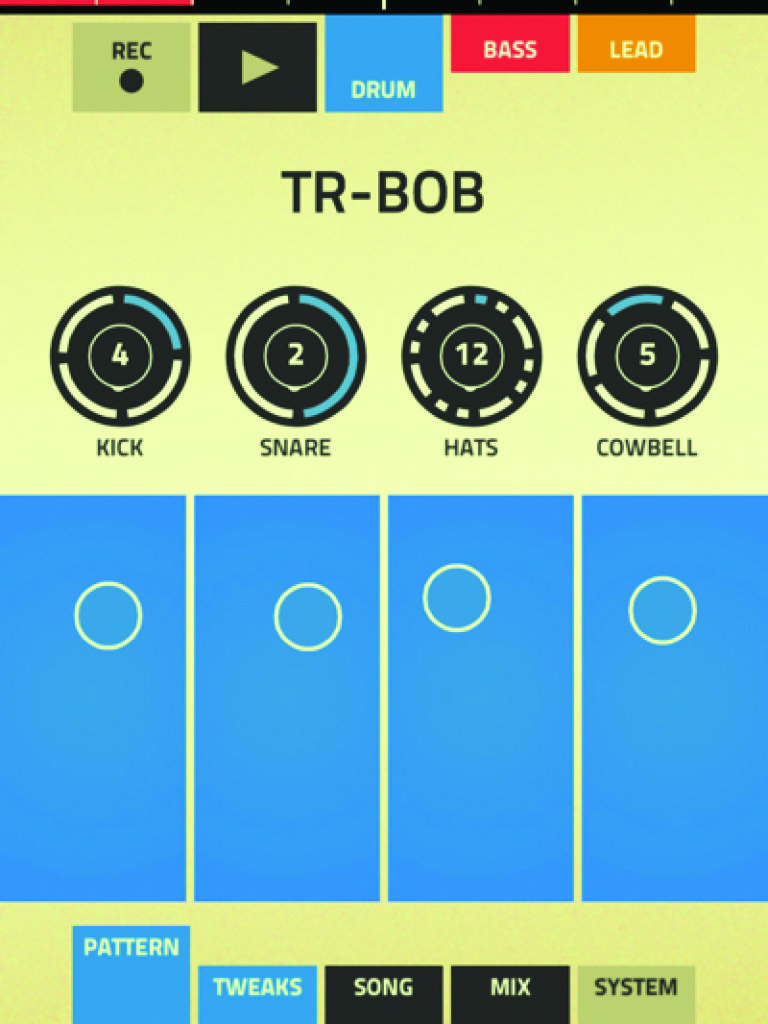 Figure is rather more experimental than what most big developers would come out with: an app designed for instant gratification and quick pattern creation. You program drums, bass and lead synths by tapping on XY grids and amount sliders.

It’s all about sliding and tapping, altering pitches, patterns, tempo and intensity of the various parts. It’s a fun way of generating music on the move. 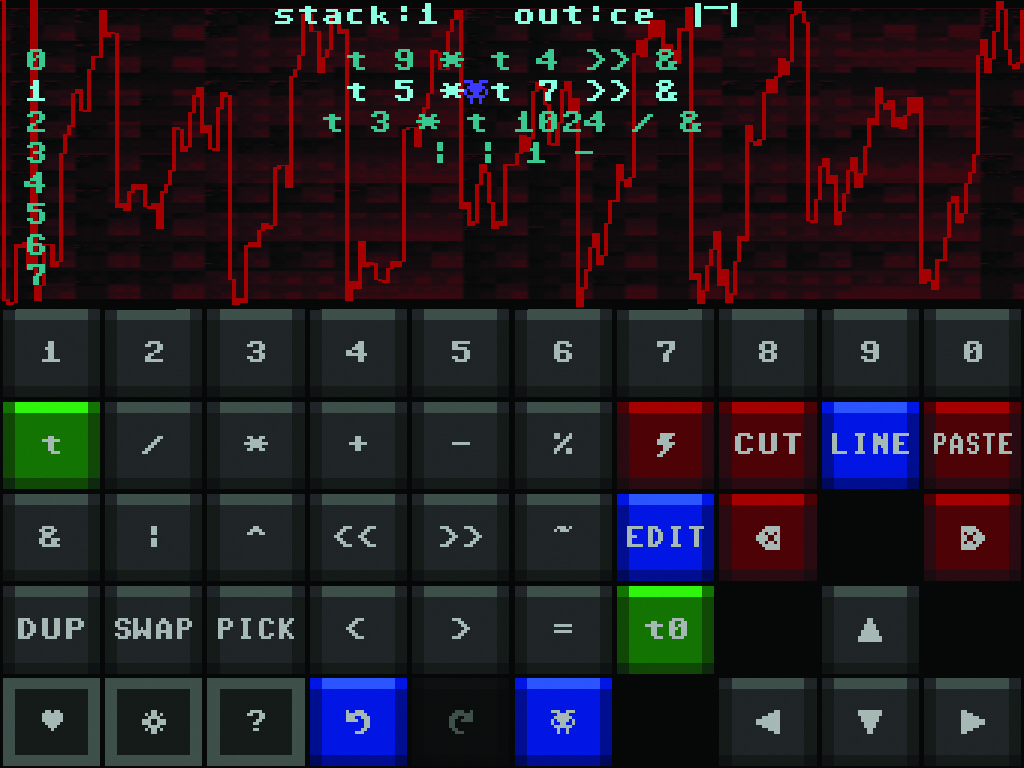 Glitchmachine is a generative music synth that edits expressions live to produce sound interactively. It’s pretty advanced stuff and features interactive live code editing and code line muting as well as waveform and data visualisations to do its thing. It’s worth checking out the website for an idea of the lo-fi glitchy stuff this app is capable of. 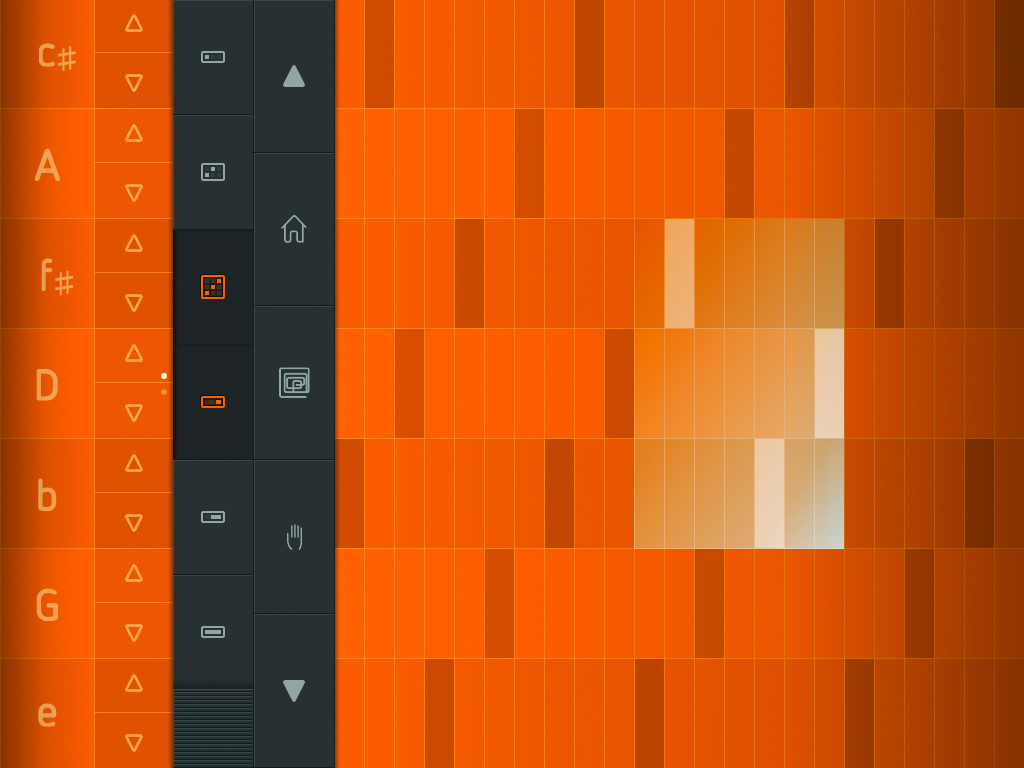 SoundPrism is an advanced MIDI controller for iOS that connects to your DAW or hardware synth via Wi-Fi or USB (from iPad only) and enables individual MIDI control of multiple instruments at the same time. It lets you easily create harmonies in any key, and build loops graphically.

There’s support for non-diatonic scales on iPad and you get to turn your iOS device into a wireless 3D MIDI controller. It takes a little getting used to but once you do you’re likely to find it both creative and enjoyable to use. New features include ringtone creation, recording and direct emailing of compositions. 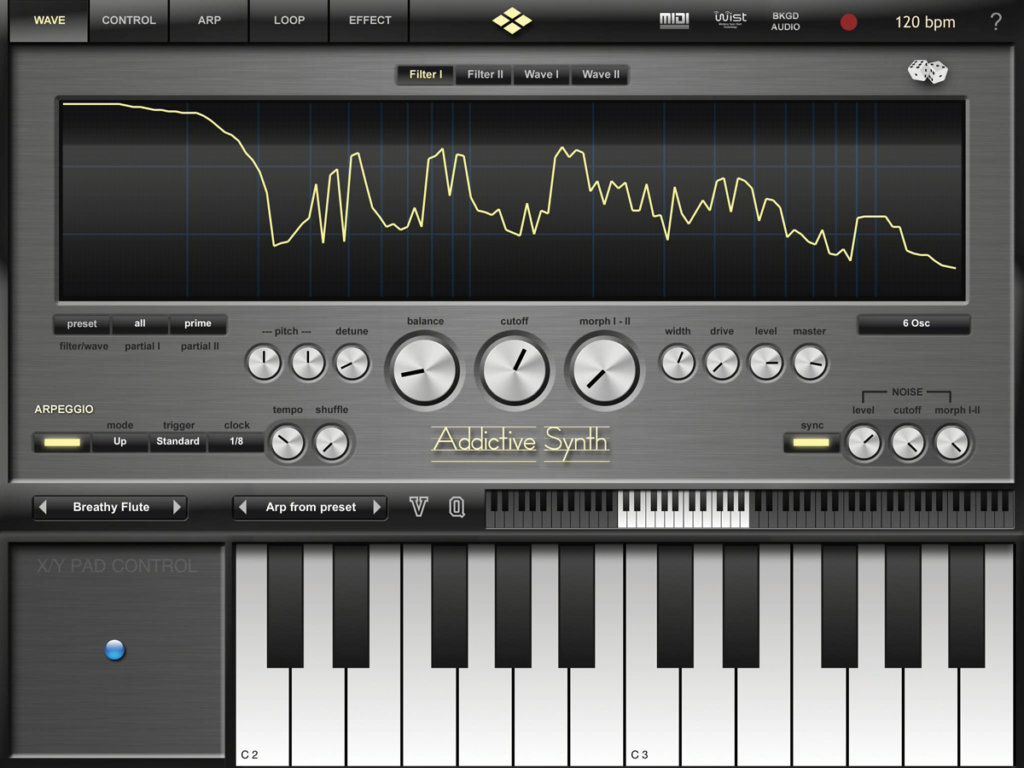 This dynamic wavetable synth enables you to explore a wide range of sonic territory from acid loops, crystal clear percussions and realistic human choirs to complex musical soundscapes. It has six dynamic wavetable oscillators per voice, continuous morphing between two oscillator sets and real-time editing of up to 128 partials.

Extensive modulation is possible with the four LFOs and envelopes, and a matrix enables real-time control of five parameters using the XY touch pad, mod wheel and the accelerometer in the iPad. It’s also Audiobus and inter-app audio compatible. 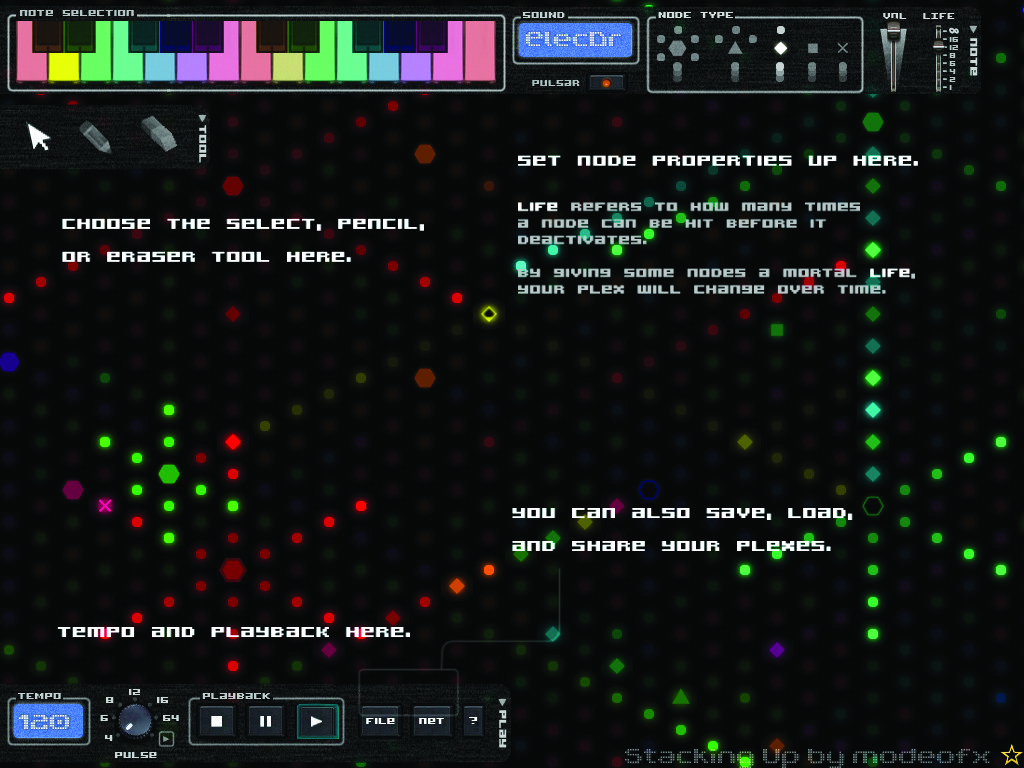 Create music visually with chain reactions in this unique app. A plex consists of a network of nodes, and each has a tone associated with it. When a pulse hits a node, nodes create pulses. The resulting chain reaction creates a noteplex song. You get multisampled instruments and synths: three complete drumkits, a Rhodes-like piano, multiple bass sounds, leads, strings and more.

Add your own samples to create an even more unique noteplex. There’s online sharing of plexes and the app enables zoom, drag, draw and edit modes. It takes a little learning but it can do cool things. 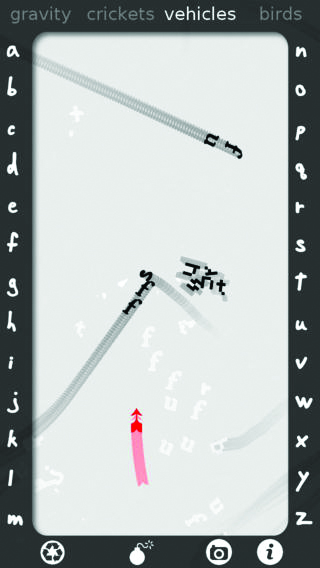 Incredibly, that’s not a misprint. This oddly named app lets you create and control tiny sound-creatures in the shape of letters that react to gravity or each other and generate rhythms and soundscapes.

It’s a sound toy, a performance tool and an art work where you can play with the letter-creatures and watch and listen to how they interact with each other. It blends art, biology, fun and physics to create a unique, dynamic and interactive sound ecology. While you might not be taking this on stage it’s a unique approach to music generation.