Best Controller/Performance Apps There are a large number of apps specifically designed to control music software and hardware. Here are the best… TKFX (iOS and Android) TKFX is a controller for Traktor Pro’s effects that runs on iPad and Android devices and gives you remote control of the effects in real time. Greatly expanding on […] 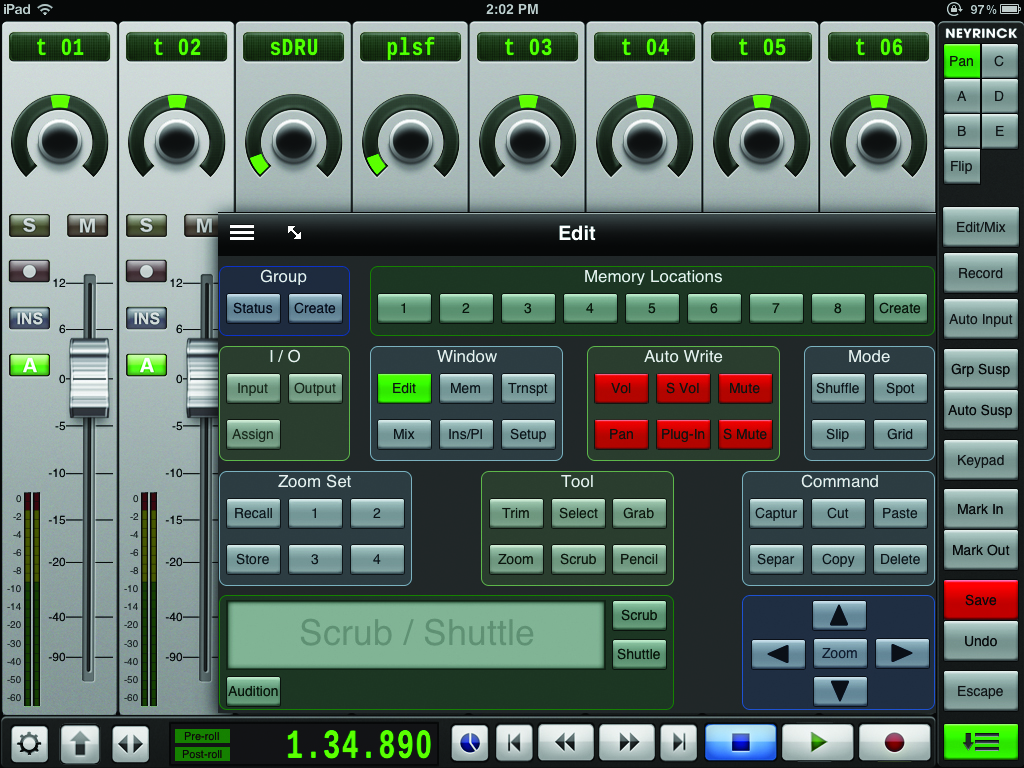 There are a large number of apps specifically designed to control music software and hardware. Here are the best…

TKFX (iOS and Android)
TKFX is a controller for Traktor Pro’s effects that runs on iPad and Android devices and gives you remote control of the effects in real time.

Greatly expanding on the control available to you using the mouse in Traktor itself, it uses MIDI mapping to enable an X/Y grid, and you can assign different parameters to both axes as well as holding the effect on, flipping between decks and slots and controlling overall dry / wet levels.

To enable this you have to install a small, free app on your Mac or PC that acts as a MIDI server between the two. It supports both wireless and wired network connections and you unlock access to more of Traktor’s effects via in-app purchases. 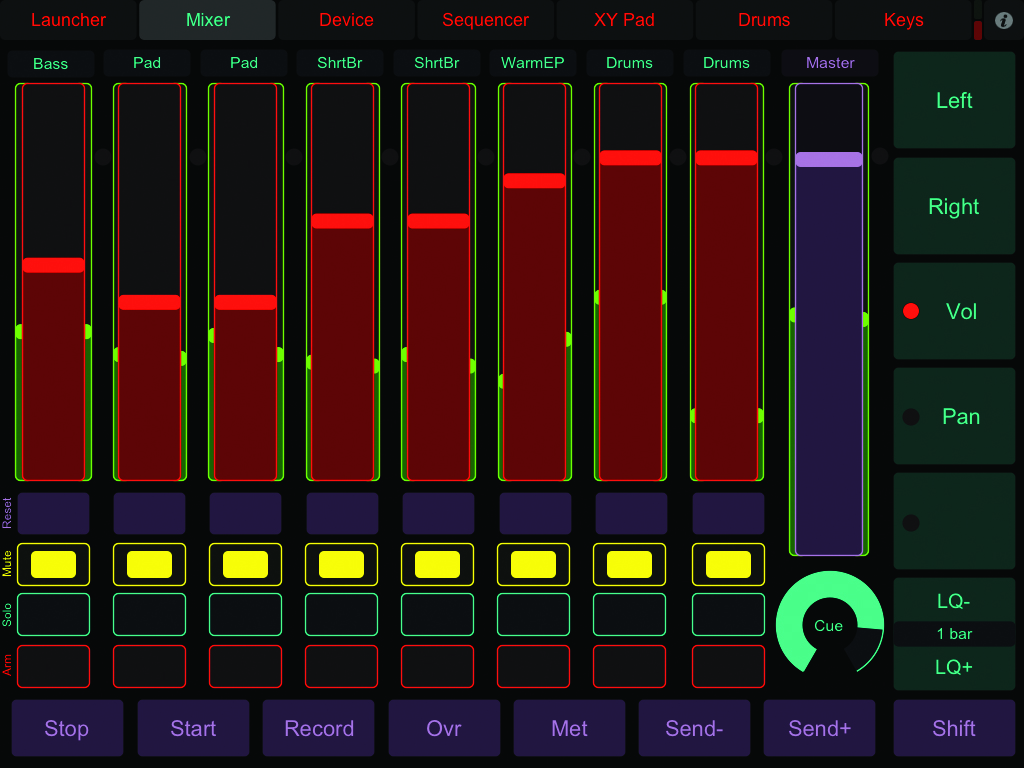 Hexler.Net TouchOSC (iOS and Android)
TouchOSC for iOS and Android is an open programming environment app that isn’t tied to any particular software but instead enables you to create setups to control anything that can accept the Osc or MIDI protocols, which covers a huge range of applications.

You can choose custom sets of controls and make assignments, building unique maps to do exactly what you want. It supports both wireless and wired MIDI and is officially supported by Logic Pro, as well as a range of other DAWs and more experimental music packages.

There’s a downloadable editor for OS X, Windows and Linux that enables you to create and customise layouts more easily from your desktop computer.

LivKontrol (iOS and Android)
Ableton Live is one of the DAWs that best suits remote control from a mobile device thanks to its clip-launch style of performance.

Install the support files on your Mac or PC and Livkontrol for iOS and Android will discover your copy of Live (8.26 or higher) and give you hands-on control over your sessions.

There’s the Launchpad interface for launching clips, a scrollable Track Detail, and a Clip Composer to work with MIDI clips remotely.

There’s also MIDI sliders for varying parameters, and MIDI pads for composition. Live responds especially well to remote input, and with this app you can control your sessions and actually play and edit MIDI live as well. 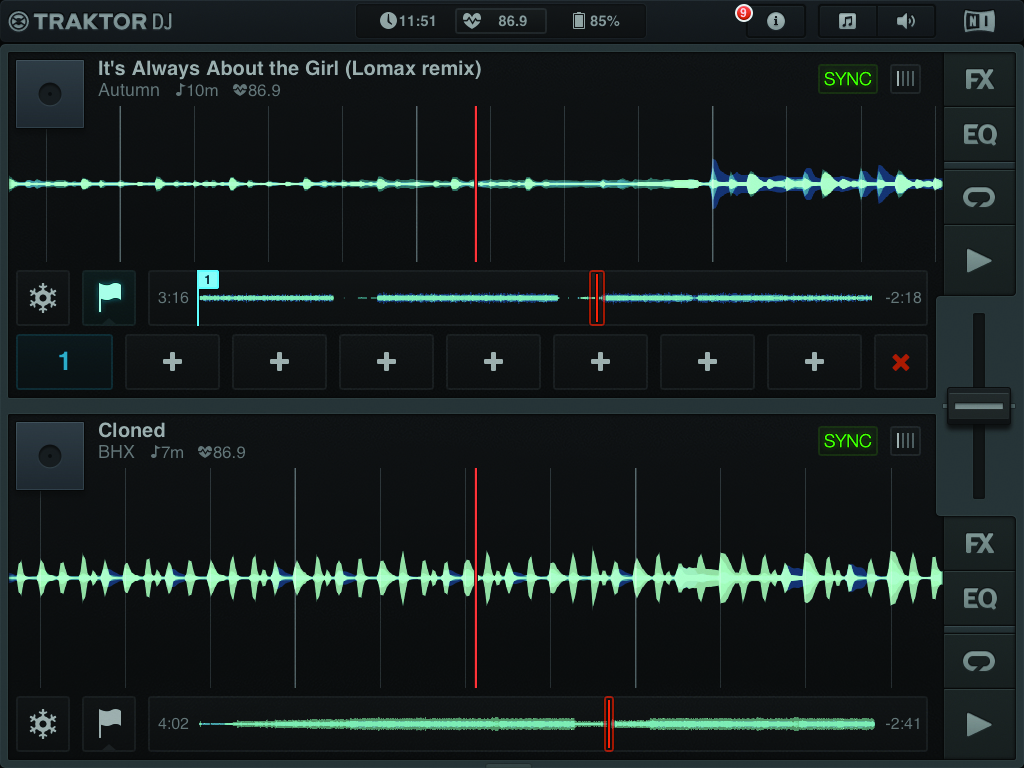 Native Instruments Traktor DJ (iOS)
When NI does mobile apps it tends to do them really well. Traktor DJ for iPad and iPhone takes the essence of the much bigger Traktor Pro software and places it into a touch environment.

The results are amazing: incredibly accurate beat detection and sync capabilities, slice freezing and easy library and playlist navigation. You get a bunch of effects that can be controlled via integrated X/Y pads and the whole thing feels really slick.

You don’t have to be an experienced DJ to give a great performance and you can even record the output of the app as a regular audio file. Features like the Superslicer mean it’s more of a performance tool – it’s not just for spinning tracks. 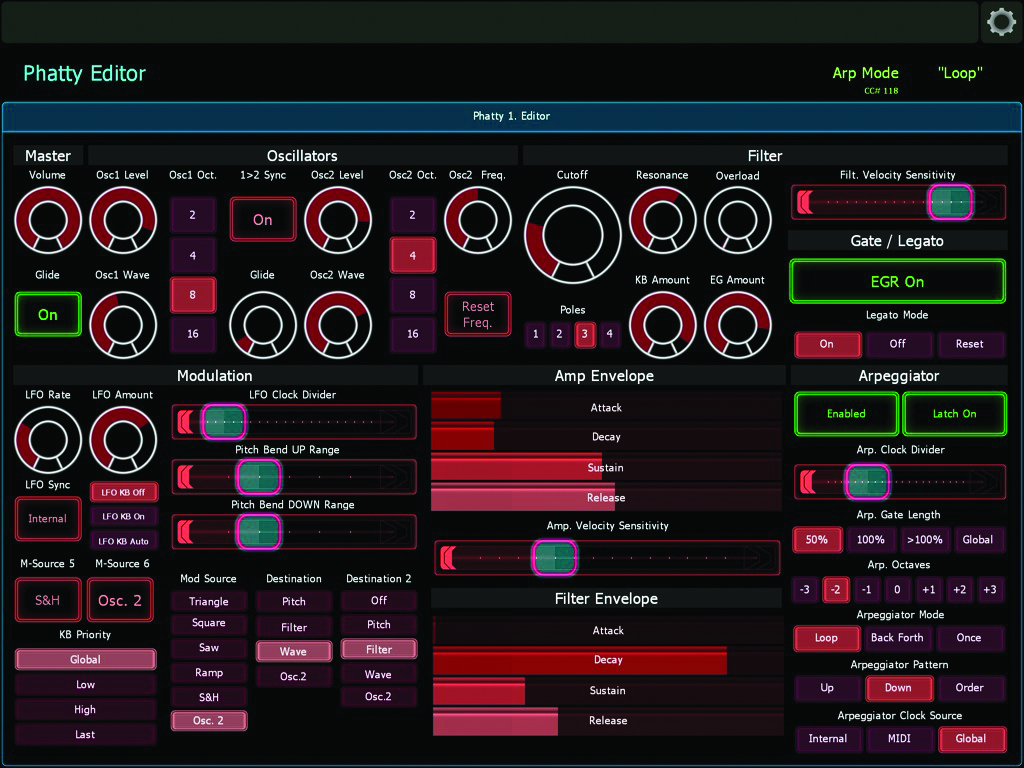 Liine Lemur (iOS)
The touch interface is perfect for certain kinds of control, and before iPads and iPhones came out it was restricted to very high-end hardware. Now for a tiny fraction of those kinds of costs you can get the same experience.

Lemur enables you to build any control interface you can think of for software that can receive MIDI or OSC input signal.

That includes DAWs, DJ software, VJ apps, stage lighting and loads more. A highly advanced system, it lets you script custom widgets with multitouch support and has complex sequencing objects and an in-app editor (iPad only) to design and edit templates on-the-fly. Fully skinnable, it’s found fans among some of the leading electronic artists. 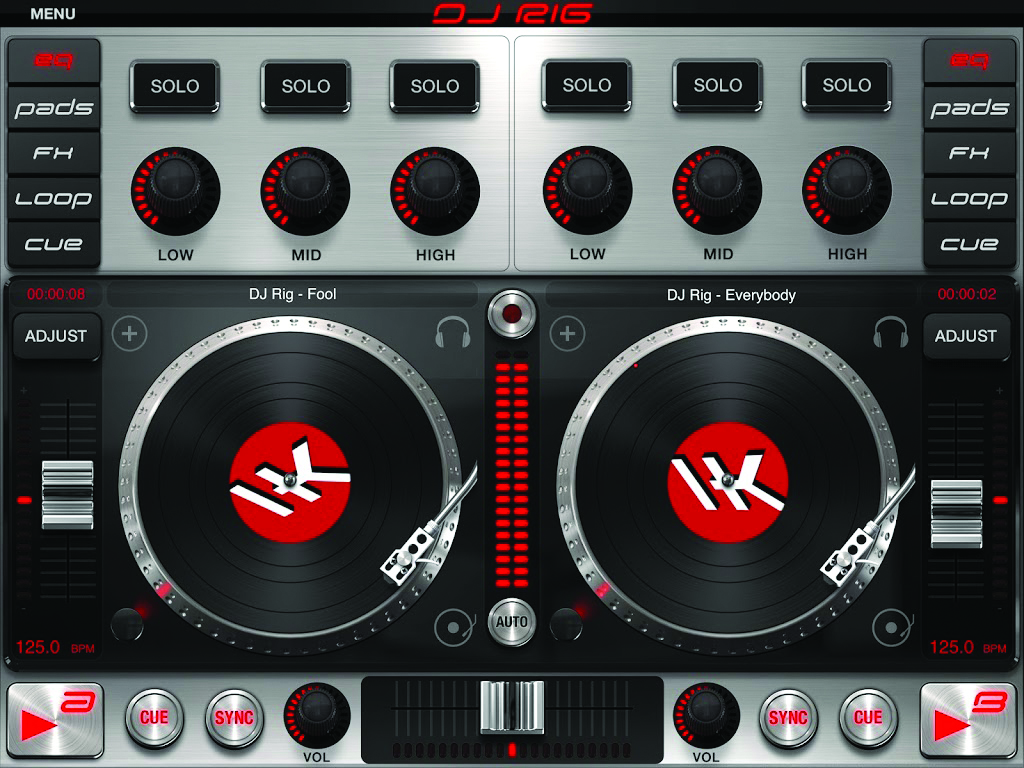 IK Multimedia DJ Rig (iOS)
Designed to work in conjunction with IK’s iRig Mix, DJ Rig is a familiar-looking DJ app with two virtual turntables and several modes of operation. Each of its decks can operate in waveform, turntable or CD Digital Jog modes to suit your performance style.

You get all the tempo and sync features you’d expect as well as a drift meter, direct cue with multiple cue points, three-band kill EQ and access to the iPad’s music library.

There’s also IK’s X-Sync feature that syncs the tempo of tracks from the iPad with songs from external sources when used with an iRig Mix.

There’s AutoMix for when you want to go to the bar and a loop surface as well as onboard effects.

Apple Logic Remote (iOS)
As is often the case, Apple is so big it can afford to give away some remarkably powerful apps in order to drive hardware sales. For musicians that’s a pretty good deal, and Logic Remote is a really excellent app for iPad that works with Logic Pro X, MainStage 3 and GarageBand.

You can play any Logic or GarageBand instrument remotely on a virtual keyboard or fretboard, play beats on virtual pads and even strum chords.

Navigate projects using transport controls and markers, punch recording in and out from anywhere on a network and remotely change patches and trigger key commands. It’s an amazing and free extension to your studio setup.

Steinberg Cubase iC Pro (iOS and Android)
Steinberg has been very active in developing a range of iOS applications that tie in with its flagship Cubase software. Cubase iC Pro (there’s also a free version available) runs on iPhone and iPad as well as Android and is beautifully designed, giving you a detailed overview of your project as well as hands-on navigation controls.

You can mix, and you also get to set up to four individual headphone feeds using Cubase’s control room features, and any performer with their own device can adjust their own mix independently.

There are customisable key commands and macros, and you can record- and monitor-enable tracks from anywhere on the Wi-Fi network.

Neyrinck V-Control Pro (iOS)
V-Control Pro is a multitouch control surface that supports a wide range of apps running on your Mac or PC.

It uses Wi-Fi to control transport, editing and mixing and also provides control of sends, automation, groups, plug-ins, transport, I/O assignment and more depending on the app you are controlling.

Remarkably, it can connect to almost any music app: Pro Tools, Logic, Live, Cubase, Sonar, Reason, Digital Performer and Reaper among them.

And it can also control Adobe Premiere and Final Cut Pro. It may be among the more expensive apps around but it gives you the kind of functionality from your iPad that just a decade ago would have cost thousands of pounds. 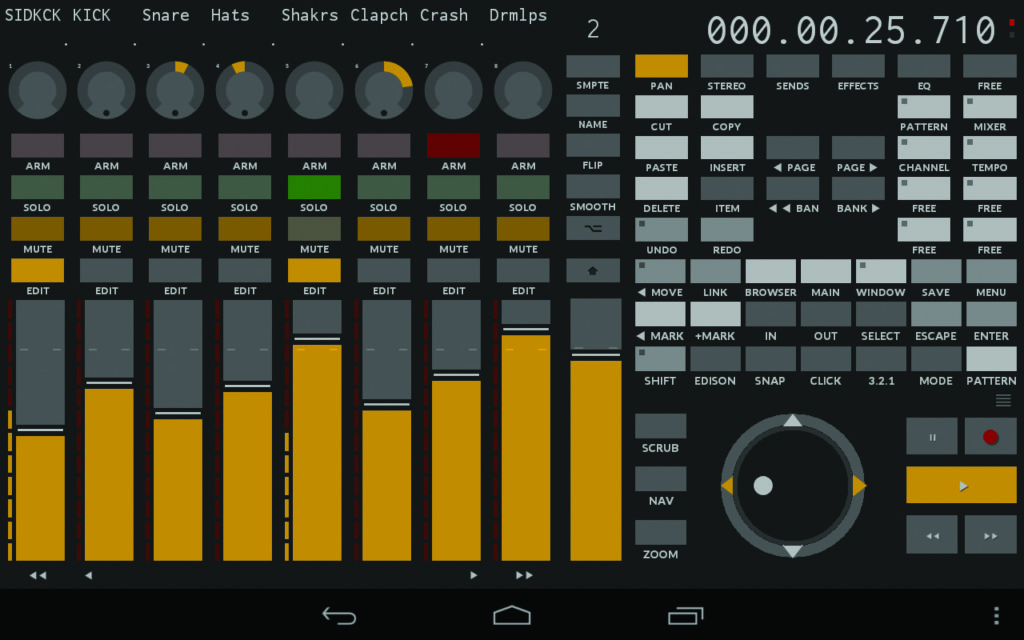 Humatic TouchDAW (Android)
This Android-only MIDI control app supports Cubase, Logic, Pro Tools, FL Studio, Reason and a range of other DAWs. You get mixer and transport functionality and the app can send MMC in parallel with, or instead of, DAW control.

There’s a multitouch MIDI keyboard and launchpads, a MIDI mixer, configurable X/Y pads and the app works both over wired and wireless connections and hooks into Apple’s Network MIDI implementation.

It’s an inexpensive way to open up your studio setup to wireless control from your Android device and can be configured to work as you wish. There’s a limited free version for testing and then you can opt to buy the unlimited version.