Getting a great iOS synth has never been easier, with hundreds to choose from. Here are six great and varied mobile synths – and some advice on getting the best from them… Korg iM1 The iM1 is an iOS emulation of its 1988 digital workstation, the all-conquering M1 and is one of our fave mobile […] 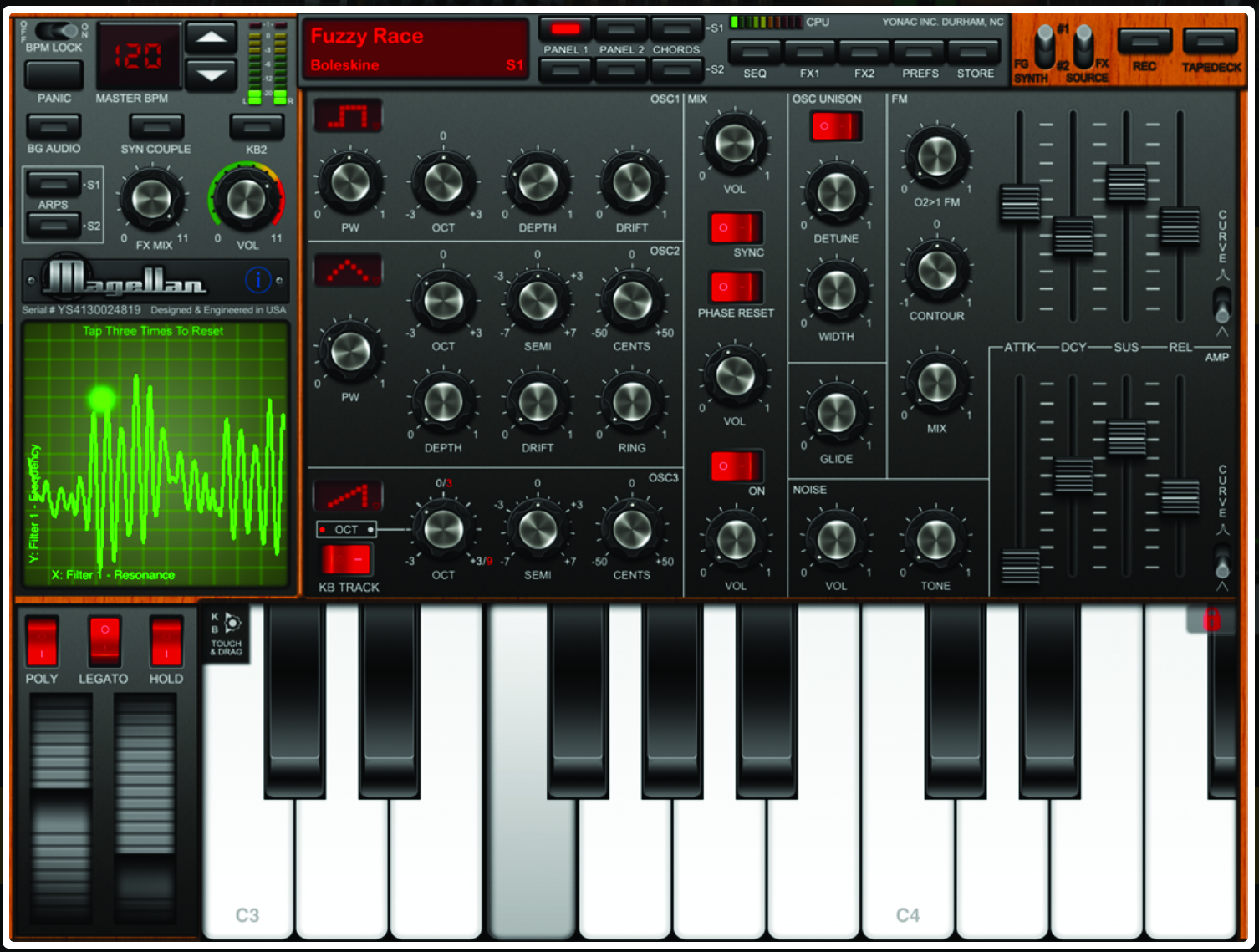 Getting a great iOS synth has never been easier, with hundreds to choose from. Here are six great and varied mobile synths – and some advice on getting the best from them… 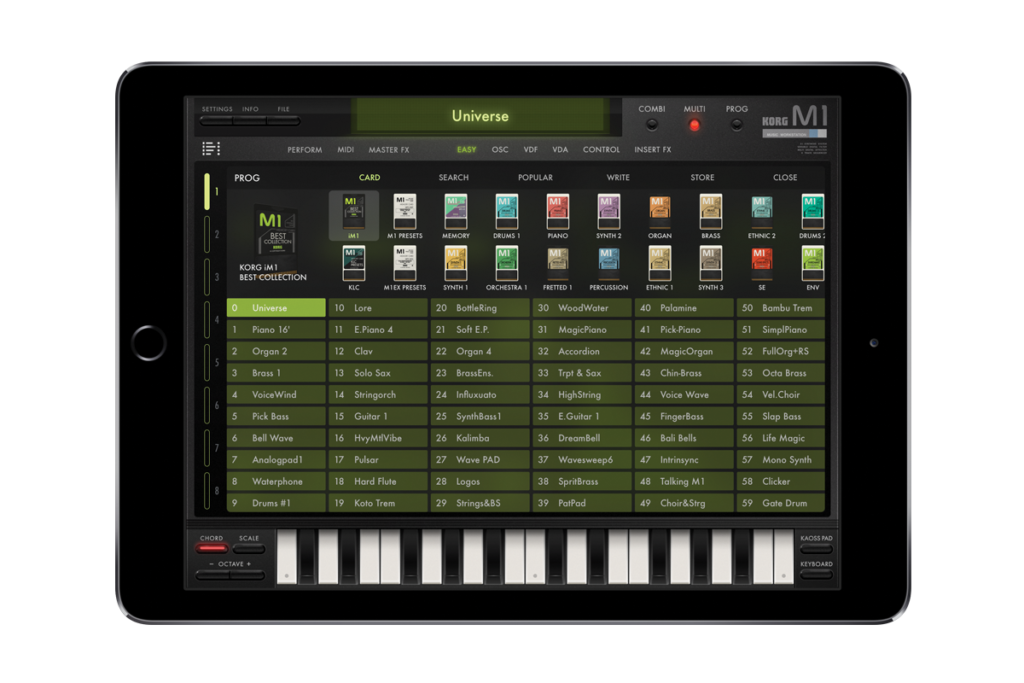 The iM1 is an iOS emulation of its 1988 digital workstation, the all-conquering M1 and is one of our fave mobile synths

Where most mobile synths emulate classic analogue synths – and why not, with a touch interface that lends itself to twiddling virtual knobs? – or create something completely new, there are few that plunder the history of digital synths.

Korg’s iM1 does just that by recreating possibly the greatest digital synth ever made – or at least the one that made the most impact on its release in the late-80s. The M1 scored that period of music, and it is recreated in the iM1 – which, we’d argue, is even better than the the real thing.

It’s easy to program, you can buy all the extra sound packs (which won’t cost you ‘loadsamoney’ [like the 80s reference there – Ed]) and nothing else will give you the brash, go-faster stripes that were digitised synths from this decade. Expensive, but iM1 does a lot for your buck. 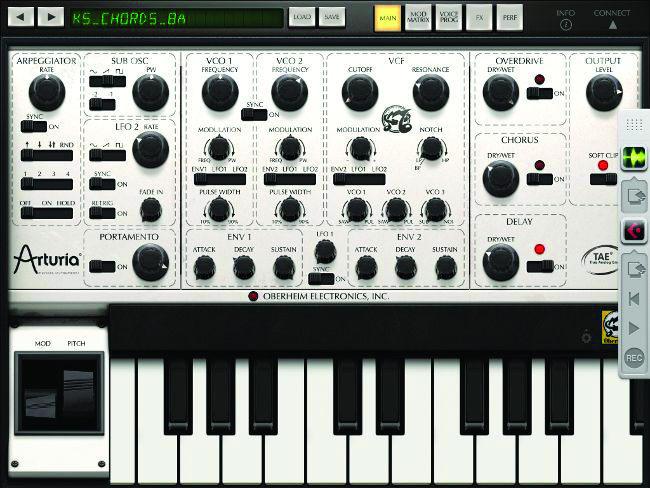 Arturia is the king of recreating classic synths in software, so it’s no surprise that the company has now become the iKing of creating synth classics on the iOS platform. iSEM is a synth based on the 1974 Oberheim Synthesizer Expander Module, one of the first all-in-one synthesisers but, as usual with Arturia, there are one or two modern additions. You get the ability to edit up to eight voices simultaneously, a bunch of effects, and an arpeggiator.

The 500+ presets utilise a similar technology that the company uses in its desktop synths – a modelling rather than sample-based engine – so the results are slick, ‘analogue’ and as real as you like. They’re perhaps more sheeny than gritty, but evoke the original like no other [apart from maybe Tom’s new hardware synths! – Ed]. 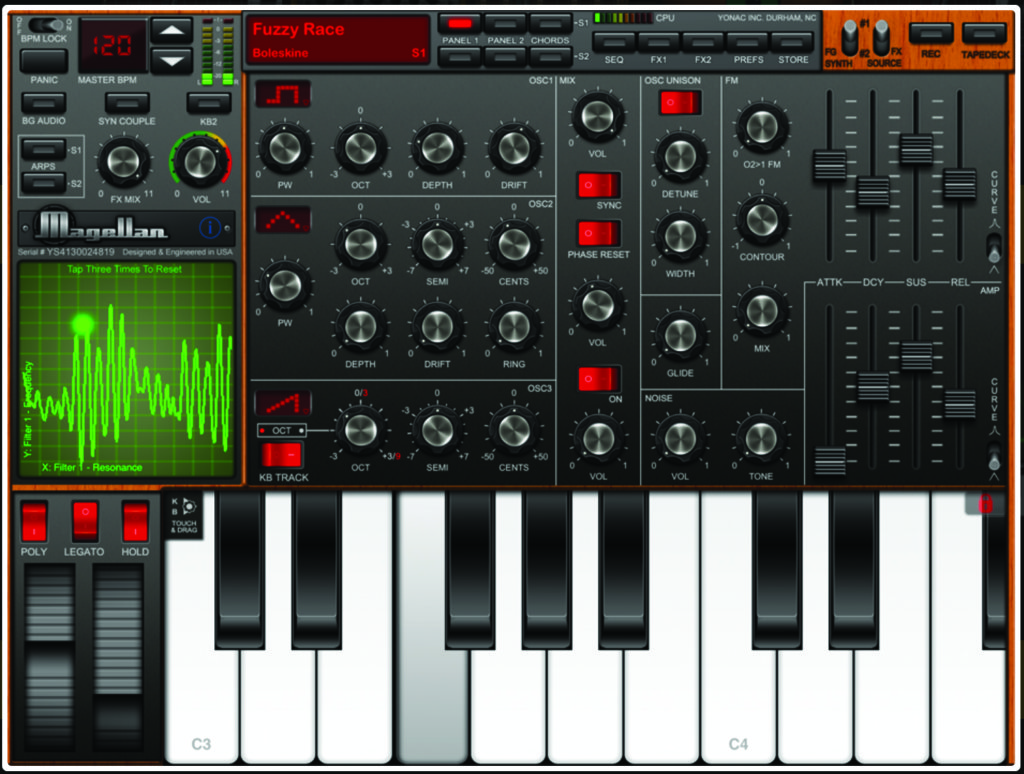 Two mobile synths in one, anyone? Magellan has a pretty mighty sound, thanks to two independent synth engines and a rack full of colourful effects. Each engine has three oscillators, two filters (with 11 types each), two LFOs and an ADSR envelope.

In addition, you get a sequencer, chord maker, arpeggiator, comprehensive modulation section and over 300 presets, which vary from some inspiring pads to big basses, plus another 10 categories.

To be honest, there’s not a lot you don’t get – which makes some of the controls a little small and fiddly. But it does result in one of the most fully-featured and biggest-sounding synths out there. Quite superb. 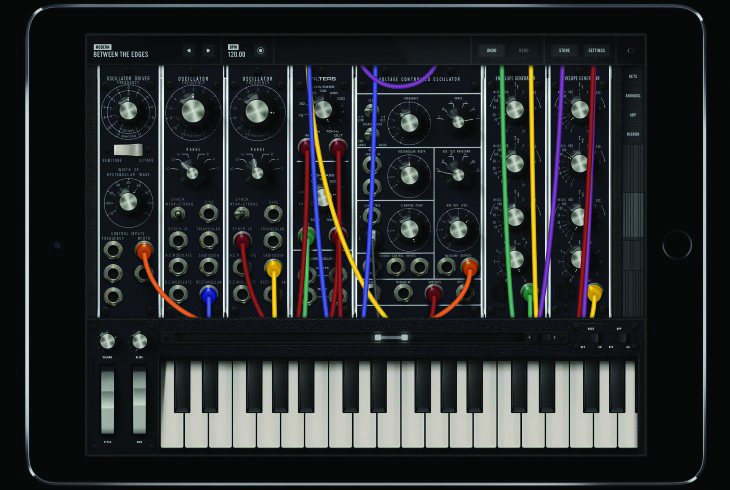 At Superbooth16, we saw a number of companies attempting variants of modular synthesis on iPads, but Moog’s is an out-and-out app version of a full modular system, comprising the usual (albeit classic Moog-type) oscillator, filter and other modules. You get virtual wires and a very usable pinch-and-swipe system to navigate around.

You’ll soon be enjoying those deep Moog sounds, although, with a whole stack of presets, you don’t really have to know too much about modular to get them. If nothing else, this is one of the cheapest ways to get that full-on modular synthesis experience – yes, it’s quite a lot for an app, but cheap for the equivalent hardware, believe us.

Model 15 is possibly the most involving synth app in our round-up – you’ll need later iMachines to run it – but it’s also the most true and, well, real…! 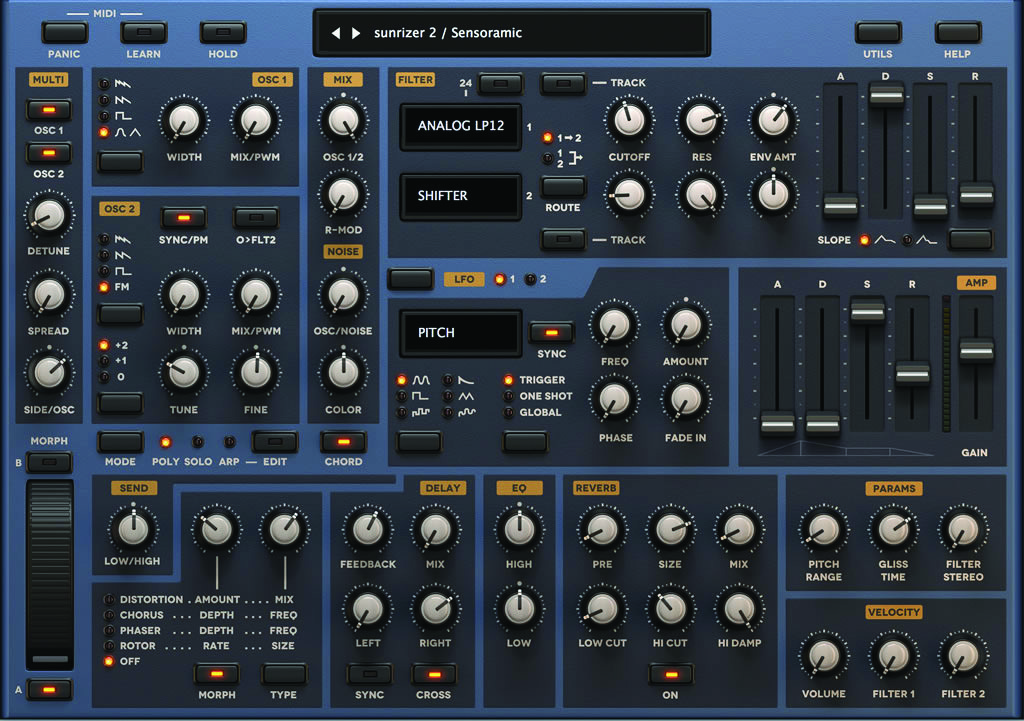 Sunrizer is a modern classic in the virtual analogue synth realm

It’s another virtual analogue synth, but it’s so well adapted to the iOS environment, you’ll quickly be creating more different sounds with this than most others. It’s based partly around the Roland JP-8000 Supersaw, although the two oscillators feature multiple waveforms, plus noise and ring modulator and there’s up to 20 notes of polyphony.

There are also two filter units and onboard arpeggiator, plus two LFOs and ADSR envelopes.

We were more than impressed with the onboard effects, especially the distortions and reverbs, which take the many sounds you get (over 200 from four banks, plus favourites) in completely new directions. Easy preset categories and a fine overall sound make this a modern classic among mobile synths. 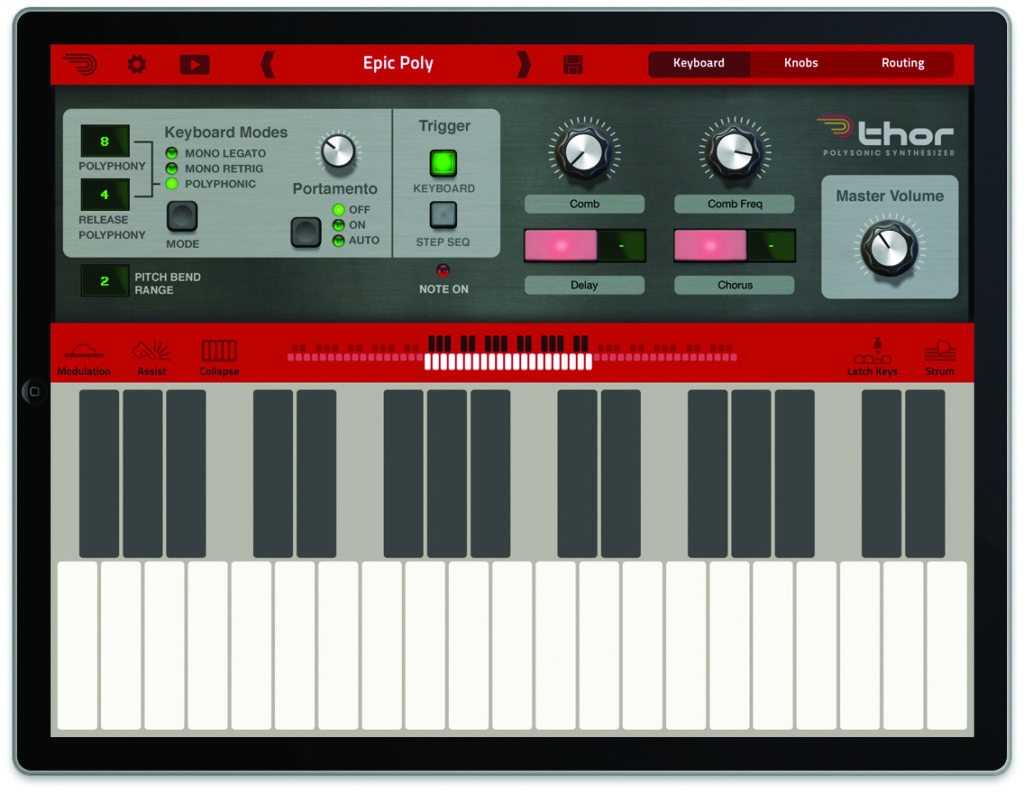 With a name like Thor and the developers behind Reason, you’d expect this mobile synth to sound amazing and be easy to use. Yet it also has a real level of complexity in terms of the possibilities, with six oscillator types, four filters, envelopes, and LFOs. We particularly like the semi-modular approach to routing from left to right – fairly standard, but very well implemented.

The six types of oscillators will give you everything from analogue to FM to wavetable, resulting in versatile soounds ranging from classic to in-your-face EDM sounds. Thor might have been released over three years ago now, but it still has a great sound and enough flexibility for most tasks.

You might be a little overawed by the flexibility and interface at first, but Thor will reward some tinkering beneath its fine-looking and sounding surface.

Getting an iOS synth to run with your favourite desktop DAW is not really the point of this article, although it is a relatively easy process just to use something like the Audio Unit Extension app that lets you run iOS apps as plug-ins. On a simpler level, you could connect an iOS MIDI interface and treat your iPad like an external instrument, recording audio in.

Better still, you could and should use an app like Secret Base Design’s Music IO to bring everything together. Essentially, this lets you run your iOS synths like AU or VST instruments by connecting their audio and MIDI streams with your desktop machine. We had Magellan and Sunrizer running perfectly within our Ableton Live tunes, for example.

However, as this is a mobile synths feature, if you want the perfect mobile synth setup, there’s little better, simpler and more stunning than Korg’s Gadget (see p20) – a kind of synth studio on acid. All the synths you will ever need, and more, ready to record in one app…