Show Off Your Studio: Principleasure on his palace of vintage gear: “It’s the only place in the world I feel truly at home”

Sharooz Raoofi explains why two Eventide outboard effects were integral to his new album, II, and walks us through the enviable synth collection at Principle Pleasure Studios. 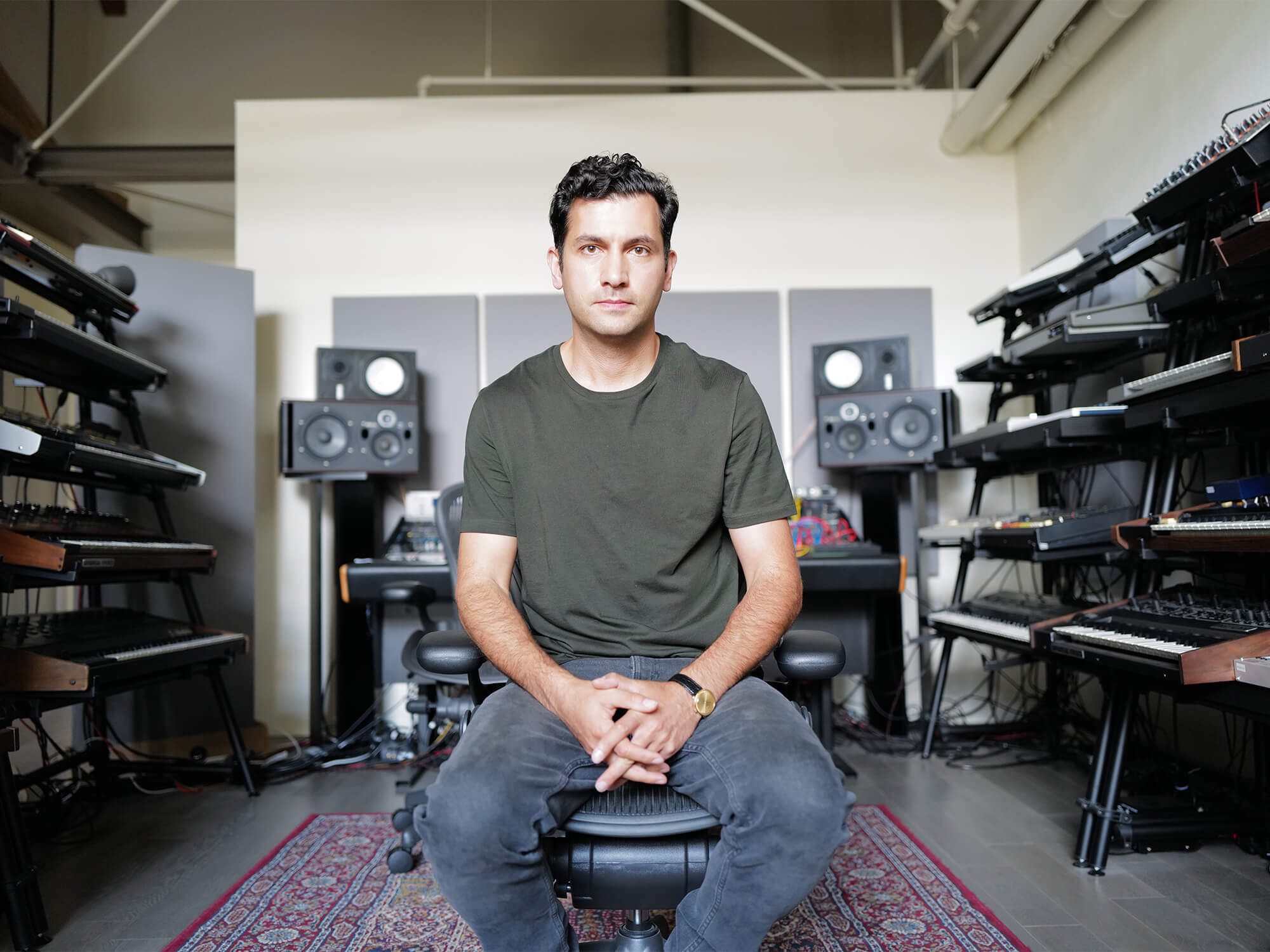 Sharooz Raoofi is the ultimate gear wizard. Also known as Principleasure, his entire career revolves around an unrelenting appetite for music technology. He’s a founder of Sample Magic, Sounds to Sample, Attack Magazine, and Audiaire, and is currently working alongside music tech megaplatform Splice.

Among all this, he still finds time to write songs for motion pictures, remix music for the likes of Moby, Robyn, and Craig David, and work on his own material. On October 18, he will be releasing II, the genre-bending follow-up to 2019 album I, which brims with rich synth work, melancholy tones and cosmic-sounding timbres. He invites us into his LA-based Principle Pleasure Studios to walk us through his enviable collection of synthesizers, drum machines and effects, talk about his fascination with the E-Mu SP-1200, and tell us why a pair of Eventide effects outshine today’s cutting-edge plug-ins.

Hey Principleasure! Congrats on II. As with your first album, you dip into various genres and styles. Is this intentional, or are you just allowing yourself to flow with different ideas?

It’s a bit of both, to be honest. Partly intentional because I find albums in one genre to be inherently boring, especially if every track is dancefloor orientated – there needs to be some dynamic flow, in my opinion. I just allowed ideas to flow as they came out. Placing a restriction on your output in terms of style, genre or tempo is one sure-fire way to never finish anything. 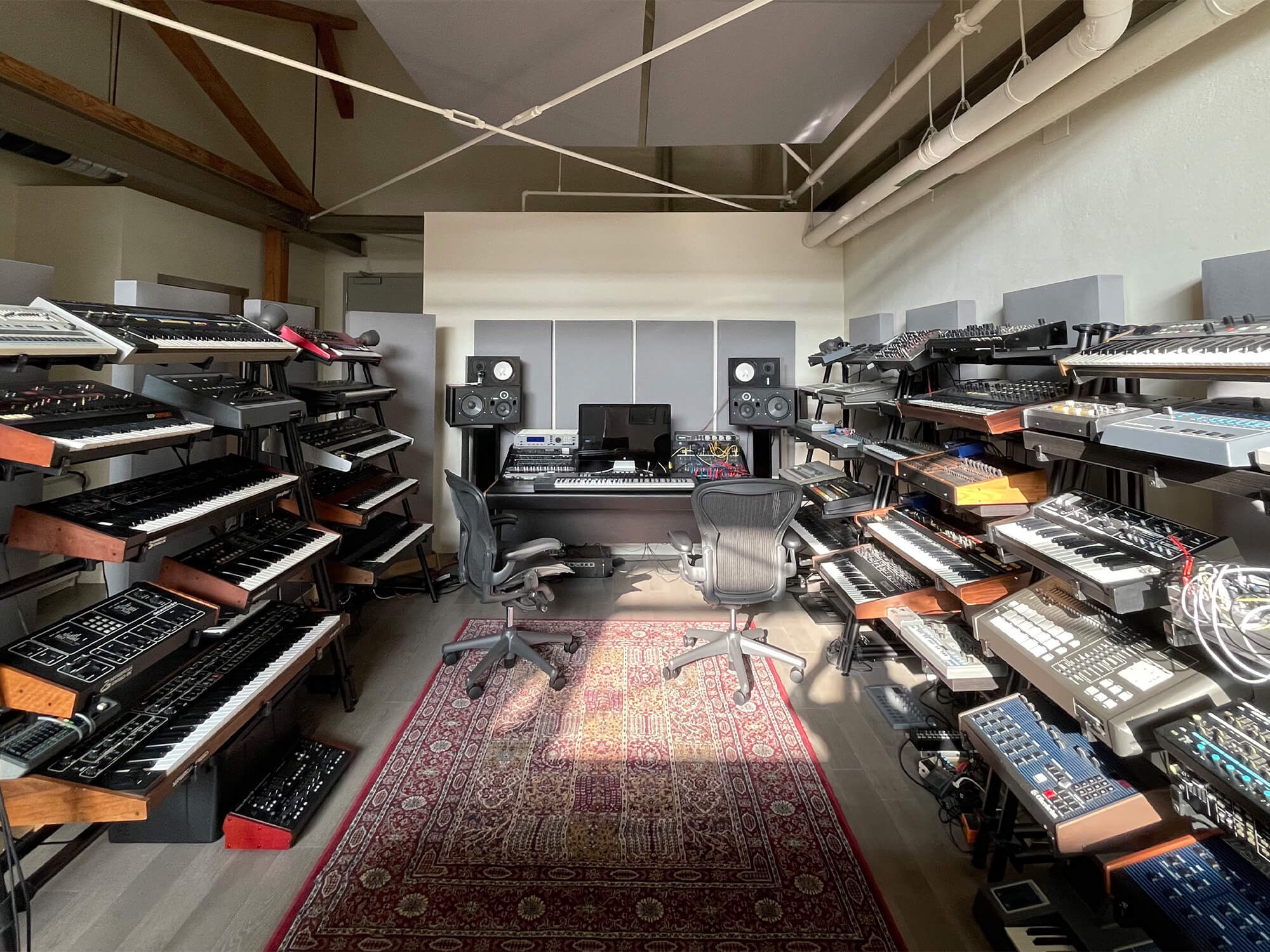 One constant in both I and II is the heavy use of synths. What draws you to synthesis over acoustic and ‘traditional’ instruments?

My obsession with synths goes beyond their usefulness in music production [laughs]. While I prefer making music using hardware, particularly vintage synths, for the average listener there’s not much nowadays that sets apart plug-ins and their analogue equivalent in terms of sound quality.

For me, I love the finite nature of working with older technology. It’s a way of just committing to printing something without going back and endlessly tweaking a sound or preset. Plug-ins can give too much choice. I know with old sequencers and drum machines there’s only so much that can be done – especially if there’s no MIDI. It commits me to sticking with an idea and seeing it through. 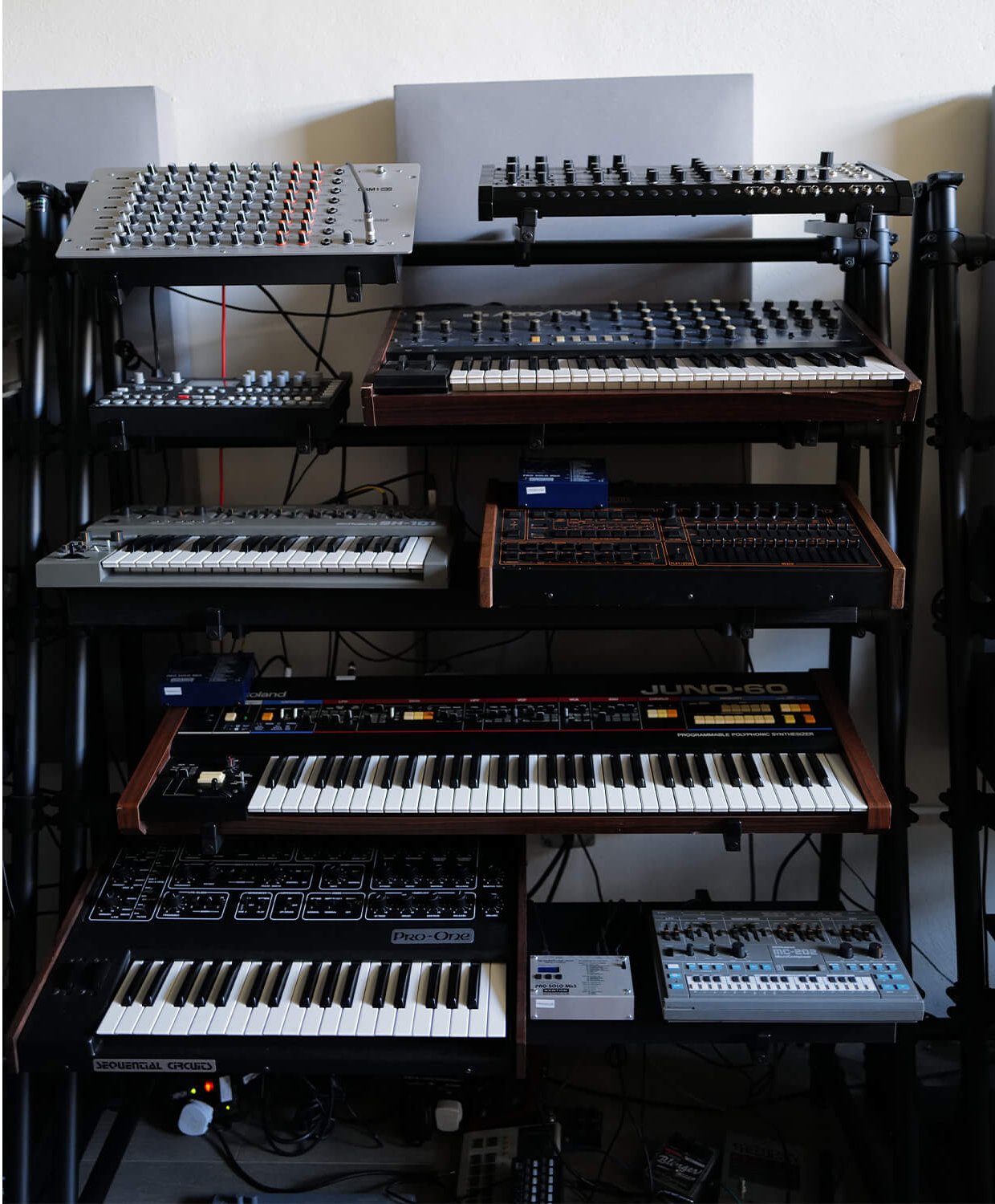 We hear you worked at Miloco Studios Red Room for the mixing of the record. What was it about that studio that allowed you to complete the album?

The history, the staff, and the gear, of course – particularly the monitors. Miloco Studios has these huge Augspurger speakers that are truly in a league of their own. During the pandemic, I was fortunate enough to dedicate a bunch of time and really get to know the room and the processors, including the Eventides and Lexicons, of which I became a late adopter but a lifelong fan. They have some of the best outboard gear I’ve ever seen and getting to use that really made a difference to the overall mix quality.

We take it that you recorded a lot of your ideas in your Principleasure studio? Can you tell us a little bit about the place?

Principle Pleasure Studios is a room I’ve had in Los Angeles for a few years. I’ve collected synths and drum machines since I was a boy – for over 20 years – and have everything hooked up with a MIDI clock so I just hit play and the entire room rolls along nicely in sync with my DAW. It’s the only place in the world I feel truly at home. I even set up a bed in there at one point, because it was a large enough space to comfortably live and work [laughs]. With current global events, it was very hard to get to the US from the UK, so I did more than half of the new material entirely in the box – which was a very interesting departure from the first album. 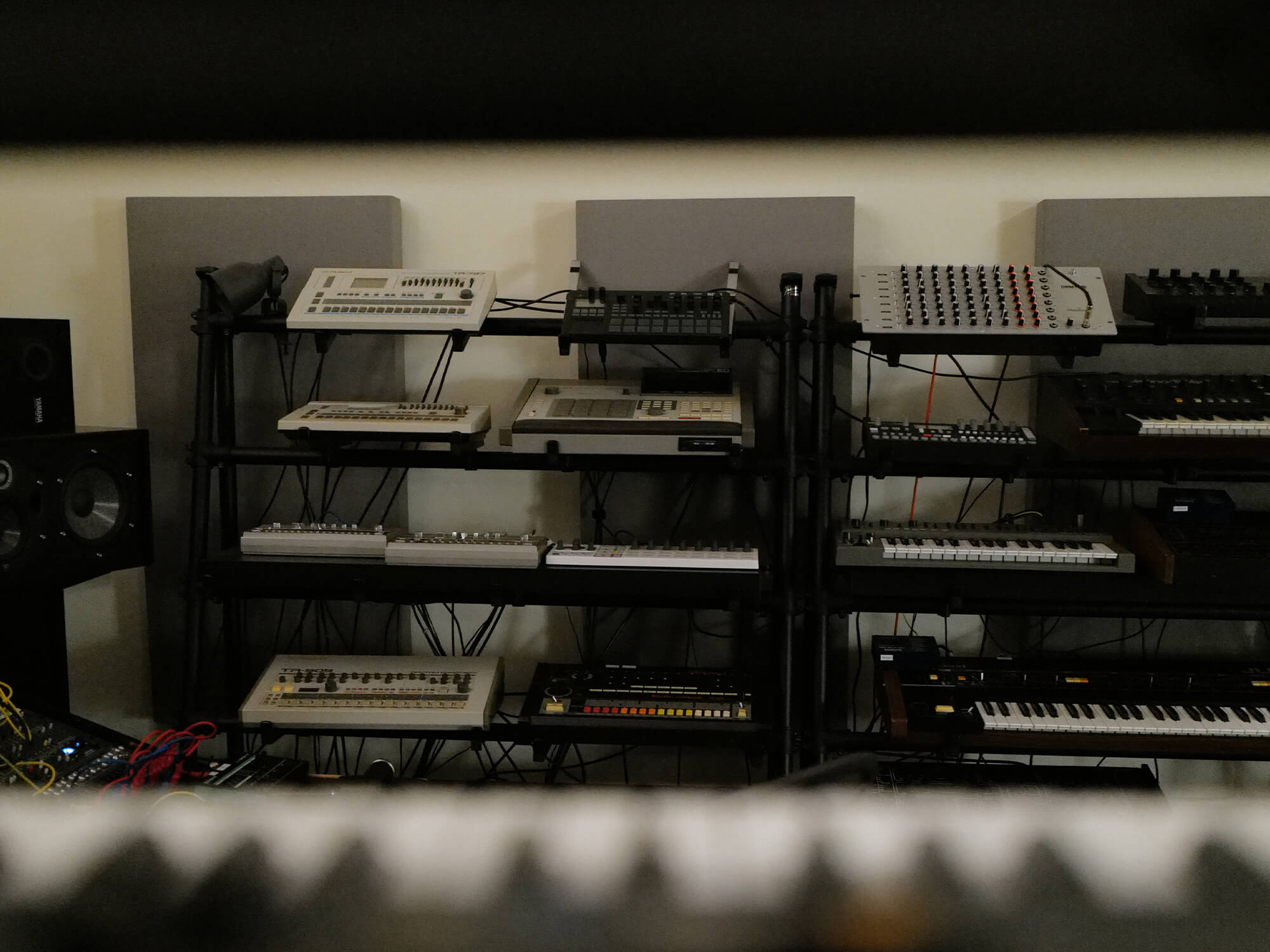 Nostalgic, dark, electric, club-like, and shut off from the outside world. It’s also important to have everything laid out in a way that’s easy to know how something is routed or where the connections are. When one has the sheer amount of gear as Principle Pleasure Studios has, it’s essential to know where everything sits in a chain or how it’s synced. Of course, it all goes to shit when I acquire a new piece of gear and have to unplug about 10 old devices to accommodate it. 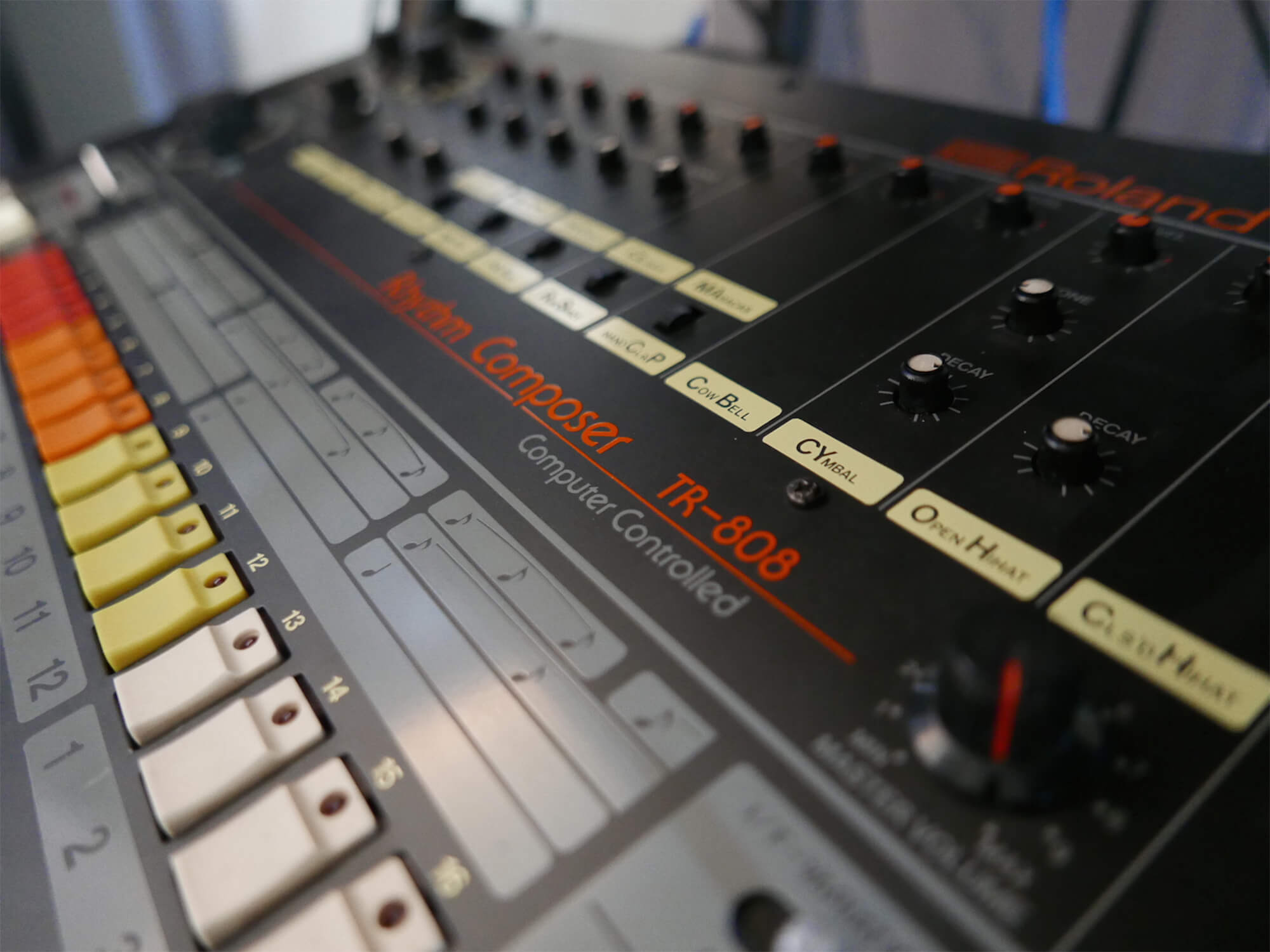 Cubase, primarily. It’s so reliable for audio processing and the bundled Steinberg plug-in suite is one of the best there is. I still use the same filters and reverbs they’ve had since 2010 or so. I’ve beta tested for them for years so if there’s a feature request or anything I’m unsure of, they’re just an email away. It also has very extensive clocking and routing options, which in an environment like mine are heaven-sent.

This could be a tough one: what is your favourite piece of gear?

Right now probably the E-Mu SP-1200. It’s impossible to resist the crunchiness and crispiness of those drums. Everything you put through it just turns into a nasty, plump, almost unrecognisable version of itself. Nobody has ever bettered it in software or hardware. And the sequencer has such a human feel and groove. The lack of memory means you have a laughably small palette to work with, and forces you to pick just a handful of sounds that work well together. 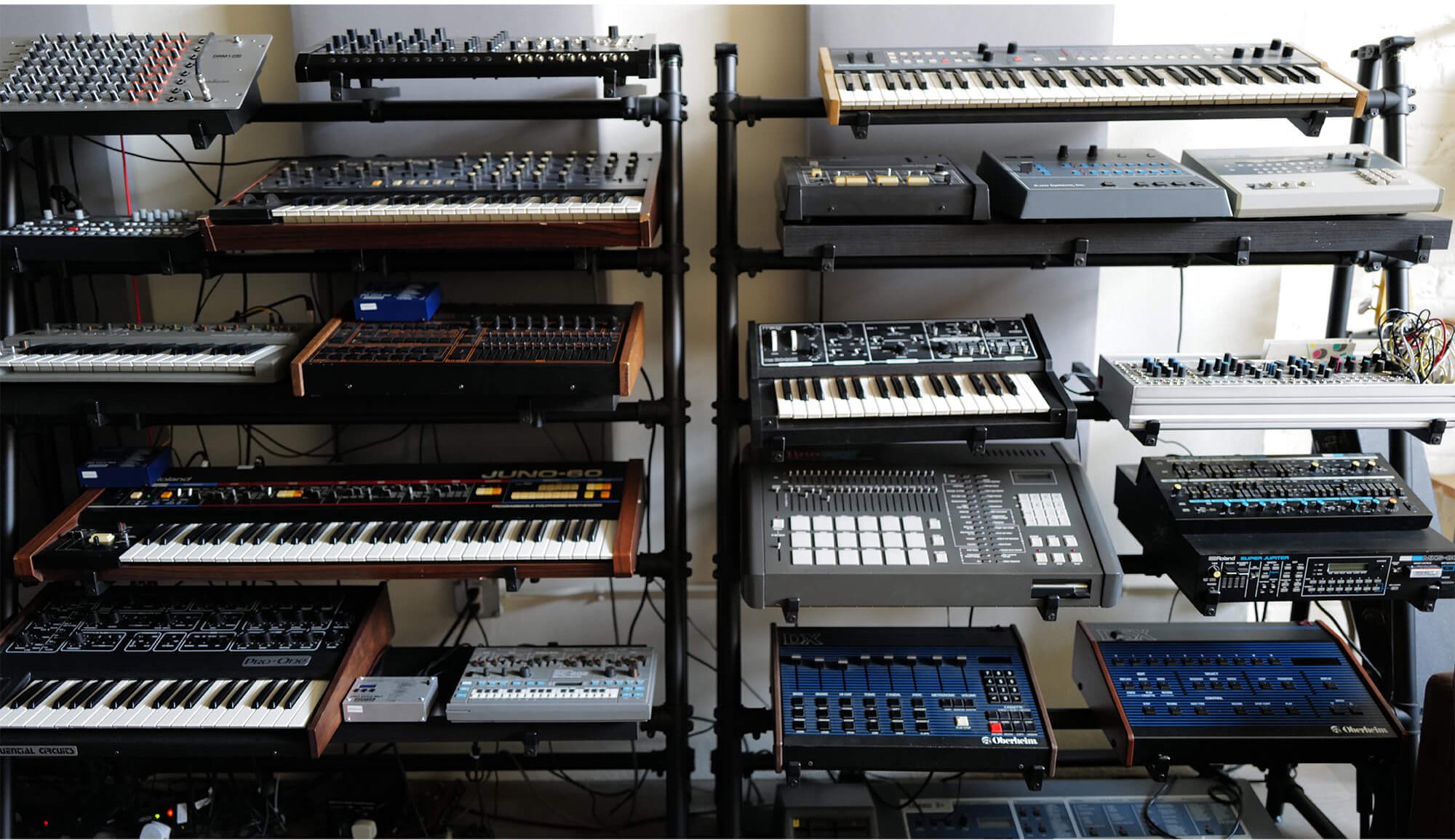 Is there a particular synth or effect that can be heard the most on II?

Probably the Eventide H3000 or DSP4000. I got into these effects super late and initially found it hard to believe an ageing hardware processor could sound richer and lusher than convolution reverbs. These things have their own magical fairy dust that they throw into the mix. The presets are so well programmed and fit every sound so well – I can literally print one on every channel and still not clutter things. I don’t even bother syncing the delays on the presets. I fully understand why every big studio has one. 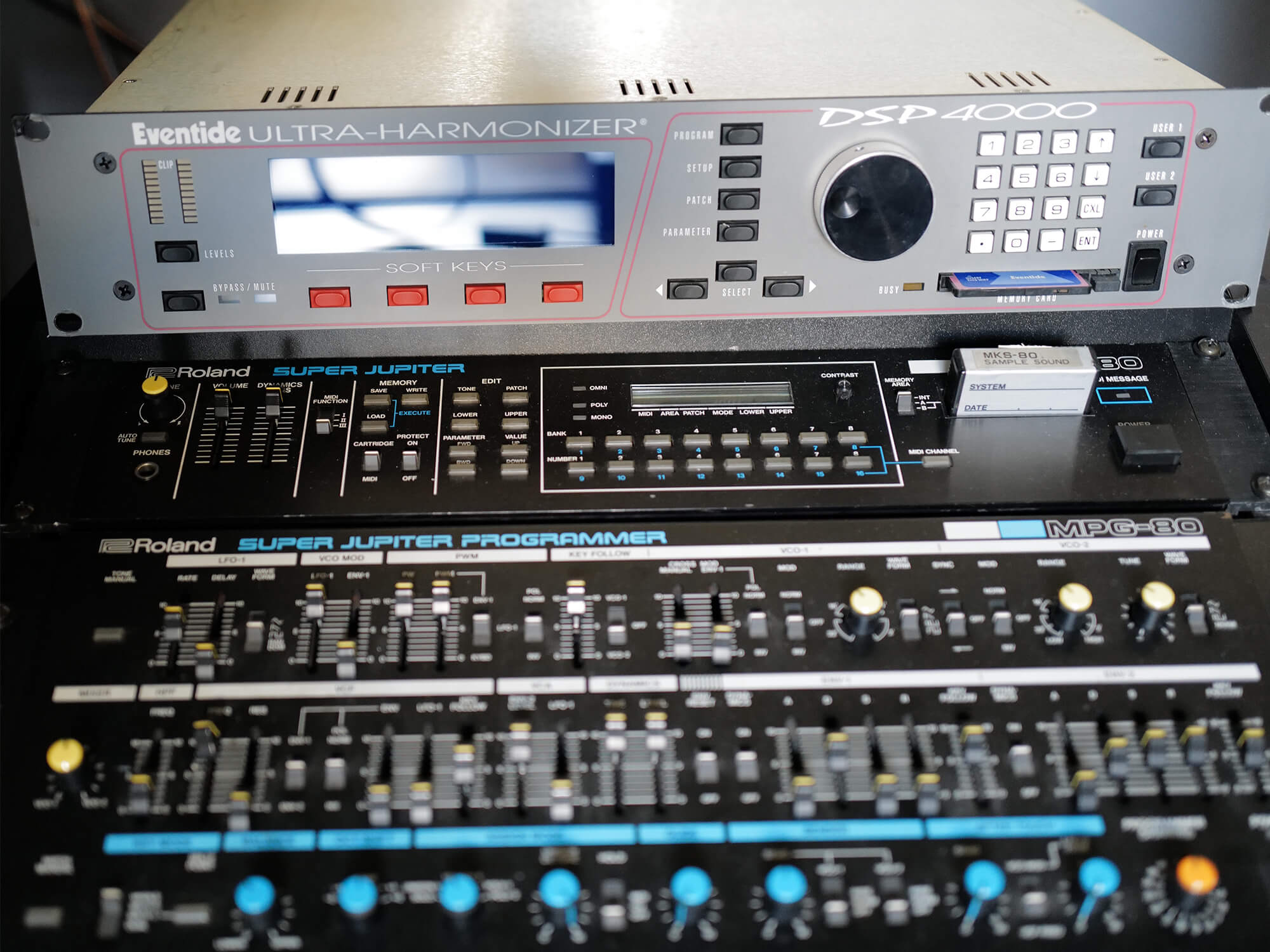 Of all the sound design on the LP, do you have a favourite moment or a sound you are most proud of creating?

Probably some of the sounds I specifically created in the Astra plug-in, which comes with a Splice membership. I actually developed it, so it’s tailor-made to fit my own wants as a sound designer. I used it extensively on the track Lexicon for both the leads and sub-bass. It has a parameter sequencer and a huge range of oscillator options so fits most genres and styles flexibly.

Recently, monitors. And yes, 100 per cent worth it. I use the Focal Trio and these little wooden BBC Stirling Audio speakers. Everything starts and finishes with the accuracy of the monitoring environment, so it always dismays me when I step into a huge songwriter’s room and they’re using these $200 KRKs. Fair play if you can accurately mix on those but I can’t see how it’s possible. 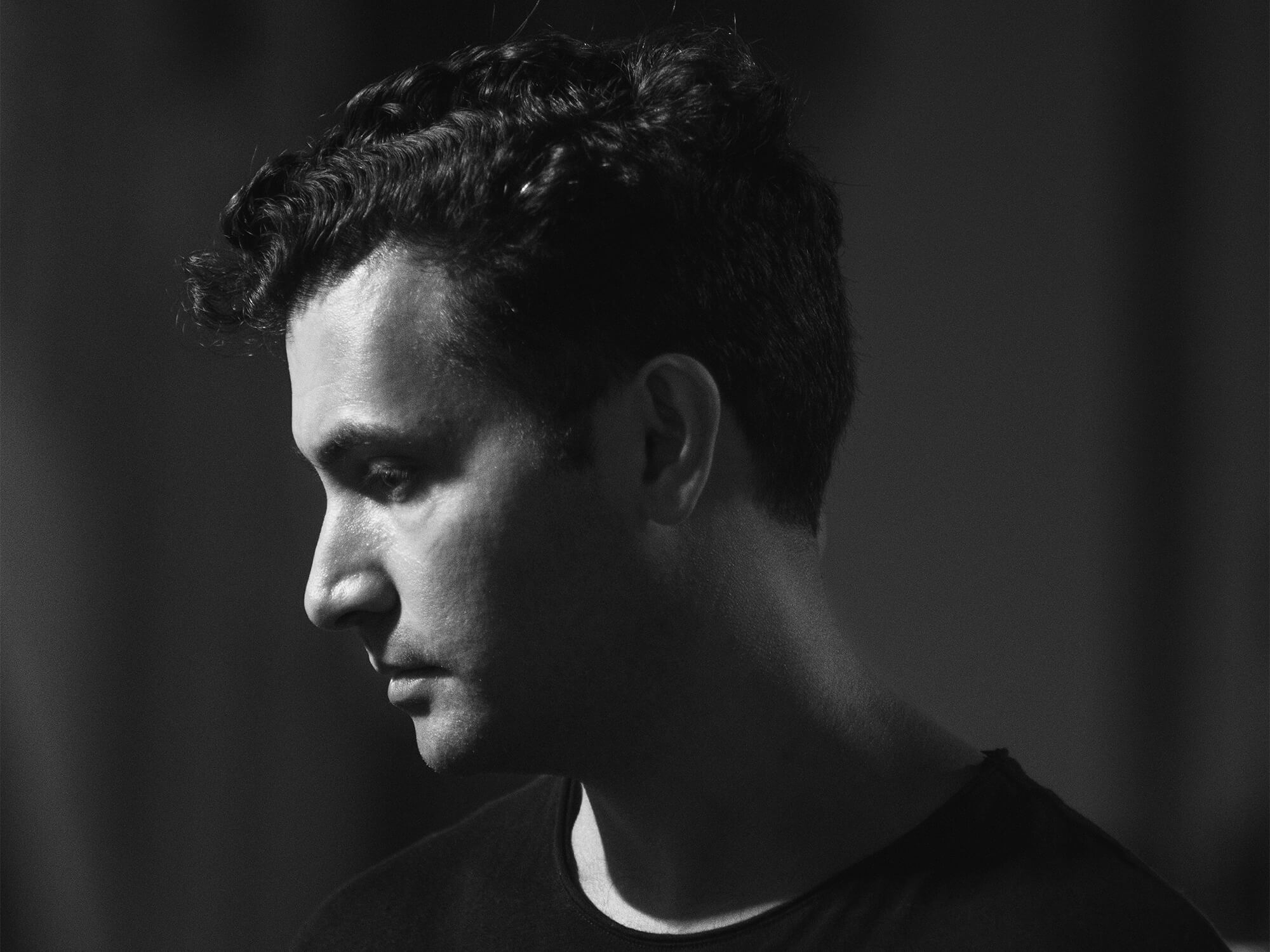 A Yamaha CS-80, of course. It’s a dream machine and nothing will ever come close. It’s the most expressive electronic instrument I’ve ever played and creates a sound unlike anything else. It’s beautiful, frightening, intense, smooth and aggressive all at once. It’s absolutely breathtaking. With just a little reverb it could sit on just about any track or style imaginable.

A spoon – to eat coconuts, gut fish and bang on my knees and temples to create tuned percussion.

Work with your ears, not your eyes. There are too many distractions – curves, automated processes, knobs, wires, patch cables and modular dickery around these days. Of course, it’s ironic for me to say this, as there is so much gear in my room. However, some days an idea just flows on my 10-year-old 13-inch laptop in Cubase using a bunch of Kontakt instruments. On those days, when my ears are exclusively leading the process, I work ten times faster and more productively. 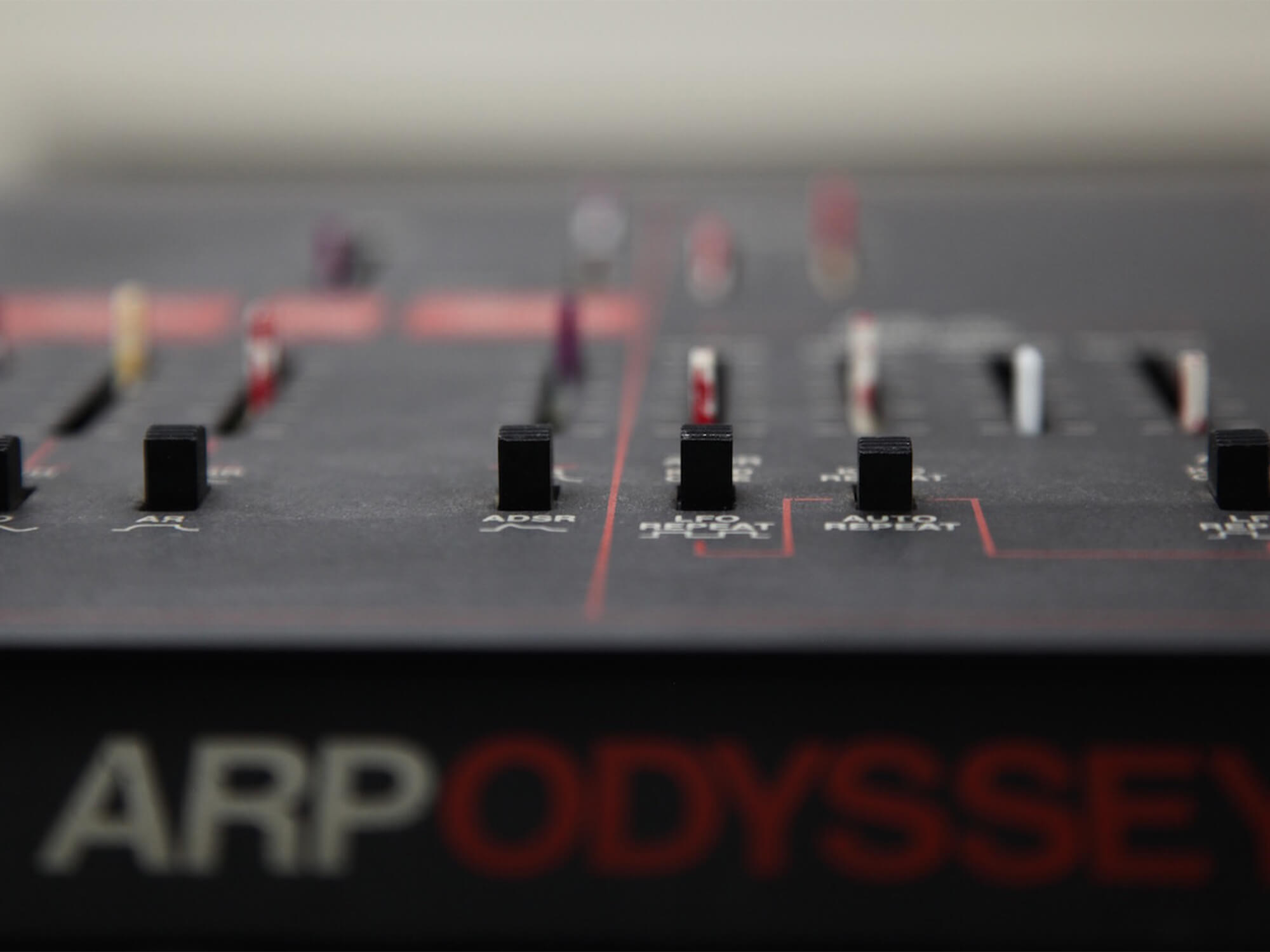 Invest in monitors, a soundcard, sound absorption material, acoustics and soundproofing above anything else. Without proper consideration to these, you’ve already lost the battle.

Principleasure’s II will be available from 18 October 2021.