Show Off Your Studio: Paper Dragon craft roaring sounds while they’re in The Dog House

The Bristol-based band let us into their rustic studio and explain their process as an electronic four-piece. 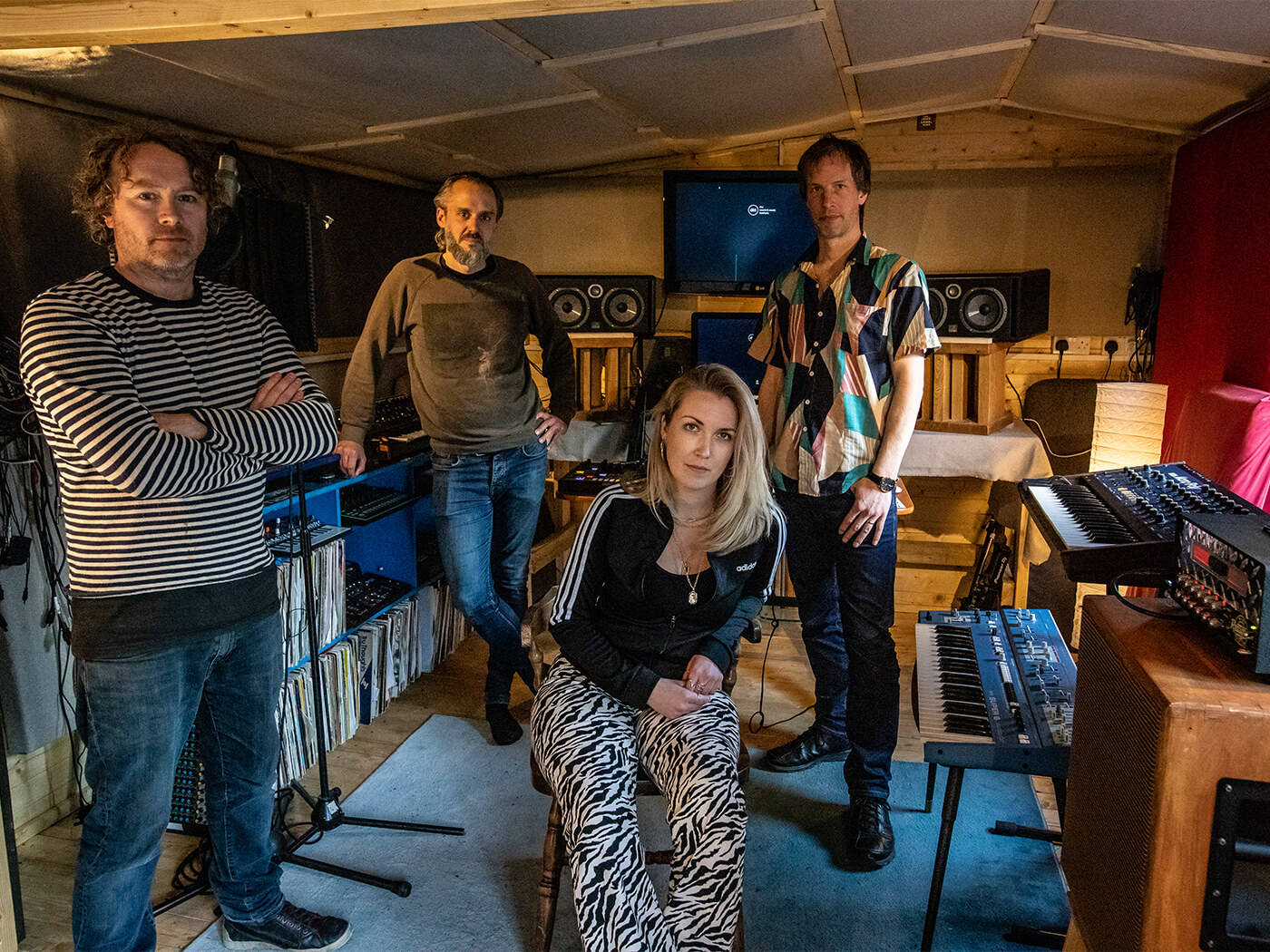 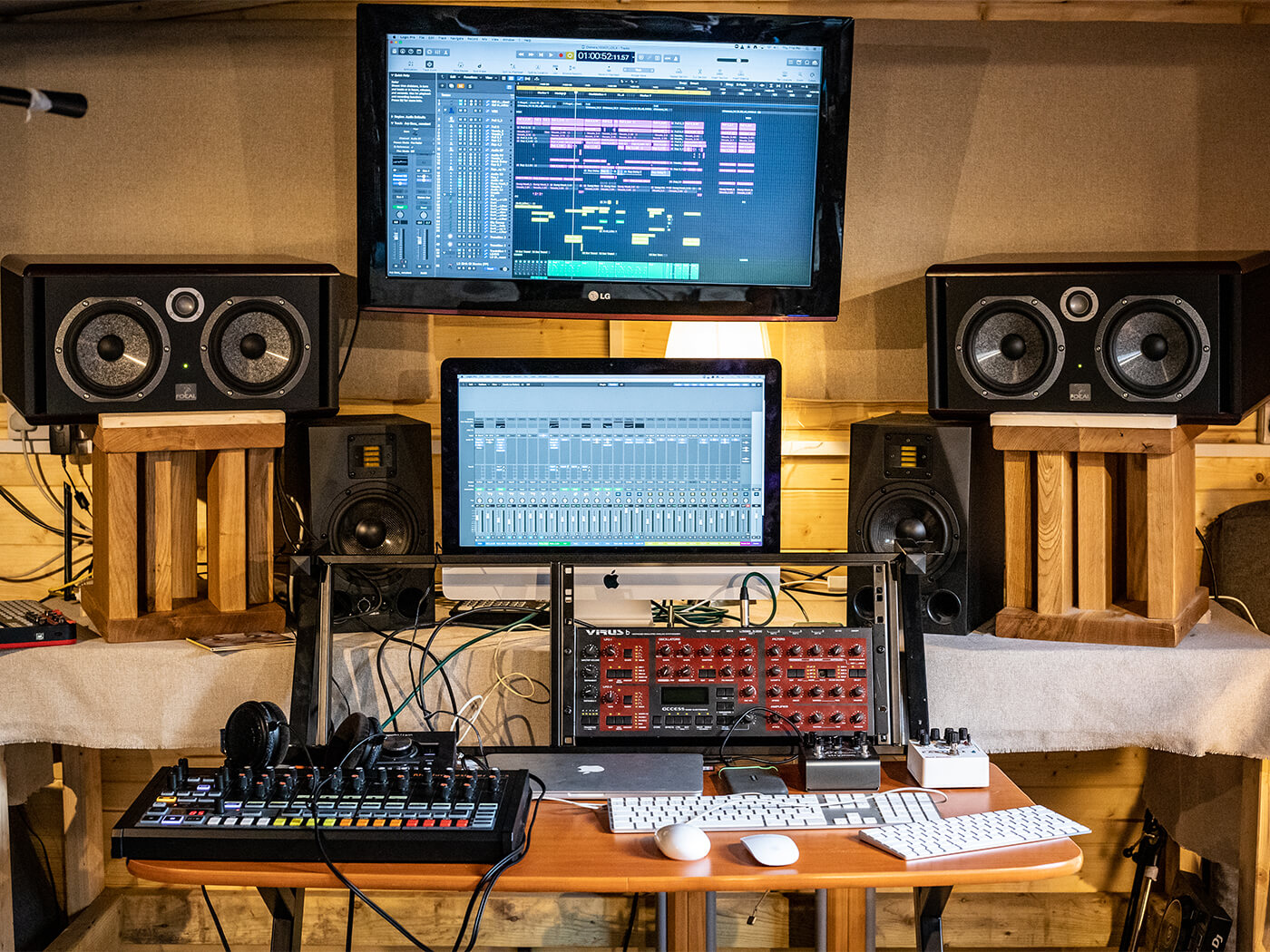 Bristol-based Paper Dragon is a four-piece electronic act pumping out high-octane beats, with vocalist Ruth Royall at the helm. Having released on renowned labels such as Hospital Records, Shogun and Spearhead, Ruth has immersed herself in the UK jazz and drum ‘n’ bass scenes. Bruce Turner, Kris Burton and Jonathan Savage, who join Ruth in Paper Dragon, have worked with the likes of U2, Kate Bush, Massive Attack, Rick Rubin, Brian Eno, Underworld and KOAN Sound.

As the group celebrate their recent release with liquid drum ‘n’ bass icon, Grafix [Fred V & Grafix], we head to Paper Dragon HQ, also known as The Dog House. We learn why the UDO Super 6 has been vital for the band’s new EP, how they refined the acoustics of the studio and why you should honour your original vision.

Tell us a bit about the studio, Paper Dragon.

The studio is in Bristol. It’s brand new and we are developing this as the central Paper Dragon HQ. We also use it as a creative space for the band and other commercial projects to form. Until recently, we have been using other studios in Bristol and surrounding areas. We always want to be producing with high-quality equipment and good aesthetics so we needed a space to be able to listen and produce at a critical level. The four of us have our own home setups as well.

This space is used creatively for ideas, mixing and arranging. When we need to track live musicians, we use studios such as Real World, dBs Pro, Invada and Music Ape, which have been great for capturing performances, such as piano, strings, brass and vocals. Although now we tend to capture small bits like vocals and guitars in the new studio. We tend to send our mastering to friends Christian Wright and Alex Wharton at Abbey Road Studios. 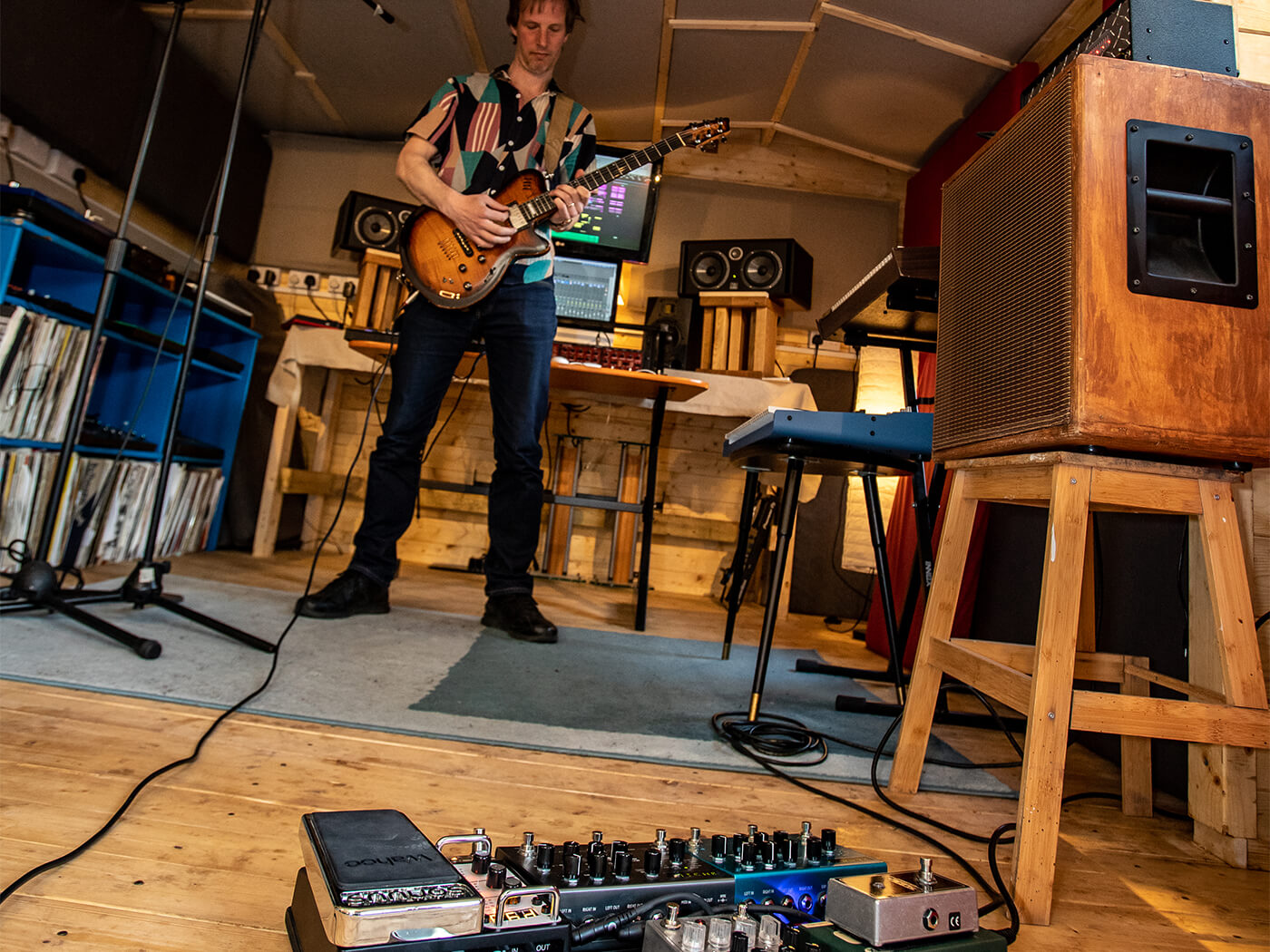 Pro Tools to record and finalise mixes, Ableton Live for creative inspiration and live performance, and Logic Pro X mainly for arranging. As there’s four of us, there’s a range of preference, so we regularly use all three. We are fortunate to use the best parts of each of these DAWS. 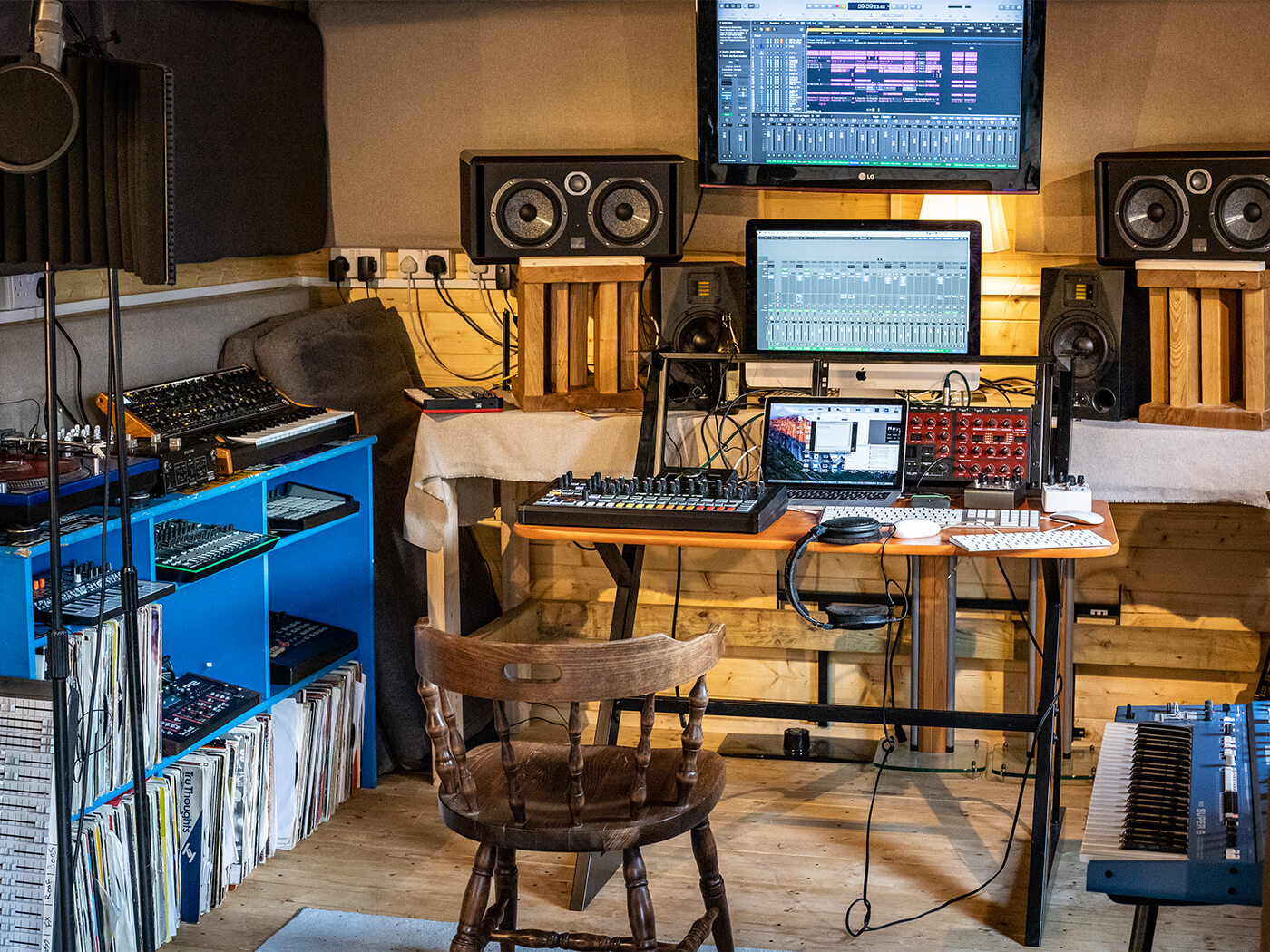 Neumann U87, because the music mainly revolves around the character of the vocal sound. The U87 has a rich and full character and bites through the mix perfectly. The U87 also sounds awesome on the guitar amp (Mesa boogie rectifier). We also use an AKG 414 in mono configuration and stereo pairs for piano and room sound capture.

Visual inspiration plays a big part. Ruth’s studio is very visually vibrant, and it has dalmatian wallpaper, blue lighting for arranging, but yellow lighting for getting in the performing zone. For sonic atmosphere, the right reverb is essential for feeding the vocal performance. This means getting the recording as dry as possible (using a reflection filter), and Valhalla Vintage is Ruth’s go-to plugin – which she absolutely loves.

Humour is very important (mainly Jon and Kris’s off-key comments!), and we feel it’s essential not to take ourselves too seriously.

What synth was essential on your new release with Grafix, Forget The Rain?

The synth that makes up the bedrock of Forget The Rain is Sequential Circuits’ Prophet 6. We love this synth – Grafix has it in his studio. The lead line and pads have all those classic Prophet characteristics; they cut through a mix and sit so nicely. In fact, it’s the same Prophet 6 that’s all over one of our first tracks, Be Free – Jon borrowed it from Grafix for a while when he was working on the Fred V and Grafix live tour.

What does your collaborative process look like at the moment as a band and with other artists?

Zoom! At least, in the last year – maybe that has come to an end now (please!). Collaboratively, nothing is really set. Jon might have some lyrics or a synth sound; Bruce may have a track ready; Ruth may have a vocal arrangement and chords. Whatever happens, it inevitably ends up with Kris rearranging and sculpting to finalise the track with his remarkable production prowess. Collaborations outside of the band are also diverse – everyone has their way and their individual quirks.

What’s been the most significant investment in your studio?

The Dog House – this is what the studio is called (we’re all in the doghouse). It’s actually built in loving memory of a dog. It cost around £14K to build, including the treatment and foundations, but well worth it. We can all collaborate in real life again, and it’s nice to have all the gear set up and ready.

Ruth’s vocal cords routed to some bellows – this would be great for developing song ideas. And, when isolation psychosis sets in after a while, they might be good for simulating conversations, too.

For the most part, it was the coverage of all surfaces with 100mm Rockwall. The ceiling and all three walls are covered in Rockwall panels. We then created panels that can just hang on the archway between the lounge room and control room. Then, vigorous testing with tones and the use of the software REW and speaker placement were used to find problem areas. At first, we found a problem around 70Hz and 122Hz, so we bass-trapped the corners of the room and adjusted the speaker position further off the wall. Surprisingly, this made all the difference. We were going to put a floating floor in but found there was no need, which could be down to a lot of luck. 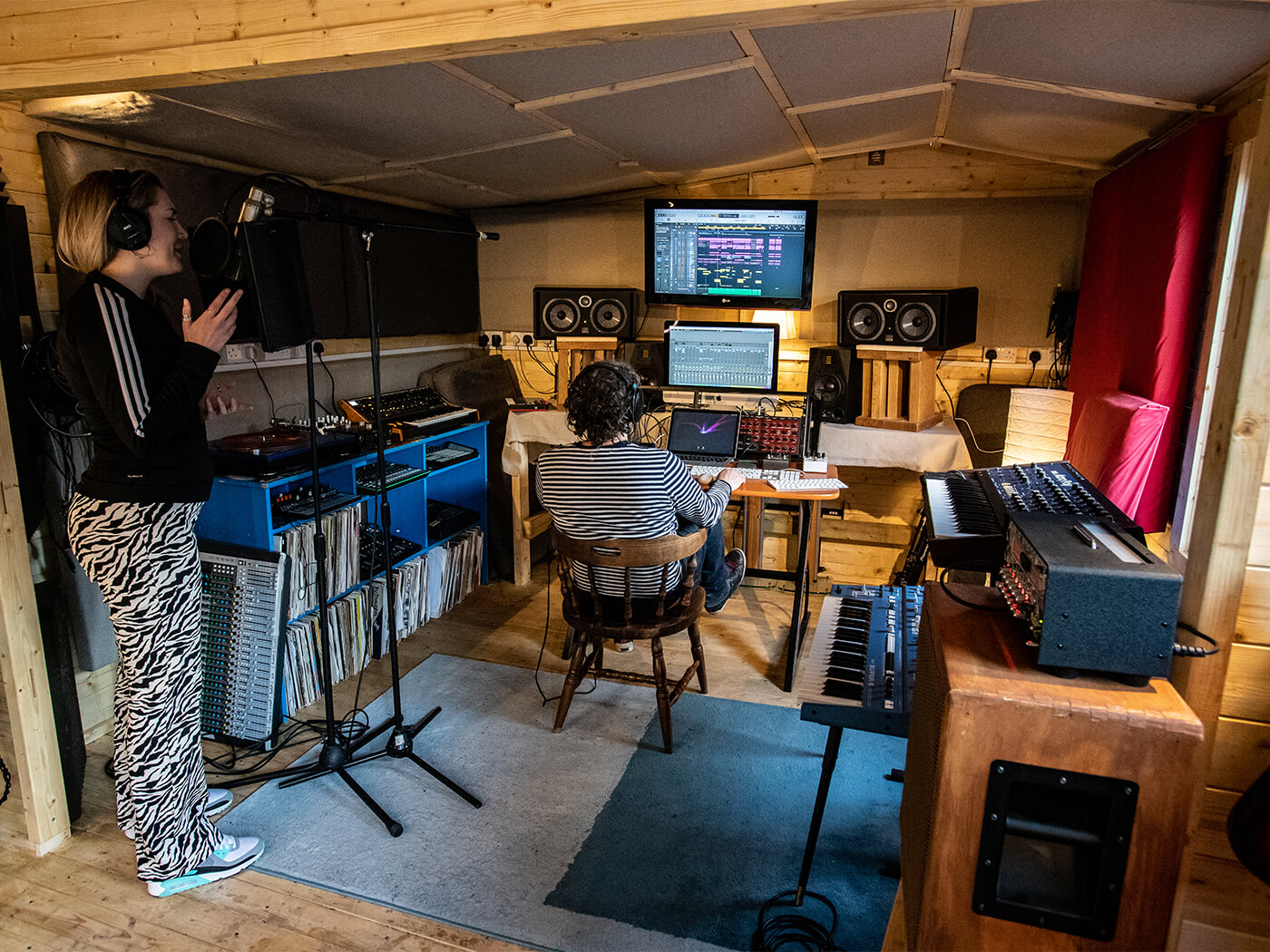 We have also captured a variety of recordings in our home setups using whatever elements we have to get the acoustics sounding great. Recently, in Jon’s space, we hung drapes and used curtains to create a vocal booth and used our ears to make sure the recordings sounded effective to work with.

Next on the shopping list is the UDO Super 6 – we have been fortunate to have been lent one. it’s a new Bristol-based synth company and this thing is a dream to use. It is all over our next EP, featuring heavily on some of the tracks. We have also been using it for stripped-back live video versions of some of the tracks. The synth has digital oscillators, combined with analogue elements to create a massive sound. For us, it sounds and feels a little like combining Native Instrument’s Massive with a Roland Juno and Prophet 6. 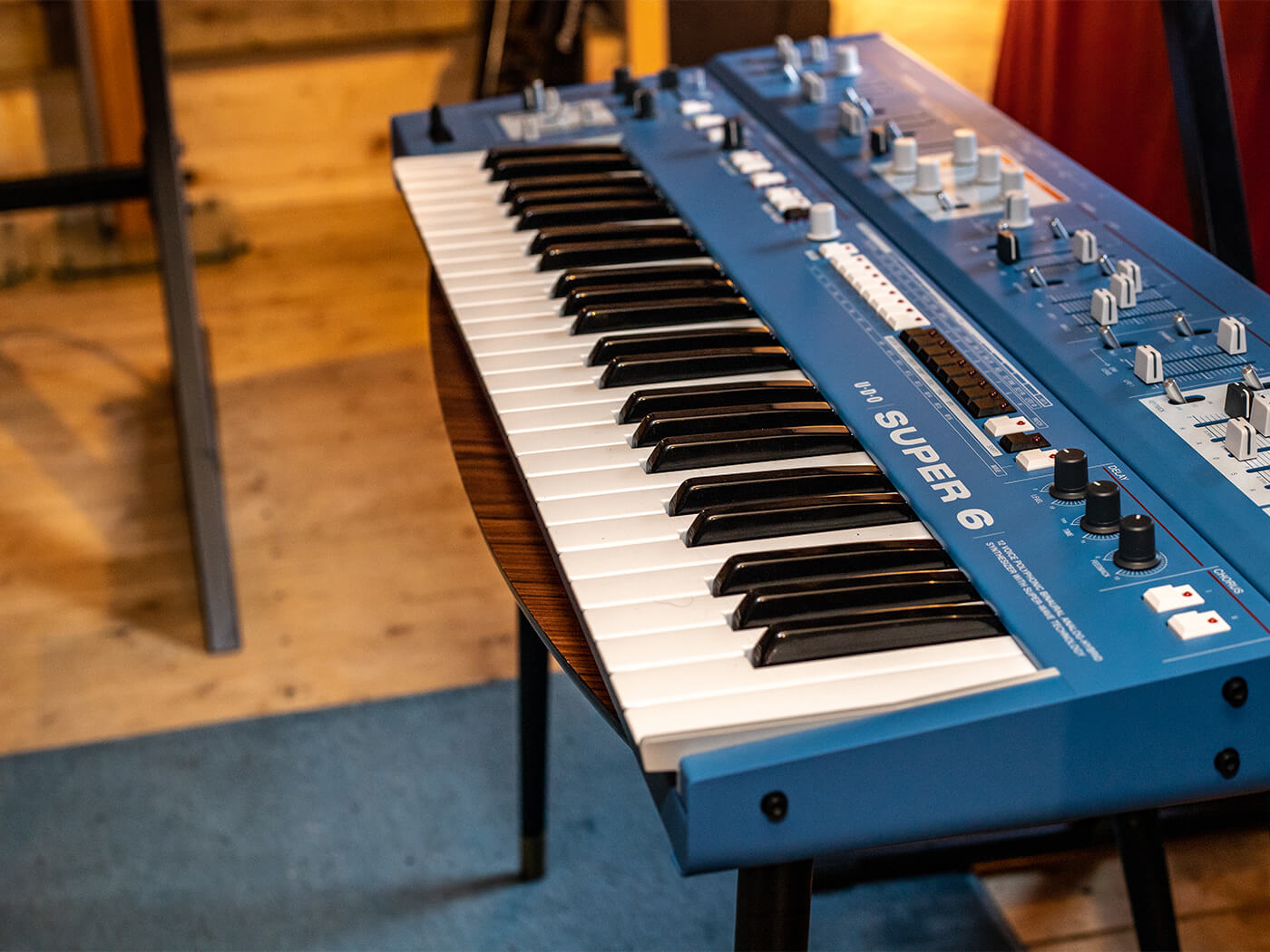 ATC SCM300A Pro’s – the most linear and revealing speakers that we know of. This would really require a bigger studio though! Like BT’s studio, for example.

Start with something simple and expand it out. It’s so easy to over-complicate things, especially with four perspectives. Often, it is best to honour the original vision as clearly as possible and to enhance and develop this without convoluting things (with too many instruments, effects, layers and so on). It’s easier said than done but, ultimately, this lets the tune flourish. 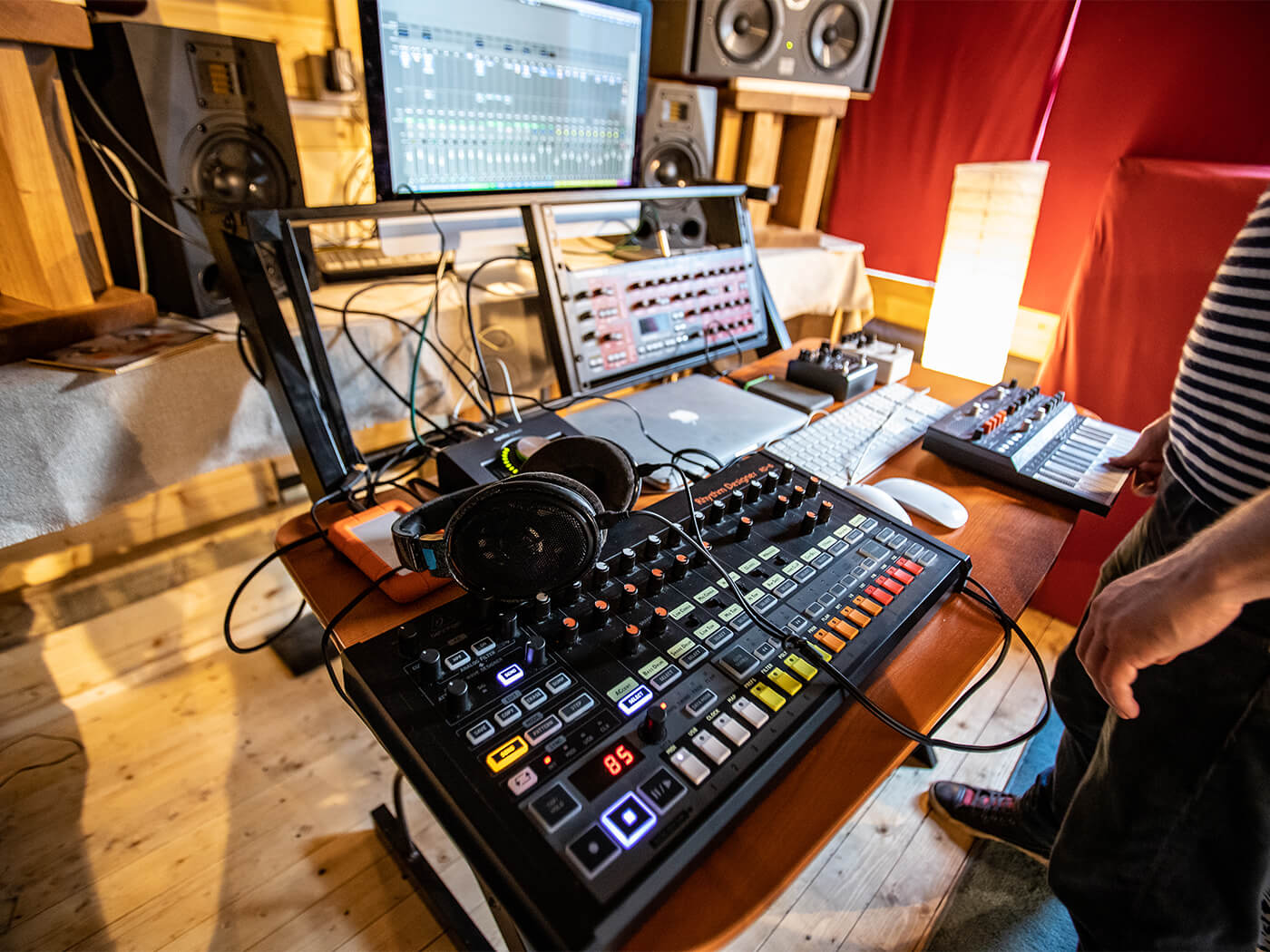 Learn as much about acoustics, especially trying to get a linear response from your speakers and the room. It makes the production process much clearer and can minimise surprises when sharing music with collaborators and publishers, or when you visit the mastering house. Accurate listening is key. Check your mixes on other speakers and cross-reference commercially released music. One easy way to A/B with released music is to place a limiter over the mix bus and turn it up to the same level. It’s a winner.