Show Off Your Studio: GOOSE’s Safari Studios is where electro dreams take shape

The Belgian electronic rock outfit invites us into their spacious studio and share their creative wisdom. 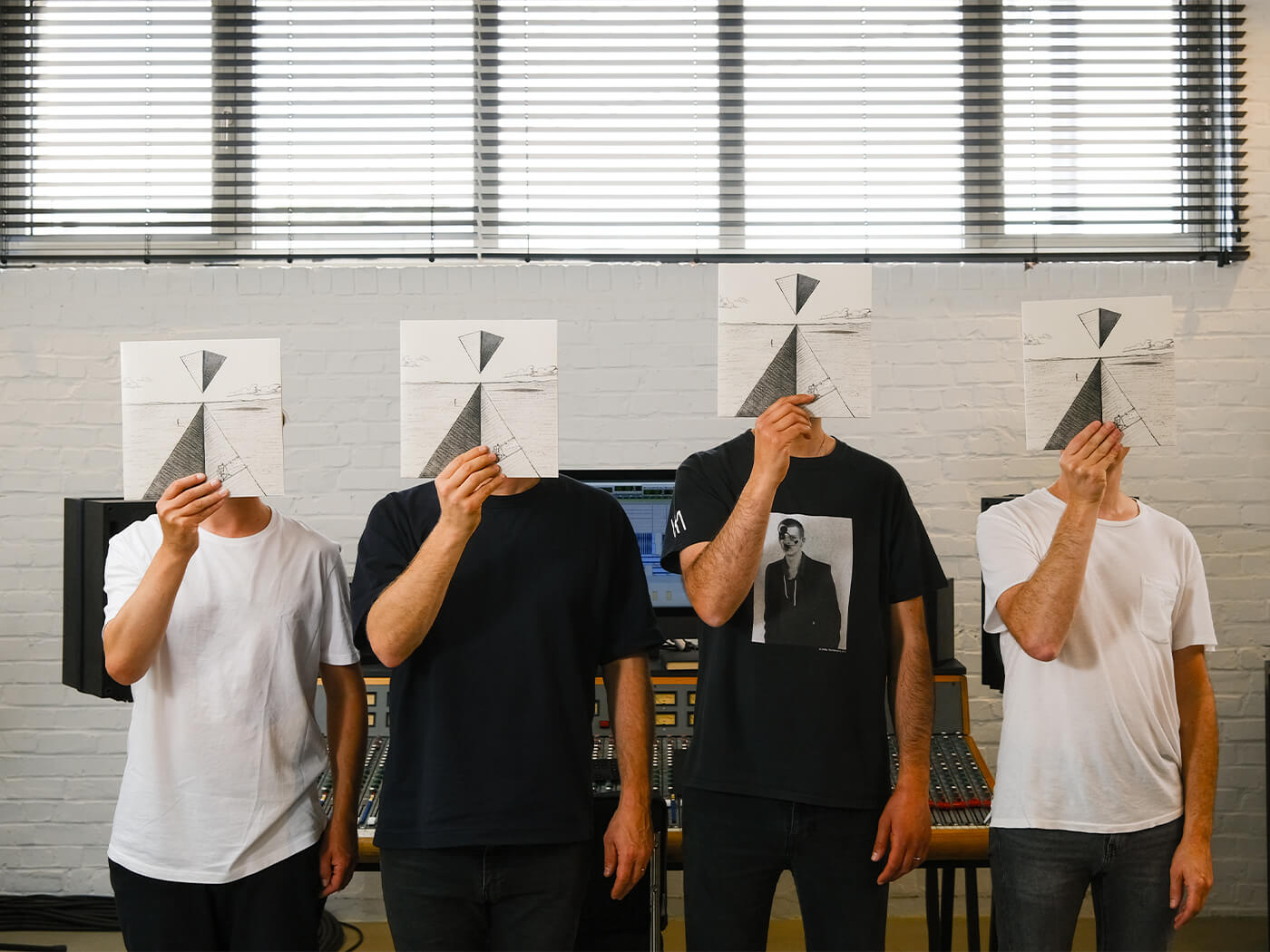 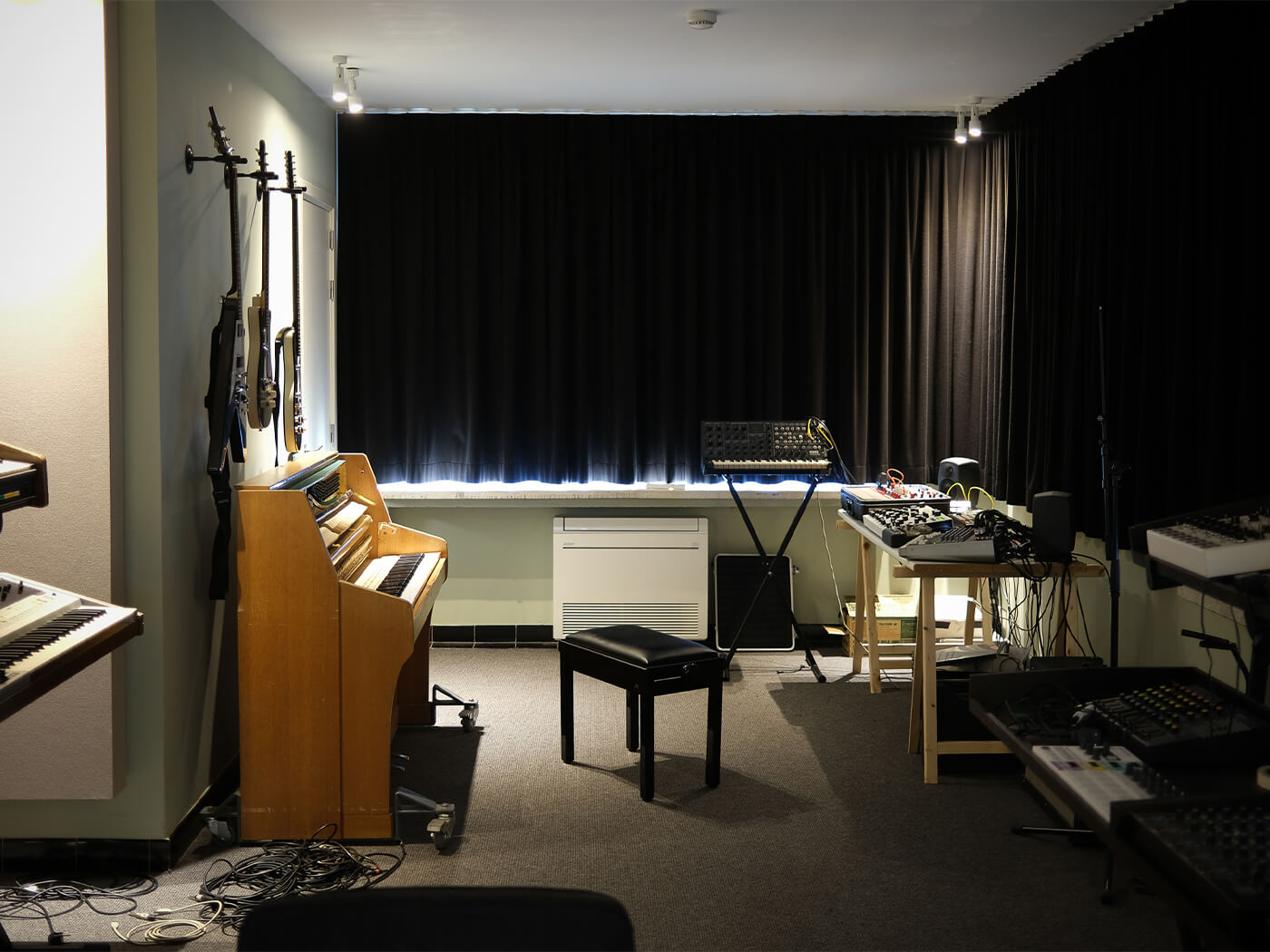 Hey, GOOSE! What can you tell us about Safari Studios?

Originally, Safari Studios was located above a pub that used to be an ancient hotel.
Three years ago, we bought this old warehouse/car garage located in our hometown of Kortrijk, Belgium. We spotted this unique building much earlier and immediately fell in love with it when visiting it for the first time. The building itself was in pretty poor shape but the foundations were really good, so we stripped it and renovated it into a real studio with the same aesthetic. 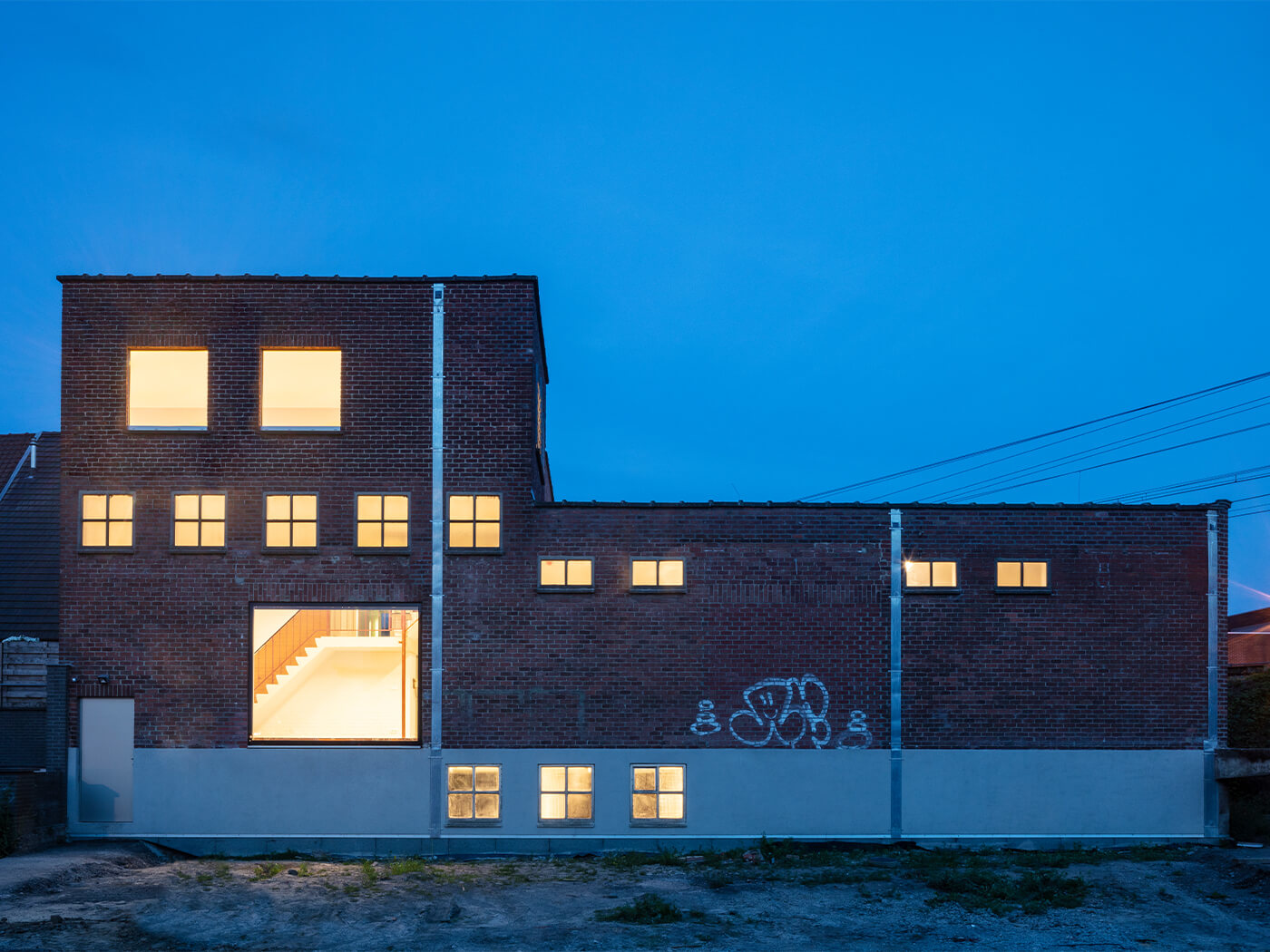 You have a vast amount of impressive gear. How do you decide on which instrument and effects to use on a project?

Sometimes we have a set up in mind when starting a new track project or album. We put some time in it to make it happen, but despite our efforts, we mostly tear it apart after a couple of days. We’re a four-piece band so one master setup feels limited. When we think of an instrument, we just connect it and do a couple of takes with it.

How much does the gear influence the band’s sound?

We have to admit, we really love gear in all its aspects. We’re really sensitive on how it sounds and looks, but mostly on how it feels when playing it. We’re using a lot of analogue synths from the 70s and 80s but this also could apply to a cheap upright piano or a crappy guitar from a department store. As long it has character, it’s good for us! 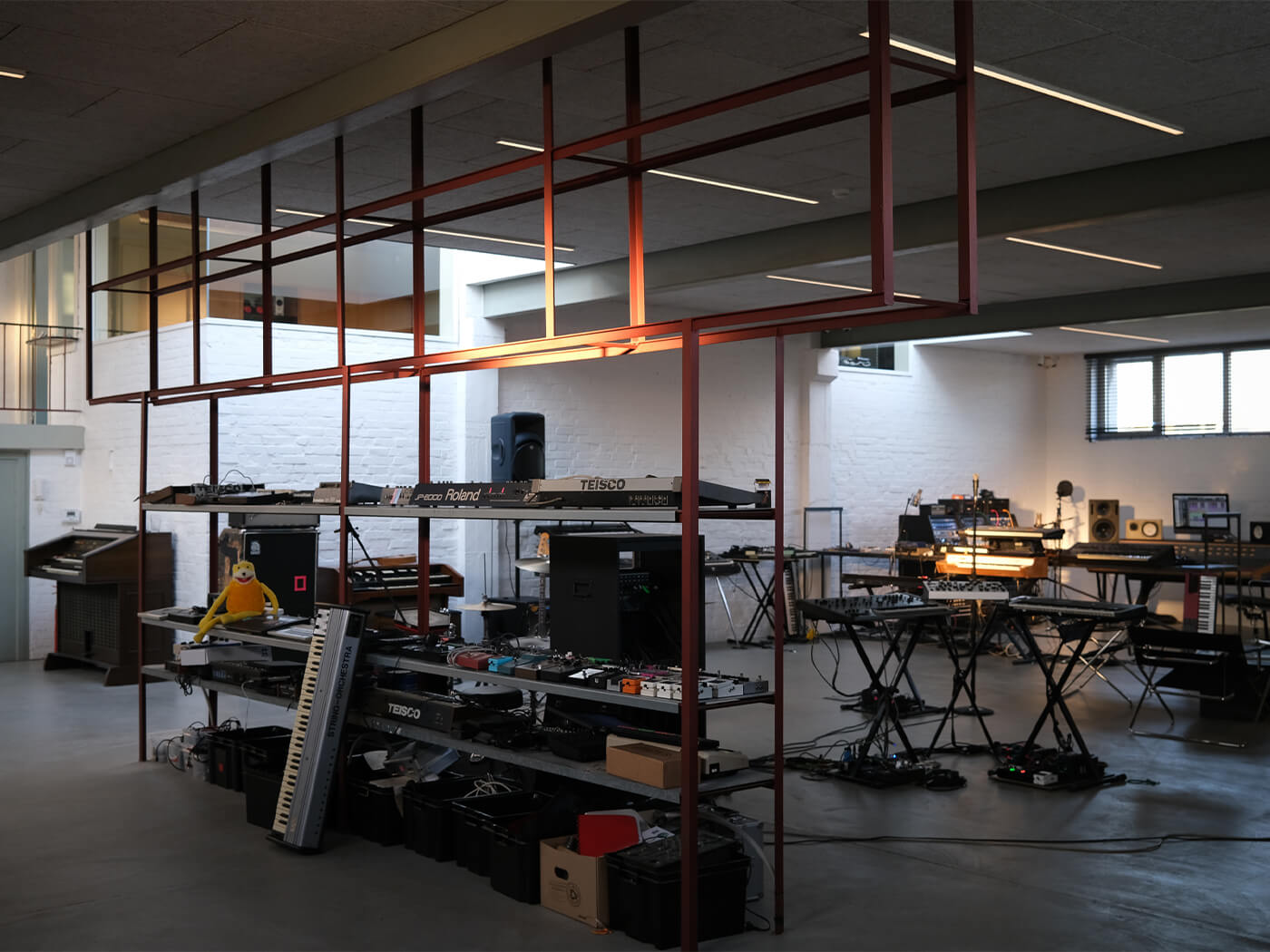 What’s the creative process of the band in the studio?

There’s no particular way of working or rule we follow. One of us will be recording a demo on our own or we’ll start an idea with two of us or just by jamming altogether. Basically, in our studio, we don’t limit ourselves to our main instruments. Everyone can be the singer, drummer or bass player. The right take or attitude stands above egos – maybe that’s the only rule we live by. 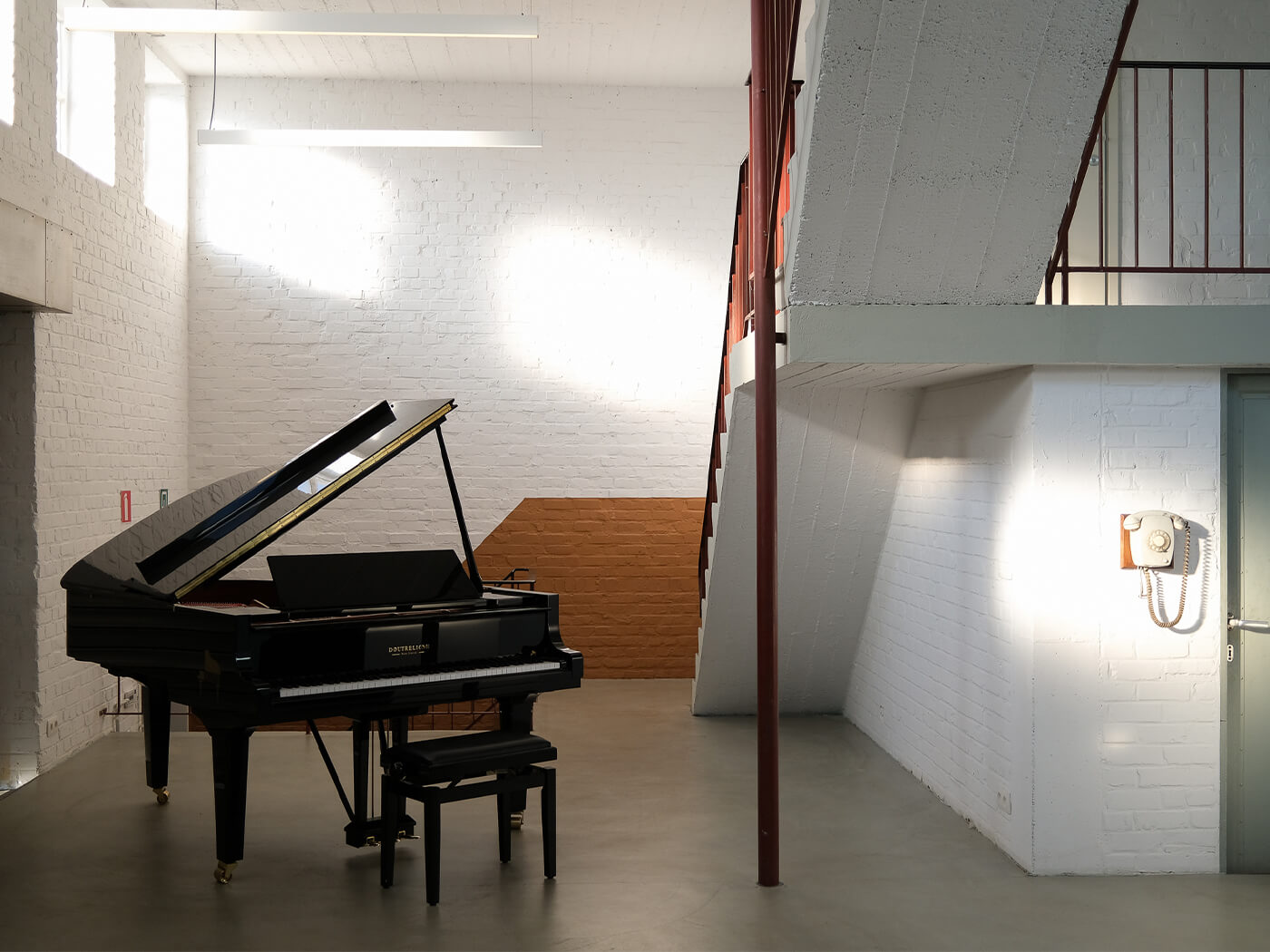 Which DAW do you use? How much of your sound is created ‘in-the-box’?

We’ve been using Pro Tools since we bought a computer in the early 2000s. Mainly because we had friends who were using it and we didn’t know anything else. We’ve used it in many different ways and it became a real asset for us. Since the beginning, we’ve used the DAW to make collages by cutting and pasting; we used it as a real musical instrument. 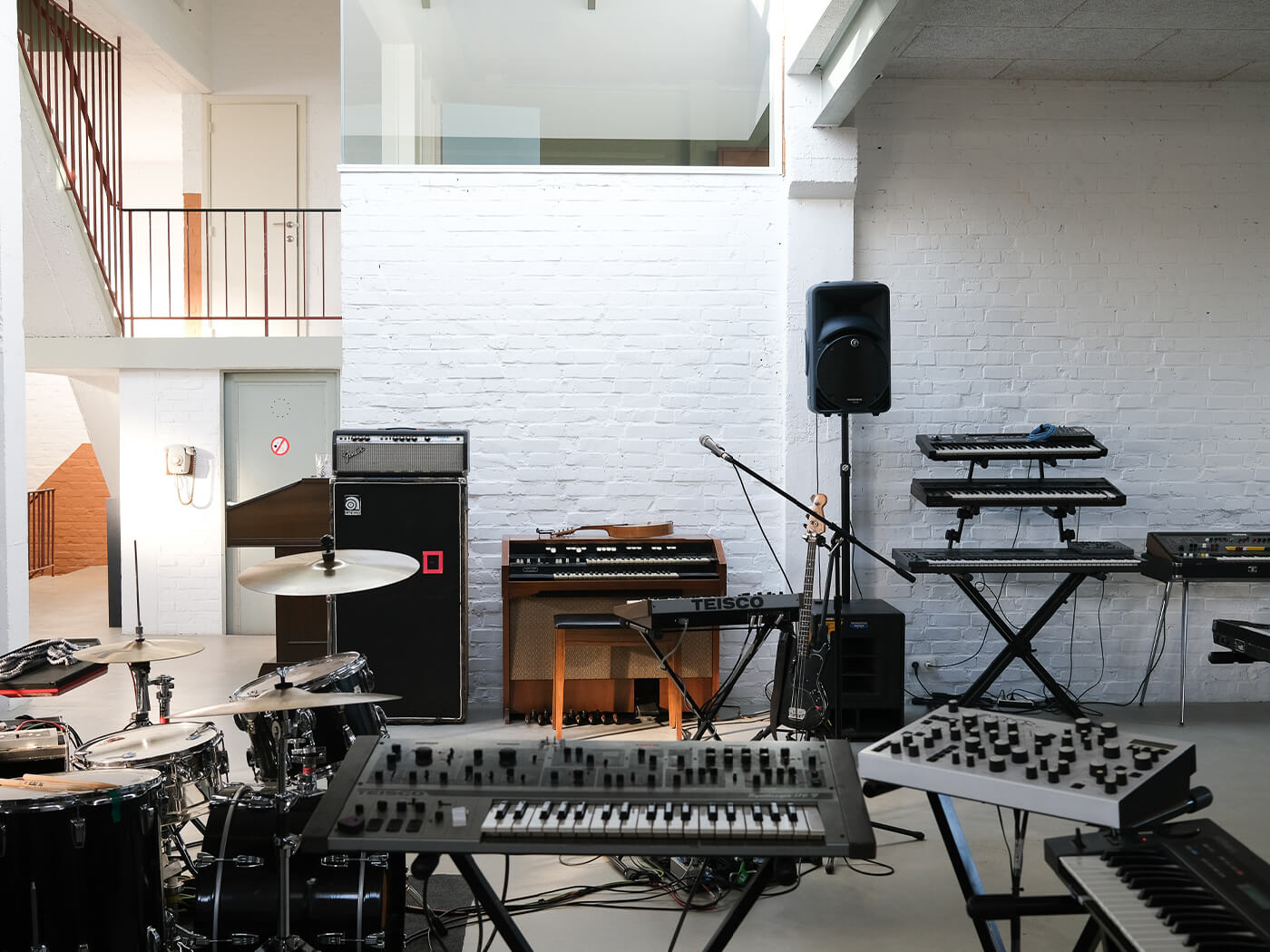 Nowadays Pro Tools is mainly used as a recording and mixing tool. We’re using plug-ins a lot for compression and EQ, but for reverb, delay and modulation we always end up using real outboard. It’s simpler, with fewer options to choose from and it instantly adds more harmonics and uniqueness to our mixes. We love plug-ins, but we feel every hardware machine sounds slightly different. We remember Philippe Zdar saying: When some software is really good, everybody starts using the same tricks and you’ll all end up with something similar”. We can relate to that.

For the first two albums, we worked a lot in the evening and at night and went partying afterwards to test the music in the club. The idea of working all night is very romantic but eventually, it will ruin your body.

Now we have a much more structured schedule that works really well; we’ll meet at 10 am, have some coffee first and start messing around until around till 5 pm. When there’s a tight deadline we’ll work until it’s finished obviously. It’s exciting and never clear when that will be. 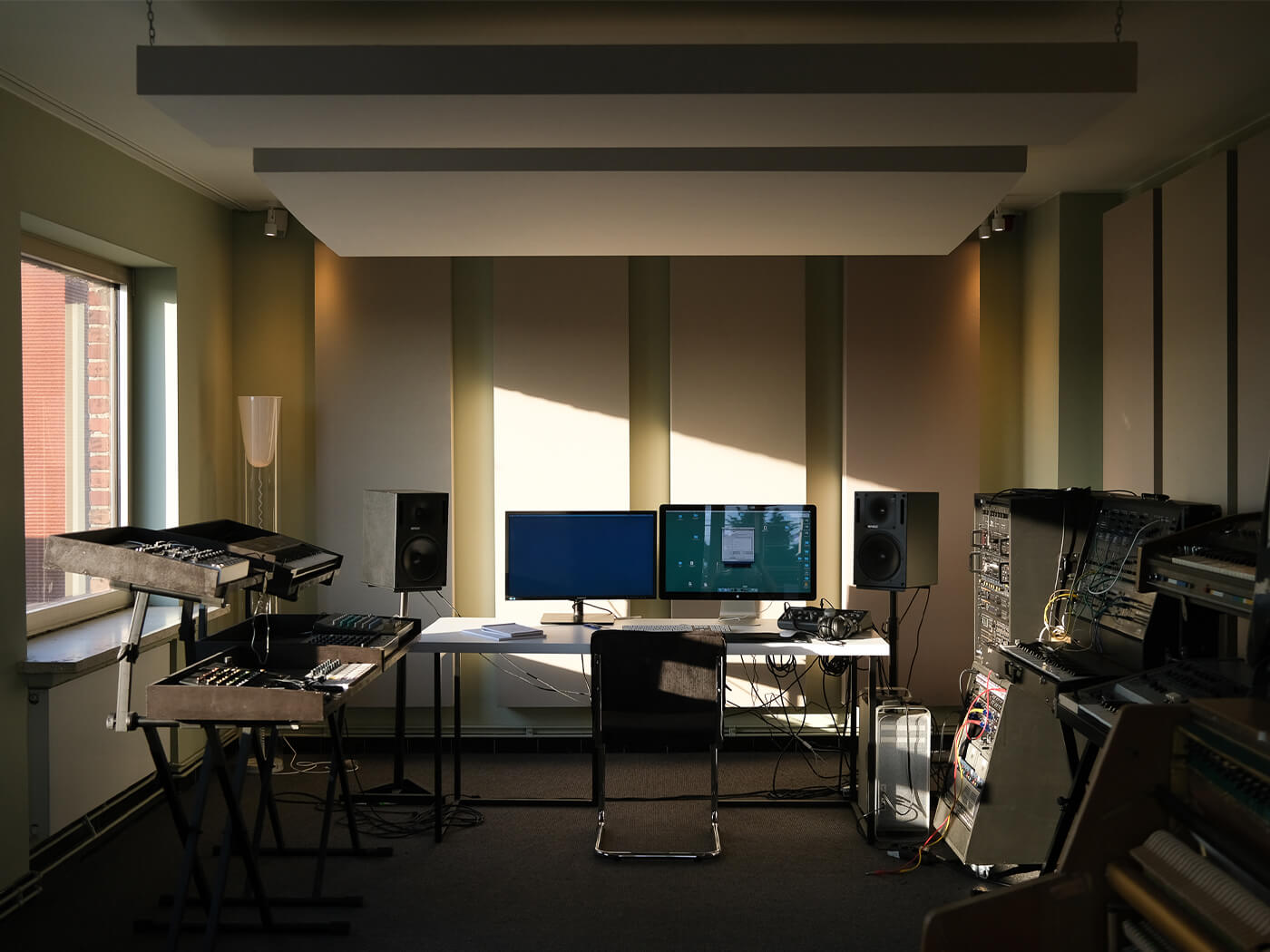 Honestly, we didn’t spend too much time searching for that perfect studio sound because we felt the natural sound of the room was already pretty decent. Our main room may look big and sonically odd but actually the sound is really good and natural because of it’s trapezoid shape. It’s not perfect but it was never our intention to create a clean sterile environment like a typical commercial recording studio.

A studio or workspace should be an atelier where you feel space and light – a place where you can breathe and create. It should feel like our own universe and where we can forget what city or country we’re in. There’s beautiful natural diffused light entering, and it never looks the same.

Sometimes there’s an LA vibe, sometimes it feels we could be located in Berlin. We really love that idea, it’s inspiring.

The Arp 2600P Grey face we bought a decade ago. It sounds like it has a soul and it’s so well designed, it’s a blessing to spend time with this synthesizer. If you’re patient and treat her with love, the Arp will give you so many magical music moments.

It will probably be more boring stuff like X stands, jack cables and MIDI connections.
Now we tend to make smaller setups all over the building, so we’re always short in that kind of stuff. 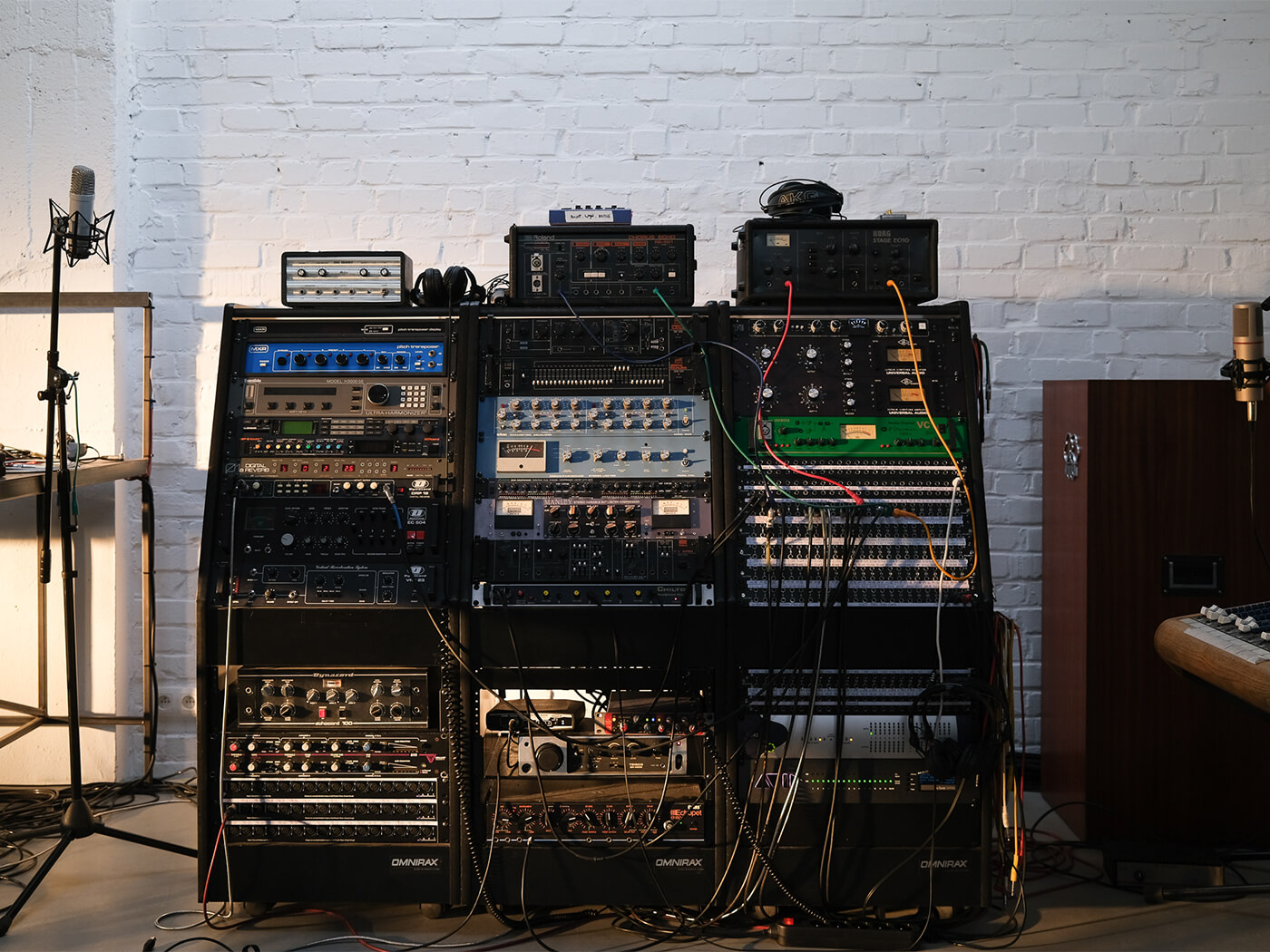 Although we’ve collected a decent amount of gear throughout the years, we don’t want to become collectors stuck in a museum. We’re not so interested in buying new instruments all the time. Vintage gear has become so expensive and overpriced nowadays anyway. Sometimes we can all be particularly greedy in discovering and learning new instruments, mostly synths. Until we recently discovered the hidden world of piano. That will keep you busy for a while!

No, it’s never perfect, sometimes it’s a hassle to just get sound out of the monitors and there’s always something broken, but we think you have to embrace that little struggle. It’s part of the process. It’s music, things don’t always have to go as planned. So, we don’t believe in the ultimate set up, it would bore us really quickly.

We had the privilege to spend an afternoon with a Roland System 700 modular system a while ago. Mind-blowing experience! So, who knows. One day…..yes, please! 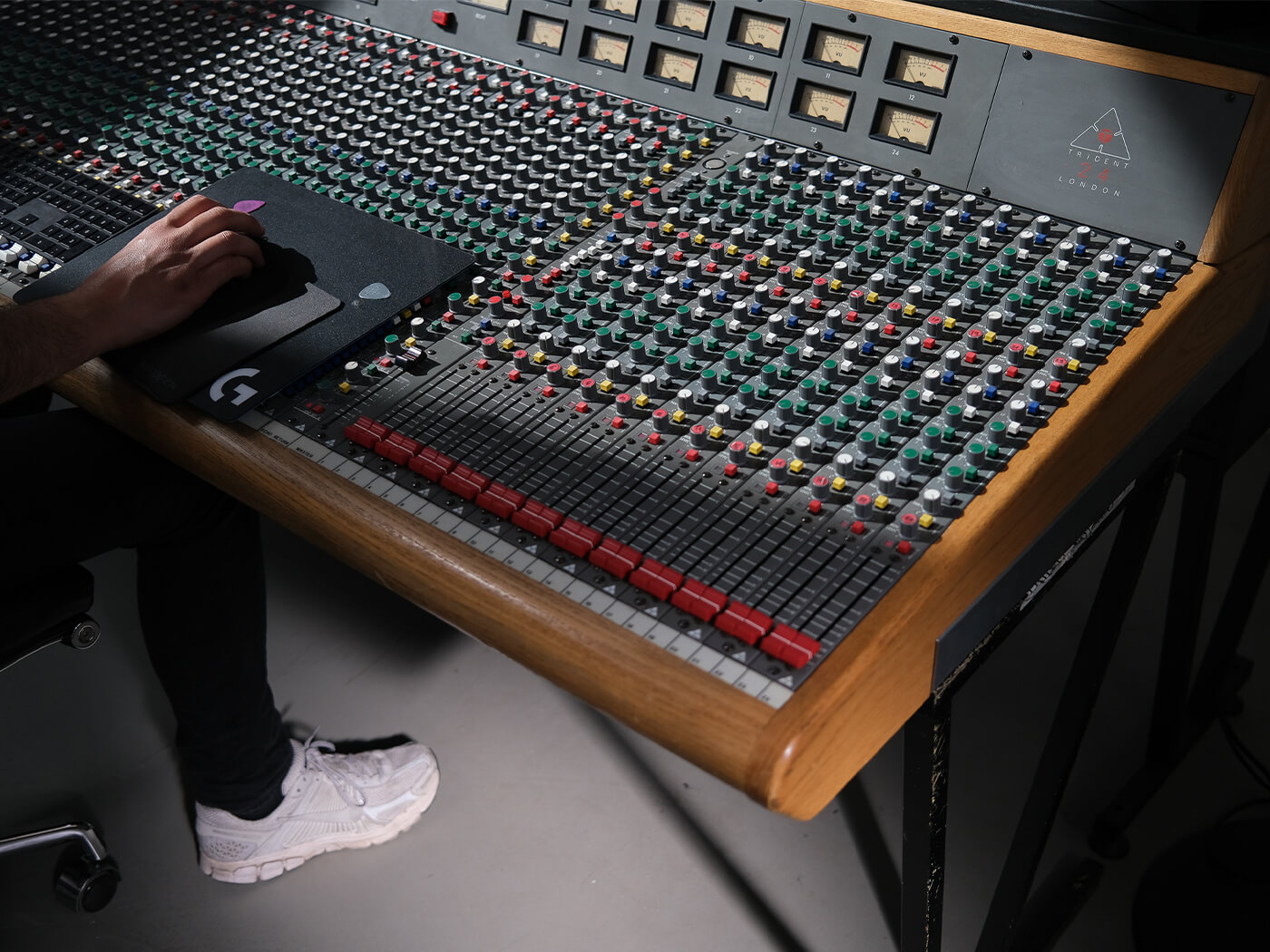 Can you tell us about the upcoming release and a little bit about the creative process?

We’re finishing two new tracks for our upcoming EP as we speak. When there’s no haunting deadline in front of us, we’re just creating endless ideas and demos. One month before we have to deliver something, we wake up and choose the idea that feels the best for us all. We are always short on time and that way we are forced to make quick and brutal decisions in a track. That hurts, but it’s the only way to move forward and lifting the track to the next level, we think a lot of artists will recognise that.

It’s ok to be naive and making impulsive non-conventional production choices as long as you enjoy it. In many cases, it will give you much better results than searching for the right kick sound for hours. Trust me we’ve been there! Another piece of advice Zdar gave us during the writing of our album, Synrise: “Take risks, because what sounds experimental to you is just ‘normal’ to most people.” 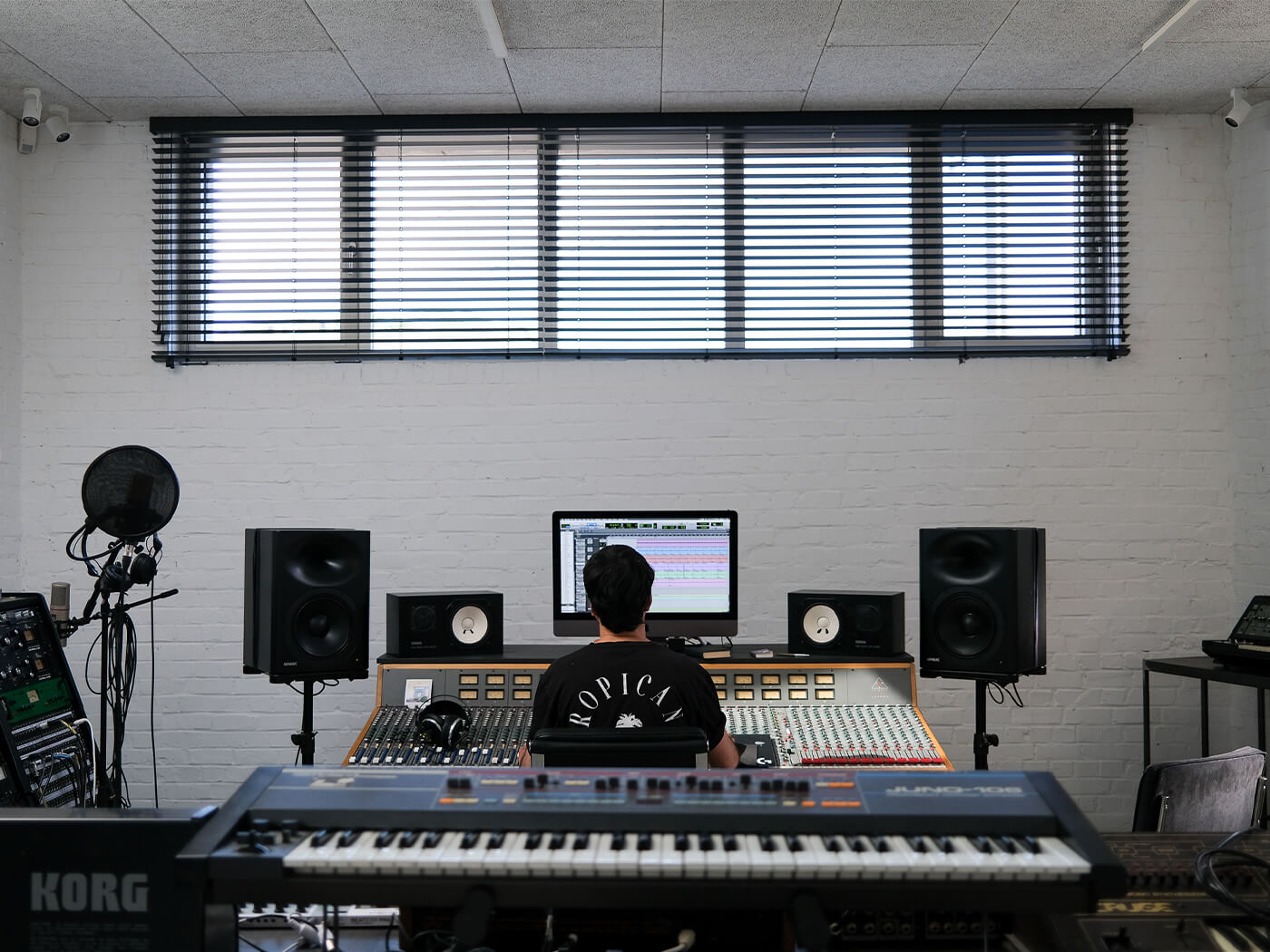 What piece of advice you would give someone starting out building a studio?

Buy a device where you can record your music. A computer or even a four-track cassette recorder will do. Listening to what you did afterwards will help you a lot moving forward.

Lastly, what’s the first thing you’ll be looking forward to once lockdown ends?

To be in front of an audience on a stage again with each other and do what we love the most: playing live together! 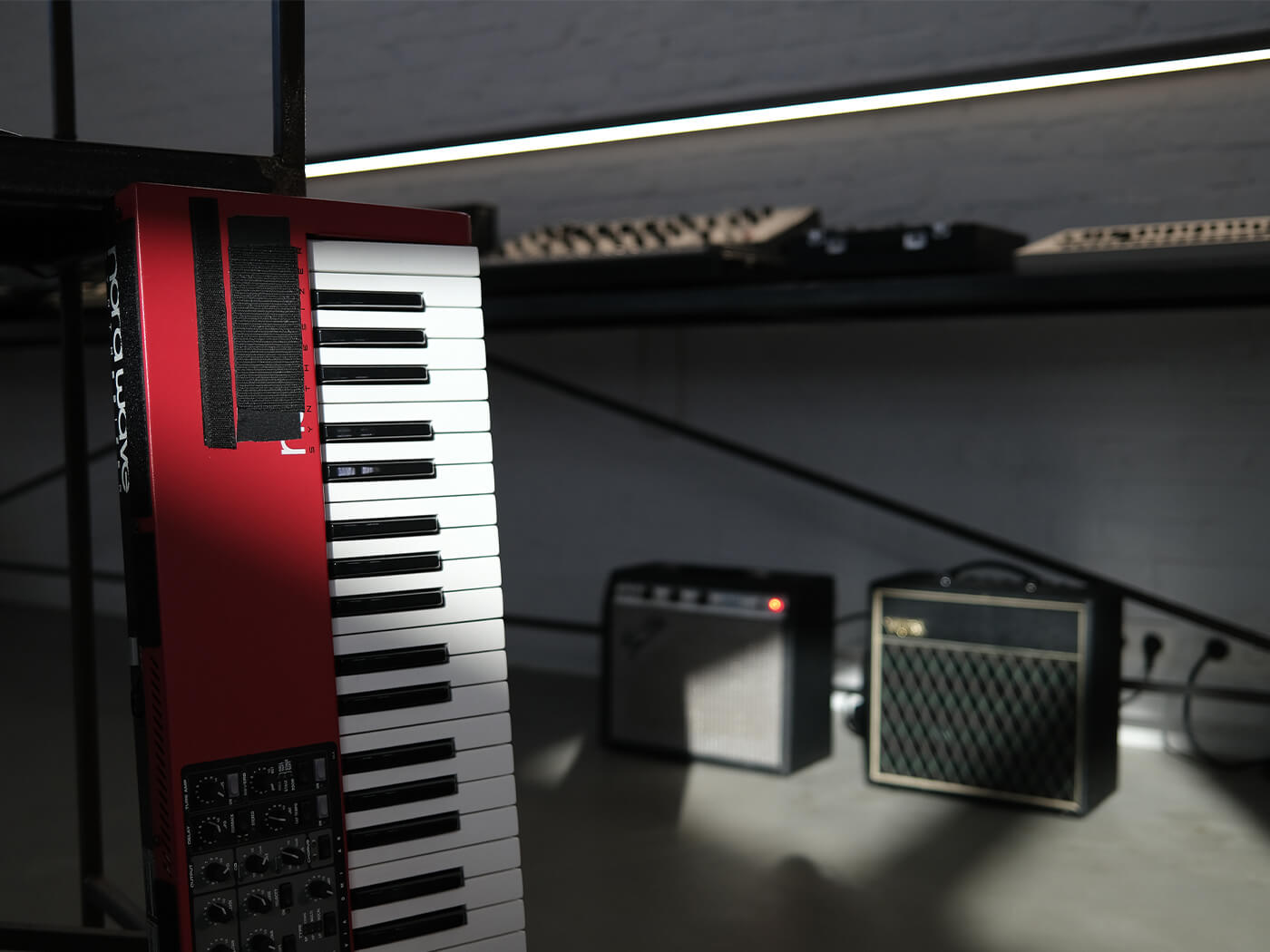 GOOSE revisit their ‘Heaven’ single with a revamp this July. The band provides their own ‘club edit’ alongside a remix from Italian electronica artist Fedele. Available on 3 July via Safari Records / Universal Music Belgium.