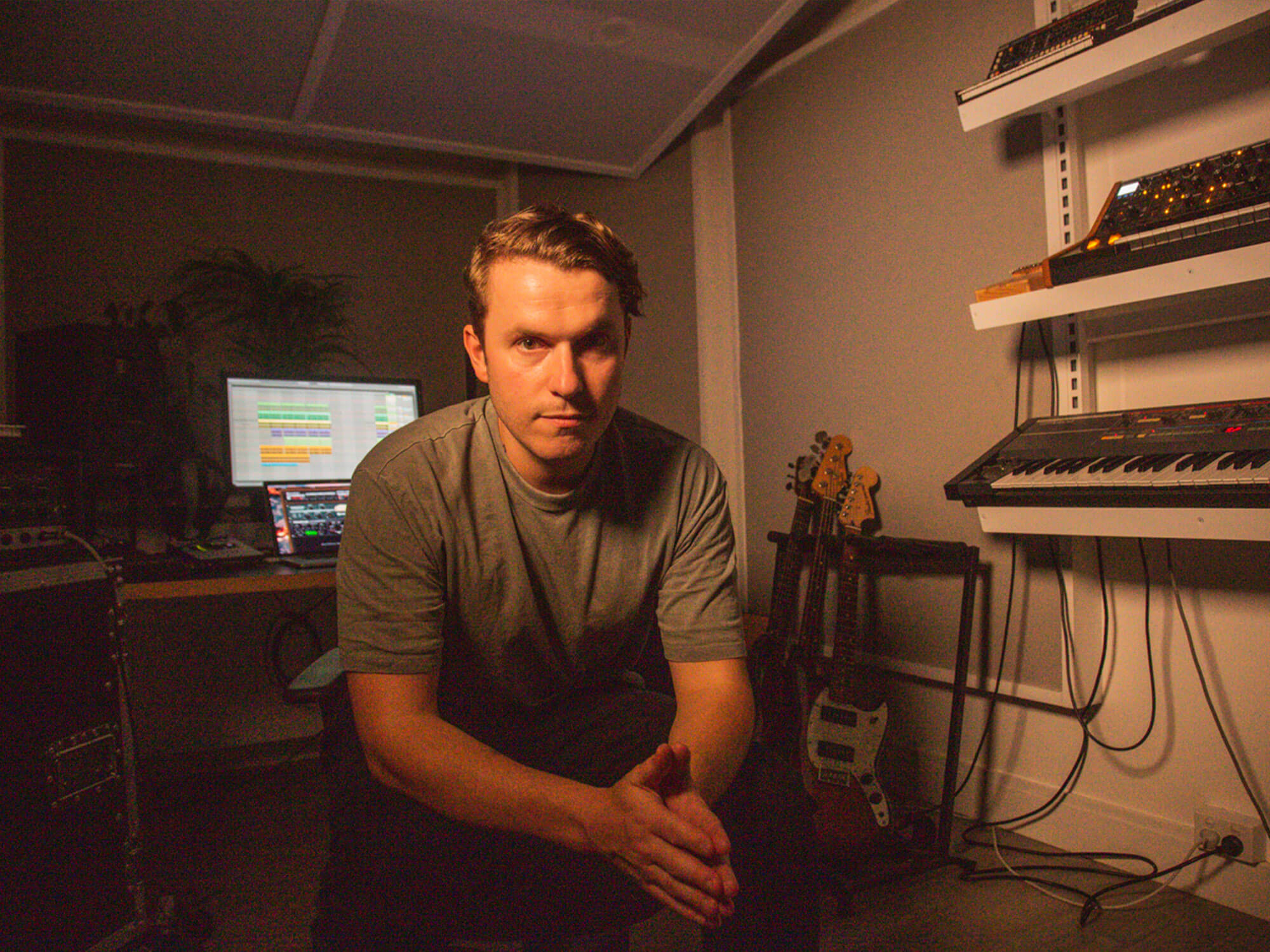 Show Off Your Studio: edapollo on his Blue Spring remix EP and adjusting to life in Melbourne

Following the release of his recent album Blue Spring and ahead of the release of its remixed edition, Ed shows us around his Melbourne studio and explains how being a visual artist helps his music-making process. He also gives us a glance at some of his most prized pieces of gear, tells us his desert island musical item, and talks about life in Melbourne.

Hey edapollo! How does it feel to hear your tracks on Blue Spring reimagined in the album’s remix edition?

It’s always awesome to hear other people reimagine my tracks. I love getting fresh perspectives from other producers. It’s exciting because you never know what they will come up with, so it brings new energy to the original ideas and allows the music to go further beyond what you’d initially imagined.

What made you choose these artists to remix your music?

All of the artists are talented and lovely people that I enjoy chatting to regularly. I feel lucky to have found an amazing online community of like-minded artists over the last couple of years, and remixes are a great opportunity to collaborate.

I wanted to pick a range of stylistically different producers to keep the remix EP eclectic and interesting. They all have distinct styles and sounds, and it’s been awesome to see them let loose with the stems and hear the magic they’ve created.

You recently moved to Australia from the UK, right? How has this change in location affected your workflow and approach to music?

Moving to Australia has had a huge impact on my music, workflow, and life in general.
I built up a fair amount of studio gear in the UK but sold it all and moved here with just my laptop. It was refreshing to start again and make music with a basic setup. Over the last couple of years, I’ve gradually added new bits of equipment to my setup. Regularly mixing up my studio setup is essential to keep things fresh and interesting and has allowed me to evolve as a producer. 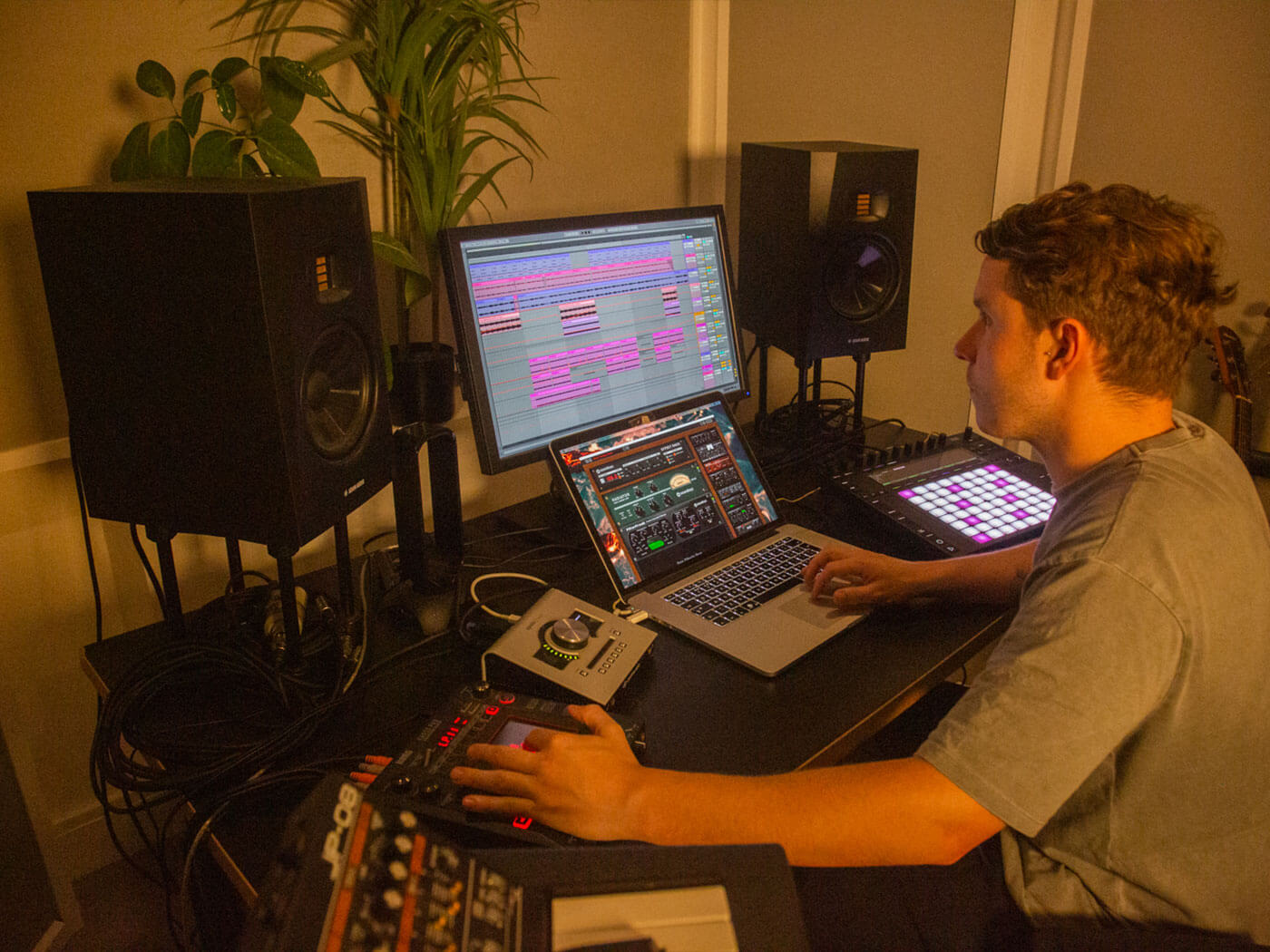 When I was in the UK, I lacked the confidence to truly push my music and achieve the best out of it. I struggled with self-promotion and had huge levels of self-doubt. People get to know you when you’re in the same place for a long time, and it can be hard to mentally break free from a specific version of yourself that they’ve gotten to know. Moving here was a fresh start; no one knew me. It gave me a new lease of confidence about who I am and what I am doing. The scene in Melbourne is creative, open and positive, so just living here allowed me to find a new rhythm with my creativity.

Until four months ago, I had my studio setup at home. But recently, I made the step to hiring a studio space. With COVID-19 and the ongoing lockdowns, I needed somewhere outside of my home where I could go to create some separation between home life and music. I found an awesome studio complex called Fallback Studios here in Melbourne, and I rent a room out there. It’s a 15-minute cycle from my in Ascot Vale, so it lets me start the day with some fresh air before going into music mode. It’s also great to be in an environment with other producers, as producing at home can be a very solo existence at times. 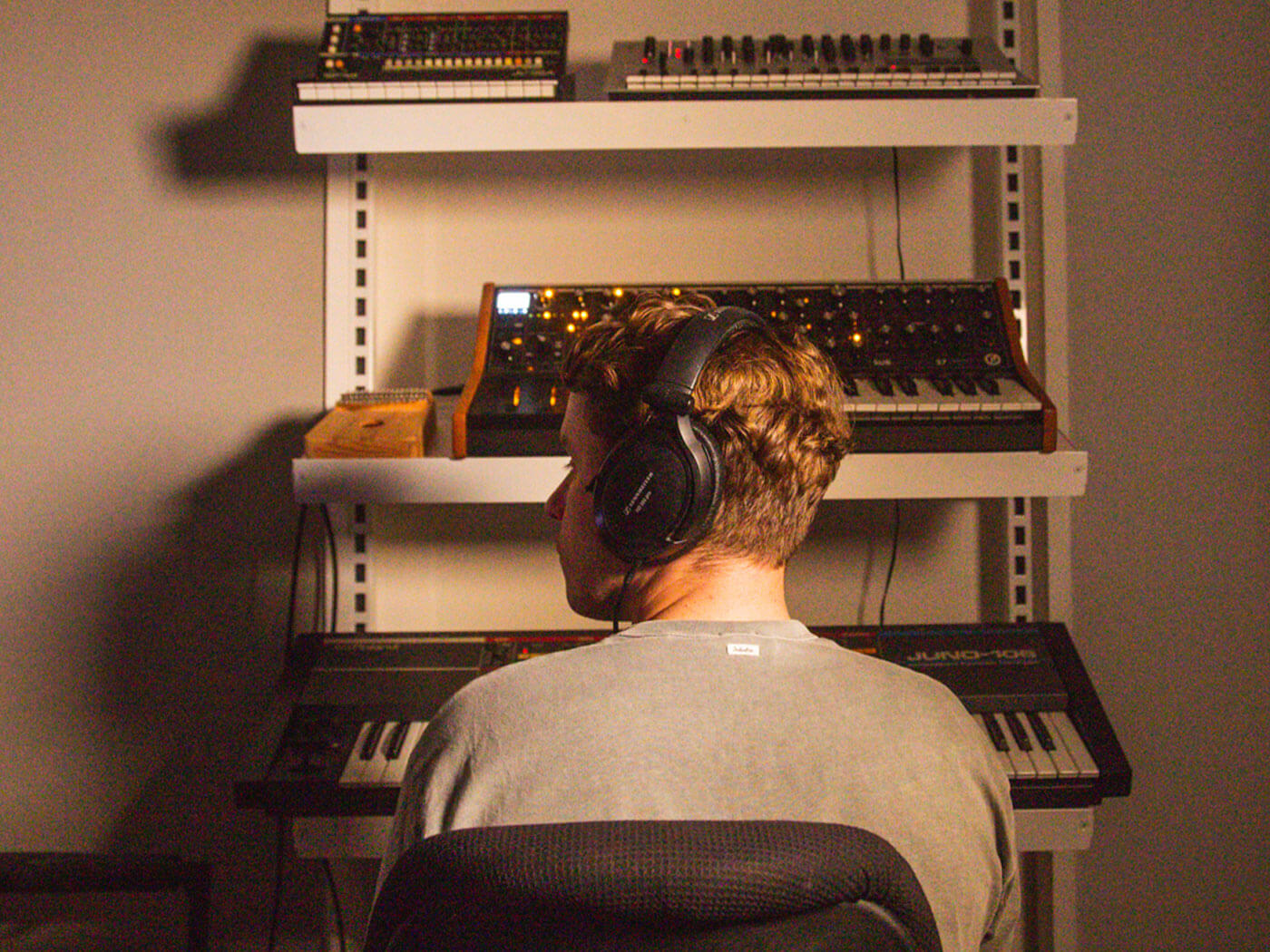 I do most of my work in the studio. Occasionally, I’ll demo ideas at home on my laptop if an idea pops into my head. The only other sounds that make it in my music that aren’t recorded in the studio are from my field recorder, which I often carry around with me to collect ambiences and everyday sounds.

What atmosphere do you try to create in the studio, and how does the studio environment help your creativity?

I keep a relaxing and fun atmosphere when I enter the studio. A new approach I’ve taken is to try to write something new every day I’m in the studio, even if it’s just a simple loop. Nine times out of ten, the idea won’t see the light of day, but the process of creating something new energises my creativity. The more ideas I create, the more scope I have to find sounds and ideas that resonate with me. 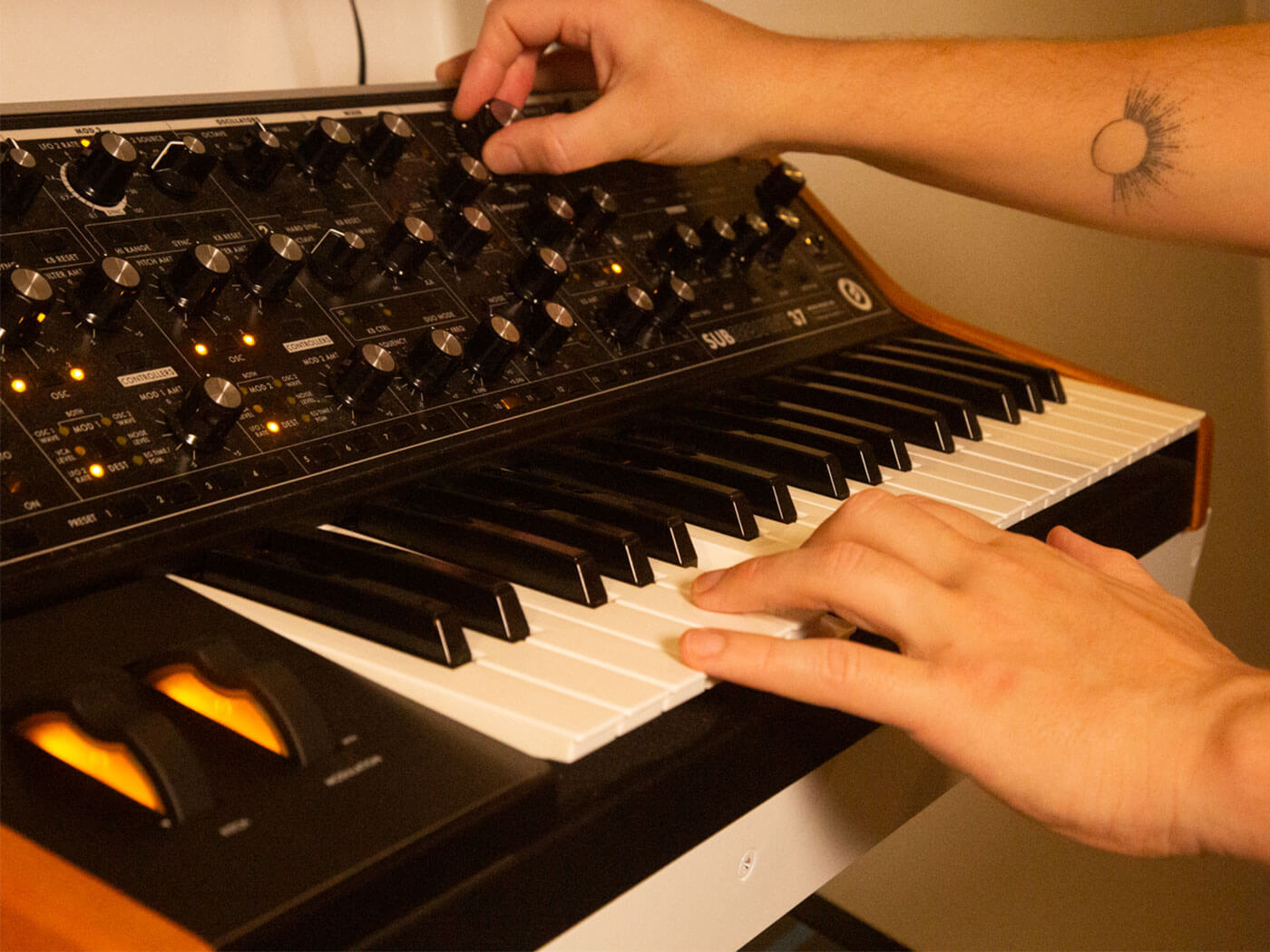 I’m loving the Roland Juno 106 – I’m borrowing it from the studio owner. I own a JU-06A, which is also great, but there’s something about sitting and playing the original Juno 106 that is really inspiring. There’s a certain edge and warmth to the sound that vintage synths provide. I also love running this and my other synths through my Echo Fix EF-X2 tape delay unit, which adds huge ambient depth to the sounds. 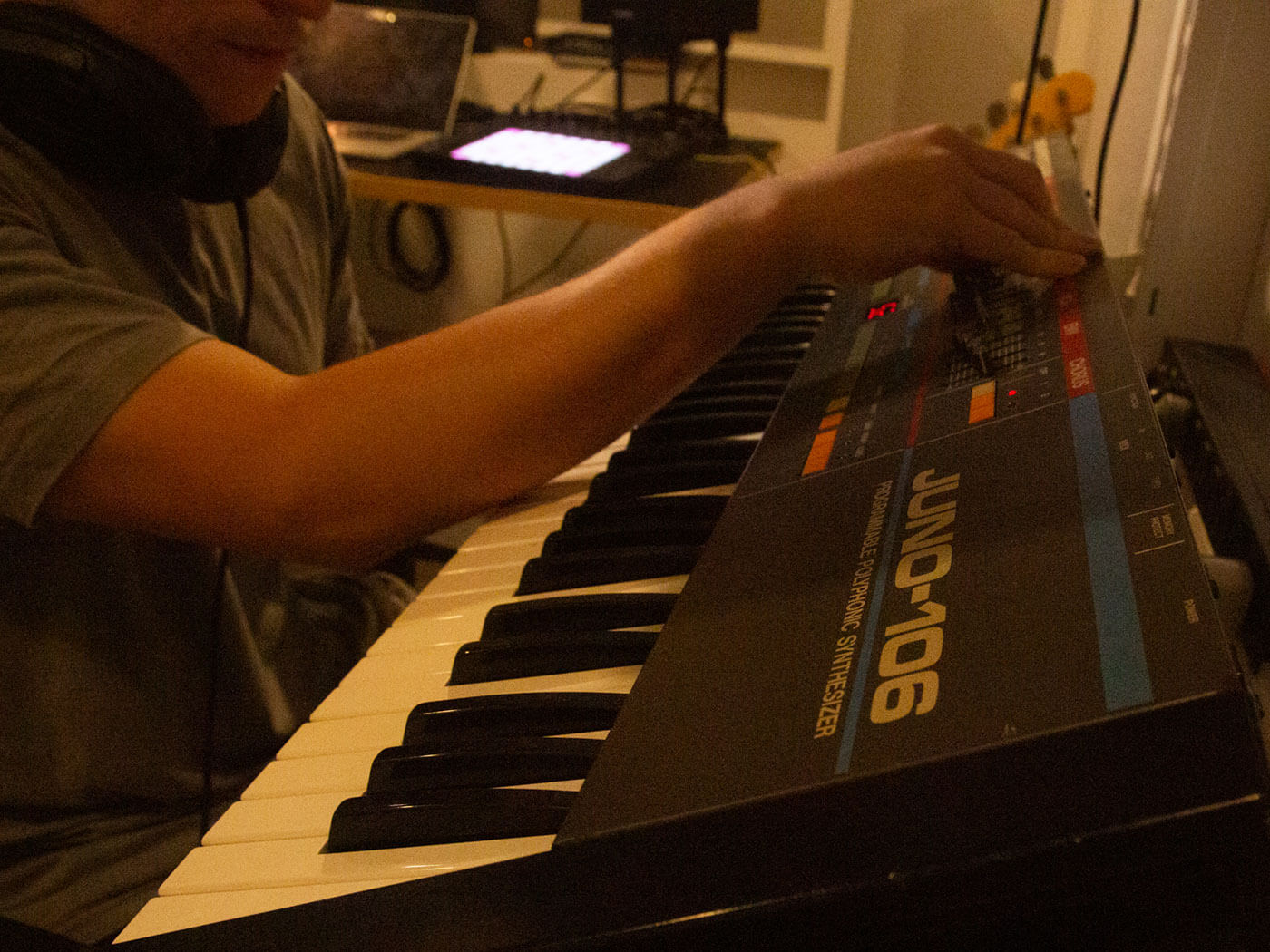 What synth or effect can be heard the most on Blue Spring?

You can hear the Korg Minilogue and the JU-06A in equal measure on the record.
These were the only two lead synths I owned at the time of the writing process. I created a few different patches on both synths and ended up using them quite a few times throughout the record, which gave it some continuity while allowing me to tweak some elements where necessary. 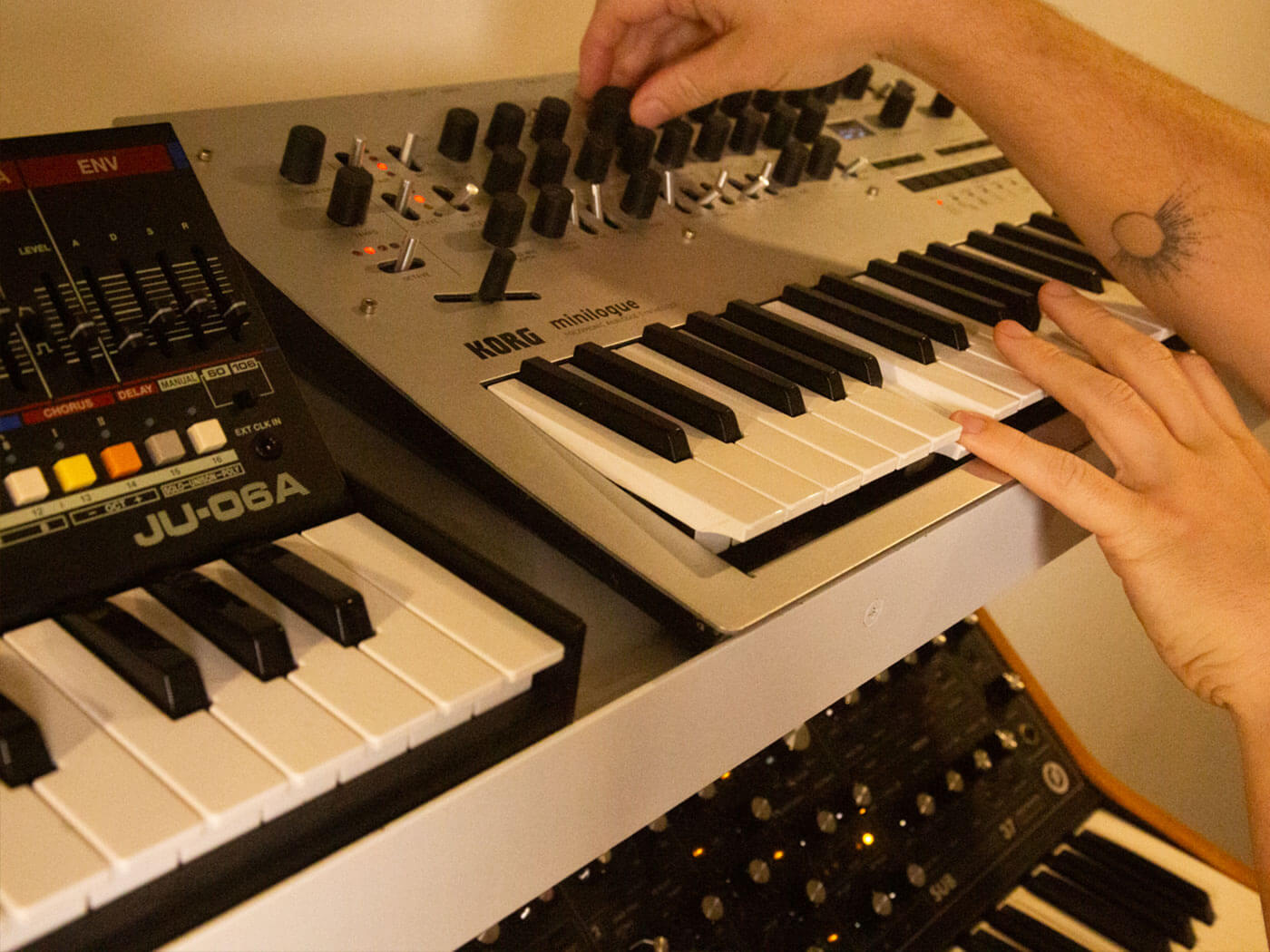 You’re also a visual artist – how does this feed into your process, particularly in your albums?

When I’m making music, certain colours and visual ideas pop into my head quite early on. Imagining the visuals gets me inspired and helps me understand where I’m taking the track. I love creating the designs and visuals for my releases just as much as making the music. I think both aspects are equally as important and can enhance the overall experience for your listeners massively. I actually already have an album name and design ideas for my next album, which is helping me connect the dots with the types of tracks, sounds and ideas I want to include on the record.

How does an idea generally develop for you?

I normally start with layering a few melodic elements, either using a synth or guitar to create something which evokes a certain mood and feeling. Recently I’m finding that recording longer improvised sections of audio can help produce some interesting and inspiring results. I’ll then perhaps cut certain smaller loops from these sections, resampling them and building ideas from there. I love embracing happy accidents and unusual artefacts in sounds, as I find they can inspire me to go deeper in the writing process. 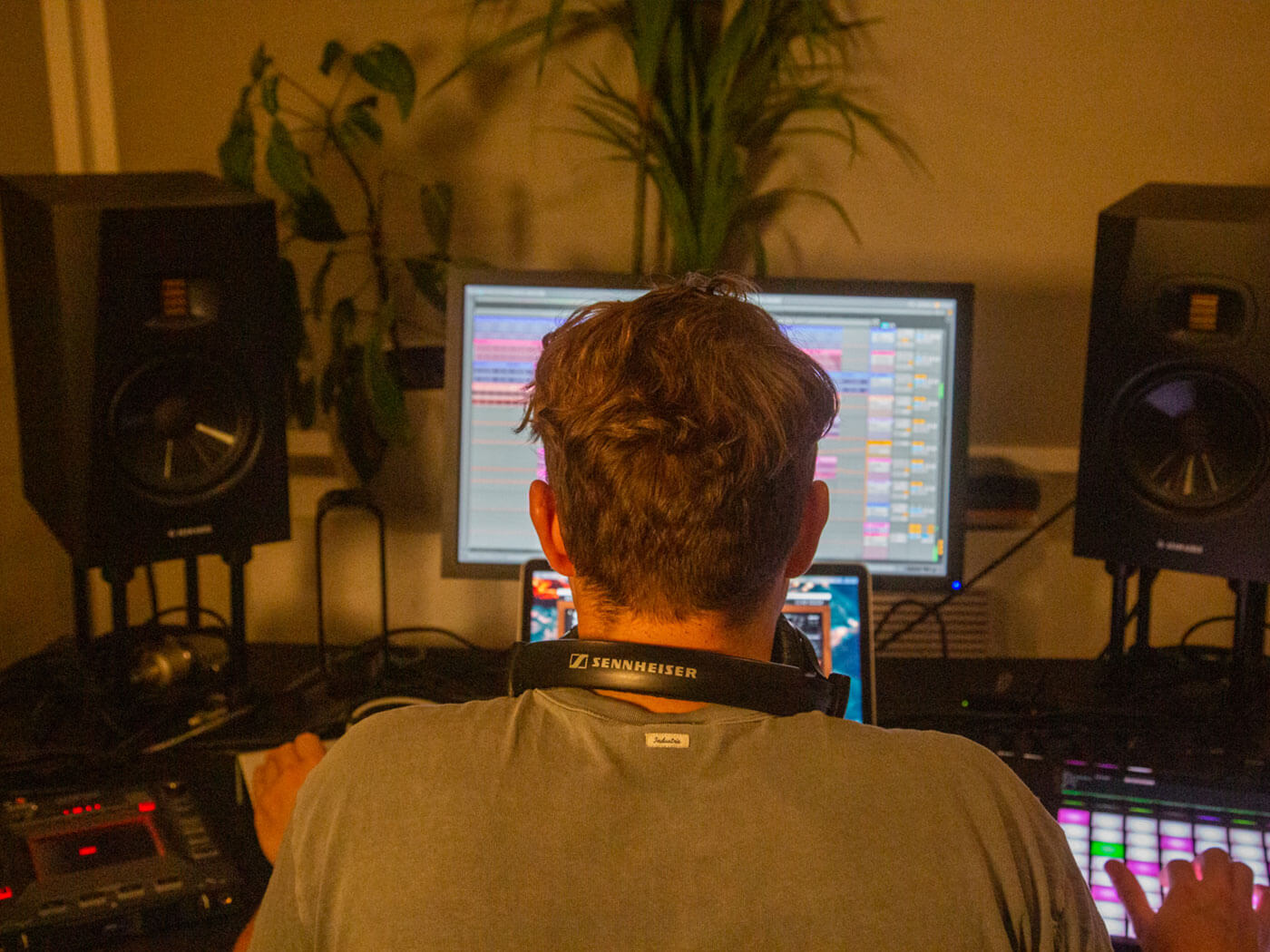 One of the hardest parts of producing for me is knowing which ideas to develop and refine further. I usually like to develop an idea for a few hours, bounce a rough clip of it, and revisit it alongside other ideas I’ve made over a few weeks or months. If a certain idea still resonates with me after a longer period of time, then it’s usually a sign that I should dive deeper with it and finish it.

It would be my Echo Fix Tape Delay unit that I bought recently. I’ve always wanted a tape delay, and I’d had my eye on one of these units for quite a while. It’s been worth it so far. I’ve been running my synths and guitars through it, and it provides another layer of inspiration within the creative process. 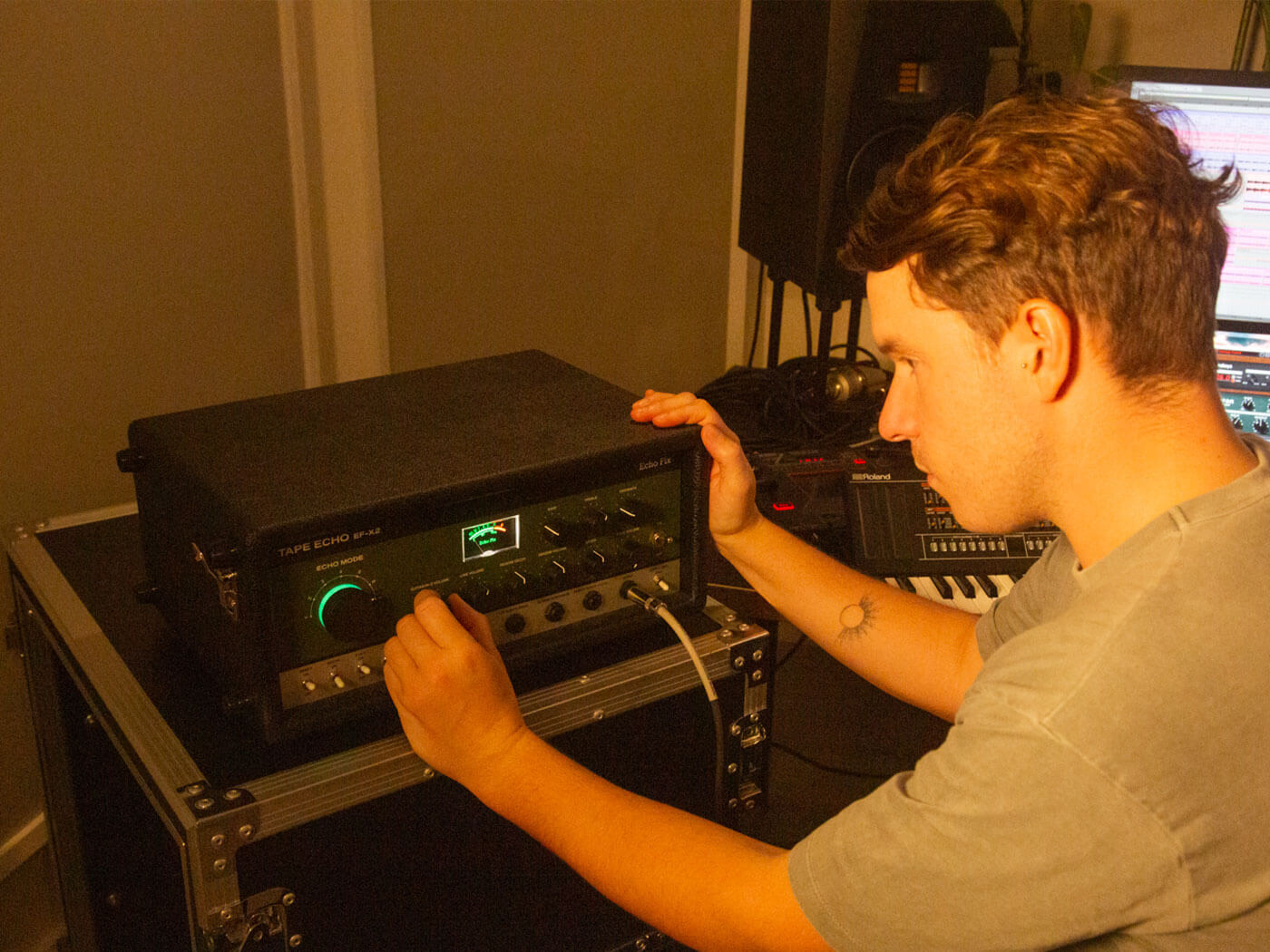 I’ve recently been eyeing up a Dave Smith Prophet; I’m not sure exactly which version yet. I used to own one before I moved to Australia but sold it when I moved here. They have a distinct sound, and I’ve recently been working on tracks with a VST version of the Prophet, and in the back of my mind, I’ve been thinking it’d be great to run those synth parts through the real thing.

A Teenage Engineering OP-1 would be great on a desert island. It seems like a pretty versatile instrument. 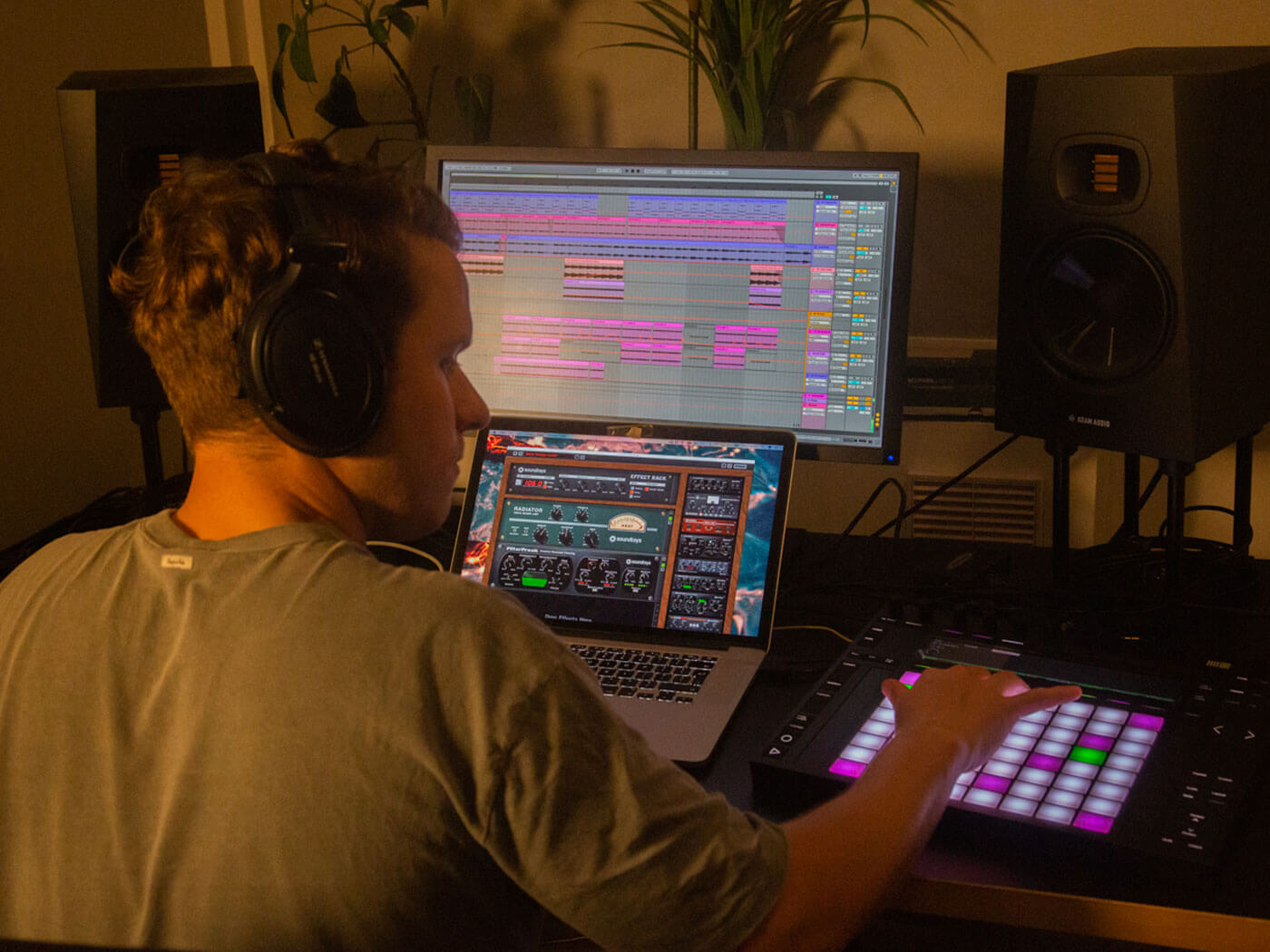 Pick your palette of sounds carefully, so they sit together in harmony and fill the frequency range in a clean, concise way. Try to avoid having sounds competing for the same space. Making good sound selections can aid the overall production process and make a track gel together. If you have to make loads of corrections on some sounds to make them sit in the mix, they usually shouldn’t be there, and things sound better without it.

Which artists are inspiring you right now?

I’m enjoying German duo TWO LANES. They have a beautiful sound, and their production is top-notch. Also, Jon Hopkins’ Music for Psychedelic Therapy, and a producer called AK based in Germany who has been releasing a lot of great music lately.

Start with a few essential bits of equipment, then experiment and learn your way around them before trying to bulk out your studio. Sometimes, less is more! 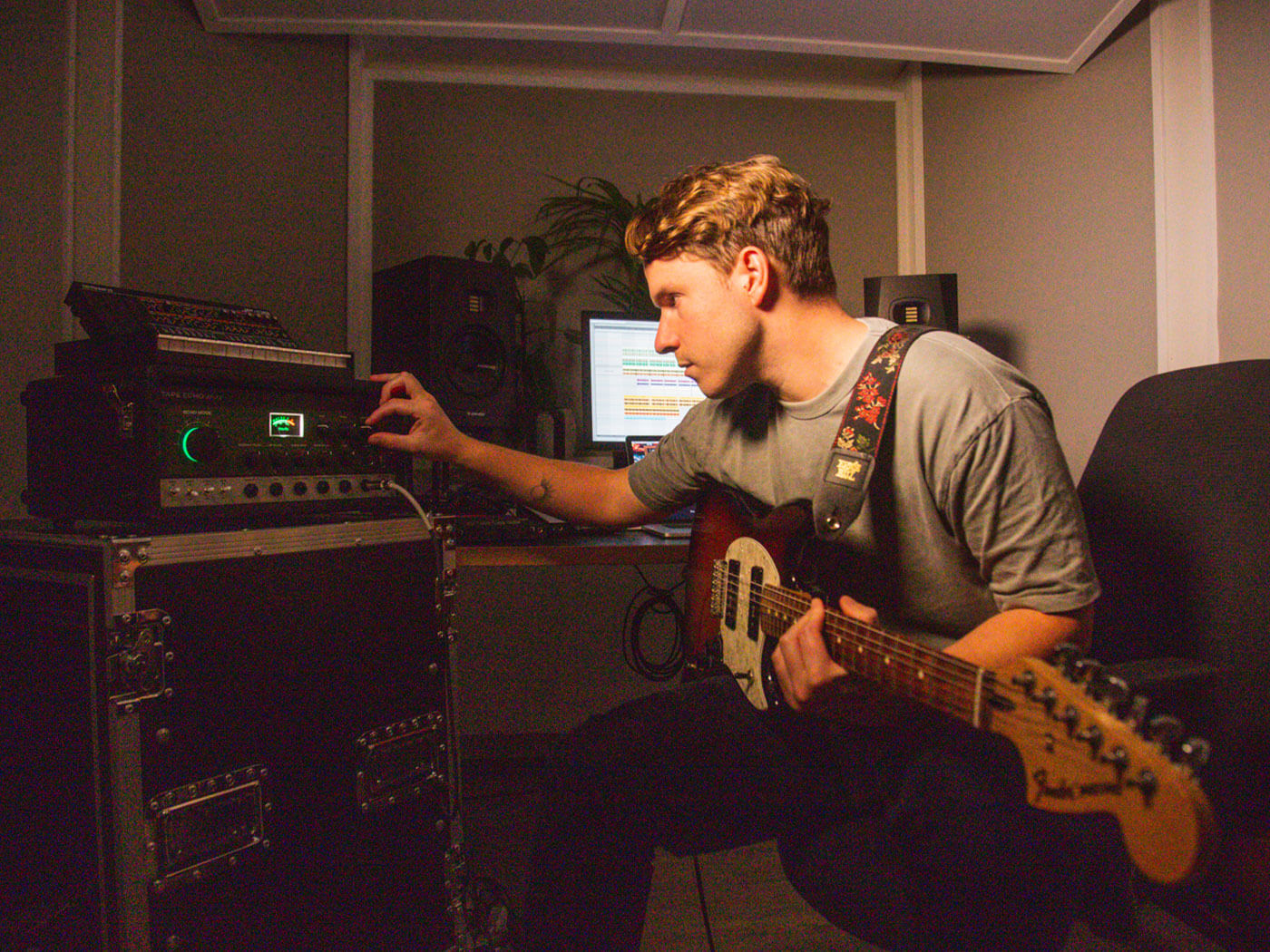