Following the rerelease of his seminal debut, A Raver’s Diary, Dusty Kid invites us into his home studio and shares the story behind his gear. 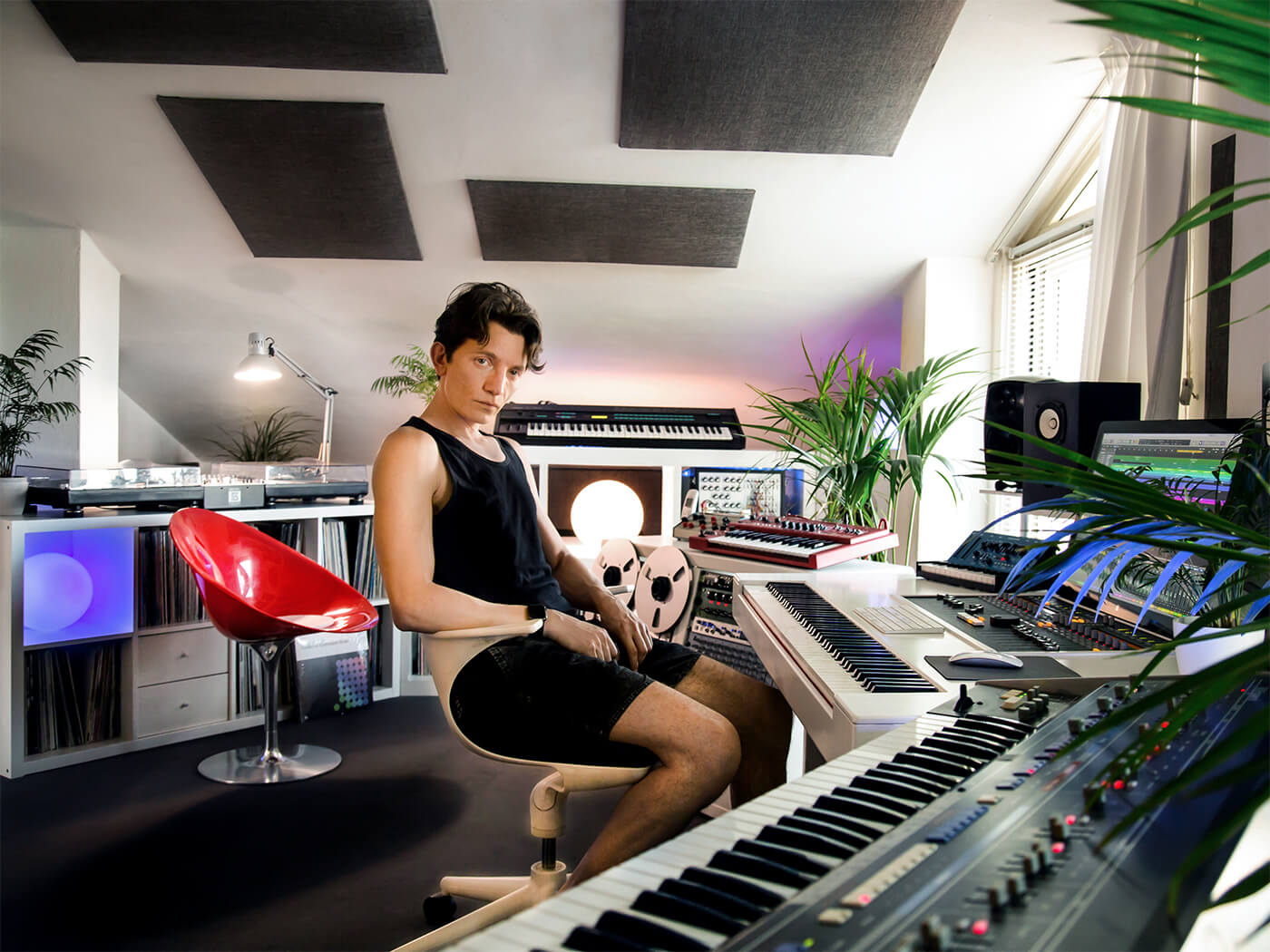 Hey Dusty Kid! Let’s start with some info on your re-release – what inspired you to reissue A Raver’s Diary and what did you add or change to make it accessible for listeners in 2020?

As A Raver’s Diary was released 10 years ago, we decided with the label that it would be a nice idea to re-release it on vinyl for the first time, adding some extra content. A lot of people over the years asked for it on vinyl so we considered it a good idea. 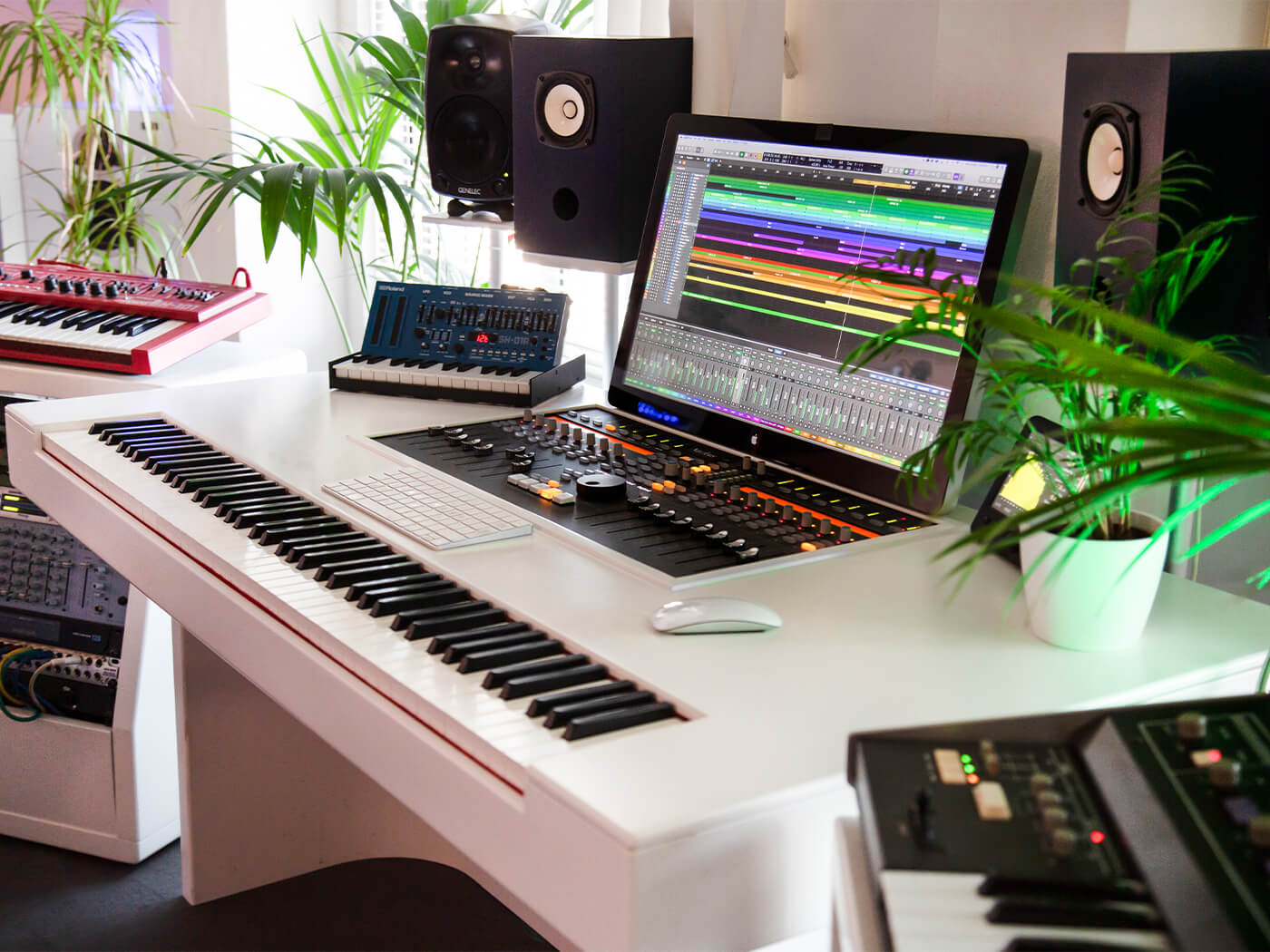 What differences did you notice in your productions when listening back and reworking the album?

Every time you work on a new track you always learn new things, and this is still happening for me nowadays. In the A Raver’s Diary era, most of my production techniques were completely wrong and unorthodox, but they were letting me obtain what I wanted sonically. For instance, at that time I wasn’t mastering my tracks because it was not needed; I was pushing all the channels so high that the master channel was clipping hard, but in a way that when the track was bounced it was sounding like it had been mastered – I was just cutting -0.1db from the file. Most of the time, this technique was leading to good results and a lot of people were wondering what I was using to make the tracks sounding that way(if they only could see the open project!). Listening back to the original masters though, I noticed a lot of bad things my ears were not trained enough to notice. This is nothing I would ever do today – the master channel never exceeds -6db of average, as it should be!

Tell us more about the studio!

My home studio is located in Cagliari, Sardinia island, and I moved to this place in 2009. I never liked the idea of separating the studio from my house as it’s very important for me to have a cosy, comfortable place to work in anytime I feel like I want to make music. I don’t like the idea of having to leave home to make music, it feels like going to work at the office. Meh! 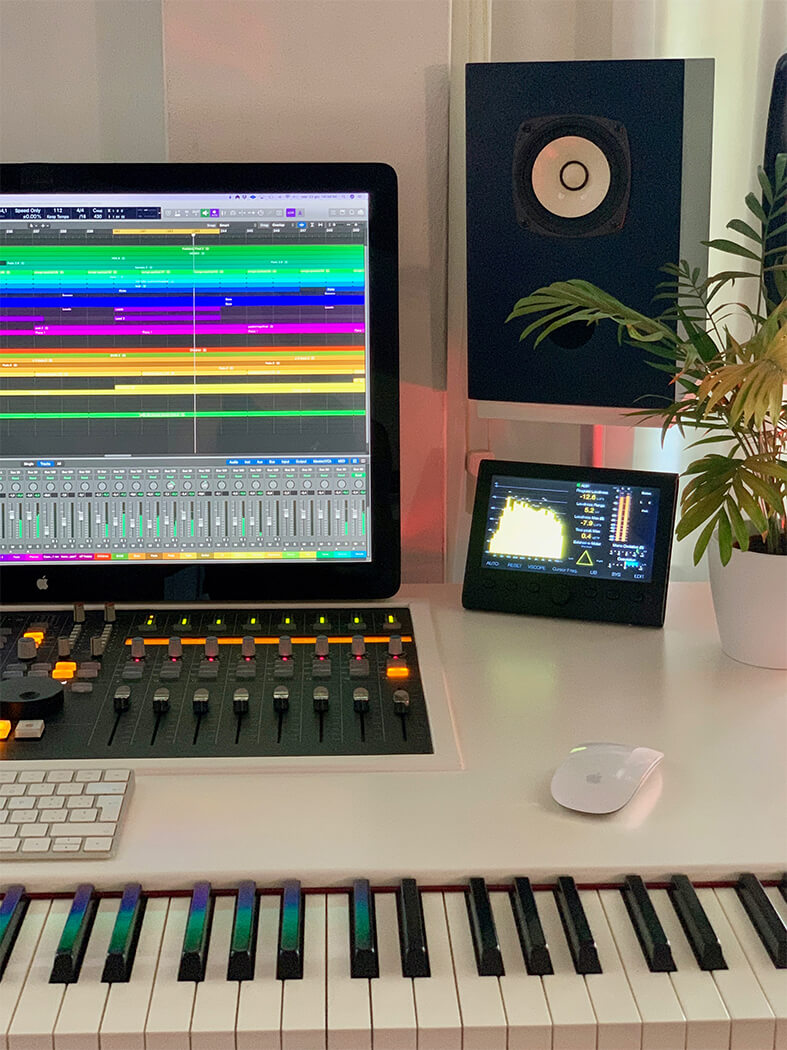 Logic Pro X. I love it. The 10.5 update made it even better. All the stock plug-ins are amazing, I can easily produce with Logic only and not feel like I need to use non-stock plug-ins most of the time. It works so well and it’s very stable. Also, as I am doing a lot of songwriting in the pop field, the integration with Garageband is good and I often make sketches on it with the iPhone or the iPad, i.e. at the beach and then I can continue working on it when I’m home.

When I bought the house, I did some renovations and the room that was supposed to be the studio got treated with lead in the walls and other stuff to make it soundproof.

An expert engineer friend of mine tested the room with special mics and stuff and decided to get rid of most of the treatments. He then made little corrections with some acoustic panels and bass traps and the room sounded incredibly good. This guy is a genius, his name is Piergiorgio and he’s worked with some famous names in the Italian music scene. He’s so talented and he taught me a lot of things from a technical side that I really don’t know what I would do today without him. 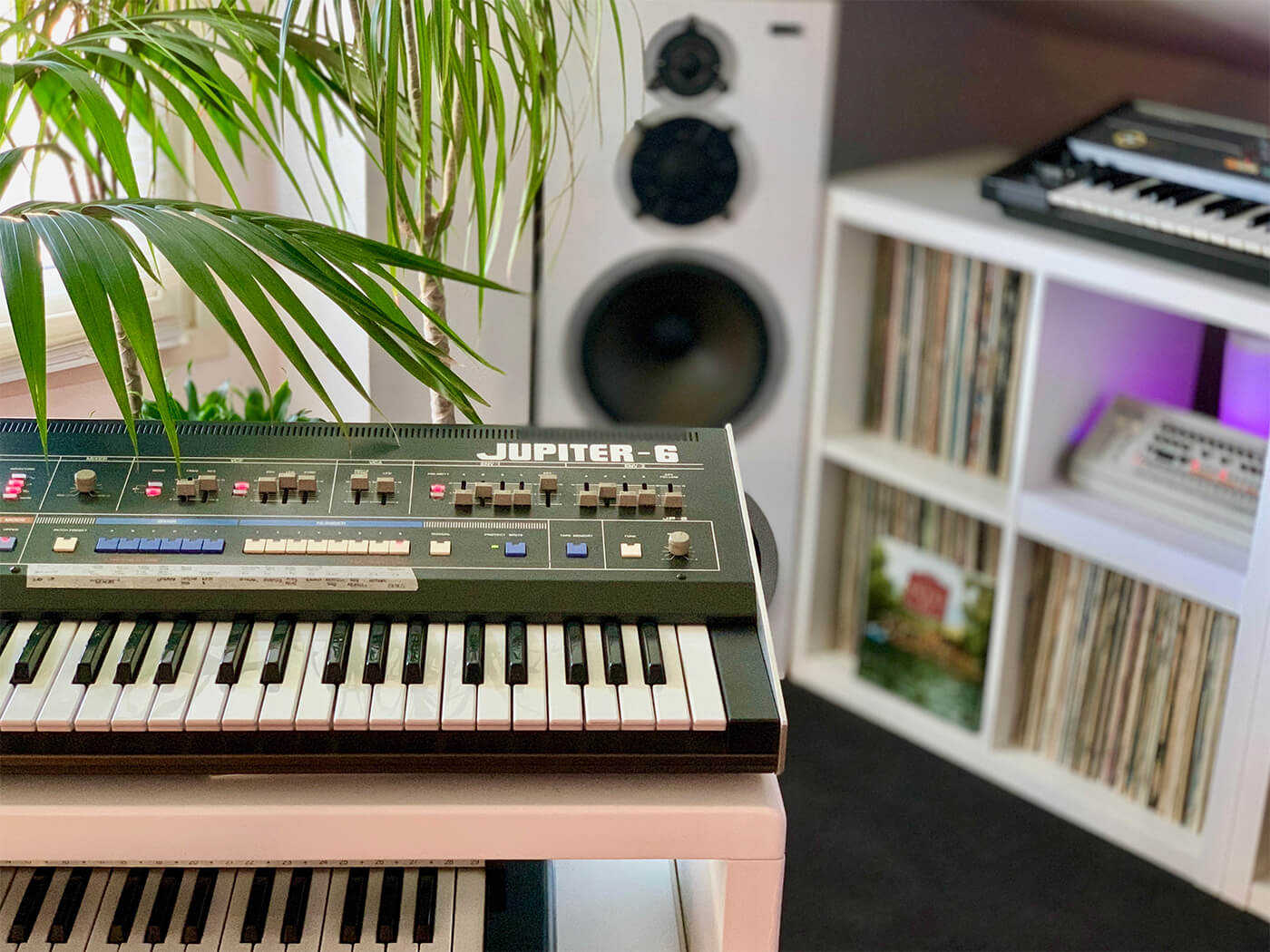 When I moved here 10 years ago I was using Genelec’s 8040 which I used to love, and I was so used to them that I thought I would never change them. Then one day the guy gave me these little speakers he built and he said: “try them, I bet you will trash your Genelecs in a week”. And so I did! They became my main speakers immediately. They don’t have a big bass response so I kept using the Genelecs just to check what was happening in the low frequencies, but the switch from A to B is always so painful when mixing. The Genelecs sounded like they had a big hole in the mids and the overall impression was muddy compared to the custom-built ones.

Then I changed the 8040 with the 1030 model and it felt a bit better, but still, I was preferring the custom build Fostex he gave me. The thing is I was still missing some bass frequencies, and my friend really wanted to make me happy. One day he came to my studio with a pair of 8030 saying “this is what you need here”. When I switched them on, I was instantly in love! Not only was the A/B comparison with the custom speakers very good, but it was also giving me back that ‘club’ feeling I was missing with those and the 1030s. I really don’t know what he did to them but these 8030s are literally the best speakers I ever heard, they sound so good, the bass is so well defined and big, the mids are full and in your face and the highs feel so clear and natural. We compared them with a lot of speakers he has (and he has many!) and I would never trade them with anything else! The other monitors are my father’s Ditton Celestion 66 that have been customized years ago to fit the studio. 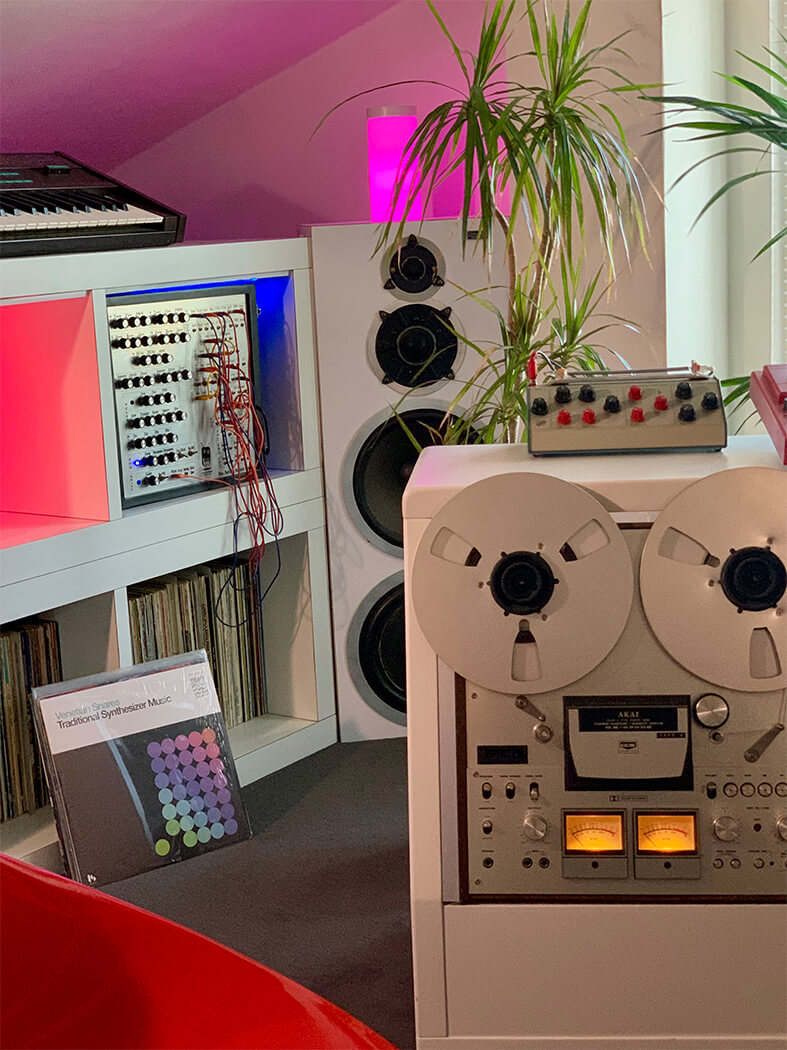 Cosy and relaxed. As I said, it’s important that it has to feel like home. But every now and then I fill it with friends and we listen to music and we party inside of it a lot. The carpet floor has been changed countless times as we destroyed it smoking and drinking but after I quit smoking the studio it became a non-smoking place, making most of my friends unhappy!

We have to ask – where did you get the sleek studio storage units? What is the keyboard embedded into the desk?

Except for the record furniture – the classic Ikea Kallax – the rest has been designed and made by Matteo Buccoli, one of my best friends and a very talented architect and interior designer. I worked with him to design everything as I had a clear idea in mind of what I needed to work ergonomically and the gear I need to have close to my seat. The piano inside the desk is a Yamaha digital piano with weighted keys, it took me a while of researching and testing until I decided to go for this model, it has a very nice touch and feel. Piergiorgio was also involved in the making, as he helped Matteo with the electronic parts of the piano and the other stuff that needed to be fitted in the desk. 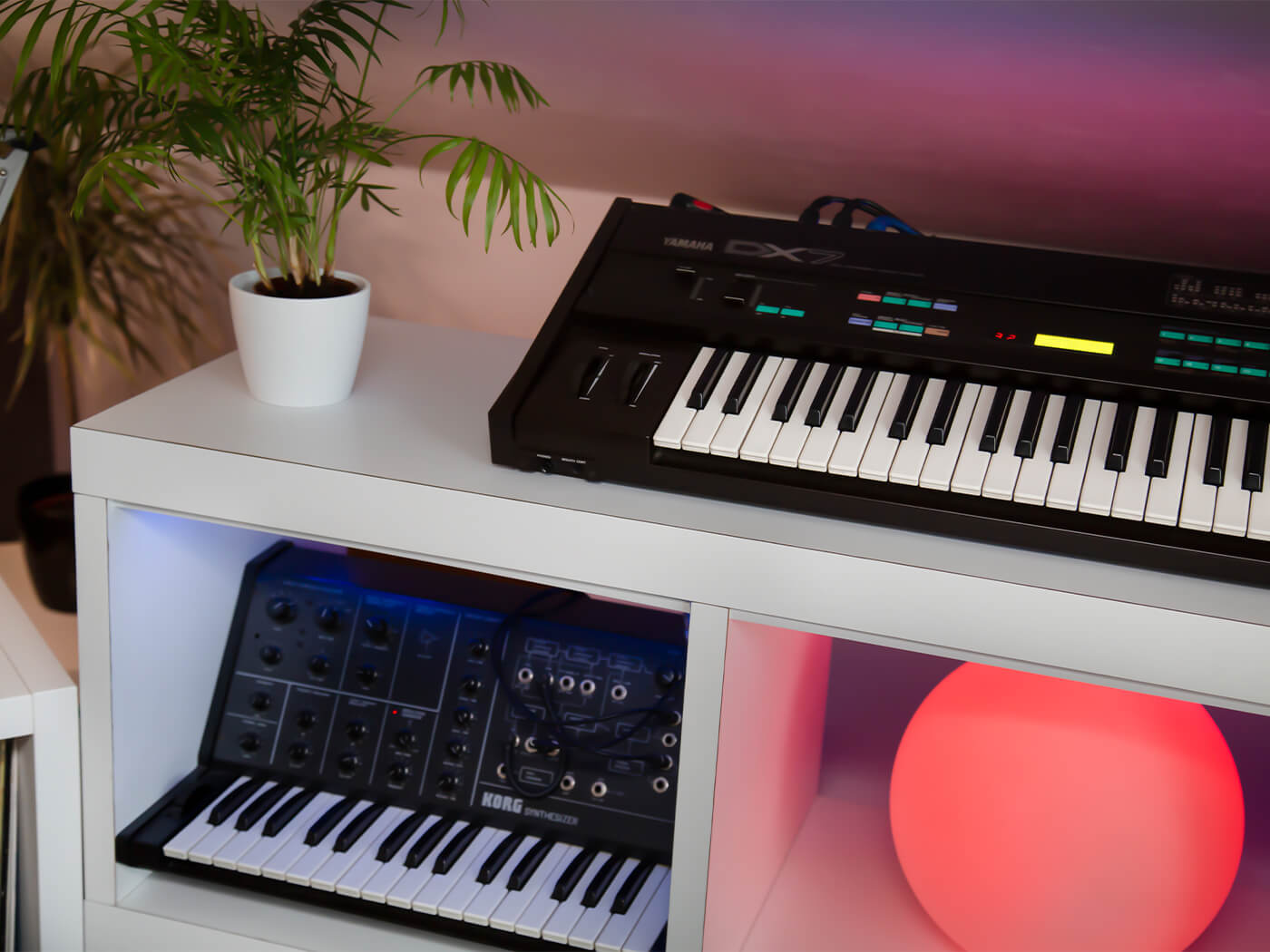 I would say the desk, as it’s the core of the studio, but it’s not a proper piece of gear, right? I love the Jupiter 6, it always been my favourite synthesizer, I had basically all the main classics, various vintage Minimoogs, Memorymoog, I had the AKS Synthi-a and even an original Arp 2600 from the 70s. I sold everything as I never felt connected with any of them. The Jupiter 6 is the perfect extension of what my brain looks after in terms of basic sounds and more. This is the second unit I bought as the first one got pretty damaged over the years, and this one is really in perfect condition, cosmetically flawless. It has the Europa upgrade and it has been modified by a technician friend who did a lot of good things to the filter, the LFOs and the oscillators, making it a true beast.

What new gear were you excited to use on the reworking of A Raver’s Diary? How did you apply them to enhance your sound?

All the new versions have been reworked mainly with Logic only and a few lines of synths here and there, but nothing compared to the original versions, those tracks were all about hardware synths, I was so addicted at that time. 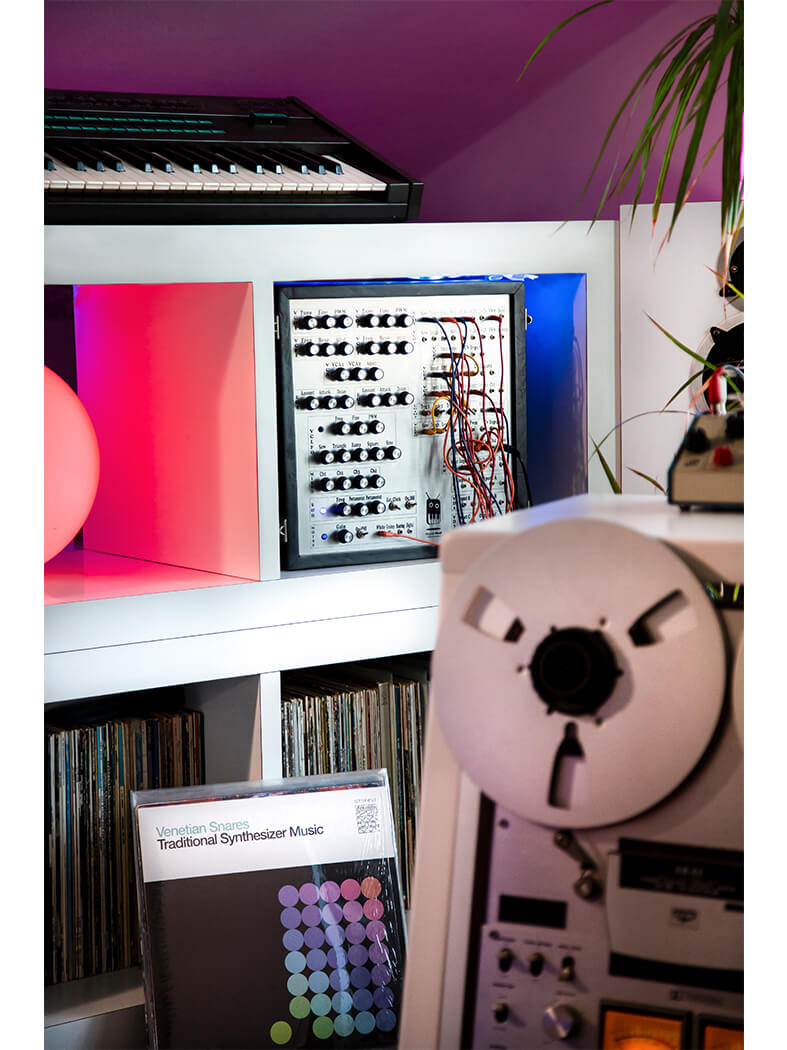 You have a tape machine in the studio – can you tell us a little bit about it?

It got used a lot during the making of III, an album from 2013. I still use it every now and then to treat synths and some ambient tracks and in conjunction with the custom green summing mixer – also build by Piergiorgio – that I use when mastering with stems.

I would like to upgrade my Mac Pro’s SSD. It’s only 512GB and I need 2TB so I can directly save everything on iCloud Drive. At the moment – and since I bought this Mac Pro in 2015 – I have all the libraries in an external Thunderbolt hard drive tower with a system of backup and RAID, but from time to time it gets disconnected from the computer and it’s not as fast as an internal SSD, even with Thunderbolt, so I definitely need to upgrade it soon. This model of Mac Pro has a peculiar connector for the internal storage units, which makes it hard to find a compatible SSD. 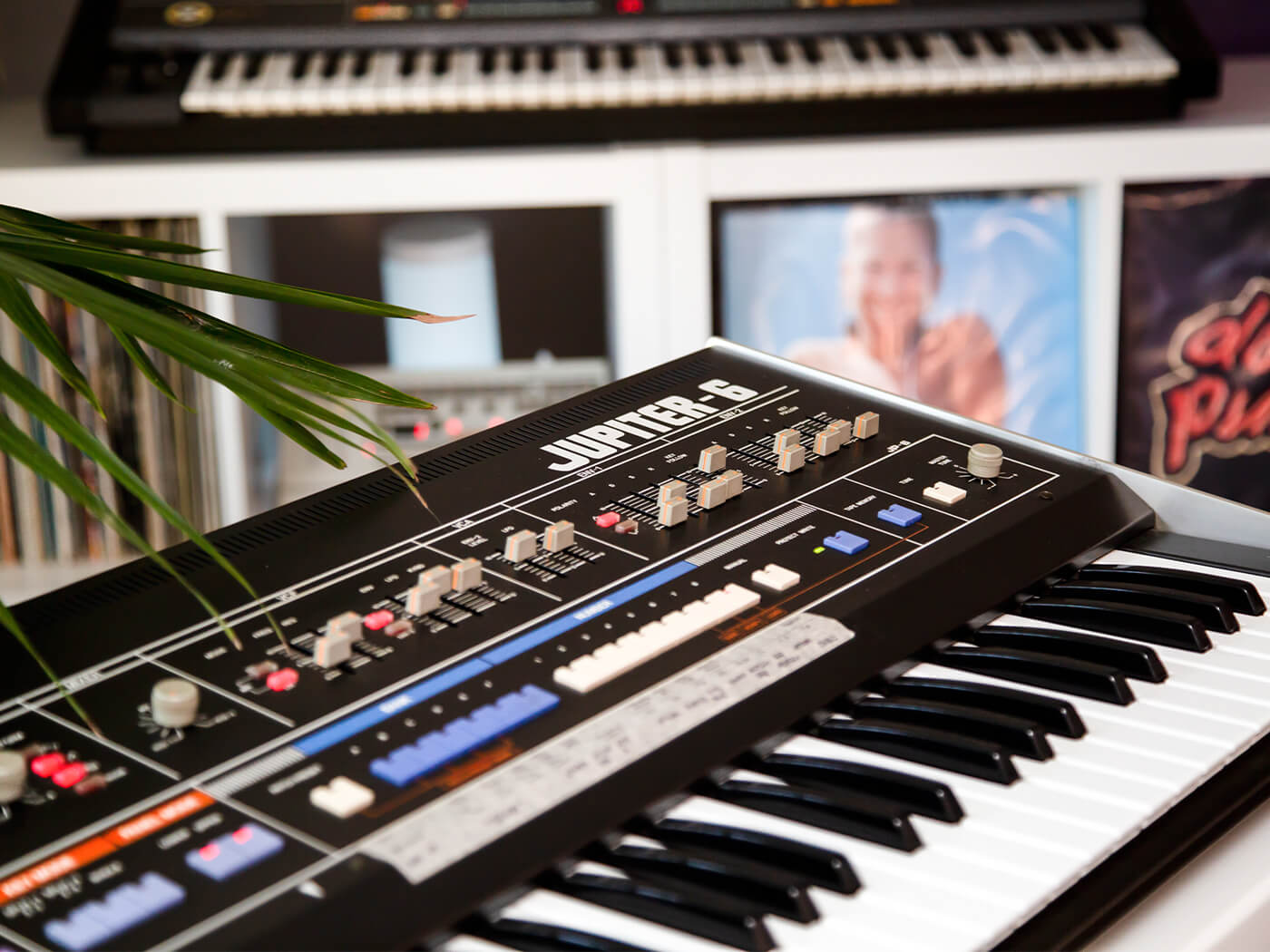 I would love to buy an Oberheim OB-8. I don’t know why, but it has something magical in its sound. It’s also a trademark of some The KLF’s tracks and that makes me feel like I need to own one!

To always work with a reference. I never did that until only recently and it improved my sound a lot.

Think of the room as an instrument with proper tuning and start building with that reference constantly in mind.

Lastly, what are you looking forward to doing when lockdown is fully lifted?

Dusty Kid’s A Raver’s Diary rework is available to purchase and stream now on all major streaming platforms.