The multi-talented artist lets us into her apartment studio, where her selective choice of gear helps her create complex and experimental tones for a number of projects. 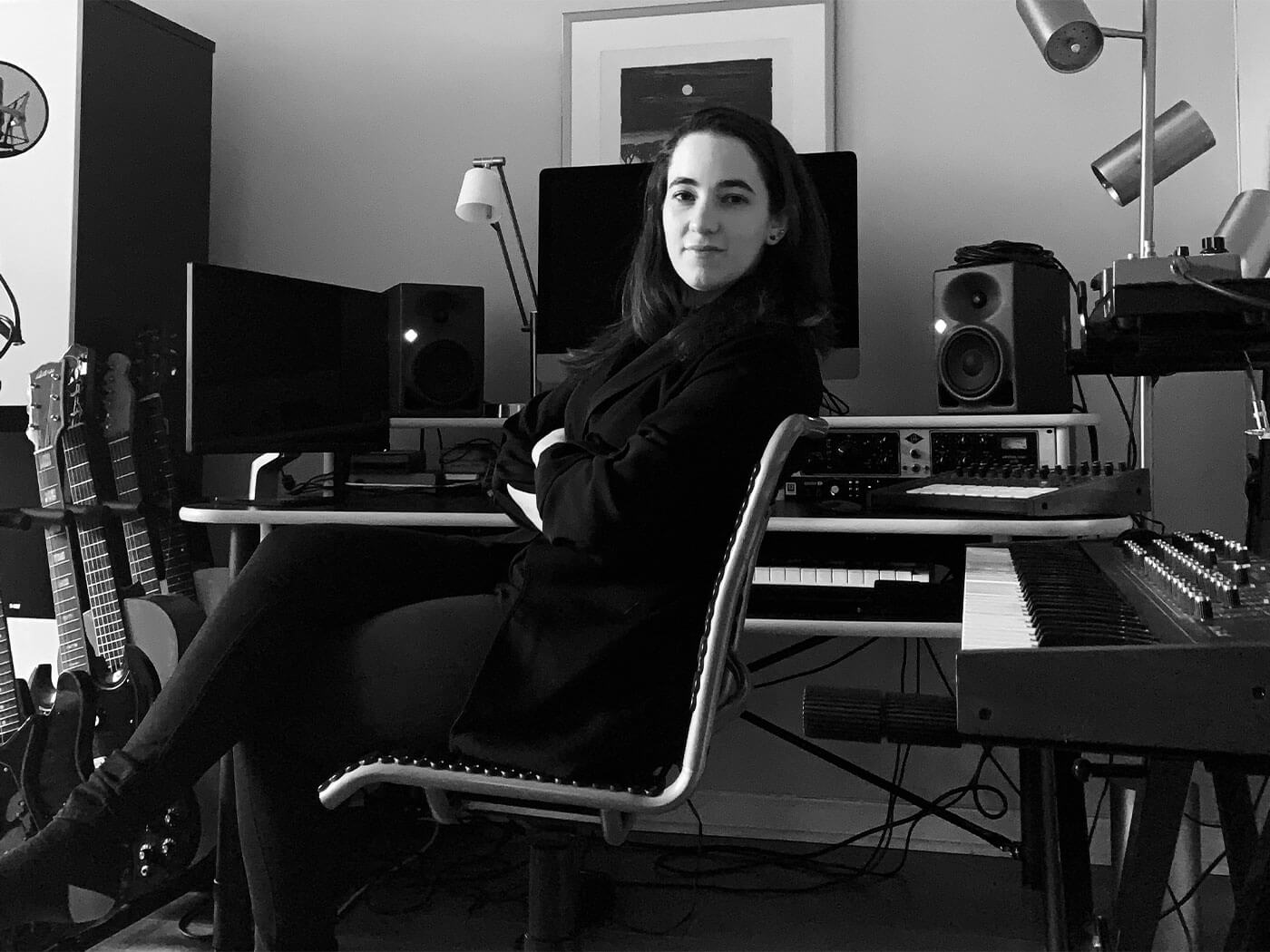 DELANILA (brain child of notable composer and producer Danielle Eva Schwob) will be launching their debut album on 1 May.

Since I consider myself a composer and songwriter before anything else, I think of it mostly as a writing room. Obviously I do some recording here as part of that – mainly vocals, some guitars, bass, keyboards and bits of percussion – as well as editing, mixing etc, but it’s very much a project studio geared towards composing. I write across a few different genres, but mostly for the concert hall, film / TV and then for an artist project I have called DELANILA.

Tell us more about the studio, Danielle!

It’s a home studio in my apartment in NYC, where I’ve been on and off since 2006. I’ve had rooms elsewhere at times but for now I like the flexibility of a live/work space. It means I can keep unusual hours if I want to and that I never have the frustration of having an idea for something but not having the tools around to realise it. Plus when you’re on a crazy deadline there’s something nice about being in your own home and not wasting time on a commute. Beyond that, the idea was simply that I wanted to have an inspiring place to write where I didn’t have too much stuff but everything I did have sounded great, and my workflow felt frictionless.

I write in Logic, though further down the road on larger projects I’ll often end up working in Pro Tools for editing (which admittedly it’s better for) after I’ve tracked players elsewhere. Logic is simply just an unbelievably great tool for writers – it’s intuitive, you don’t have to spend as much time telling it what to do and where to send everything as Pro Tools (though some might say that’s also its downfall), it integrates perfectly with video. It’s basically made with us in mind.

I also work with Ableton Live for live shows, as well as with Sibelius 7 run via ReWire into Logic. Even though those sounds never end up in a final production since they’re not as good as what you can load in directly to your DAW, I find Logic’s notation capabilities to be lacking. As someone who has a background in classical composition and is used to writing directly into the score in a compulsively detailed way from the get go, ReWire has been a good workaround for me. I can see how things line up with other production elements and keep that level of meticulousness in my score before I replace parts with live players later. Plus it saves me time exporting/importing MIDI to make parts before a session.

I live here too, so basically 24 hours a day, 7 days a week. Though actual working time I try to keep to roughly standard business hours. 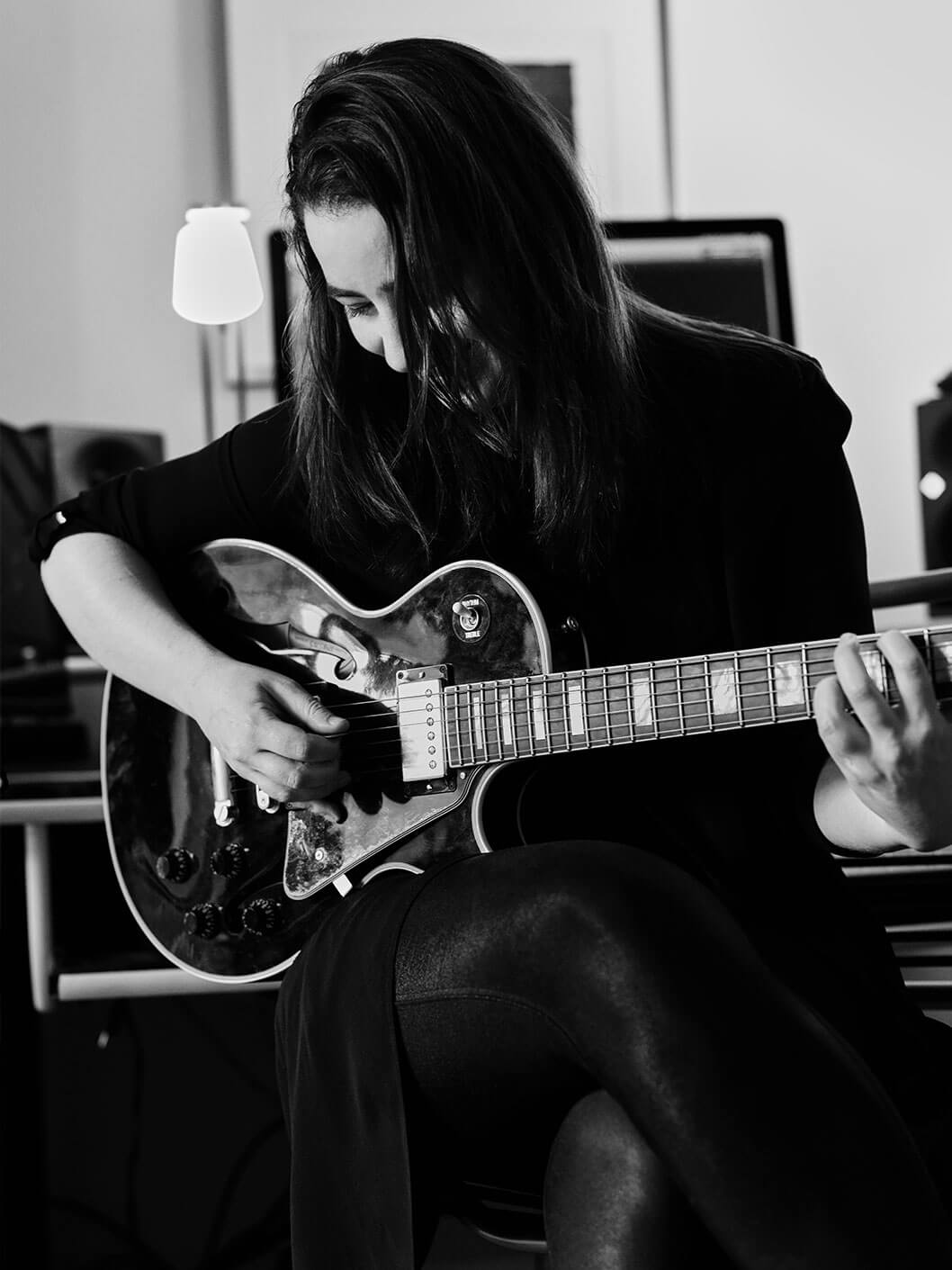 It’s really just been picking individual pieces of gear that I knew sounded good, doing a lot of research, asking around, working in other studios and building the space slowly and steadily. Sound treatments I still need to figure out. Because of the way this room is laid out, it’s been tough to place them, plus I keep thinking I’m going to move and not getting around to it.

I wear a lot of black and white and my workspace has subconsciously wound up being an extension of that. It’s minimal because I honestly just don’t believe that you need to have rooms and rooms of gear to make great music. So much of that battle comes down to having a killer composition – melody, harmony and rhythm – and really knowing how to get the most out of whatever gear you do have. I’m certain that there will be many more toys in my future, but equally I’m not in a hurry because I know that there’s no limit to the number of records I could make with just a Prophet and a Tempest.

Since I’ve been a guitar player since I was a kid I should probably say my guitars, but really it’s my Prophet. I love how detailed you can get with the programming and routing for each parameter in a sequence, the editing capabilities for sounds themselves are endless and it’s honestly just impossible to make it sound bad. Everything I add it to instantly elevates the production and gives it focus, depth and clarity, and it always ends up being the element in the track that I try to get everything else to measure up to. It also sounds great when run through different guitar pedals – current favourites are my Earthquaker Bit Commander and Pitch Bay.

Can you tell us about the various pedals you’ve collected?

Sure. They do lots of different things, though I seem to have accumulated quite a few that mess with pitch in some way – my POG, obviously a Digitech Whammy, and a Pitch Bay and a Bit Commander from Earthquaker, the latter of which basically turns your guitar into a mono synth that sounds like a dying computer and can be layered in octaves. Then I have other less crazy sounding favourites like my Analogman Bi-Compressor, which does what it sounds like it does and is pretty much an automatic ‘now you don’t suck’ box. They get used mostly for guitars though I’ve definitely started running synths through them as well. Sometimes just to make sounds for standard keyboard or e-drum parts, but increasingly to be used as ‘source audio’ to find cool, messed up textures that I can sample and cut up later to work into an arrangement.

Sound treatments. Because I just need to do it.

The desk I have is made for someone taller than me and the controller shelf is a little deep. Also the aforementioned issue of wishing that Logic and Sibelius were either better integrated, or that Logic’s notation capabilities were more powerful. Writing directly into a score makes you think very differently about what you’re composing and, for me at least, it’d be great to have a way of fusing these two approaches that felt less jerry-rigged.

A vintage Oberheim OB-X and a U47. Singing into those U47 mics makes you perform differently because they’re so sensitive and responsive. Obviously there are plenty of great vocal mics, but with those you hear instantly where the money goes. They’re instruments in themselves. Then the OB-X because it’s got such a deep, dark, enveloping sound and is a good complement to my Prophet 8, which is comparatively bright and modern. I used one on an EP I did years ago and it was what turned me on to synths. It somehow manages to sound huge yet incredibly detailed at the same time. 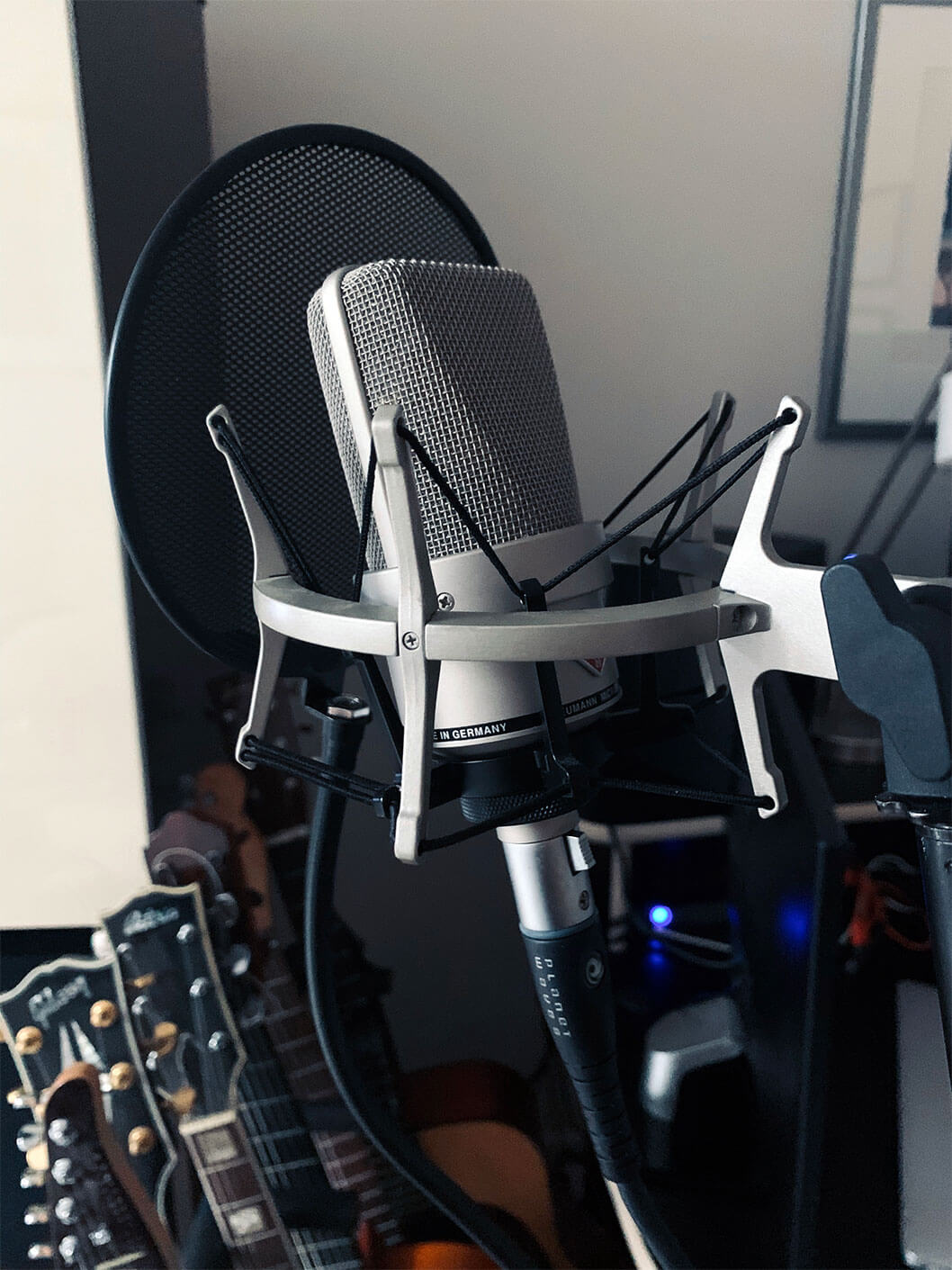 Be judicious with how you use soft synths. Many of them sound great and they’re certainly powerful writing tools, but equally a lot require considerable work to get them to sound good. If you’re making EDM or something ambient that’s obviously a different story, but in my own work, I sometimes find them problematic further down the line because a lot of them sound so huge that they require a lot of wrangling to sit well in a complex arrangement or mix. Beyond that, production is a bit like building a house of cards. The foundation (ie. the song) has to be solid before you start stacking performances, sonic elements etc. on top of it and attention should be paid to detail at every step before you add more cards.

Be selective and methodical and get one piece of great gear at a time rather than cutting corners. When I say great I don’t necessarily mean expensive (though a lot of the time you get what you pay for), I just mean something that simply sounds good. Develop your ears so that you can tell the difference. And get things that make sounds that inspire you. 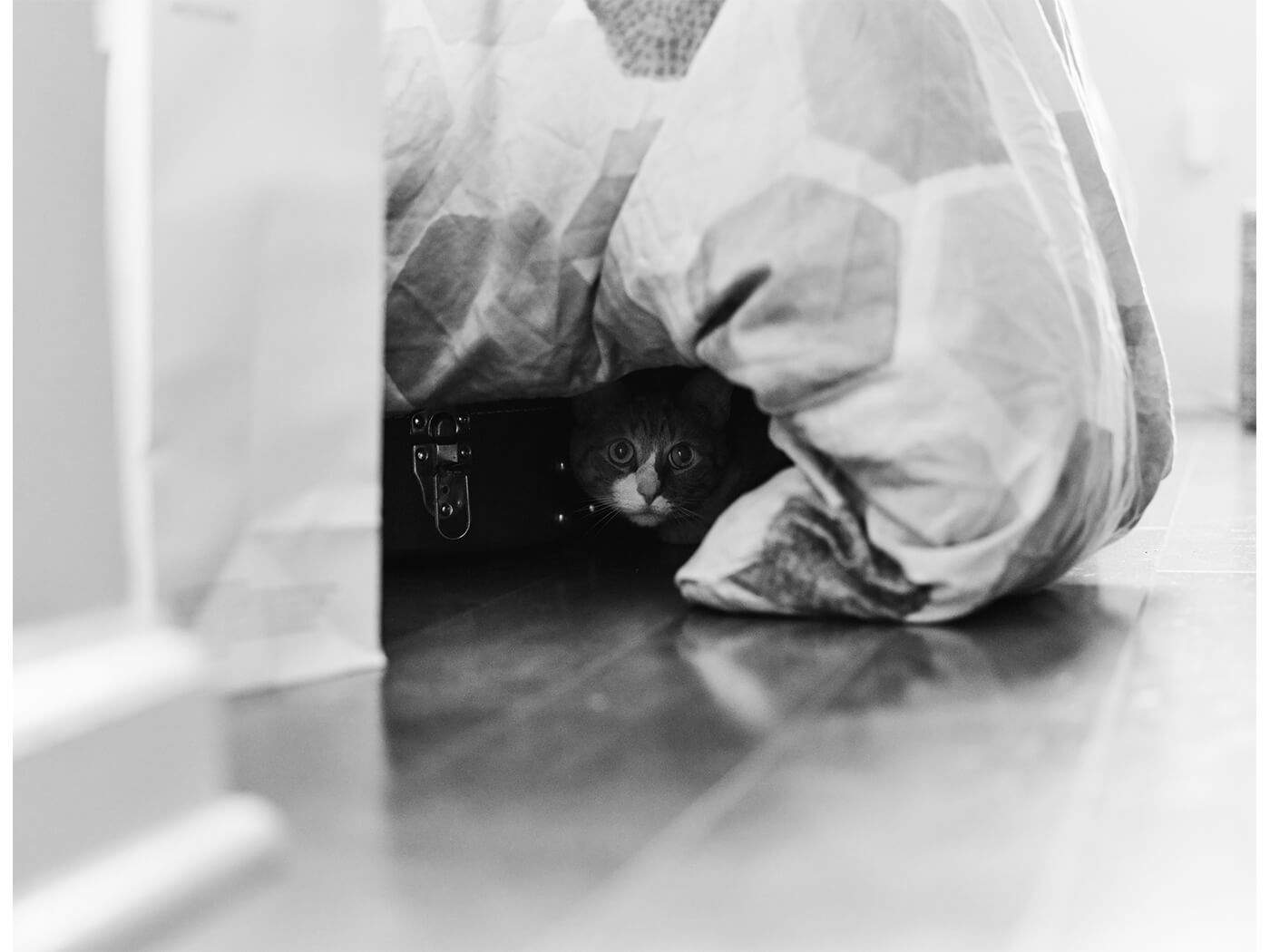