Jeremy Wilson was lucky enough to move to a new home that had plenty of space for a home studio, and it’s quite an achievement… Interviewee Jeremy Wilson Position at studio Owner Contact Jeremy@antifragileer.com Tell us a little about the studio… The studio is in the United States at Phoenix, Arizona. I just recently moved […]

Jeremy Wilson was lucky enough to move to a new home that had plenty of space for a home studio, and it’s quite an achievement… 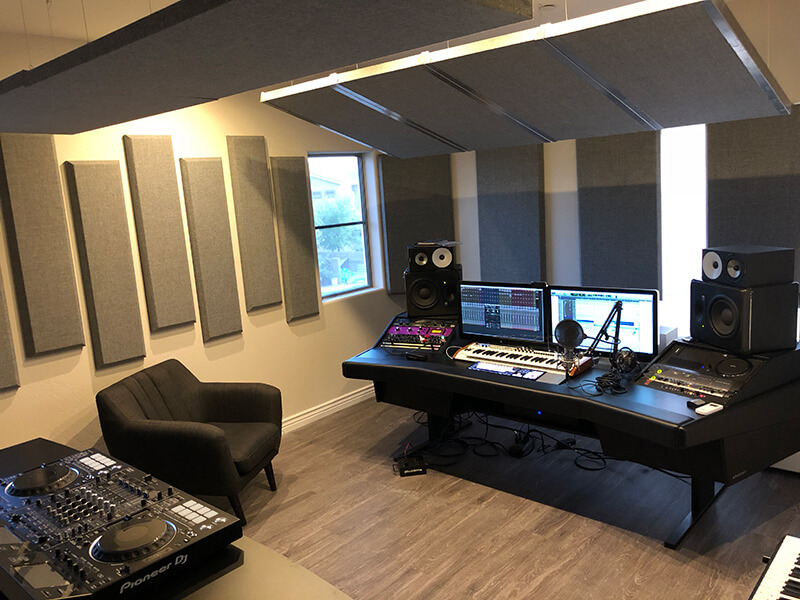 The studio is in the United States at Phoenix, Arizona. I just recently moved into a new home back in March, and had the opportunity to set up a new studio with all the extra space I had to work with. I didn’t buy too much new equipment at the new studio, but I did make a couple of additions to help control the sound and some additional rack cabinets since I had the room.

My new home is 4,300 square feet and the studio is about 200 square feet. So, I had a ton of space to work with. Also, with the extra space, I had a lot of acoustic problems and ambient noise in the room that I had to control.

It took me three months to get the studio setup the way I wanted to, working on it in the evenings and weekends. But the final product sounds amazing and I have a ton of clarity in the room.

I have a bunch of outboard gear, but I would have to say that my main components are my analog mix chain. I use it with every session I work in, at every moment I am producing. My IO interfaces are Avid; with an 8×8 Avid analog HD Omni and a 16×16 Avid HD analog interface.

I run 8 busses for 16 channels out of my DAW through my 16×16 HD and analog sum them using a custom summing setup provided by ProAudioLa.com into my Thermionic Culture Rooster 2 pre-amp and then through a Manley signal chain. 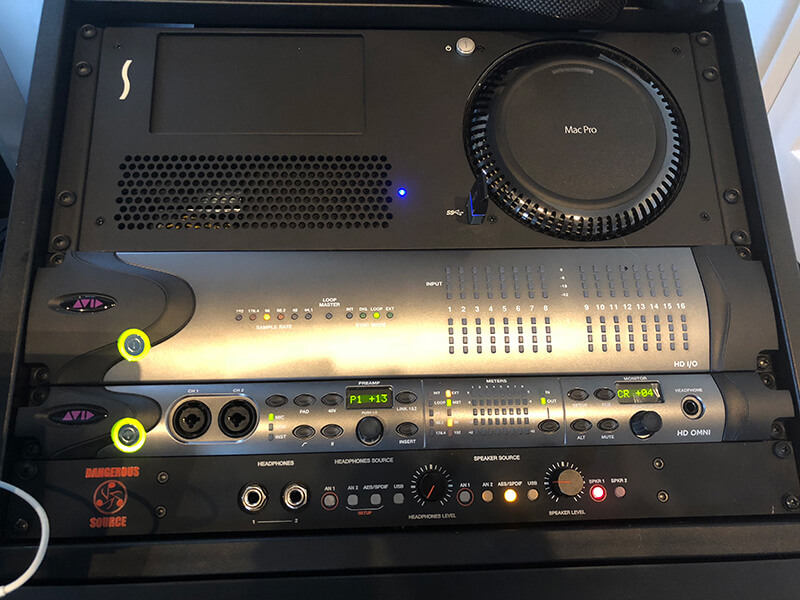 All my analog output then gets routed to my Burl ADC which is then brought back into the DAW via SPDIF so I don’t lose any of that rich analog warmth and preserve the attitude in my signal chain. The Burl ADC was a really great addition to my studio and it really does a good job of making sure that the sound I am hearing out of my outboard analog gear sounds the same when it is brought back into the DAW.

In a lot of audio interfaces, they use cheap convertors, and you can really tell the difference between the interface provided convertors and the Burl.

I have been a Pro Tools user since 1998. I currently own an Avid Pro Tools HDX system with a Mac Pro that has 12 cores and 64GB of RAM, and I absolutely love it. I have my Mac Pro racked in a Sonnet xMac Pro Server 4 RU Rackmount Enclosure.

For me, choosing a DAW is all about how it best accommodates the way you think, your workflows and overall comfortability. Features are important, but at the end of the day, it’s all about workflow and how the DAW works like you want it to. People like to argue about which DAW is better, but for me, it’s all about what works best for you.

I have tried Logic, but it just wouldn’t work the way I wanted it to. I have not tried a Studio One setup or some of the others, but Pro Tools works very well for me and I am very productive with it, and that is all that matters.

My absolute favourite piece of gear is my Thermionic Culture Rooster 2 Dual Mic Pre Amp & Equalizer. It adds such wonderful analog colour and has an amazing ability to add attitude to a mix as desired. It even has an attitude knob! 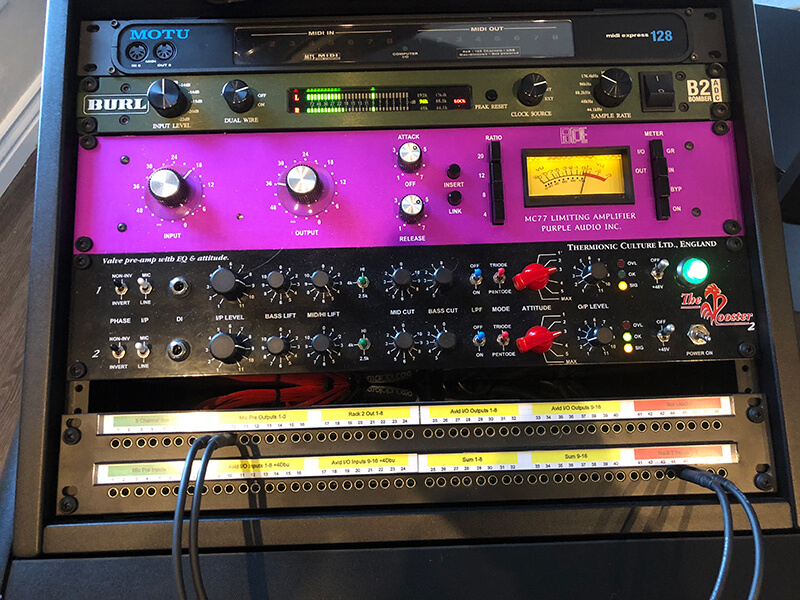 But I run every mix through it and it sounds amazing. It’s a bit more on the pricey end, but it is worth every penny. Second to that, I would have to say my Elysia Alpha Compressor. It’s also very pricey, but it’s such an amazing piece of equipment, and you can do so much with it.

I spend about 16-24 hours in my studio per week. Mostly in the evenings and weekends. I have a day job as a software executive, and that takes up a lot of my time. 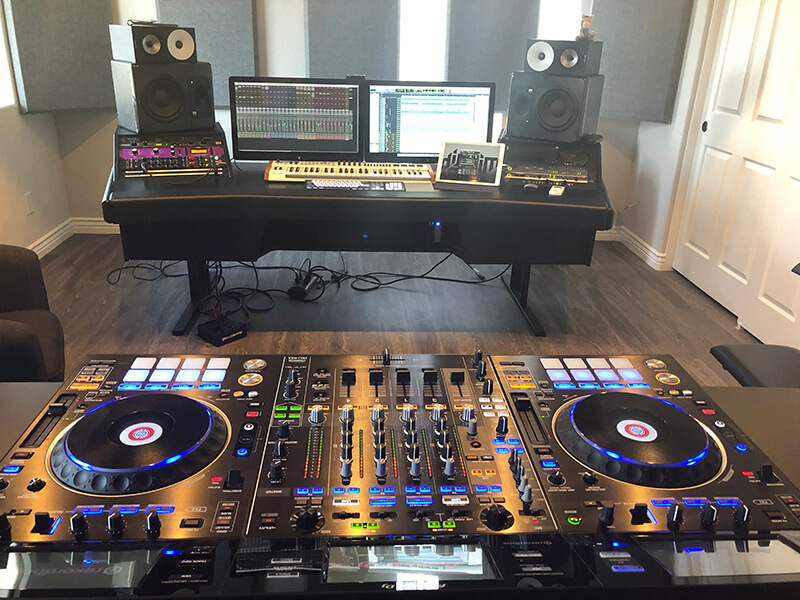 Although, over the last couple of years, I have been working on material I want to publish for a record. I will end up just publishing under my own record label. It’s so easy to do nowadays!

I have a few things on my wish list for the studio. Next up in the studio is a Grace Design M905 so I can extend my available number of monitors and then also get a complete Amphion speaker setup with a sub etc.

Right now, I have good JBL monitors I have had since 1999 as my main mix monitors and I also have a pair of Amphion One15 monitors I use for referencing. I really love the sound of the complete Amphion speaker series, so that will be a nice addition to the studio.

Anything annoy you about your set-up?

In my previous studios, the biggest annoyance was that the rich analog sound from my outboard gear did not sound the same when played back from the DAW. This was a result of the cheap convertors they put in a lot of the interfaces.

In 2016, I invested heavily into my signal chain and introduced the Burl ADC to my setup. Although everything was a hefty investment, the quality of sound it produced was worth every penny. Currently, I have zero annoyances with my studio. It’s really the perfect setup for my workflow and I get everything out of it that I want.

Dream gear for me would be an SSL console like the AWS 948 or 924 Delta. I would love to reshape my studio to be console based as I really like tactile feedback from my equipment. I have worked in a lot of professional studios, and using a console coupled with a DAW is just fantastic. Being able to finger the controls and automate from the control surface is so much better than doing it in the box.

Top piece of advice I could give is to invest in acoustic treatment as much as you can. Having a room where you can clearly hear the mix without interference from standing waves, reflections, etc. is very important to being able to get it right faster.

Having a good sounding room is so important to getting you to your expected result faster. Before I invested in acoustic treatment, I used to have to play my music on all kinds of devices and constantly go back and forth to fix the mix because the bass was to crazy, muddy, etc.

After acoustic treatment, I have very few refactors because the mix sounds the same usually between what I hear in the studio and what I hear in my car, as an example. Rather than buying a $1,000 keyboard, throw it towards some Primacoustic panels and it will make such a difference in your studio.

Start out simple. Don’t go overboard buying things because you think you need them. Do a little bit at a time and figure out what you need based on your experiences. Understand what outcome you are trying to achieve and then look towards how other people resolve those issues. Make the best of what you have and over time, each addition will add up to a room that sounds great, is fun to be in and produces a great song. 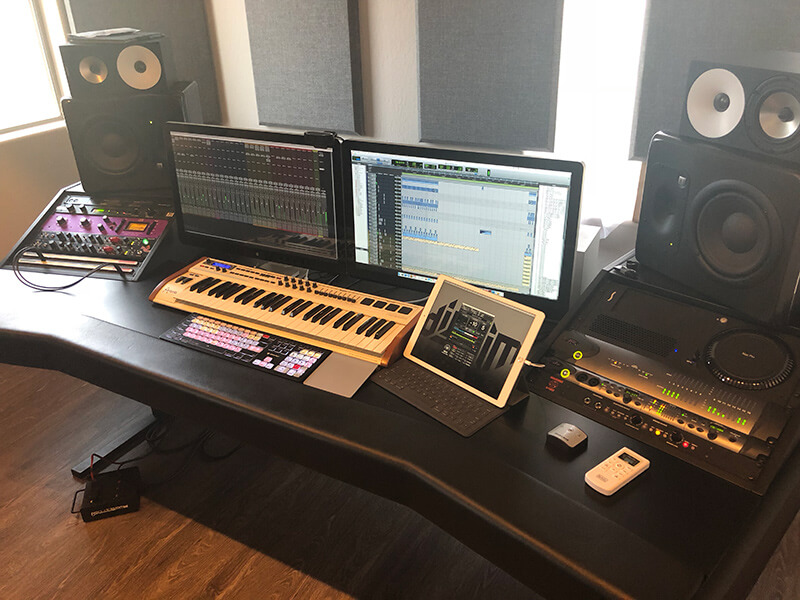