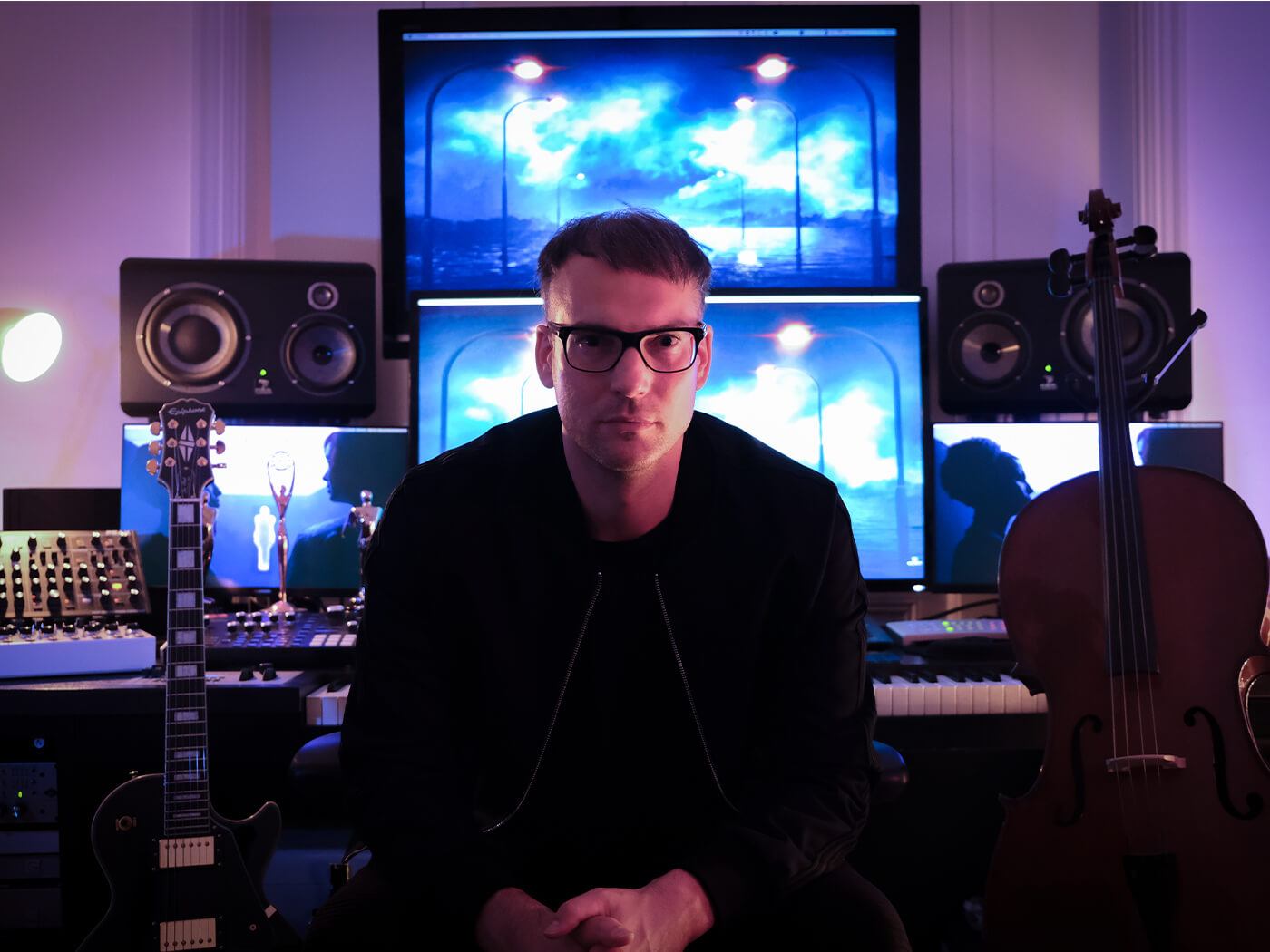 With credits on Call Of Duty: Mobile, Netflix’s Drive To Survive and District 11, Walter Mair knows a thing or two about sound design and production. That’s probably why the Ivor Novello-nominated composer was snapped up to score Till Death with Megan Fox. Director S.K. Dale was drawn to Mair because of his atmospheric soundscapes and experimental approach to music.

Mair invites us into his London studio that’s packed with instruments and machines to show off his custom-made “Frankenstein instrument”, and to elaborate on his strive to find and create sounds that have never been heard before. 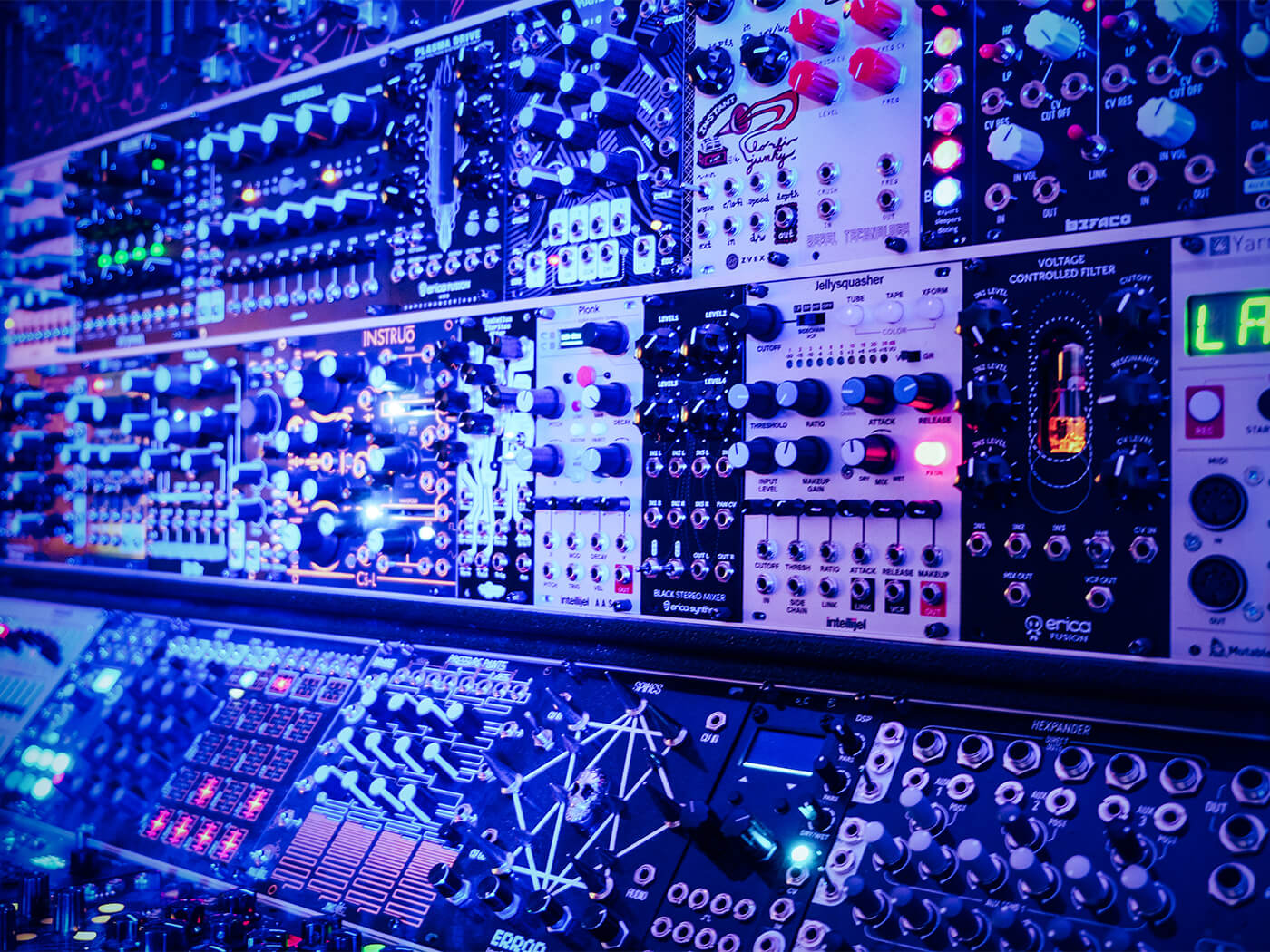 Tell us a bit about the studio, Walter.

I am in the luxurious position to have two studios. One is in the heart of Soho, London and is geared towards meeting my clients – directors/producers. The setup is pared back, and the main focus points are a large screen with a projector, decent speakers and a large couch for my clients to sit comfortably whilst watching the film and reviewing the music.

My second studio is my creative hub, where all the creative magic happens. I’d call this space the ‘lair of no return’. Once you are in there, time flies by fast with all the modular synths and effect units. 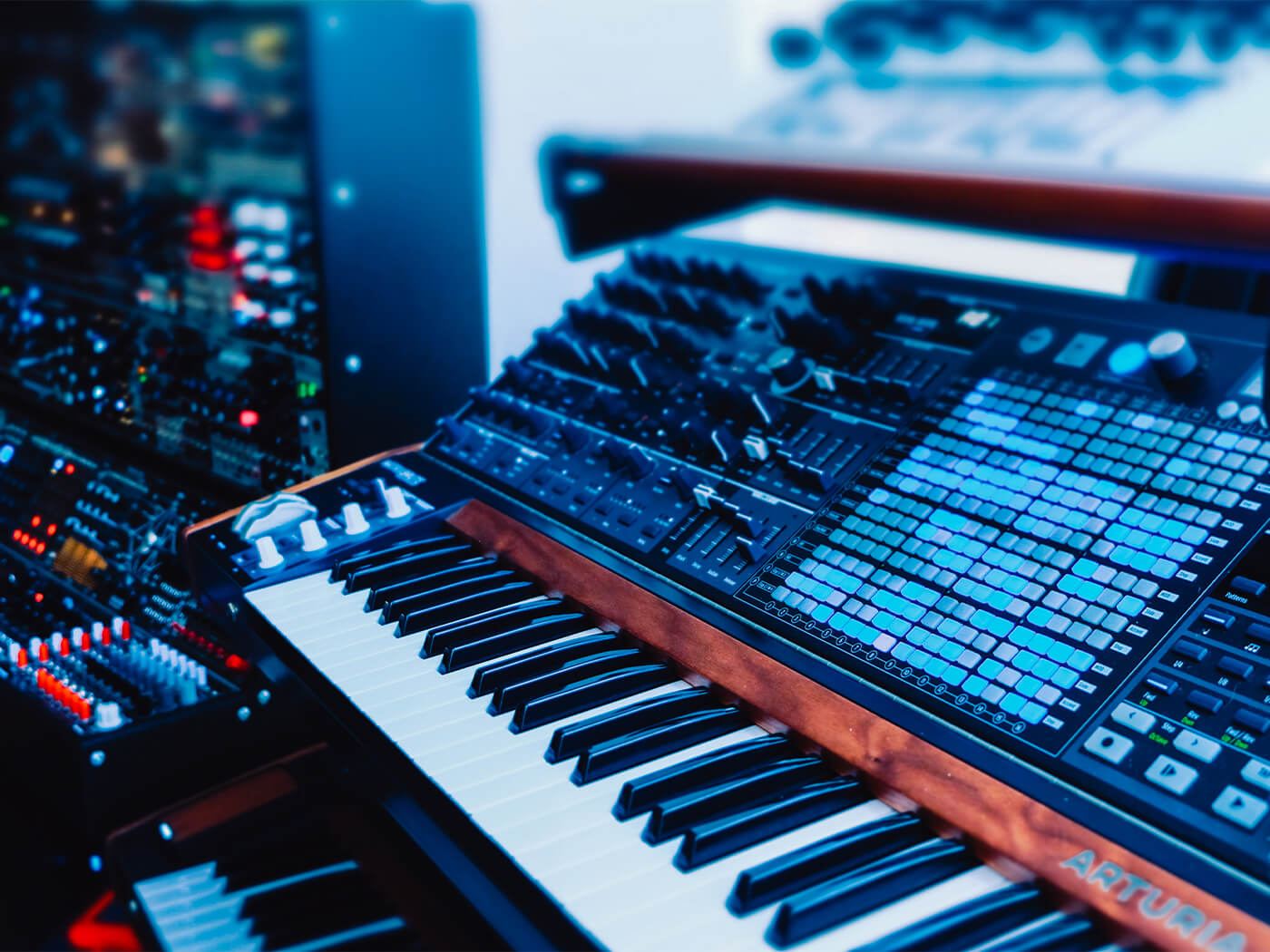 I handle all steps up until the recording session in my studio. This includes early spotting sessions with the director, sketching out first ideas, getting creative with synths and effect units and assembling a mock-up that includes all elements (electronics and full orchestra).
I always go to proper recording studios such as Abbey Road Studios and Air Studios for the actual recordings. It’s the sound, the quality and speed that makes it so important in my line of work to go to studios with great infrastructure and are used to dealing with any possible last-minute client change. 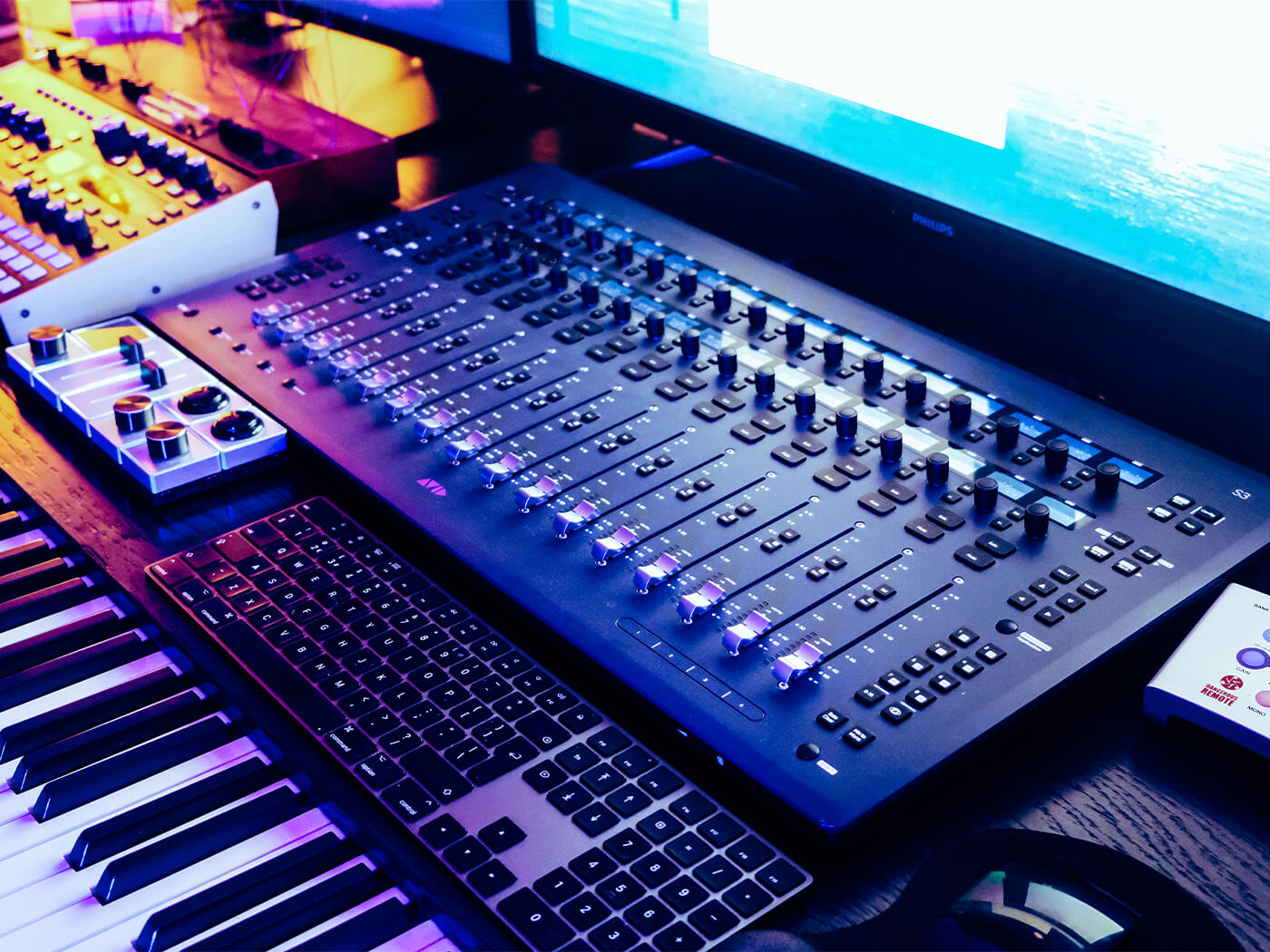 I’ve wired the studio so that I can hit record at any time and capture a performance, enabling me to capture the spark when it happens.

I try to keep the studio as tidy as possible, which includes tucking away cables – a pointless task but I like having a blank canvas when I start working on a new project. Within days, I will have plugged in different gear and caused mayhem in the studio anyway. 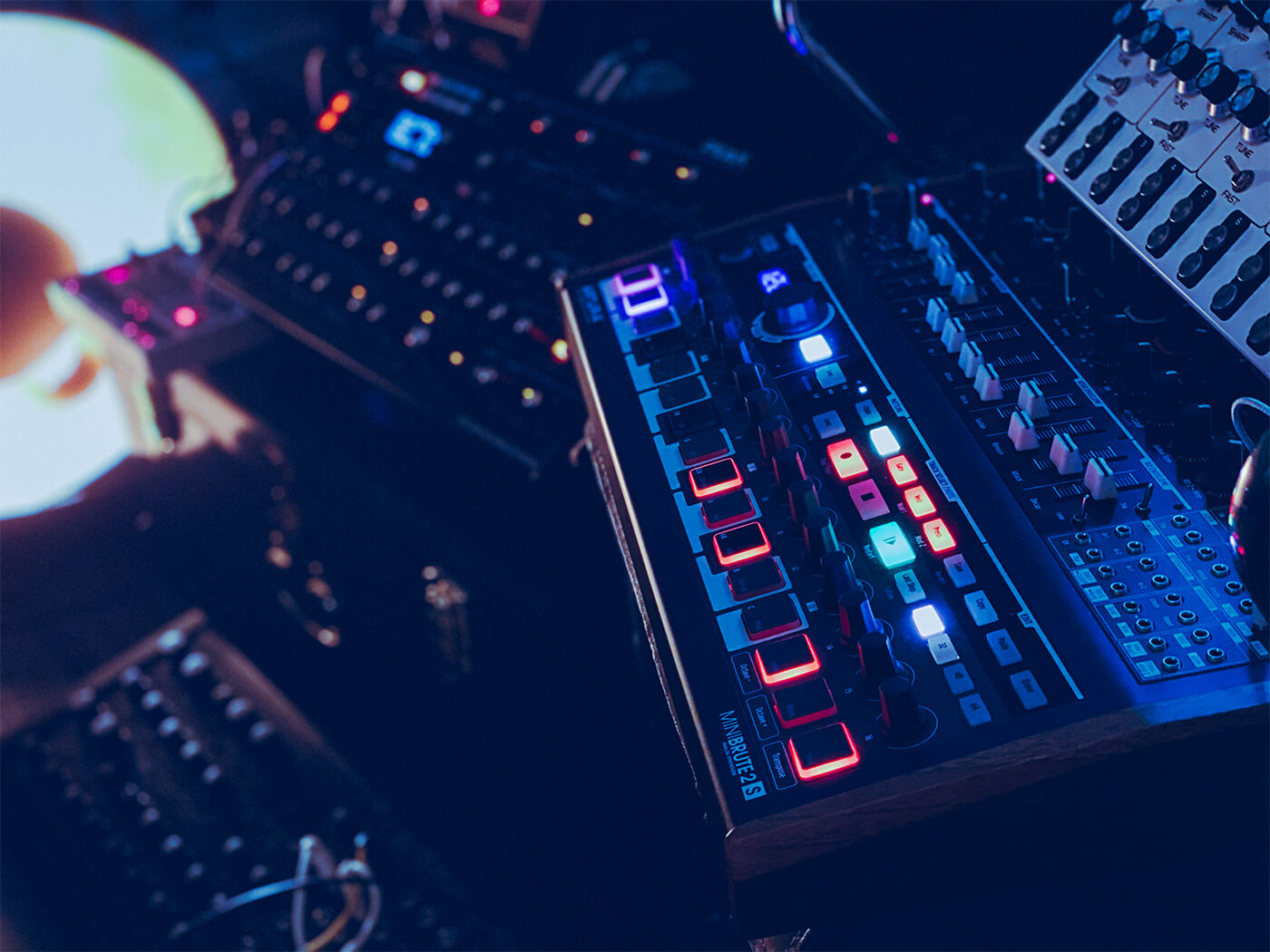 I’ve been using Logic Pro since Emagic still owned it. I’m quite fast with its shortcuts and workflow. I sometimes use Pro Tools when I receive larger orchestral recordings from studios and have the occasional play with Ableton Live, which is great fun.

Are there any instruments that you bought solely for the purpose of creating soundtracks?

I have this unwritten rule: I will buy one instrument per project. Sometimes it’s a synth or a couple of modules for my modular synth rack. I try to keep the initial scoring process as fun as possible. New gear makes you explore sound in a different way, and come up with sounds I wouldn’t have found in any other way. 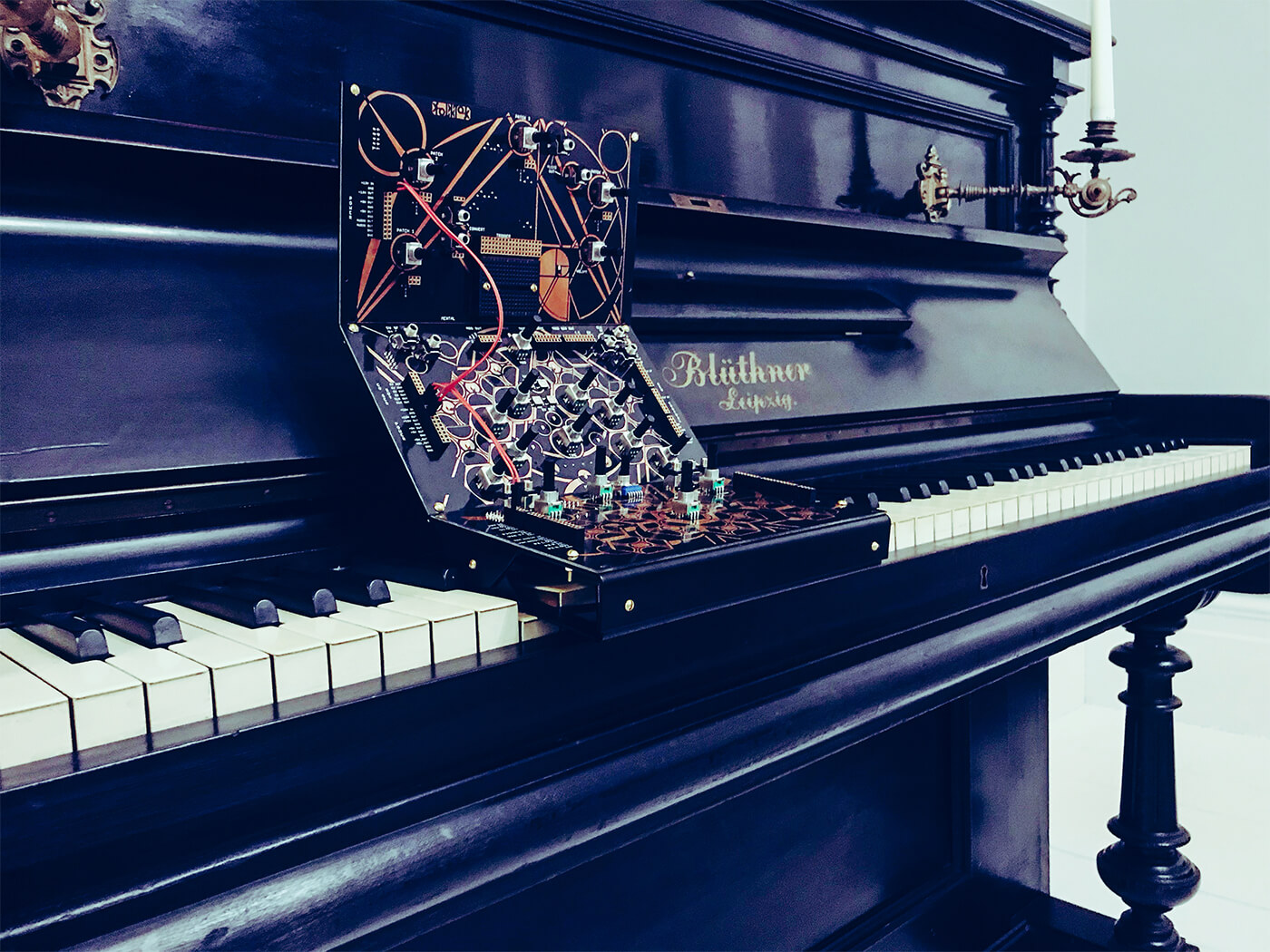 Can you tell us a little bit about your unique instrument?

The instrument is a Frankenstein of a hurdy-gurdy and a contrabass. It borrows the large body and finger-thick strings from a double bass with several motors driving the strings and causing them to resonate. The result is a low-frequency drone sound that you can play with a bow. I’d describe the sound as haunting, dark and menacing. It was exactly what I needed for the Megan Fox thriller Till Death. 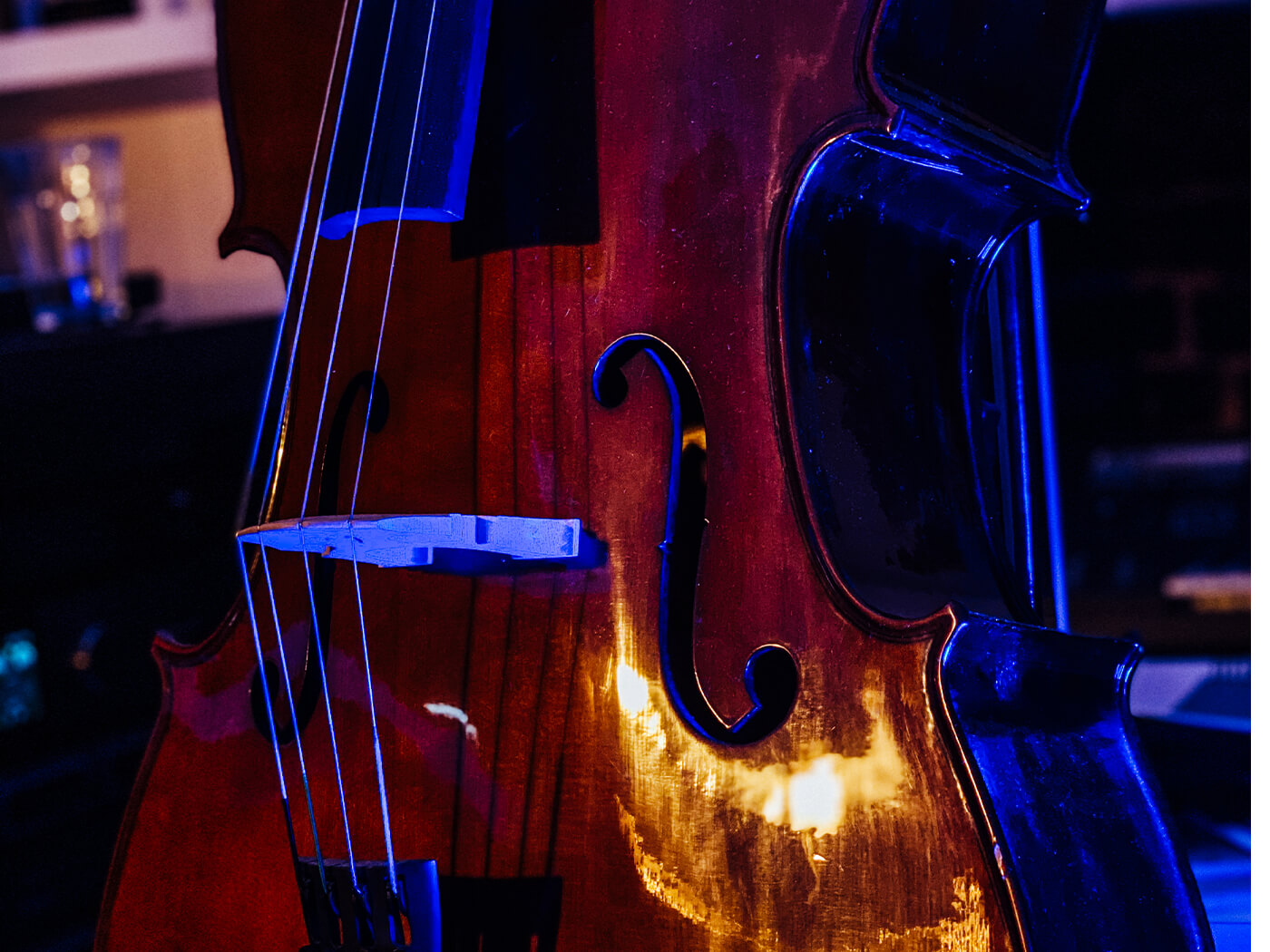 For on-the-go, it’s a tie between the Teenage Engineering OP-1 and my iPad. The latter is fully loaded with a gazillion music apps, sounds, and creative tools to mangle with sounds with diverse samplers and granular synths. The OP-1 is so good for laying down ideas, patterns and grooves, which I then export or use to trigger synths in the studio.

When it comes to studio gear, I have to nominate my modular synth setup. It provides me with an infinite wealth of ideas, effect chains, oscillators and much more. 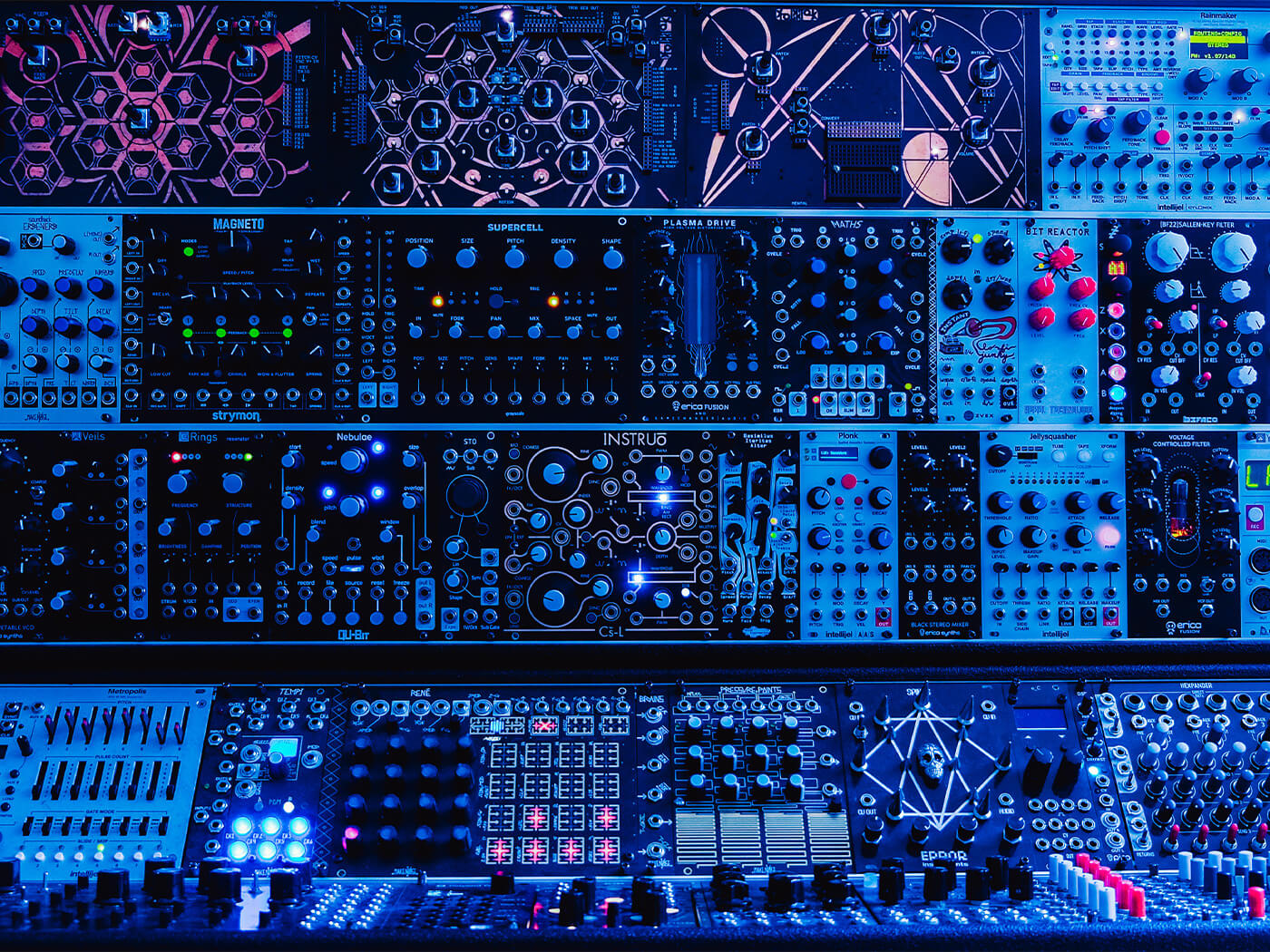 Is there a particular synth or effect that can be most frequently heard throughout Till Death?

I used some fantastic sounding analogue synths and some of the more creative multi-voice synths to create evolving pads and sequences to complement the acoustic recordings. This includes SOMA’s Lyra 8 and the Solar 50 of Elta Music. I also programmed gnarly bass runs on the Arturia MatrixBrute to run through a filter from my Korg MS-20 to add even more grit.

We’re told you enjoy finding sounds that no one else has. What’s your general approach to finding, creating and recording such sounds?

The first days and weeks when I start working on a new project is the most creative time.
That’s when I usually lock myself up in the studio and experiment with sounds and instruments. I always ask myself: “what specific and unique sound does this project need?”
From here, I often brainstorm with instrument makers like Thomas Mertlseder who has already built a few one-of-a-kind instruments for me, including the contra-hurdy for Till Death.

Sometimes, it’s about speaking with musicians and trying to understand their instrument better; how one could play it differently to evoke new sounds. I am a big fan of extended playing techniques on all sorts of instruments, from bowing the cello with the wooden side of the bow, to fixing chains onto the corpus of a double bass which results in quite an extreme sound. 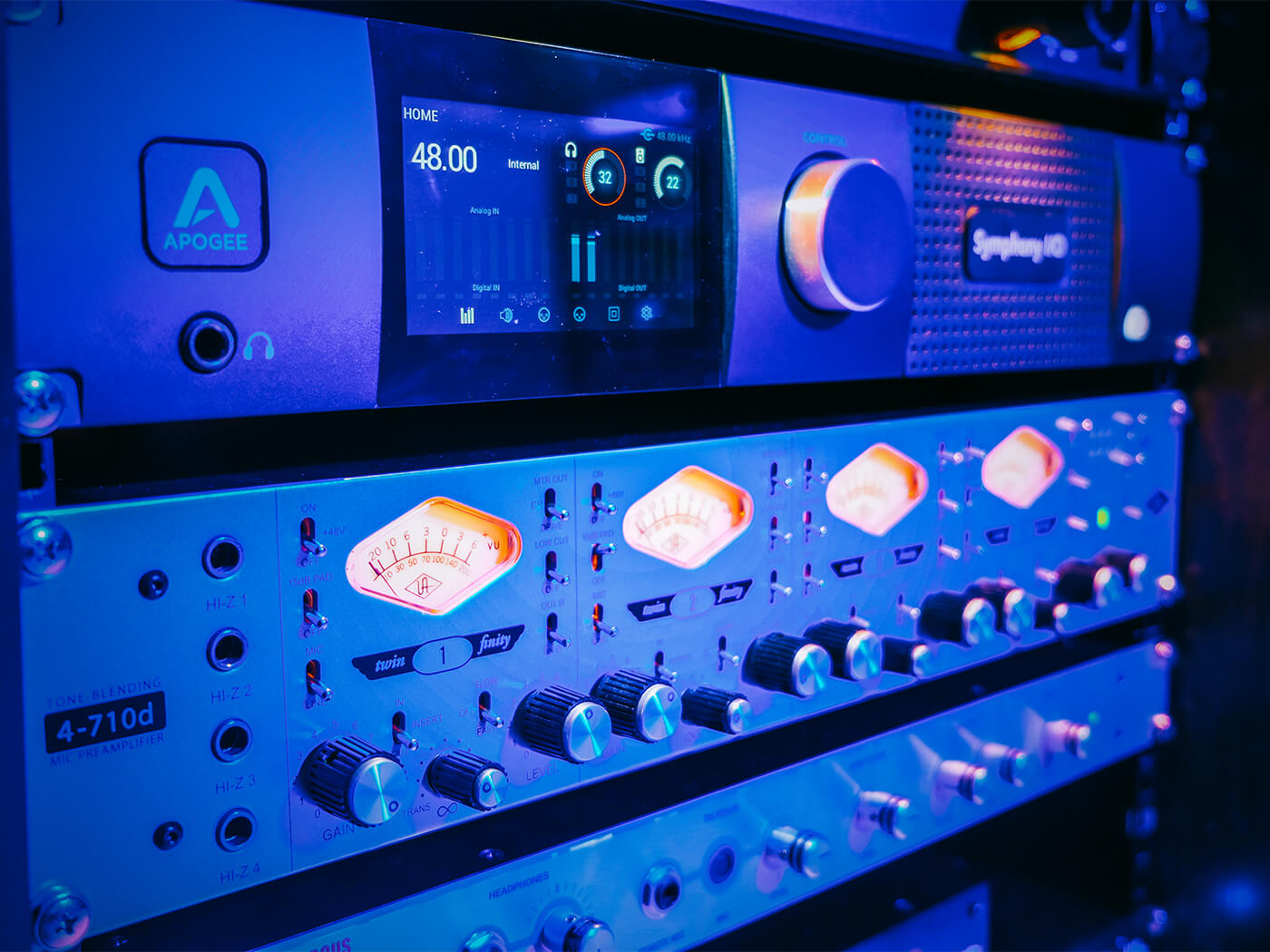 Your work can be heard in the Ronaldo documentary and games including GTA, Splinter Cell and Killzone. How do you make decisions on what kinds of sounds and songs make the cut?

The key element for me is the visual inspiration. This can be a picture, a storyboard, or an early render of a video game. This triggers something in my brain that eventually manifests in an idea, a rough draft, or even the main theme for a project.

Early discussions with creative artists, directors and producers help to find out what they
want the music to convey. I then experiment with sounds and melodies to capture the essence of the film. This often results in me writing a suite that contains a theme and perhaps a couple of different emotions to showcase the palette of instruments.

Teenage Engineering OP-1. I can program beats, play synths and even capture radio programs with the antenna. Then sample fragments and turn the news anchor into a drum set. Who wouldn’t want to do that on a desert island, right?! 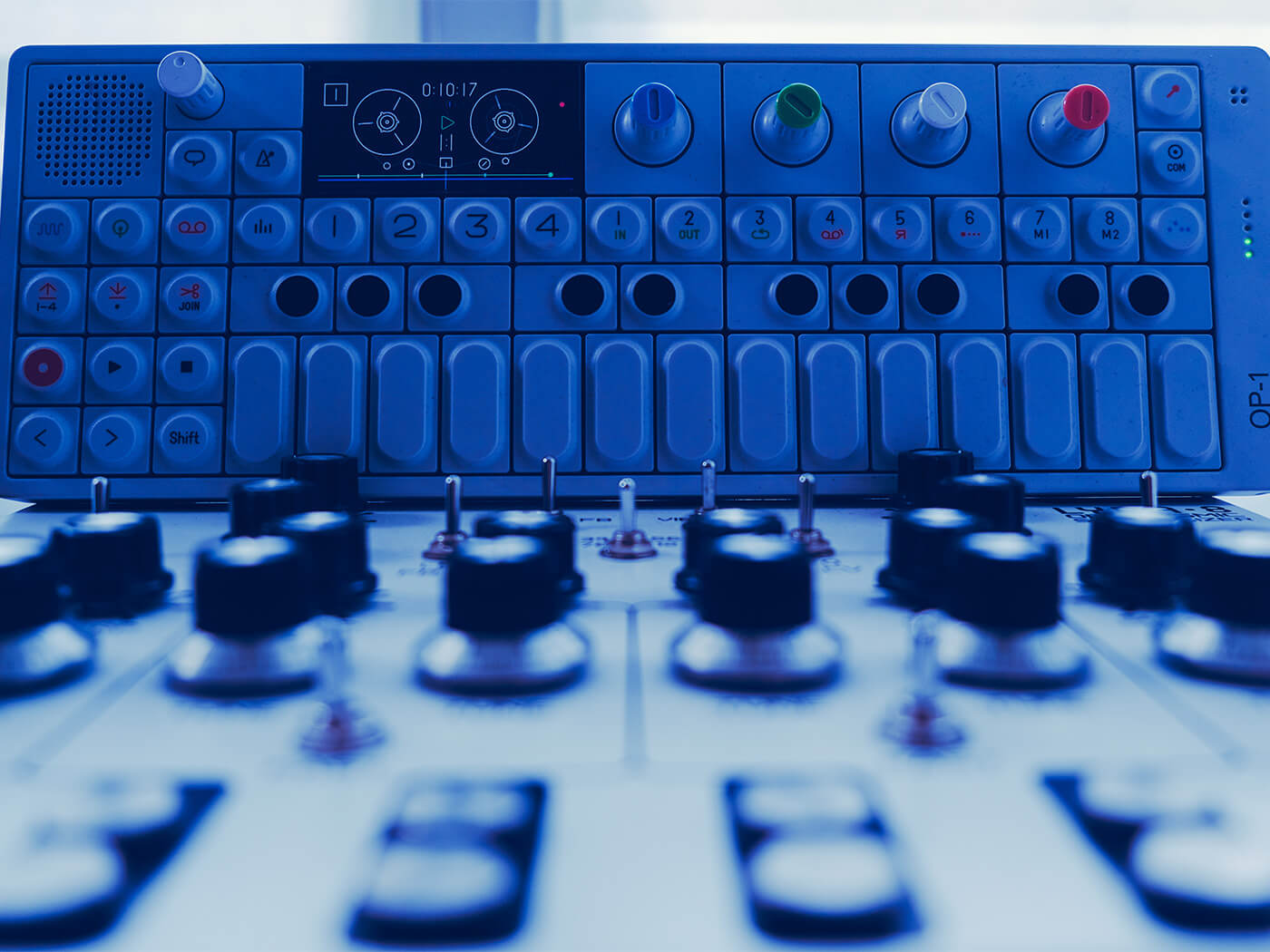 A synth with many oscillators but only one parameter per knob/fader. No menu diving whatsoever and still a very flexible routing matrix to make ideas happen fast. A built-in sequencer that is truly intuitive and helps you come up with ideas and rhythms. Something like a cartesian sequencer that enables changes over time.

Reverb is the secret sauce, just don’t overdo it. To create a three-dimensional space, have a long reverb on a few key sounds and work with shorter reverb times on other sounds. This will help give the mix more depth but still maintain punch and transparency. 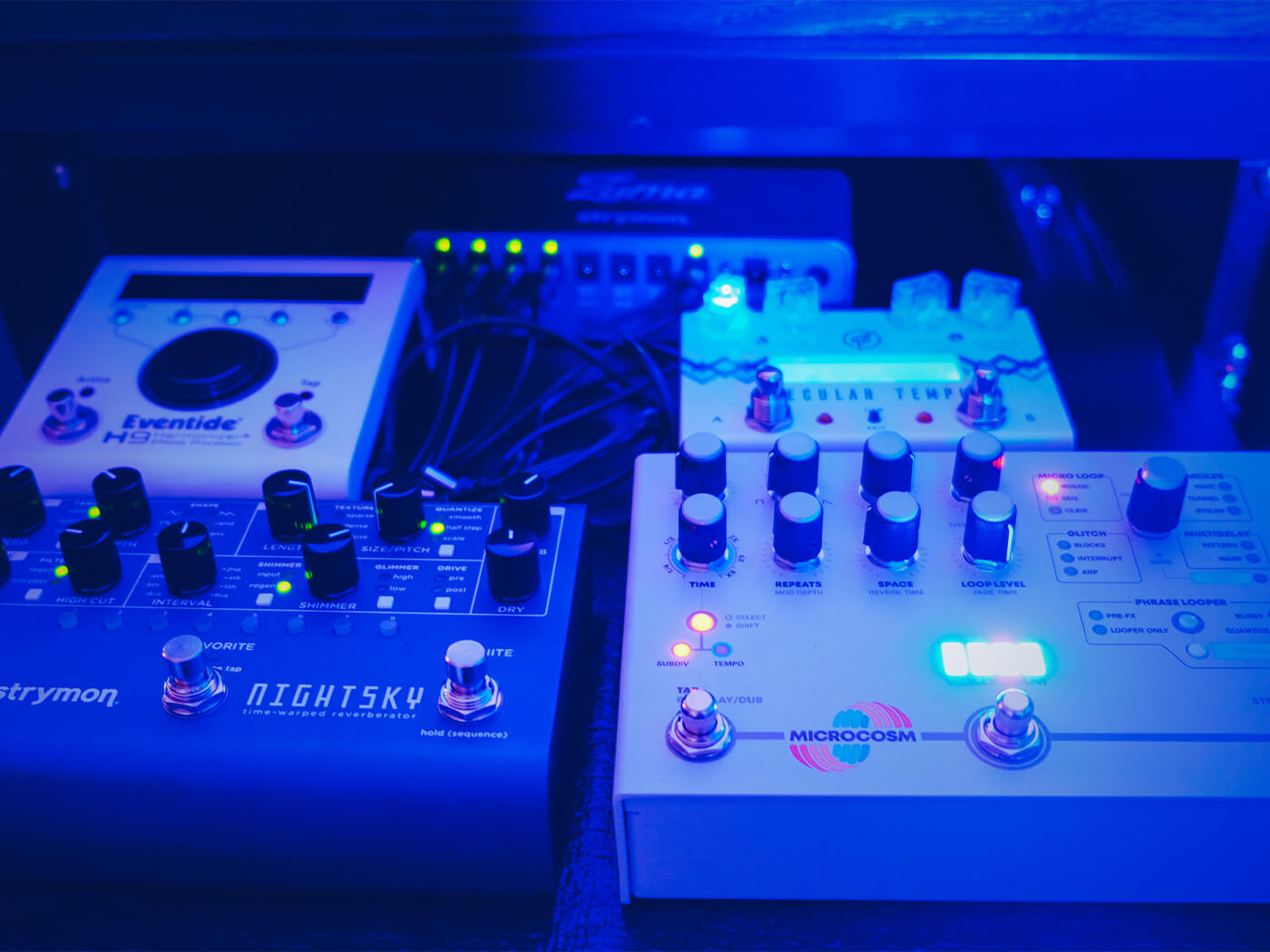 First, ask yourself for the purpose of this studio – is it to write songs, score to picture or produce for video games, or something else? Then purchase equipment specifically for that purpose with a bit of extra headroom for the next inevitable expansion. For example, if you are writing songs within Ableton Live and don’t intend to use any outboard, there is no point in overspending on expensive sound cards with additional mic-preamps. One mic might be enough for now and the money might be better spent on a set of speakers or some software.

In addition, always consider acoustic treatment for your room. It doesn’t need to cost much but a few bass traps and absorbers go a long way, and will make your mixes pop on anyone’s speakers, not just your own set.