Based in Mt.Washington, Eric Scullin tells us about the atmosphere his studio cultivates and how it helps artists achieve their vision. 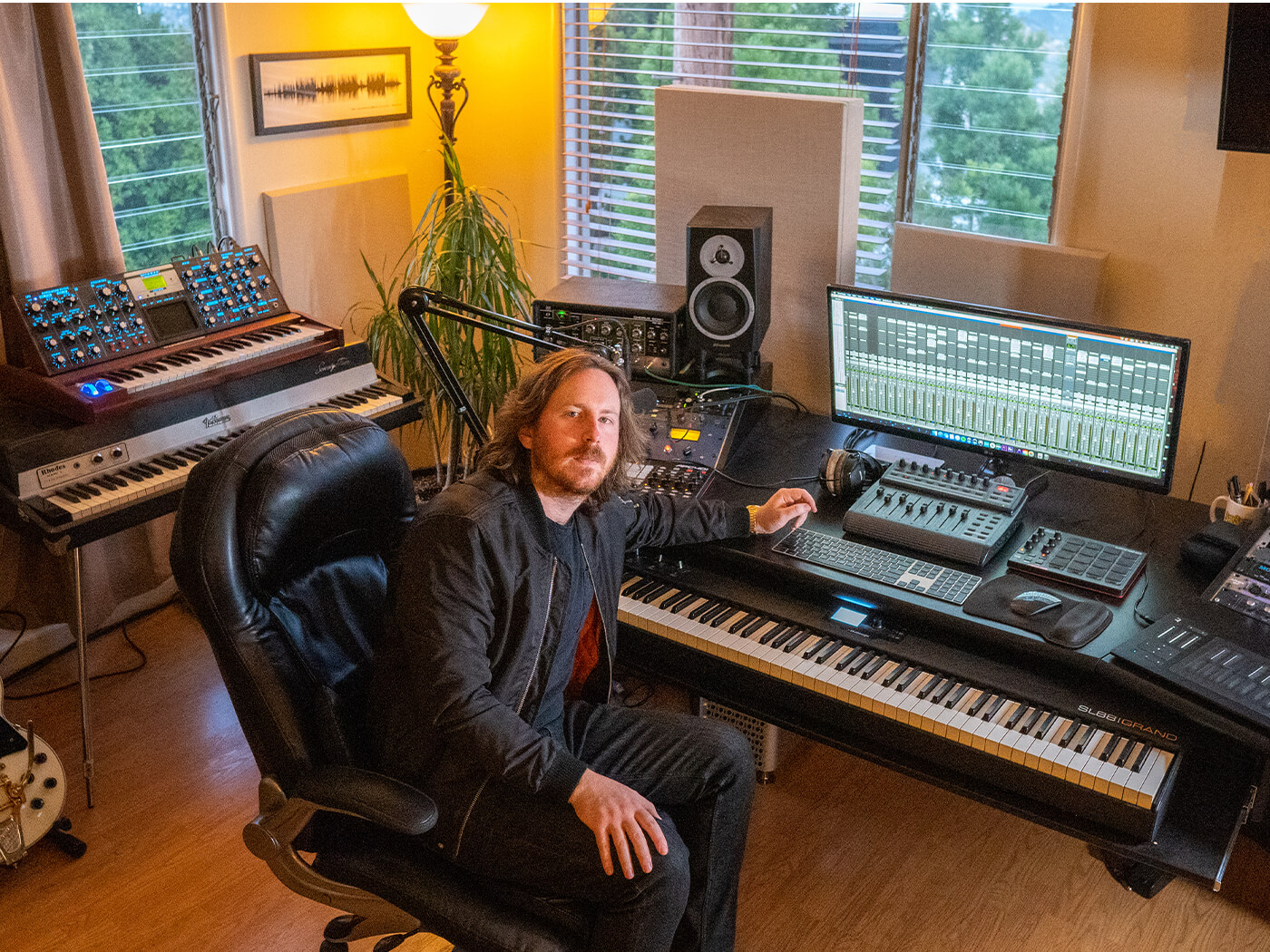 I use it both for my own writing and recording with my band Dysplay and for producing and tracking other artists. I also do musical direction for artists so we’ll have early rehearsals and sessions here in preparation for live shows. 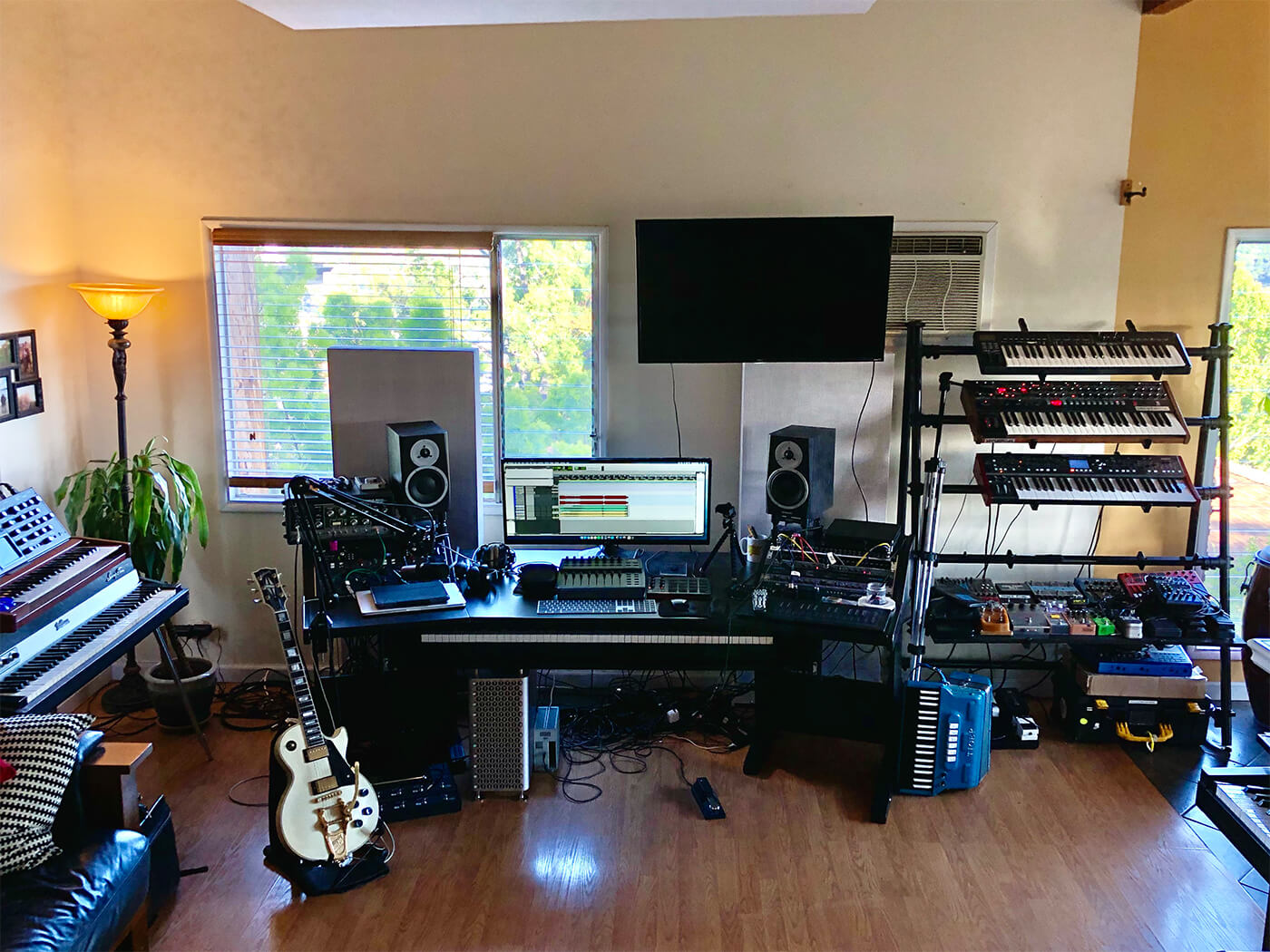 Tell us more about the studio, Eric!

I’ve been in the Mt. Washington neighbourhood of LA for 10 years, which has a lot of hills and greenery, so it’s a nice open-air, almost treehouse feel here. It’s still really close to everything like Highland Park, Echo Park, and Hollywood but feels kind of secluded and peaceful. I like to have as much natural light as possible for the main room where I do most of the writing, mixing, etc. 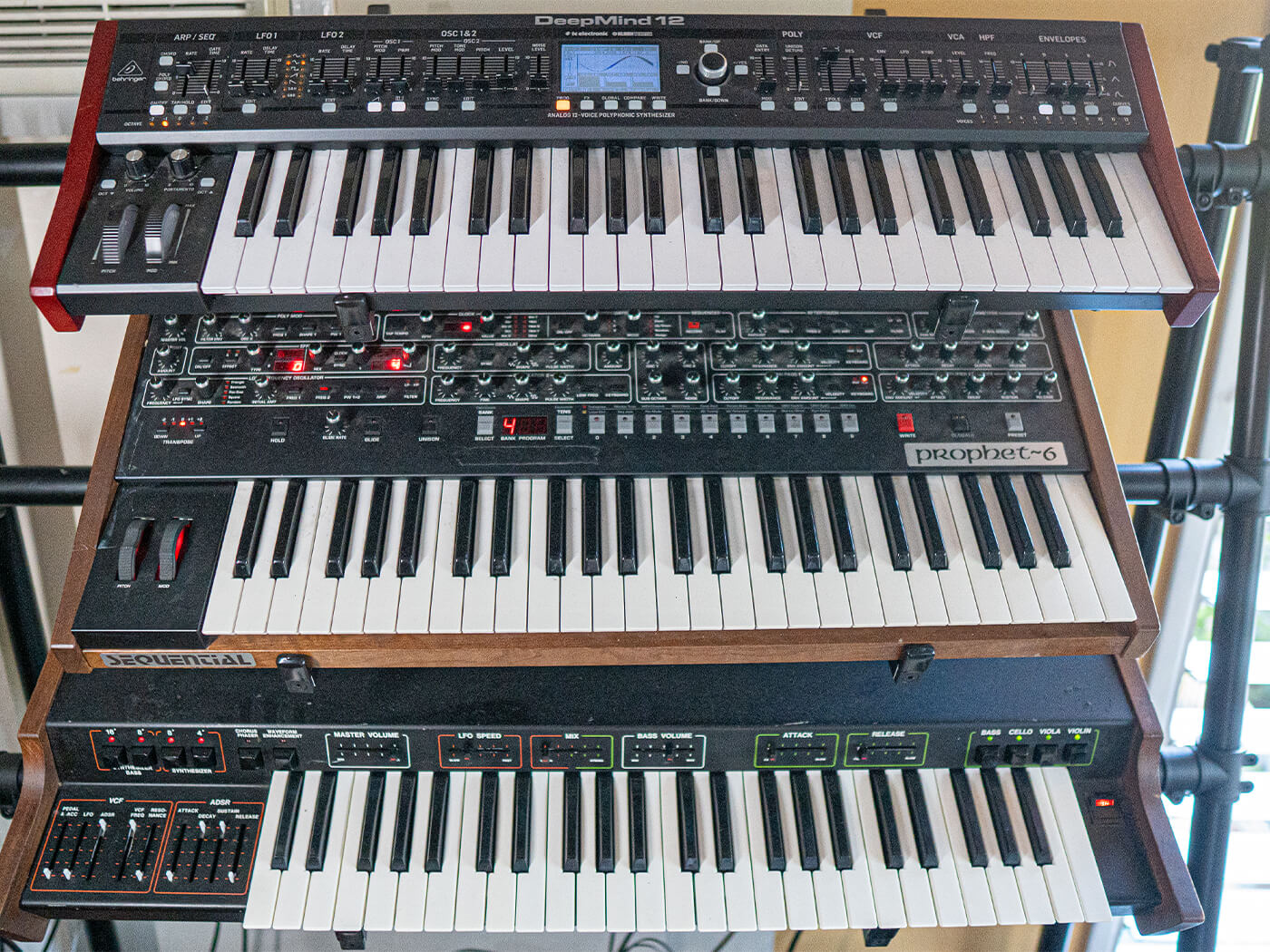 The tracking room is kind of the opposite, and was inspired by the Black Lodge in Twin Peaks. Heavy red curtains and chevron carpet with a lot of acoustic treatment. It’s a great dead-sounding vocal room, but I keep my amps and drumkit in there as well so it’s really an all-purpose live room for anything that needs to be mic’d up. And if I want a roomier drum sound, I’ll move the drums into the main room with some distant microphones.

I use Pro Tools, often with Ableton Live running in the Pro Tools session via ReWire as well. The system is definitely based around Pro Tools as far as I/O. All audio recording and final mixes are in Pro Tools, but I like using Ableton as a browser for sounds and to kind of use both of the DAW’s functionality. I use a redundant Ableton rig for playback onstage when I’m directing artists but otherwise it’s mostly Pro Tools. 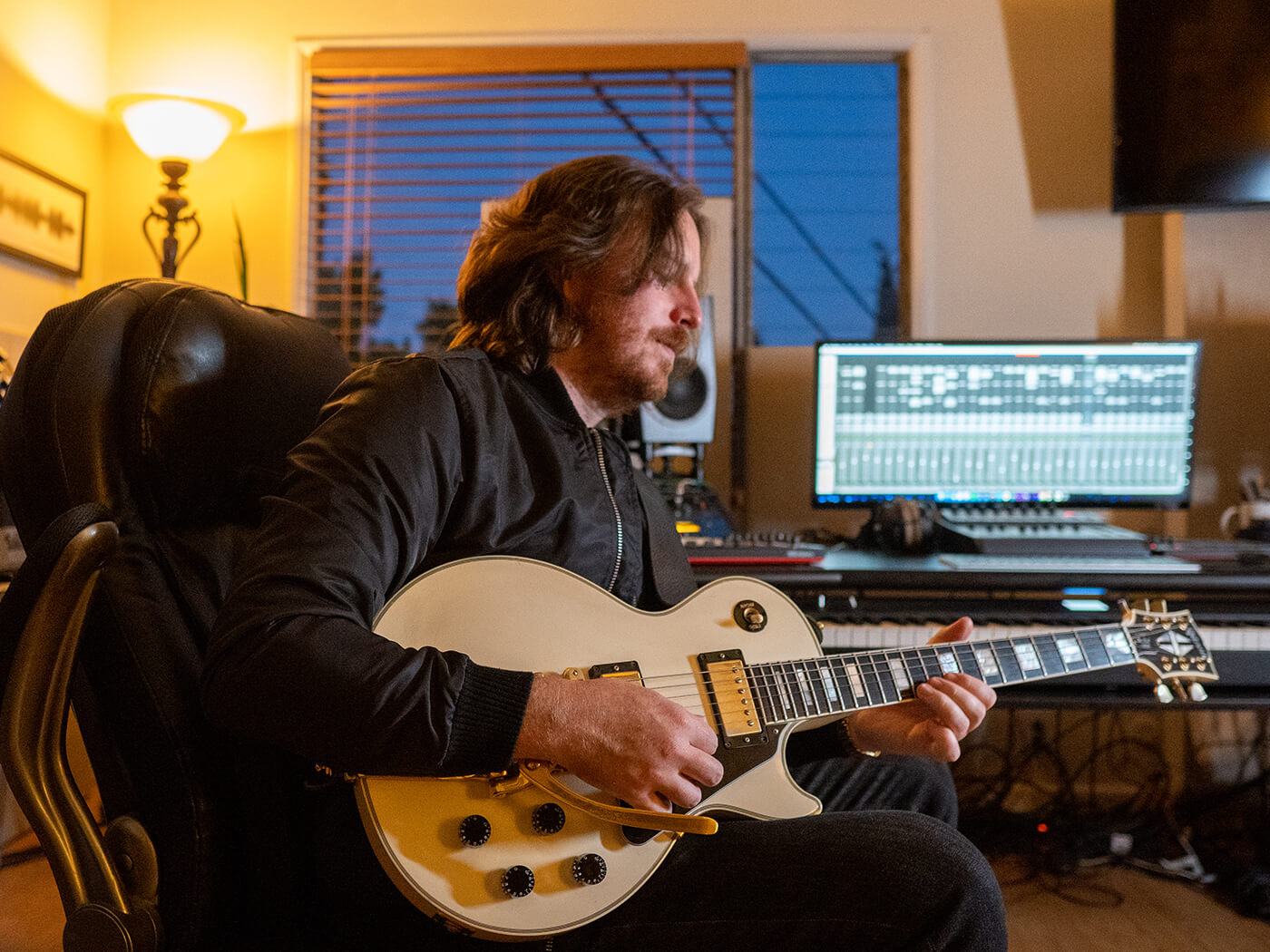 I guess the whole collection of instruments and software I’ve built up over the years. I still use stuff I bought when I was 16 years old; some of the stuff I was lucky to get back then, like my ARP Omni or the early 70’s 100-watt Marshall Super Lead I found at a small store in Huntington Beach. Computer systems and converters/interfaces are obviously big investments but they have a limited shelf life and become obsolete. I don’t think analogue synths, vintage tube amps, or vintage Ludwig kits are going anywhere. 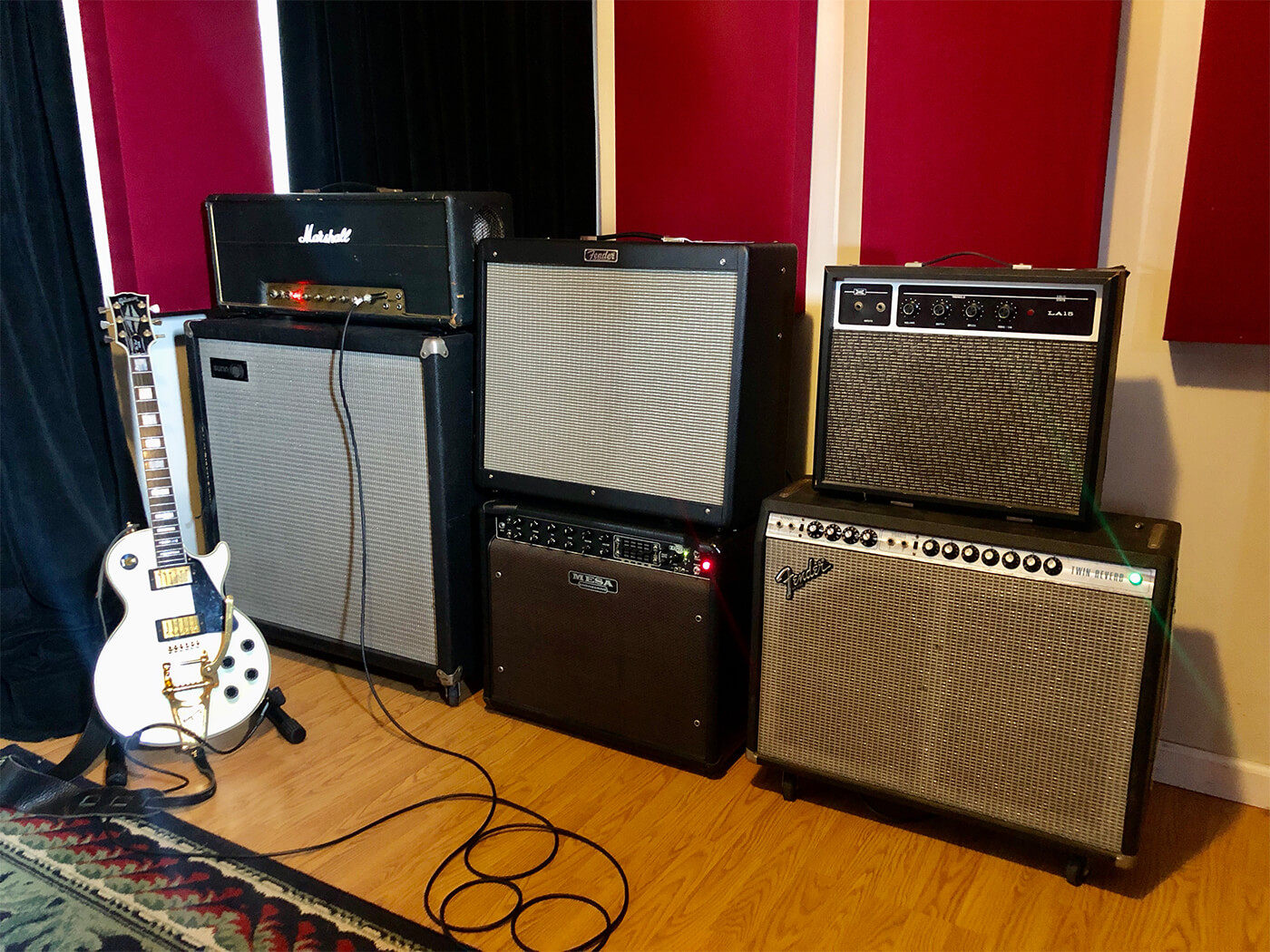 Even though everything is backed up offsite, I’d grab hard drives or my computer tower or laptop.

I really like how open and light it is in my space. Most studios have a dark, enclosed feel to them but I really enjoy the sunlight and seeing the time change throughout the day and into the night. It can give you a different perspective or inspiration to the writing and the sonics. 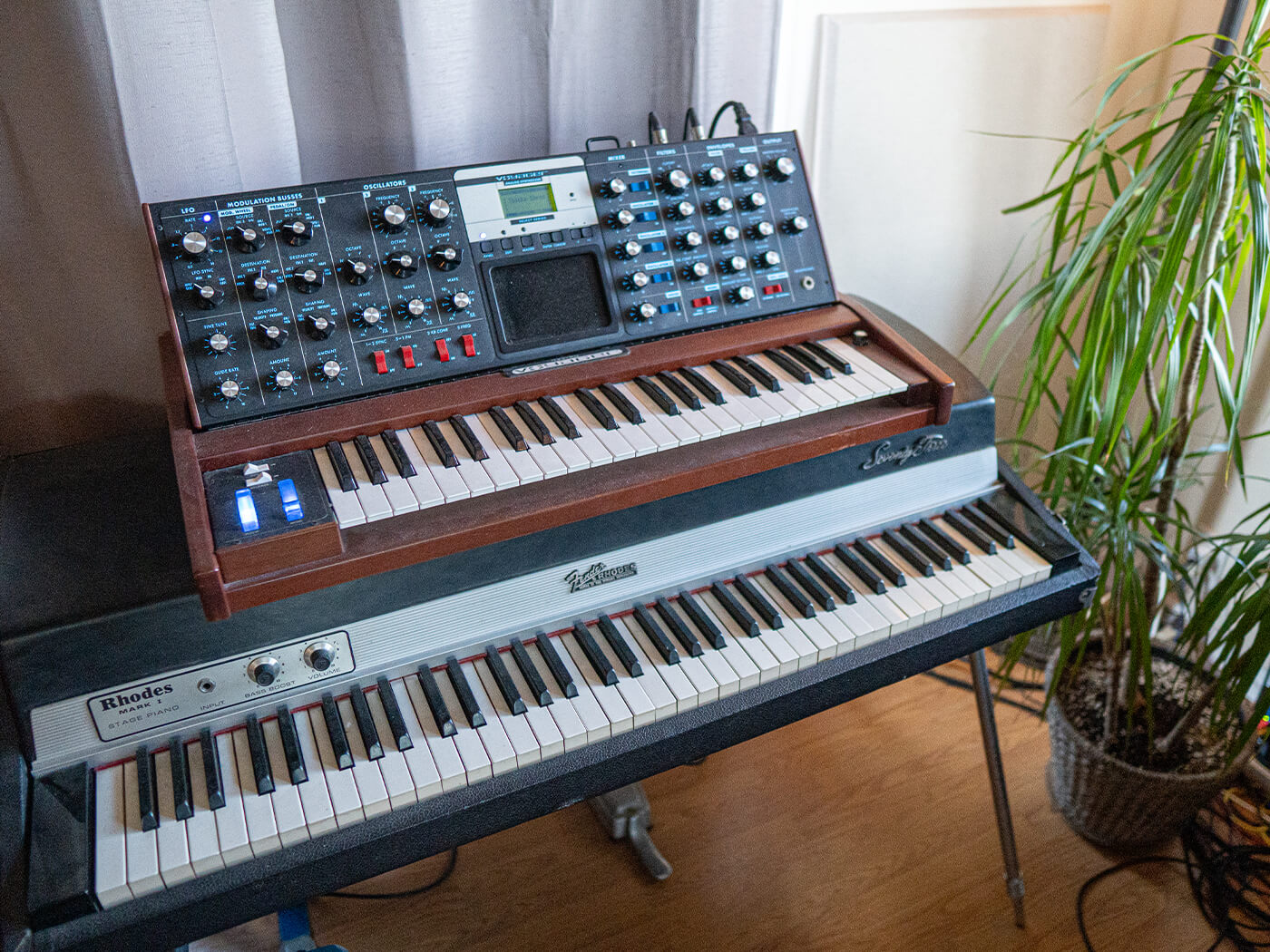 What’s something you use every day that is so boring that it’s not worth mentioning?

The stupid Magic Mouse that has a charging port on its underside so you can’t charge it and use it at the same time. Why would they do that? I would move to a trackball but I’m so used to the movements on the mouse at this point.

I’ve got some acoustic treatment in my main room positioned around the desk and on some walls, as well as a large cloud over my mix position and some big panels behind the desk/ speakers. But I do sacrifice a little bit of sonic neutrality in the spirit of having a good creative vibe with natural light and lots of space. The tracking room is a very treated, dead-sounding space for anything that gets mic’d up. Every surface in there is covered with panels, clouds, theatre curtains, and carpet.

I love helping artists realise the sound in their head and watching a song go from its inception to master and watching the evolution and growth of an idea into something finished.

Can you tell us more about the Twin Peaks live room?

I’ve always loved David Lynch’s whole creative approach and the moods he creates. My band Dysplay has a song very much inspired by the newer season of Twin Peaks called Mr. Jackpots. When I was redesigning the live room I realised that the heavy curtains would double well as acoustic treatment so I leaned into doing a sort of recreation of the Black Lodge for that room. I like to keep the lights low and let singers or myself kind of close themselves off and get into their own mood in there.

So hard to say. I have my first guitar still, a nylon string Yamaha my stepmum bought for my dad. I often pick it up and it takes me back to being young and learning how to play and discovering my love for it.

How are you using the pedals?

The pedals are ready to go for running anything in the studio through them. Guitars and basses of course, but I love running the Rhodes through them to build a keyboard sound that’s not quite Rhodes, not quite synth, not quite guitar. I only use Fractal Audio amp and effects simulation onstage so all the pedals live here full time. My favourite may be some of the creations that Todd Rogers of Tonebutcher has made for me – analogue delays and fuzzes that are super unique. 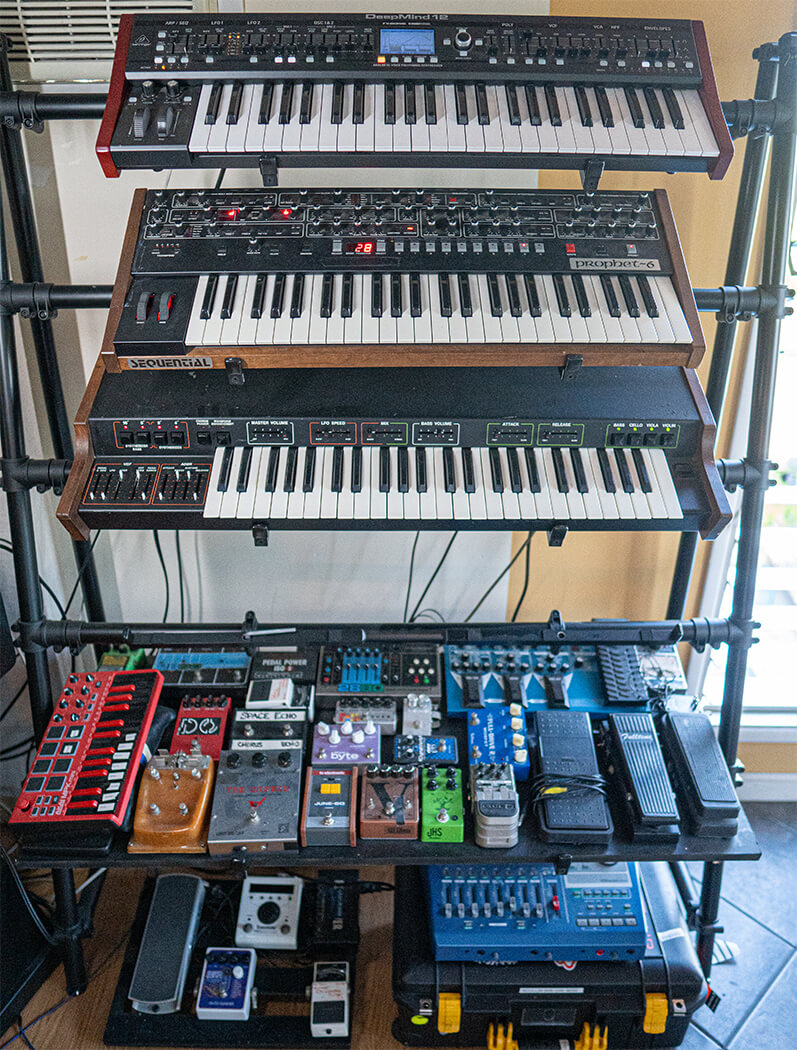 Do you have any stories behind your lovely collection of guitars?

My Martin has been everywhere with me. It’s starting to really wear down in places, maybe going the way of Willie Nelson’s Trigger a little bit. Still sounds amazing. I hope to keep that one around for a long time. 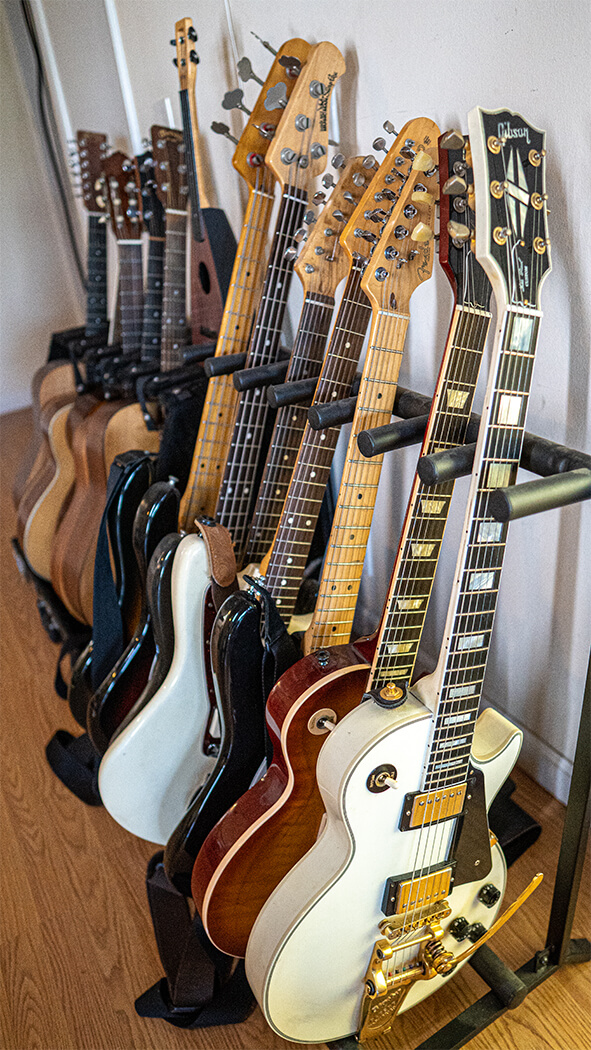 I’m finally at a place where I’m the most comfortable I’ve ever been with the whole workflow. I rearranged my mix position, got a new desk, and finished the current iteration of the live room a few months ago and it’s at a good place for now.

I’m currently without a good Tele so that’s on the list. And there are always plug-ins and libraries coming out that require checking out. As I do a good amount of multi-mic tracking with drumkits, a console would definitely be on the list if it made sense for the space. And there are some vintage microphones I’ve got my eye on. This list goes on forever. 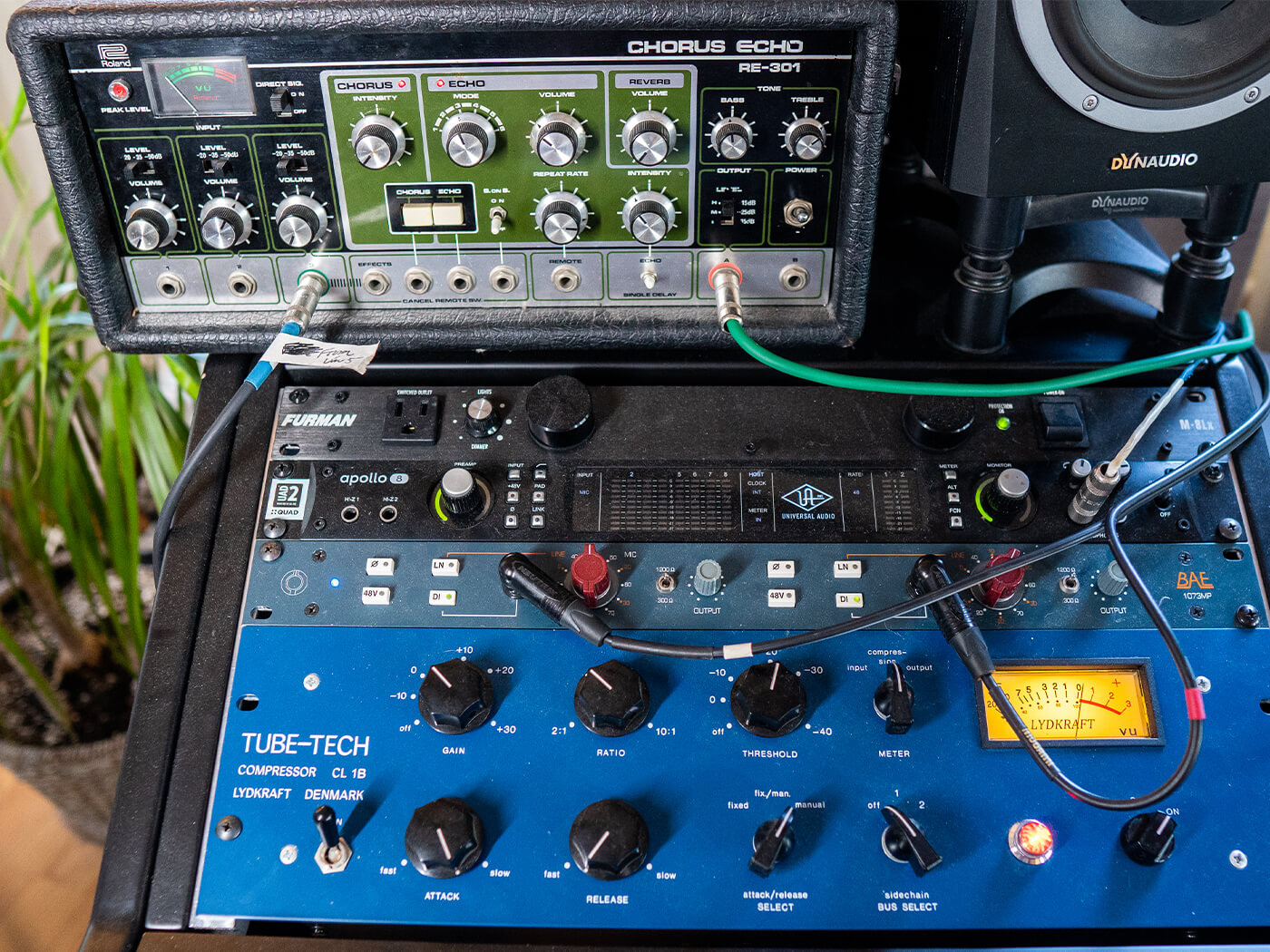 A couple things come to mind that are almost as historical pieces as much as functional studio pieces. A ‘59 Les Paul. An 80 series Neve console. Tough question.

Never forget about the songwriting. It’s everything. 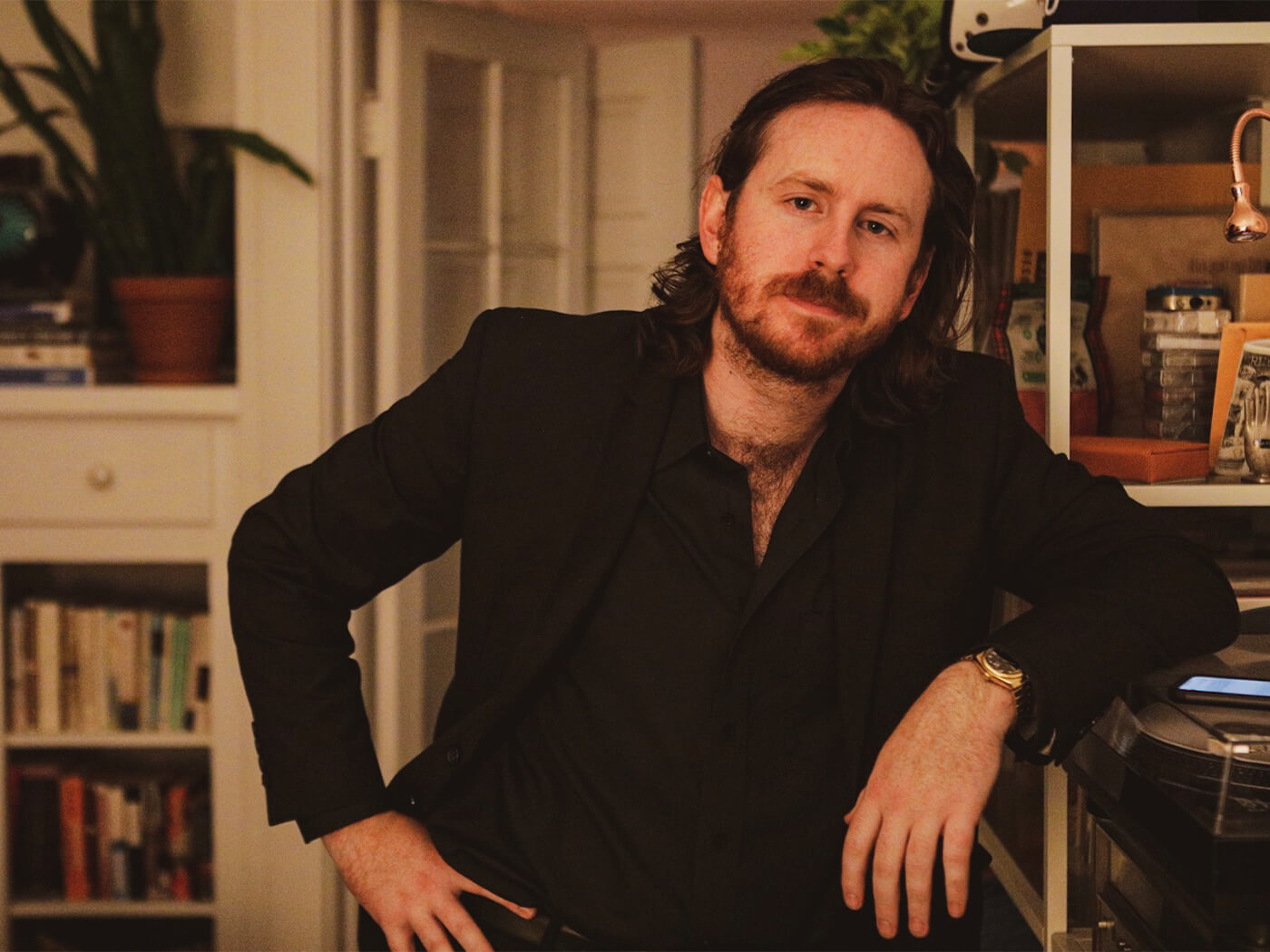 Luckily, you don’t need much to get started these days. A laptop, an interface, a mic, and headphones or speakers and you’re on your way. Just like everything else, practice. Writing, performing, mixing, and production are all numbers games where the more you work on it, the better you’ll get.