What do you get when you cross a harp with an electronic keyboard? Auto chords, strumming and a whole heap of portable weirdness. 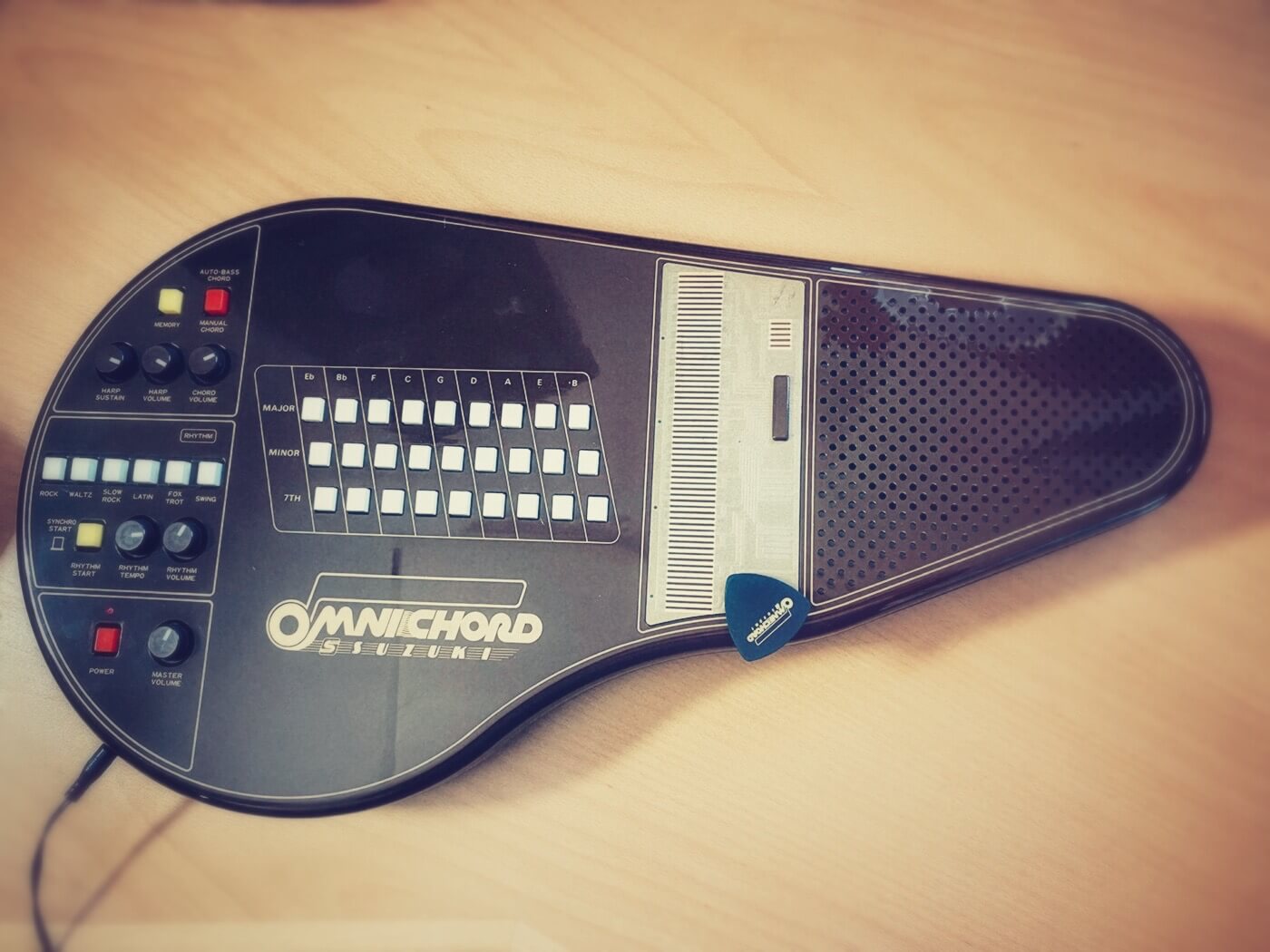 In bygone eras of music technology product design, many instruments veered towards the toy-like. Casio and Bontempi have much to answer for with the advent of the auto-chord system, where a single finger would allow for a complete orchestration, albeit with chords of a distinctly major tonality. Add another finger and you might get yourself a minor chord. A third might even bring on an attack of the blues with a dominant seventh.

I liked trying to confuse these auto-machines by seeing what they made of more complex chordal shapes. But there were no such issues with this half-keyboard, half-harp, half-auto-accompaniment device from Suzuki. (I know that makes one-and-a-half in total but you get the idea.) Not to be confused with the keytar (or guitboard, as described by New Zealand’s madcap musical comedians Flight Of The Conchords), the Omnichord offered a selection of accompaniment styles, including rhythms, basses and chords, as well as the ability to strum using an ingenious metallic touch-strip to mimic a harp- or guitar-style chordal ripple.

In fact, you could consider the Omnichord an electronic version of the ever-popular autoharp, only without the tiresome trait that saw you having to continually retune its many strings. Available in cream, crimson and what might be charitably described by Dulux as Pretty Foul Dark Brown, the Omnichord was never suited to being strapped in like a guitar, thanks to the position of its 27 chord-selection buttons. Instead, portability was always its biggest appeal. Thanks to its battery power source and rather fine in-built mono speaker, you could easily use it on the move – and even treat your fellow train passengers to some light entertainment. I say mono speaker, suggesting that the line output might offer some kind of stereoscopic kaleidoscope.

That wasn’t the case. But what the instrument lacked in stereo imagery, it more than made up for in retro-chic sci-fi aesthetics: the Omnichord wouldn’t look out of place in the hands of Spock in the 1960s Star Trek series. The real joy of the Omnichord was the fantastical sounds it let you create by using the rubber plectrum with the metallic capacitive touch-plate, a concept not unlike that of a ribbon controller. As well as abundant charm, this harp-like strip offered subtle electronic tones over a four-octave range. 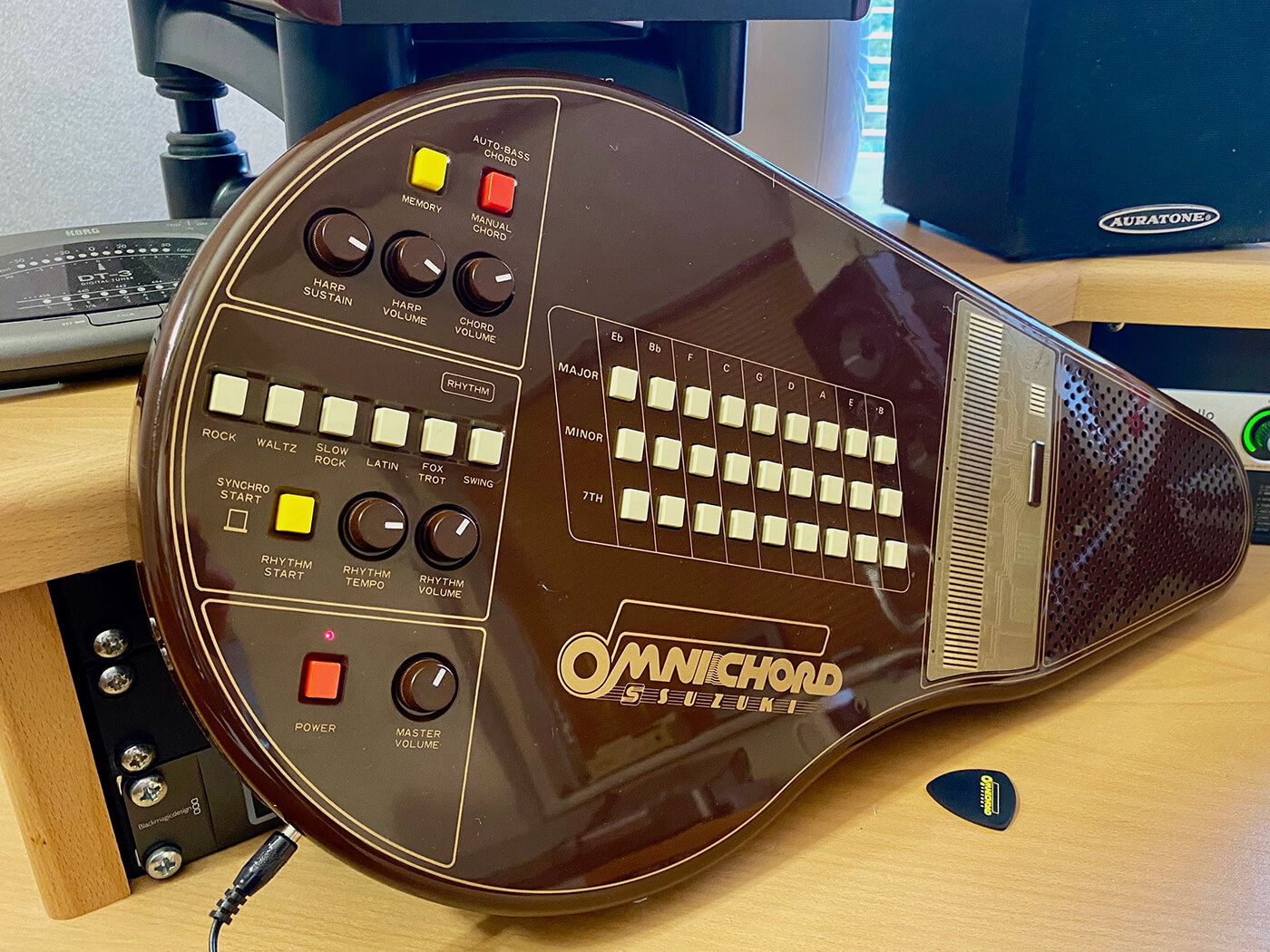 While the onboard rhythms conformed to the usual domestic-level beatbox sounds you might expect – albeit lacking anything below about 200hz due to the aforementioned in-built speaker – it was the harp-like tone of the Omnichord that so many found attractive. It was flexible too. You could turn down the potentially invasive background chords, basses and rhythms to allow the rippling harp tones to do their thing undisturbed. You’ll hear these same tones in the introductory bars of Eurhythmics classic Love Is A Stranger, before Annie Lennox takes the lead. The British new wave icons aren’t the only stars that the Omnichord has endeared itself to over the years. Such luminaries as Damon Albarn, Nick Rhodes, Brian Eno and Joni Mitchell have been seduced by its versatility.

I’ve been known to exploit my own Omnichord for both lead-line rippling duties and heady auto-accompaniment backbeats – but I’ve never been tempted to go mobile and serenade my fellow commuters, though that’s largely because my machine suffered the scourge of the battery leak many years ago, leaving me firmly tethered to the power supply. You can find these sonic curios via the usual online auction sites.

If you’re feeling particularly flush, order the latest incarnation, known as the QChord, from Suzuki. Even if it ships with a price tag higher than that of many current mono-synths, its heart is the same as it ever was. It remains an all-in-one instrument – in a shade of brown that still shares a colour contrast with 1970s flock wallpaper. Nice.