In its infancy, Steinberg’s pioneering program, now one of the world’s major-league DAWs, revolutionised many an approach to production 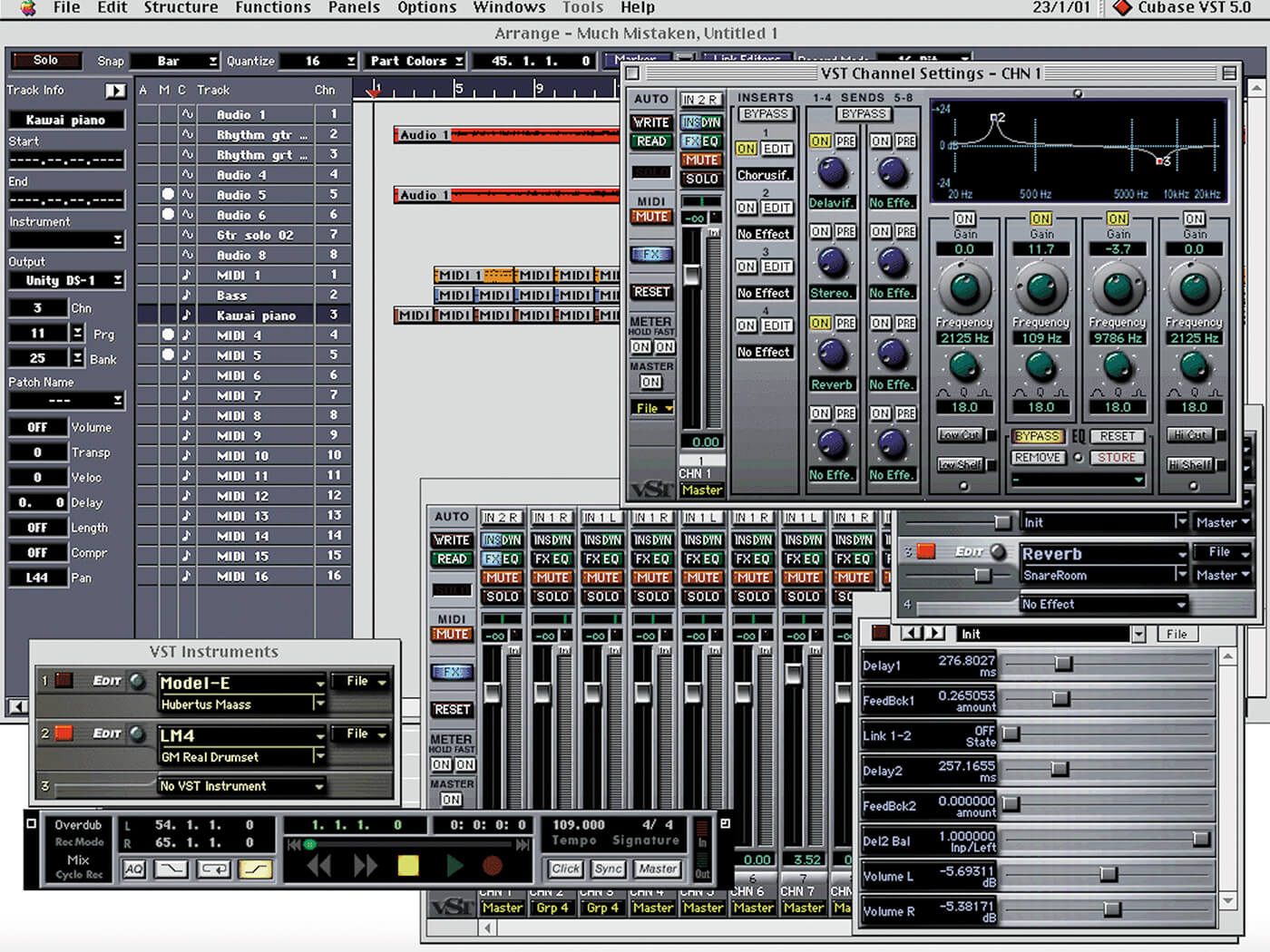 It’s the Autumn of 1997 and I’m sitting at an Atari Falcon attempting to process short samples of audio for a university composition project. With this erstwhile state-of-the-art computer, it’s very much a press-and-walk-away affair, since all the rendering takes place offline – and takes absolutely ages. I leave the hot machine and head to the campus canteen in search of refreshment. There, I encounter other frustrated music technologists in the same precarious position: we’re all hoping the resultant sounds are going to match our intentions and that we don’t have to hit undo and start all over again. We’re also desperately hoping for a better way of working to come along and, almost overnight, it does – and then some.

As new Pentium PCs arrive with Steinberg’s first Windows version of Cubase VST installed, there’s a palpable excitement in the air. Not only do the graphical interfaces on screen look reminiscent of the studio hardware units we know and love – a pioneering example of the design trend known as skeuomorphism – but we are also able to import and process audio material in real time alongside MIDI sequences. This gives amazing immediacy to the music-production process that had not previously been possible. With long waits a thing of the past, the Atari Falcons begin to gather dust, while sales of caffeinated drinks in the canteen plummet. We’re all hooked on our voyage of discovery, seduced by colourful graphics and the seemingly unlimited (and non-destructive) possibilities of this new way of working.

Prior to the launch of its groundbreaking Virtual Studio Technology, German company Steinberg had gained popularity with its Cubase MIDI sequencer on multiple computer platforms, it being a fierce competitor to Emagic’s dependable Notator (the forerunner to Logic Pro). As well as real-time audio-effects processing, Cubase VST allowed for multi-track recording and mixing within the software itself, which bypassed the fiddly process of synchronising an external tape machine and MIDI sequencer.

Coinciding with processing advancements in PC hardware, the barrier to entry for home music production was lowered considerably with Cubase VST, just as the MIDI-ready Atari ST home computer had done for music more than 10 years previously. Users could now record up to 32 tracks of 16-bit audio and add real-time EQ and effects on a humble, even home-built, Windows-based workstation, meaning they didn’t have to own expensive Mac hardware. It was at this point that the digital audio workstation as we know it took shape, as Cubase VST spurred on countless bedroom producers with a compact and affordable workflow.

While the importance of this fledgling DAW software shouldn’t be underestimated, it’s perhaps the definition of new audio plug-in standards that is the most enduring and important development to come out of Cubase VST. Steinberg provided a framework for add-on effects processors and, later, software instruments. The VST format plug-in surged in popularity as third parties began developing effects for the platform; indeed, the hunt for inexpensive and free plug-ins inspired a real sense of community, as users began to use the fledgling internet to search for interesting and inspirational ways to expand their effects collections.

While most widely employed a range of Windows music software, the VST still finds its home today on affordable and freeware DAWs that operate on both PC and Mac. Encouraged by the Steinberg model for expandability within a native DAW, others in time followed suit, most notably Apple with its Audio Unit (AU) plug-ins and Digidesign’s Pro Tools RTAS/AAX formats.

The following year, 1998, saw further big developments in the Cubase camp in the form of Rewire. Co-developed with Swedish brand Propellerhead (now Reason Studios), Rewire provided a helpful albeit flaky method for synchronising the audio and MIDI streams of other software such as Rebirth and third-party virtual samplers to Cubase VST. This was a hugely popular move, fitting in with the VST plug-in model of modularity and allowing musicians to expand their sonic palettes exponentially for little extra cost.

Having witnessed the powerful package of DAW and virtual instruments/samplers working together, Steinberg pulled another trick out of its hat with the VST2.0 standard in 1999. Implementing MIDI control within the VST plug-in – and reacting to the dwindling prices of system RAM – the canny Cubase developers once again changed the face of music computing, shifting another tranche of studio hardware towards obsoletion. Virtual instruments and samplers had arrived in the studio, reducing the reliance on cumbersome ‘hacks’ such as Rewire and practically giving final shape to the digital audio workstation as we know it today.

Following a big overhaul in 2002, Cubase VST was no more, replaced by the shiny Cubase SX. Crucially, the VST spirit lived on in the form of important groundwork that had pulled everything together and had been the envy of other manufacturers worldwide. Join me in raising a glass for the pivotal Cubase VST.