“I like my records to sound dirty and different”: Hot Chip and Ghostpoet engineer Shuta Shinoda

The MPG Awards nominee shares how he’s enjoyed massive success by devoting himself to analogue and all its imperfections. 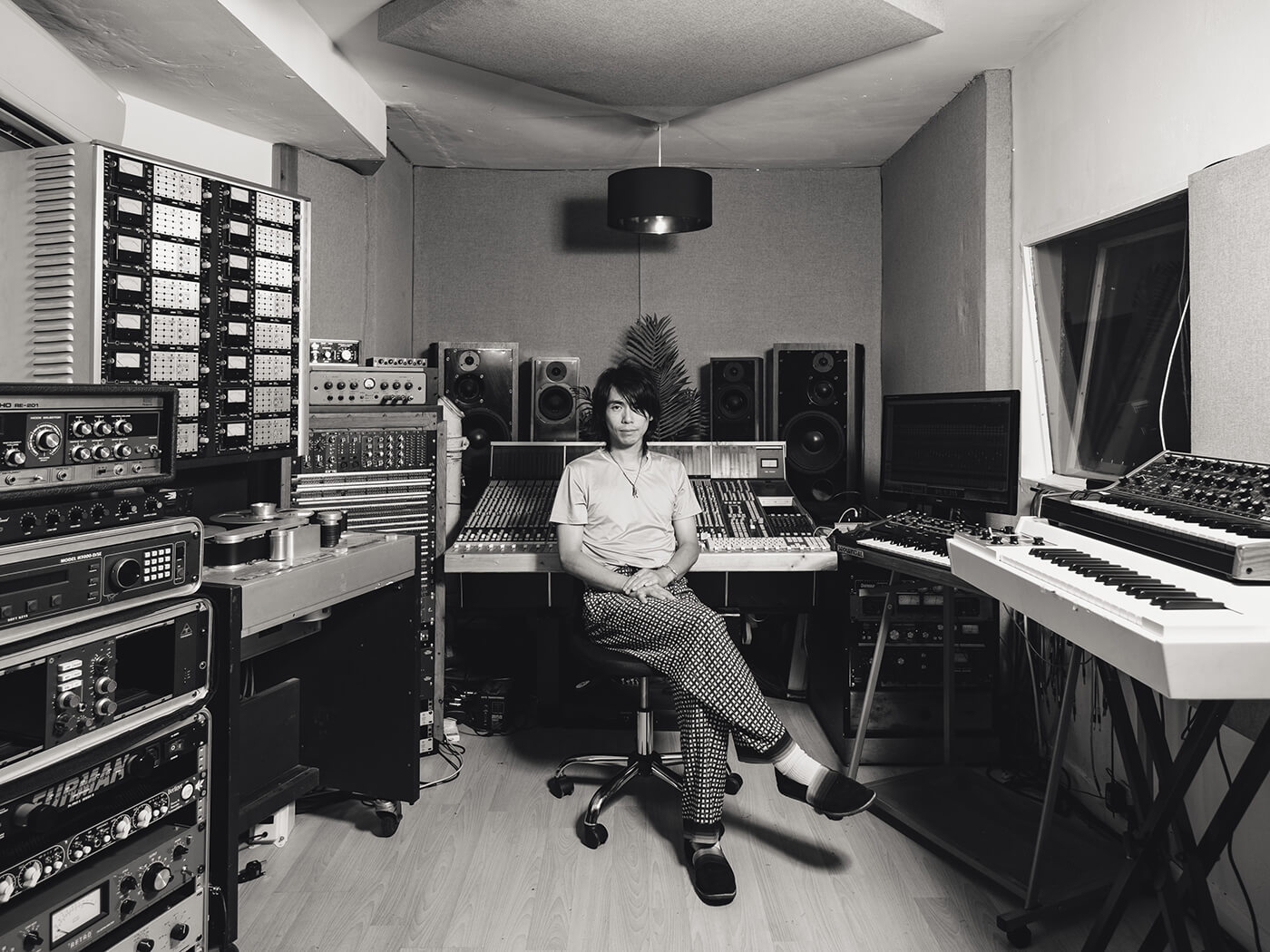 “I don’t want to record anything which sounds too normal, clean or pristine. Everyone else can do that. I like my records to sound dirtier and different.”

Audio engineer Shuta Shinoda is reflecting on his musical approach, how his ears are excited by mining for musical diamonds in the rough. His eclectic discography including forward-thinking, critically acclaimed albums from Savages’ Jehnny Beth and Ghostpoet. It reflects his love for recording the songs and sounds of unique artists operating in the shadows.

“I love working with artists who have a strong musical vision,” he explains.

“The relationship and connection with them really helps on a project. But I’m not a great communicator. Instead, I think being honest is key for me, so I get good people and great projects around me all the time.”

Tokyo to London and back again

Shuta’s success has been hard-won and achieved on his terms without any management or broader team. Working out of Hackney Road Studios, he’s been a regular attendee at London’s smaller venues over recent years, catching emerging bands on the up and building his reputation by connecting with them. This dedication has paid off; he’s a nominee in this year’s MPG Awards for the Breakthrough Engineer Award. Previously, he’s collected SAY Award and Mercury Prize nominations for albums with Anna Meredith and Ghostpoet. He’s come a long way since he first caught the bug for music back in his native Tokyo.

“Tokyo and London are very different when it comes to music and culture,” he laughs when talking of his decision to live in the UK. “In Japan, the underground music scene is much smaller, and it can be a struggle for artists. I love the vibe of London’s underground scene; it’s got so much more character.”

Landing in the capital city’s East End back in 1999, he studied audio at the SAE Institute, filling his world with art, colour and creativity.

“Back then, I was living in Brick Lane in Shoreditch, and it was a very inspiring environment to be in. It was that atmosphere and being around music people from my social circle which led me to the music business.”

After studying in London, he returned to his native Japan to cut his teeth in a studio. But the music wasn’t to his tastes, and he ended up returning to the UK, finding work with Primal Scream producer Brian O’Shaughnessy at his Bark Studio in North London. He did a stint at Bark before getting the opportunity to work out of the Hackney Road Studios. Shuta has been operating from there ever since.

“It’s a great space, and I keep all my personal gear there such as my Studer A80 2-inch, 16-track tape recorder, a lot of microphones and outboard gear, plus I have my own private room in a connected shed.”

Shuta’s knack for being at the right gig at the right time has helped him create a series of breakthrough moments. A chance meeting with Daughter’s management led to a collaboration with the indie outfit on their debut record If You Leave in 2013. The album was well-received and paved the way to creatively fertile recording sessions with Hot Chip, Anna Meredith and Ghostpoet.

Shuta has ploughed a particularly creative musical furrow with the last of these names. Ghostpoet, also known as Obaro Ejimiwe, is an alternative artist who blends musical leftfield and experimental sounds with his half-sung, sometimes spoken words. He’s a hard-to-pigeonhole creative, and one Shuta has forged a tightly knit bond with through albums such as 2015’s Shedding Skin and 2020’s I Grow Tired But I Dare Not Fall Asleep.

On this latest record, Obaro would bring Logic sessions with loops into the studio, then draft in drummers or guitarists to record various parts before sitting down and glueing the songs together with Shuta.

“We’d have a collection of interesting audio for each song based on the performances responding to these loops,” Shuta explains. “It was a new way of working, and finding and organising the parts was tricky. But ultimately, it’s a very unique-sounding record.”

Shuta’s album highlights include tracks such as Nowhere to Hide Now and When Mouths Collide.

“I felt the album needed some extra oomph, so I bought an Overstayer 8755DS from KMR Audio,” he reveals.

“This piece of gear was a secret weapon for the whole record. I used it extensively for the drums, bass, guitars, strings, literally everything where it worked. I sometimes printed some instruments with my manual automation. It helped achieve this dark but colourful sound for Nowhere to Hide Now.”

Elsewhere, Shuta included plenty of small sonic details to give the album its distinct flavour.

“On When Mouths Collide, there’s a tape delay on a snare, and we recorded piano onto a vintage Marantz cassette recorder to get this nice, soothing sound. This album also has plenty of bottom-end that you can hear only through big monitors or high-end headphones. I really hope people listen to its full range.”

One of the more unusual weapons in Shuta’s sonic armoury – especially for a modern studio – is his Studer A80 tape machine. After reading about it in a producer magazine and using one back in Tokyo, Shuta eventually managed to get his hands on one for himself.
“I was looking for an Ampex 1-inch 8ch or Studer A80 MK1, 2inch 16ch. I wasn’t really interested in 2-inch 24 ch or any other models,” he states.

“I just wanted the recording device with the strongest character, not convenience or versatility. I found the Fish Factory Studio was selling an A80, so I went to a bank, asked to borrow as much as possible and grabbed it straight away. I thought I could be the only engineer who could offer a proper analogue recording with the best recorder at a very affordable price in the middle of London.”

“My analogue gear has plenty of imperfections. That’s why I like working with it.”

His ambitions have since been realised, using this piece of vintage gear on recordings with Hot Chip’s A Bath Full of Ecstasy album and Spiritualized’s Jason Pierce.

“Hot Chip was the first big project I used it on, and I had to think about how to integrate the A80 with the SSL Room we have at Hackney Road Studios,” he says.

“But they loved it, and we recorded a bunch of instrumentation onto tape. I’ve also used it on Alexis Taylor’s new solo album due for release this summer. You can hear a bit of wobble in there, but we intentionally kept them to give it a subtle character. The album has quite a stripped back arrangement, but it’s got a full big sound.”

Shuta also worked with Jason Pierce from Spiritualized on The Prize, a standout track from his record, And Nothing Hurt.

“He wasn’t particularly looking for the tape sound,” says Shuta. “But I recorded it on the A80 as well as on Pro Tools, and he seemed to really like the analogue sound it offered.”

Shuta’s Hackney space is where he works as a freelance engineer. It features three spaces: an SSL room with a grand piano and drum kit, a Neve room equipped with Neve V66 desk and his own mixing space.

The Neve desk was built for BBC Bristol and has been specifically modified with the original 60 channels cut down to 24 inputs with mix minus for film mixing. It is at the cornerstone of Shuta’s sound and studio aesthetic but having a finite amount of gear also helps inform his process.

“Gear is obviously important, but just as important is knowing what it does and the best ways to use it. My studio isn’t overstocked with equipment so I know what everything does and how it can help. And the analogue gear I do have includes plenty of imperfections. That’s why I like working with it,” he explains.

His advice for working on sessions as an engineer is to get to grips with the studio space where you are recording and ensure any equipment is set up correctly.

“You’d be surprised how many drummers just don’t know how to tune their kit,” he says. “But doing this can be really beneficial for engineers. It means you should get a great sound, and people will come back to you for more.”

For mixing, Shuta advocates avoiding too many plug-ins to preserve the individuality of a recording.

“I’m always shocked when I see a Pro Tools project with three or four plug-ins on each channel. I try to avoid them unless I really have to,” he explains.

“I think good engineers capture great sound and energy in the studio. And the more you mess with this in the mixing stage, the more of this momentum you lose. I don’t want to distract from this with too many effects.”

“I’ve tried mixing in the box, but it doesn’t really work for me,” he continues. “Instead, I mix using analogue gear and I find it much more inspiring than just being faced with a list on a computer screen.”

Latest projects and the future

Steelpan legend Fimber Bravo and his recent album Lunar Tredd is one of the most recent of Shuta’s projects to see the light of day.

Recorded six years ago, it features an inspiring cast of characters, including drummer Leo Taylor, Zongamin and Alexis Taylor. It’s a record full of echo, delay and reverb as Fimber strived for a weirder sound.

“It was an unusual process and recording some instrumentation offers new challenges,” Shuta says.

“But if I don’t know the instrument very well, I’ll be really honest with the artist and ask for their help in terms of sound and mic positioning. There’s no shame in this. It makes things easier and the artist happier if we get great results.”

With future releases including a new Fimber Bravo remix of Django Django, an Alexis Taylor solo album and a new record by Red Snapper, Shuta’s workload is beginning to pick up with lockdown easing. He also has the MPG Awards to look forward to, where he’s shortlisted as Breakthrough Engineer. Three of the albums he’s worked on (Jehnny Beth’s To Live Is To Love, the latest Ghostpoet record and FIBS by Anna Meredith) are also nominated in the UK Album of the Year category.

“So far, these nominations have not had too much impact on me. We’re still in lockdown, but I hope in the future it means my comments in the studio will carry more weight, and I’ll be taken more seriously,” he says.

His recent achievements suggest we’ve only heard the opening chapter of Shuta’s talents. His pursuit of different, dirty sounds continues.