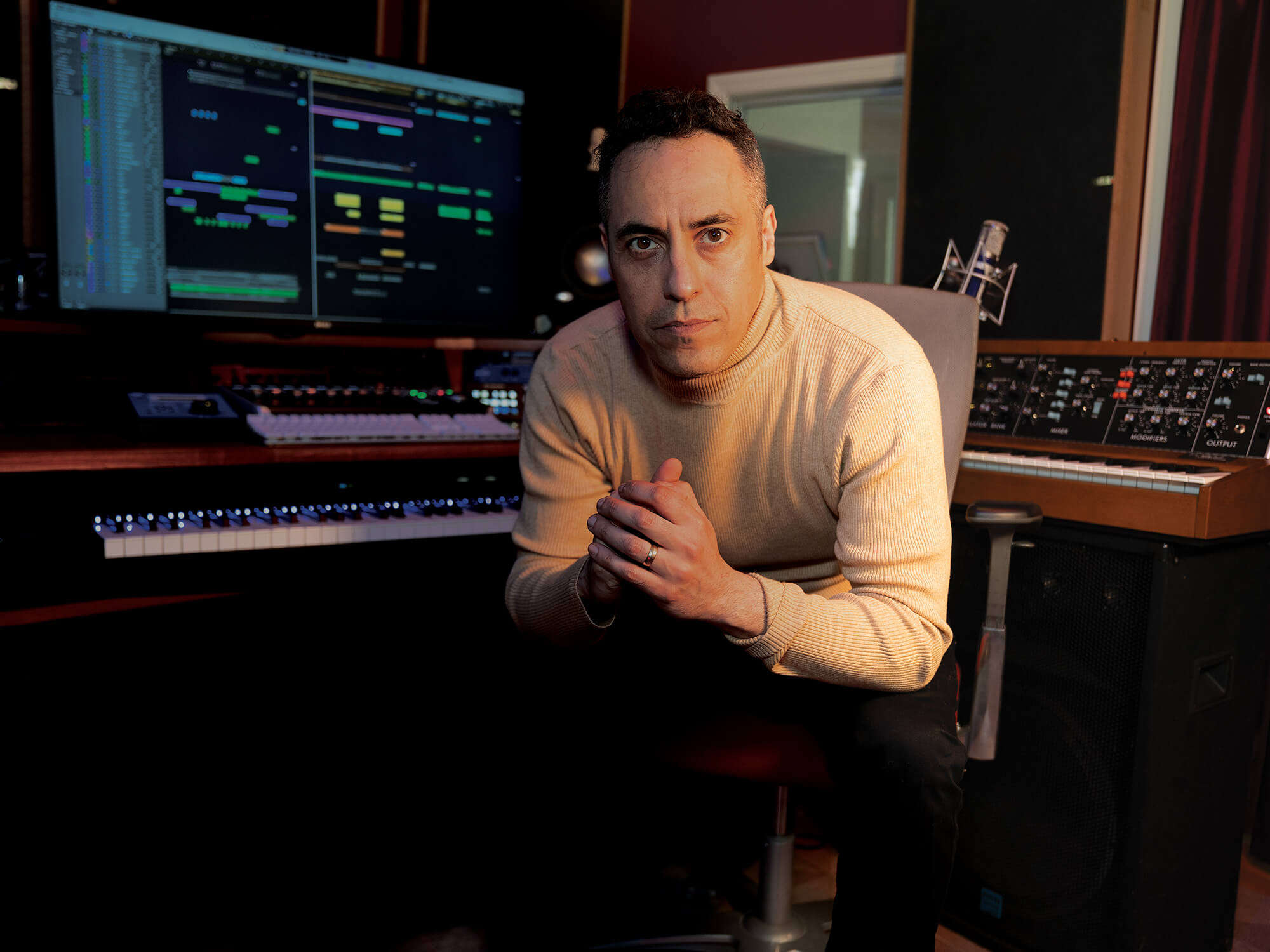 What would the classic 1993 time-loop comedy Groundhog Day look like if the whole world was trying to murder Bill Murray? That’s the crux of Deathloop, Arkane Studios’ GameSpot Game of the Year winner set in the late 1960s and rife with mystery, dark humour and action. “What kind of fucked up world is this!?“, screams the player-character, Colt, upon your first death. You’ll ask yourself the same question.

Award-winning Deathloop composer Tom Salta is familiar with such themes. The US musician also produced scores for other iconic titles such as Prince of Persia and Wolfenstein. But Deathloop presented unique new challenges. “Deathloop’s music and gameplay took a lot of risks,” he tells MusicTech. “It was not a straightforward, safe way to do a game. This is not a rinse-and-repeat, cookie-cutter experience. This is very, very different”.

Arkane’s first-person shooter has the player venturing through a time loop, repeating the same day of bloodshed and tracking down leads that will help them break the loop. The 20-hour story and endlessly playable multiplayer mode revolve around just four areas of Blackreef, the wretched island Colt has found himself on. You’ll visit these locations at different times in the day to hunt Julianna, the antagonist, and the seven Visionaries holding the loop together.

Tom and Arkane’s risks have paid off. Deathloop players adore its soundtrack and are sharing links to their various tracks on forums and reliving their favourite parts of the game through the music. Tom’s work earned the game a nomination for Best Score and Music at the prestigious Game Awards 2021, where it also won for Best Art Direction and Best Game Direction.

“It’s really gratifying,” Tom says of the overwhelming response to the game’s score. “I do what I do in general, whether it’s in video games, or records, to move people. And when I see people saying how much they liked it… you can’t ask for better than that. I don’t take it for granted.”

Video game music is inherently loop-based due to file size restrictions. Tom’s challenge was to ensure that players wouldn’t grow tired of revisiting these same four areas and hearing their accompanying scores again and again. “I was a little fearful that if [the score] wasn’t implemented right, it could get monotonous,” he says. “Fortunately, it didn’t. And the first step towards that success was coming up with a very repeatable motif.”

That four-chord motif can be heard in Deathloop’s main theme Welcome to Blackreef, which plays in the main menu screen and is repeated throughout the game. Mysterious and eerie, it perfectly embodies the 60s spy movie tone that Arkane set out to achieve. Tom builds on the theme throughout, adding variations and experimenting with arrangements to bring players back to familiar places without risk of them getting bored.

Creating a piece of video game music that is repeatable is tough. It can be infuriating to hear the same obnoxious tune every time you lose a life and restart a level. Tom credits Deathloop’s sound designers for their clever work on integrating the score.

“You can destroy a great score with bad implementation, and you can get a lot of mileage out of a mediocre score with fantastic implementation,” Tom says. “It’s often an overlooked element in the process. Implementation is taking the music files into the middleware and deciding what rules [the score] follows when it’s triggered by the needs of the game.” 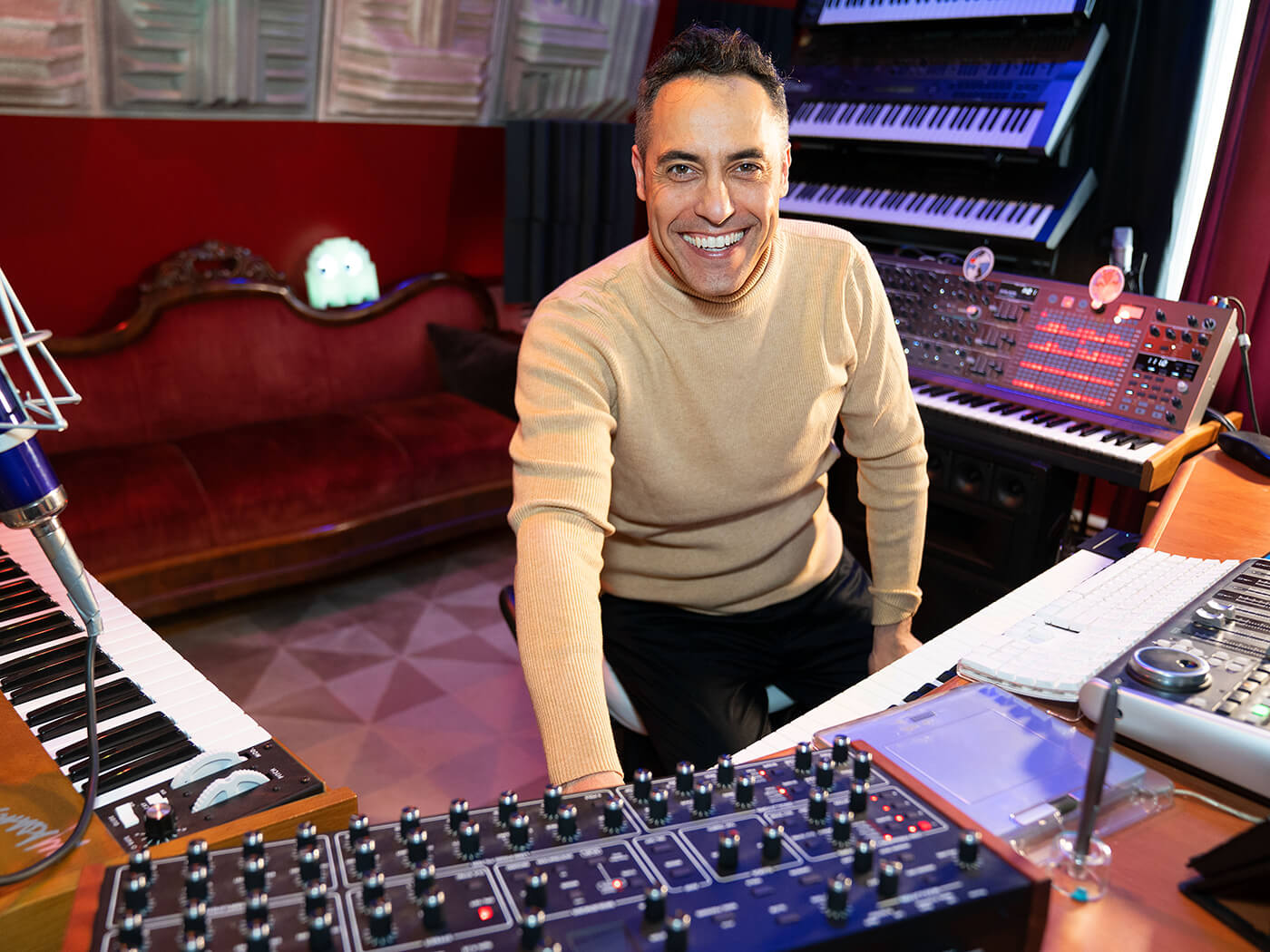 Tom’s main theme for Deathloop wasn’t a spontaneous spark of genius. He spent hours researching, experimenting and creating, trying to nail the brief he was given by Arkane – “mysterious from beginning to end and felt like Mystery Island,” he says. Tom tells us he was given 30 or 40 pieces of reference music and ended up creating a playlist with another 50 tracks to share with the studio. “Never have I done as comprehensive of a job at researching the late 60s musical scene that I have for my R&D stage of scoring Deathloop.” he says.

After his original main theme was approved by the studio, Tom started working on background music for Blackreef’s area of Updaam, where the story begins to truly unfold. “I started hearing some of the NPC’s dialogue. I started seeing some of the snarky comments, the tongue-in-cheek humour and the vibrant personality of the game. And I felt that the main theme just didn’t really tell the story. It didn’t set the stage for what you were going to experience. It also, quite frankly, didn’t have this ‘looping’ element in it.”

“So I wanted to try something in secret. I took about a week on the side without telling them and I came up with Welcome to Blackreef. And I sent it off. And I said, ‘Look, I know you already approved the theme. But the more I spend time with this game and the personality of the game, I feel this theme will work better as the main theme.”

Tom was right. After hearing the savage, dark humour coming from the Visionaries, and Colt and Julianna antagonising each other through a walkie-talkie (“And now you better learn to duck, you sanctimonious prick. Otherwise, Egor is gonna blow your fucking head off”), the musician knew he had more tinkering to do. “Thank God!” Tom says. “The old theme was cool, but it did not have that same personality. Now, the music is in lockstep with the personality of Deathloop.”

Tom restricted himself to using sounds only found from 1968 to 1971 in an effort to stay authentic to the era of Deathloop. As you traverse Blackreef, you’ll hear the faint whistling of a theremin, the jazzy bellows of saxophones and horns, sustained pads of rich vintage synths, and fuzzy, eerie pedal tones.

This expansive palette of sounds comes courtesy of real instruments and plug-in emulations, from a theremin app to a 1971 Moog Minimoog Model D – which was on the borderline. Arturia’s V Collection gave him access to studio legends such as the loop-based Mellotron, Farfisa, Hammond B3s, Wurlitzers, and more.

Once he’d found inspiration through these hippie-era sounds, Tom dived into Logic Pro to apply 60s-style effects and find ways to apply them to a 21st-century video game. “One of my favourite sounds involved using a clavinet virtual instrument in Logic, tweaking it, and then throwing it through a lot of cool late 60s effects – certain kinds of spring reverbs and plate reverbs that were available in the day. And then sometimes I would cheat a little bit to, you know, give it a little modern boost. But, you know, it still comes across as the authentic item.”

The main theme has its sonic secrets, too. Although the main melody sounds like it’s played by a guitar, it’s actually the virtual clavinet fed through distortions and cabinet simulations.

“I take a lot of time to geek out on the authenticity factor,” Tom adds. “It helps me narrow the playing field, the choices that I can make instrumentally, and it helps me set boundaries. It kind of makes it more fun and spurs on more creativity. That’s where the foundation of the score comes from – reference music and limiting myself to sound sources, technology and effects.” 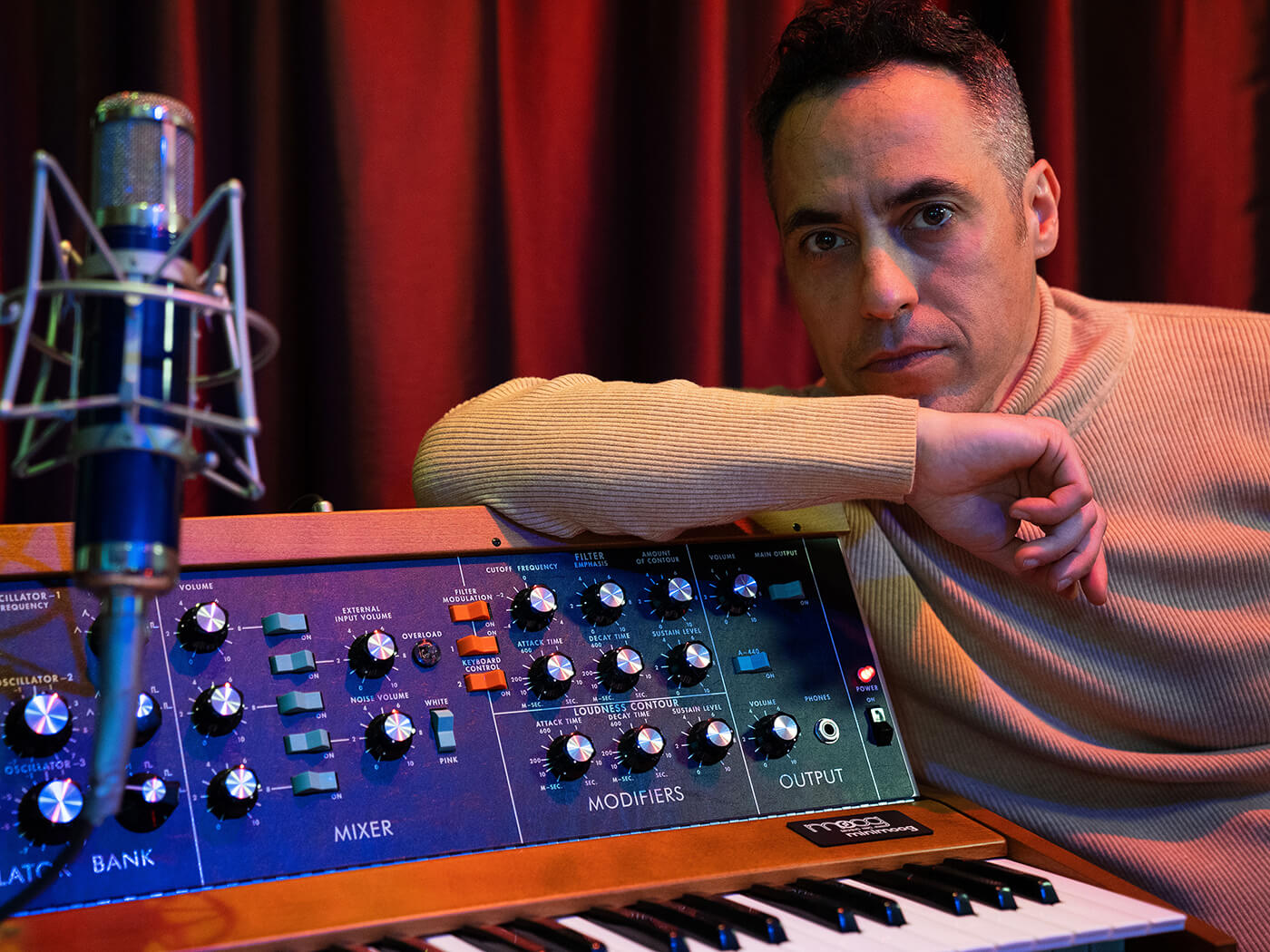 Tom’s expertise has come from almost two decades of video game composition backed by his prior work on music by Mary J Blige, Peter Gabriel, Junior Vasquez and more. Now, he wants to share his knowledge with aspiring producers and composers. “I have a lot of advice for people wanting to get into games,” he tells us. “I’d say to anyone out there, pay attention and learn from the people who are doing it.”

Tom has created a seven-hour masterclass on creating music for video games, with one specifically for Deathloop. The virtual workshop follows Tom’s entire process, including working to brief documentation, how to listen to reference material and more. He also breaks down pieces from the Deathloop soundtrack.

“That’s what I do,” he says. “I love to teach and share.” With his impressive portfolio and passion for teaching the next generation, Tom’s leaving a legacy for the gaming world. Particularly with Deathloop, as its active fanbase remains hungry for a new journey into Blackreef as a DLC. Striking the balance of Deathloop’s brutal gameplay, dark banter and mind-bending plot was no easy task for Arkane or Tom, but its success has certainly left an imprint on plenty of gamers.

“Deathloop was certainly a lot of work in finding that unique recipe. It worked out, I think. Mission accomplished. I hope if anyone closes their eyes and listens to 10 seconds of one of the pieces of the score, they’ll know what game it’s from.”

For $100 off Scoring AAA Deathloop Edition, use code: MTech-deathloop. For $30 off Game Music Essentials, use code: Mtech-GME. Find out more at tomsalta.com