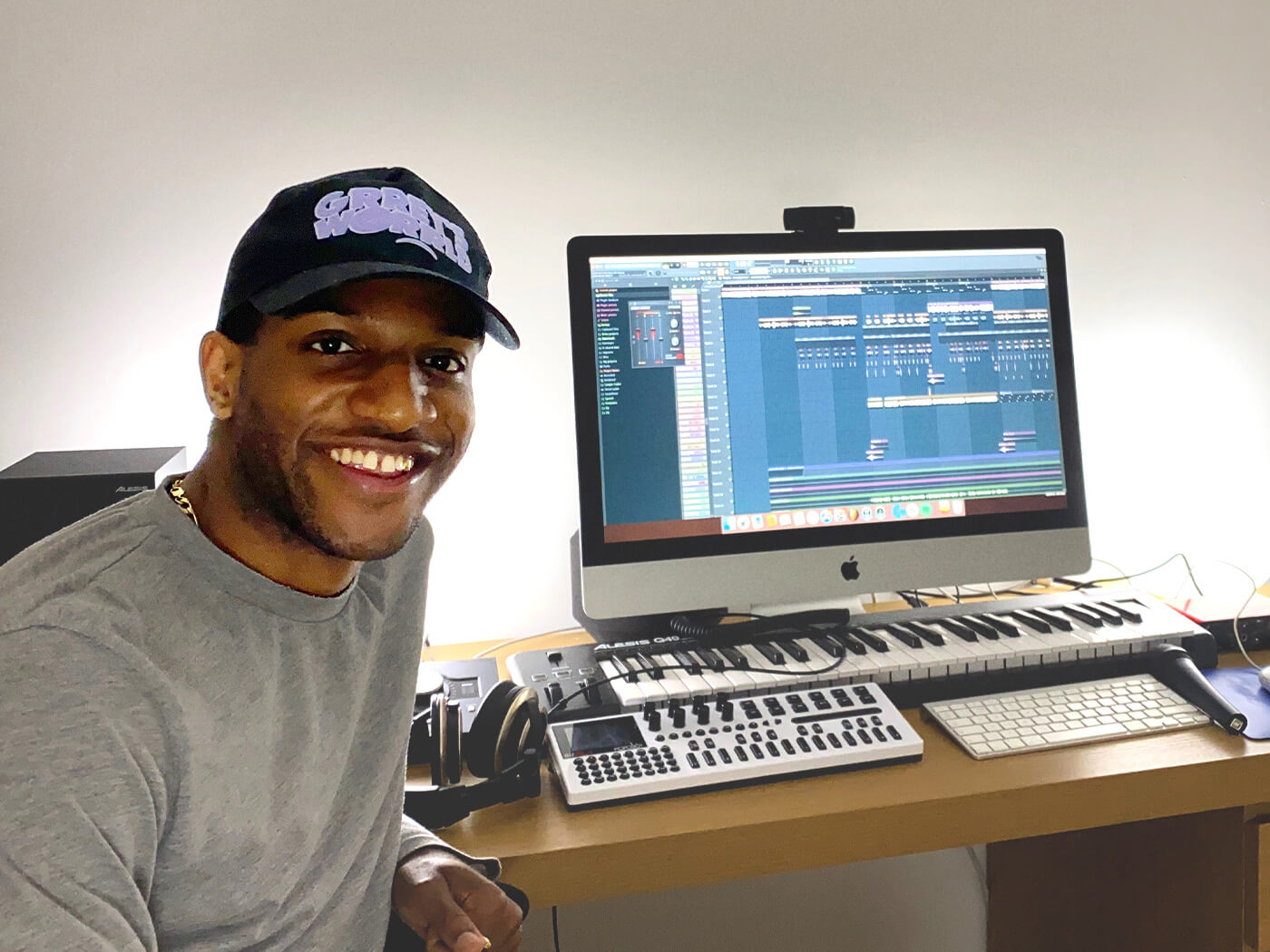 By creating a hub through label Kiwi Rekords, the 27-year-old Bristolian showcases and supports artists falling under a vast umbrella of UK garage with varied, global influences and advanced studio techniques only possible with today’s tools – a world away from the formative years of the genre.

Happy to take the crown as the new king of UKG, Conducta wants to create a new ecosystem and community for the genre. But doing that takes more than establishing an award-winning label for fans and producers to thrive. It comes from having a sage understanding of the genre’s past, present and future – what’s happening now and how he can help nudge garage in a vibrant new direction.

As a producer, Conducta shows eager followers the surprisingly broad horizons of UKG. Remixing Sean Paul and Jorja Smith, his productions ooze colourful, playful character, bouncing beats and groove, able to either fill a dancefloor or top charts and playlists.

Talking to MusicTech over Zoom from his studio, Conducta animatedly enthuses about garage’s boundless opportunities, excitedly discussing a genre he loves. However, another, more aching topic is that of lockdown; he’s stayed sane with regular live-streamed DJ sets. He’s also treating this time as a rare chance to assess and rearrange his processes in the studio.

“I’m just trying to make the most of a very, very bad situation,” he tells us. “It could be worse. I’m still here.”

“In terms of how it’s affected production and creativity, I feel like for the first few months of lockdown, it was easier making music. You could just come up with ideas, sit down and hammer stuff out.

“As the months have gone on, I’m feeling fatigued from what’s going on and not actually being able to be in a club and experience new music live.”

Making club music can take its toll when there’ve been no clubs in over a year, it seems.

“The best thing,” he says positively, DJ Mag award and magazine cover proudly on the shelf behind him, “is trying to find new ways of getting inspiration, trying to create and change my process and not be stuck in one way. It’s been cool testing things out, like playing with MIDI and microphones and trying to experiment.” 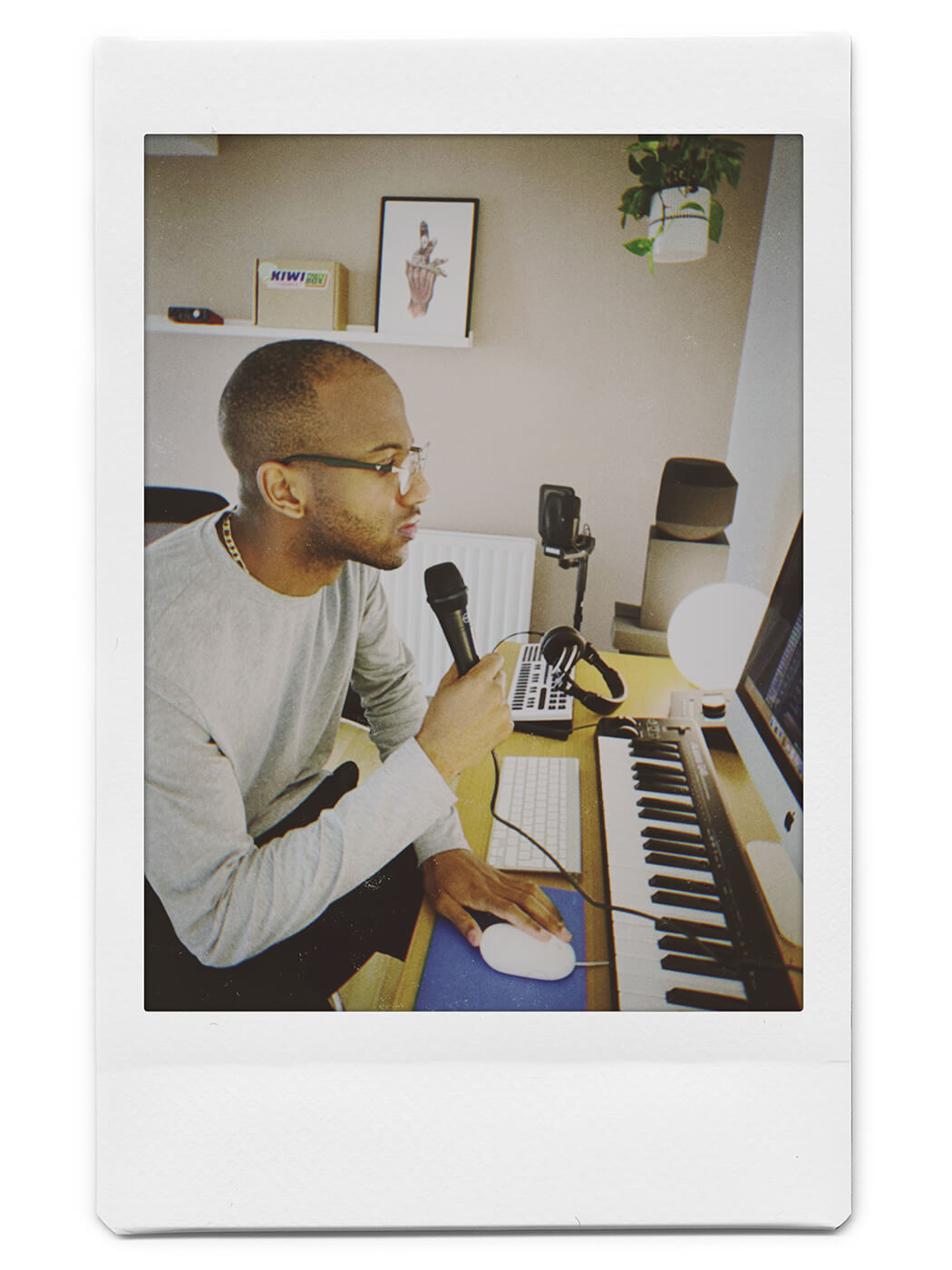 A significant way of dismantling and evaluating his previous studio habits and routines was by picking up a few new bits of kit, one of which is the intriguing Vochlea Dubler microphone. This translates hummed melodies or even beatboxing into MIDI data, letting you quickly capture and develop ideas before they’re forgotten.

“I’ll have a music dream, and I’ve got voice notes of melodies I’ve got and tried to remember. This is perfect because you just hum it in,” he says. “You have to do a bit of adjusting, but it’s great to build songs and build chord progression.”

“It almost seems too good to be true!” he laughs. “It’s taken some time to get used to it, but it’s so sick.”

Not only does it make it easier to get those one-time melodies that pop into your head onto the screen, but it can also give producers a chance to sit back and let their ideas flow freely. That’s a stark contrast to being hunched over, punching commands into a keyboard, in the same way, every time.

“In lockdown, I felt like I wanted to fall into new patterns or have a new way of working. The Dubler Kit has helped with that, for sure,” Conducta says. “I feel the process now is a bit more relaxed. I’m not staring into my screen trying to drag and drop in melodies. I have more creative freedom.”

Dubler has also given the producer the freedom to go back to unfinished projects without that feeling of dread, just adding in melodies and finishing them off with a refreshed sense of creativity. 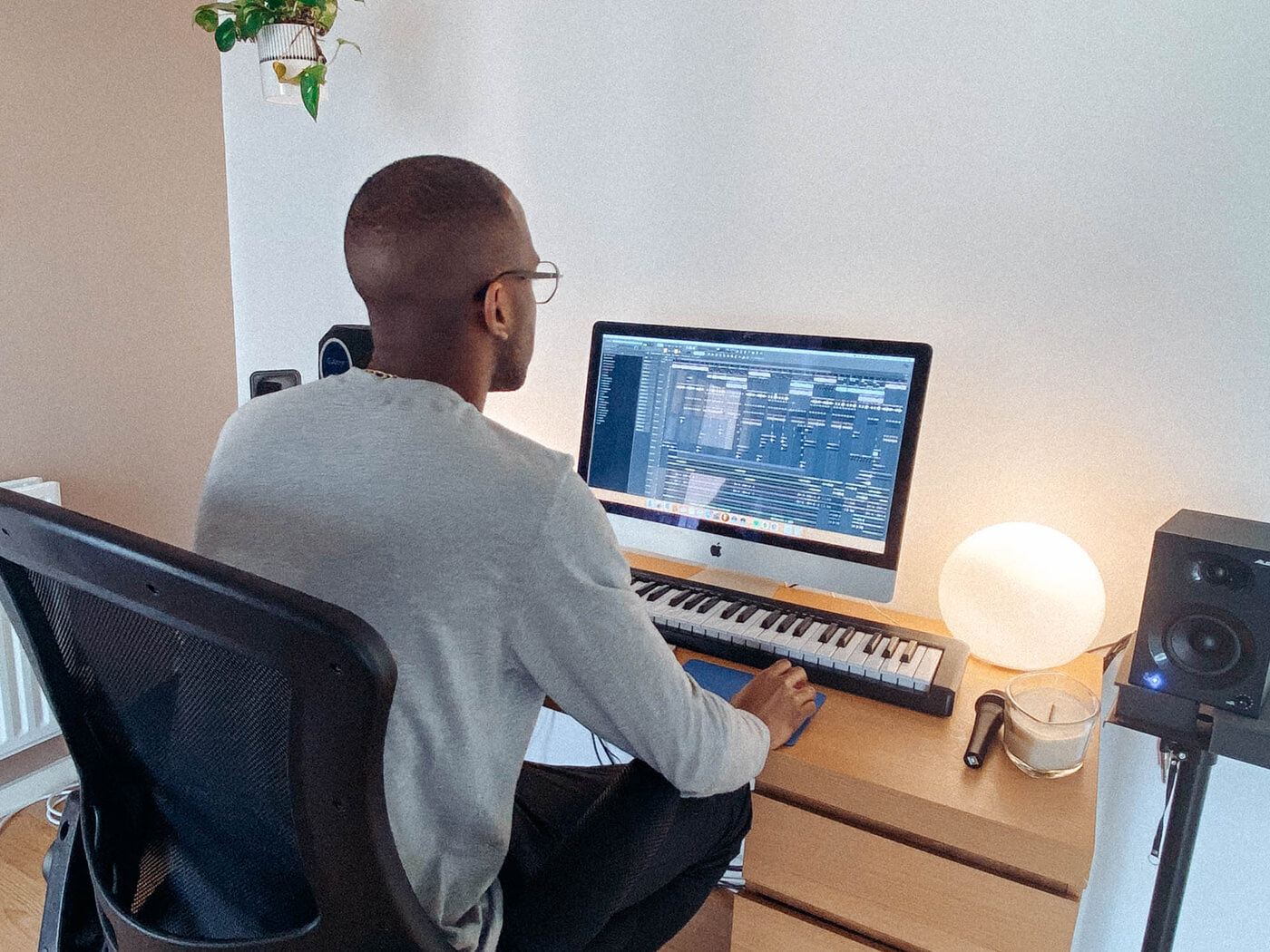 For Conducta, the melody influences the groove, and that influences the beat. You can hear how all of his tracks a melody-centric in Steezing (ft. Coco & J’Danna) and Not Enough. He can create catchy, radio-friendly anthems as opposed to club bangers.

Conducta is a mainly software-reliant producer, so when it comes to hardware, he wants MIDI controllers that can help him in the studio rather than just take up his time. While Dubler makes it easy to instantly bring an idea to life, the KordBot, built by Isla Instruments, helps him keep momentum.

The KordBot is a MIDI controller that nudges producers in the right direction for chord progressions. With an extensive bank of thousands of chords, KordBot suggests the next possible chord to go for by lighting up specific keys or whole chords.

For Conducta, who wants to turn ideas into tracks as quickly as possible, it’s the perfect studio tool.

Although he’s acquired these useful bits of hardware, there’s one thing that’s never changed: Conducta’s DAW. He’s an FL Studio devotee, being “13 or 14 years deep in our relationship”, as he puts it. When he’s not using Logic to record in-studio sessions with artists like JGrrey, Liv Dawson or Mina Rose, he’ll always make beats in the persistently popular FL.

“The first version of FL studio I had was version six or seven,” he says. “It was easy to make grime instrumentals and hip-hop instrumentals and experiment with dubstep stuff. As I was getting older and watching tutorials, a lot of hip-hop and rap producers were using FL studio, even a lot of dance producers were using FL studio. It was quite reassuring to say, ‘oh cool, if someone can make this from that, I’m not going to deviate.’”

Conducta’s recent smash-hit track, Time, featuring singer JGrrey, showcases his ability to focus his production around a catchy melody alongside fitting vocals and distinct groove while creating a bumping beat underneath. Not only is it a head-bopping tune to remember, its memorable video, directed by Elliot Simpson, reflects the song’s theme of stopping in time – something it feels like we’ve all done over the last year.

He explains how for Time he stripped all the elements back, re-assessed them and began treating his production around the vocals as if it was a remix for another artist – this wholly transformed the product from its origin.

“The process of that was quite interesting. Me and JGrrey had a session, but the song we made at the time was completely different.”

“I love remixing,” He says. “I had the vocal and was messing around with chords to see what goes with it; I isolated everything else and did this new chord progression. I did the same chords over all the tune, then changed it at particular parts, then added drums, and I was like, ‘yeah, this runs.’”

“I built it from an acoustic version backwards. The original version of the tune was a completely different song. It was 4/4 and maybe 110bpm, and now it’s 134.”

“You get goosebumps when you can deconstruct something and make it back into something completely different,” he says proudly.

You can’t truly get the flavour of garage without being aware of past practices.

With UKG enjoying its first run of popularity in the 90s, it’s evident that part of Conducta’s success is his awareness of traditions rooted in the genre. While the producer is a modern-day garage legend in the making, he’s had the opportunity to work with and take inspiration from the forefathers of the genre like Tuff Jam, Wookie and MJ Cole.

“MJ Cole’s melodies and drums are on point,” he starts, “and Wookie’s basses are gritty and dark. With Tuff Jam and Matt Jam Lamont, it’s all about the groove.”

Seeing garage pioneer MJ Cole working in the studio using the limited technology of the 90s and early 2000s, Conducta was driven to bring this old-school authenticity to his own productions.

“When I was with MJ Cole,” he says, “the thing that has shaped the whole process of my songs is recording slower and speeding things back up to give it a more organic groove. That’s why a lot of classic remixes sound great because they’ve obviously been a 90 bpm R&B tune, and when it’s sped up, it doesn’t lose its groove or lose its flavour, but if it’s recorded at speed, it can lose it.”

He goes on to mention classes run by the likes of Zinc and El-B, showing how even without complex equipment they still achieve a refined sound. So, inspired by this, Conducta strives to make great music even with the most basic of hardware. 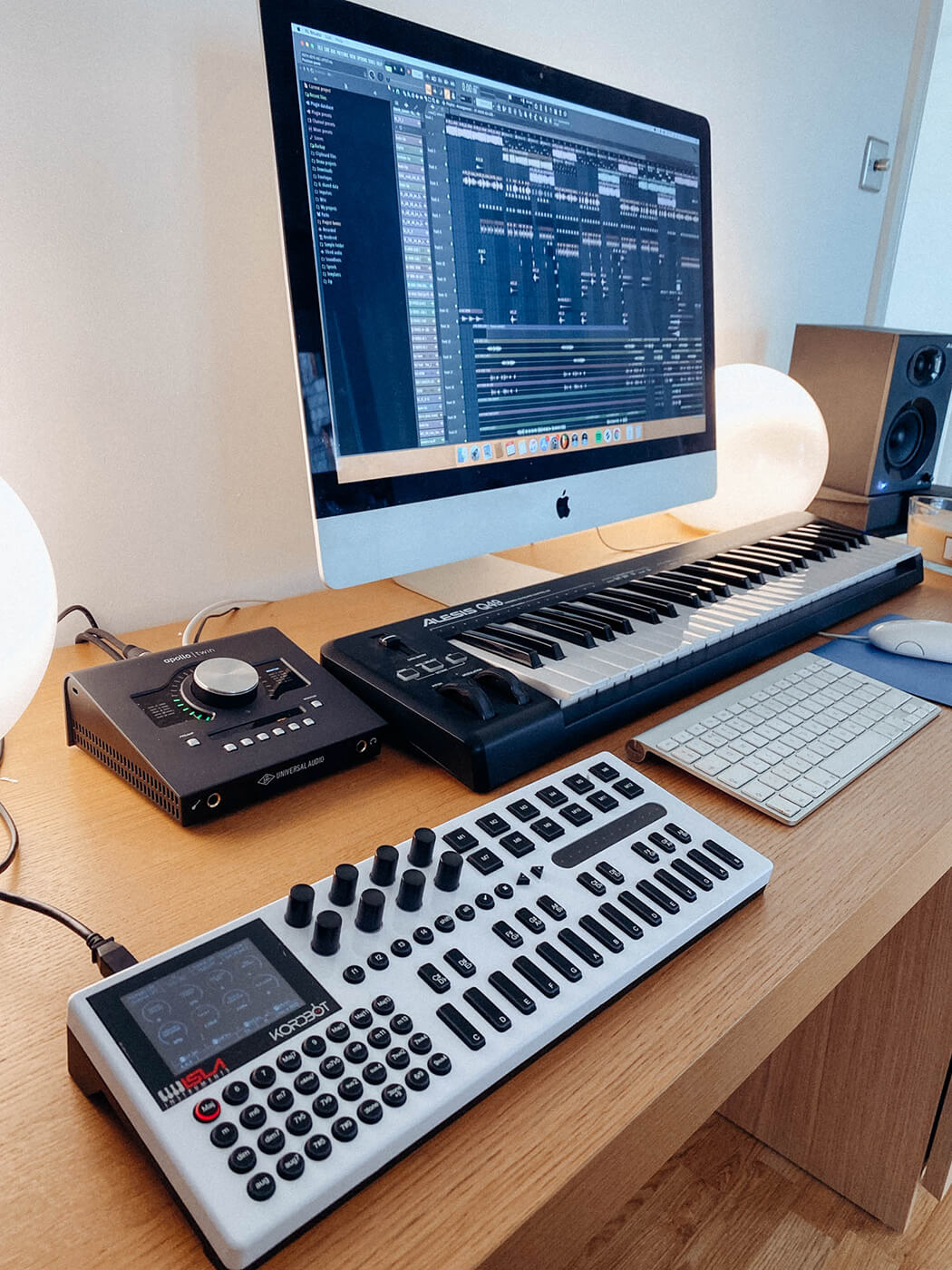 The Contemporary Sound of Garage

Garage music has evolved since the early days, celebrated by Kurupt FM, where it was all about expensive vinyl records and pirate radio. With the help of the genre’s leading man, it’s evolved into its own style via new studio technology, greater connectivity, and a generationally different perspective.

Conducta discusses the differences today. “Now it’s a lot cleaner,” He says. “It must be great being an upcoming producer now because you get such a wide set of resources of how to get stuff sounding super pristine.

“There are so many genres and different elements of music that are popping, you can have different influences, whether it’s drill, UK rap or even K-pop. There are lots of different elements you can bring in and put into a garage template. You’ve got producers that are keeping that older sound alive and now you’ve got people taking inspiration from bass house, Chicago house, approaching from a garage template and that’s what so great and beautiful about the new sound. That’s why we’ll always be more sustainable and explode more. You’ve got so many takes on what garage means to people whereas I feel like before there weren’t as many takes on how garage could sound.”

A true modern-day leader of UKG and a master of his craft, Conducta has learnt from the best and applies what he’s learnt to his approach in his own studio. And, with the recent help of streamlining his studio processes, he’s only beginning to discover his potential impact on music. This is not the end for Conducta or, indeed, UK garage.

Conducta’s new track 4-4-2 with Keeya Keys is out now on Kiwi Rekords.