Interview: Alice Ivy on her production process and debut album

Fusing live instrumentation with electronic beats, samples and a keen mastery of DAW-based live arranging, Australia-born producer/artist Alice Ivy is one of the industry’s most exciting new talents. Following the release of her debut album ‘I’m Dreaming’ last year, we caught up with her as she crafts her second LP… 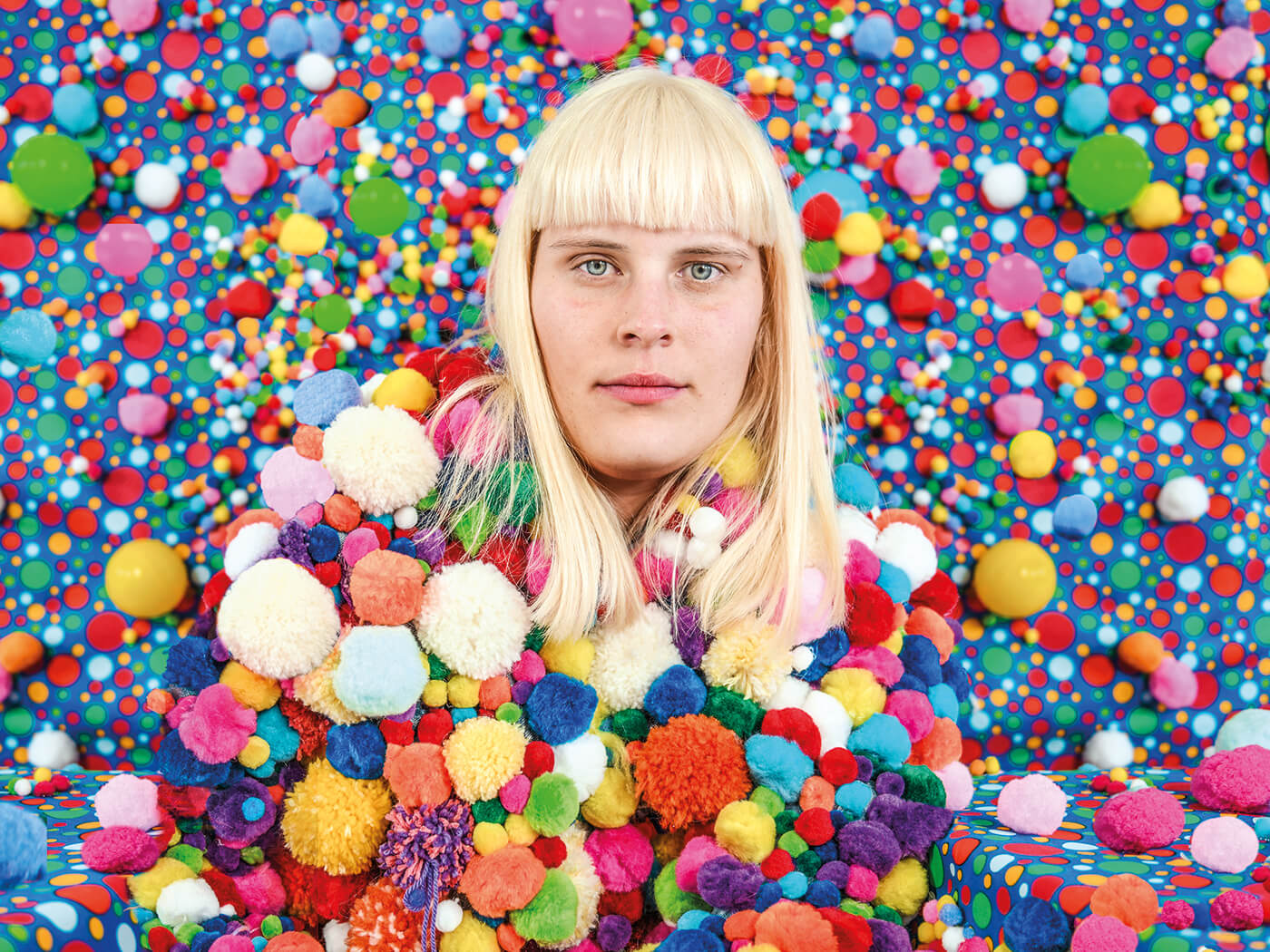 Many armchair music critics espouse the myth that the era of the live show is over, and that truly mesmeric live experiences are a thing of the past. However, captivating and engaging artists such as 25-year-old Alice Ivy decimate that notion entirely. Alice’s dynamic, intense performances and her beguiling artist persona, combined with a relentless touring schedule, all place the stage front and centre.

Born in Australia and diving into a deep love of music following the discovery of the guitar, Alice played in several bands throughout her teens before mastering the art of software-based production (particularly with Ableton Live) and evolving into a unique electronic musician.

Alice’s career really kicked into gear once she decided to become a solo artist. She combined her guitar-playing ability with her developing love of sampling and in-the-box beatmaking; Alice’s profile started to grow and a few EPs followed before the long-awaited release of her debut album I’m Dreaming last year, to much critical acclaim.

Alice’s live performances started to become increasingly more aurally and visually astonishing. Alice herself states that at one of her shows: “The music doesn’t stop” and that conventional gaps between songs are filled with interesting segues, linking samples or melodies and other sonically connnective elements.

The same can be said of her debut album, which Alice intended to be listened to as a whole, inspired by classic concept albums. Alice’s career continues to go from strength to strength, so we caught up with her during a gap in her hectic schedule, to discover more about what motivates this fascinating artist.

How did your music-making journey begin? And who are your major influences?

My musical journey began when my uncle taught me how to play Smoke On The Water on the guitar one afternoon when I was 10 years old – how typical, right? He went on to teach me how to record it on Pro Tools and how to then add bass, drums and vocals. I walked away with a CD of the version we’d recorded. From that point on, I played guitar near-constantly and, eventually, I auditioned for and joined a 25-piece all-girl soul band who played Motown covers.

After graduating high school, I studied music at university, where I was introduced to music production in Ableton Live. I became pretty much obsessed with it and spent hours and hours in my bedroom making beats and mixing. I grew up playing soul and Motown, so my influences back then were the greats; Marvin Gaye, Curtis Mayfield, Diana Ross and The Supremes. Today, my biggest influences are Bonobo, Flying Lotus, Tourist and The Avalanches.

How does a typical track begin for you? With samples, melody and rhythm, or with a broader idea for the track’s sound?

I usually start with a sample that I love. I build some chords around it, work on different textures that fit nicely around the structure to create a colourful wall of sound, and then I program a beat. Then I approach a melody, vocals and lyrics myself or in collaboration with another vocalist. It all just depends on how I’m feeling!

Do you prefer songwriting/composing or producing – or do you see these processes as one and the same?

I more-or-less see songwriting, composing and producing as the same thing. The way you produce a track can definitely influence the way the song is structured – and it’s a strength to be open-minded when approaching all of these things.

What gear is the cornerstone of your setup and do you prefer to work in-the-box or with instruments?

Ableton Live is the real cornerstone of my setup. Since a lot of my work is sampling, I’ve found a comfortable way of approaching it in-the-box. Sometimes, I’ll jump onto the MPC and cut up a beat, but I’m of the opinion that the sampling in-the-box approach is far quicker.

I work pretty evenly between Ableton and a bunch of other hardware. I usually turn to the MS-20, Korg Minilogue, a Prophet 12 and a JU-06 for chords/bass and leads. Guitar is usually the last thing I add to a song, aside from vocals.

How long did the process take to record I’m Dreaming? And how would you describe the album?

I’m Dreaming was recorded over a period of two years. It spans from songs I wrote when I first started producing, mainly sampling, to when I began to write a lot on hardware. I’m Dreaming is the story of my first two years as a songwriter and producer. I would describe my first album as young, lighthearted and colourful.

How do your compositions change when performed live? What gear do you use in live performance?

Transitioning my music from the studio to the stage is the best part. Performing live is one of my strengths, I try my best to keep it as visual as possible, I don’t want to hide behind a wall of hardware or decks. All of my stems are looped in Ableton, which I trigger with an APC40. This is amazing, because I can easily extend or cut sections of a song very easily.

This is super-handy when you’re playing club shows: I’ll extend the dancier stuff if people are having a good time. I use a Roland SPD-S to hit drum and radio samples and play most of the synth parts live on a Fender Telecaster. I also tour with another guitarist, as well as a vocalist or rapper. It’s a flexible setup which is also really virtuous.

Do you have a track that you’re most proud of?

Chasing Stars is the song I’m the most proud of that’s been released so far. Working with Australian vocalist Bertie Blackman on that was a dream come true for me. The song was written over a long period of time and finally morphed into the version you can hear today. Sometimes, it can be good to let a song rest: as I was growing as a producer, my ears were maturing, too.

You’ve recently created some sample packs for Ableton, how did that relationship come about and can you explain what types of samples you’ve crafted?

I played at a club night called Low End Theory in LA a couple of years back and an Ableton rep approached me afterwards. We ended up having a long chat about some of the opportunities they can provide to producers like myself.

That relationship has grown since then and I’ve become close with their Australian rep as well. She’s been championing my music within the organisation and they recently reached out for a feature. The sample pack I created for them is a collection of sounds I’ve put together in recent times, from travelling through Japan to sounds off my own hardware.

Do you have your own home studio, or do you work/record in a different place?

I have a home studio and a work studio! I do most of my sessions and recording at my studio space in Brunswick, in Melbourne’s North. But I like to do a lot of editing at home. It’s nice to have an extra space dedicated to creative stuff. At home, I usually do all of the catch-up work.

Do you prefer composing alone or with other people?

Both! I prefer to get the bare bones of a beat together by myself. Then I love to bring it to another artist to collaborate on. Collaborating is the best thing, you can learn so much and usually walk away with a new songwriting trick every time. It’s definitely the quickest way of getting better at songwriting! Then I like to finish the song off by myself.

What tech do you want to get your hands on, or like to have in your setup?

I’m going to be honest, the thing that I need the most right now is a new computer to act as my central hub. But a Mellotron M4000D and a Moog Sub 37 would be a very nice addition to my studio setup.

Is there anyone out there that you’d like to work with in the future?

My dream collaborators would be Frank Ocean, Nai Palm from Hiatus Kaiyote, Anderson Paak, Little Dragon. I literally found out a few of days ago that I’m going to be working with a dream mixing engineer on my album, but I can’t reveal too much about that yet!

What are your thoughts on the music industry right now? And what advice would you give to anyone looking to have a career like yours?

It’s a super-exciting time to be making music, but I try to keep my head above the water when it comes to the music industry. My advice to anyone looking to have a career in music is to just focus on being as creative as possible and be patient, but also support other local artists in your world, go to shows and allow yourself to be inspired.

When can we hear the next album?

I’m just about to start the mixing process for my second record! Stay tuned…