Catherine J Marks is among the studio world’s rising stars and recently picked up Best Producer in the prestigious MPG Awards 2018. Here, she details her transition from an unlikely background to the forefront of studio production… 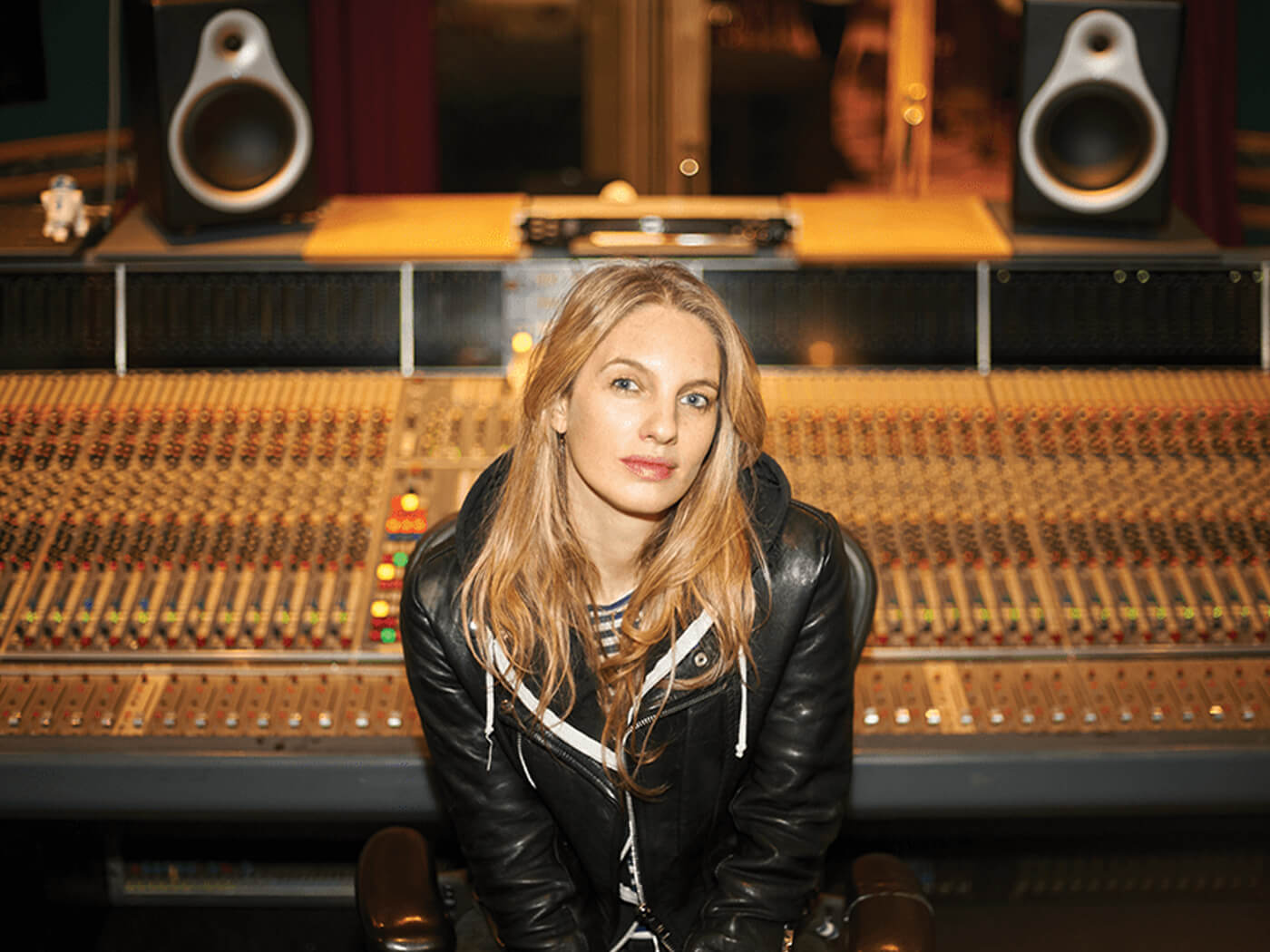 Over the years, we’ve written a huge number of features here at MusicTech offering advice on how to become a top record producer or engineer. You should now know that the big tickboxes include the technical know-how, the ear for detail and the willingness to grab lunch when required as you work your way up from the bottom in a recording studio.

We hope you know those bits, and then we always throw in the ‘network, network, network’ line, which is probably the key point. Then there’s ‘get to know people and get on with people’ – or more simply put: people like working with people who they like.

You might be the most highly qualified engineer on the planet, with an inside knowledge of Pro Tools that’s second-to-none, but if you don’t gel with the person above you, you’ll never get to learn from them – and learning, gaining experience and gaining trust are the keys.

Australian-born, London-based Catherine J Marks is one of this year’s go-to producers. Winner of the Best Producer award at this year’s MPG Awards, she has production, mixing and engineering credits for a huge number of varied artists, including Wolf Alice, Foals, PJ Harvey, Kanye West, Ian Brown, MIA, Placebo, Ride, The Killers and Mr Hudson.

She’s the producer who took the ‘network, network, network’ advice to another level – a lesson to us all – even though at school, despite wanting to work in music, she was led towards another career.

“No one told you how and ended up pushing you to more conventional ideas,” she explains of how, post-school, she started studying Architecture. Fortunately, she was dragged back to the dream with one chance, destiny-shaking meeting and she grabbed that opportunity to change careers and change her life with both hands…

“I was studying Architecture and I did a year out in Dublin as part of the course,” Catherine explains, “and that’s where I met [legendary U2, Sigur Rós, Depeche Mode and PJ Harvey producer] Flood, randomly, at a Nick Cave concert.

“I didn’t really know who he was, but I got to know him and a few other people who were hanging out at the time and, by the end of the year, had decided that I’d really like to do something like that. He was like: ‘If that’s the case, go off and finish your degree and try out loads of different things; go and join bands, write music, see what it is that you want to do in the industry, because with what I do, essentially, your life will be over once you start!’ And he was bang on about that…

“I was impressed by the stuff he [Flood] had done, but I didn’t understand how significant he was until I went back to Australia and people said: ‘Oh my god, I can’t believe you met Flood!’,” Catherine laughs. “I joined a couple of bands and wrote songs for people. I started going to more gigs and met people with their own studios, or who were engineers. I didn’t know much back then, so discovering reverb was like the best thing ever!” 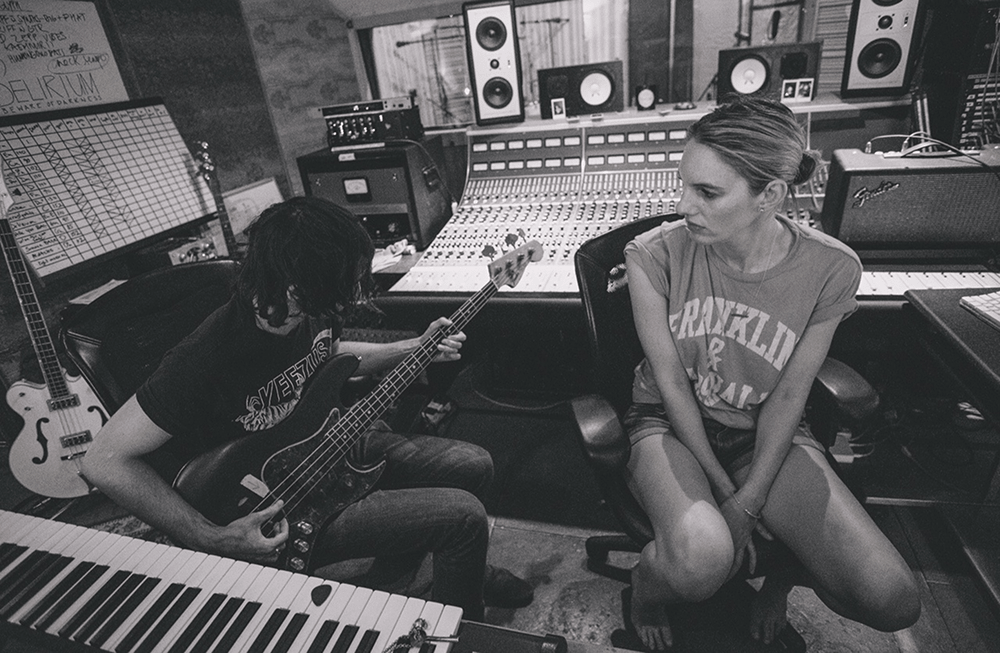 In 2005, Catherine became Flood’s assistant’s assistant – starting out at very much the bottom rung of the studio ladder, as the runner in his studio.

“I literally knew nothing about sound engineering, so I was learning as I went along and being thrown in at the deep end,” she recalls. “Flood gave me the keys to one of his studios at the time and said ‘good luck.’ It was such a mess, I just kind of taught myself by plugging and unplugging things and reading about it. I can’t believe I did that now, it was just so intriguing.

“He had a massive modular Roland System 700 synth and a really easy-to-read manual, so I taught myself how to use it. So when bands came in and said: ‘Does anyone know how to use this?’, I said: ‘It just so happens that I do’. So, little by little, things became clearer. I do think going on a course is really helpful to give you a technical understanding, because I didn’t, but I was really excited and enthusiastic about it.”

Catherine’s original plan was to try studio work for six months, but after three, she was hooked – so decided to get as much experience as possible. “I became a good assistant when I started doing bits of engineering, because then I could understand what was required of an assistant. It was hard, though.”

All the time, Catherine has returned to that advice of networking and just getting on with people. After Flood and Ben Hillier, Catherine then worked with Alan Moulder, very much a producer who would offer another educational perspective.

“Alan thought, and probably rightly, that I didn’t have enough training,” she says. “So he took me on as his assistant and had me mixing on smaller projects that he wanted to still be involved in. It was like having my homework marked, which was great! Then, through that, people asked me to mix some projects and then with the Foals project Holy Fire, I was like: ‘Please let me engineer it!’ and was chosen to do it. I was quite nervous asking Flood and Alan questions, but after two weeks, I said: ‘Can I just take over?’ and they were like: ‘Great!’. It was a band I loved, with two producers who had been my mentors as well.”

Awards: The good, the bad and the trophy 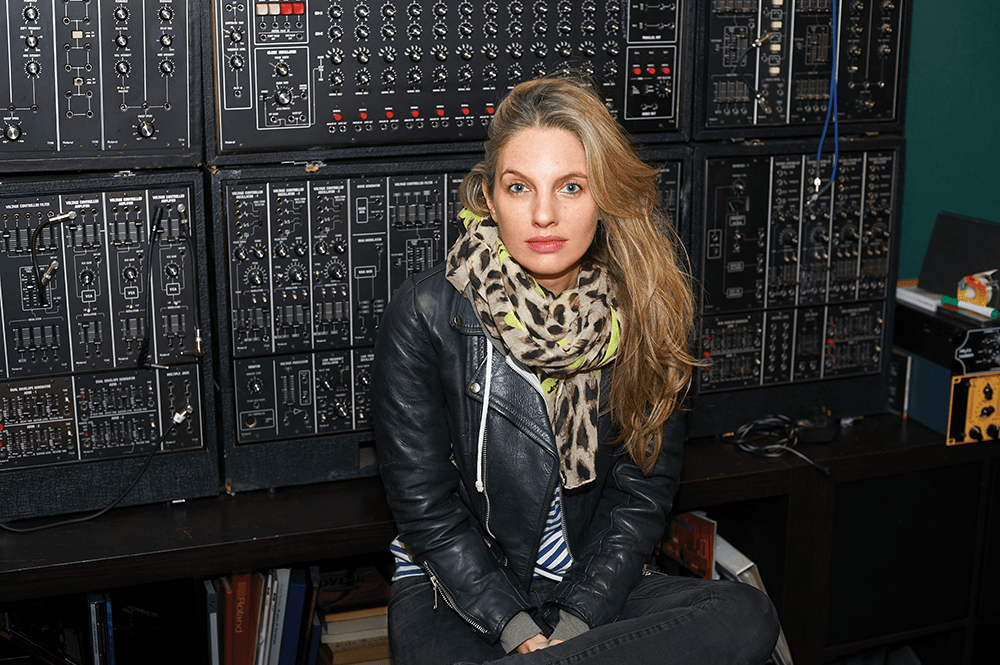 Though she’s just picked up the Best Producer Award at this year’s Music Producers Guild ceremony, it’s not the first time Catherine’s won an MPG, as in 2016, she won Breakthrough Producer Of The Year…

“It was pretty amazing,” she says, “but it was good and bad. I needed affirmation or confirmation from my peers to legitimise what it was that I did. You don’t know if what you’re doing is good, but it felt like something that clarified it for me. Afterwards, it didn’t feel like it filled that void, though. I think I’d been working towards it, the accolades, the No. 1s, that kind of success.

“I spoke to a friend who runs a record label and had success with his band and he said: ‘I felt the same, too, it doesn’t feel like you thought it would feel, but it has made me enjoy every day in a different way, because it isn’t about the end goal, it’s working with the artist’. And that is the best advice I’ve had, because ever since then, I walk into the studio with a whole different approach. I love what I do so much more, in a whole different way.”

After being heavily involved in the Foals project, Marks was heading for the role of producer, but it was one she was in two minds about aiming for when she first started out. “On the first day I worked with Flood, I thought: ‘I want to be in the producer chair’, but the more I realised how big that responsibility was, the more I was like: ‘Oh god, maybe it’s pretty cool where I am right now!’” she says.

“When I started working with Alan, he said: ‘For me, you’re just going to be a mixer’. In a way, that was great, because I’d never been involved in the mixing process to that level before, and it made me understand how something would end up and that informed me as a producer. So when I’m recording, I’m recording how I want things to sound at the end – the recording process becomes part of the mixing process.” 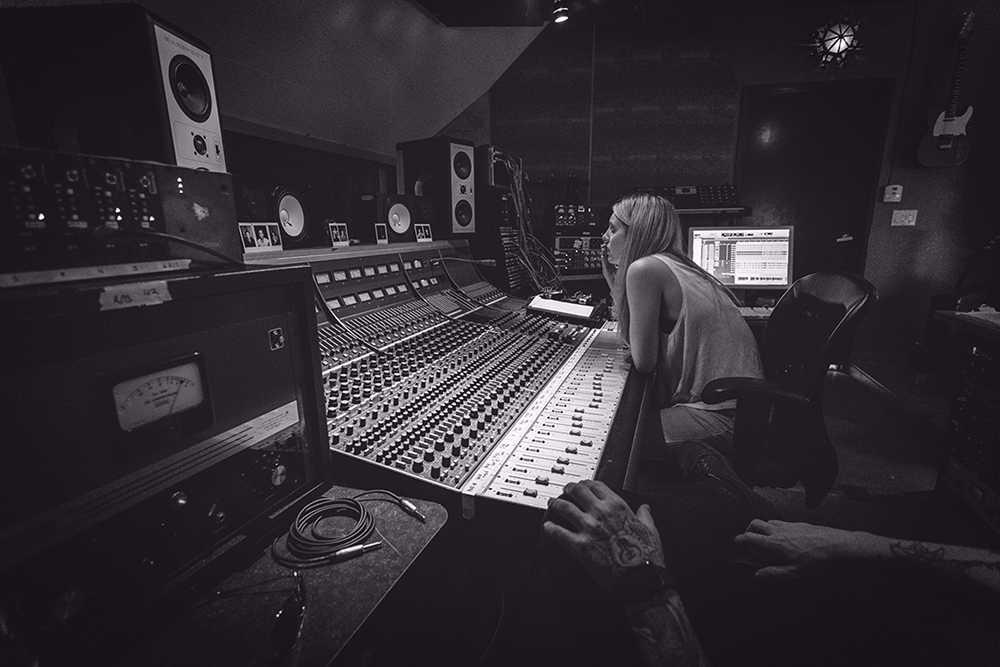 Learning every stage of the studio process and the importance of one role’s impact on another eventually gave Catherine the confidence to produce entire projects.

“When I was mixing artists, those artists might want me to produce stuff and I was just given opportunities and I said: ‘Yes’. Because of the success of the Foals project, I went around and met a load of record labels. I walked into Fiction Records and met [MD] Jim Chancellor, who had already been a wonderful champion of mine and he said: ‘Oh, I’ve got just the project for you’, and it was an artist called Meanwhile, which was amazing and that was my first production for a major label. But unfortunately, it was never released. That was in 2013 and then it’s just snowballed from there.”

Nowadays, the roles of engineer, assistant and producer are fluid and often overlap. Even the producer role is not set in stone. “I’ll give you two very different examples,” she says. “With The Big Moon, we essentially recorded that album over 12 days, but I was only there for seven, as I had to go off to do Manchester Orchestra. That wasn’t a lot of time, but those girls were so brilliant. It’s rare that something like that would work, but it totally did. I’d worked with them previously, so we had a great relationship, but what was important was that we spent a few days rehearsing and in pre-production, ironing out any questions that we might have had about the songs.

“It was all very clear what was going to happen, and they were so well rehearsed. We figured out tempos, tried different drum grooves and structures. Everything was clear and all we needed to do was the performance in the studio and work on the sonics, which we’d talked about, too. It was such a great vibe. In the end, it was really all about getting that awesome performance.

“The complete opposite of that was working with Manchester Orchestra,” Catherine continues. “We’d never met in person, but we’d talked over months on the phone, slowly refining and coming up with ideas for each song. We did a week’s worth of pre-prod. The songs were written, but we didn’t know how it would end up. It was ‘how far do we want to take it?’ and there was a real exploration and experimentation and we were all willing to go in deep. So we went to a studio for two weeks, recorded all the raw stuff like the drums and it was more of a sonic discovery.” 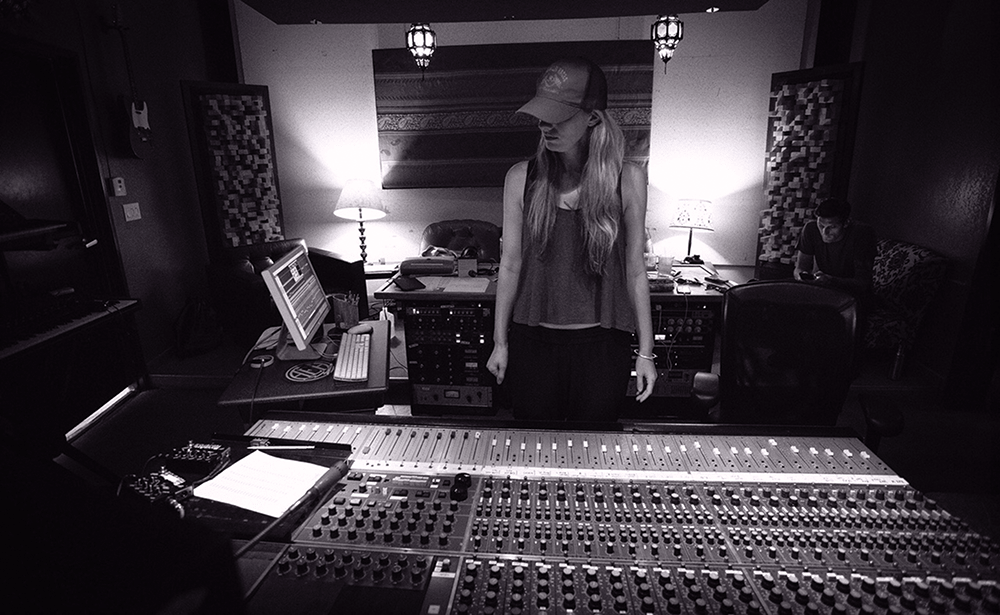 Catherine has just co-produced The Wombats with Bastille and Rag ’N’ Bone Man producer Mark Crew. “I’m really excited about working with him,” she says. “Constantly learning is important and I think we both bring something very different to the table.

“I feel like I’m just at the start and there’s another 20 levels to reach,” she says, of her future ambitions. “I’d like to work with Mark Ronson or Dr. Dre, or even Metallica – something totally different – working with really inspiring artists and producers on things I wouldn’t necessarily work on. I love a challenge.”

Thanks to the Music Producers Guild for helping with this interview. Basic Membership of the Guild is free, and all music producers at whatever level of recording activity can become Associate Members for £55 a year and receive MPG news and discounts. Full Membership costs £120, and offers a substantial list of benefits – including voting privileges for the MPG Awards.