Here’s an overview of just some of the vast array of gear in Studio 355 – Bernard Butler’s studio and creative hub. In his own words… Trident Flexi-Mix Desk BB: They were originally built for Queen to go on tour with. You can join loads of them together, so you can get 32-, and 16-channel […] 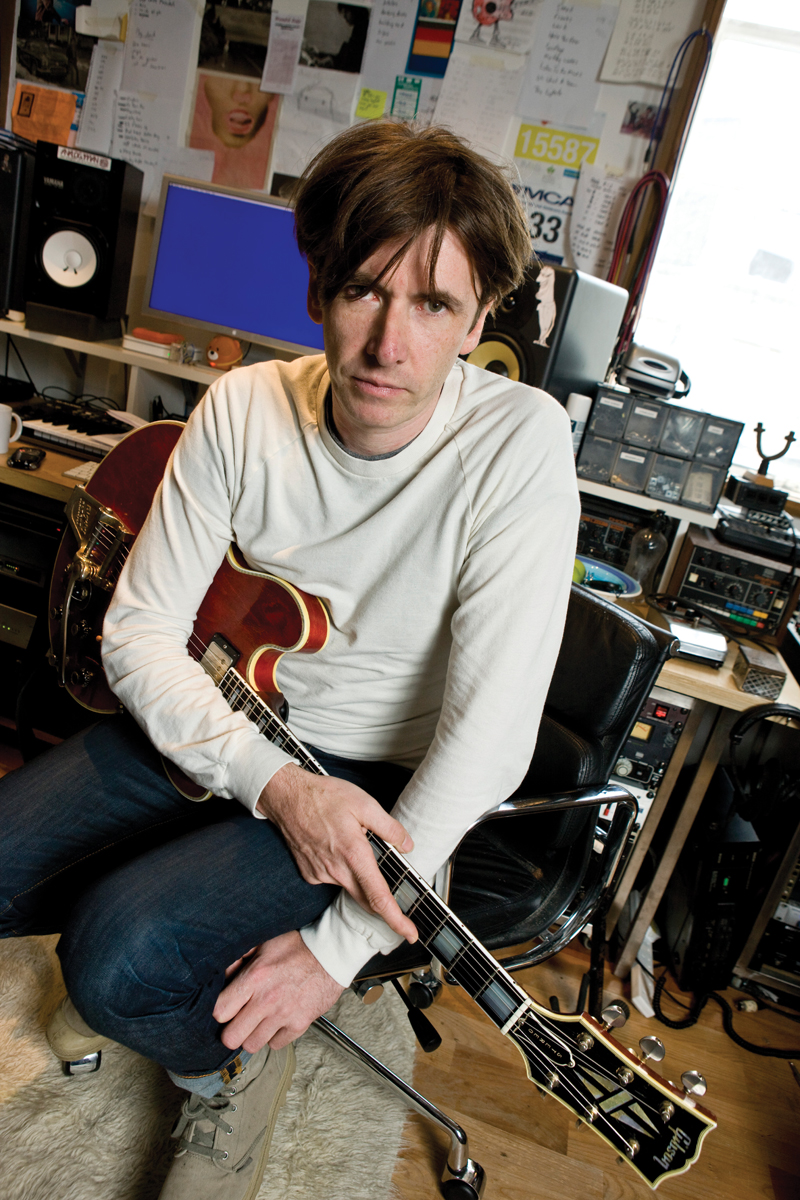 Here’s an overview of just some of the vast array of gear in Studio 355 – Bernard Butler’s studio and creative hub. In his own words… 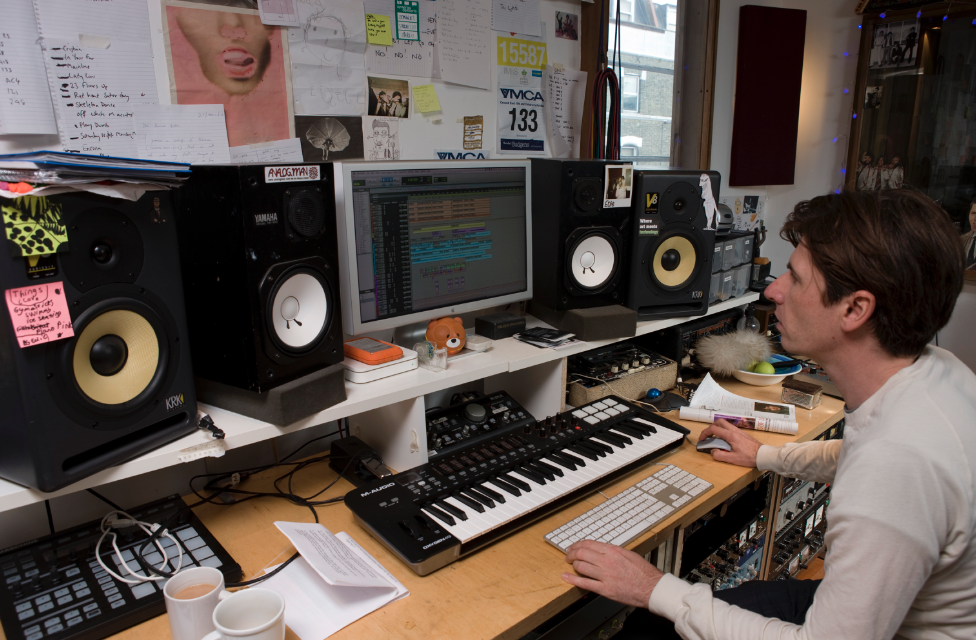 BB: They were originally built for Queen to go on tour with. You can join loads of them together, so you can get 32-, and 16-channel versions as well, but mine is 10. They’re also modular, and you can get compressor modules and stuff. It’s really great. I got it mainly because when I moved in here I needed to get loads of mic preamps for doing drums, but then I installed this and it just solved the problem. It’s effectively 10 really nice mic amps and a really straightforward EQ, so anything in my drum room goes through that. You can also use it coming back out for summing. It’s alleviated my need to use an expensive mic preamp for the kick drum. It’s also great for guitars – I’ll distort the mic pre and the EQ. 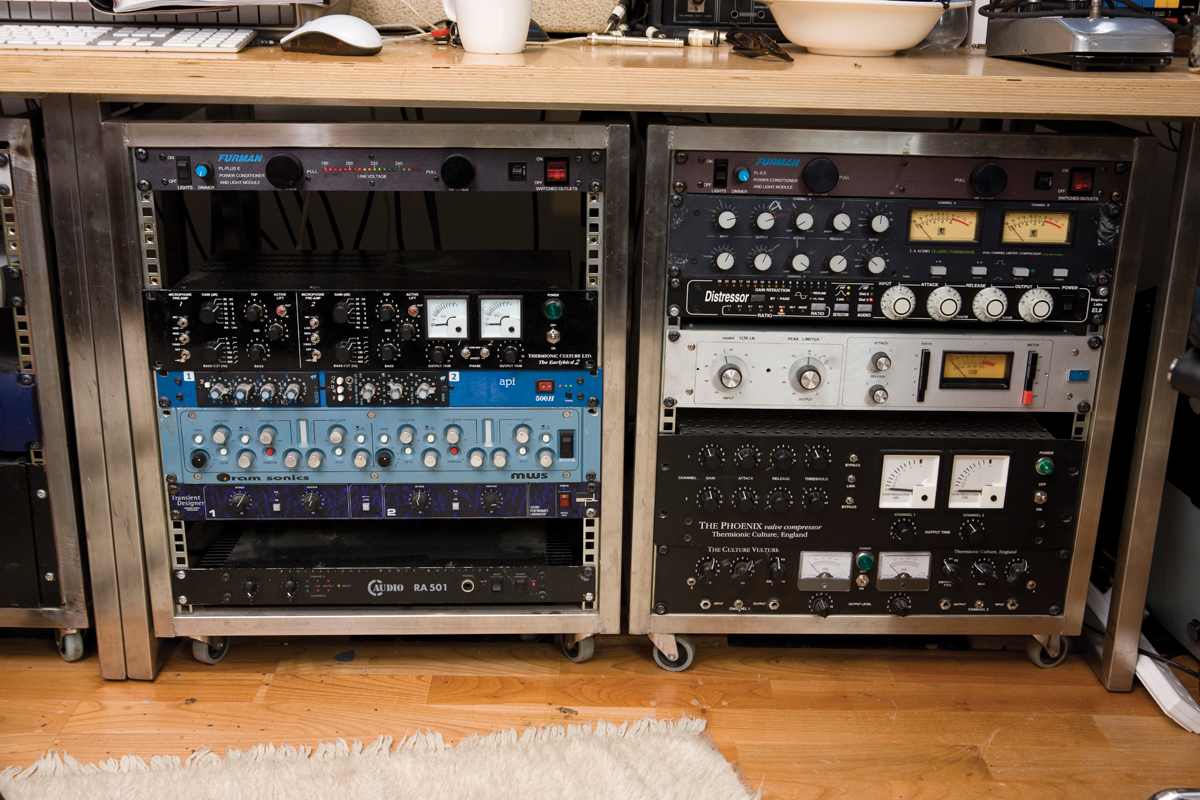 A raft of outboard aids the production process

BB: The Phoenix sounds amazing – often I’ll put the whole mix through that.

BB: If I’m recording vocals then I’ll always use the Earlybird as my first choice of preamp. I don’t use the EQ much but the filter is really great. It’s really very clever – you can pull the filter in and then nudge the bass up and get a mid-range push. You really can get some great sounds out of it. It’s also got a very nice selection of switches that I can’t stop tinkering with. 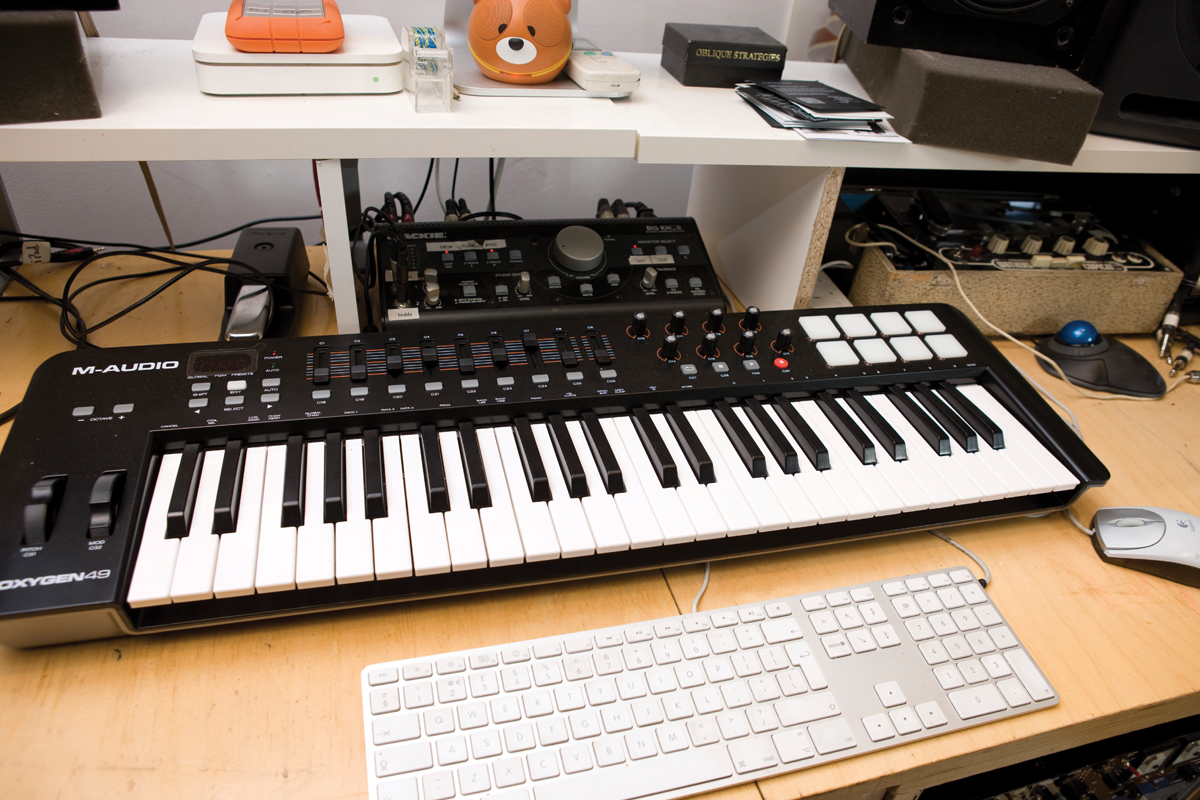 BB: I love this old Watkins Copicat, the delay works but it also serves me as an amazing preamp. That’s how I’ve always used it, really – it works as a valve pre. I just stick things through it like that for a big fat fuzzy sound. 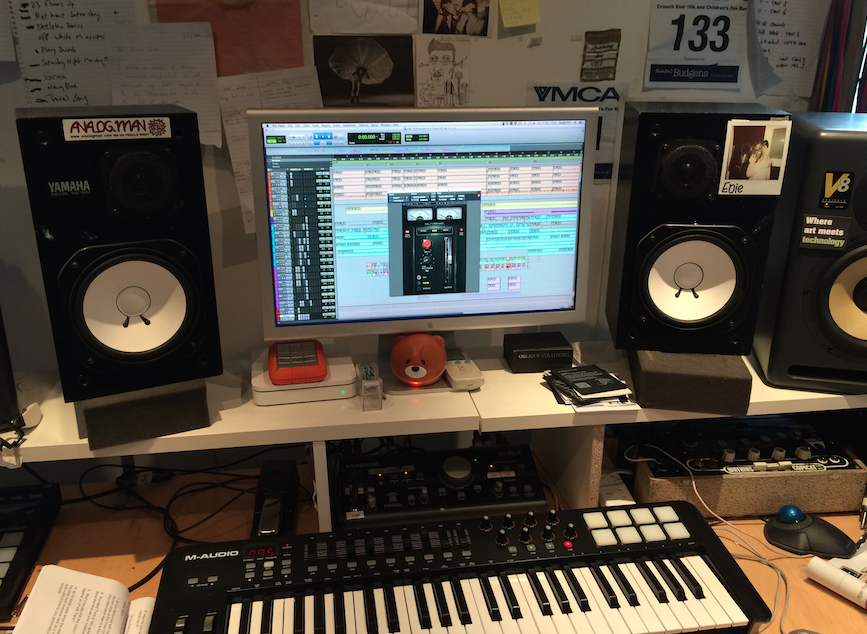 BB: This is the Heart of Glass box, also used on In the Air Tonight – you can get the actual Heart of Glass sound on there. I use it all the time. I worked with a band called Teleman a lot last year and we used it on a few of their recordings. I’ll usually put it through the Roland Space Echo and then out through an amp for that late 70s sound, especially when it goes through a Fender Twin with that big reverb. I always use the Space Echo for reverb as well. 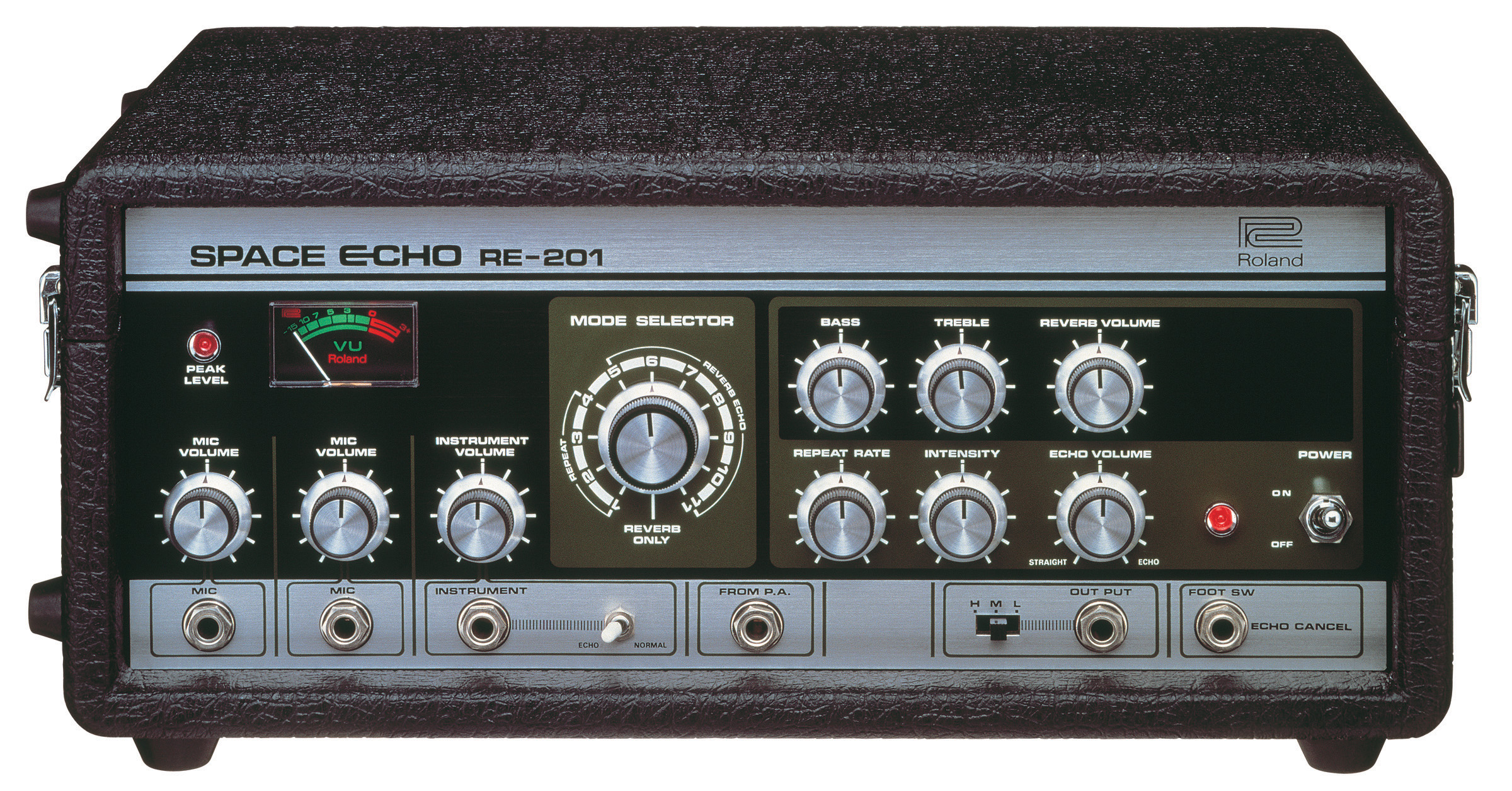 The classic Space Echo from Roland, which Bernard has used on many productions

BB: I have to admit that I don’t really use the Maschine too often. I got it because I’d seen so many kids with them and I thought, ‘this is what you have to do to be modern,’ but if I plug something in and I can’t get to grips with it straight away then I can’t be bothered! 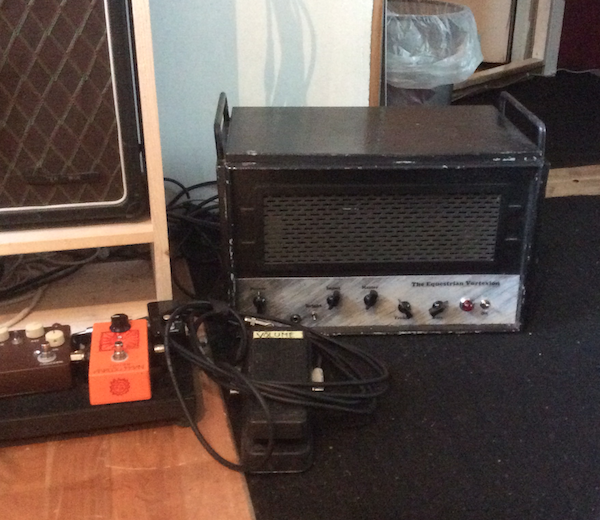 BB: It may not look like much but it’s brilliant. It was a total one-off and was originally an old 60s Vortexion mixer that I got for £80. It didn’t have a plug on it, and I gave it to a friend of mine who then kept it for about eight years. When I went round and saw it he’d actually turned it into an amp. The sound is really amazing – it’s just got this pure, glammy, Mick Ronson kind of sound. It’s amazing. So, yeah, it’s a total one of a kind. 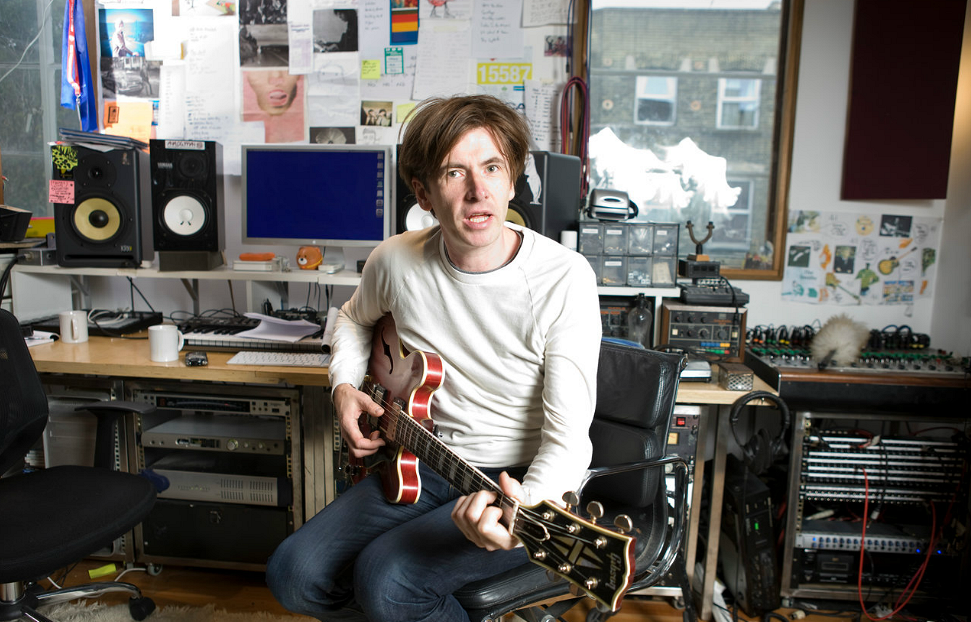 Play it again Bernie! – Bernard blasted through some of his classic songbook in the studio with his iconic Gibson 355. In the background you can see the Trident Flexi-Mix Desk and Bernard’s monitors of choice – KRK’s and Yamaha NS 10s

Click Here for The MusicTech interview with Bernard Butler

Click Here for the Guitar & Bass interview with Bernard Butler