Hot on the heels of this year’s Superbooth – a show that’s rapidly becoming one of the highlights of MusicTech’s year – we caught up with the show’s creator and industry legend Andreas Schneider to discuss how Superbooth came to be… “I had the idea that small manufacturers are the important innovators. They generate the […] 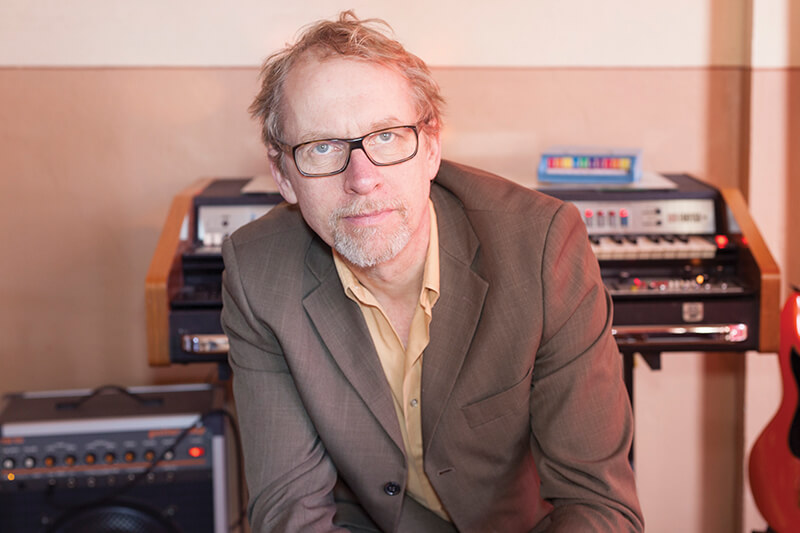 “I had the idea that small manufacturers are the important innovators. They generate the ideas and products that are often then copied and ‘remixed’ by the big global players or others. I wanted to put these little companies that trust me in touch with the retail and PR business for musical instruments,” Andreas Schneider, progenitor of Superbooth, tells us. His plan has clearly worked. Superbooth has grown from a collaborative stand at Musikmesse in 2002 to a fully-fledged show in its own right by 2016.

We’re still winding down from the excitement of this year’s event, once again taking place in Berlin’s FEZ centre (for more information on our specific show highlights, see page 8). While we’ve been in attendance for the past two years, what was repeatedly being trumpeted, prior to the doors being opened on Superbooth 2018, was how the boutique modular synth show was going to expand out and embrace some of the more general areas of the music production world.

We feared that this expansion would lead to a dilution of the show’s distinct personality, but happily, our worries were unfounded. Though the show was certainly more accessible than ever before, it has retained its integrity – and its cool.

“We have to look across the borders,” says Andreas. “A good synth player has to understand what a good drummer does, and the other way round,” Andreas tells us, explaining why the show is now stretching beyond its synth-based roots.

“We are meeting here for music and even if the focus is on synths, we wouldn’t be able to hear them without a good speaker or desk. We have to have wider-ranging companies here. I would not like to exhibit drums and string instruments, per se, but it is more than welcome to have Earthquaker showing their devices, with a Fender Rhodes and an original Minimoog or accepting a limited group of software makers or good outboard to help us understand the mixture. We will never be able to show the whole number of possibilities, and this is not the goal, but it should be well-selected.” 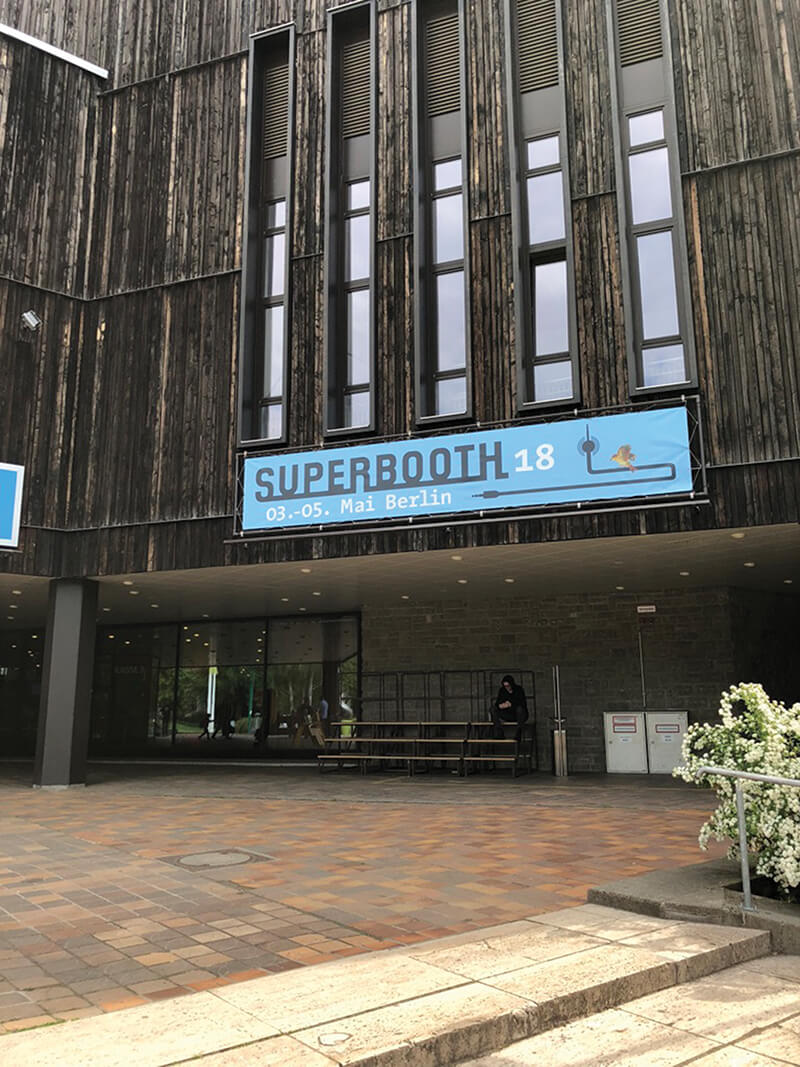 So Andreas still believes that Superbooth will remain a modular synth show at heart, but he’s also very pleased with the more welcoming nature of the show this year.

“I was happy that we could increase the volume of the tradeshow while not losing the atmosphere and simultaneously managing to make the whole thing even more attractive. The line-up of the concert program was better, the ‘big’ hall had a great acoustical atmosphere so I was as happy as everybody else was.”

We ask Andreas if anything in particular, turned his head this year.

“Oh yeah, the small version of the Haken Continuum; the cool handmade instruments that were being used by Christian Günther for his Gesprächskonzert; the LeafAudio selling together with a bow. There’s quite a few presentations online (take a look at my Vimeo account or at stromkult.com) to see more.”

The industry bridge-building that defined the show this year is a far cry from Superbooth’s humble beginnings.

As Andreas tells us, “When I started, the collaborative stand at Musikmesse Frankfurt in 2002, small companies shared the expensive few square meters we could only afford together. Next to (quite dull) exhibitions of international keyboard manufacturers. We had a big success with Doepfer, Elektron, Vermona, Big Briar and others in the first year, so we went ahead and just built on that initial small success and made it bigger and better over the years.”

Andreas tells us that the show was always keen to incorporate artists and performers.

“Many of the artists and product demonstrators were my clients buying the products from SchneidersBuero (Andeas’s modular synth workshop) that became my store, SchneidersLaden, later on. I myself was playing organs and synths in a band once, became a marketing slave, manager of a band and finally met Jürgen Michaelis (alias Jomox) who had a lot of passion for his analogue drum machines, that I wanted to understand.

“After a year of experience in the world of trade, I realised I was keen to develop my real passion and started making electronic music myself at exhibitions, in the streets and wherever it was possible, so I met plenty of people like Jürgen who gave me units to be promoted.”

Andreas tells us that, “In the beginning I had artists like TokTok popping up with bags of desktop units to be combined in unbelievable complicated ways filling the desks played live.” But Andreas tells us that he, “liked the idea of letting plenty of ‘non-musicians’ make music with each other, patching clocks together or just building atmospheres without a common clock, based on noises and experiences.

“The good thing with electronics is that you always have a partner, even if you are on your own. The electronic set-up you built is always doing things that you did not expect. Even after rehearsing with your set-up over many years you will be surprised here and there by the details that differ. I think this is similar with classical instruments.”

We can’t help but note that the FEZ seems like an opportune venue for the show, with its Orbitall Space Travel Centre contributing to the show’s retro-futurist vibe.

“Well we saw about 10–15 potential venues just in Berlin and most of them were fairly boring, they had big halls with just concrete all over, or they were too small or far too expensive. The FEZ was the choice of Andre Kaufmann from the beginning, but I thought it was too far away so we tried it with the Funkhaus first (in 2016) – that was a real disaster in the end. Luckily nobody noticed!”

With the modular community growing into its own bona-fide subculture in the music technology world, what are Andreas’s thoughts on its sudden ubiquity?

“The modular world is growing so fast now that it won’t be long before you can buy a module at every gas station!” Andreas says. “This has to lead to a selection of products in quality stores and I would welcome this a lot if this selection is accepted by the clients that have to understand the difference between passionately-made products and turnover-driven products.

“At the time already, some of the brands are available at Thomann, others at Music Store, others at Just Music and they compete over their prices – the prices go down so smaller shops like Hieber Lindberg will no longer be able to justify their pricing and kick them out.”

Much of the show’s current success can be attributed to the core values at the heart of it.

“I think it is all about making music, learning about the existing techniques to do this, experiencing new ways here in all directions and Superbooth must be a place to meet people who are open minded and willing to look over their existing horizon. This is all paid by the companies who bring ideas and those who take ideas and make money out of it of course, but our job is to moderate between these different groups, placing them in a good balance with each other.

“I could imagine and I hope that Superbooth will survive the current modular trend. I welcome the DIY scene, I welcome teachers from other disciplines than ‘just’ music, I am looking forward to new ideas and similar groups of innovative products. I personally hope that the quality brands making modulars will survive the ups and potential downs of the mass modular market of today.”

Beyond Superbooth, to the world of modular synthesis in general, Andreas is hopeful. “I hope to find more modulars in schools, not just to make sound but to understand physics, maths and art by making music. I hope the consumers of music will understand a bit better to divide between the “playback” of a rehearsal and the real performance. The different Superbooth concerts had both, so we are on the right way to explain it.”

So where does Andreas see Superbooth ultimately expanding to? “To make Superbooth survive we have to keep it being an international meeting with exhibitors from India, Turkey, Russia, USA, Australia, New Zealand, China and wherever. We are a meeting of musicians and artists from all these countries and we should not only talk about transistors and chords, but also about politics and society if we don’t do it already!”