Welcome back to the 100 recordings that changed music here at MusicTech.net – this week we’re counting down another ten key tracks from the history of popular music, highlighting the tracks that sculpted the musical landscape as we know it today You can read the first four parts of this multi-part feature by clicking on […] 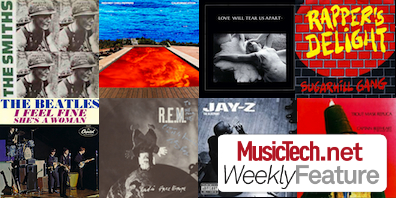 Welcome back to the 100 recordings that changed music here at MusicTech.net – this week we’re counting down another ten key tracks from the history of popular music, highlighting the tracks that sculpted the musical landscape as we know it today

You can read the first four parts of this multi-part feature by clicking on these links – Part One, Part Two, Part Three, Part Four

So as we proceed down our list make a note of the tracks that you feel have had an impact on music and let us know, we’ll reveal our number one song in a few weeks time!

Following the introduction of four-track recording at EMI’s Abbey Road at the end of 1963, The Beatles began to experiment more freely, searching for new sounds to keep them ahead of the game. Reported at the time as an electronic accident, the introduction features the sound of John Lennon’s guitar feeding back after Paul McCartney played a low A on his bass. On hearing the sound McCartney said: ‘What’s that, voodoo?’ ‘No’, replied George Martin, ‘it’s feedback’. The group embraced the effect, resulting in the first use of feedback on vinyl

If you thought The Band sounded laid-back, JJ Cale was virtually comatose. The dirt-poor Cale, who was well into his 30s, wasn’t even aware that Eric Clapton had recorded his song After Midnight until it became a hit (Cale also penned Cocaine, which Clapton also covered to much commercial success). At this point he was persuaded to record an album and sessions took place at Bradley’s Barn and Moss Rose Studio with a cast of pickup musicians. Call Me The Breeze hinges on a primitive drum machine groove and Cale’s lyrical guitar. Plenty of artists covered this song but the original is still the best.

It has always been tough for guitar bands to produce anything with a genuinely distinctive sound and feel, but The Smiths managed to pull it off with How Soon Is Now. Anyone with even a passing acquaintance with Bo Diddley would know where the basic rhythm idea came from, but synchronising the amp tremolo with the 80s snare-driven drum track was something of a masterstroke. The process was also tortuous because the tremolos of the two Fender Twin amps kept drifting out of time, so the rhythm guitar track had to be recorded in short bursts between amp adjustments.

Rock music was pretty much a boys’ club during the 60s and 70s, but poet and singer Patti Smith challenged that head on. However, her best-known song was written in collaboration with a pre-mega star Bruce Springsteen. At Record Plant, Springsteen was recording Darkness On The Edge Of Town while Smith’s band was recording Easter next door. Producer Iovine, who was working on both albums, gave Smith a cassette of the unfinished song. Smith recast it and added her own lyrics – the rest is history. (Springsteen sometimes performed the song live with his own lyrics.)

Released in April 1980 (the month preceding singer Ian Curtis’s suicide) the song became a hit worldwide, but the remaining members of Joy Division chose to re-convene as New Order. It features a haunting synth theme, 16ths on the hi-hat and bassist Peter Hook’s instantly recognisable playing style. Of course, Curtis’ voice and lyrics define the track to create an atmosphere that would have been poignant regardless of the tragic aftermath.

In a very early example of taking a soul/funk riff and adding rap vocals to turn it into a hip hop track, the Sugarhill Gang lifted the instrumental track from Chic’s Good Times and looped it, adding the vocal refrain over the top. This track became a top 40 hit at a time when hip hop was still largely unknown outside of the underground.

By the early 80s punk was dead, new wave proved to be neither and synthesizers and drum machines looked like taking over – as REM discovered during an abortive album recording attempt. Trying again with Don Dixon and Mitch Easter on the knobs, guitar solos and synthesizers were not part of the plan. In 2010 the album version of Radio Free Europe (the album was titled Murmur) was added to the Library Of Congress National Registry for setting ‘the pattern for later indie rock releases by breaking through on college radio in the face of mainstream radio’s general indifference’.

We’ve picked a track at random because Trout Mask Replica had to make the list. After eight months of rehearsals while living communally in enforced poverty under Beefheart’s emotional dominance, The Magic Band was deemed ready to record. The album itself took six hours, with vocal and horns overdubbed later. If Pena’s intro doesn’t make you weep with laughter, Beefheart will probably remain an enigma for you.

The band recorded live in the studio with the bass and guitar amps isolated in a separate room and the vocals were done in a booth with a Shure SM57. Everything went down on two sync’ed two-inch Ampex tape machines through a vintage Neve desk and lead vocals were subsequently transferred to Pro Tools for comping. No reverb or delay was added during mixing, and besides the toms and a few guitar overdubs, Californication – along with the rest of the album – is mixed in mono. The extreme limiting applied during mastering caused some controversy.

Never one to shy away from using well-known samples as the basis for tracks, on his sixth album Jay-Z enlisted the help of Kanye West and Just Blaze and they brought with them a new sound leaning heavily on carefully selected soul samples. Before this, mainstream hip hop had favoured the slicker, more in-the-box sound of Timbaland, but The Blueprint switched the focus back to sampling, albeit coupled with a more upmarket sound.

Be sure to join us soon for the next part as we edge ever closer to the top ten!