Clocks are an integral part of a Eurorack setup, allowing synchronisation right across a rig. Dave Gale delves into the world of pulses, to discover much more than face values… 4ms RCD – The Rotating Clock Divider from 4MS has numerous division options, offering up some excellent polyrhythmic options for your triggers Say the word […] 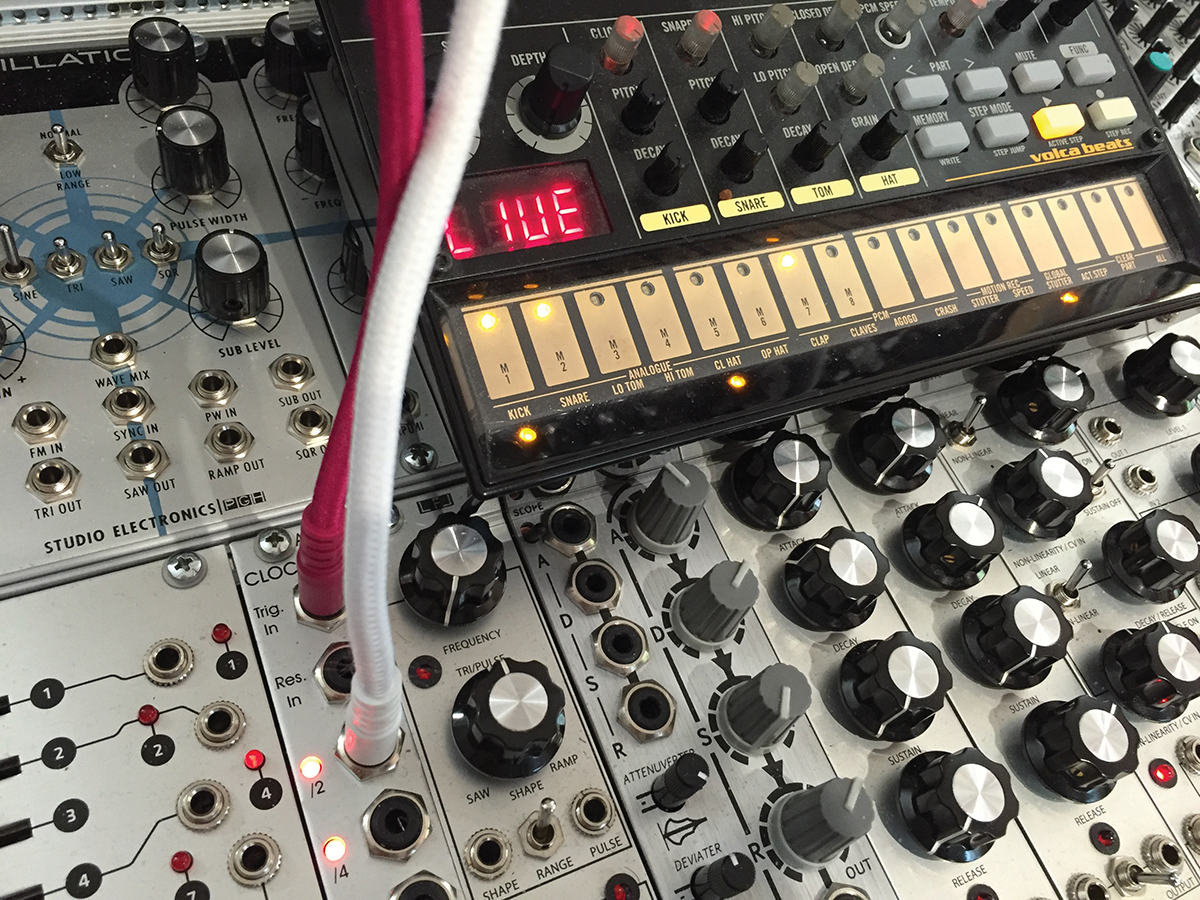 Clocks are an integral part of a Eurorack setup, allowing synchronisation right across a rig. Dave Gale delves into the world of pulses, to discover much more than face values…

4ms RCD – The Rotating Clock Divider from 4MS has numerous division options, offering up some excellent polyrhythmic options for your triggers

Say the word ‘clocks’ to any normal person with an interest in music, and they will probably start singing a well-known piano line from a song by Coldplay (and what an amazing earworm that is). But to somebody with a taste for the intricacies of electronic music, they may well smile and ask ‘which type of clock?’

Over the years, there have been many forms of clock; some analogue and some digital. ‘Word clock’ is one that many will be aware of, thanks to the world of DAWs, and MIDI clocks may well get mentioned in certain circles, too, but in a strange return to a format with its roots planted firmly in the past, clocks in Euroracks are very simple beasts.

Anyone who has listened to the album Random Access Memories by Daft Punk will have heard a track which is something of a homage to the legendary producer Giorgio Moroder.

The spoken word that forms the introduction to this track hears the man himself speaking about the way that he created a click track to synchronise his Moog sequencer, which formed part of his modular, to analogue tape. The rest is classic electro history, in the shape of the extraordinary sound of I Feel Love featuring Donna Summer, which hit the musical world like a ten-tonne truck.

In many respects, the simplicity that Giorgio describes here is the essence of what clocks in modulars are all about. Their purpose is to provide a base pulse, which can be sent in the direction of modules that can accept this pulse, normally labelled as a ‘clock input’, so that any modules in this chain will stay in time with each other. Sounds simple, and most of the time it is, but occasionally we might want to add some additional functionality to proceedings, and that’s where things get more complicated.

Apart from the aforementioned Doepfer clock divider, one company that seems to have taken the whole idea of clocks to heart is 4MS. It does a number of clock dividing and multiplying modules, the most simplistic of which is the RCD (Rotating Clock Divider).

Apart from looking after the basic concept, it also offers some unique and alternative clock divisions, such as /3, /5 and /7. Using these as pulses can create some beautiful polyrhythmic patterns, which can then be rotated through their respective divisions, causing even more interest. Similarly chaotic concepts can be found in the Pittsburgh Modular Time Runner, the functionality of which is also linked to pattern generation. Definitely worth a look if you like more chaotic triggers.

Dopefer A-160 it’s simple, classic and does the job with the minimum of fuss and, being Doepfer, it’s very cost effective

Clocking to MIDI and DAWs

If, like me, you find yourself hooked into your computer and DAW quite a lot, it’s perfectly possible to generate a nice clock to work with from a chosen MIDI-to-CV interface. The Pittsburgh Modular and Studio Electronics MIDI 3 will both accept an incoming MIDI clock from a DAW, and allow a clock-pulse signal to be generated.

Equally handy is the ability to then divide the clock within the MIDI 3, so that you can lock a Eurorack-based device right into your DAW-based production. Similar concepts are available from the Mutable Instruments Yarns and the Doepfer A-190.

The Odd Ones Out

There’s always someone who wants to spoil the party, and regrettably the one company that doesn’t currently conform to the same format of 16 pulses per bar is Korg, much to the annoyance of anyone who owns an SQ-1 sequencer and/or any of the Volca range.

Plugging a 16th-note clock into a Volca will result in it running at twice the speed of the rest of your system. However, all is not lost! You’ll just need a clock divider, to offer it a /2 clock in order to get it to lock into your modular – or, even cheaper, halve the time of your Volca sequence to compensate.

As with all things Eurorack, there can be many ways of approaching a topic to achieve a similar outcome, so we are going to aim to try and keep it simple. If you have a sequencer in your Eurorack, I would pretty much stake my career on the fact that it will have either a ‘Clock In’ or a ‘Clock Out’, or more likely still, it’ll have both.

Given the likelihood that this may well form the centre of your system, and probable starting point, it makes sense that you might want to consider this your ‘Clock Master’ – or to put it in a less grandiose way, it’s the unit which will start your clock chain, and send a clock pulse to other units to lock to. If you change the tempo/speed on your sequencer, other units should follow.

So let’s take a common scenario; you want to lock a second sequencer to your first. By simply taking the Clock Out from your first sequencer, and sending it to the Clock In on the second, you should have a reliable clock chain. Easy enough. But we can take this basic concept further, by perhaps sending the clock to something else in your rig, such as an envelope generator.

Now you’re probably ahead of me at this point and you’re thinking that the envelope will fire off every time it receives a clock pulse, and you would be right. But it is at this point that you will discover how rapid that pulse is. Most clocks in the Eurorack world fire off 16th-note pulses, which is to say that you will get 16 pulses to a single bar of music, a little like a hi-hat (now you’re really ahead of me).

So you could, in fact, use your clock signal to make a basic insistent hi-hat like sound, which triggers every 16th note. Of course, you could also look to use it for something more note-like, which might remind you of some of the earlier ‘single note repeated’ musical ideas that we’ve heard in earlier forms of electronic music, and now you know why.

In a perfect world, you could take your clock signal and chain one unit to another using a series of ins and outs – but what if your units don’t allow for this? That’s where you will need either cables with splitters, or some form of multiplier module, of the type that will take a signal and split it. There are many modules that will do this, and both passive and powered multipliers will do the job; but somehow, a powered multiplier will offer more assurance, although I’ve never had problems with passive mults myself.

For some (myself included), it’s often nice to make use of a dedicated unit to act as clock master, and nothing does this job better than an LFO module. Selecting a nice, tight square wave (or pulse!) will give off a significantly tasty signal which you can route in numerous directions, allowing nice, tight sync’ing across the system. It also means that you can have an elegant tempo control, right on your LFO, and there is a certain charm to this mode of working. Where does the clock start? It starts there, on my LFO module! (It’s worth noting that

I don’t normally talk to myself in these tones, it’s only when thinking patches through… be honest, you do it, too). 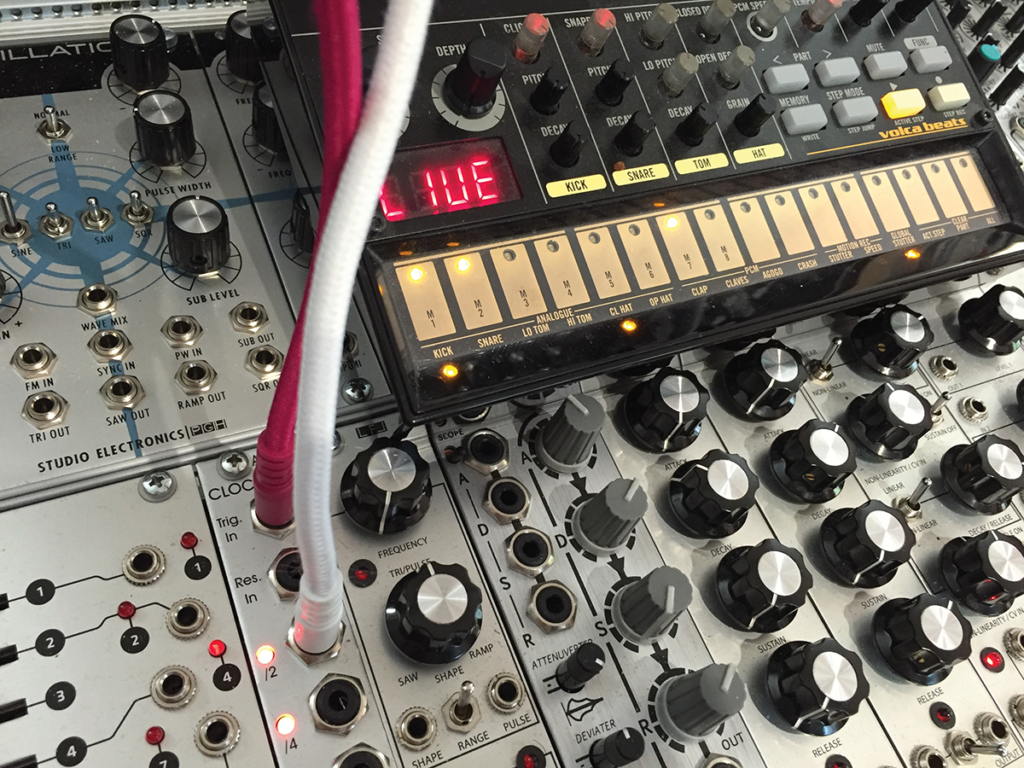 So far, then, so good. We’ve got a clock signal and we’re routing it all over the place, but now we are getting a little bored of that 16th-note hi-hat sound that we used earlier, and would rather like it if it played eighth notes.

Well, luckily, there are devices and modules out there just right for the task, and not surprisingly, the clue is in the name. Clock dividers do exactly that; take a clock and divide it, often numerous times, with an option for separate outputs for each division.

Let’s consider one of the most basic dividers, from the ubiquitous Doepfer. The A-160-1 will take your incoming clock, and divide it by 2, 4, 8, 16, 32 and 64, meaning that you could have a long 808-style bass-drum timbre, triggered every four bars, by exploiting the /64 output.

It’s also got a rather handy ‘reset’ input, meaning that you can tell the divider where beat one of bar one actually is. Useful beyond all doubt! However, if you have a desire to increase the clock speed, in multiples, you’ll be wanting to use (you guessed it) a clock multiplier. To be fair, these are less common, but their name and purpose speaks for itself.

Taking a moment to think about this one, what other reason might you have for wanting to divide a clock? A very common pursuit is linked to the idea that the user may want to run a secondary sequencer, considerably slower than the primary, with a view to controlling the pitch of the primary sequencer from the secondary sequencer.

This would, in effect, mean that you could shift the sequence which is playing on your primary sequencer up or down, to change harmony, and this could happen every bar, or even every two or four bars.

This is not for the faint hearted, as ultimately, it’ll take time to set up and perfect, but it’s something employed by many producers who wish to exploit the ‘live’ notion of working with a modular.

There is no doubt that there is a lot of satisfaction to be had from setting up a sequencer chain of this type, and the purists will doubtless defend this with large dollops of integrity. Yet there is an argument that a similar outcome could be achieved with the use of a sequencer such as an Arturia Beatstep Pro, which has the ability to store complete song-style patterns.

Granted, it’s not the traditional, purist approach to the problem, but it does save a lot of time, and the Beatstep Pro will also input or output a clock of your choice, which makes it a very sensible centre to a system. Time to rock out with your Clock Out!