You can use top-of-the-range recording gear, the flashiest instruments and the tightest bunch of musicians you can muster, but if your top-line melody isn’t up to par then your song is going nowhere. Andy Price tunes up… We’ve previously talked about the essentials of songwriting by looking at some basic forms and also examining how […] 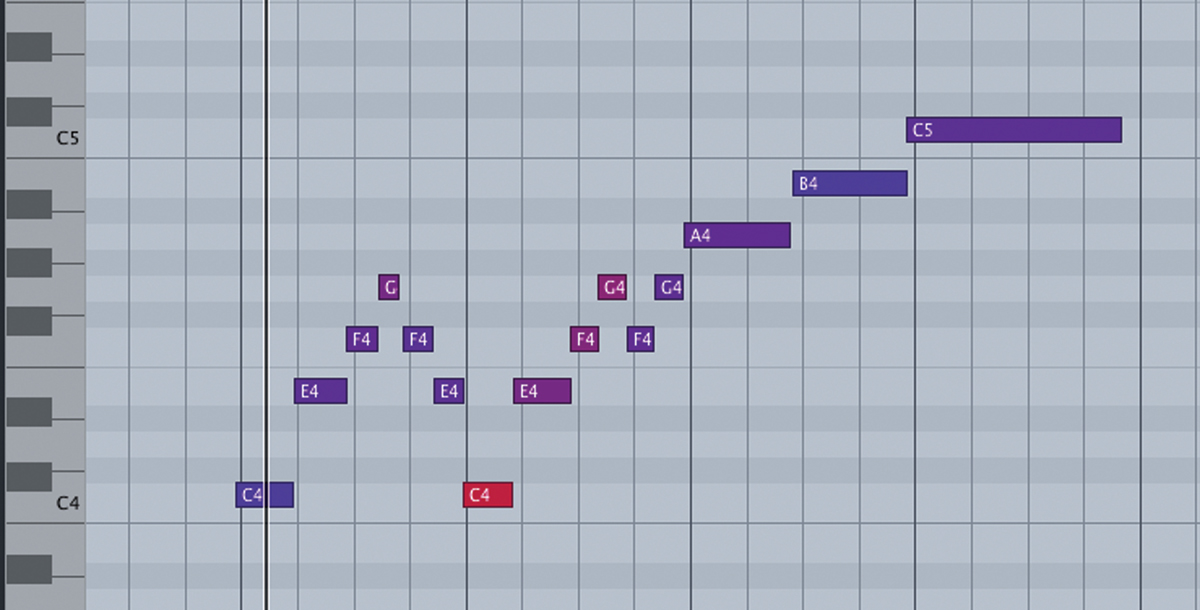 You can use top-of-the-range recording gear, the flashiest instruments and the tightest bunch of musicians you can muster, but if your top-line melody isn’t up to par then your song is going nowhere. Andy Price tunes up…

We’ve previously talked about the essentials of songwriting by looking at some basic forms and also examining how writing in key keeps your chordal selections aurally pleasing. Now we move on to what is without question the most important element of a successful song, and that’s the melody.

The main vocal melody of a song is usually referred to as the ‘top-line’ melody, and that’s what we’ll look at in detail here. Many songwriters begin their compositions by coming up with (often through sheer blind inspiration) an idea for a melody and then finding the correct key and song structure later in their process.

An effective melody is at the heart of what makes a song memorable, so giving this element significant consideration can really make or break a composition. We’re evolutionarily hard-wired to try and detect sonic movement and to memorise patterns in sound, our memories as both music maker and listener play a vital role in whether or not a hook, and therefore a song, will endure.

From the Top
So where do we start when making our melody? What is a ‘good’ melody and how do we know when we have one? As with most things there is a degree of subjectivity – some melodies will permeate longer in certain types of brain far more than others. Much like our discussion of keys last time, many songwriters don’t fully understand exactly what they are doing theoretically when writing top-line.

But the human mind itself is instinctively gifted with great judgement of what works melodically and what doesn’t, and many vocalists tend to write melodies within their natural vocal range.

To be deemed a melody, movement throughout the intervals that make up the key has to occur (otherwise it would be a drone). There are multiple methods of doing this and there isn’t really a ‘correct’ way, so long as the intervals you use remain within the right key.

Repetition plays its part as well. To be considered a song’s hook, the central melody must reappear at key moments – the more times we hear this melody the more it lodges inside our subconscious mind. However, there is a fine line between constant repetition and keeping things melodically interesting.

By referring to the circle of fifths we discussed in the last issue we can apply some carefully thought out interval movement. More often than not, songwriters will begin their melody at the root note of the chord’s key they’re singing in, however this is not always

the case. It helps to be experimental with your starting note just as long as your melody hits the notes from the triad of the chord you’re using. For example, if you’re singing over an A major chord your vocal melody should hit either A, C# or E.

A traditionally written melody is the equivalent of a musical mountain range, with peaks and troughs of movement up and down the key notes with an easily discernible and natural-sounding flow. So when reaching for those higher notes, don’t simply go there, work your way there through a succession of gradually rising and falling notes.

Unexpected leaping can be jarring, and the human mind likes to pre-judge where a melody will go, so too much deviation from established norms can be detrimental to your song’s success.

Usually, top-line writers will compose their melody in one octave, as too much movement can make it difficult to pin down the central hook. (That said, see the Focus On… section below for examples where octave-jumping can work.)

The Colour and the Shape
So the key elements of an effective melody are both shape and repetition, as without a clearly defined shape and a recurring movement the melody will sound aimless, atonal and uninteresting. We also need to bear in mind the rhythm of our tune, which should generally follow the pulse of our song’s time signature.

Often if a melody has been created without musical accompaniment it will need to then be chopped and tweaked to fit the resulting piece of music’s rhythm.

Of course one of the things that is also vitally important is that the melody fits the feel of the piece of music you’re trying to write. There’s no point writing an uplifting, happy melody if you’re going to counter it with melancholic minor chords. Usually a spontaneously written melody will suggest which chords you will use when building your song; likewise chordal movement can imply how you will add your top-line. No approach is better than another, but the mixing of your elements must make musical sense.

Having said that, perhaps the best (certainly the most enjoyable) melody-generating exercise is just to play back a series of recorded chords and, without thinking too heavily about keys, bars and the like, just improvise. More often than not you’ll start to hear little fragments of ideas coming forth. This is my usual approach. Once I’ve amassed enough ‘idea fragments’ I’ll take one and try linking it to another.

Instrumental, my Dear Songwriter
Your top-line melodies don’t have to be limited to vocals. Try playing the same melodies on different instruments – you may be surprised to find it takes on a completely different life when a vocal melody is played on the piano. You will also be inspired to deviate and try different approaches, particularly when playing your melody on an instrument that you’re not completely comfortable with.

Another handy tip is to alter the speed at which your melody is delivered. Try it as slow as possible, then accelerate the same melody in the chorus and see what the effect is. Often this can be unexpected, but can sound rather dramatic and interesting. Other times less so. The key is experimentation!

Being a top-line melody writer is a skill that takes time to develop, akin to learning and mastering an instrument; and indeed many people make quite a good living from writing melodies. Far too often the top-line is throwaway and last minute, when really it should be given precedence over all other song-building considerations. After all, this is the part of the song that people will whistle in the street!

Focus On: Leaping To The Stratosphere
Here’s an oft-replicated trick that can result in an instant, epic-sounding hook. Starting your melody on the root and then moving to the same note of the same scale but exactly one octave (eight notes) up can have a dramatic effect on the ear. Listen to Judy Garland singing Over the Rainbow, David Bowie’s Starman and also Suede’s The Drowners – can you hear the similarity?

All these songs have a top-line that octave-leaps stratospherically in their central hooks. This kind of leap bolsters the melody of the song and creates a positive sensation for the human ear. As the two notes on either end have a similar resonance, we hear both the notational familiarity and the leap to a higher octave, creating what is akin to a kaleidoscopic, sweeping effect.

1: In general, the verse melody is the part of the song that delivers the most lyrical content, therefore sufficient space should be given to allow your tune to breathe and to clearly communicate the narrative of your song.

2: Many great verse melodies make heavy use of the dominant note (the fifth degree of a scale). The human ear will naturally want the sound to resolve to the tonic (first degree) but constantly heading back to the dominant and not the root will build anticipation for the chorus. In C major, for example, the dominant is G. (Using last week’s Circle of Fifths tutorial we can easily find the dominants 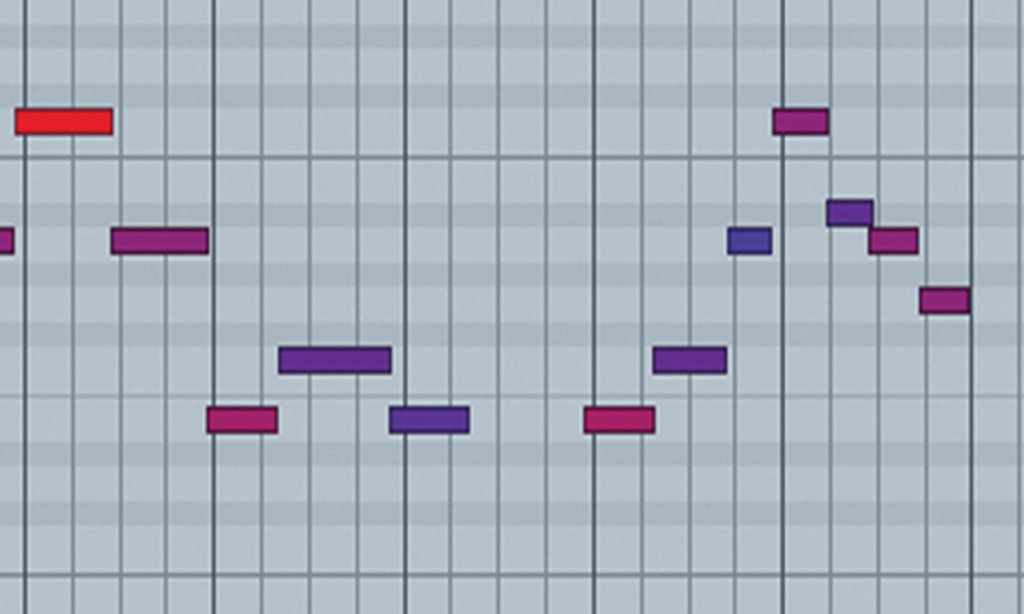 3: The verse needs to naturally transform into the chorus melody without too much of an obvious division. The verse should end with a feeling of unresolved musical tension that the chorus’s chordal and melodic shift should naturally follow. In this melody I’ve opted for a descending sequence of notes that ends on the first note of the chorus.

1: Your chorus melody should generally be in a higher pitch than the preceding verse or pre-chorus melodies. The sonic implication being that a lift or a rise has taken place, we are at the ‘peak’ of our song and that this is (usually) the location of our primary hook. Here’s a brief rising melody for the chorus.

2: When we ascend to the highest note we should then start descending from it gradually. This has a satisfying effect on the human ear, adding drama and resolution to our chorus’s key point. Here’s a melody I wrote a while ago that demonstrates this 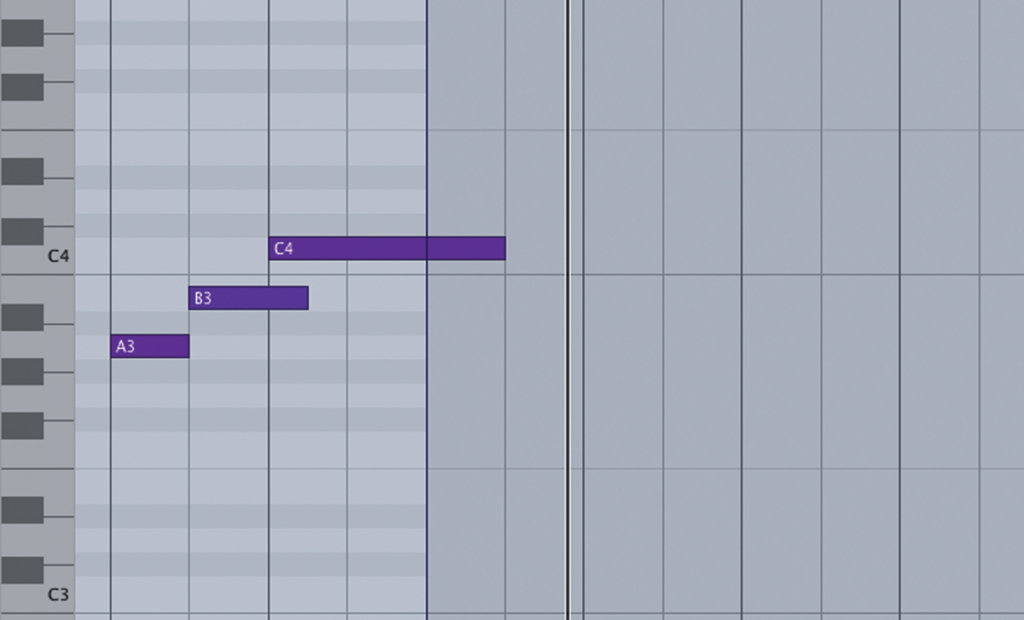 3: Usually the chorus resolves to the tonic note of the key. It’s better to resolve to the tonic in the chorus than in the verse in order to add a sense of completion and give the chorus added musical weight