DAWs aren’t just for making dance music. Rock gets a look in too, as Hollin Jones reveals… When music production software comes bundled with lots of synths and electronic drum machines it’s easy to assume that you’re only supposed to make electronic music with it, but that’s not the case at all. It’s true that […]

DAWs aren’t just for making dance music. Rock gets a look in too, as Hollin Jones reveals… 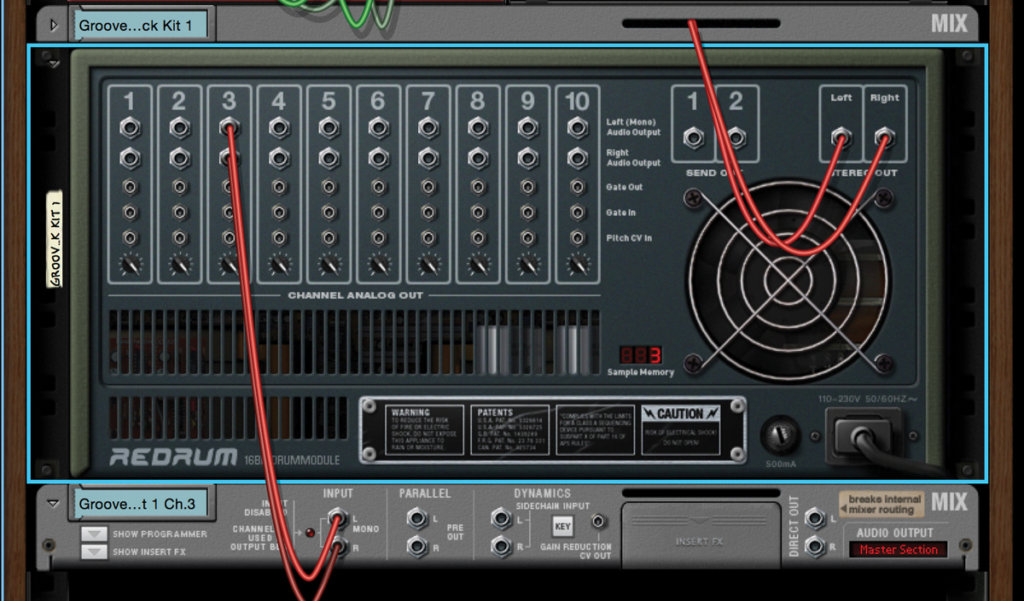 When music production software comes bundled with lots of synths and electronic drum machines it’s easy to assume that you’re only supposed to make electronic music with it, but that’s not the case at all. It’s true that before Reason could track audio it was harder to work with other genres of music because parts either had to be imported as samples or you had to connect over ReWire to another DAW.

Now you can record, program and produce anything you like and that includes styles of music that you might not immediately associate with software or programming.

If you’re making rock or rock-influenced music you might well be recording a full band or a real drummer, in which case you can track audio into Reason just as in any other software and then make edits and mix your sounds. If you’re working on a slightly more limited budget or in a smaller space as many people will be, it’s still possible to create the more resource-intensive parts of a track virtually and then add your own sounds one by one on top of it.

Typically this might mean programming rather than recording multitracked drums using one of the virtual kits available in Reason, or any drum plug-in if you’re in another application. Even if you don’t have a decent guitar amp or perhaps only have a single amp, you can use emulation to ‘fake’ having a much broader palette of sounds. At a pinch you can just plug your guitar or bass into your audio interface and record through insert amp, speaker and pedal effects to get the sound you want. If you record this way, you have the flexibility to alter the effects post-recording.

Drums are one of the easiest instruments to recreate in software form because they have less nuance to their sound than most other kinds of instruments. Reason comes with a good selection of ‘real’ drum kits and, thanks to its clever structure, you can easily tweak and process these as multi-output kits, applying different kinds of effect to each drum channel if you like.

Most dedicated drum plug-ins will have a multi-out feature so you’re not limited to simple stereo unless you’re working with a stereo sampled loop of an entire kit.

Programming rock drums can be done in any number of ways. At its simplest you might use the ReDrum’s built-in step sequencer, although this won’t afford you a massive amount of flexibility for fills and syncopation. A MIDI keyboard or pad connected to your computer will give you a more natural input method, and if you’re really pushing the boat out you could try a MIDI drum kit connected to the computer, though that obviously requires some space to set up.

You might also look at using MIDI clips imported from elsewhere– either commercially programmed loops, REX loops or collaborations with others– then re-mapping them to new kits, tweaking the MIDI parts and so on to make them your own.

Rock beats usually have more swing to them than electronic drums, although where the two cross over there’s a lot of leeway. Listen to anything recent by Kasabian, for instance – ostensibly a rock band – and you’ll hear really dancy drums with metronomic beats that could have come from a machine. So there are no absolute rules, though for more conventional guitar music you probably want to go a little easier on the quantization.

The ReGroove mixer or some other kind of groove quantization can help you here. It’s frequently possible to extract the groove from one MIDI or audio clip and apply it as quantization to another. Using this trick you could perhaps ‘steal’ the groove of a drum sample but apply it to a beat you had created yourself.

Recording guitar or bass riffs is as simple as tracking any audio, though you may well want to take advantage of the recording lanes feature to go over and over a section of music trying different things, then after the recording stops, separate out your favourites and discard the parts that didn’t work.

If a song has already been written you can sketch out a rough version of it to a click and then go in afterwards and compose drums and add other parts such as keyboards, strings or synths over the top, perhaps eventually replacing your original thumbnails.

For ultimate flexibility you could record arrangements into Blocks in Reason and then try alternate versions of an arrangement. Some other DAWs have similar functionality, such as Cubase’s Arranger Track.

The great thing about working in software, if you haven’t already decided on the exact arrangement of a song, is the flexibility it gives you to play around with all the different elements. The traditional intro / verse / chorus structure of rock music can be subverted or indeed adhered to strictly if you prefer. The mixer and effects can be used to balance your sound, perhaps using parallel processing in the mixer to fatten up guitar tracks for a really massive sonic boost. Using the master channel and MClass effects you can get a tight but powerful sound. Software isn’t just for dance music, it’s just as good for rock. 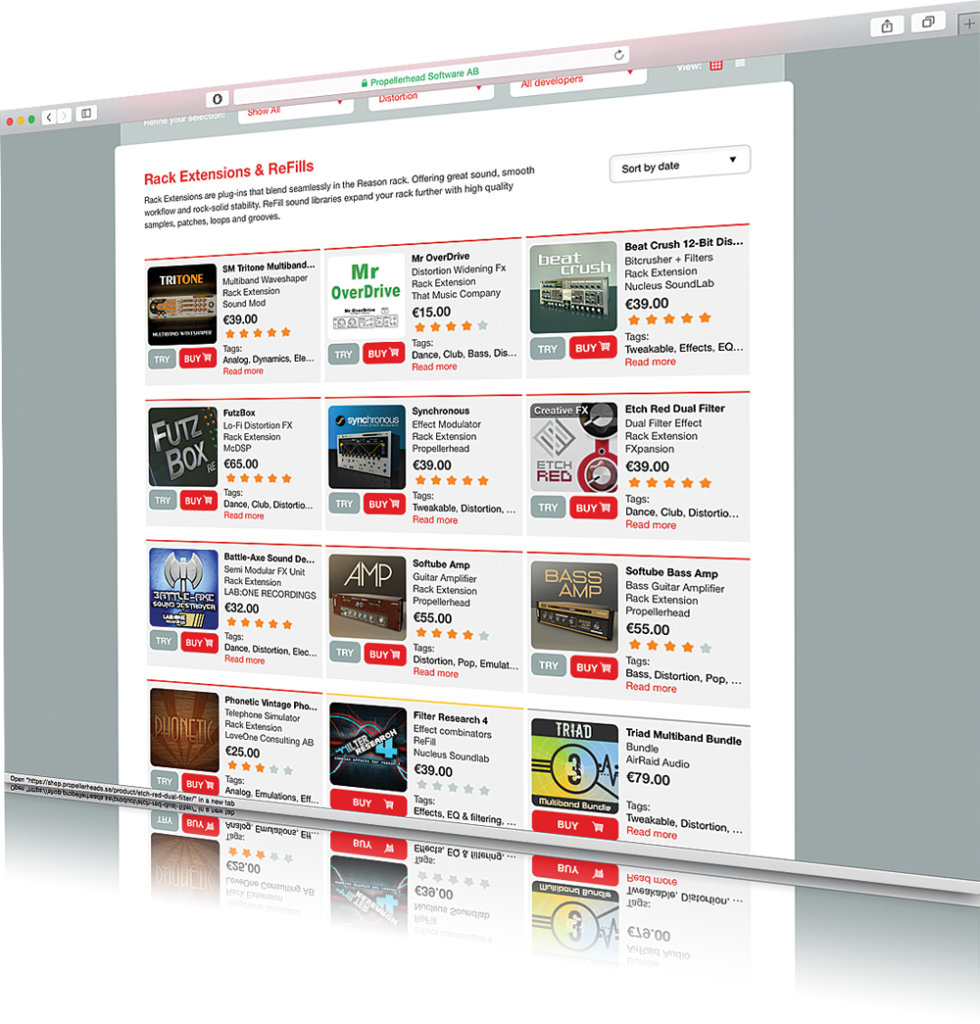 The Propellerhead Rack Extensions store can really be your best friend when you’re looking to go beyond the limits of the tools that Reason comes bundled with. The whole idea is that just like with buying additional VST or AU plug-ins for other DAWs you can add just the specific instruments and tools you want.

If you’re looking at doing a lot of rock production, this might include buying some dedicated guitar or bass effect or amp and speaker emulators, or indeed getting ReFills that contain pre-designed guitar loops, patches or MIDI files. All Rack Extensions are free to try for 30 days so you can experiment before you make any decisions. 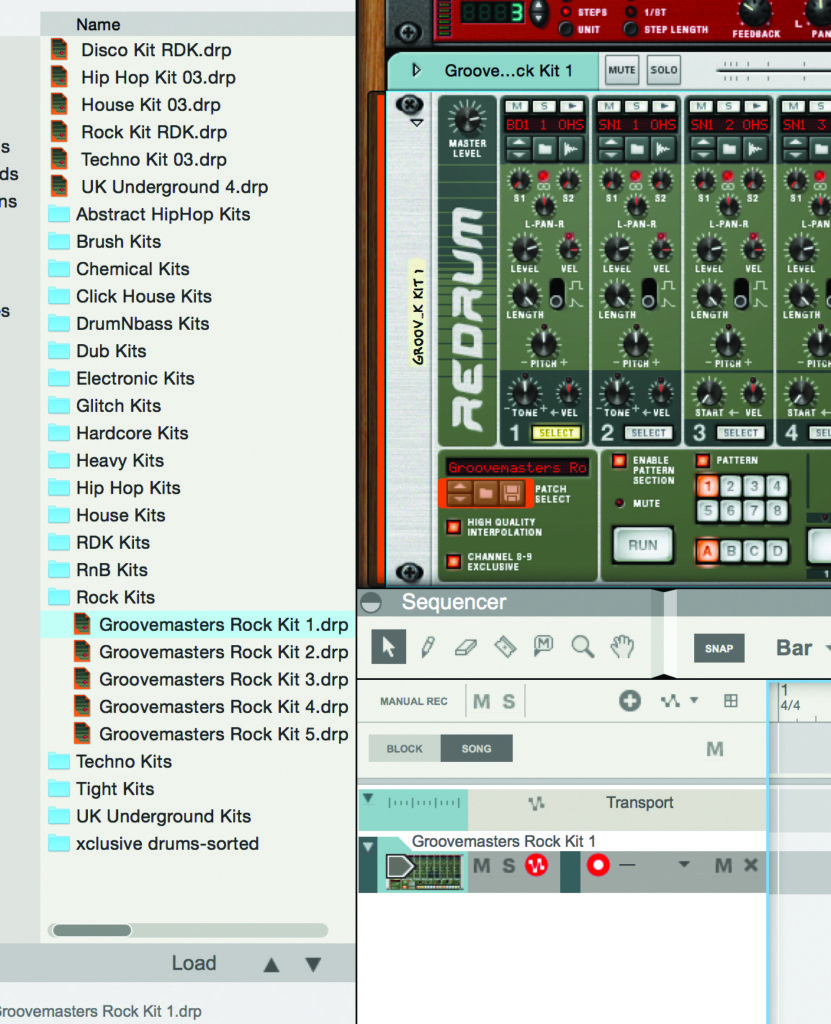 1: Reason has plenty of rock drum kits so call one up, such as the aptly-named Rock Kit. Remember you can swap out any individual drum sound in a ReDrum channel if you prefer, for example, a different kick or snare. 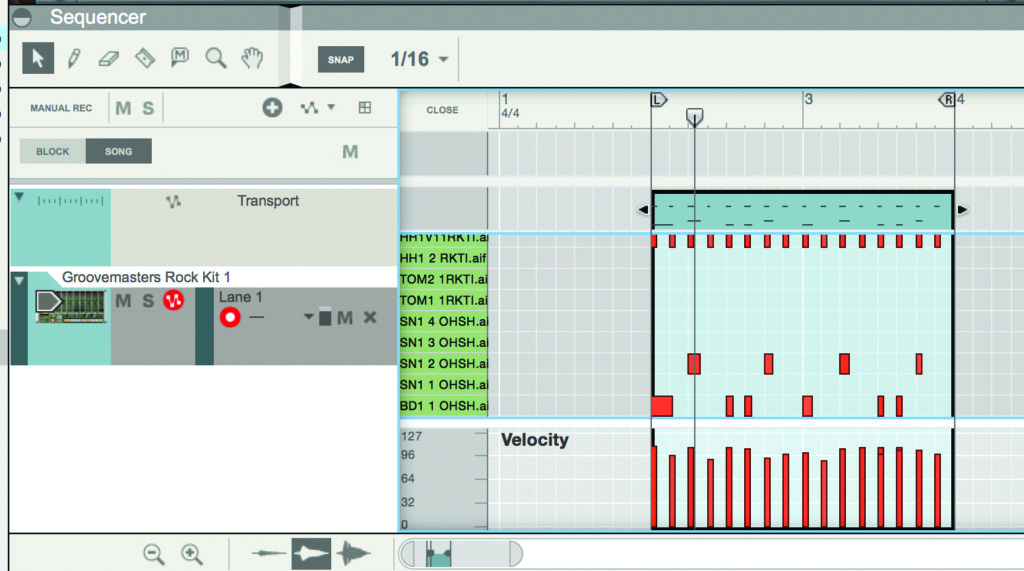 2: Set a tempo of 100bpm and set up a loop. Play in your beat while recording. Here we’ve put in a simple kick, snare and crash pattern that’s quintessentially rock. Add a few flourishes if you wish. 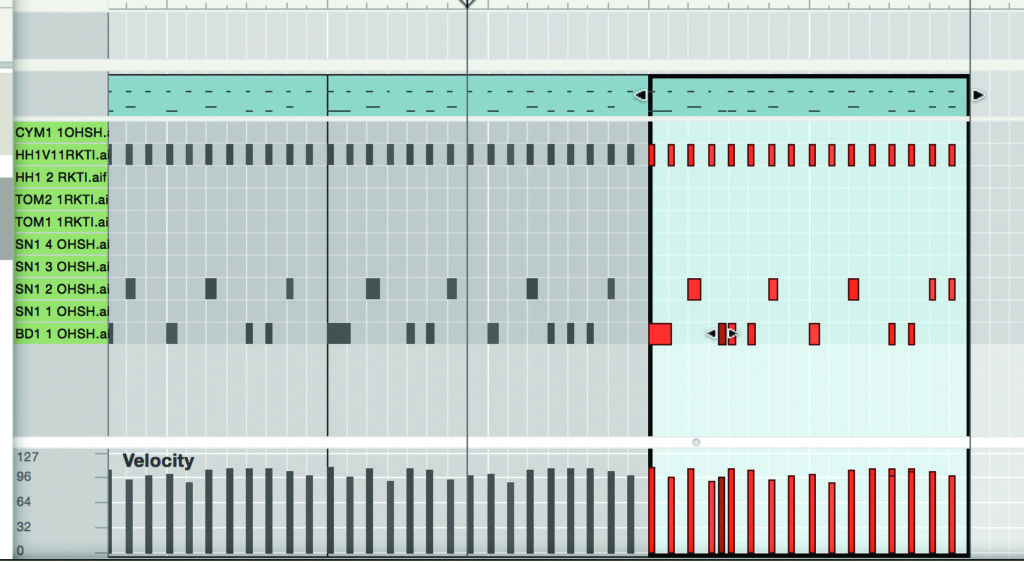 3: Copy and paste a couple of instances of the beat to the right of the first one and then double-click to open in Edit mode. Use Copy and Paste or Overdub to add a couple of extra hits and create a variation or two to keep things interesting.

4: In the ReDrum interface you might want to go in and tweak the drum channels a little. You can use the Length dial for example to make the crash cymbal shorter and less splashy, and the pitch dial to pitch the kick and snare up or down to tune your kit.

5: To get more creative, add a blank Mix Channel which will give you a separate input into the mixer. Hit Tab to spin the rack around and pick up the audio output from your snare channel – here it’s 3 – and route it to the new channel.

6: Name your snare channel and now add a specific effect to that channel using the Insert area of the track module. Try a compressor and reverb to shape your snare sound independently of the other drums. This works for any drum channel.

7: Now set up an audio channel with the correct routing to lay down a guitar or bass riff. You might want to mic up an amp or alternatively go direct in and use insert effects to colour the sound without rendering it on to the recording yet.

8: Lay down a groove or a riff and, if necessary, use the comping tools to go over and over then decide which take was the best. Remember you can alter the effects after recording if you have recorded clean and used insert effects. 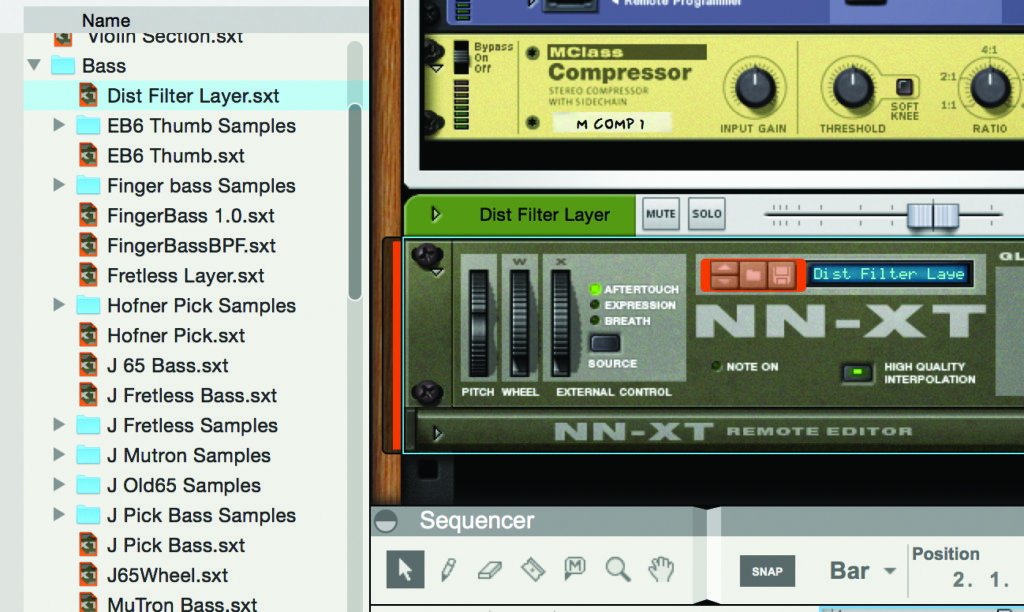 9: Another option if you’re not a guitarist is to use a sample-based instrument, which often works better for basses than for lead guitars. The NN-XT has some decent bass instruments and you can use one of these to build a bassline.

10: A good way to disguise the fact that your rock bass or drums are coming from software is to add some crunch, so here we have added some bass amp and speaker emulation to dirty up the bass, which helps a lot. 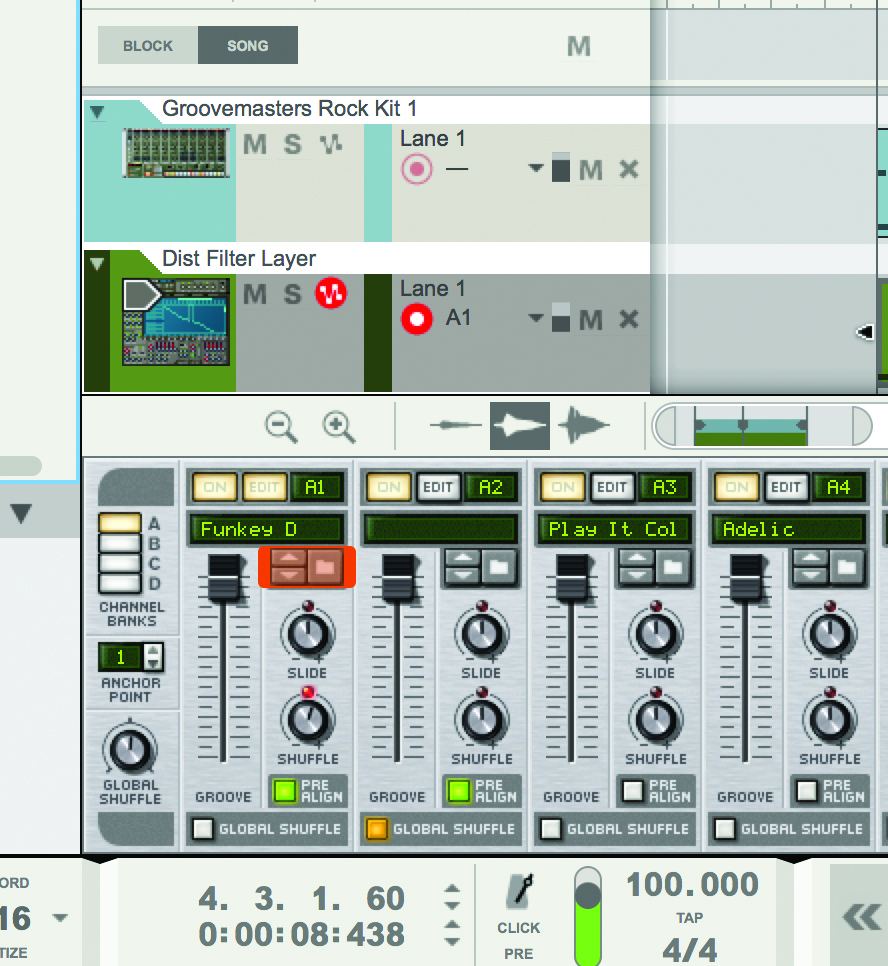 11: Another trick is to use groove quantizing. Try loading up the ReGroove mixer and dialing in a little shuffle and slide to either the drums or bass, or both. You don’t want it to sound too funky, unless of course it’s funk rock! 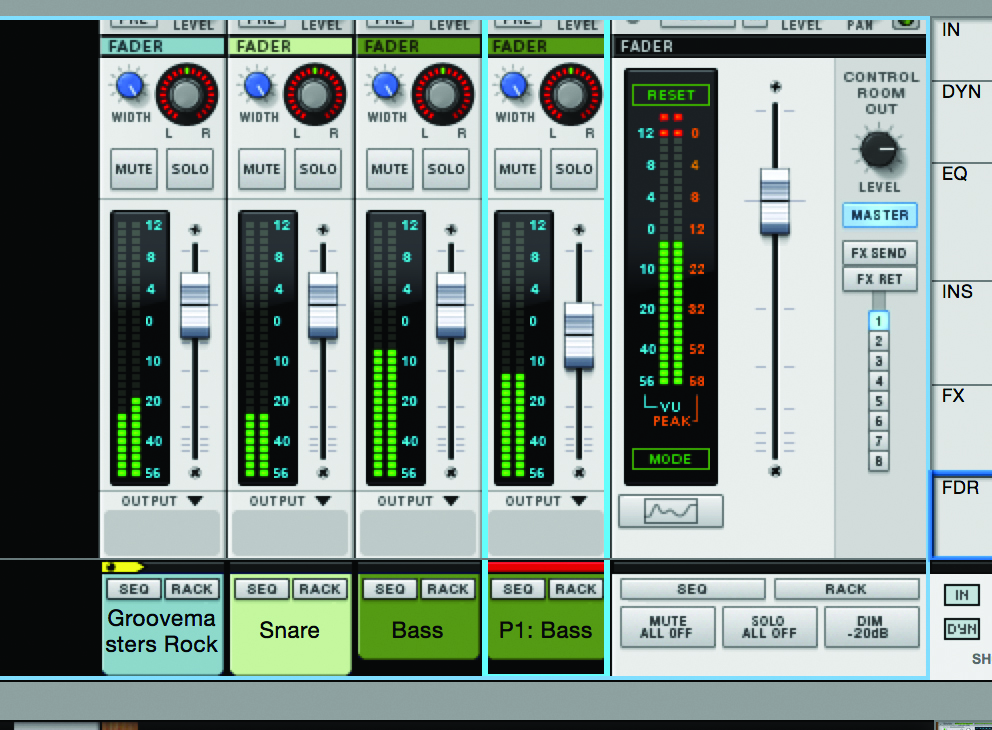 12: When you’ve created some parts, consider adding a parallel channel for guitars or basses and using alternate processing on them, blending them with the originals to fatten up your rock sound.