Reason is blessed with some of the best beat-making tools of any DAW. Hollin Jones gets to grips with them in this Reason tutorial   Reason was one of the first DAWs that made beat-creation really easy and integrated, with the now venerable ReDrum module turning a new generation of musicians on to the idea […] 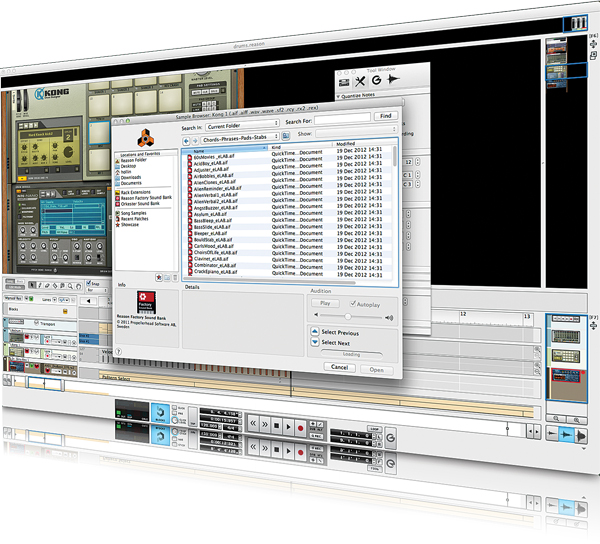 Reason is blessed with some of the best beat-making tools of any DAW. Hollin Jones gets to grips with them in this Reason tutorial

Reason was one of the first DAWs that made beat-creation really easy and integrated, with the now venerable ReDrum module turning a new generation of musicians on to the idea that you didn’t need complex plug-ins or hardware drum machines to make great- sounding beats.

The way it integrated with the sequencer and other Rack modules was a real breath of freshair,and like many of Reason’s tools,it could be used by beginners and advanced producers alike. ReDrum remains a stalwart of Reason’s arsenal and has gained native sampling and sample-editing capabilities, and it has of course been joined by many other modules,mostnotablytheKongDrumDesigner.The clue is in the name here: Kong isn’t simply a sample playback unit, it also enables you to synthesise drums in whole new ways, giving a new lease of life to the beats side of Reason. There’s also the Dr. Octo Rex, which succeeded the classic Dr.Rex and which is also adept with beats and loops. Let’s look at how the tools you have can help you to produce drums even more professionally than you might already do.

We’re not going to go into exhaustive depth about how each module works but we’ll look at how you can make best use of ReDrum, Kong, Dr. Octo Rex and some others to work with different kinds of drum parts. Let’s start with the classic ReDrum, which is a great ‘meat and potatoes’ drum machine for all kinds of scenarios. It really has two significant strengths, the first of which is its ability to load a different sample into each of its ten channels or to let you record in your own samples. Load a preset kit, for example, and you can swap out a couple of sounds to customise it. Press the Sample button on any channel and you can record in your own sound.

Hit the Edit button or go to the Tool window> Assigned Samples section and you can open the waveform and edit it to suit. Each channel can be pitch-shifted, panned and have a variable start point set to tweak the sound. 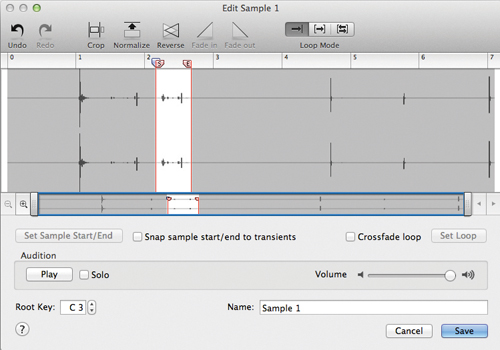 The second cool thing about ReDrum is its onboard sequencer, which is particularly good for working with electronic beats since it gives you an old-skool, step-style way of working. Select a drum channel and the 16 pads can be pressed to trigger that drum at any point, with the Run button giving you a way to build patterns independently of the main sequencer. The hard, medium and soft accent controls can be used to change the velocity of notes, and the Flam control to add short,snare-style repeats.

Patterns can, of course, be copied and pasted between any of the 32 onboard slots and converted to regular sequencer data using the Edit>Copy Pattern to Track command. 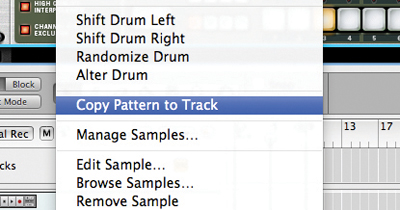 As with the Dr. Octo Rex you can also program pattern changes in the ReDrum by drawing blocks of data into the main sequencer’s Pattern Lane. Last but certainly not least, if you spin the Rack around you will see that each of ReDrum’s ten channels has an independent stereo audio out so that any drum sound or sample can be routed to a separate effects unit or chain. So you might, for example, want to send your snare through some crunch and reverb and your hi-hats through an exciter, but keep the kick drum dry.

By doing some simple routing you can achieve this, and each channel also has Gate CV in and out for controlling the parameters of other instruments based on hits triggered by the ReDrum. In fact, you could even route any drum channel straight to Reason’s main mixer if you wanted to take advantage of the excellent channel strips and mix in a more traditional, studio kind of way.