In the second part of his beat programming and sound design series Hollin Jones build his own beats from scratch. And it’s easy…! Drum synthesis isn’t new, in fact it was way back at the turn of the 1980s when Roland released the TR-808 as a cheaper alternative to the rudimentary sample-based drum machines of […] 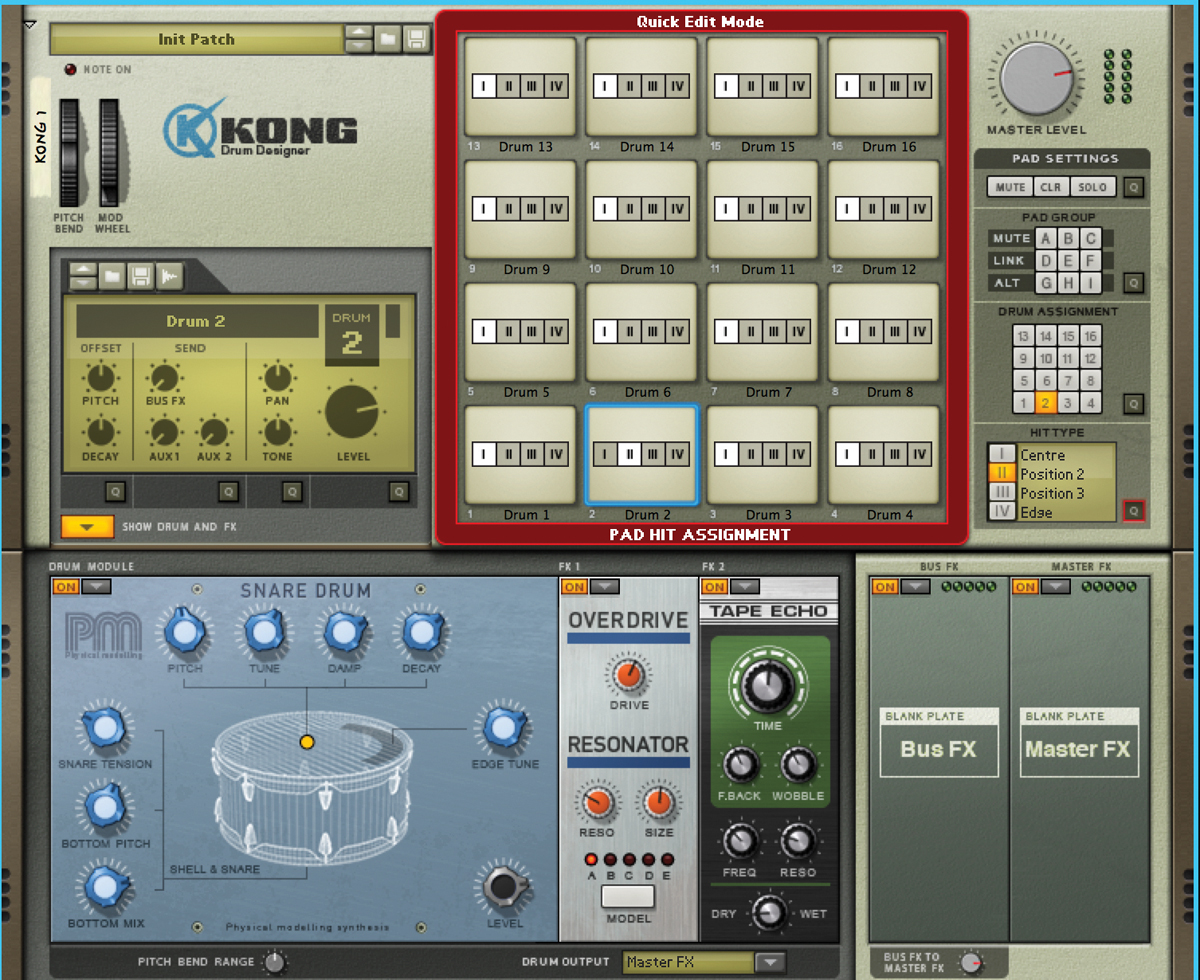 In the second part of his beat programming and sound design series Hollin Jones build his own beats from scratch. And it’s easy…! 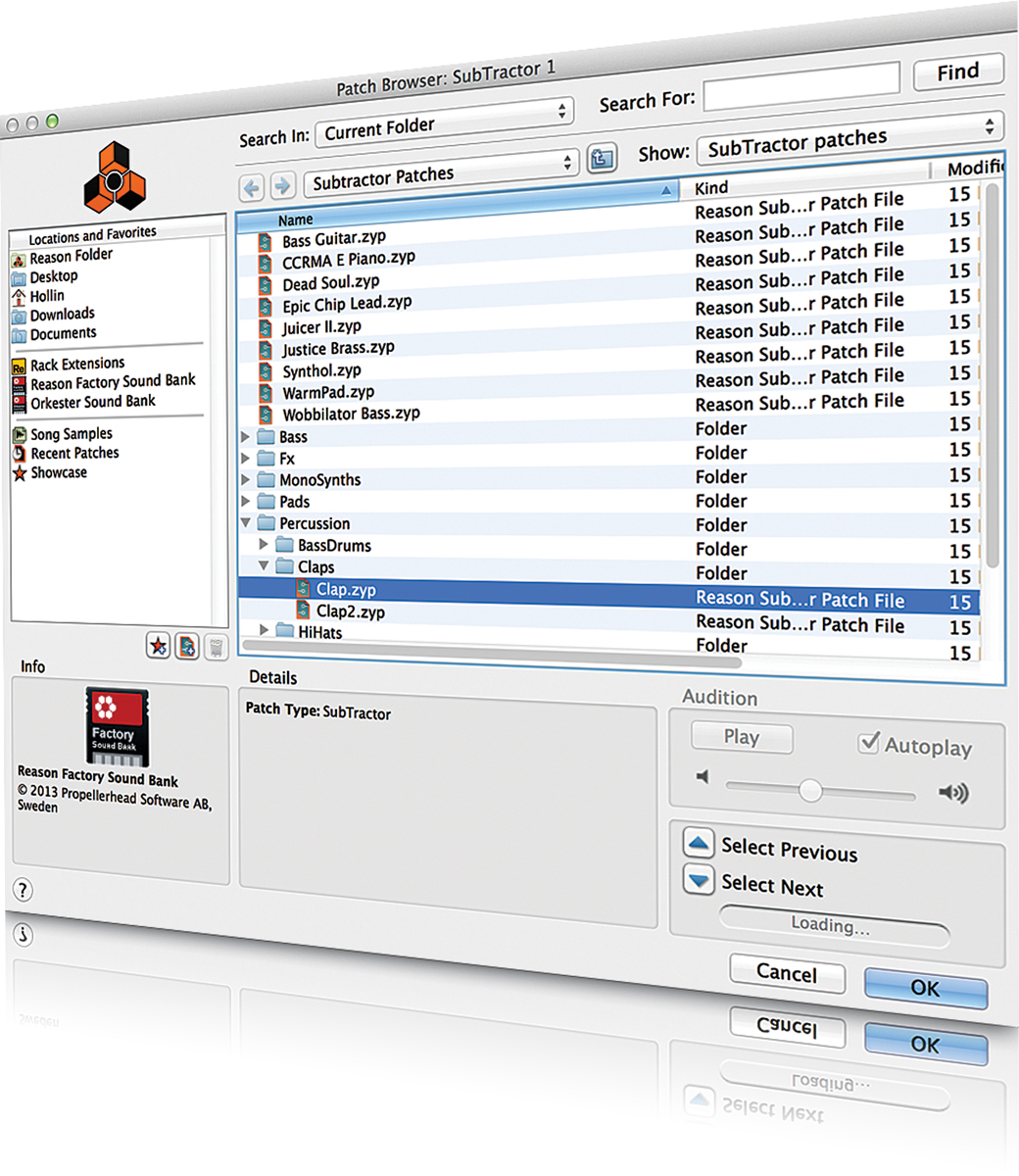 Drum synthesis isn’t new, in fact it was way back at the turn of the 1980s when Roland released the TR-808 as a cheaper alternative to the rudimentary sample-based drum machines of the day, such as the LinnDrum.

At the time, people didn’t know what to make of these ‘artificial’ drum sounds but they quickly caught on, and as electronic music came of age in the 80s, synth drums were clearly here to stay. The fact that they didn’t sound like real acoustic drums became their main selling point.

With software, everything got easier and virtual instruments brought drum synthesis to the world of computers. Reason always had the ReDrum, but later also gained the Kong Drum Designer, a much more synth-focused beat platform with an emphasis on creating sounds from scratch rather than just tweaking samples to make drum parts.

Drum and percussion sounds are particularly well suited to being generated by synthesis because they tend to be short, percussive and attack-heavy – all things that suit waveforms and filters. The technology to make synth drums is far easier to use than the science behind synthesizing horns or pianos, for example.

Reason’s self-contained design and popularity with the dance crowd meant that Kong was very well-received and could be seamlessly integrated into the rack with features such as full CV support, separate channel output routing and so on. It’s also incredibly friendly to use for sound design, unlike some other drum synthesizers, with sixteen pads, each one able to hold a drum generator module. In reality some of these can be sample-based so it’s not purely synthesized, though you can make synth-only drum patches or mix and match the two.

King of Kong
The genius of Kong is that you really don’t have to be a synth expert to build your own custom drum kits. The modules are all freely swappable and their controls are straightforward. At worst, you can just tweak things until you get a sound you like. For more control, concentrate on pitch, tuning, damping and other parameters and then use the onboard effects slots to process each drum sound individually and the buss effects to shape the overall output of the module.

There’s more to Kong than just designing drum hits. The pad grid has a system of quick controls that enable you to control mute and solo, and assign different drums to specific pads to ‘break’ the conventional layout of pads. Certain pads also have multiple Hit Types, meaning you can control the way a pad is struck by setting, for example, a centre snare hit or an edge or off-centre strike.

It’s possible to make other settings per-pad, including level for submixing a kit before its signals are sent out to the mixer, pan, tone and pitch, buss and aux send effect levels. As previously mentioned you can also split any channel off manually for separate audio processing.

Going Further
If you’re looking to get even further into drum synthesis it’s not just Kong that can do it, even though it’s Reason’s dedicated drum synth. Many other synths from many DAWs can make percussive noises, with Thor, Subtractor and Malström all capable of using their oscillator and filter banks to do the job.

This is true of almost any synth: as noted earlier, rhythmic sounds are particularly good to synthesize, and playing with attack and decay times, oscillators, filters and LFOs can yield some great electronic beat components. The Rack Extensions store is an excellent source of more specialised third-party modules for achieving this kind of stuff too.

Synth drums are great because they are much easier to shape and control at a fundamental level than sampled drum noises. When you control the waveforms that are generating the sound and the filters that are shaping them your mastery over them is total.

You can also make sounds that are pretty extreme: kick drums deeper and longer than anything a real bass drum could ever manage, snares that are sharper and crunchier than a real snare drum, plus, of course, the classic electronic tom sound that’s not much like a real tom but is a staple of 1980s drum production. Hi-hats can be spitty and sharp, and overall the drum sounds are consistent and uniform.

Programming them is also a slightly different affair to working with real drums. They tend to respond better to a more mechanical, sequenced approach, as was always the case with early drum machines. Reason has pattern sequencers, drum and pattern lanes and can accept MIDI input from an external MIDI sequencer, either in hardware form or as a VST or AU plug-in running in a ReWire host such as Logic or Cubase. Or via USB from a hardware pad or other input device.

Ultimately, using synth drums can be a great way to go beyond more conventional drum parts, to build and shape completely unique kits and sounds and make something that is completely your own. With dedicated synth plug-ins, most DAWs should make that way easier than you might have imagined. 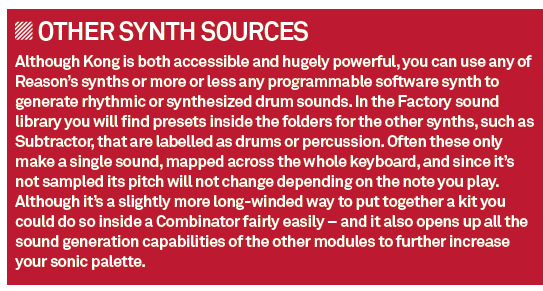 Creating Your Own Drum Sounds 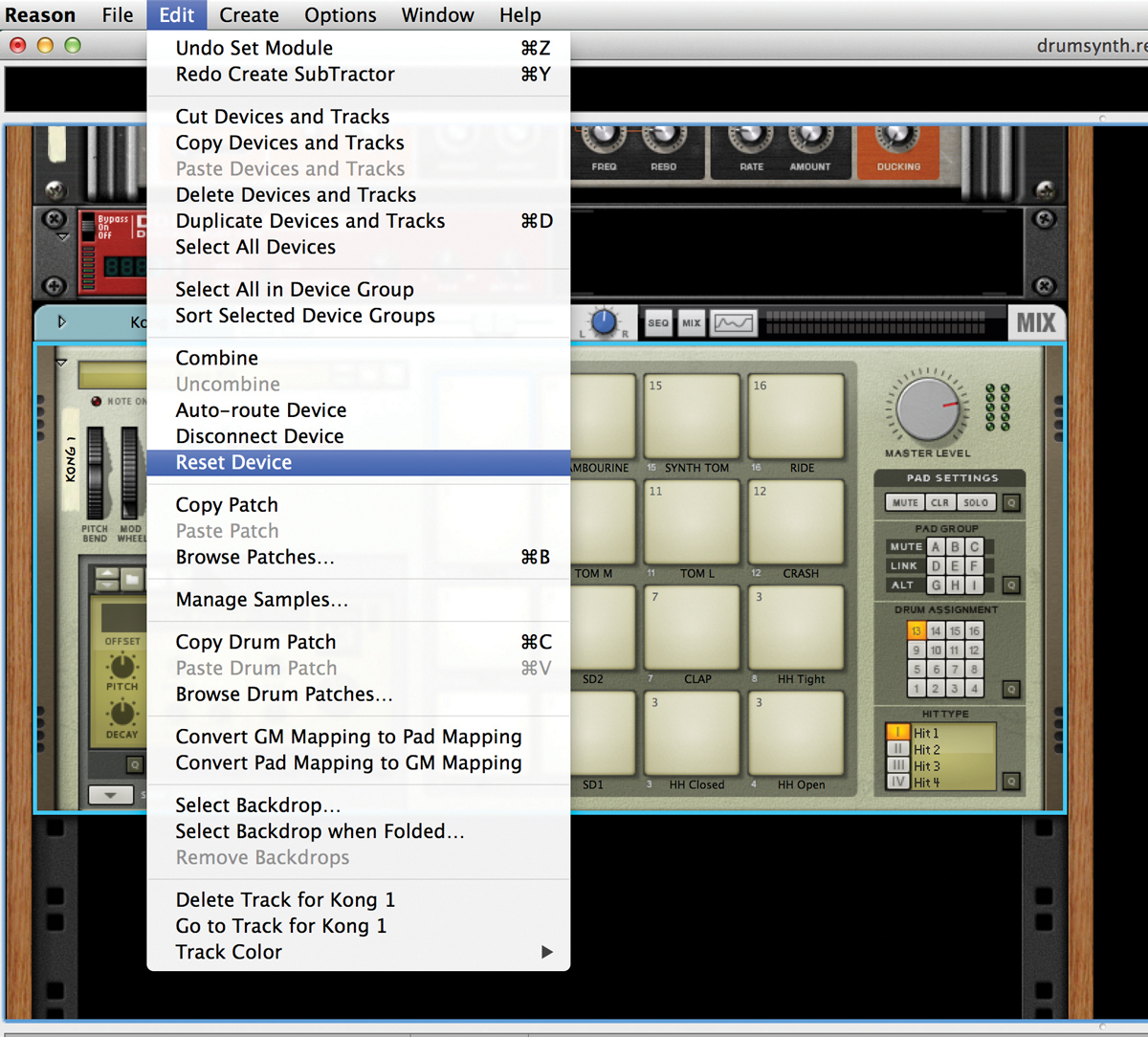 1: Load an instance of Kong and you’ll find it has a preset patch already loaded. With the module selected, go to Edit > Reset Device and all settings will be cleared out so you are free to start designing your own drum kit. 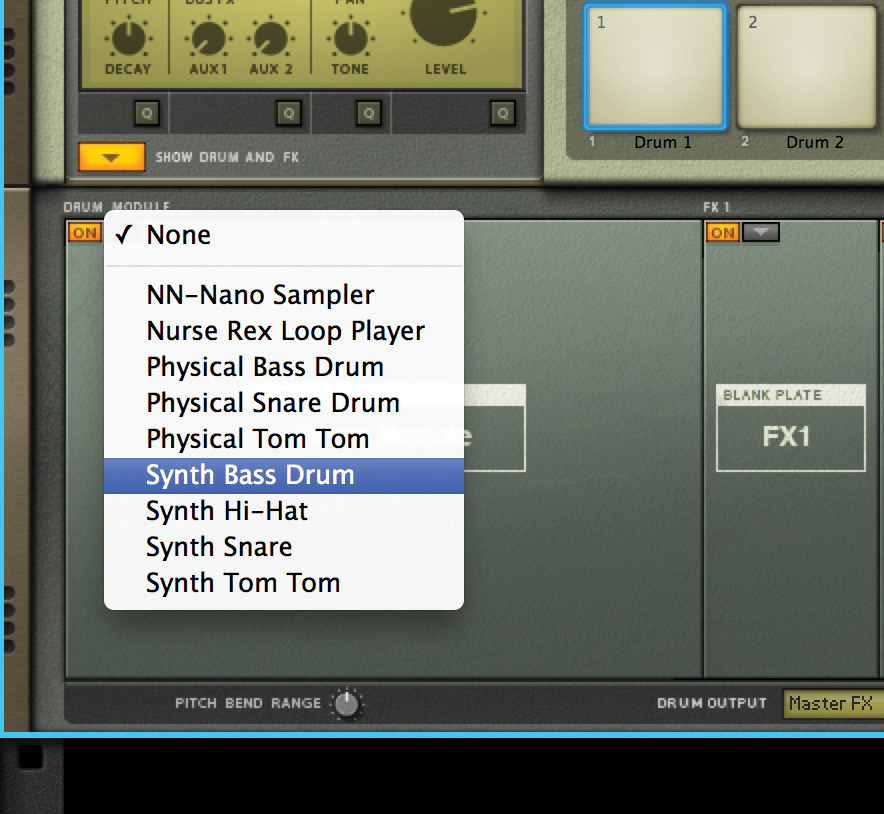 2: Click the Drum 1 pad, then click the Show Drum and FX button to open the module area. From the Drum Module area, click on the Selector menu and choose a generator type. Here we have chosen a Synth Bass Drum. 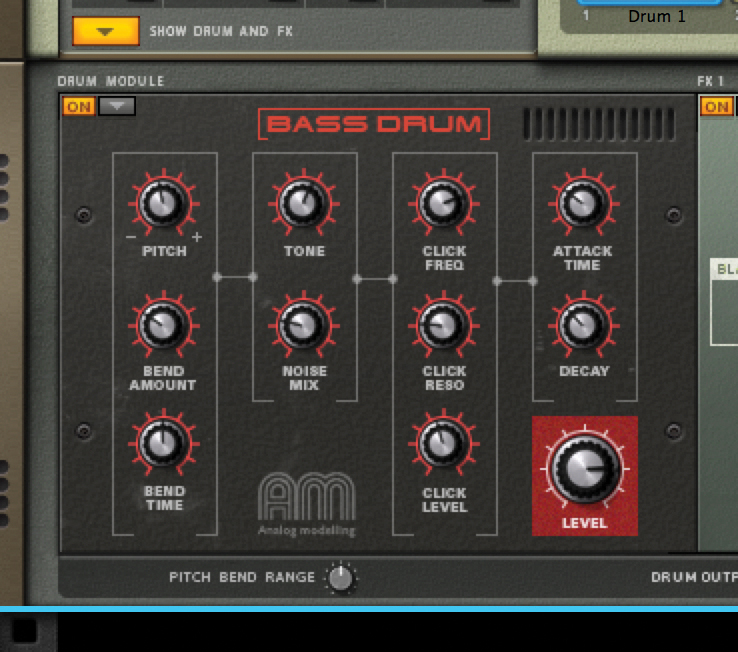 3: Hit the pad or press a key to trigger the sound. Use the knobs on the generator to control pitch, tone, click parameters and attack and decay times. You can easily design a cool-sounding kick drum sound. 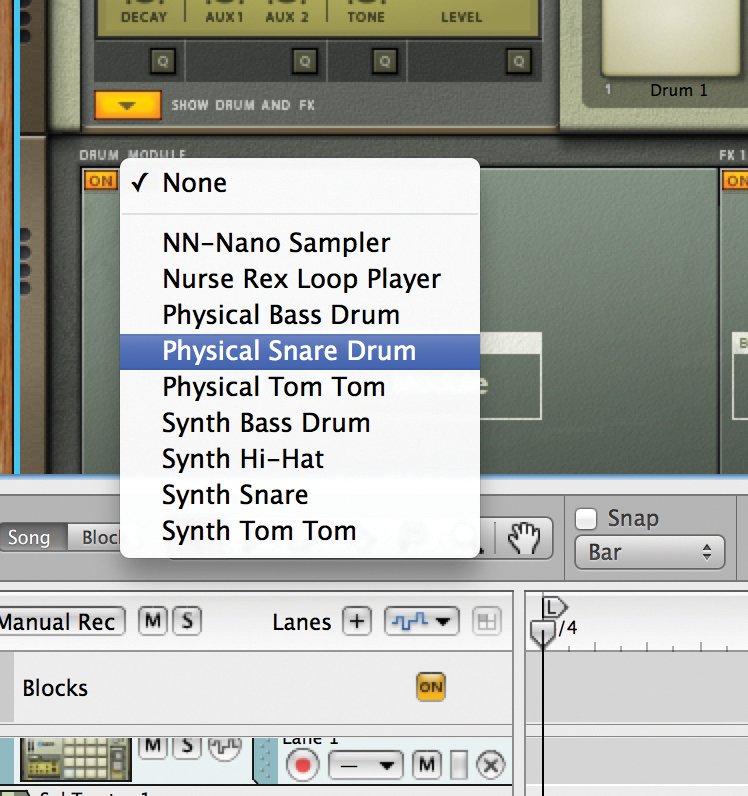 4: Move on to Pad 2 and this time select a snare module. Here it’s a Physical Snare Drum, and you can alter the pitch, tuning, snare tension and how much signal from underneath the snare is included in the signal. 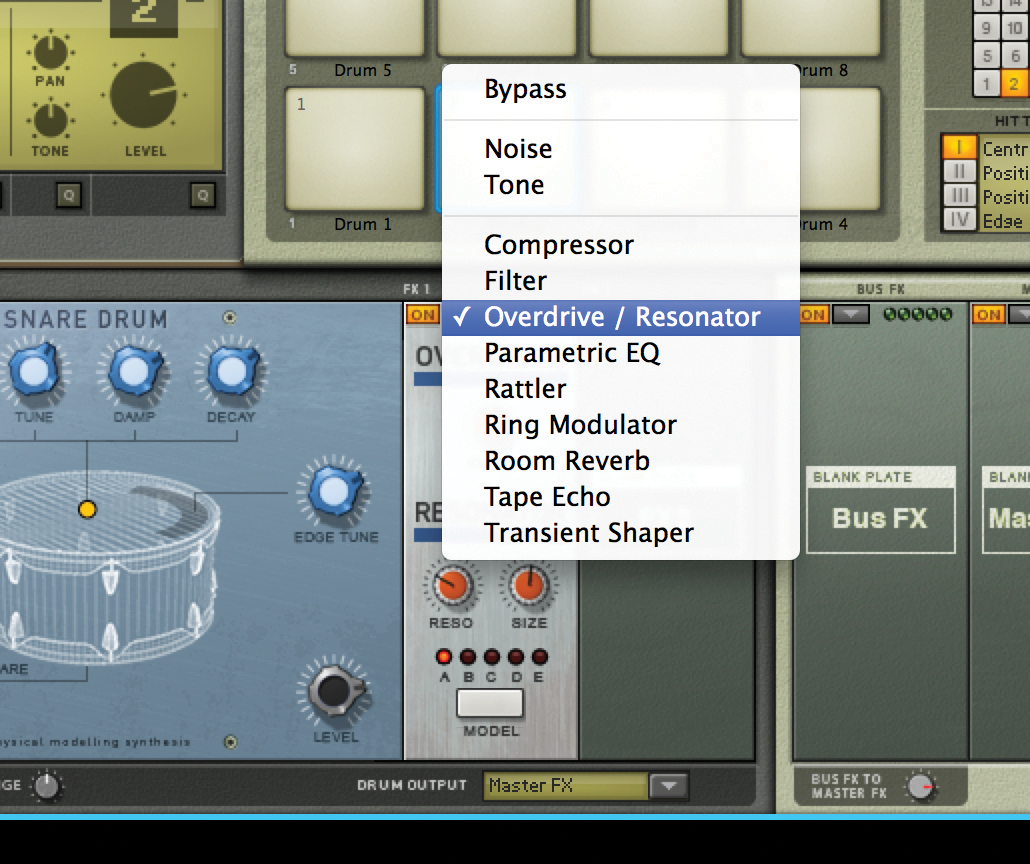 5: Move to the FX1 slot for the snare module and use the menu to add an effect. We’ve chosen an Overdrive / Resonator unit and dialed in some drive and resonance to give the snare sound more bite and power. 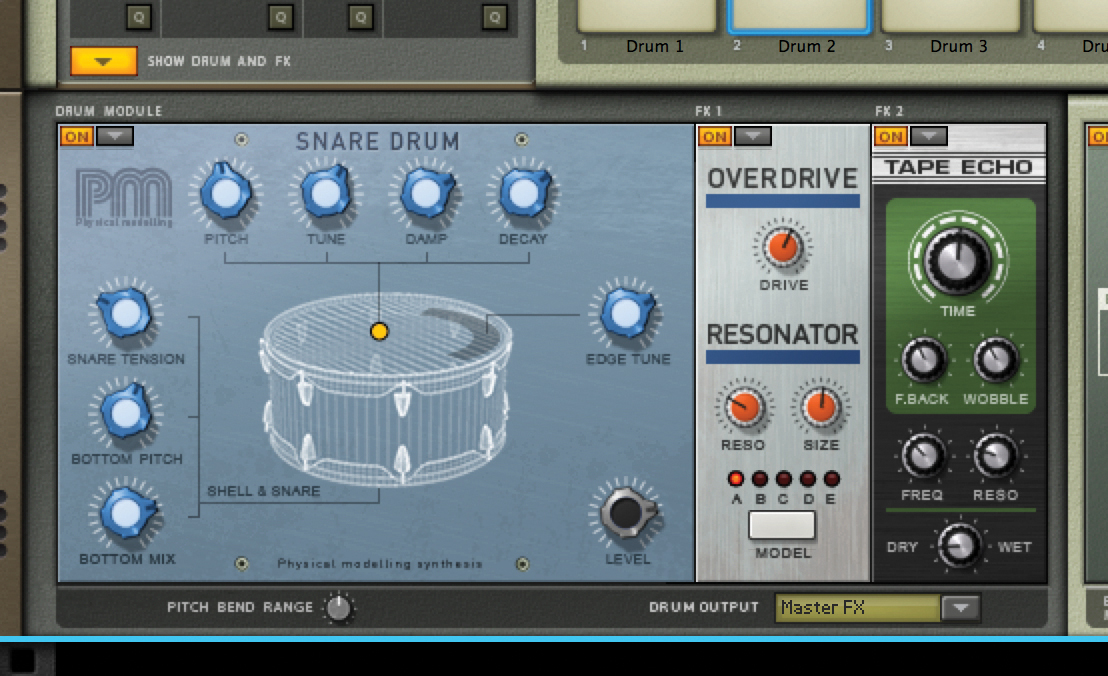 6: Repeat for the second FX slot if you like to add more processing. We’ve chosen a Tape Echo unit and modified the feedback and dry / wet level to create a pleasing dub-style echo on the snare, which remains tempo-synced. 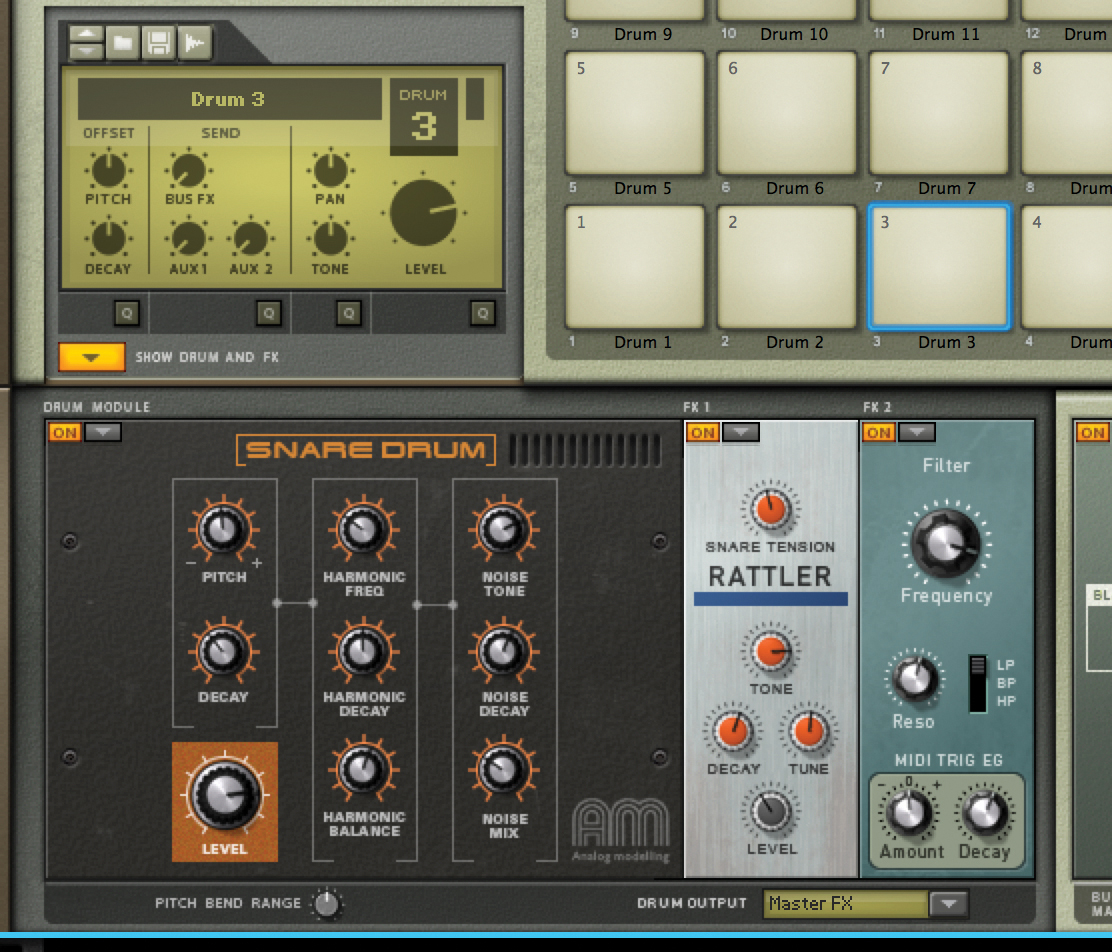 7: Do the same for as many of the remaining drum pads as you like to continue creating the kit. You can have as many snares, hi-hats, kicks and toms as you like, so maybe consider using two or three different snares within a kit for variety. 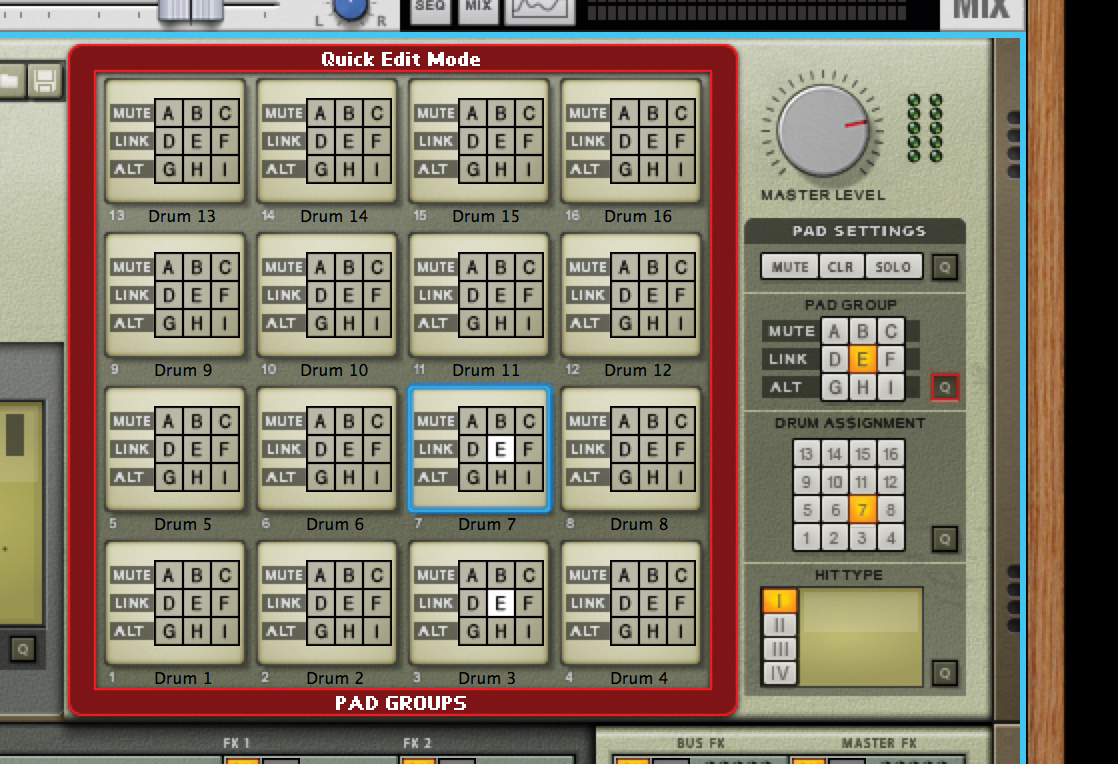 8: In the Pad Group section, hit the Q button to open Quick Control view and you will be able to control link, mute or alt settings for any pad. For example you can use this to make one pad, when struck, also trigger another pad.

9: Some drum types have multiple hit types available such as centre or edge snare hits. Open the Quick Controls for this section and you can assign hit types quickly for any pad at a glance across the whole grid. 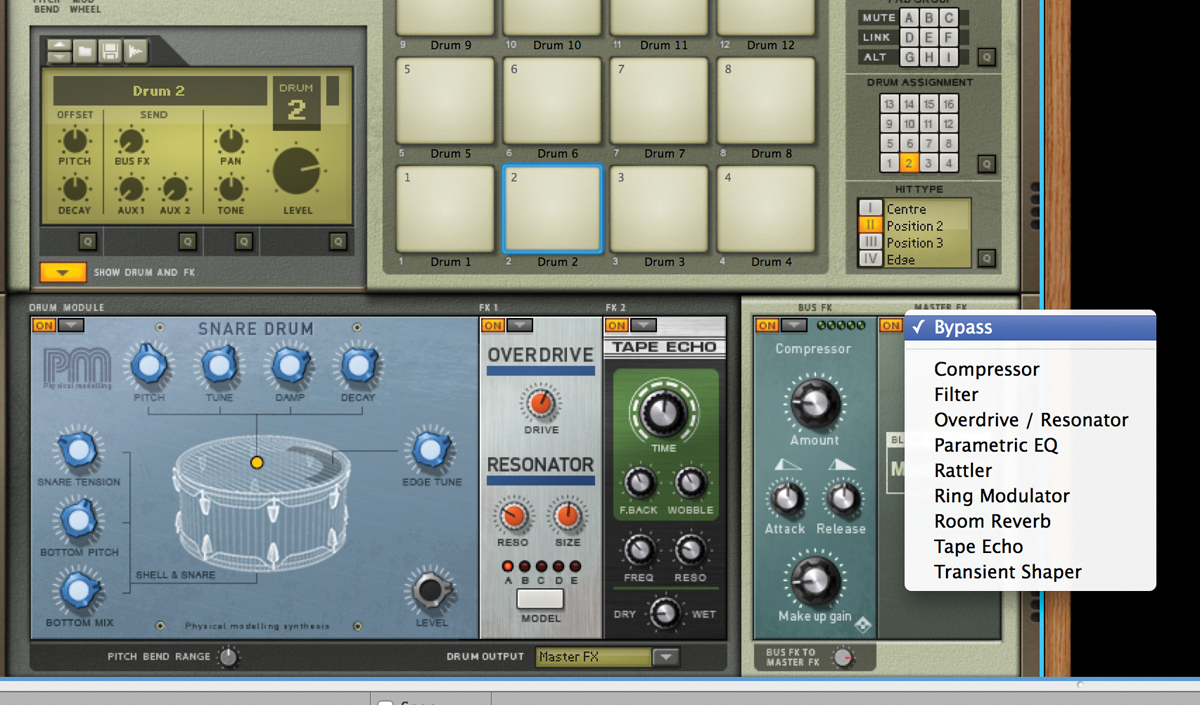 10: In the Buss and Master FX slots you can assign effects to process the whole signal. Buss effect send levels can be controlled per pad in the main LCD area of Kong at the top left. Aux levels relate to any connected aux effects you may have added. 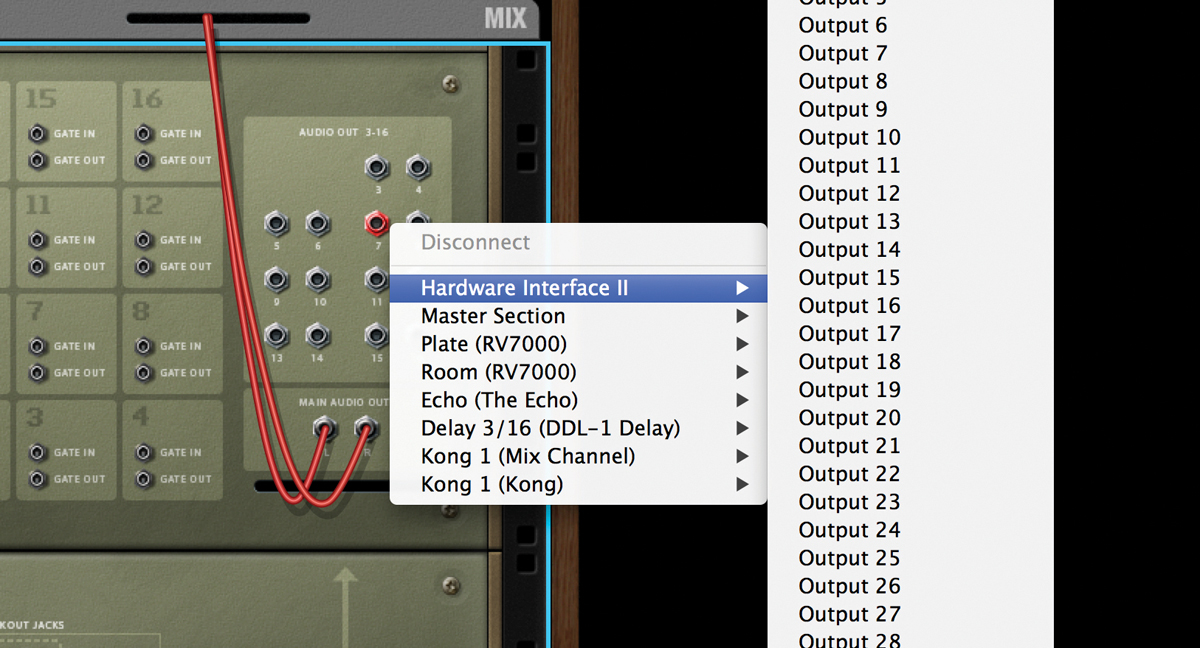 11: Hit Tab to spin the rack around and you will see individual channel outputs for all 16 modules in Kong. Pick any of these up to route it manually or right-click to see a list of available destinations anywhere inside the project. 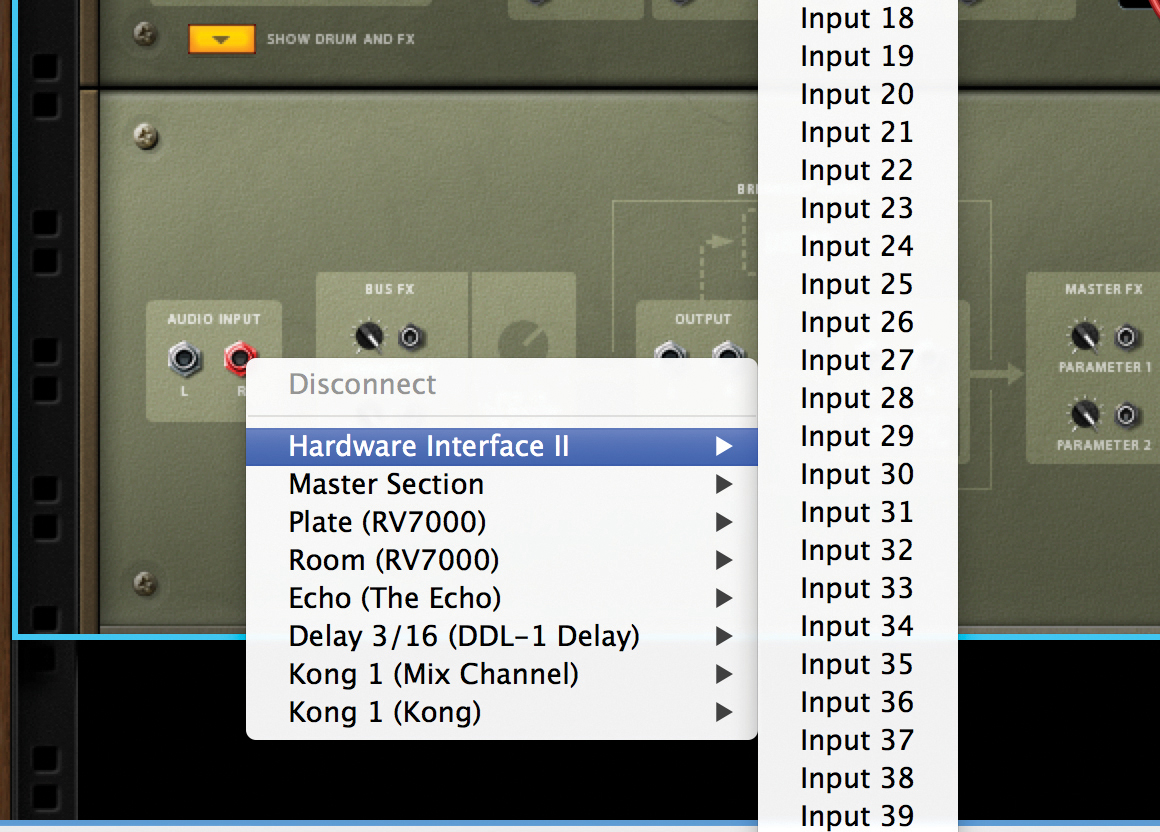 12: Kong can even process external audio signals. From the rear panel, right-click on the Audio Input jacks to direct sound from anywhere else inside the Rack into Kong’s effects. Reason will only let you patch together compatible ports so it’s safe.