Thanks to Reason’s excellent bundled instruments – not to mention Rack Extensions – you’ll never be short of top-drawer sounds. Hollin Jones hits the right notes. Reason pretty much redefined the way in which many people thought about running virtual instruments. At a time when plug-ins and DAWs could be generally unstable and prone to […] 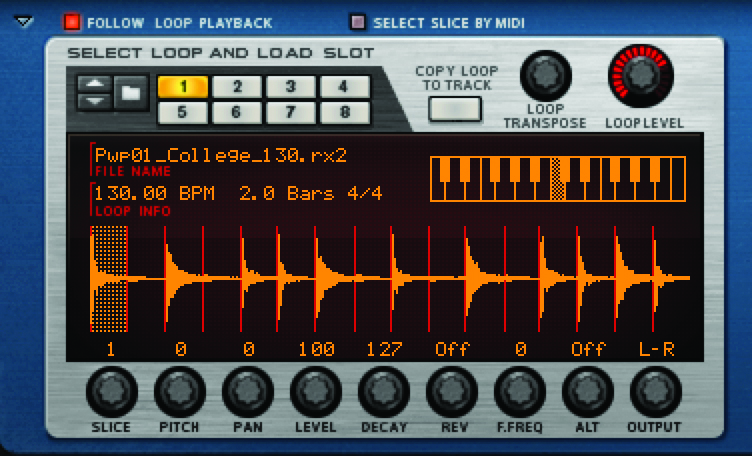 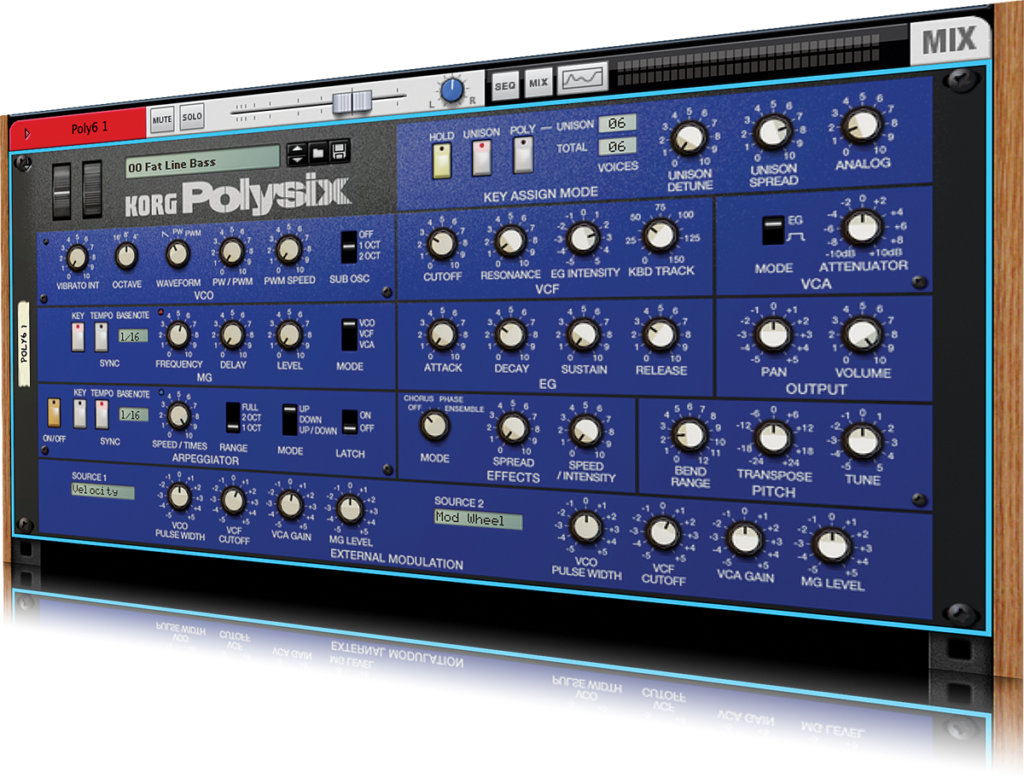 Reason pretty much redefined the way in which many people thought about running virtual instruments. At a time when plug-ins and DAWs could be generally unstable and prone to crashing, Reason kept everything in-house, not supporting external instruments but also thereby avoiding many of the stability problems that existed elsewhere. It boasted its own instruments – synths, drum modules and more – and you could load up as many as your computer could handle.

Back then, the selection of instruments that came with Reason was much more limited than it is now, although it was still a really exciting new way of approaching music-making. In Reason 7 you get a ton of amazing ways to generate sound, but Propellerhead has been careful not to duplicate types of instrument just for the sake of being able to say it’s giving you more stuff – the ReDrum and Kong drum modules, for example, are very different, as are the Malström and Thor synths. Each has its own unique characteristics, but all clearly belong to the Reason family.

There are even instruments within instruments, so by using the Combinator you can build complex, layered and split multi-instruments that are playable from a single MIDI device. By combining different modules and adding effects, submixing and routing, the Props gave you a means to use the existing instruments in a much more interesting and experimental way. And then, of course, there are Rack Extensions, the most recent addition to the Reason toolbox and the answer to the ‘plug-ins question’. Now you can add third-party modules to the Rack without fear of stability issues thanks to the RE system.

Reason covers all the bases in terms of sound-generation, with synths, samplers, rhythm modules and even a MIDI-out device for triggering any MIDI hardware you might have lying around your studio. And you’re not limited to the factory sounds, as good as they are. You can tweak to your heart’s content, export, import and share presets, plus add more sounds using any of the thousands of ReFills and other sound packs on the market. For sound-generation, therefore, Reason is certainly pretty hard to beat. 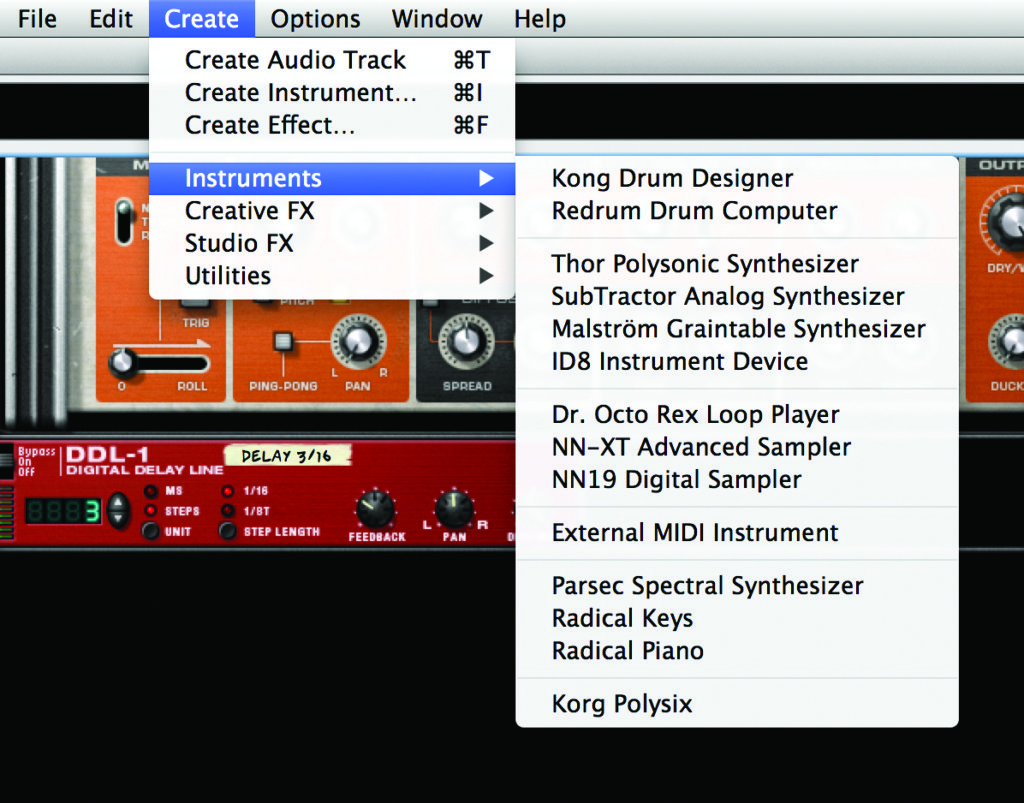 1:  Add an instrument to the Rack by right-clicking anywhere in an empty part of it or by selecting Create>Instrument from the top of the screen. From the Instruments menu you’ll see that the modules you have on your system are grouped by type. Try adding one. 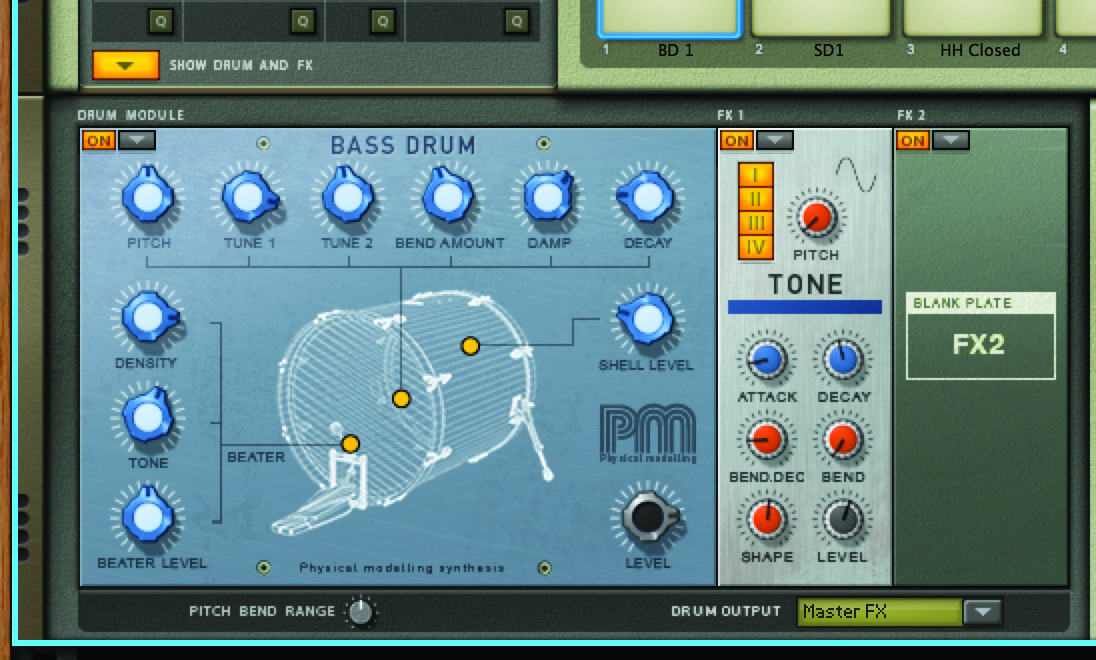 2: The first two are drum instruments – the ReDrum and Kong Drum Designer. ReDrum is sample-based and enables you to swap the sound loaded into any of its channels (or, indeed, sample a new sound directly into a channel). Kong uses a mixture of synthesised and sampled hits, giving you more control over some aspects of the sound.

3: The next category of instruments is the synths – Thor is especially good for creating big, complex sounds. It actually has a built-in step sequencer for programming sounds that have movement, plus a cool modulation matrix that lets you route mod sources to many destinations within the synth. 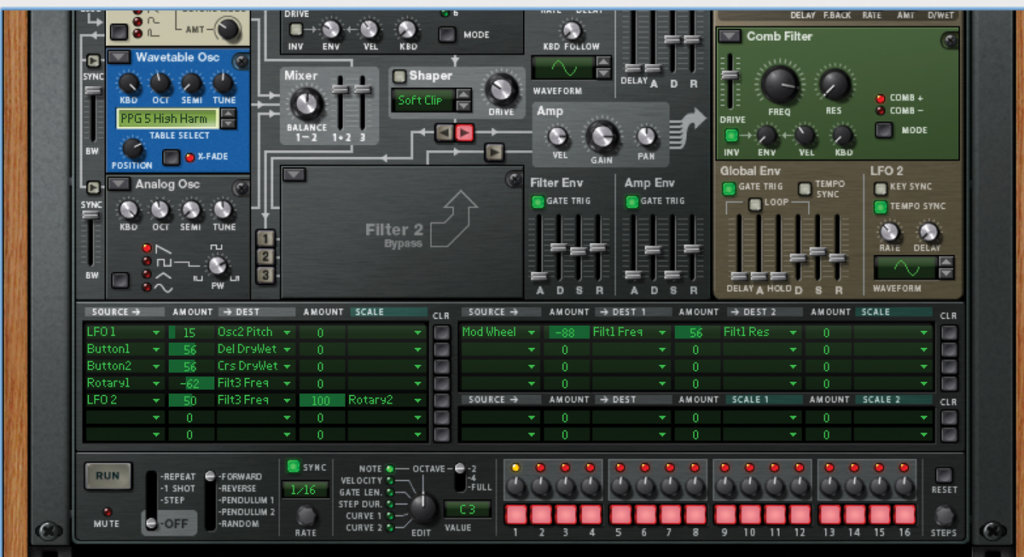 4: The Subtractor is one of Reason’s oldest modules and while it may seem a little basic by modern standards, it’s great for old-style acid bass lines and other retro electronic sounds. It’s also quite simple to use, so it’s a good way to learn about the building blocks of synthesis and how sounds are generated.

5: The Malström is good for more ethereal, pad-like and weird sounds. Its two oscillators can be set to use robotic, vocal-style waveshapes and these can be shaped and filtered to further alter the sound. The synth also accepts an audio input so you can route vocals, guitars and other sources through its processing sections.

6: The Dr. Octo Rex is a bit of a monster and allows you to load up to eight separate REX loops into one instance (previously, you’d have needed eight separate modules to do this). In fact, thanks to the new audio-slicing technology in Reason 7, you are able to slice up audio clips and send them straight from an audio track to a Dr. Octo Rex, which is really useful.

7:  Dr. Octo Rex is capable of much more than simple loop playback. If you expand the controller section you will find features for tweaking any slice of any loop, with the knobs along the base controlling parameters such as pitch, pan, reverse, level, filter and more. You can therefore really spice up even ordinary-sounding loops to make the sound more interesting. 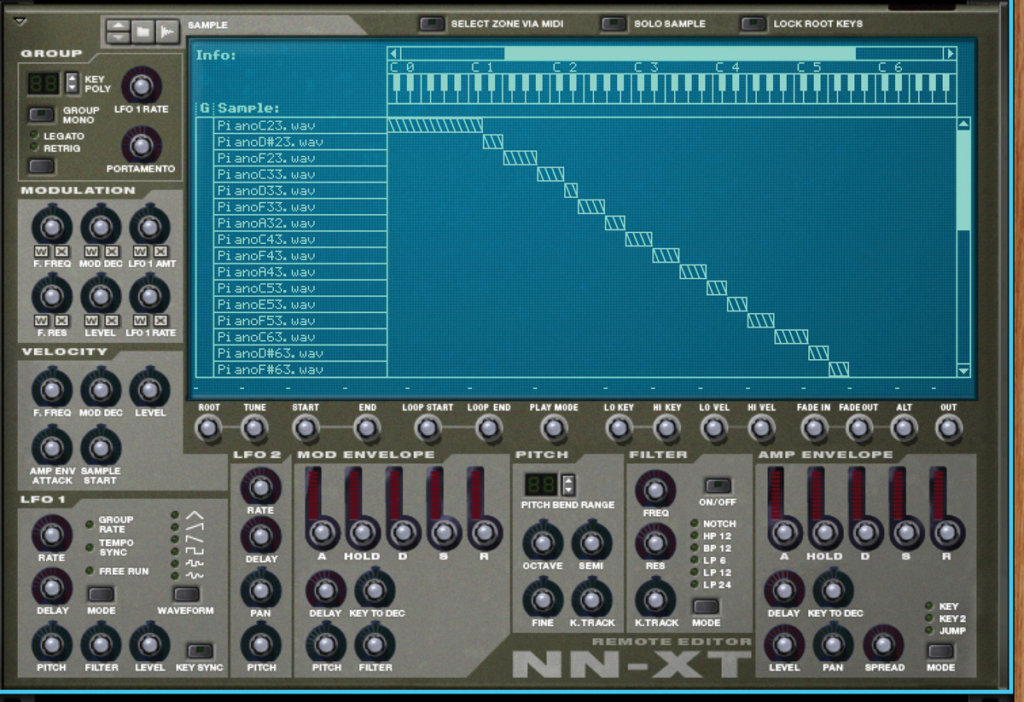 8: In its most basic guise, the NN-XT is a sample-based playback instrument with conventional sounds covering pianos, strings, woodwind and so on. Expand its controller section, however, and you will find the beating heart of a powerful, multi-layered and very capable sampler. Tweak the assignment and behaviour of any sample linked to any MIDI note. 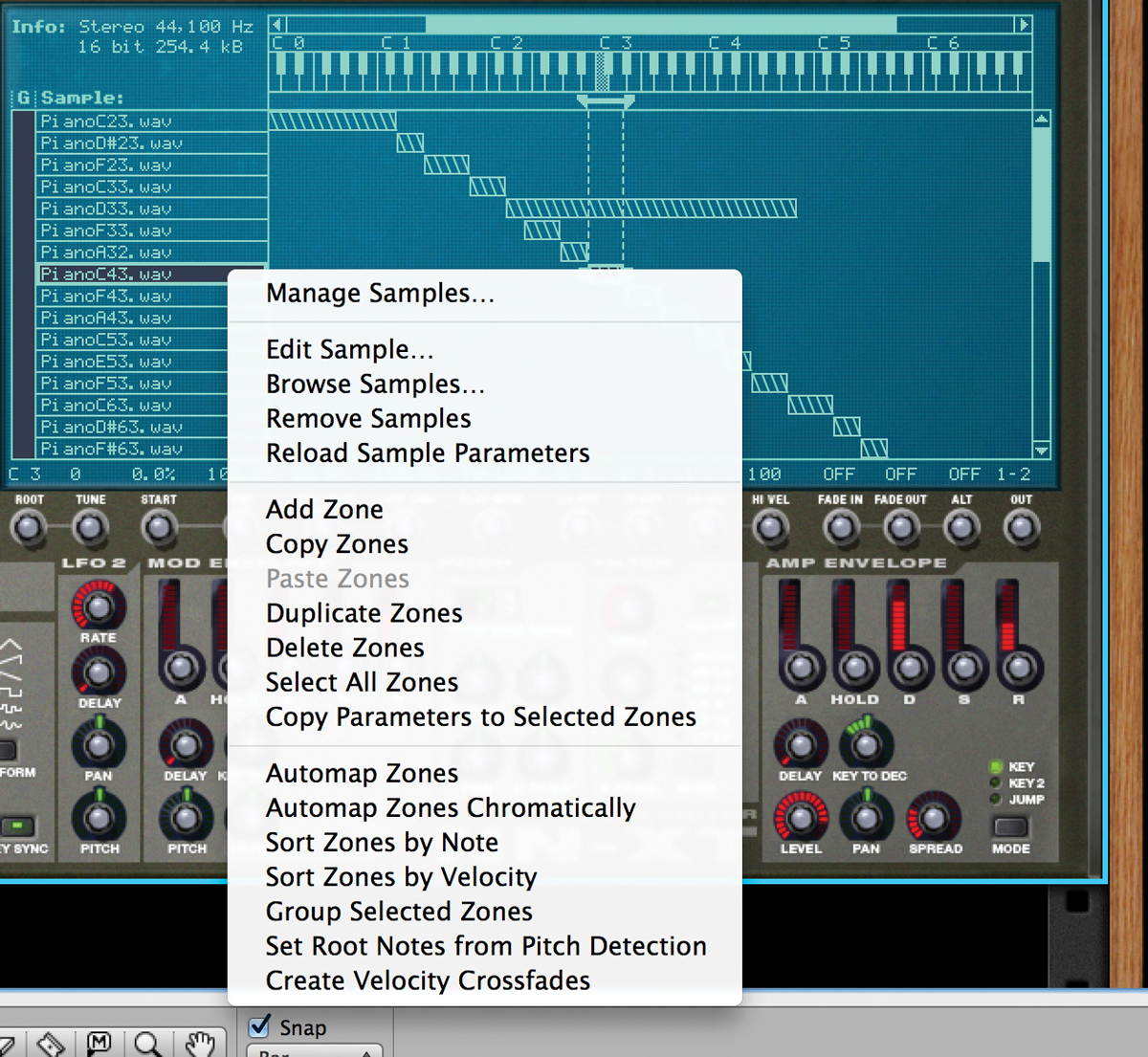 9: By selecting a note within the NN-XT’s Assignment window you can choose to split and layer sounds or whole instruments as you desire. By right-clicking on any sample in a patch you can edit, reassign, map, copy or otherwise mess about with samples to achieve anything from instrument mapping to sound mangling – and much more in between.

10: The NN-19, another veteran of Reason 1, is a simple but useful sampler that comes with some good basic instruments and sounds. It’s particularly handy for when you want to emulate that old-school sampler effect of playing a sample higher or lower and having its pitch affected, perhaps to an extreme degree.

11:  The External MIDI Instrument option isn’t actually an instrument in itself but a means of sending MIDI out of your interface to a hardware unit such as a keyboard, workstation, hardware sampler or drum machine. You would then connect the audio outputs of the hardware to your audio ins and record the triggered sounds back into Reason on an audio track.

12:  Last but not least, the ID8 is a really simple but useful general-purpose sound module with a few key instruments. Think of it as a sort of General MIDI module – great for knocking together backing tracks and very kind to your CPU. Originally developed for Record before it was subsumed into Reason, it’s still nice to have.