Nothing says hip-hop like a massive beat. Hollin Jones shows you how to lay down a phat one… Hip-hop is one of those genres of music that just doesn’t work without a good beat behind it. Whether you’re talking about early beatbox-themed rhythms, mid-skool stuff that heavily samples jazz and funk breaks or more recent […] 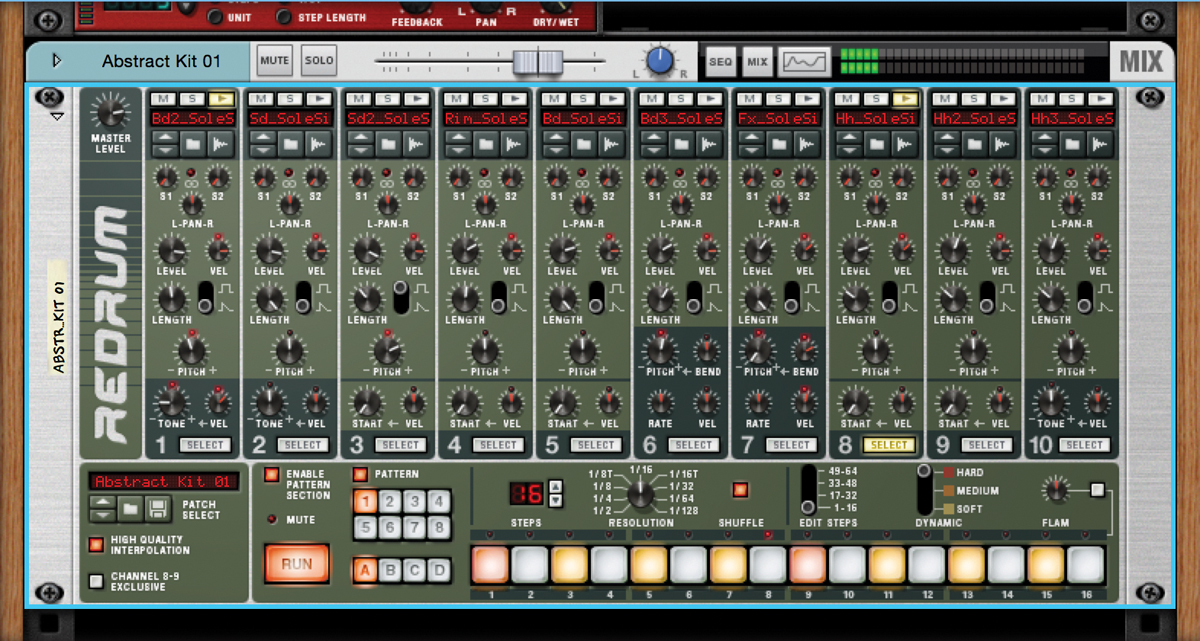 Nothing says hip-hop like a massive beat. Hollin Jones shows you how to lay down a phat one…

Hip-hop is one of those genres of music that just doesn’t work without a good beat behind it. Whether you’re talking about early beatbox-themed rhythms, mid-skool stuff that heavily samples jazz and funk breaks or more recent hip-hop that uses much more polished and heavily produced beats, the rhythm is king.

Stylistically, hip-hop beats can be among the most straightforward to program, since much of the time it’s all about providing a foundation for the rapper to spit over. This changes somewhat for instrumental hip-hop, of course, where the lack of vocals means you have to be more inventive with varying beats and melodies.

Modern hip-hop tends to be much more bold in pushing the envelope, changing time signatures from the standard four-beat, ramping up tempos way above the 80-110bpm of traditional hip-hop and using synthesized drums rather than sampled breaks.

Back to Basics
Like many musical genres, hip-hop has splintered and fused over the years, so there are many definitions of what constitutes a hip-hop beat. At its most basic you could say that a 4/4 pattern with the kick hitting the first and third beats and the snare the second and fourth, overlaid with eighth notes on the hi-hats or ride is an absolutely classic hip-hop pattern.

Swing is usually a feature too, and an overly quantized or mechanical-sounding beat won’t generally be much fun for a vocalist to rap over. Amounts of swing vary a lot but a degree of syncopation is pretty common, everywhere from a mild groove through to a full-on bounce. This is largely because early hip-hop involved sampling funk breaks, which were themselves heavily syncopated.

Programming basic hip-hop beats just involves having a bit of a feel for the groove. As ever, being a passable keyboard player will help, or you may want to use some kind of pads for MIDI input if you’re more comfortable with that technique. Using the mouse to enter notes is also possible, but for beats that rely on groove this can be less than ideal, relying as it does on using snap values to place note data in a musical grid. Notes that you input by hand can be too rigid when taken as a whole pattern, and it’s difficult to judge how to build a groove just using your eyes and the mouse.

Down to Business
Luckily Reason has the ReGroove mixer, which is designed to deal with this problem, so it’s somewhat more flexible than other DAWs. Even when a real-time MIDI groove mixer isn’t available, the vast majority of DAWs have groove quantize tools that you can use to apply a groove to a MIDI part, and keep trying until you get it right.

Many also let you extract the feel and groove of an audio or MIDI part – perhaps an imported drum loop – and apply it to a MIDI sequence. Reason has this feature in addition to the ReGroove mixer. You can also use the ReDrum’s internal step sequencer and apply ReGroove or global shuffle to take a standard drum pattern and make it swing.

To program a hip-hop drum part you’ll want to get an instrument with the right kind of sounds: ReDrum is usually better for old- and mid-skool styles, and Kong for more up-to-date drums (though in both cases you can mix and match sounds and use your own samples as part of a kit). The kick, snare and cymbals are the core (toms tend not to be used so much) and you can also add percussion, sound effects and one-shots on top.

There’s nothing to stop you using a couple of versions of a drum sound in a pattern, say a regular kick and a sub thrown in once every other bar, or two differently pitched hi-hats. In fact this is to be actively encouraged, as it makes your beats sound more interesting.

Modern hip-hop tends to be more involved in terms of the amount of variation in the drums, changing patterns more frequently and using a range of bleeps and squelches in kits. Beats are also more complex, with frequent repetition of notes and busier arrangements.

You’ll probably end up doing more layering and tinkering with these kinds of beats, and Reason’s randomization tools can help you here. Other DAWs also have randomizers and MIDI FX that can be used to generate or manipulate MIDI patterns in real time. If you are working with sampled loops you’re not restricted to simple stuff such as time-stretching – you can slice them up and re-sequence them in real time.

Reason lets you slice loops and place them straight into a Dr. Octo REX for re-sequencing, and other tools such as Geist, Maschine, Groove Agent and BPM have similar features for quickly mapping samples to pads. There’s never been an easier time to make hip-hop beats, so put on some records, get inspired and get programming today! 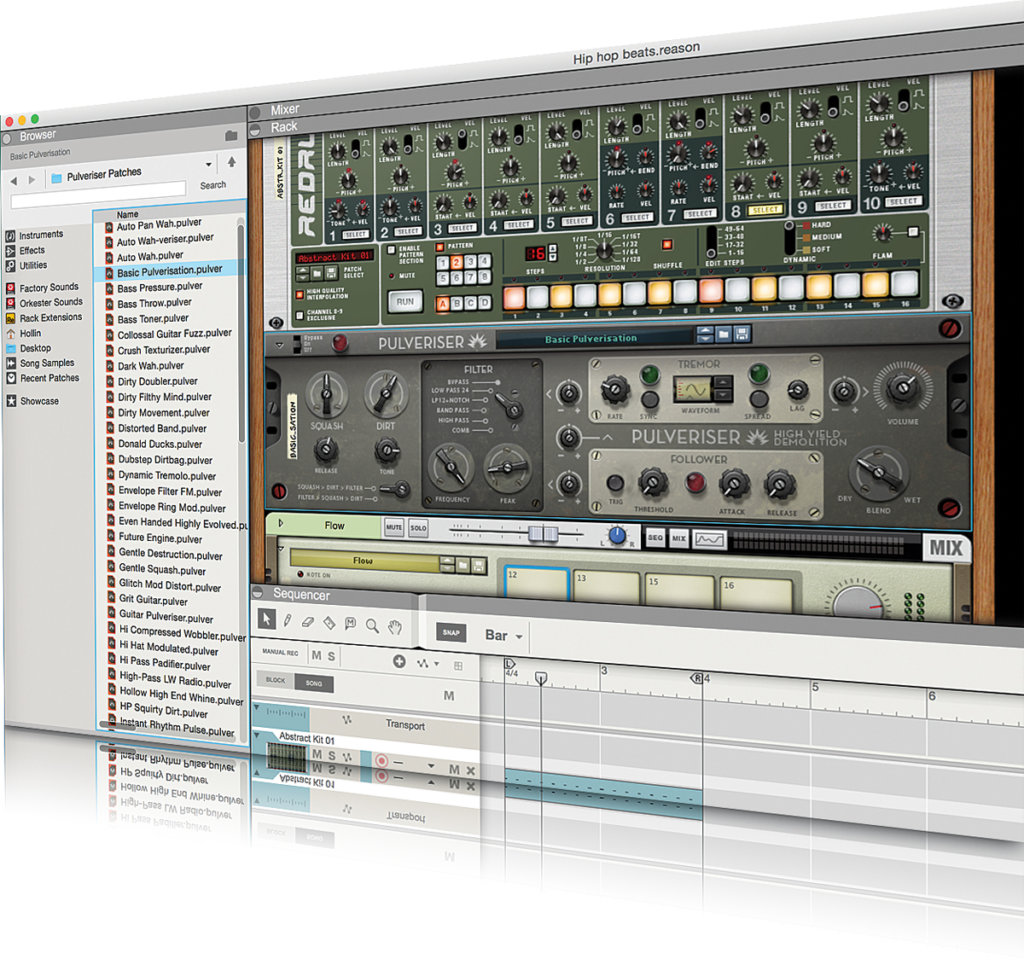 Beat Velocity
As with any MIDI, you are able to make comprehensive edits to parts after recording notes. In the case of beats this often means not only quantizing the clip but also working with the CC data that affects the character of the sound. Probably the most important CC for beats is velocity, as this determines the volume and force with which any given note is played back.

When you have a beat consisting of a kick, snare, cymbals and so on, varying velocity is crucial to getting a human feel for a part. Or conversely, making velocity uniform will lend a mechanical feel, which may be what you want. Choosing to make every alternate snare or kick a little louder can also help to make a beat feel more natural and less computerised. 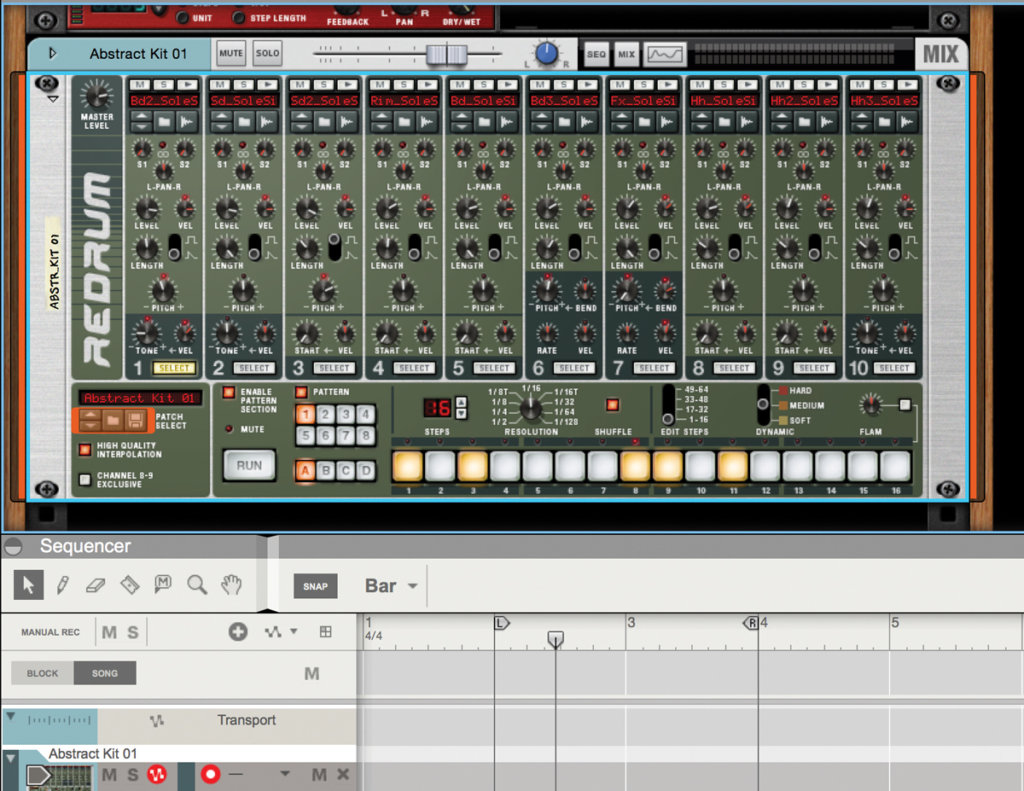 1:  Load up a project and set the tempo – here it’s an appropriate 95bpm, and we have chosen a hip-hop kit from the Factory Sound Bank. We’re going to use the on-board sequencer to program a part 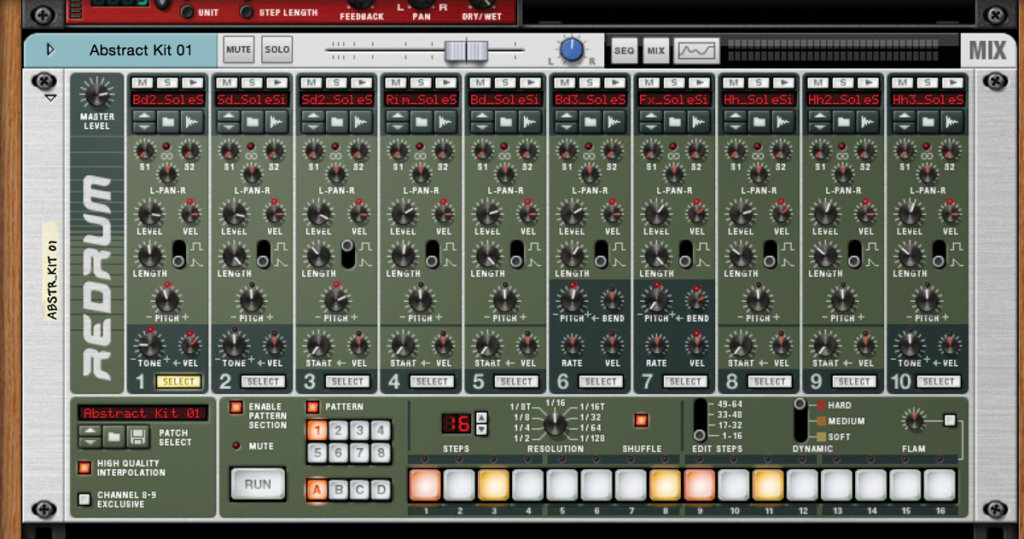 2: With the kick channel in ReDrum selected, press buttons 1, 3, 8, 9 and 11 to program a basic hip-hop kick pattern. Switch the Dynamics control to Hard and then press steps 1 and 9 again to make them louder than the other hits. 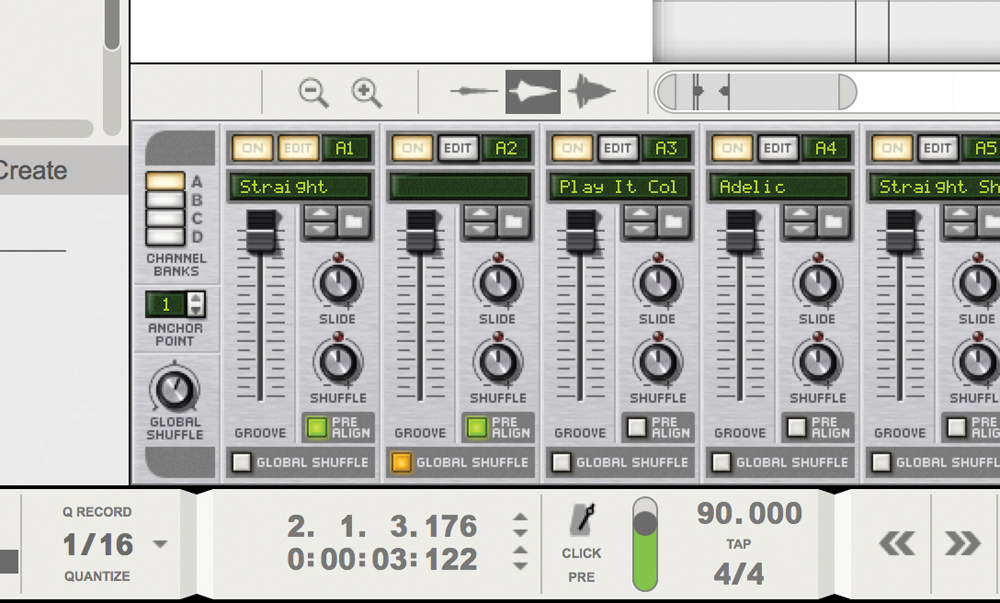 4: If the pattern sounds too lifeless, press the Shuffle button. To alter the amount of global shuffle, call up the ReGroove mixer and look at its bottom left-hand corner. Here you can change the global shuffle amount. 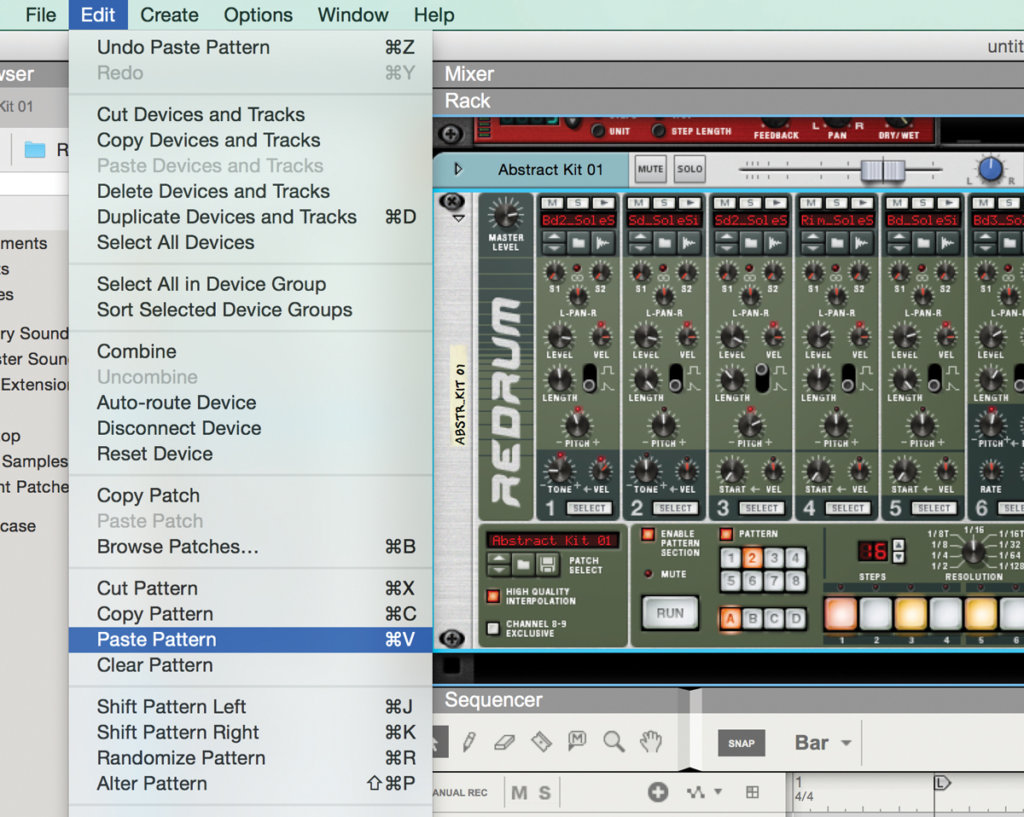 5: In the Edit menu, with the ReDrum selected, you will find a range of tools for working with the pattern. You can copy and paste it to a new slot to make changes and build up the beat, shift it around, randomize or alter it to introduce new variations 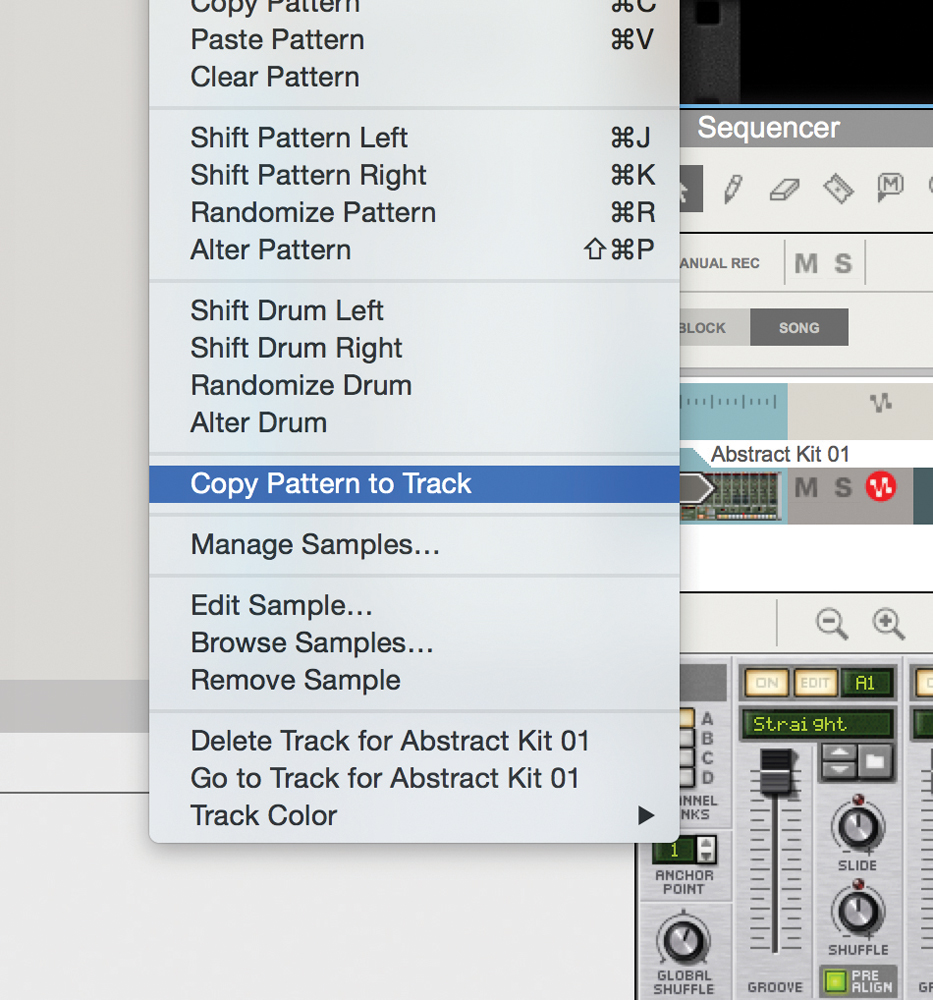 6: From the same menu you can choose an option called Copy Pattern To Track, which will place a copy of the currently selected pattern into the sequencer track for ReDrum. Once it’s there you can edit and work with it more flexibly, or export it as a MIDI file.

7:  Kong has a bunch of tools for making more modern hip-hop beats. Load up an instance and then find a kit you like from the Browser. Mixing synth-generated and sampled drums is a good way to get a more cutting-edge sound.

8:  Use your input device, or even click on Kong’s pads with a click track running and record activated, to play in some beats. You can go round in a loop adding elements with each pass. Quantize the pattern if necessary. 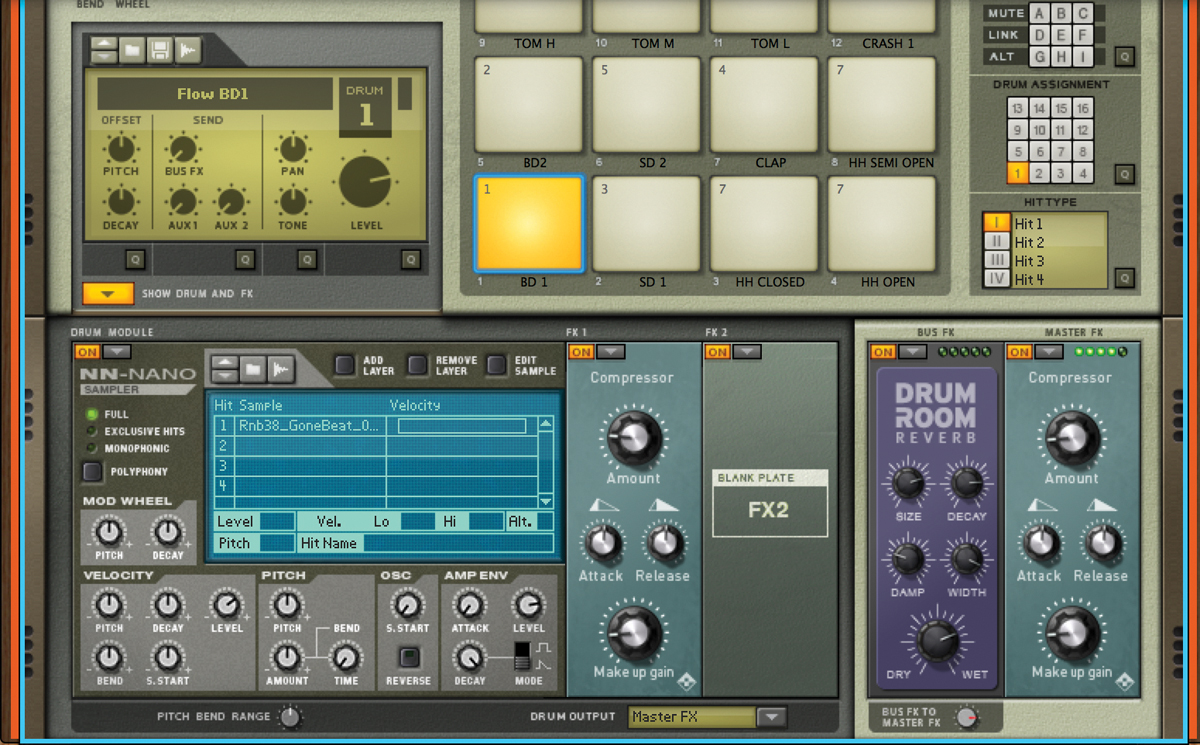 9: Sub-mixing and effecting different elements of a kit is vital to getting a great sound. Open Kong’s programmer section and click on any pad that’s in use to see how it’s being generated. Select an effect to add to it, perhaps a compressor to beef the drum hit up a little. 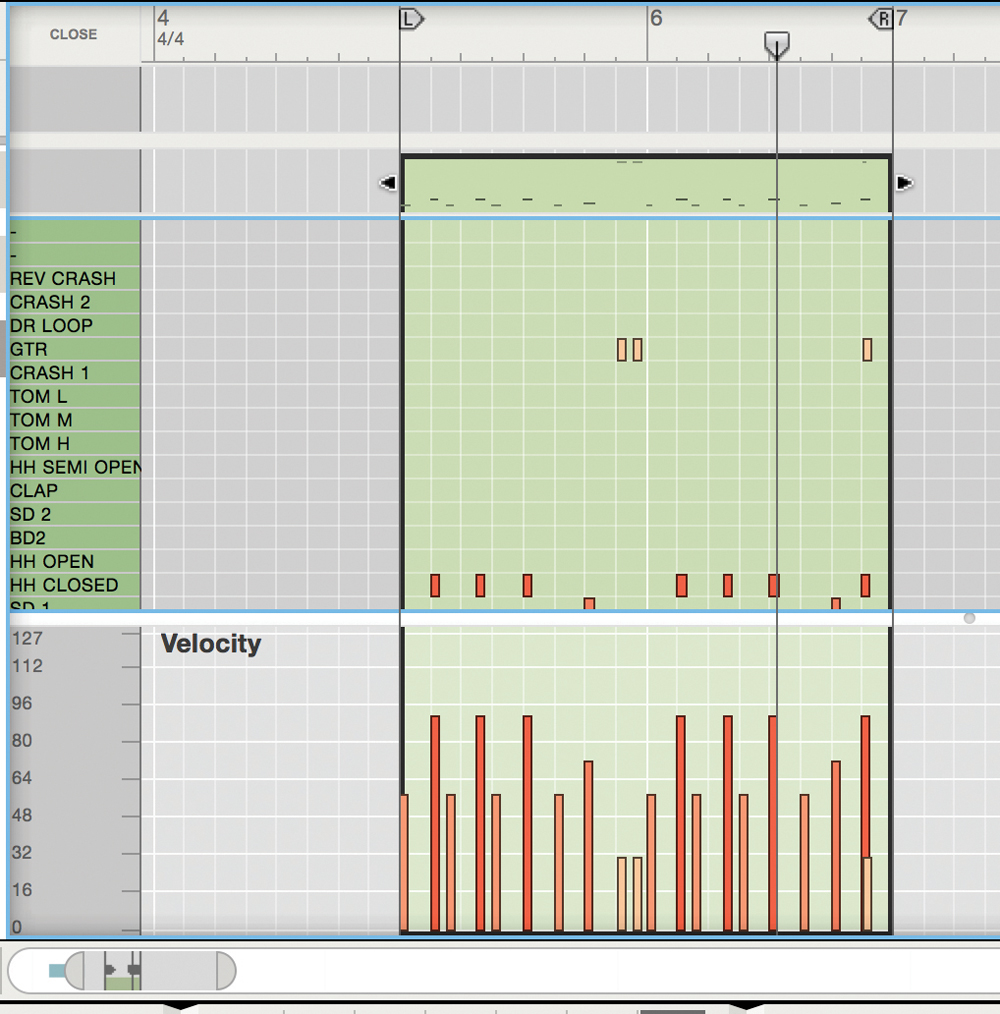 10: Consider adding some sound effects or short one-shot samples to the beat to liven it up a bit. Of course you can always copy and paste the clip in the sequencer and make edits to the duplicate version so you build up various different beats.

11:  Some effects always liven up a beat, so in this case we have added a Pulverizer to Kong and introduced some pumping, squash and a little dirt to the signal. This makes a big difference, giving us that fresh, urgent sound of modern hip-hop 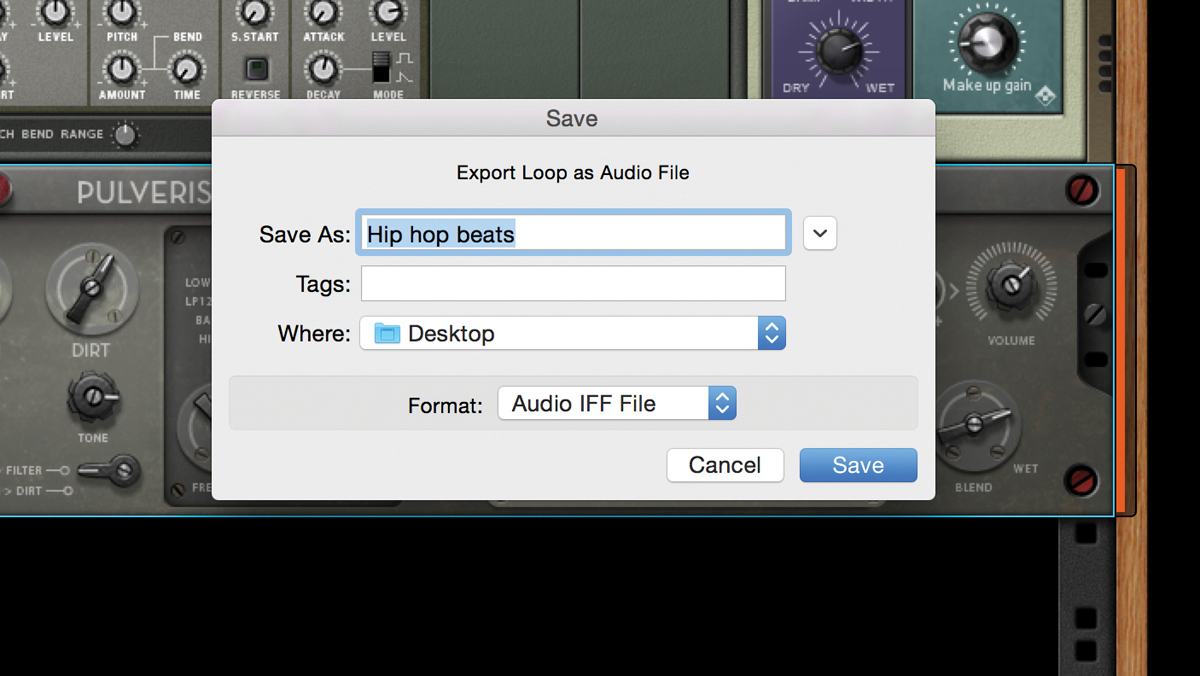 12: Finally we export our beat as an audio loop so that it can be used elsewhere. Perhaps you might want to send it to someone else, sell it or even load it into a hardware sampler for live performance.