Reason’s Rack Extensions open up a new world of instruments and effects – and the Props’ Radical Piano is up there with the best of them. Hollin Jones investigates in this Reason Tutorial     Until version 6.5, Reason didn’t support any kind of add-on instruments or effects, though you could load sounds from ReFills […] 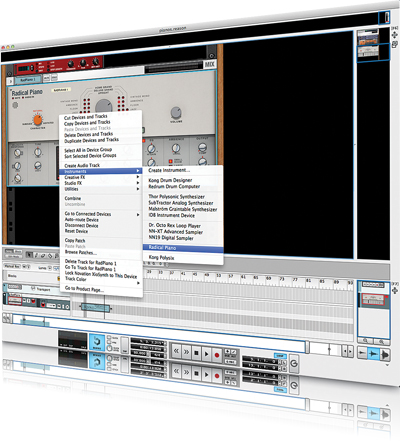 Reason’s Rack Extensions open up a new world of instruments and effects – and the Props’ Radical Piano is up there with the best of them. Hollin Jones investigates in this Reason Tutorial

Until version 6.5, Reason didn’t support any kind of add-on instruments or effects, though you could load sounds from ReFills and even produce your own. And, of course, you could and still can ReWire into another DAW to stream sound and MIDI between the two, but with the release of Rack Extensions, this is becoming less of a necessity for many users.

Rack Extensions are fully fledged instruments and effects that can be downloaded from the Propellerhead website and they integrate completely into your projects. There are free 30-day demos available so you can try any of them as long as you have a user account.

Rack Extensions are aimed at encouraging third-party developers to build modules for Reason, and indeed this is happening, with some big names already onboard. The Props themselves are getting in on the act too, and one of the first releases for their own platform is the excellent Radical Piano, a sample-based instrument that brings authentic pianos to the Rack. The company hmade piano sounds before, of course, most notably with the well-received Reason Pianos. However, while that relied on Combinators and samplers, this is a Rack module in its own right.

You will need to be running Reason 6.5, since this is the version that supports Rack Extensions and includes the Authorizer application that is required to download additional modules. Go to the Rack Extensions Store on the Propellerhead website and either download the trial of Radical Pianos or purchase it. After it has downloaded you should see it appear in Authorizer alongside any other Extensions you have installed.

From the Create menu in Reason, either go to the Instruments section or open the Browser and go to the Rack Extensions section and navigate to Radical Piano. Here you will see a number of folders, from which you can choose a preset. Remember that you can play in notes from your MIDI keyboard while single-clicking on patches to preview them in real time. 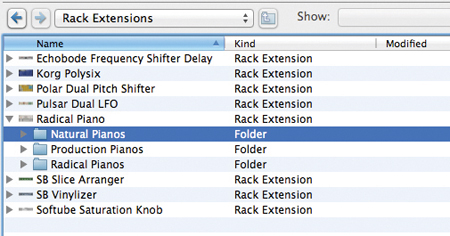 Pick a patch and load it. Here we have chosen one called Bright Upright, and while in Reason’s old Factory Sound Bank you might have thought you knew what to expect from a preset with that kind of name, you may be surprised by how realistic this piano actually sounds. Radical Piano uses samples but also some clever technology to let you manipulate the character of sounds and blend tones and ambience in ways that would be practically impossible in real life.

The front panel contains some quick controls that enable you to alter the way the piano responds. On the left you will find a Character knob, which can be used to set a sound’s character to subdued, natural or agitated (or any point between these moods). You will find that the Subdued setting is soft and muffled, almost as if the soft pedal is pressed on the piano. Natural is fairly straightforward; Agitated is more treble-heavy and has more attack. This dial offers a quick and easy way to sharpen up or soften the piano. 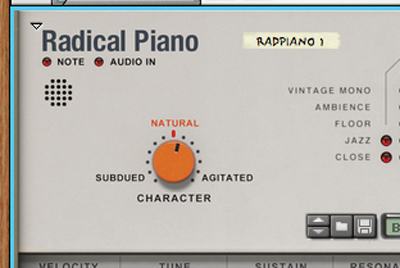 In the centre is a Mic Blend dial, which has a number of options. There are two microphone types, one on the left and one on the right, and these can be set to use five different positional options each, from ambient to close-mic’ed. Additionally, there are three models of piano. Deluxe Grand and Upright can use all five mic positions; Home Grand can use jazz or close-mic.

The Mic Blend dial lets you select any blend of the two, so between this section and the Character knob you can do a huge amount of piano sound-shaping with these two sections alone.

If shaping the sound of Radical Piano stopped at these controls it would still be a pretty good instrument, and certainly a big improvement on what had come before. However – as you may have guessed – it does not. The control section underneath the front panel contains some more important parameters for shaping your sound that are particular to the way acoustic pianos work. Starting on the left-hand side, there’s Velocity Response, which governs the way the notes respond to the velocity of your playing, and there’s also a Curve selection option. 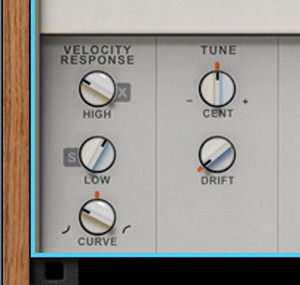 Next to this you will see a Tune section, from where it’s possible to detune the piano using the Cent control. Even more interestingly, the Drift dial enables you to add some drift-tuning to the sound, simulating an old, slightly wobbly piano. This isn’t straight detuning: it introduces some randomisation into the tuning so is good for old-fashioned effects.

Moving on, we come to a Sustain section, where it’s possible to enter with the mouse a sustain value for the sound. This is important because it means you can record sustain automation easily even when you don’t have a sustain pedal to hand, perhaps when you’re working on the move with a laptop. Next up is a Resonance section from where you set the sympathetic resonance of the sound, and an Envelope section where the attack, release and decay curve can be tweaked. By playing with the Attack dial you can simulate a sort of ‘backwards’ piano effect if you wish. 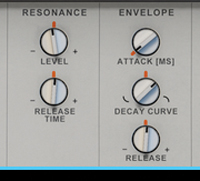 The Mechanics section is of particular interest when it comes to acoustic piano sounds. Real pianos are quite complex mechanical instruments, with lots of moving parts that influence the sound they produce. Radical Piano simulates these mechanical sounds and enables you to change them in ways that once again would be very difficult in real life. The Key Down control adds or removes mechanical noise from the action of a key being pressed; the Key Up does the same for when a note is released. The Pedal dial introduces variable noise for when the sustain pedal is pressed and released. 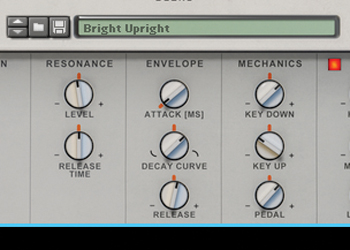 These three controls can really change the character of the sound, and while using less mechanical noise will make a piano seem cleaner or newer, adding more noise will make it seem older and more dusty. So if it’s a creaky, vintage sound you}re going for, dial in some more mechanical noise. You can save your own presets with different amounts of noise and flip between them.

The remaining control sections relate mostly to effects – you get an EQ with adjustable low, mid and high frequencies that can be used to shape the sound, as well as a reverb section. The ambience controls as they are called have options for small or large rooms, a hall or a theatre and can place your sound into any of those virtual environments. 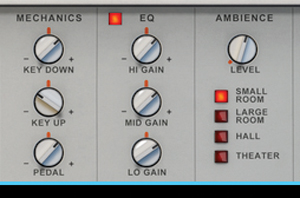 Finally, there’s an Output section with two controls: compression, to add some body and boost to the sound, and Width, which can be used to make a sound more mono at one end, or at the other, have more stereo width. These are useful for placing a sound in the mix. 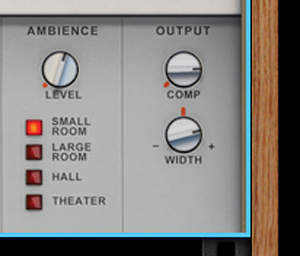 Just when you thought Radical Piano couldn’t get any more flexible, spin the Rack around by hitting the [Tab] key and you will see that it actually has a couple more tricks up its sleeve. Like many modules it can accept CV in for sequencer control and there’s a Modulation CV input section with variable levels to control pitch and master volume from another source. 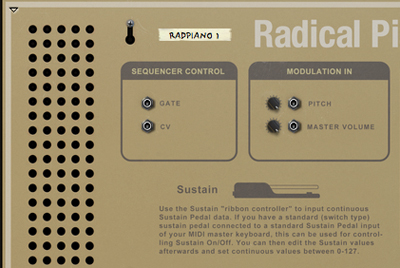 Radical Piano can even accept audio input for other sounds to make use of its effects section, and if you connect a sound to the input jack you will see that it passes through various sections in order: resonance, EQ, ambience and then the compressor. Radical Piano’s various effects are therefore available to any other module or audio track in your project, greatly expanding its usefulness. 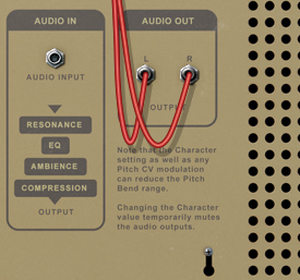 Radical Piano is, rather ironically, not all that radical at all. It’s actually a very conventional piano instrument with regard to the sounds it produces, but this is a good thing. You can easily make it more radical by adding effects such as echo or distortion, gating or playing with its envelope controls to create more otherworldly piano effects. For most people, though, it will serve as a really authentic-sounding piano for your Reason projects. Grab it from the Props website today and see how it works for yourself.

This vid explores some of the features of Radical Piano: