Before we begin a new series looking at Reason in-depth, it’s time to take a look at the all-new features in the latest 10.1 update, starting with the all-new Drum Sequencer. Andy Jones explores… It feels like only yesterday that we were waxing lyrical about the wonders of Reason 10 with its all-new Europa and […]

Before we begin a new series looking at Reason in-depth, it’s time to take a look at the all-new features in the latest 10.1 update, starting with the all-new Drum Sequencer. Andy Jones explores… 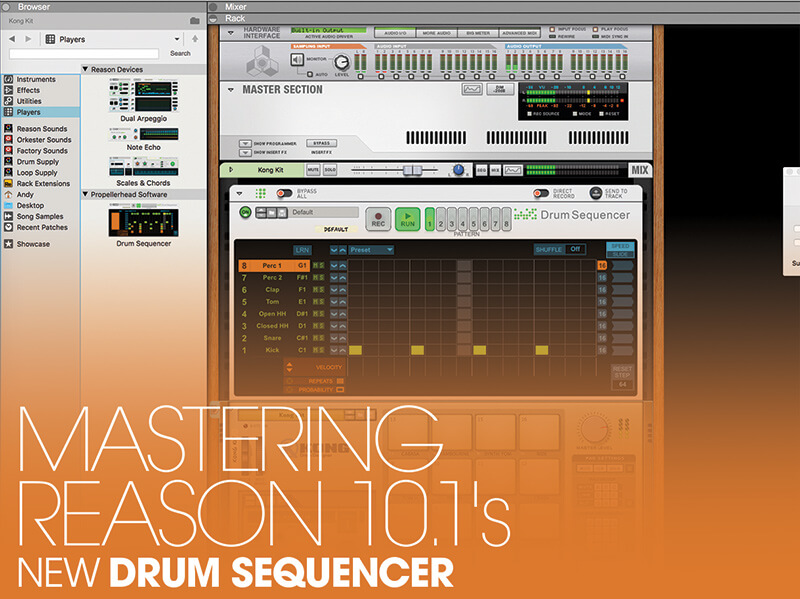 In truth, these updates were six and twelve months ago respectively, but that’s still quite a release update rate so no surprise that about now we get another, albeit not quite as dramatic, point update in the form of 10.1. Never let it be said that Propellerhead rests on its laurels…

Reason 10.1 has a couple of very neat inclusions, the first of which is an update to the Rack Extension format which the Props say offers ’improved sample loading with sample zones and pattern automation support’. As if to prove this you can, or at least could, download a free Drum Sequencer Player.

We say ’could’ as this was, at the time of writing, a limited offer to entice you to buy Reason or upgrade. Hopefully, as you read this, Drum Sequencer will still be free, or at least a cheap buy, because it’s a very neat and speedy way to create beats in Reason as we’ll see in our workshop.

Importantly, there are now also more third party Player devices available at the Propellerhead shop, including Chord Detector by Static Cling (currently just £8, reduced from £14), Euclidean Rhythms by Robotic Bean AB (£35), and zvork’s ST100 Strumming Machine (£17). We’ll endeavour to look at some of these in future mini reviews, but in this workshop we will focus on the Drum Sequencer.

Perhaps more interestingly to synth heads is an addition to the already mighty wavetable synth Europa. This was our highlight of the Reason 10 update, a synth packed full of EDM-style presets with swirling and throbbing movement, all created thanks to an easy-to-implement wavetable synthesis.

This kind of synthesis grabs your ordinary oscillator waveform synthesis by the balls and drags it kicking and screaming into the 21st century. In essence, rather than sticking to one wave, your sound can progress through a table of different ones and Europa makes it very easy to define just how this movement occurs, with a fantastic envelope section that allows you to determine the shape, speed, direction, and rate of movement (plus a whole lot more). The results are labelled perhaps unfairly as EDM-style but wobbling noises are the order of the day even if many other styles of motion are possible.

Your audio in europa

Europa is such a creative beast that we’re basing a lot of our new Reason Sound Design series around it, and the new 10.1 update adds just a little something to Europa to make it even more adventurous. Now you can use your own audio to load in as samples or create wavetables so now you have total control over Europa’s very core.

Samples can also now be loaded into Europa’s Spectral Filter so you can use your own audio as the base for the filter’s spectral multiplier.

This addition might only seem slight but it adds to the creative power of a synth that can already be considered as a sound designer’s dream within a DAW which is arguably the best for creative sonics around. Not only that, but, as ever, Reason’s exceptionally fast workflow gets you speeding through whatever tasks you throw at it.

Combine that with Europa’s creative power and dynamic appeal plus the ability to load in your own audio, and we think Reason 10.1 really is the DAW to beat when it comes to creating your own signature sound.

Over the following few pages we’ll look in more detail at Drum Sequencer and Europa’s User Wave options. We’ll load Drum Sequencer up with Kong although, as with most things in Reason, it doesn’t have to be used for what it was intended for as it will trigger pretty much anything – we had it generating random notes in Europa at one point in our tests! However, in the workshop we stick to beats as that is where it excels and has one or two great little features up its percussive sleeve.

Then we turn to Europa and show how you can use whatever audio you choose as its core waveforms and also as its Spectral Filter shape. We ended up loading two breakbeats into both and got some extraordinary results so it’s very likely that we’ll return to Europa as part of our Reason sound design course in the near future. It might just be a point update but Reason 10.1 really does expand your sound options. 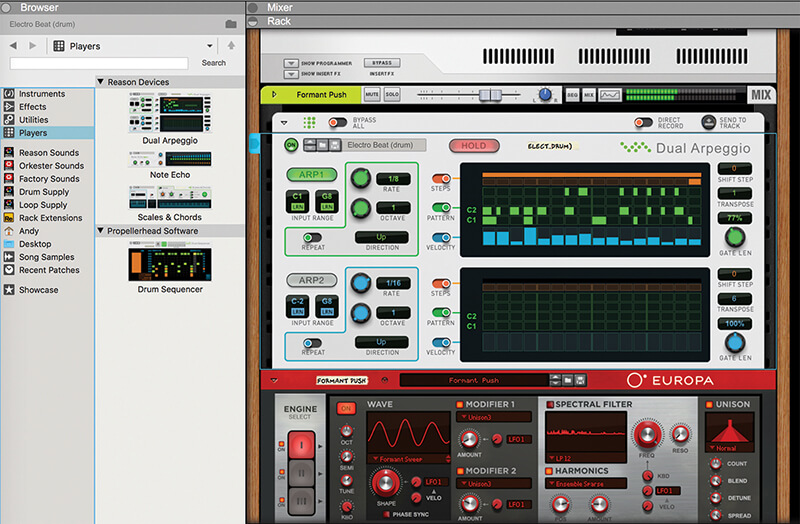 1. Reason’s players include the Note Echo, Scales and Chords and our favourite, the Dual Arpeggio, which we’ve been enjoying a lot recently when controlling the v10 star Europa. 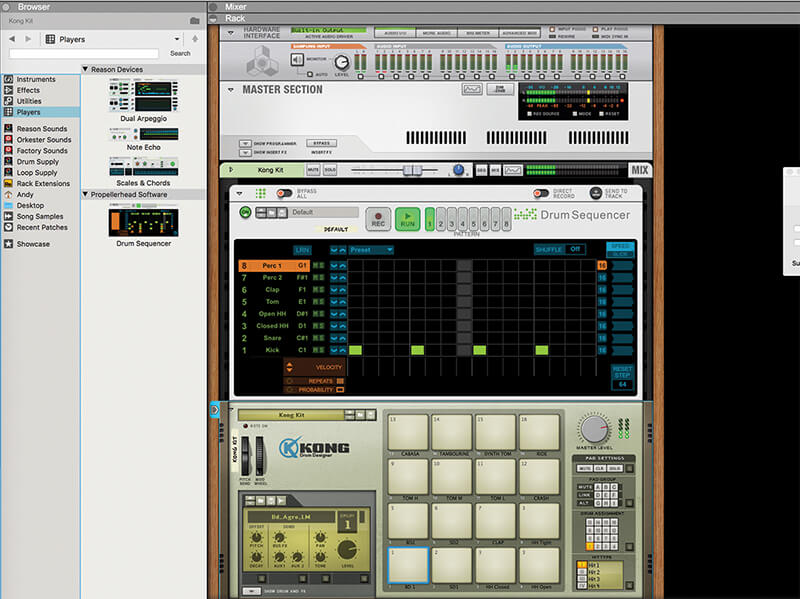 2. The new kid on the block is Drum Sequencer that was free with v10.1 so we hope you downloaded it when you had the chance. Drag in a beat instrument like Kong and then add Drum Sequencer from the Players menu. 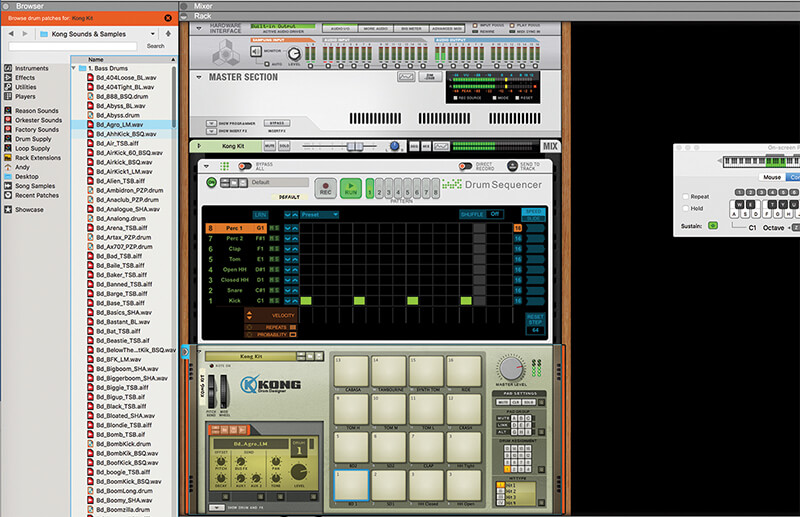 3. Drum Sequencer opens with four kicks in a four to the floor style. You can, of course, change the sound simply by hitting the kick pad in Kong and loading in a new sound from the extensive library. 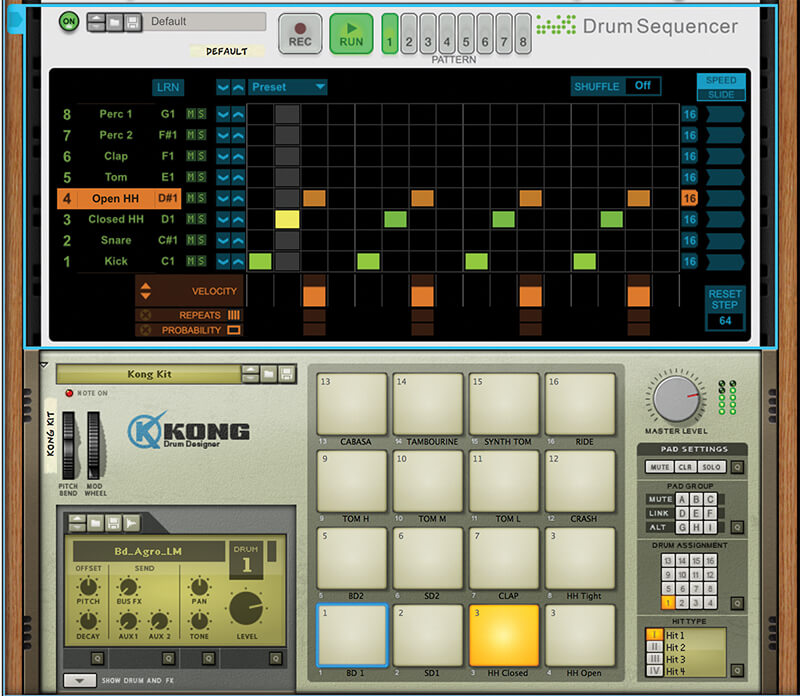 4. Then it’s simply a matter of drawing in notes as you would with any step sequencer of this ilk. Draw them across the first pattern and you can also chain eight different patters together to create complete drum tracks.

It’s the reason way Reason has always been a DAW with which you can break rules with. Its easy rackable nature means that anything can work with anything else. The Players, while designed for one instrument, can easily work with another, so do experiment with different combinations. 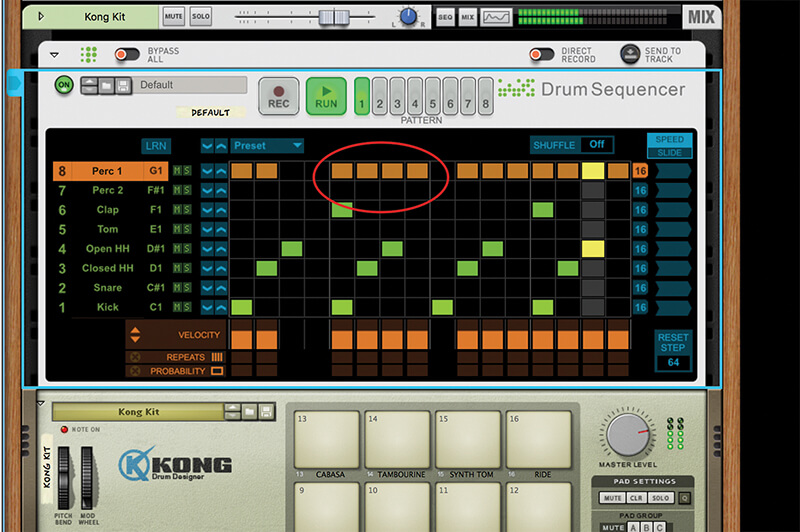 5. Drum Sequencer comes with several ways of creating varied beats in an instant. You can draw notes in lines simply by clicking and dragging the mouse along each pad sound.

6. However, the drop down menu at the top gives you other options. The Preset one allows you to skip through various rhythmic options per track using the Up and Down arrows. We’ve selected a manic fill!

7. Other options in this menu including cutting and pasting beats you are happy with across tracks and a Random option to give you completely random beats per track. 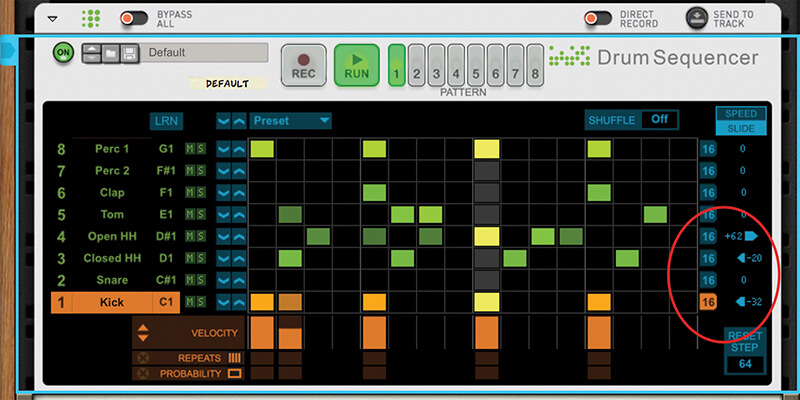 8. Finally, to the right of Drum Sequencer you get timing options – Slide and Speed – to give you a less machine-like feel, but do be careful as these are easy to overdo, resulting in some odd beats.