Adding an expressive legato line to your score can really give your music an emotional edge. Mark Cousins picks up his bow and continues his music to picture series… As we saw in the last music to picture workshop, the key to an effective score often lies in the expression that you can inject into […]

Adding an expressive legato line to your score can really give your music an emotional edge. Mark Cousins picks up his bow and continues his music to picture series… 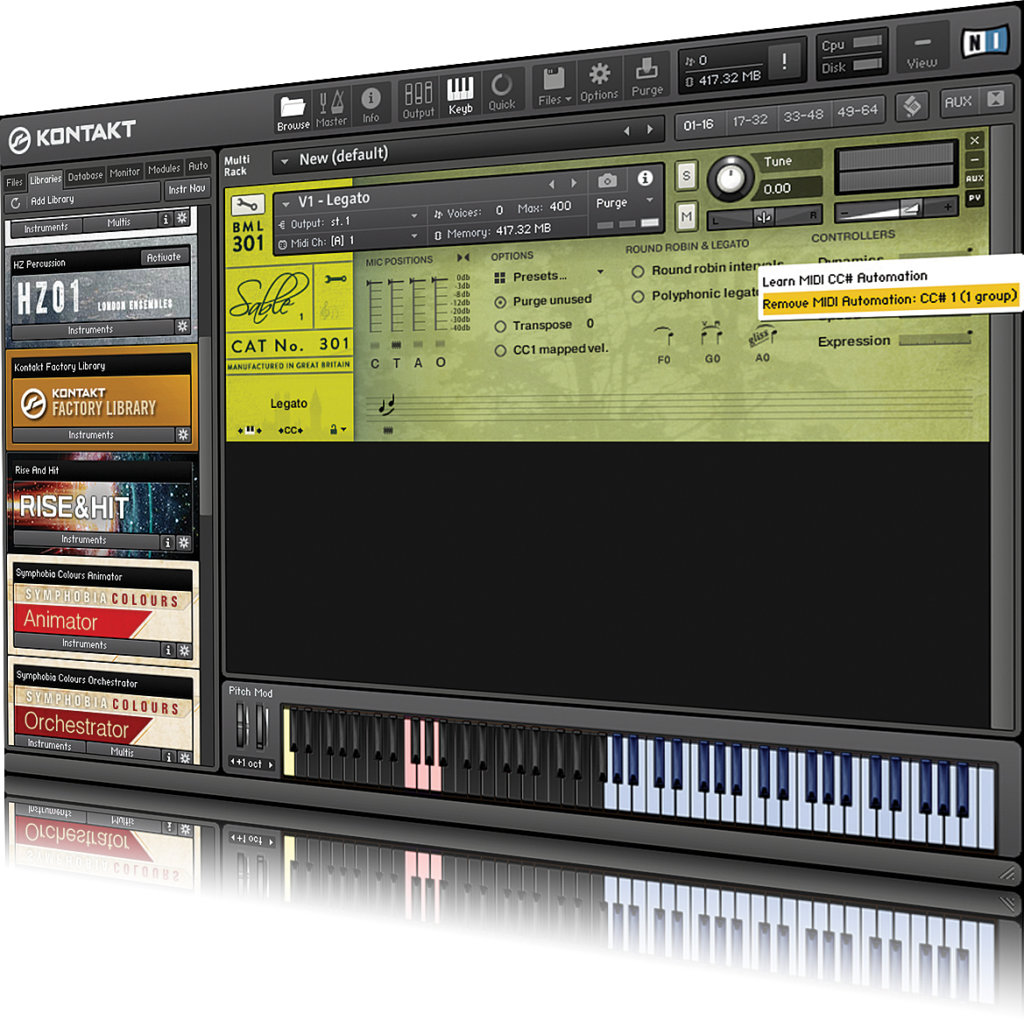 As we saw in the last music to picture workshop, the key to an effective score often lies in the expression that you can inject into the performance. Rather than the score being a series of one-dimensional music lines, each part can be sculptured to match the action perfectly on screen – maybe moving between a sumptuous ‘romantic’ legato line, for example, to a furious spicatto sequence underpinning an action sequence.

If you’re in any doubt, look at the expression and colour in a John Williams score, and note how he uses numerous articulations and a wide range of dynamics to inject life into his music.

When you’re working with sample-based virtual instruments, the expressive characteristics are defined into ways – initially, by the use of keyswitched articulations to move between radically different playing styles (which we explored in the last music-to-picture workshop), followed by the use of MIDI CC data and legato transitions to shape the expression over the duration of a note or phrase. Having selected the broad playing style, therefore, we need to form the expression of the part – something that can really help the music ‘breathe’ and come to life, as well as adding even more colour to the score.

Ground Control
For most of the longer musical articulations (like sustain, tremolo, flautando, legato) expression is added using a number of MIDI CC messages, with the exact number of options and MIDI CC mapping varying from one library to another.

Arguably, the most important expressive quality is dynamics – moving between a subtle pianissimo to a much more aggressive fortissimo. With an expressive score, the use of MIDI CC messages will shape each note – so that a phrase might begin from the softest pianissimo, crescendo over the shape of the melody, and then gradually fade towards the end of the phrase.

On the whole, it makes sense to record the musical line using a static ‘Vanilla’ dynamic setting, so that you can concentrate on the notes themselves rather than how they’re performed at this stage. Once the part is recorded, consider creating a parallel track lane and then recording the dynamic movements as a separate pass (using a MIDI controller, or your modulation wheel). Try to think like a real player and how they might shape the phrase – adding small movements, or more expressive gestures.

Leg Up
For a truly realistic expressive musical line, you might want to consider using a dedicated ‘legato’ instrument. Legato instruments trigger a transitional sample based on the interval between the two notes. For the legato transition to be triggered correctly, you’ll need to ensure that the notes within the sequence overlap slightly. Either select all the notes in the sequence (apart from the last note) and increase their duration, or simply take a look through the sequence and adjust any notes that don’t overlap.

Depending on your library, it might also be that you’ll find a MIDI controller (much like dynamics) is used to define the speed of the legato transition. On the whole, fast transitions work best as you’re playing the line in, or for fast moving passages, while longer settings create a more naturalistic, portamento-like transition between notes. For the most emotive results, reserve the slowest transitions for pronounced interval jumps within the sequence.

Alongside dynamics and legato speed, you might find a MIDI controller for sampled vibrato, moving between samples devoid of a played vibrato, and those with a defined vibrato effect. Again, think about the shape of the phrase and how a real player would inject emotion into the performance. While such exhaustive MIDI CC usage can take time to record, it’s worth remembering that you can copy the movements around the rest of the section, almost like you’re conducting the violins, violas, cellos and double basses at the same time.

Expressive Scoring
Between our investigation of articulation switching last month and this month’s exploration of expression and legato transitions, you have all the key components of an expressive music-to-picture score. Often, the best scores are relatively simple on a musical level (your music should support the picture rather than dominate it) with the interest added in the way the music is performed.

By exploiting the full sonic and expressive potential of your sample libraries you can ensure that your music is given the right amount of emotion and colour it deserves.

Focus On MIDI CC Assignments
Where they’re used, most Kontakt-based instruments enable you to reassign MIDI controllers. Try establishing a set of MIDI CC messages that you use all the time, by first assigning them to a MIDI controller keyboard and then reprogramming your instrument accordingly, before saving them (as a new Kontakt instrument) in their altered form. If your MIDI controller is rather basic, there are some ingenious workarounds.

Use Logic’s Environment feature to re-map Mod Wheel movement to a new controller message types as it enters Logic. Alternatively, record the moves as Mod Wheel data but then use an Event List editor, or text-based Logic/Transform editor, to remap accordingly.

Step By Step – Legato And Dynamics

1: Legato instruments require overlapping notes to trigger a transitional sample between the notes. Either manually check each note, or select the whole sequence and proportionately adjust it so that all the notes are slightly longer.

2: If you’re working with a wind or brass legato line, ensure you account for the occasional breath, rather than having a continuous legato. Also, you might want to bring all the notes back by 1/32nd if the instrument has a slow attack.

3: Expressive qualities of your virtual instrument (such as vibrato, dynamics, a legato time) are usually by an accompanying MIDI CC number, like modulation wheel. Set up your controller for this mapping, or re-map the routing via the instrument’s interface.

4: The most realistic results tend to come from ‘performed’ movements of your MIDI controller assignments. Start by creating a different track lane for each expressive element – in this case, dynamics, vibrato and legato speed.

5: Having played the part with a fixed dynamic, now comes the point where you can think more about the performance. Shape the dynamics using ‘softer’ note entries, a gentle undulation across bars and a gradual diminuendo over the end of the phrase.

6: Next comes vibrato. Try to think like a real player and how they might add vibrato to improve the emotive qualities of the melody.Float around halfway – adding more vibrato for particularly emotive parts of the line.

7: Legato speed is a subtle but important feature. Distinct intervals tend to suit a slower speed, where there’s a more noticeable glide between notes. Use a faster speed where the rhythmic precision in the phrase is more important.

8: Once you’ve recorded a series of moves with one instrument, there’s no reason why these movements can’t be used with other instruments in the ensemble. In this case, the expressive qualities of Violin 1 have been directly copied on to Violin 2.

9: If you’re happy with the expression you’ve recorded, you could choose to merge the regions as one, so that the MIDI CC data sits with the note information. This might be particularly important as your arrangement becomes denser.

10: Even if the data is written into the region, you can still use your DAW’s Piano Roll editor to view and edit the MIDI CC data. The advantage here is that we can see the controller movements right alongside the note data.

11: As well as viewing MIDI CC data within the region, some DAWs also enable you to view the MIDI CC movements at arrangement level. In Logic, for example, MIDI Draw lets you edit MIDI CC data displayed directly on the region.

12: If you need to remove any embedded data, the Event List editor can also come in useful. Selecting ‘Similar Events’ highlights all the dynamics moves (assigned to the modulation wheel), which can then be deleted or moved to a new location.