By closely examining other people’s tracks you can learn some stunning production techniques that you can use in your own music. In our opener, we look at Faithless’ Insomnia and learn that dance music doesn’t just have to be about big bass lines and huge kicks – and that a second inversion could be the […]

By closely examining other people’s tracks you can learn some stunning production techniques that you can use in your own music. In our opener, we look at Faithless’ Insomnia and learn that dance music doesn’t just have to be about big bass lines and huge kicks – and that a second inversion could be the way forward…

This article was put together with the help of Point Blank Music School, London. The school offers a range of courses for all aspects of music production, covering every aspect of the music-making process and explored in a hands-on environment focused on developing skills and building creative confidence. Inspirational tutors – many of them signed to labels and actively performing, DJ’ing and releasing tracks – provide continual support throughout, creating a unique hothouse of knowledge, learning and opportunity. 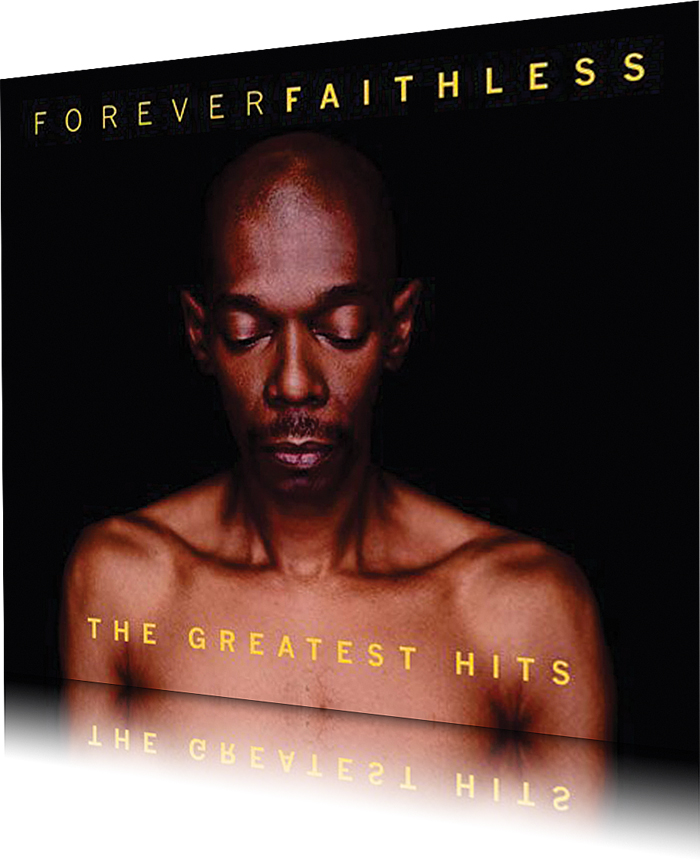 Welcome to a new series of Deconstructions originally put together by our friends over at Point Blank Music School. These articles are about how classic tracks were produced and how you can use elements of their production in your own compositions. We’ll look at the arrangement, production tricks and composition practice of a different piece of music each month to determine what made it a classic in the first place. We’re not, it must be said, encouraging you to copy other people’s ideas, just some of their working practices.

In this first instalment, for example, we are looking at Faithless’ ground-breaking track Insomnia, the band’s second single and one of their most successful. It was released in 1995 and became a hit in the dance charts, peaking at number 27 in the UK in 1995 and number 1 in 1996. The track follows the (now) classic formula of building up an arrangement, dropping it back and then bringing it all back in with a massive riff. Hands in the air, ‘Tune!’ and we’re away – indeed, you could argue that this is the track that started ‘the formula’ for many.

However, beneath the obvious arrangement shenanigans it’s actually some subtle shifts in chord sequences and the bottom notes in the main pizzicato riff that make the track.

Insomnia certainly stands out as one of the great dance tunes and we think it’s the more subtle elements of the production that take it beyond the rest – and it’s these elements that we can all learn something from.

But don’t worry: you don’t need to be an expert in notation to understand what is going on. Our step-by-step guide to the three elements in the song – the stabs, the major-to-minor strings and the aforementioned riff – will have you experimenting with second inversions of minor chords in no time.

The Band, the Track
Faithless – Rollo Armstrong, Sister Bliss and Maxi Jazz – had a good run, especially as dance acts go. They started out in 1995 and released Insomnia from their debut album, Reverence. It’s not the out-and-out dance album you might imagine but actually a mixture of material. Insomnia, though, had the sound that Faithless would become known for: big melodies, big production and huge impact. It became one of the band’s biggest hits and, as if to underline its classic status, resurfaced in the charts some ten years later. Faithless disbanded after a 15-year run and 15 million sales. Rollo works with sister Dido, also a huge album-shifter. Christmas must be pretty lavish round theirs…
Step By Step: Key Elements 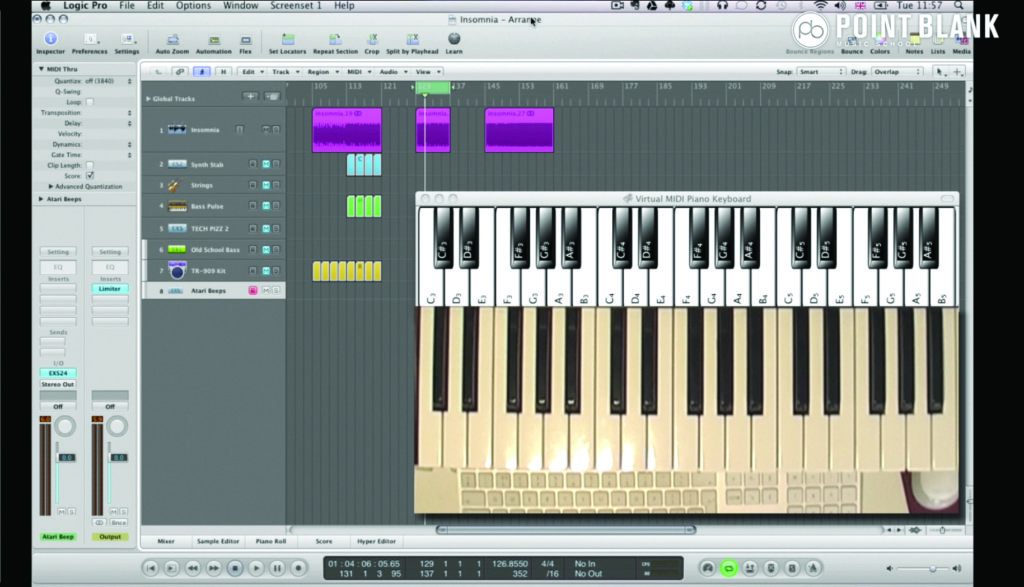 1: When deconstructing anyone else’s music, the most obvious thing to do is load up an audio track of the original so you can reference your production and tempo. Here we’ve loaded the audio into track 1 (purple, labelled Insomnia). We’ll keep on referencing this audio as we go through deconstructing it. 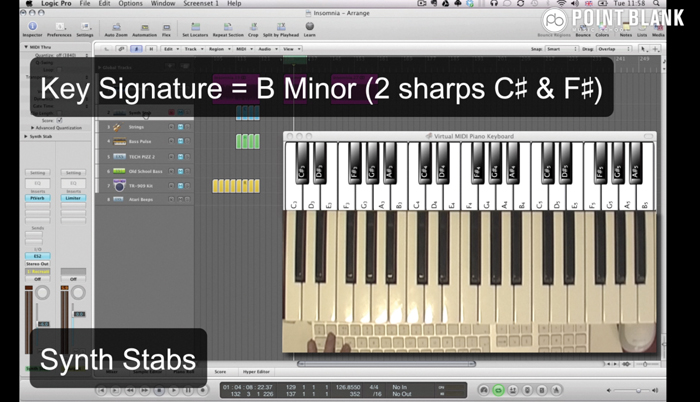 2: We want to get the key of the track, and this is an interesting one. Playing along with the audio track we identify that it is in the key of D minor, although, as we’ll see, it’s not as simple as that: to build tension, Faithless employ an out-of-key note at the start of the strings. 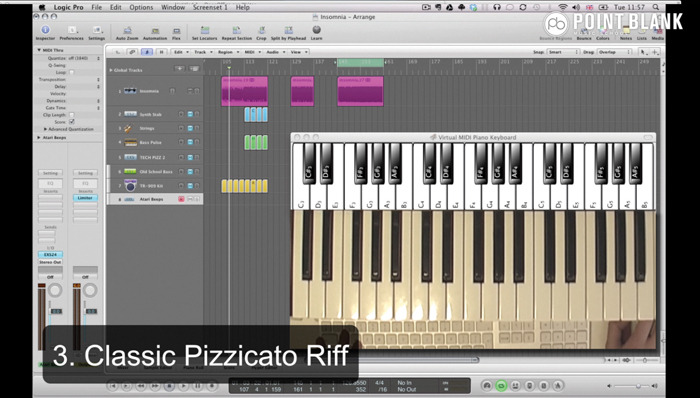 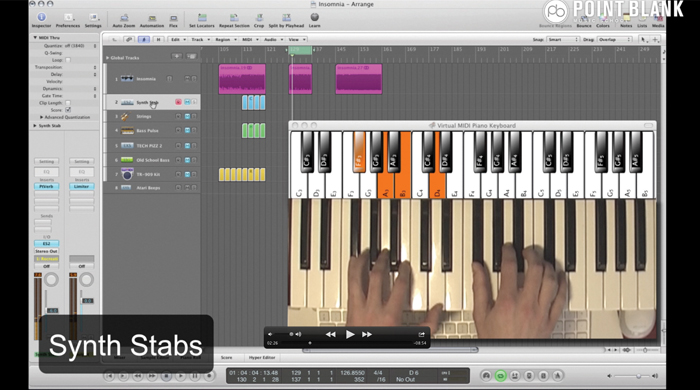 4: Starting with the synth stabs, they are simply two chords that are actually the same but played an octave apart. First, the top chord is played, then one an octave down as shown. The actual chord is a B minor 7 (second inversion). 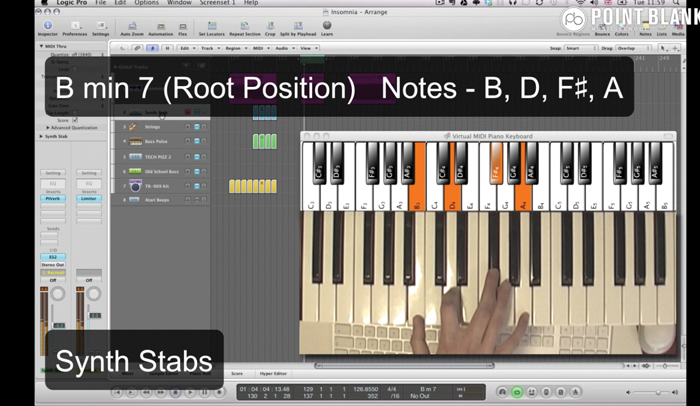 5: Let’s show you how this works if you’re not a notation fan. The root position of the B minor is notes B, D, F# and A. An inversion is simply changing the root note, so this is the original starting off at note B. The root version is shown. 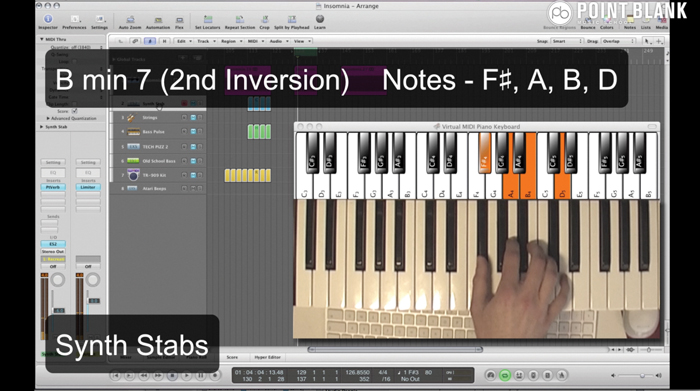 6: The first inversion moves the chord up by one note in the sequence (still playing four notes up the scale to play the chord) and the second repeats the process but moves up the chord sequence by another note to play the next four notes in the chord (still following the B minor scale) to result in the Faithless chord. 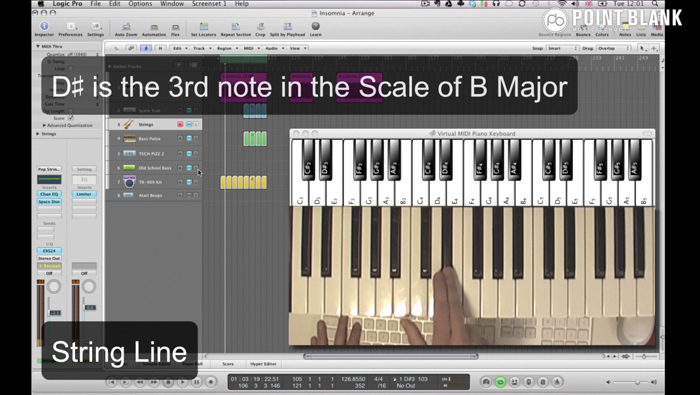 7: Who’d have thought that dance music would use chords with inversions (some might argue even just chords!) but Rollo knows his stuff. Onto the strings, and we note that they move from major to minor, with the first note identified as D#. 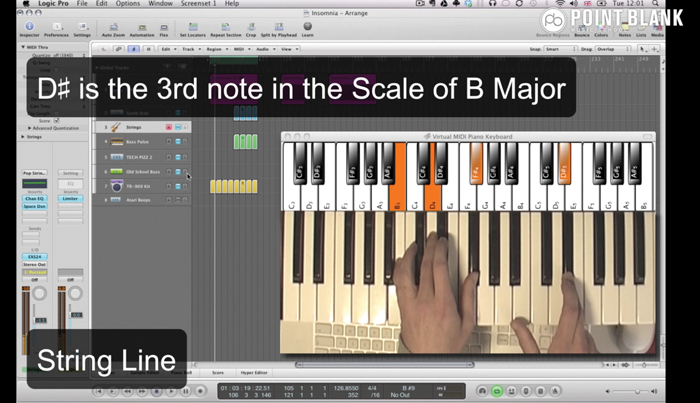 8: As the main chords we’ve already discussed are in B minor, the D# is somewhat at odds with it. Play them together as shown and they clearly don’t sound quite right, but play one into the other and you start with a tension that is resolved: a major-to-minor key change. 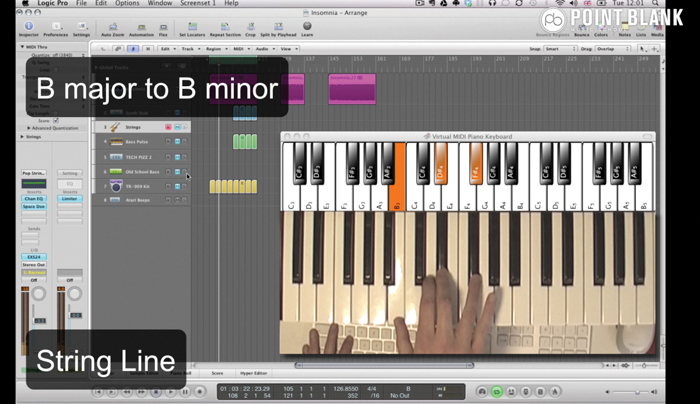 9: This simply moves from D# to D natural and takes the chord from a B major to a B minor. In the actual tune these strings come in with the B minor 7 stabs (just the top end of the octave ones) resulting in a clash that sets the tune up (and sets it apart from a lot of other dance tracks). Indeed, it’s arguably what makes the track… 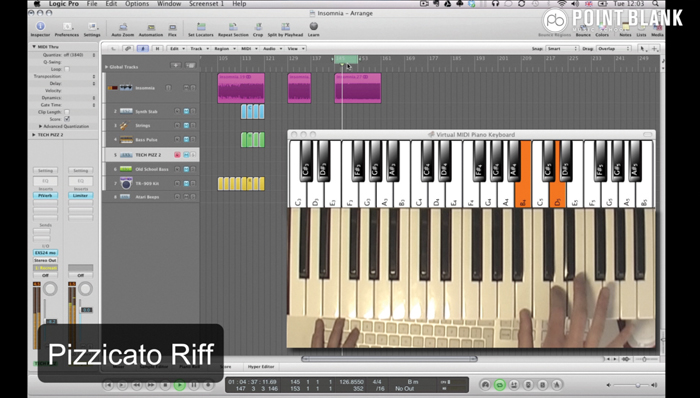 10: Now we’re onto the monster riff: the pizzicato. While we can’t call this a set of chord changes (it’s only ever two notes being played simultaneously) the subtle changes that each of these notes take across the riff are very interesting – it’s a four-bar riff, and every bar is slightly different. 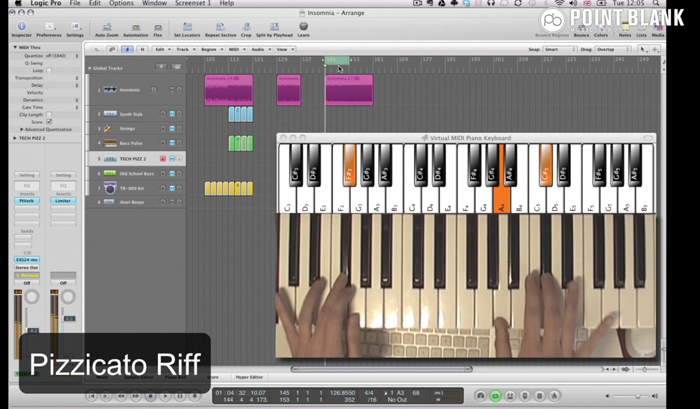 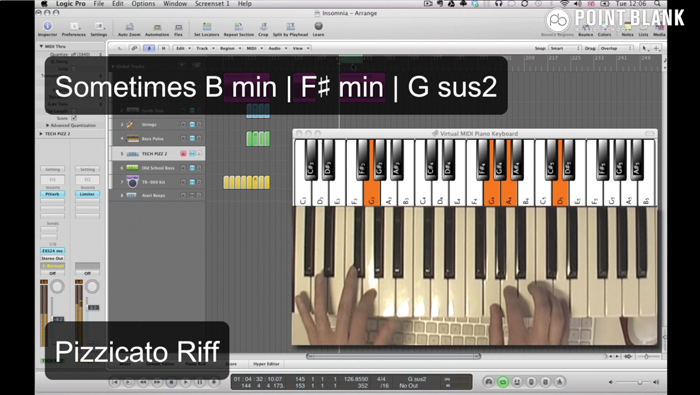 12: The resulting chords are B minor, F# and G major, with a G sus 2 replacing the third chord in the second part of the riff.