Hardware Workshop: Modular Synths – The Joy of the Maths Module

There is one module that seems to be highly visible in just about every Eurorack setup. Dave Gale asks why this should be and encourages you to do the Maths in this guide to using the Maths module A couple of strikes of lightning indicate that you are looking at the MK1 Maths module. Notice […] 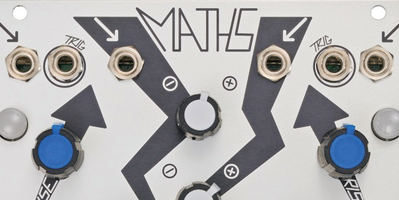 There is one module that seems to be highly visible in just about every Eurorack setup. Dave Gale asks why this should be and encourages you to do the Maths in this guide to using the Maths module 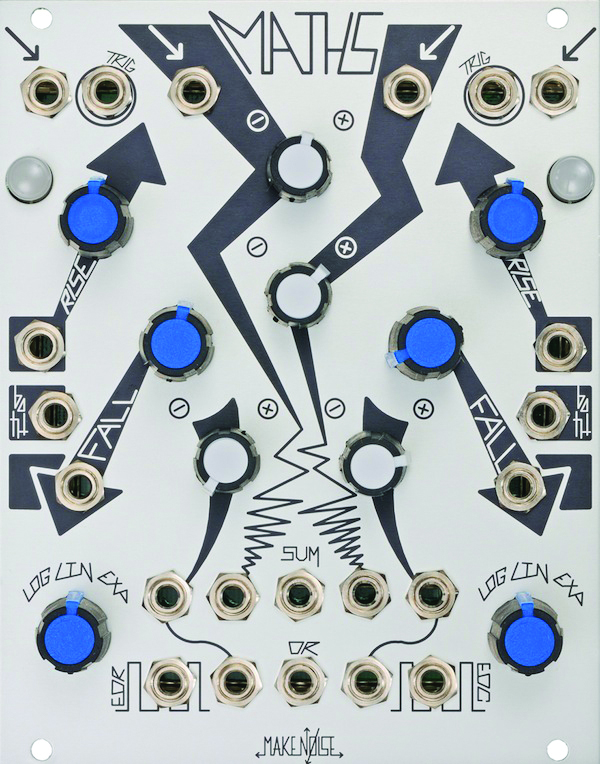 A couple of strikes of lightning indicate that you are looking at the MK1 Maths module. Notice the ‘Inputs’ at the top, indicated by the arrow!

Before we take a close look at the Maths module here’s a bit of context: I’ve been embroiled in the world of synthesisers for many years, since the 1980s in fact, and back in my youth, I would spend many an hour drooling over catalogues from the likes of Roland, wondering how, as a 14-year-old schoolboy, I was ever going to be able to afford a huge analogue polysynth that had an RRP of £3,999.

Fast-forward 30 years, and I still find myself looking at catalogues, albeit via the inter-web, and wondering how I am not only going to afford the latest piece of analogue kit, but also explain it away to my long suffering wife (I can feel her eyes rolling as I write about it). So when I entered into the world of Eurorack a while ago, I noticed that a great many Eurorack enthusiasts seemed to have one highly identifiable module in their rigs – namely the Maths module from Make Noise.

The Maths Module – You Either Love it or Hate it

So before I start to wax lyrical as to why every Euro user should know about this module, I must preface this by saying that my love of the maths module did not happen overnight, in fact it took a couple of months to really understand why there was so much joy to be found in this bundle of fun. I ultimately discovered that in the Eurorack community, Maths is akin to Marmite. Those who love the Maths do so with unbridled passion, yet those who don’t remain mystified about the fuss.

So first things first, what does it do? The straight answer is a number of things, but the more useful answer is that it is akin to an LFO, a slew limiter and an envelope, but with complete control over both the rise and fall phases.

Beyond this, Maths gets a shade more complicated, as it can do far more than the basics, and gets even more confusing when you take into account that it can even modulate itself. It’s also quite confusing when Make Noise describes this module as an “analogue computer designed for music purposes” – and so we also venture into the world of Make Noise design, where there is little in the way of readable legends to accompany sockets. This leaves the novice confused, but the experienced user feeling smug with the smallest amount of knowledge, like a theoretical physicist at Cern!

So, in unravelling this module, it’s important to know whether you are looking at Mk1 or the Mk2/2013 revision of the Maths. Mk1 is instantly identifiable, by the black lightning-strike design, which is what made this module so identifiable and ubiquitous. Before us Mk1 owners (of which I am one!) get all high-brow, with Mk2 came some revisions, along with a small change in layout which makes the Maths Mk2 far easier to get your head around… ‘Touché!’, they cry.

To the far left and far right of the Maths are mirrored channels, named 1 and 4, both of which do the same thing, much like channels on a mixing desk. At the top of both channels, there is a CV-signal input (indicated by an arrow), which will take an incoming CV and then emit an outgoing CV at the bottom end. What happens in the middle is dependent on the position of the Rise and Fall pots, which will add or subtract an additional voltage to the CV, hence the moniker Maths.

So, if you were to send a sequenced pitch CV to the CV input on the Maths, and then output it to the pitch CV input to your oscillator, the Rise and Fall controls will act as a slew limiter, adding portamento or glide as the control is increased. What’s particularly useful here is that the Rise pot will effect rising pitches, only adding glide to upward notes; whereas the Fall pot will effect notes moving downwards in direction, meaning that you can have different settings for both upward and downward glide. Exceptionally cool and useful! 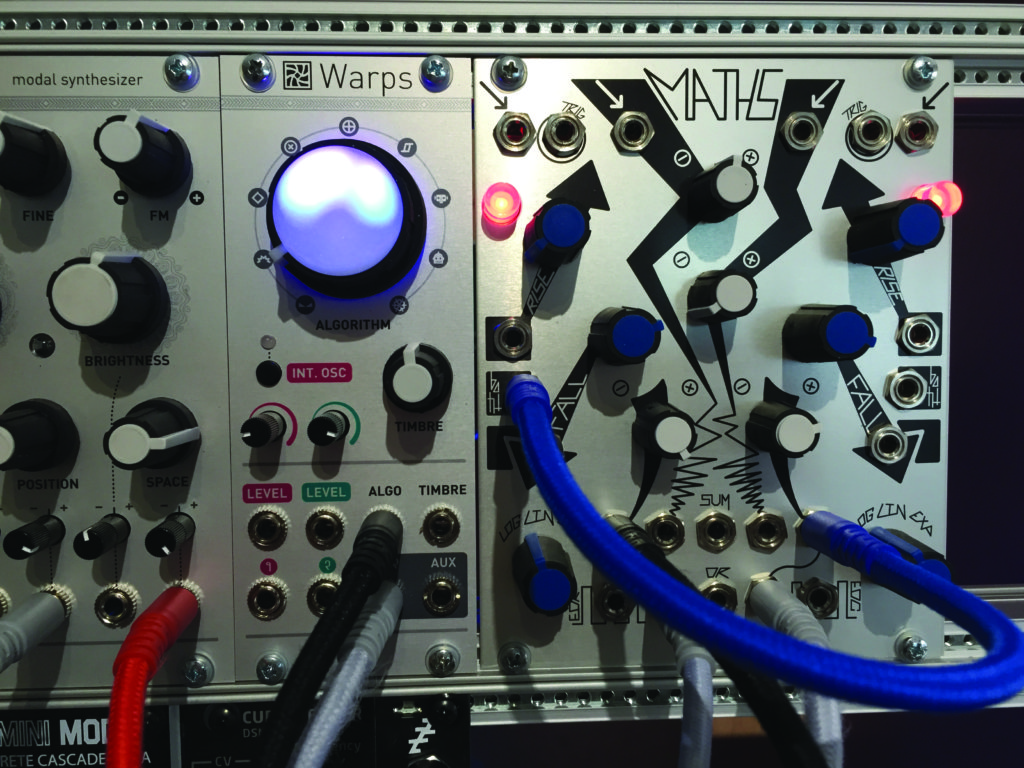 Maths patched up. Patched up and ready to do a ‘bouncing ball’-style ramp LFO, modulating the Warps’ algorithm input

If you are looking to try and pick up a Maths, you will only be able to purchase the Mk2 model from new. Having said that, the Mk1 has attracted a somewhat ‘classic’ status, in no small part due to the lightning strikes on the front panel.

There are some small upgrades to the mk2, not least of all the general layout, which has improved considerably and makes the module much clearer to use. Yet for my money, it’s lacking that quirk factor of the Mk1, which is odd for me, as I usually like function and practicality over form. Just goes to show how you get used to what you know. The Maths is in pretty decent supply, through sites such as eBay, but be prepared for a bidding war… They are very popular!

The Maths is capable of so much, there isn’t really another module that does the exact same thing, which speaks volumes about its uniqueness and also why so many Eurorack users swear by it.

However, a unit such as the Pittsburgh Modular Envelope will allow similar control and cycling of both attack and decay phases, acting much like an LFO, as will the Mutable Instruments Tides, which also boasts more functionality besides. In both cases, you do only get the one channel of operation, as opposed to the two on the Maths.

Make Noise also makes a module called Function, which offers much of the same functionality as a single channel on the Maths. This will no doubt be useful, but will lack the Maths’ extra versatility and complexity.

I Want to Ride my Bi-cycle

You might also have noticed that there is a button located next to the Rise pot, on both channels 1 and 4, which is named ‘Cycle’ on the Mk2 Maths (we Mk1 Maths owners are psychic and know that it’s the Cycle button, despite the lack of description – it also glows red).

When this button is pressed, the Rise and Fall elements will cycle, much like a traditional LFO. However, you will again have complete control over the rising and falling elements, meaning you can create both LFO and AD envelope-style CVs, to send in all manner of directions. Applying this output to a CV-pitch input on an oscillator will yield very obvious results, but will be a very cool effect to apply to the old standard of the cut-off frequency of your filter.

I should also mention at this point that there is an attenuation control available to attenuate the CV level being emitted, which is incredibly useful if your signal is a shade hot, as it can so often be with the Maths module.

Armed with this basic information, you have a small list of what the Maths is all about – so if you also throw in the fact that the ‘so far ignored’ channels 2 and 3 are high-level attenuverters, you can start to see how useful this unit can be. In fact, it goes far further, as you can take a patch cable and feed an output from channel 1, to an input on channel 4, or more likely, use channel 1’s mathematical output to control something like the fall on channel 4.

Through this process, you can create the legendary effect which is known as the ‘bouncing ball’; taking an output from channel 4 and running the input into the ‘both’ input of channel 1, when both channels are placed in cycle ‘on’ mode, one will modulate the other, creating an ever increasing frequency of ‘bounce’. Keep the Rise controls low for maximum sharpness to the bounce itself. 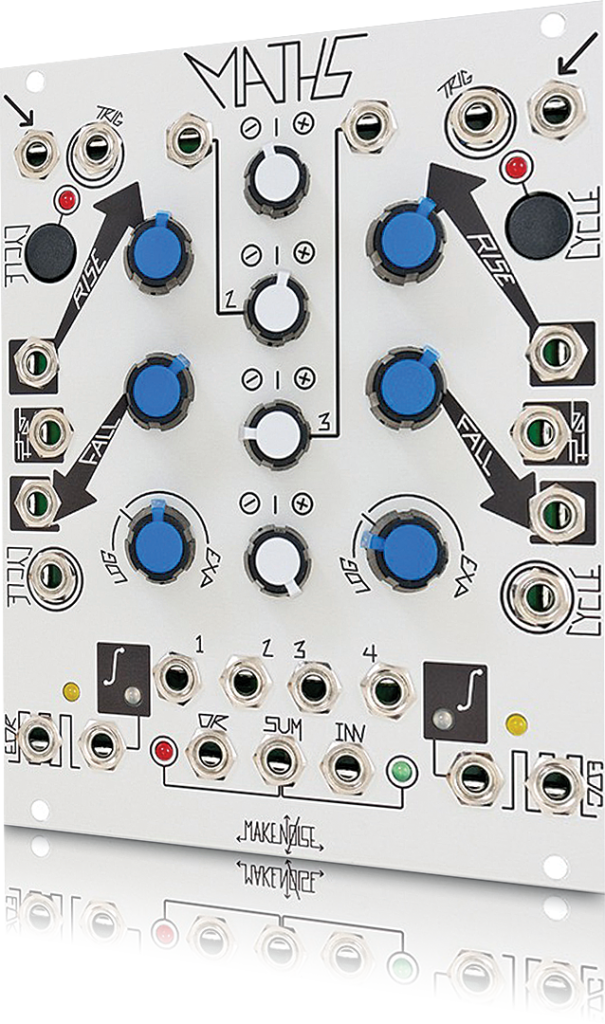 The Maths module Mk2. Form takes centre stage, as the lines are far more clearly defined with the Mk2 Maths. There are more legends and descriptions too.

It’s also worth mentioning that there is a ‘summed’ output on the Maths module, that will allow the user to take a signal of all parts and run it in a location of their choice, added to which, there is also a sweepable control that will switch the arc of the output, from linear to logarithmic to exponential, for ultimate output control.

So there it is – the joy of Maths. A friend of mine, who is not a lover of Marmite, said: “It just seems to make bleepy noises”, which – for some – it does. But
it’s also such a versatile unit that it demonstrates the nature of what a multifaceted module of this kind can do, and it can also be so damn useful to boot.

If you’re not sure whether the Maths module is your strong suit but fancy a look, buy one on eBay, try it out, and if you hate it, sell it for the price you paid. Nothing ventured, nothing gained…

But I have a sneaking suspicion that once tried, you’ll scratch your head, then you’ll keep trying until the penny drops, and you’ll feel like that theoretical physicist at Cern.

Find out more about the Maths Module here