Now that you’re armed with the know-how from part 1 it’s time we got hands-on with making brilliant beats. Here we’ll show you how to program beats for 7 different genres. Let’s get stuck in… Programming hip-hop 1. Like jungle and breakbeat, hip-hop is another beat sometimes best sampled, but programming it is just as […]

Now that you’re armed with the know-how from part 1 it’s time we got hands-on with making brilliant beats. Here we’ll show you how to program beats for 7 different genres. Let’s get stuck in… 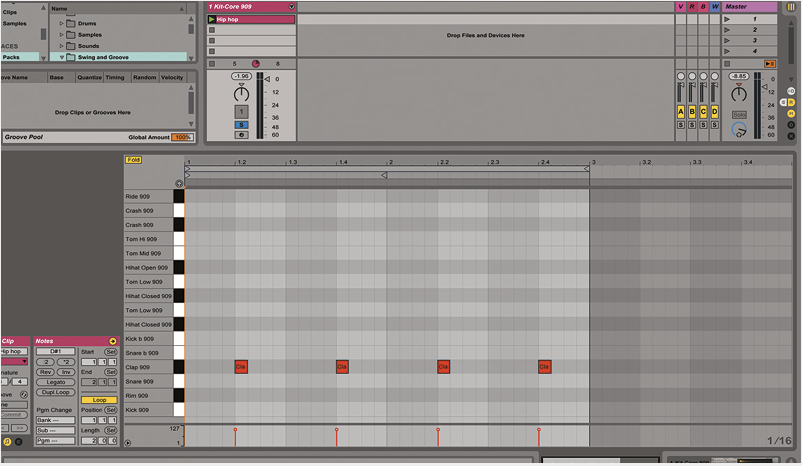 1. Like jungle and breakbeat, hip-hop is another beat sometimes best sampled, but programming it is just as easy. Take your tempo down to a cool 100 BPM and start with the snare on the 2nd and 4th beats. 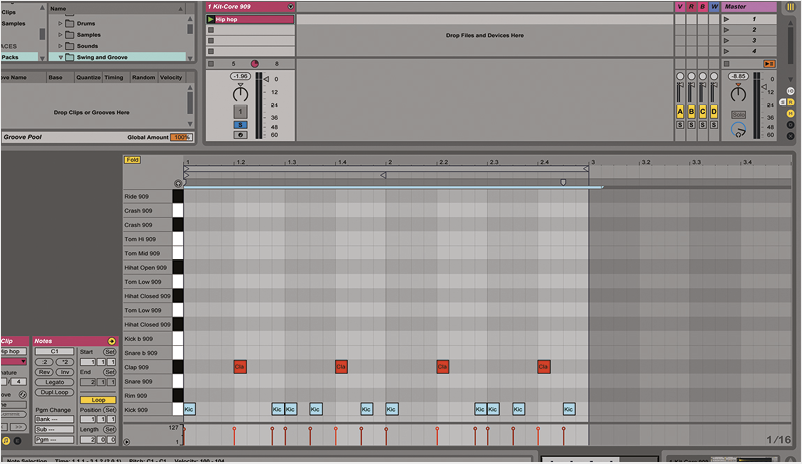 2. Adding the kicks as so (at the start of beats 1 and 3, with three others mixed in) and you have the standard hip-hop beats that launched a million records. 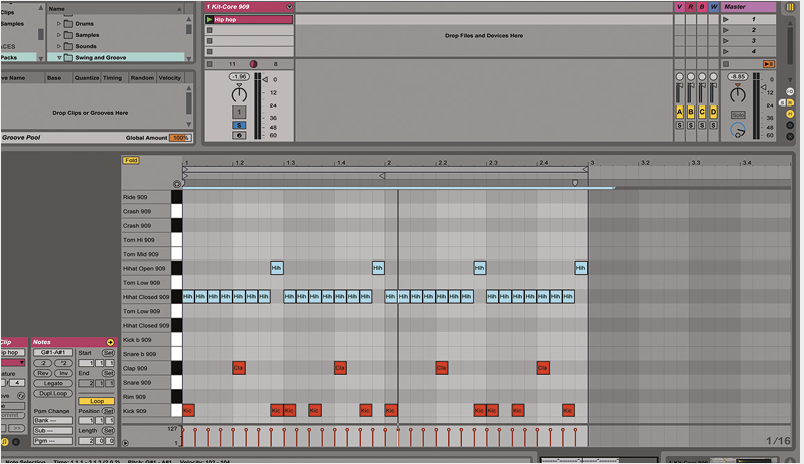 3. Now draw in seven closed hats and an open hat over each of the two bars. This is pretty much it, but you can add anything else from here. 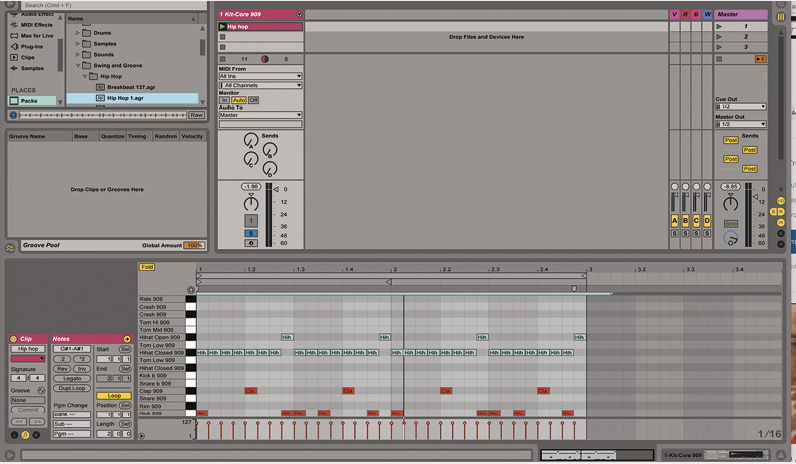 4. As with our grime tutorial, hip-hop could do with some swing being added. We’re doing this tutorial with Ableton Live, which has its own groove templates, including hip-hop ones. 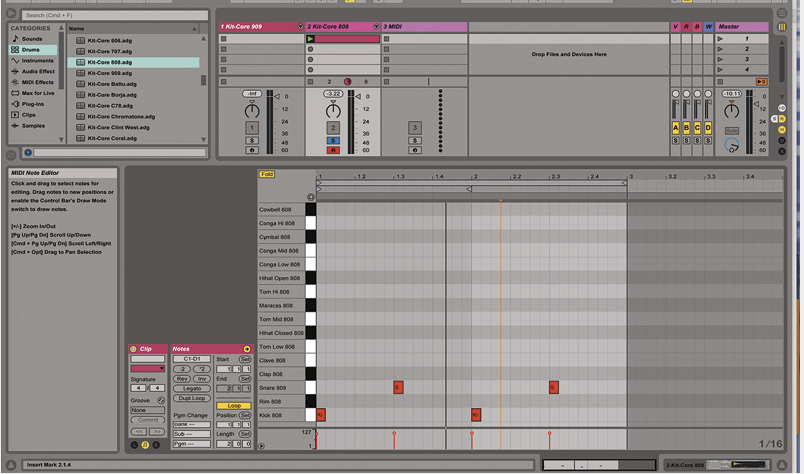 1. Trap starts off as one of the simplest of beats, with a kick at the start of the bar and a snare on the third beat of each bar and a tempo of 135 BPM. It couldn’t get any easier. 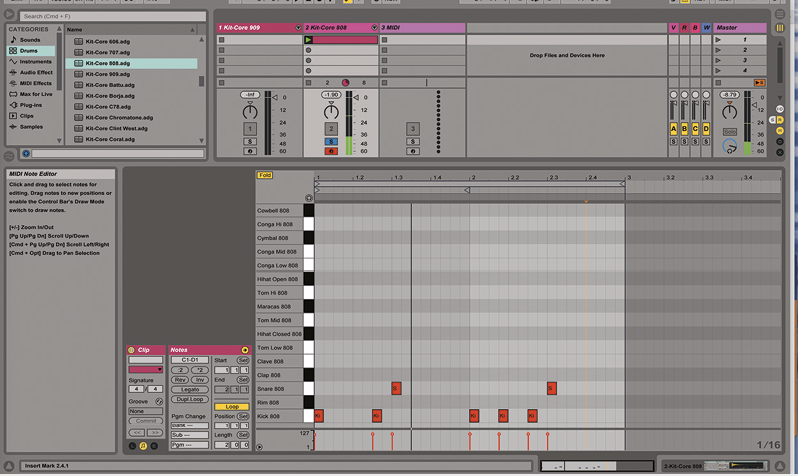 2. As ever, it’s the kick that defines things early on, though. Place another kick between beats 2 and 3 of the first and second bar and another on the offbeat of bar 2, as shown. 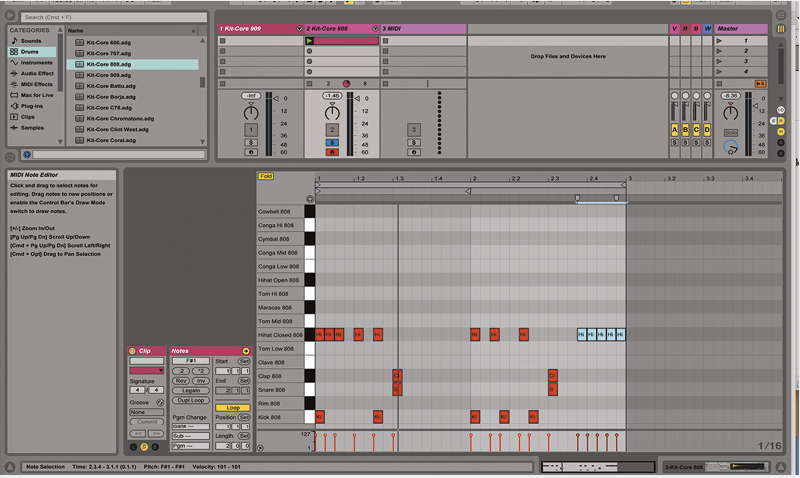 3. This gives the groove an almost swing-like nature. We’ve added a clap on the snare to give it a crisper edge, but the closed hats really define this beat. 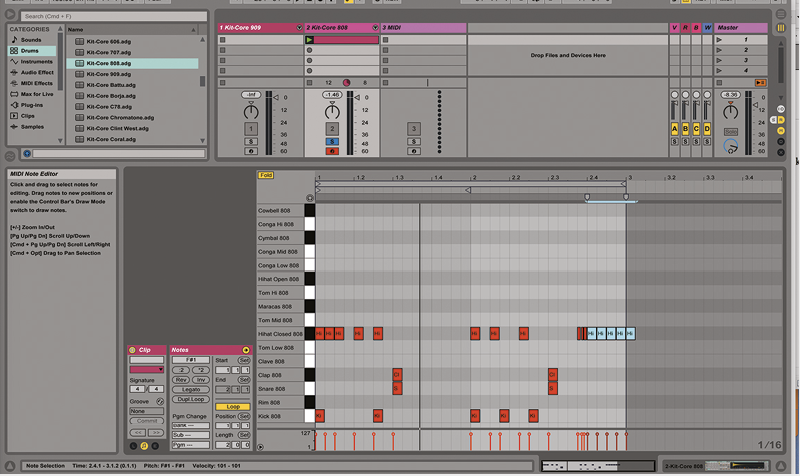 4. They need to open with three quarter notes at the start of the first bar and then half notes. A real flourish comes at the end, where you can close with 1/8th or even 1/16th beats. 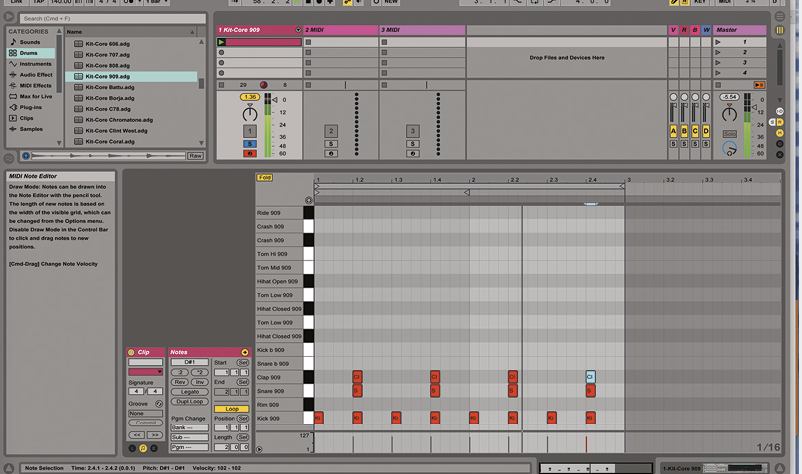 1. Choose a tempo of 140 and a 909 kit and draw in a kick on the four beats of each bar and a snare and/or clap on the second and fourth beats. 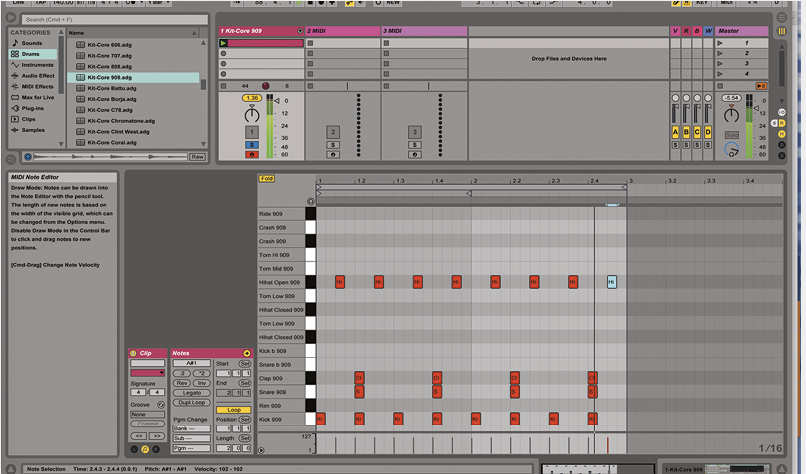 2. Now draw an open hi-hat on the offbeat between kicks – so eight in total, over the two bars. This is the basis of a lot of dance-music beats… 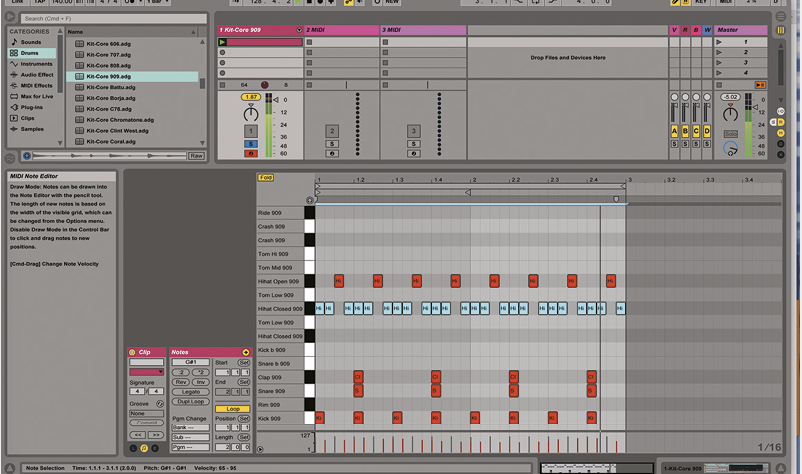 3. The closed hat is important in trance, as it gives a lot of energy. Draw it in, but make sure it doesn’t sit on top of the open hi-hat, as shown. Reduce its velocity, too. 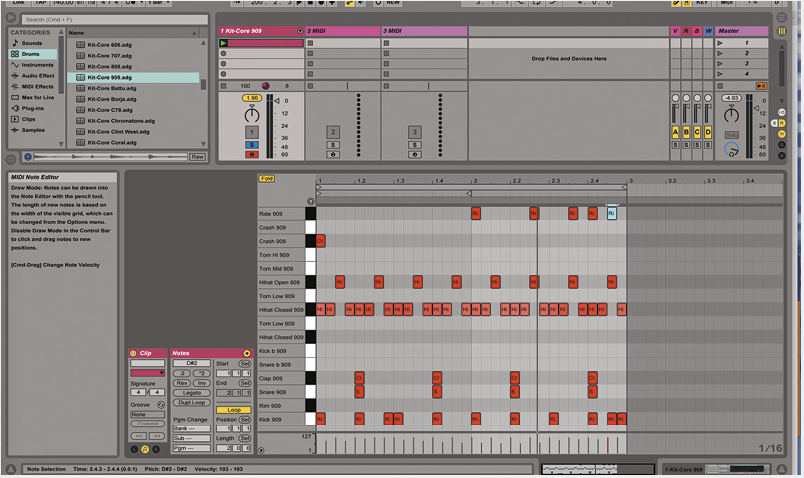 4. We’ve added a crash at the start of the loop, which would be good to add impact after a breakdown. A ride cymbal adds a bit of 90s nostalgia! 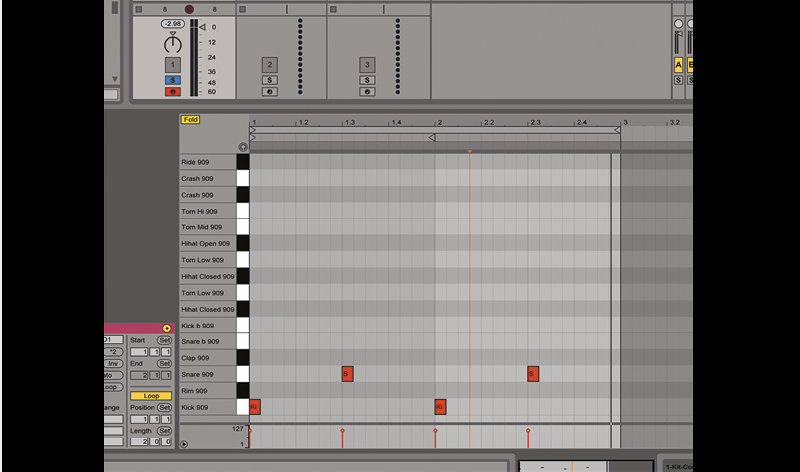 1. Dubstep shares some of the beats of trap and can have a similar tempo (140 BPM) and swing. It also relies on closed hats, but the way these are employed give it a very subtle difference. 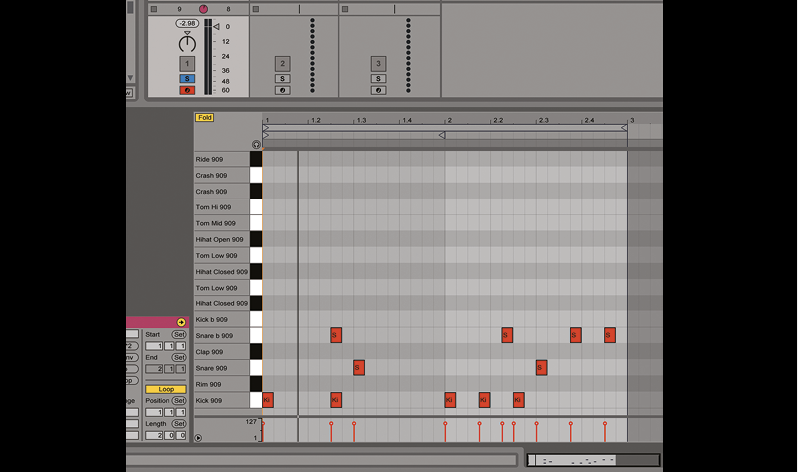 2. Again, add a second kick on the offbeat for swing, but now we differentiate it more from trap by adding a different snare – this time to give it more of a shuffled nature. 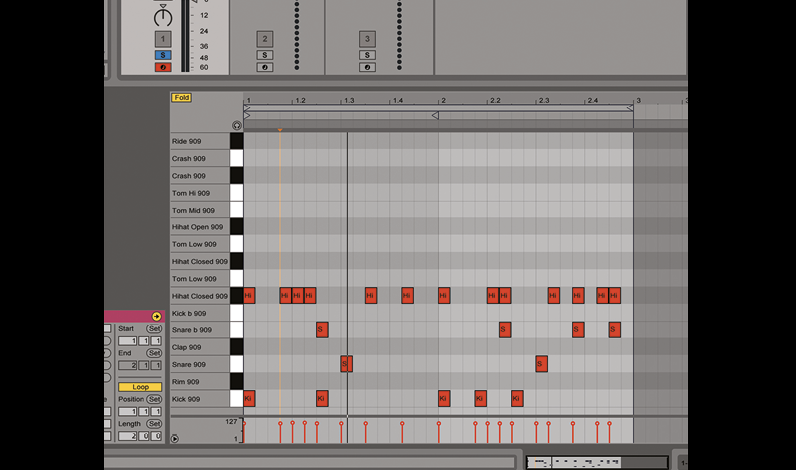 3. The closed hi-hat is again so important – almost as much as the kick – giving the beat a certain jitter as it opens on bar one and closes bar two. 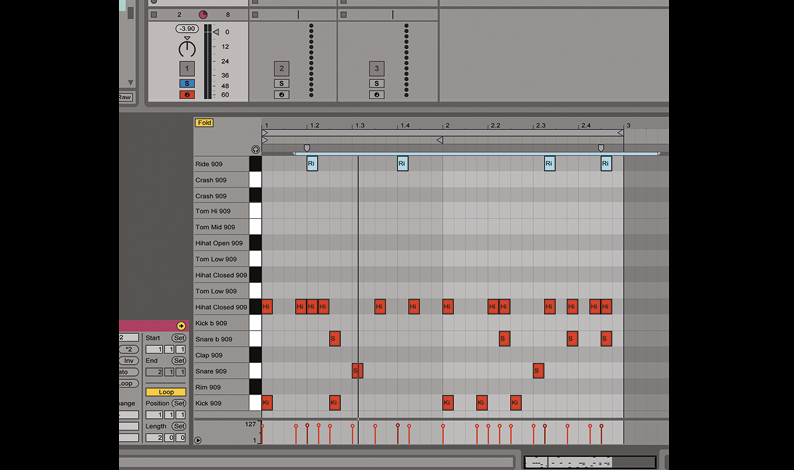 4. You can go mad adding lots of fills, but we’ve added a ride cymbal on beats 2 and 4 of the first bar to pin the first half down and then made it a little more random on the second bar.