How To: Smartphone Sound Design in 9 Simple Steps

Where do you go when you’ve exhausted all the usual synth presets and drum sounds and you’re looking to be a little bit different? Dave Gale gets creative with smartphone sound design and demonstrates how you can discover new sounds that you’ll find lying around the house… A few years ago, a well known computer […]

Where do you go when you’ve exhausted all the usual synth presets and drum sounds and you’re looking to be a little bit different? Dave Gale gets creative with smartphone sound design and demonstrates how you can discover new sounds that you’ll find lying around the house… 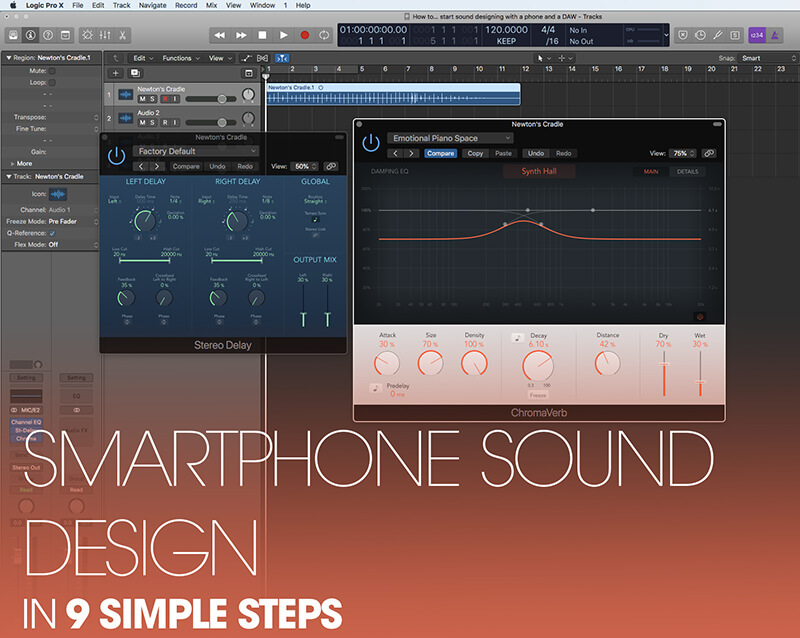 A few years ago, a well known computer company ran a series of advertisements featuring fantastically-creative iconoclasts, inviting us to ‘Think Different’. Searching beyond this singular strap-line a few years later, I started to develop an interest in finding different sources of sounds, leading me to explore sound creation in both software and hardware synthesisers, and ultimately thinking outside of the box.

This is all very well if you have the money to invest in tech, but it’s actually surprisingly easy to create something different and otherworldly with items you may already have, such as a simple mobile phone, computer and DAW.

Any viewers of the Channel 4 comedy Peep Show will doubtless recall the small but identifiable musical ident, which largely consists of popping sounds. These were created by composer Daniel Pemberton while he was on holiday, stumbling across a well which offered the most amazing reverberation. Daniel got his phone out, recorded some popping sounds, got them home and used them on a show which would then be beamed to millions of people every week! 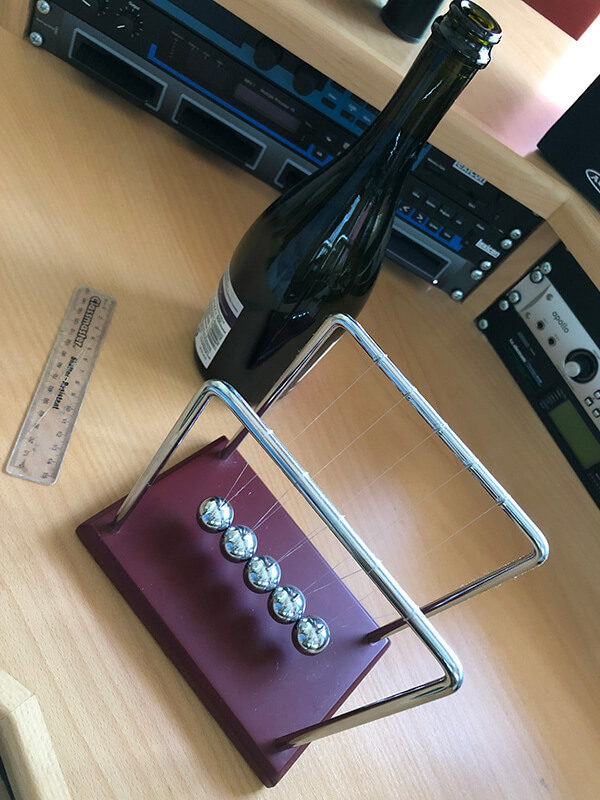 1. So let’s start by finding something interesting to record. You don’t need money for this, or even necessarily a musical idea at this stage – having a little intention to make a cool sound is just perfect. Your source for recording could be a ruler being twanged on a desk, a bottle being blown in a sustained fashion or, in this case, I’m going to record a Newton’s Cradle.

When hunting out the best things to record, don’t get too hung up on how it might sound; once it’s in the DAW, we can mutate it within an inch of its life, making it sound longer or shorter, higher or lower, and far more besides. 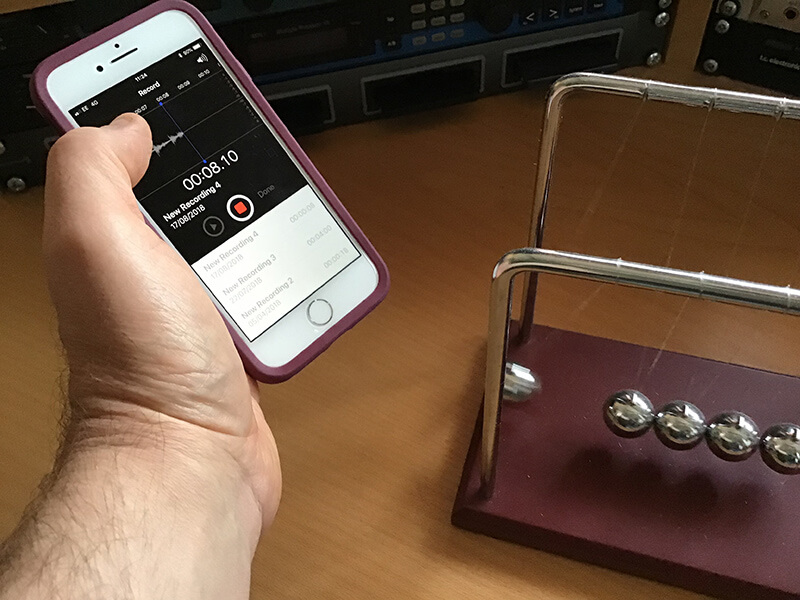 2. I’m going to capture my audio using my iPhone’s Memo Record feature, placing the phone to the side of my Newton’s Cradle. However you can also use a mic to capture your source audio, if you have one to hand.

Although a phone might not sound quite as sharp as a signal recorded with a decent microphone, the grittiness may well add colour that you might not normally expect. Having a phone is also very convenient when out and about; if you hear something cool, whip the phone out and record it. You never know when it might be useful.

3. If you’ve recorded your audio straight into your DAW using a mic, your audio will be right where you need it, but if it’s currently on your phone, transference to computer has never been easier.

The simplest method may well be to email yourself the file, but if the file is large, you might prefer to drop it to a cloud-based solution to make it immediately accessible on your desktop. A particular favourite with Mac and iPhone users is the Airdrop facility, which will take your file and drop it straight onto your Mac. 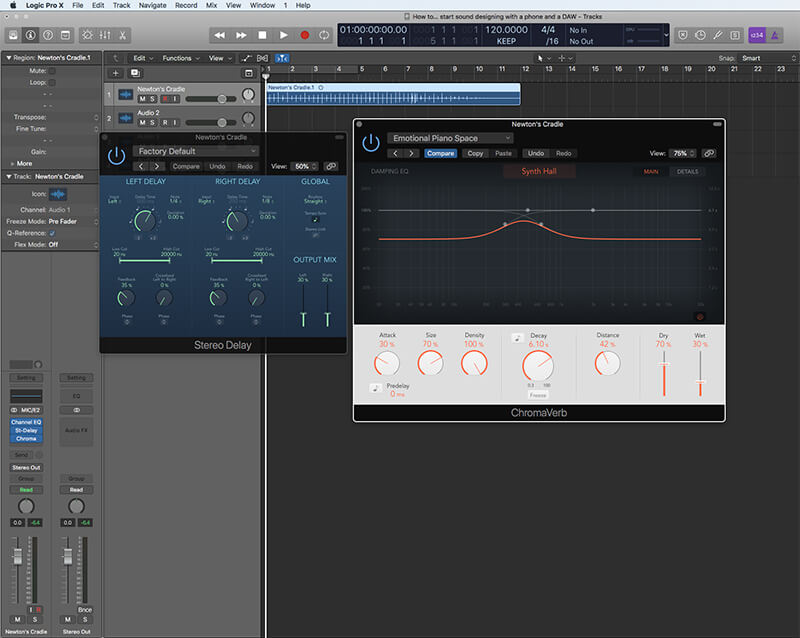 4. Once your sound is in the DAW, we can start to carve things up. First things first, have a play around with some effects and see what sounds cool. Even the addition of a long reverb or delay may be enough to get you excited about your new sound, but let’s also explore some other possibilities. 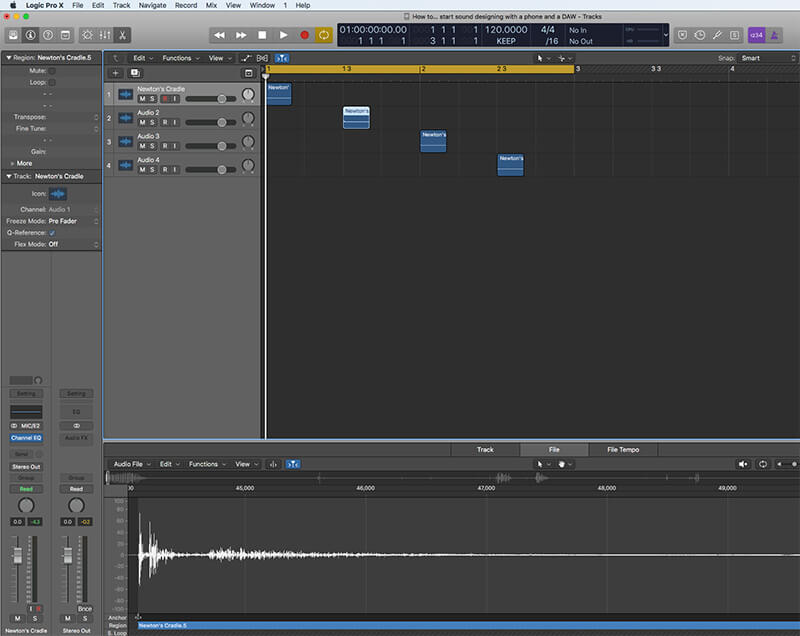 5. In the case of my Newton’s Cradle, I have a click-clack type sound, which I have an idea for. This will involve taking four individual strikes and creating a rhythmic loop, altering each instance of clack with a different style of effect. So my first task is going to be to splice up my recording, so that I can have individual control over each of my clacks. To increase the possibilities further, I’m going to place each instance on a different track, to allow for different settings. 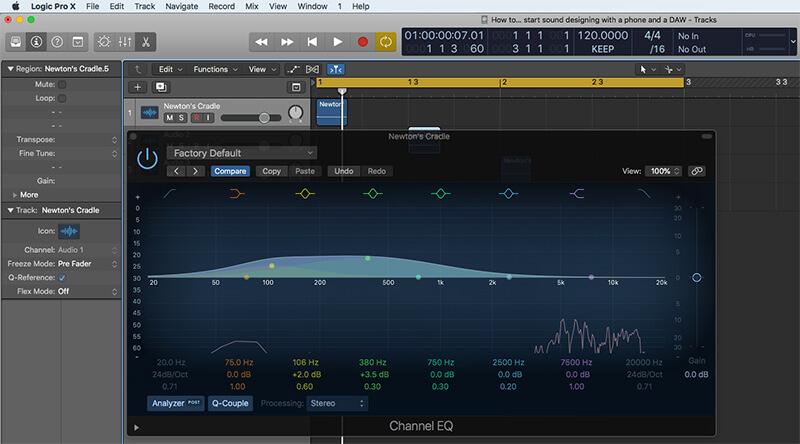 6. My first clack is going to remain untouched, except for a degree of EQ, to give a little bit of body by adding some lower mids. 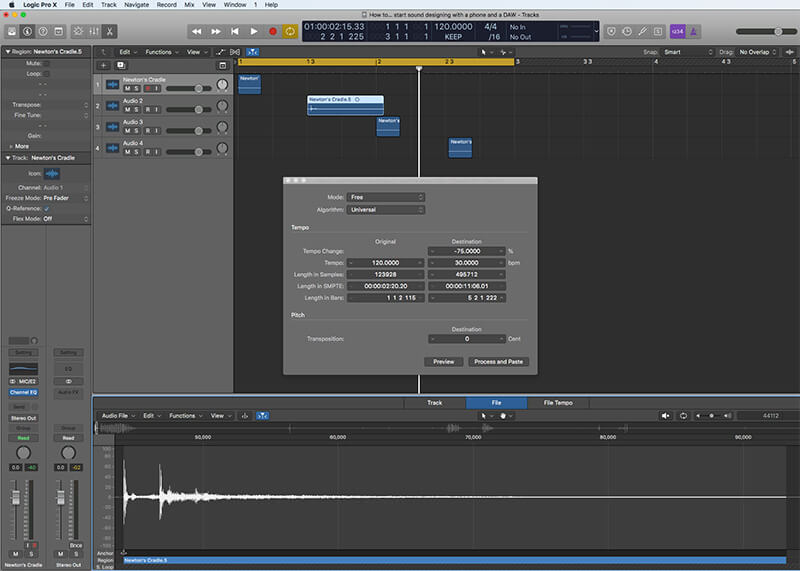 7. My next clack is going to undergo something more life changing. It’s important to point out at this stage, that all of the plug-in effects that we have available within a DAW fall into the category of non-destructive plug-ins.

This means that it’s possible to apply an effect such as pitch shifter without changing the original recorded audio. However if we delve into the Audio edit menu, we’re likely to find a host of features that will destructively change the sample. Once applied, these elements can be undone, via the usual software-based Undo feature, but they do intrinsically change the structure of an audio file, often in harmonic structure, pitch or time.

What I want to do here is extend the timing element of the file, without changing the pitch, which is a technique known as Time Stretching. As I’m working in Logic, I’ll be using the Time & Pitch Machine, located in the Audio Edit section.

The Time & Pitch Machine offers two columns, which are akin to before and after. Changing settings in the right hand column, which in the case of my Time Stretching requires me to select a slower tempo, will start to yield great results. Apply the same process a second time, and the effect will become even more exaggerated. By extending the audio file, interesting harmonics and timbral content will start to become clearer and exaggerated, offering all manner of sonic colour, while also making my clack sound exceptionally interesting. 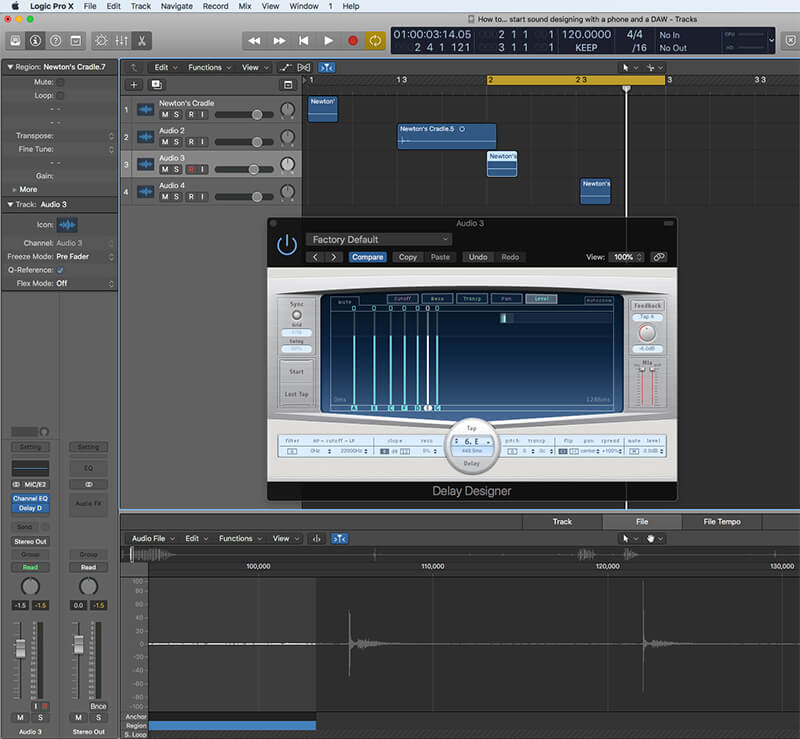 8. My third clack is going to benefit from a delay which increases in speed as the repeat occurs. This could be created using a tape delay-style effect and some automation, but I am going to plump for the Delay Designer in Logic, allowing me to draw repeats, as required. 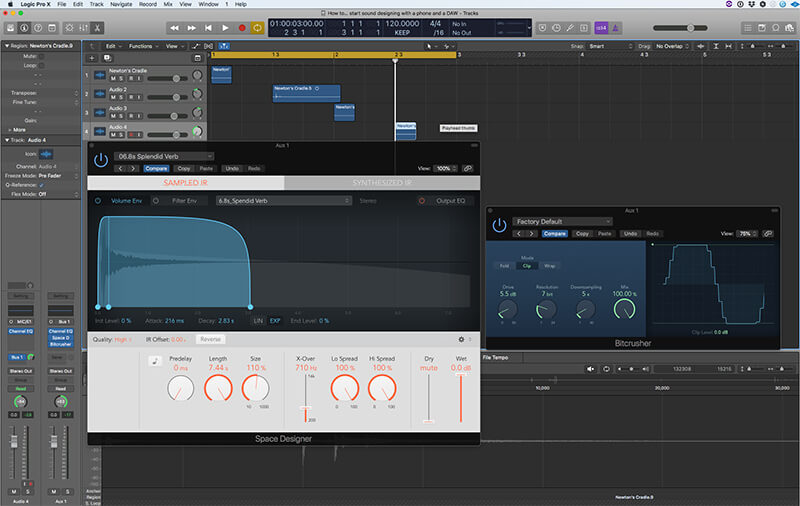 9. My fourth and final clack sound is going to feature a dirty reverb, which will be heavily panned. I’ll start by panning my source audio to one side, while bussing the signal to some effects which I am going to place on the opposite side of the stereo image.

I want something which has plenty of control, so I’m going to plump for the use of the Space Designer reverb in Logic, as it will allow me to control the tail of the reverberation very easily, using the central display.

I’m also going to add a healthy dose of distortion, in the shape of bit-crushing, which will create a really interesting sound as the back end of the reverberation decays. Lowering the number of available bits will not allow the reverb to tail off naturally, thus creating steps in the decaying signal. The further addition of delay at this stage will lessen this effect, if required.

And so we’ve created a really interesting sonic sound-stamp from something that was just lying around the house, but turned it into something different, which is entirely unique to this moment and could become a bedrock for your next track. Certainly, we could take this basic concept a lot further, adding greater rhythmic interest or even degrees of pitch, if your chosen sample lends itself, and in a similar sense, loading your audio sound bite into a sample player plug-in will yield interesting results.

The watch word for all of this experimentation is ‘creativity’; we have specifically approached this exercise from the perspective of making a cool and interesting sound, and if you’re anything like me, that will inspire musical creativity.