With eight plug-ins covering distortion, Logic Pro X offers everything from soft saturation to aggressive fuzz. Mark Cousins gets crunchy… Engineers have long used distortion as a means of adding ‘mojo’ to a sound – whether it’s a touch of drive across some drums, or some aggressive distortion on a synth bass. Logic Pro X […] 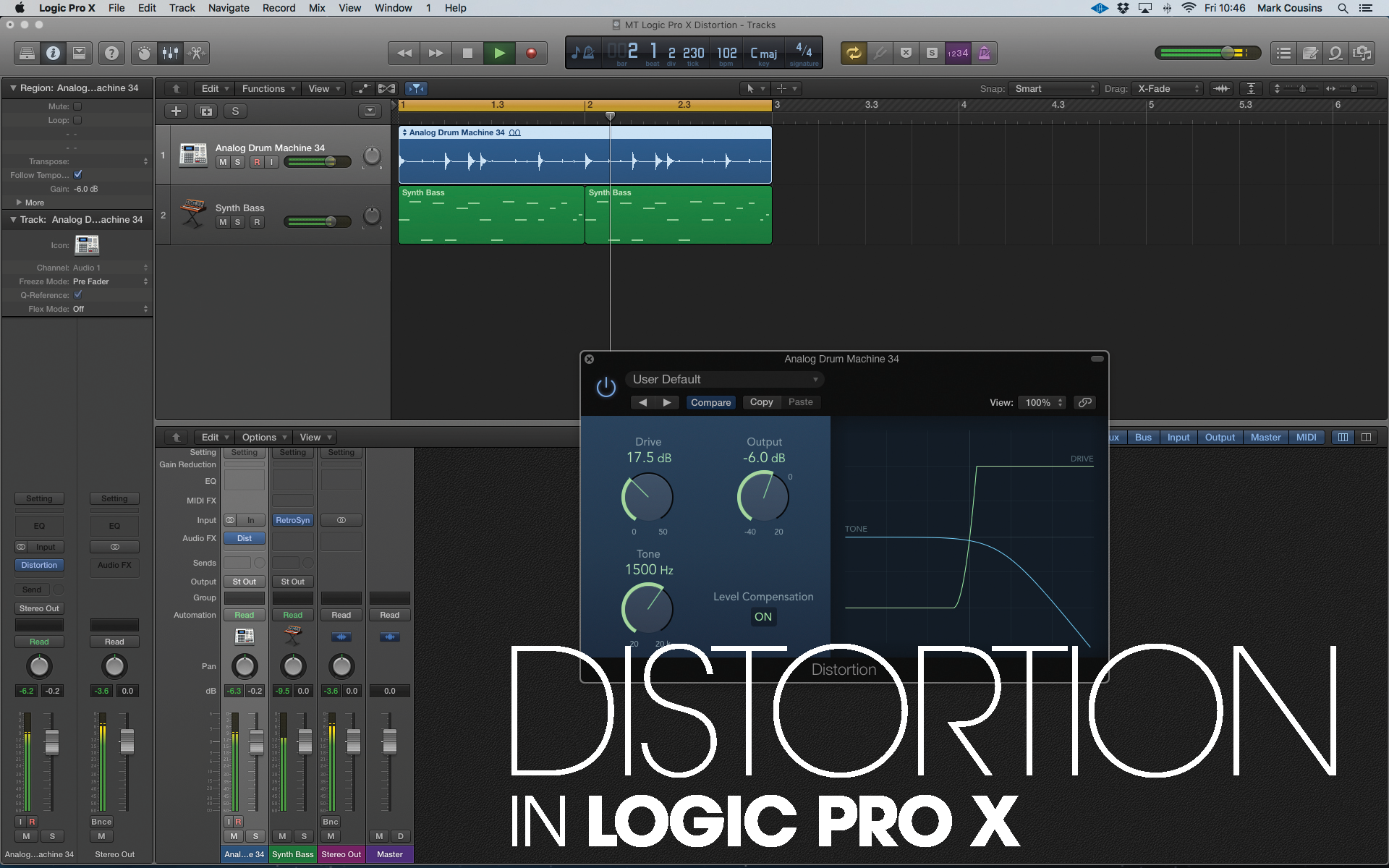 Engineers have long used distortion as a means of adding ‘mojo’ to a sound – whether it’s a touch of drive across some drums, or some aggressive distortion on a synth bass. Logic Pro X has a bewildering selection of plug-ins from the versatile Distortion and Overdrive plug-ins, to more guitar-friendly options like Pedalboard. Each plug-in offers a slightly different approach and characteristic of distortion.

Distortion can be highly effective applied as a subtle tool, adding drive and character to an input rather than it sounding notably distorted. In other examples, you’ll want to use Distortion as a noticeable effect, where the sound is mangled to a point where it’s (almost) unrecognisable from the original source.

Distinguishing between these two contrasting approaches, therefore, and the plug-ins you can use to achieve them, is a key component in using Logic Pro X’s distortion plug-ins effectively.

For simple, relatively transparent applications of distortion, you’ll want to use the Distortion, Overdrive, Distortion II and Bitcrusher plug-ins. These all benefit from a relatively simple control set, and when applied discreetly, don’t necessarily result in the input being completely covered in distortion. Two initial stalwarts are Overdrive and Distortion.

On the whole, Overdrive is the subtler of the two plug-ins, producing a warm form of distortion associated with FETs. Distortion, on the other hand, models the distortion produced by solid-state devices, which tends to have a slightly harsher tone.

On the whole, you’ll probably want to contrast two different basic sounds – one that creates a warmer ‘vintage’ tone with a small amount of high-frequency tone attenuation and another that preserves the bright timbre by leaving the Tone in its open setting.

One of my favourite tools for adding drive and colour is the Bitcrusher plug-in, which models the characteristic distortion added by the analogue-to-digital (A/D) conversion process. Using a small amount of Drive combined with a lower Bit Rate (like 8-, 12- or 16-bit) instantly gives edge to a sound, but in a way that contrasts nicely with the analogue-like drive introduced by the Overdrive and Distortion plug-in. Pushed harder (with a noticeably grungy Bit Rate and some Downsampling introduced), Bitcrusher sounds anything but polite, turning a range of sounds into instant Chiptune.

We’ve now started to move beyond softly saturated tones and into the realms of distortion producing a deliberately mangled output. For noticeably distorted sounds, you might want to move beyond what Overdrive and Distortion alone can offer and look at other sources of distortion; like Amp Designer and Pedalboard, as well as using other plug-ins that complement and enhance the characteristics of distortion.

Plug-ins Distortion II is ported from the distortion section of the Vintage B3 Organ instrument, and is a good alternative to the analogue-like saturation of the Overdrive plug-in, particularly using the two Class AB Type settings. It’s Tone control is based on a high-pass filter; Distortion’s is based on a low pass.

Pedalboard’s collection of Distortion pedals – like Rawk! And Monster Fuzz – delivers a rich, fuzzy distortion that sounds great on aggressive synths. Pedalboard is also a good place to explore the possibilities of tone stacking, where the distortion isn’t applied as a single-stage effect, but instead uses a number of different pedals together.

Another useful feature of Pedalboard in respect to tone stacking is the ability to run two separate busses – A and B – so that the distortion can run in parallel. This is particularly useful for wide stereo distortion, where two different distortion channels are panned left and right respectively.

Amp Designer creates distortion from a virtual amp head with additional speaker simulation. Much like the Tone control on the Distortion and Overdrive plug-ins, the speaker simulation can be used to tame the excessive high-frequency content created by distortion. Indeed, you can even use the Clean Preamp option as a means of using Amp Designer as the back end to a distortion chain either created with Pedalboard and/or individual distortion plug-ins.

Likewise, an Amp-only setting – without the speaker modelling – has a bright, crunchy distortion which is a good alternative to the Distortion and Overdrive plug-ins. For more extreme distortion effects, add a few effects before the distortion. Compression and EQ can have a big effect on the behavior of the distortion.

More plug-ins Phase Distortion has a more abstract sound, being based on a modulated delay line rather than a traditional non-linear amplifier. Phase Distortion’s unique ‘warbly’ sound is a somewhat niche effect, although it can produce some interesting results on drums.

Compression, for example, changes its dynamic qualities, effectively providing more ‘meat’ for the distortion to work with. Likewise, EQ influences the tone of the distortion, and is particularly effective where the input is placed in a narrow part of the sound spectrum, producing a unique lo-fi treatment.

Logic Pro X’s arsenal of distortion plug-ins, though overwhelming at first, offers a wealth of creative opportunity. Master them and you’ll give your mix edge and drive without the original instruments being degraded. Likewise, extreme distortion – pushing plug-ins like Bitcrusher into more aggressive treatments, or tone-stacking multiple fuzz pedals in Pedalboard – can mangle instruments and produce levels of aggression and bite no other plug-in can deliver. 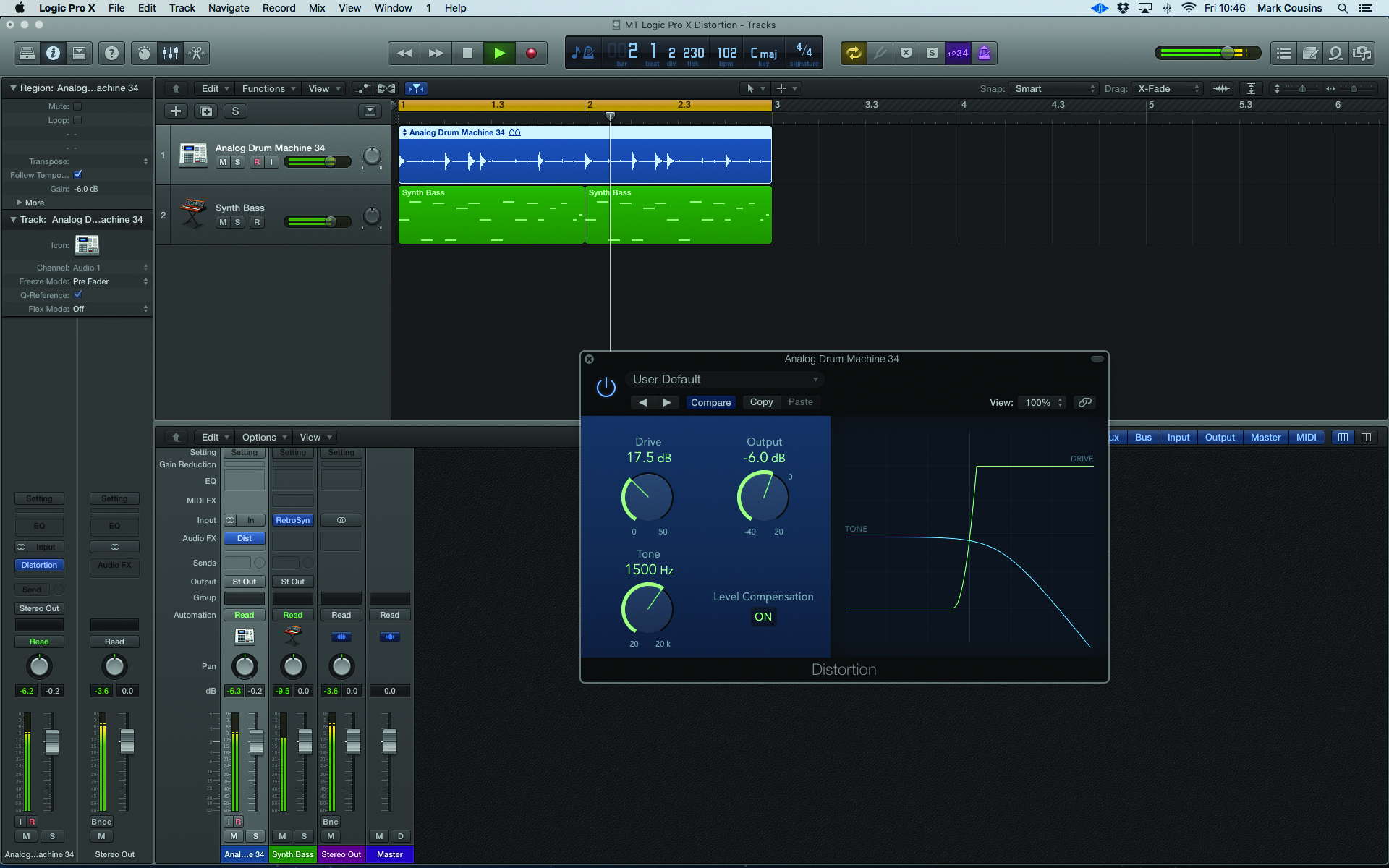 1. Working with the drums on track 1, insert an instance of the Distortion plug-in. For a simple distortion effect, position the Output to -6dB, set Level Compensation to ON and adjust Drive to get the desired amount of extra crunch. 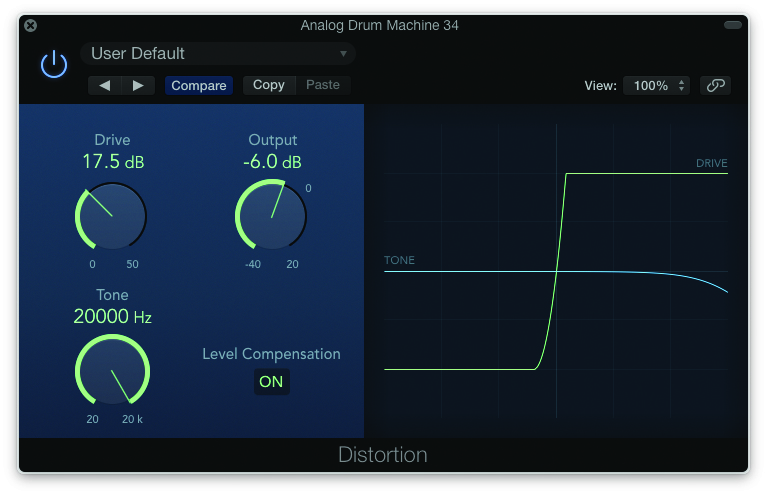 2. Distortion creates lots of added harmonic material, dependent on the amount of Drive. By default, Tone attenuates a proportion of the harmonics, but by increasing it to 20,000Hz, you hear the distortion in its full ‘brightness’. 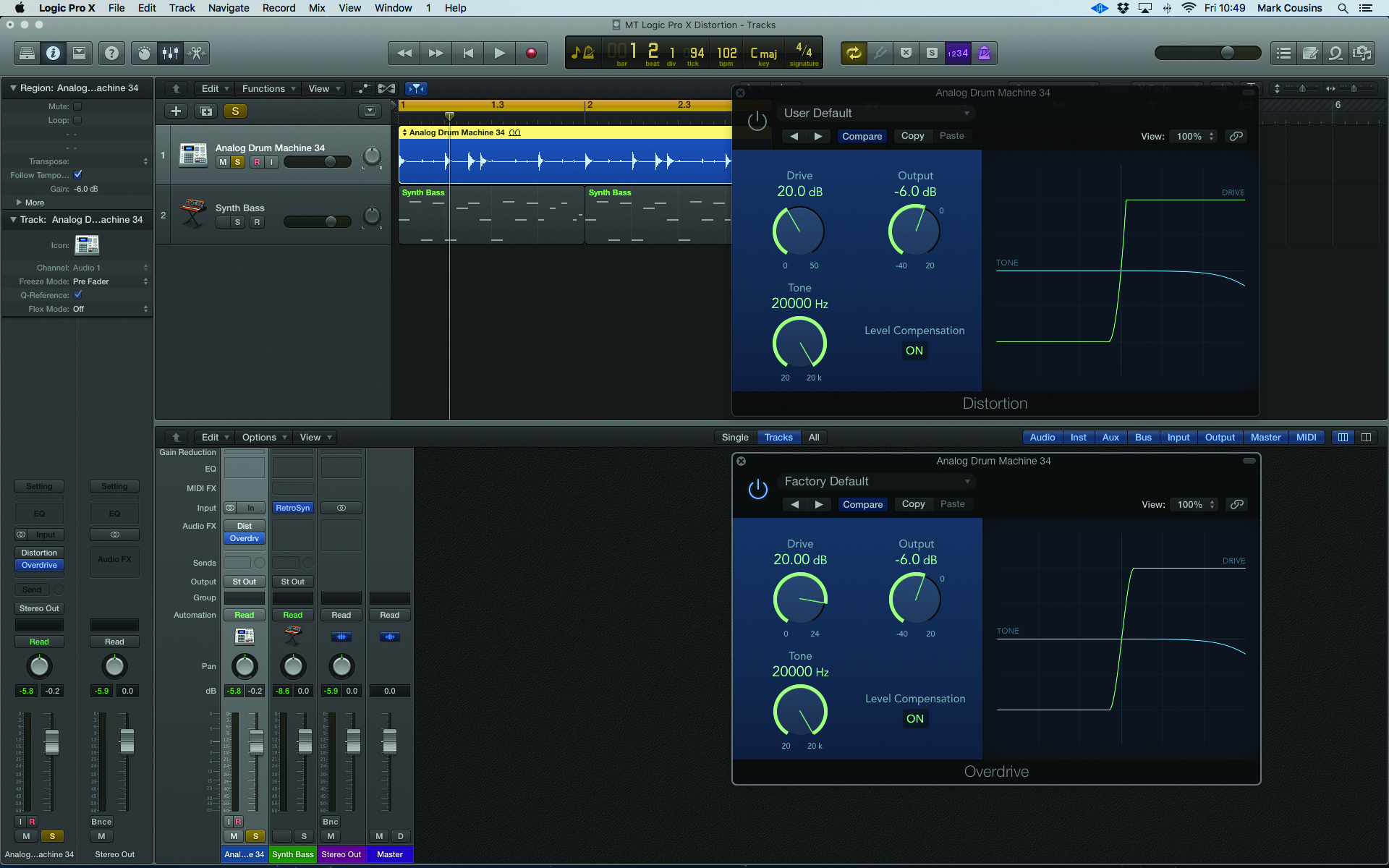 3. Try placing an instance of Overdrive on the same channel, matching the settings between the two plug-ins. A/B the two flavours of distortion – note how Overdrive has warmer sound, while Distortion sounds brighter and edgier. 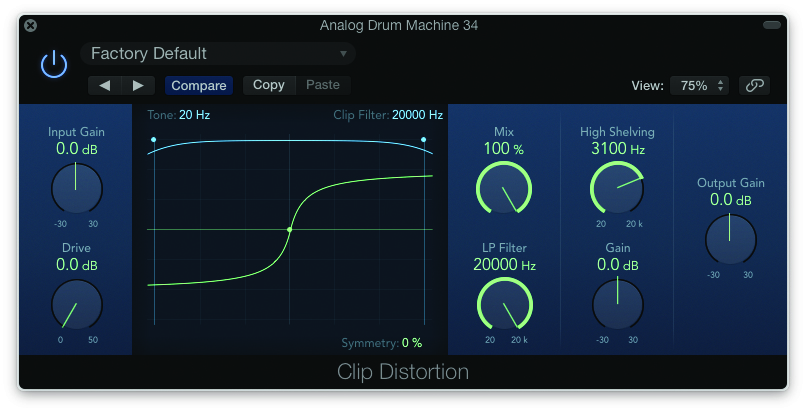 4. Try listening to the sound of Clip Distortion. To understand how it works, start by creating an initialised ‘reset’ – with Mix at 100%, Drive at 0dB, the two filters (Tone and Clip Filter) at extremes and the LP Filter at 20,000Hz. 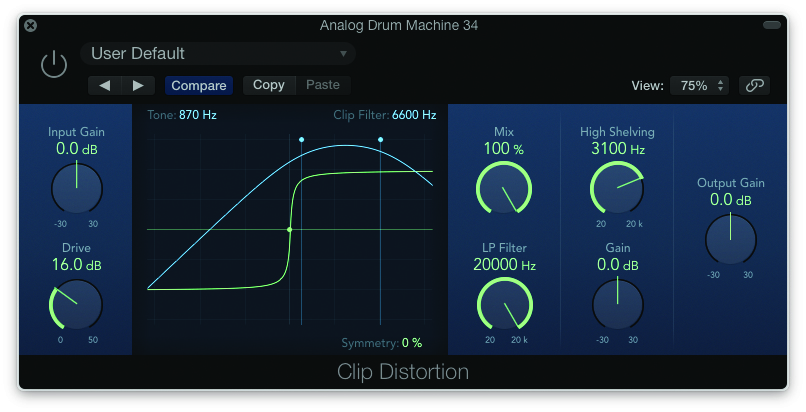 5. Clip Distortion offers the unique opportunity to filter the distorted element of the signal. Here, we filter the input to focus on the snare (70 Hz and 6600Hz for Tone and Clip Filter respectively) and increase the Drive to around 16dB. 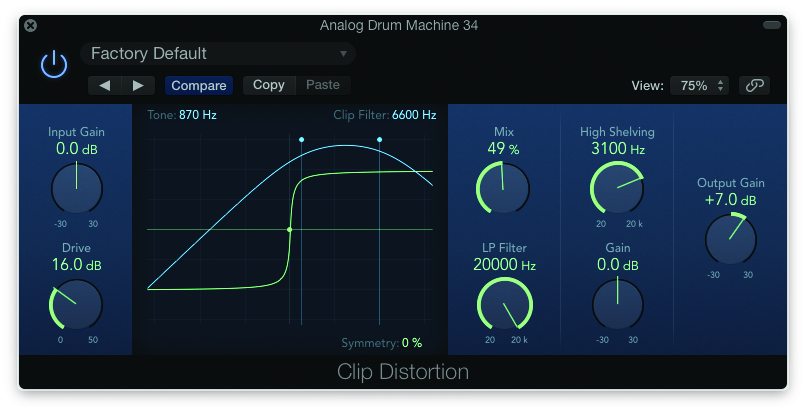 6. Use Mix to create a blend between the clean signal and the frequency-focused distortion. Set the Output Gain to around +7.0dB and A/B, noting the Clip Distortion’s colour of the midrange without sounding notably distorted.