How to use Cubase’s channel-strip processors

Studio consoles typically feature EQ on every channel and the best of them include per-channel dynamics and other processing, too. There’s no need to fill up your insert slots to mimic this in Cubase, though… 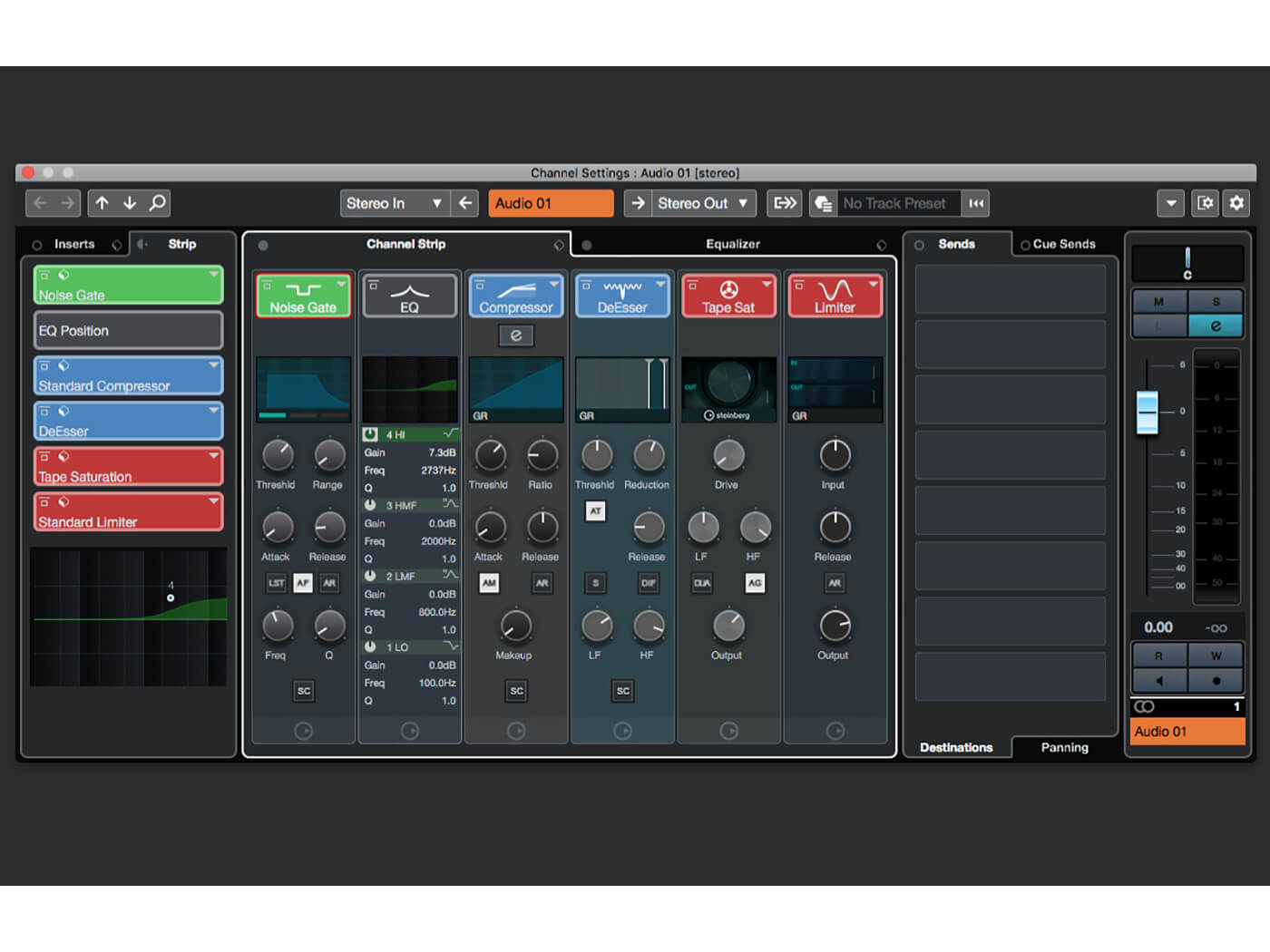 When tracking and mixing, there’s a standard set of processors that we’re likely to reach for: EQ certainly, compression regularly and often other tools, such as gating and limiting. Traditionally, before DAWs took over, analogue mixing consoles provided some or all of this functionality on every channel – practically all consoles include per-channel EQ and higher-end models often have dynamics and other processors thrown in, too.

Using insert plug-ins, modern DAWs can be configured with similar amounts of per-channel processing, but this isn’t without its drawbacks. Hunting through plug-in menus every time you need a simple EQ or compressor is tedious and there’s a limit to the number of inserts that can be added to a channel, so you won’t necessarily want to use up those limited insert slots for basic ‘bread and butter’ processing duties. And if you’re collaborating with others by sharing project files, it can be difficult to ensure that the plug-ins you are inserting will also be available on your collaborators’ systems.

Cubase’s channel strip offers a solution to all of these problems. In essence, it’s a set of additional channel-insert points, each with a predefined use, aimed at providing the same tool set as found on a high-end studio mixing console. While its biggest benefit is convenience, the plug-ins it uses are tightly integrated into Cubase and so tend to be more efficient than more elaborate – or less well optimised – alternatives. It also solves the ’missing plug-in’ problem when working with other Cubase users, as they are guaranteed to have the exact same processors.

The strip provides per-channel processing slots for gate, compressor, ‘tools’ (de-esser or envelope shaper), saturation, limiting and EQ. With the exception of EQ and gate, which have just one processor each to choose from, each slot offers a small selection of processors – a choice of standard, tube or vintage compressor, for example. The EQ slot is slightly odd in that it’s presented as both a standalone section of the mixer channel and as part of the channel strip, but in practice, it doesn’t matter which set of EQ controls you use, as they’re all connected to the same underlying EQ processor.

There are a few different ways to access and interact with the channel strip. The Track Inspector of the main Project window has a section that allows you to select the strip’s specific plug-ins, load plug-in and strip presets and reorder the processors, but does not provide access to the processors’ settings or control panels. Over in the Mix Console, the strip’s plug-in controls can be displayed as a rack in the console, although here, the limited space and narrowness of each channel can make this a bit fiddly to work with. Finally, opening the Channel Settings panel provides full access to every aspect of the channel strip.

In terms of signal path, the channel-strip processors come after any inserted processors and before any sends applied to the channel. This is normally exactly how you’d want things to be, but there are times when you may wish to insert additional processors after the channel strip – in this situation, the solution is to buss the channel to a new Group or Effect channel (they’re fundamentally the same), and to apply the additional inserts on that new channel.

While the Inserts->Strip->Sends routing is fixed, the processors within the strip can be reordered as required, which allows for a lot of sonic flexibility – placing an EQ before a compressor can give very different results to placing it after the compressor, for example.

As mentioned above, one of the channel-strip slots is dedicated to saturation emulation, for injecting some analogue-style warmth. This has three different saturation models to choose from: Magneto II – which is also available as a standard insert plug-in – and Tape Saturation mimic the distortion and compression of tape recorders, whilst Tube Saturation emulates the sound of a tube-equipped preamp.

When using this sort of saturation emulation, it’s worth considering where in the processing chain it should be applied: typically, tube saturation will sound most authentic if positioned as the first strip processor, because in the analogue world, the preamp would be the first stage of an input signal path. Tape saturation, on the other hand, works well at either end of the strip’s processing chain, because the tape recorder it’s emulating could be thought of as the last stage in an input signal path, or the first stage in a playback/mixdown signal path.

Saturation processing of this sort should be used with caution, though, as it can be a fine line between adding character to a track and creating a fuzzy mess… unless that’s your specific intention, of course! Let’s take a look at all of this in action. 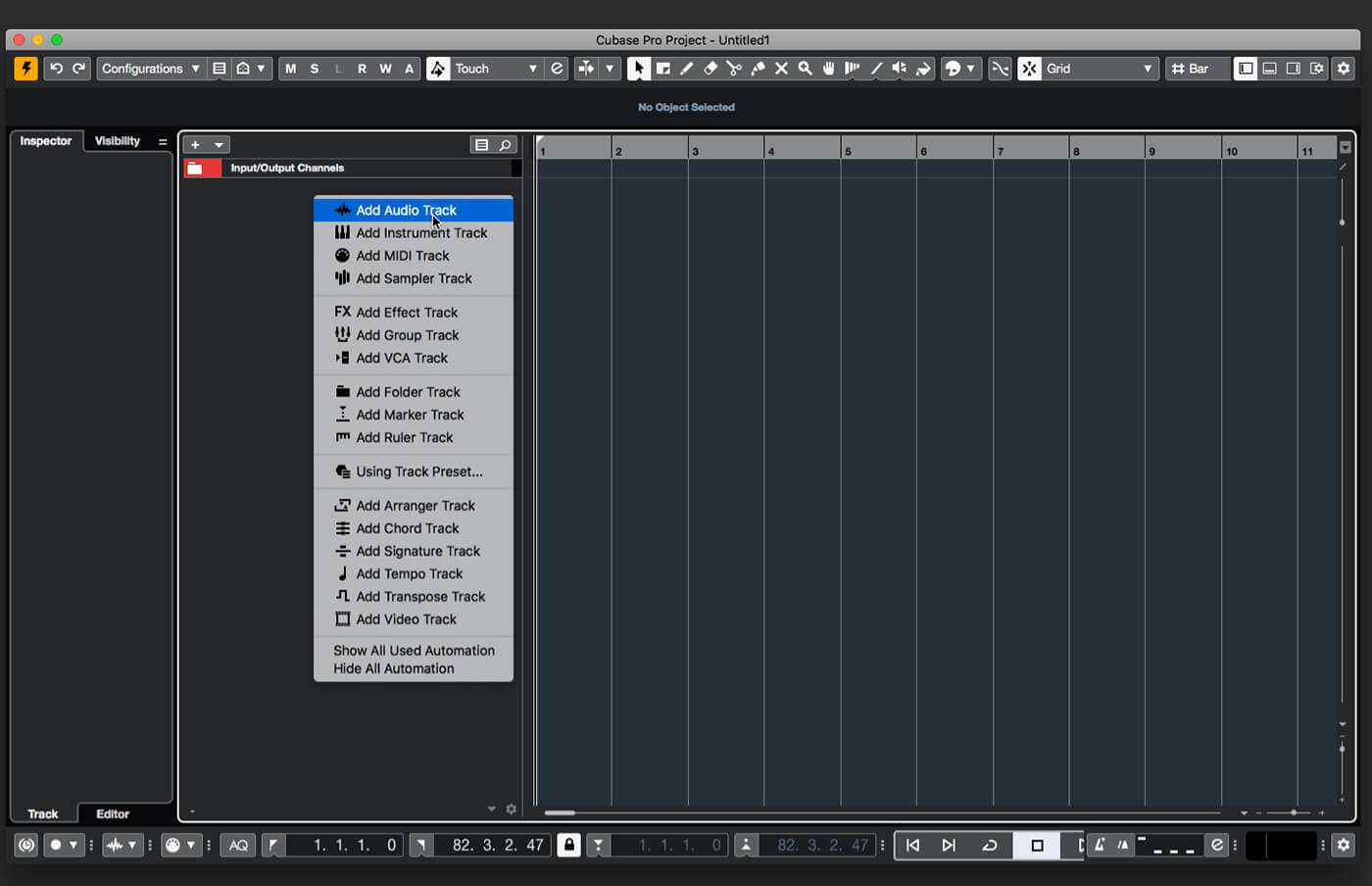 1. We’ll start by looking at the different ways of accessing the channel strip and the processors it offers, so fire-up Cubase, create a new empty project and add a single audio track to it. 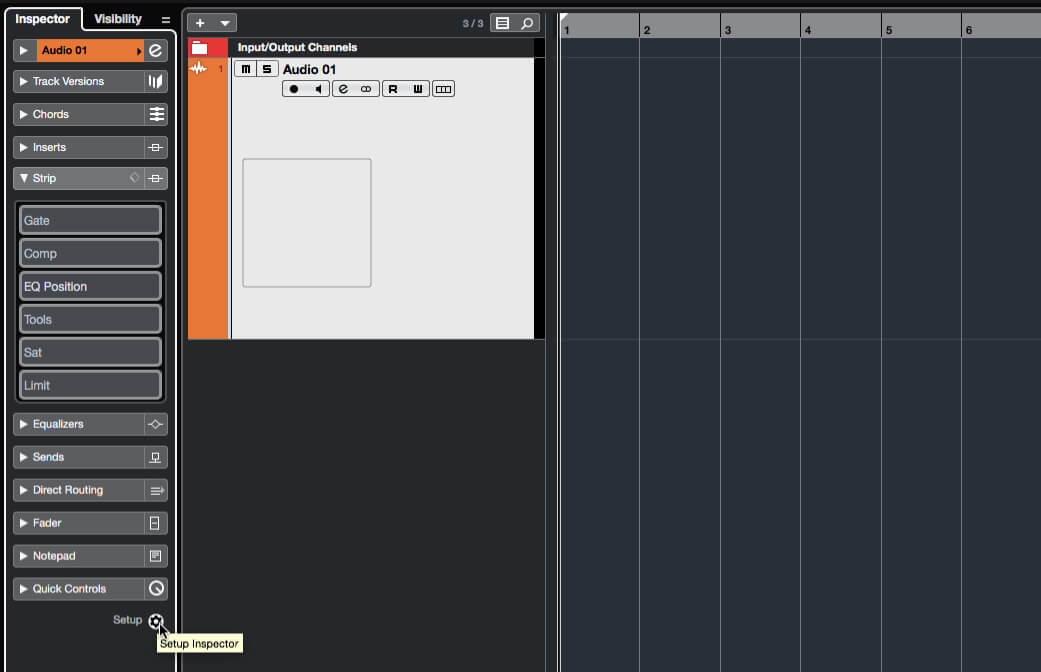 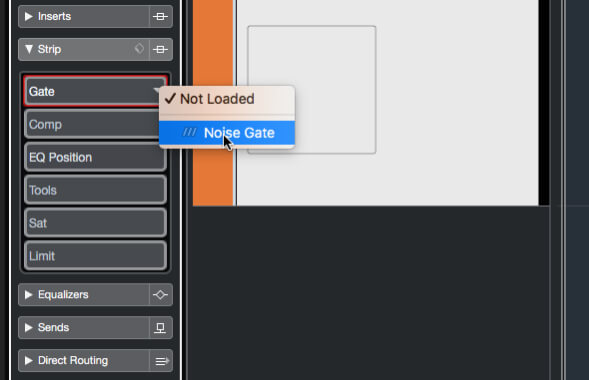 3. Initially, the strip’s processor slots are shown in grey, indicating that no processor is loaded. Hold your mouse pointer over the Gate slot, click the drop-down arrow that appears at its right-hand side, then select Noise Gate. 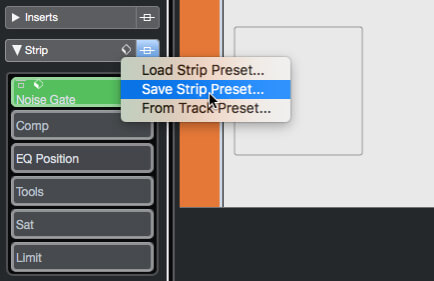 4. The slot’s colour changes to indicate that a processor is loaded into it and buttons are added that allow you to bypass the processor and manage its presets. Notice also that the entire strip section can be bypassed and have presets loaded and saved. 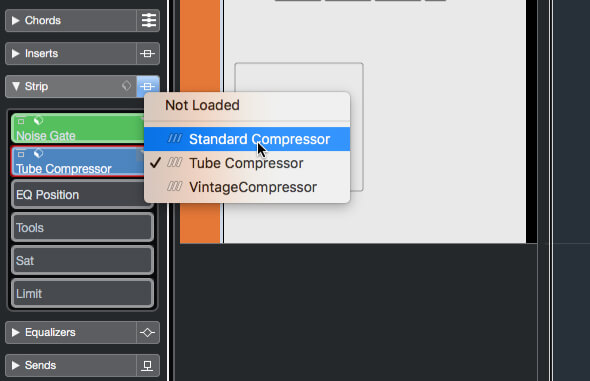 5. Click on the Comp slot and notice that it automatically loads a Tube Compressor processor (all empty slots will autoload a processor when clicked). Now click the drop-down arrow in the Comp slot’s upper-right corner and note the other two processor options. 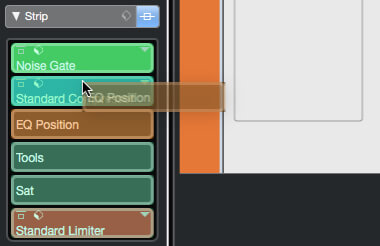 6. Go through the rest of the strip slots, taking a look at the processor options available to each. Also notice that activated slots can be dragged to new positions in the strip and that this is the only function of the EQ Position slot.

VST CONNECT allows engineers and artists to work together remotely while delivering an experience like working in a control room and live room. All the artist needs is a decent mic, audio interface and the free VST Connect Performer installed on their computer – the engineer does everything else (as always!). 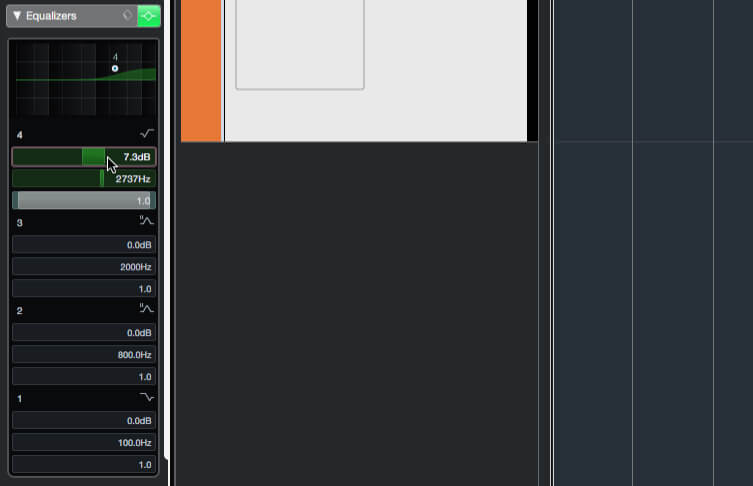 7. EQ has its own section of the Track Inspector – locate this and expand it to see its controls. The EQ is a four-band parametric affair – click on one of the band numbers to enable the band, and enter some random settings for it. 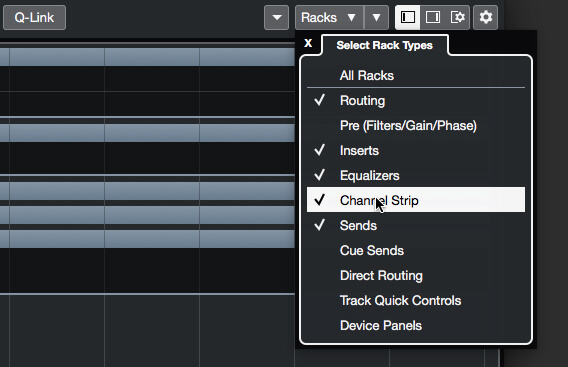 8. Open the Mix Console and, in the Racks section above the faders, locate the strips rack. If this isn’t visible, use the Racks dropdown menu, located at the top of the Console window, to enable the channel-strip rack. 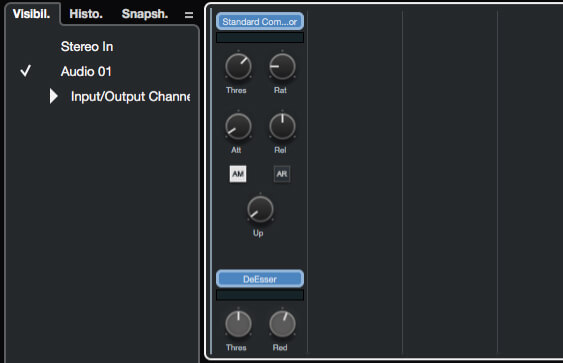 9. Expand the strip rack. If you’ve enabled a number of strip slots then notice you’ll need to scroll the rack in order to get to all of the strip’s controls. You can, however, collapse each control panel by clicking the slot name above it. 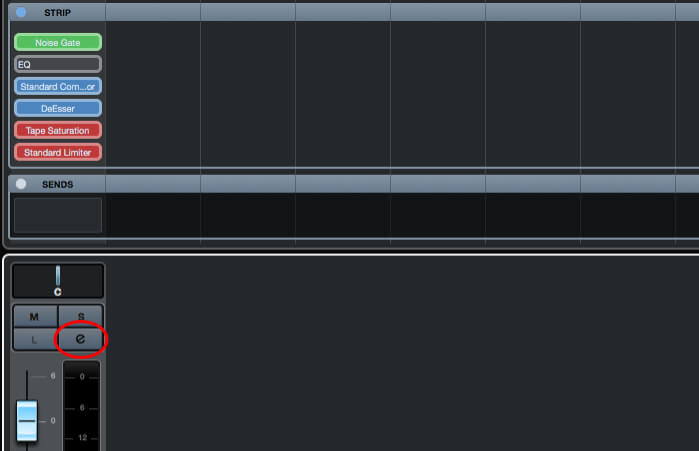 10. Once collapsed in this way, the strip slots function much like those in the Project window, allowing you to select, bypass and reorder processors – experiment to see this in action, then click the Channel Settings button (that is, the ‘e’ button above the fader). 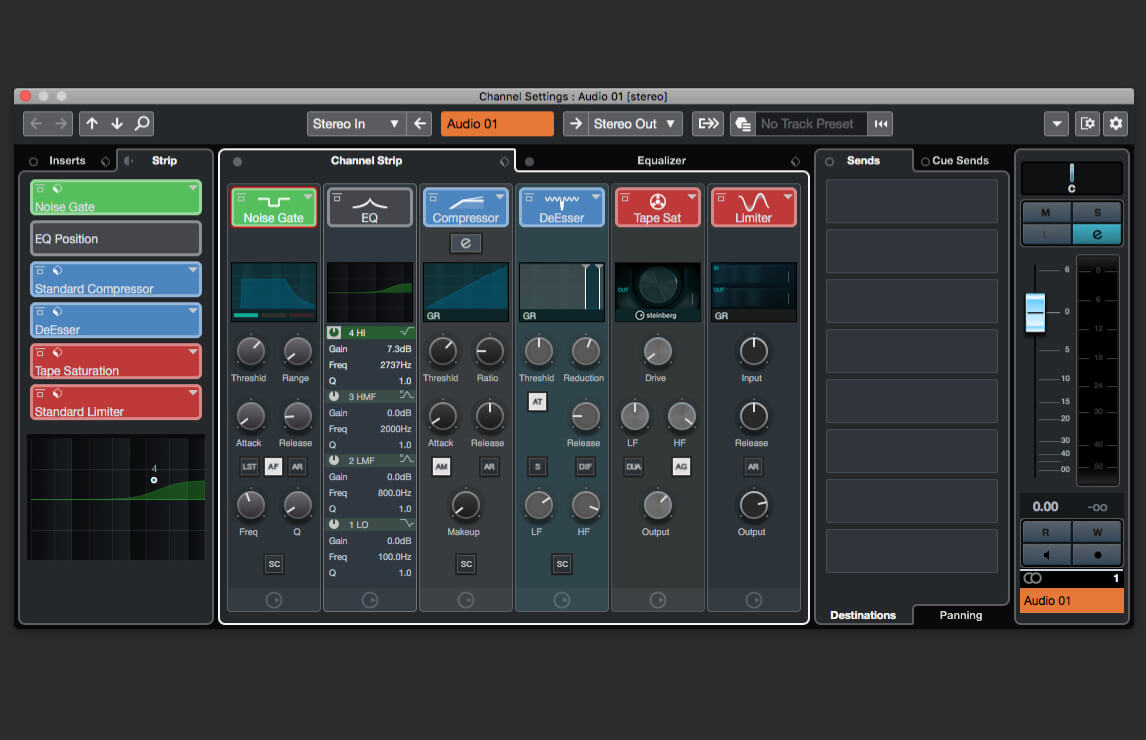 11. The Channel Settings panel provides a comprehensive and easy-to-use view of the strip, with all functions and most processor controls available. Notice that here, the EQ is shown as part of the strip, but that the settings we made earlier are present.

CHANNEL SETTINGS PANEL is a fantastic one-stop-shop for getting at all of the settings for a track. It’s particularly useful during track laying, where you are focusing on only one input at a time and don’t need the quick-access and ‘big picture’ view of the mix console. 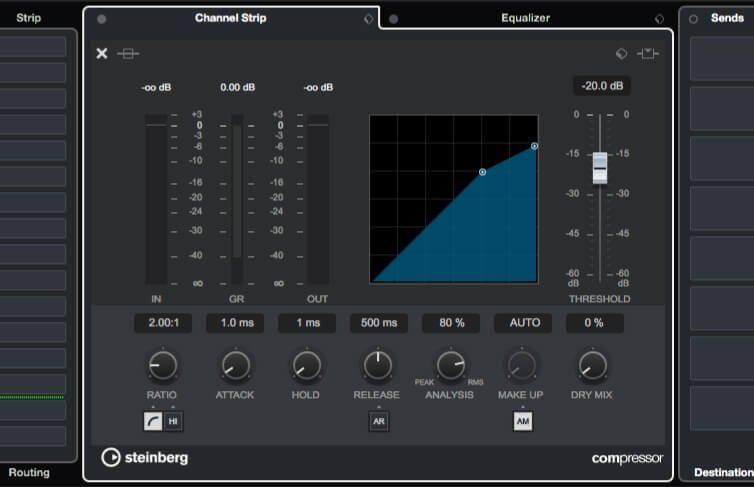 12. The Comp slot in this view includes an ‘e’ edit button and clicking this will expand its controls to fill the centre panel of the Channel Settings window. This provides access to additional compression settings and higher-resolution gain reduction metering. 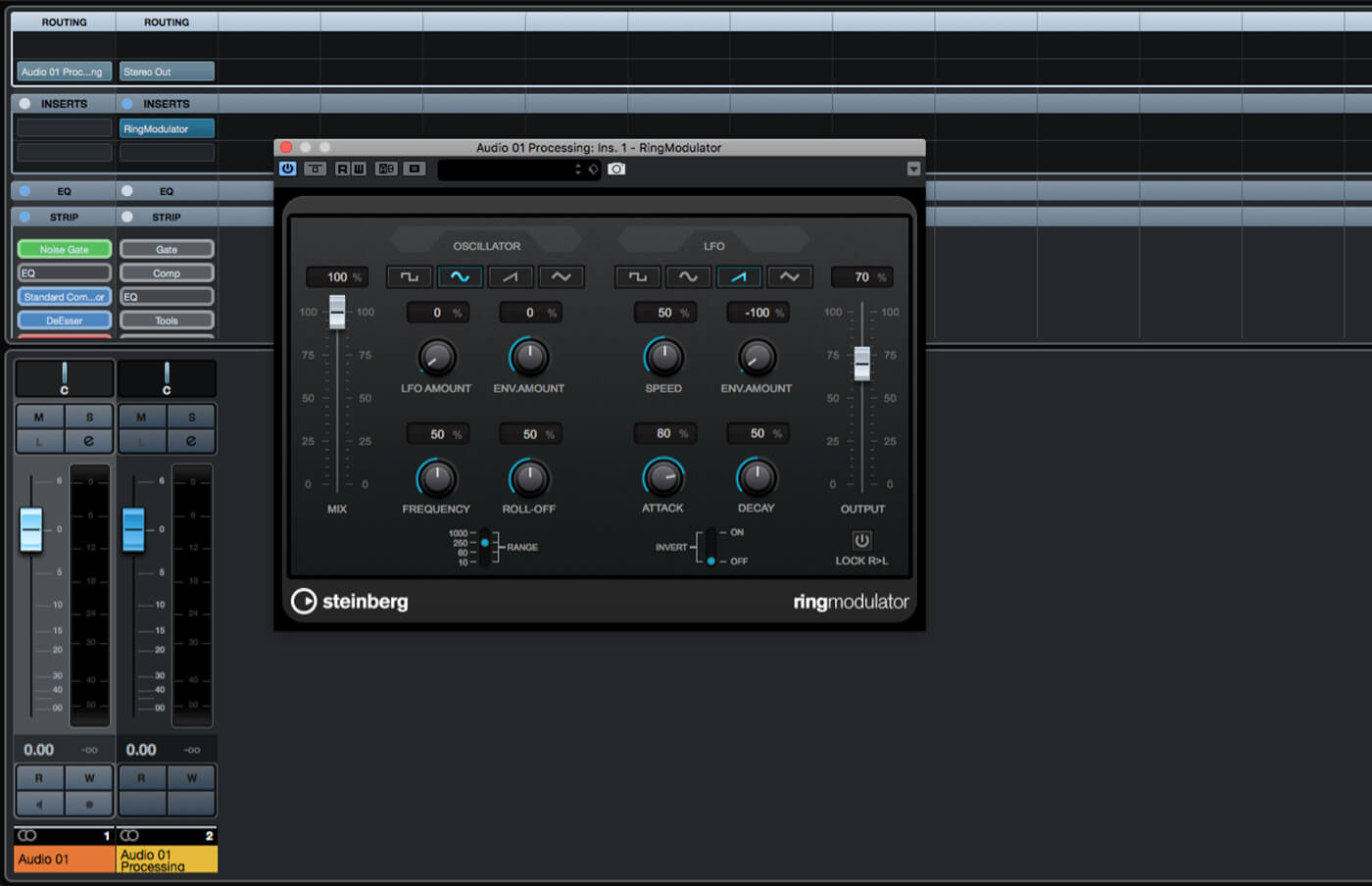 13. Create a new Group track. Route the output of your existing audio track to the new Group track. Now, any processors you insert on the Group track will be applied after the channel-strip processing being performed on the first track. 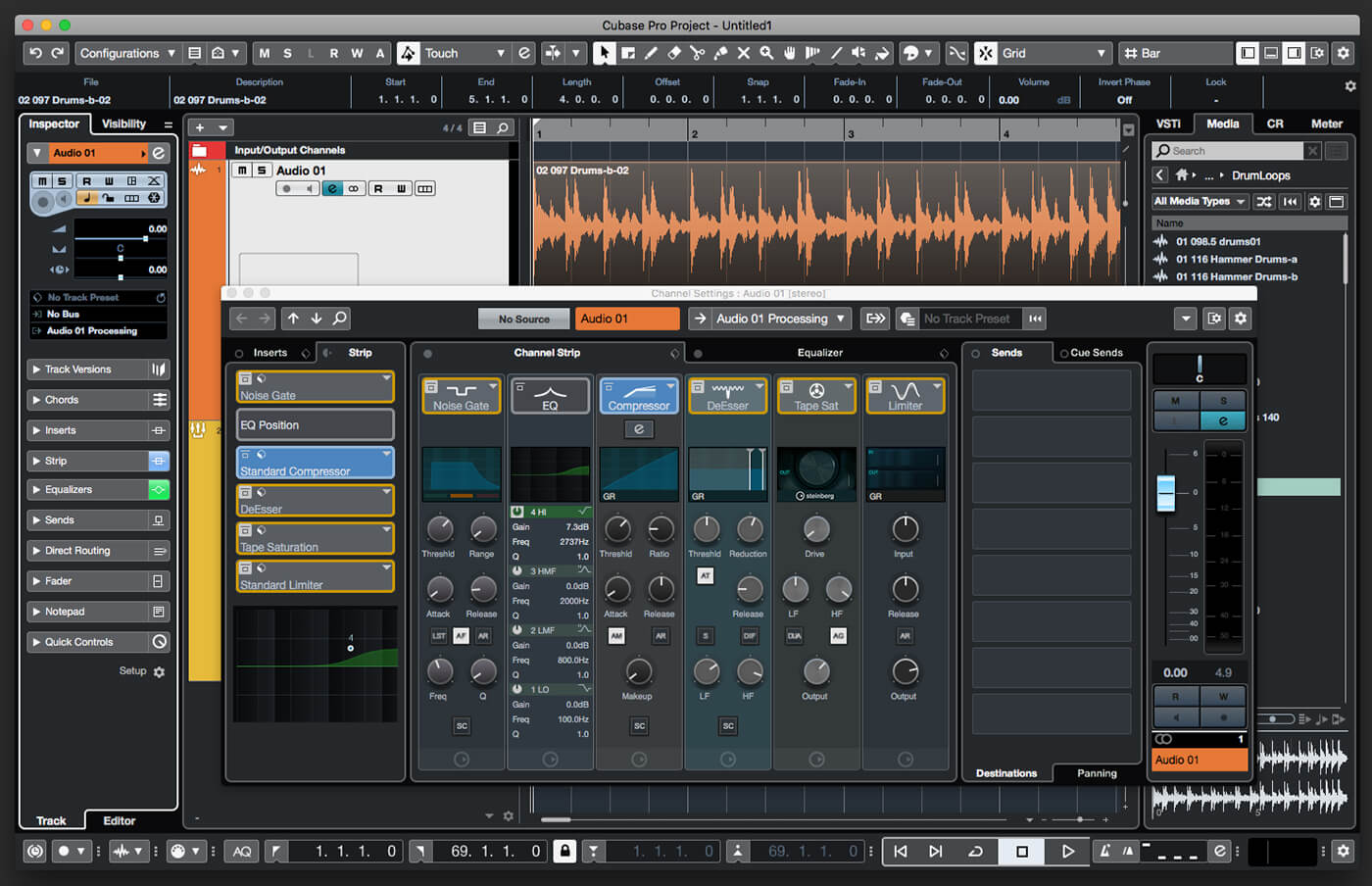 14. Flip back to the project window and import a drum loop or similar onto the audio track. Click the ‘e’ button in the Track Inspector or on the track’s timeline header to open the Channel Settings panel, then bypass all strip slots other than EQ and Comp. 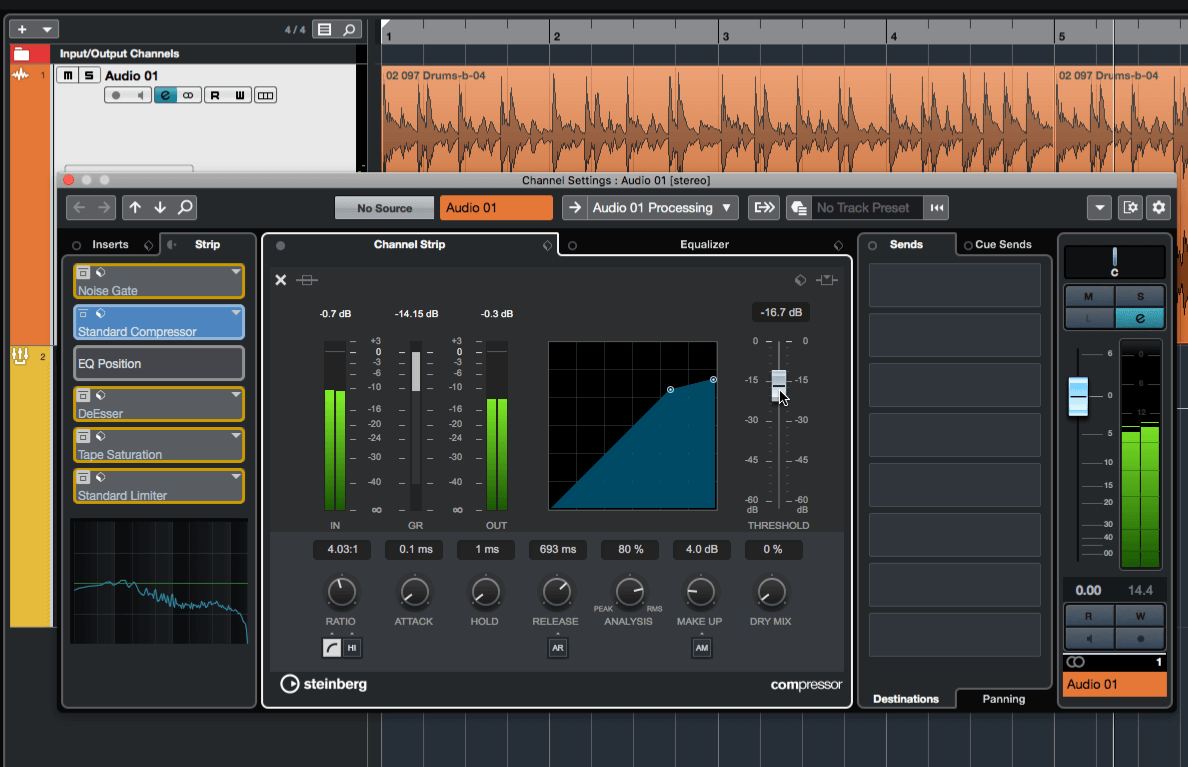 15. Drag the Compressor slot so that it comes before the EQ. Set a relatively high compression ratio of around 4:1 and a fast attack and medium release. Then reduce the threshold until you get a noticeable, but not overcooked, compression effect. 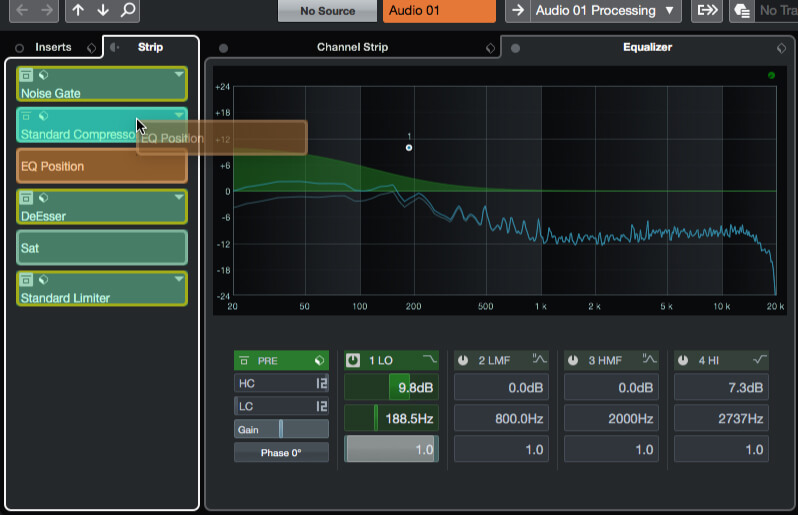 16. Click the Equalizer tab of the Channel Settings panel. Dial in a big, exaggerated bass boost, noting how this sounds. Now move the EQ position so that it comes before the strip’s comp slot and listen to how this changes the overall sound. 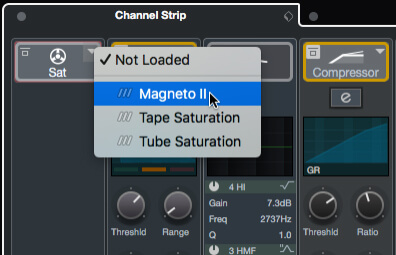 17. Return to the channel-strip tab and bypass the Comp slot (leave the EQ enabled). Enable the Sat slot, load the Magneto II processor into it and position it as the first processor in the strip. Hit play and dial in some exaggerated settings. 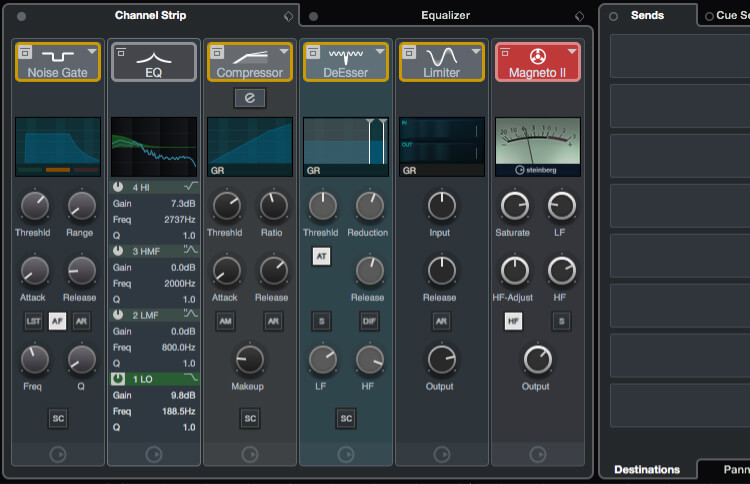 18. Listen to how the saturation sounds, noticing its gentle compression effect, its fuzziness and the airiness it creates in the loop. Now move the Sat slot so that it’s the last processor in the strip and listen again – you should notice quite a different sound.