Dave Gale continues his monthly look at the Eurorack world and unravels the best starting point for creating great-sounding electronic drums… It has to be said that drums are possibly the single most common and (debatably) important factor in electronic music. For many, the sound of the drums used on a track will almost serve […] 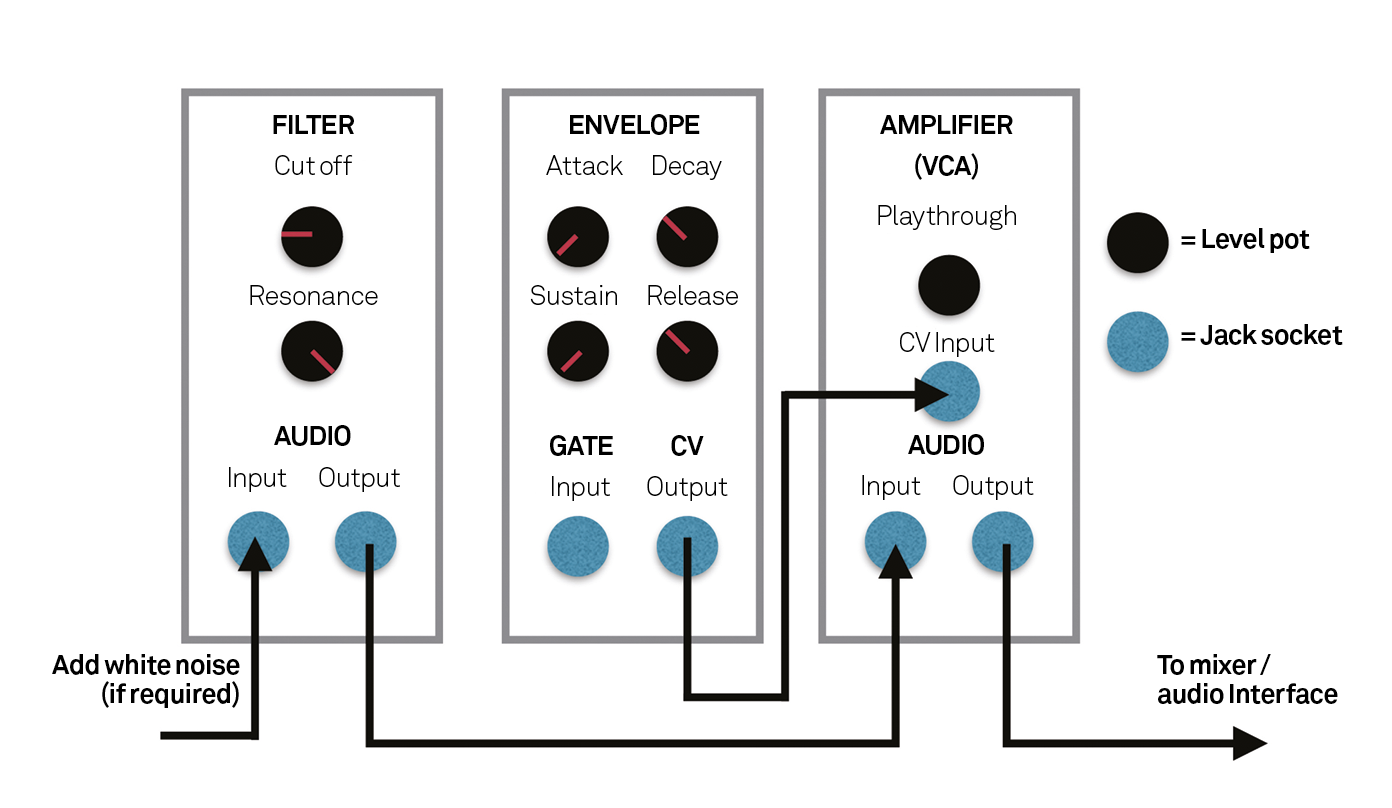 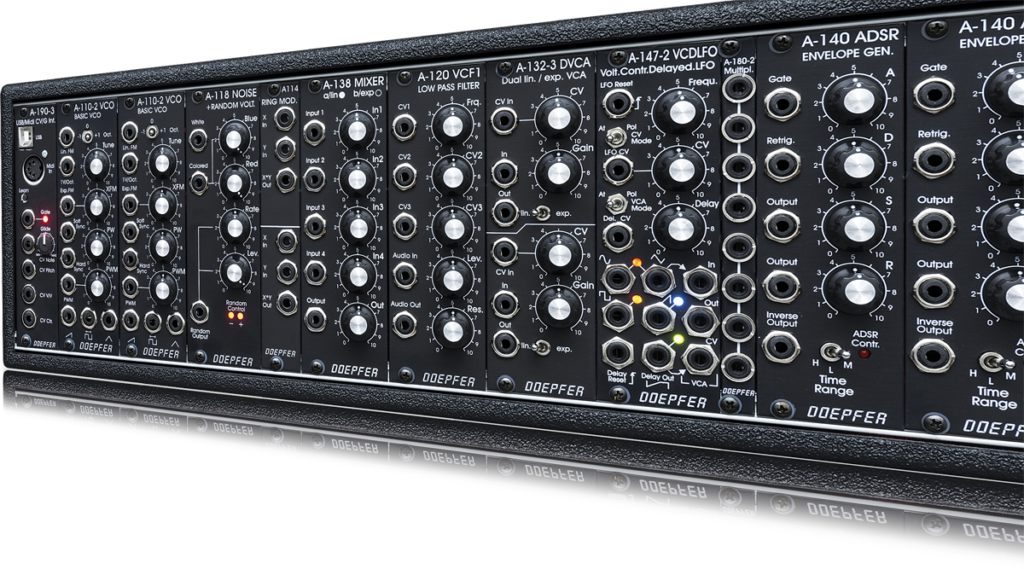 It has to be said that drums are possibly the single most common and (debatably) important factor in electronic music. For many, the sound of the drums used on a track will almost serve as a date-stamp for when a track was produced. So, why is this? Well, in the same way that the computer you have on your desk (or now, more likely, tablet on your knee!) will give us a clue as to the year, so will the sonic signature of the drums on a track.

And so it came to pass that Roland made many drum machines in the late-70s and early 80s – two of which were deemed obsolete and out-of-date within a few years of production, thanks to the onslaught of the digital sampling age. This meant that many bedroom producers bought them cheaply in the late-80s, and the rest, as they say, is scribed in musical history.

As many of us know, vintage 808s and 909s still seem to cost a small fortune, yet us Eurorack folk can create more than a passing resemblance to the original, with a little thought and knowhow. We can even evolve them into something completely different in character, which might inspire new musical directions.

Let’s spend some time looking at one of the most basic and simple sounds to make – the kick or bass drum. The original kick analogue circuit of the 808 started with a sound that was sinusoidal, that is to say that there was very limited harmonic content.

In a sense, this statement is incorrect; a fundamental sine wave should have just the one harmonic, the fundamental but, thanks to age, and wear-and-tear of the analogue circuitry, all sorts of overtones can creep into the sound, often manifesting themselves as harmonic overtones. You could take three 808s, put them side by side and they would all sound different, so what we’re looking to do here is just summon the ‘spirit’ of the original vintage machines, rather than create an absolute facsimile.

Most envelopes will do the job for kick purposes pretty well. I’ve used Pittsburgh’s, Moog’s, Roland’s, all to great effect, but I have to say that one of the snappiest envelopes that I’ve ever come across is the Tiptop Audio Z4000. This envelope is perfect for percussion sounds, as the front end has so much control. You can get clicking if you want it, but also back it off with enormous flexibility, until you get it just right. Perfect for that killer kick…

An obvious option for getting great drum sounds is to look at some of the production modules that are available, often cloned with very similar circuitry to the vintage units we all lust after. Probably the leader in this field is Tiptop Audio, which has an ever-growing supply of drum modules, all of which are designed to cater to the musician wanting 808/909-style sounds. Thankfully, they often go beyond this remit, offering greater control over CV, and they do sound pretty damn good while costing a fraction of the price of a vintage 808 or 909.

You could turn to an oscillator with a triangle- or sine-wave capability, and use this as your starting point for an 808-style kick; or a more common approach that many use is to turn to a self-oscillating filter.

You will know if you have a self-oscillating filter if you slowly turn the resonance control on your filter all the way up, and then turn your cut-off frequency control, making sure that the filter output is heading in the direction of your VCA, with an open play-through channel. At this point, you will hopefully hear some feedback, in the shape of a sine wave or similar (watch the volume – sine waves can be destructive, so keep the level low to start with). 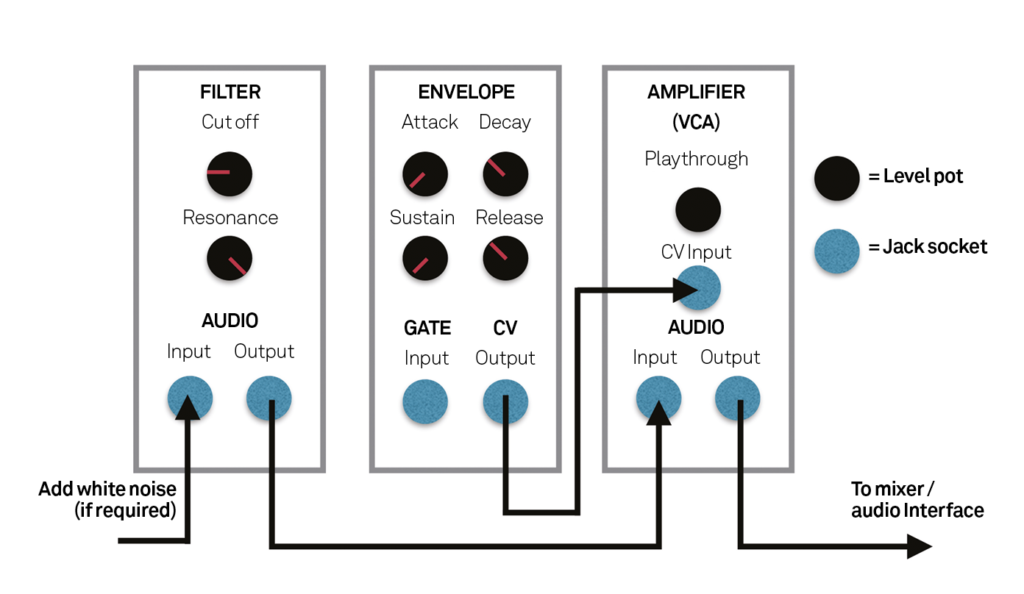 Filter output to VCA, with gating controlled by the envelope

Apart from hearing the sine tone, you will also be able to shift the pitch using the cut-off frequency control. This means you can tune the tone, which will be your kick sound. This was something that the original 808 was unable to do (it was a popular misconception that you could, thanks to later software emulations). Once you have this confirmation, it’ll probably be best to defeat the volume on the VCA, as the next thing to do will be to route your ADSR envelope in the direction of the gate on the VCA.

Now make sure that you have a very quick attack time, followed by a pretty quick decay (no sustain is required here), so that when you trigger your envelope, you will hear something drum-like. It might sound more like a tom than a kick, in which case you would be advised to lower the cut off to an appropriate lower frequency. You may also need to play with the AD envelope settings to make sure they’re just right.

Bear in mind that different styles of music will require different settings. If hip-hop is your bag, a nice, long decay tail will be the order of the day. If you’re more into electronica, try something short in length, with more of a tight thud.

Another intriguing experiment to try is to route the same envelope in the direction of the cut-off frequency on the filter. The envelope will now also control the pitch, via the cut off, but you may want to dial in less of this, so that the pitch change is not too drastic. Use of a second envelope might be wise here, too, so that you can have independent control over the pitch of the note, and the amplitude decay tail.

Now that you have your basics, it’s time to think about where to go from here. It has to be said that for many, part of the beauty of the modular is the ability to do things differently from the architecture of a traditional mono-synth. Not being the greatest DIY person myself, I tend to think of my modular as my garden shed – I make things with it, and stand proudly back when I have a sound which I am satisfied with, in much the same way that one might if you had built a table, in the aforementioned shed. 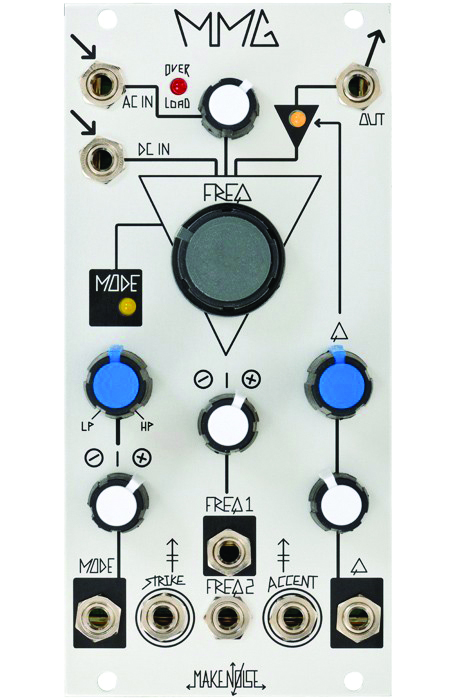 The MMG is a great sounding, self-oscillating filter, perfect for kicks and more besides

An absolute port-of-call for experimentation should be some form of distortion, and these can take many guises these days. There are the obvious distortions which are akin to guitar pedals, but one place where us Euro folk like to go is in the direction of the bitcrusher.

Now, I have to be honest and say that my flavour of bitcrushing and distortion tends to be more DAW based, as I liked having the control in production. However, great results can be achieved with the likes of the Roland Bitrazor and the Pittsburgh Modular Crush.

These units will dismantle the bit-structure of your kick, adding punch, crunchiness and an overwhelming number of overtones, which you then might ironically want to pass through another filter, to get rid of too much colour in the top end. It just depends on what you are after. 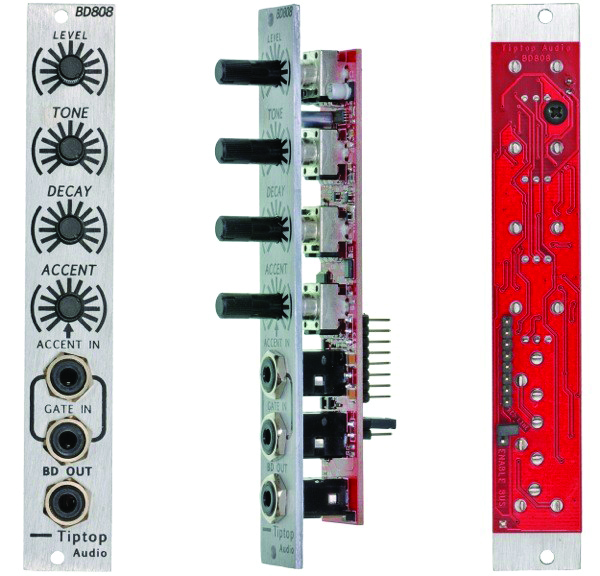 Reincarnation of the classic – the Tiptop Audio 808 kick, without tuning, just like the original

It’s also worth coming back to the starting point and considering which filter you might use for your kick. Why? Well, some have an overdrive facility, or naturally overdrive themselves. A good example of a ‘first call’ filter for your kick would be the Make Noise MMG.

This vactrol-based filter overdrives at the front end, meaning that the sine tones immediately appear colourful, in that wonderful way that we all like. By inputting some white noise to the filter, as well as overloading the resonance to feed back, further colours can be introduced.