As our step-by-step guide to opening up new percussive opportunities in Logic, Mark Cousins starts tweaking MIDI velocity and introducing plug-ins to begin exploring new sonic options. Make sure to read part 1 before cracking on. 7. One slightly erratic area can be MIDI velocity. Although the tracking is relatively precise, the ratio between the […] 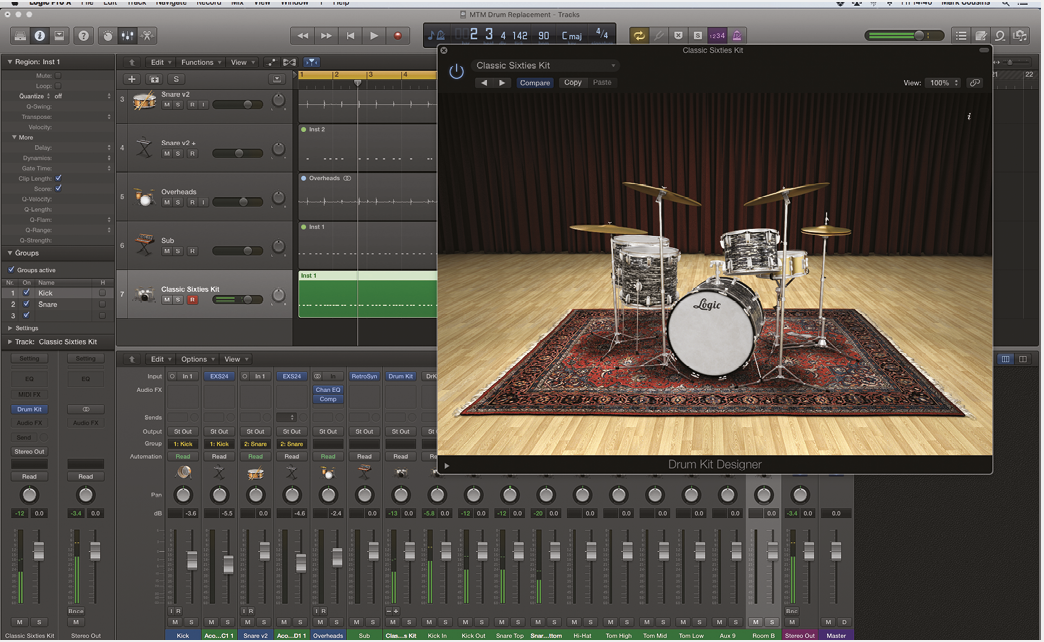 As our step-by-step guide to opening up new percussive opportunities in Logic, Mark Cousins starts tweaking MIDI velocity and introducing plug-ins to begin exploring new sonic options. Make sure to read part 1 before cracking on. 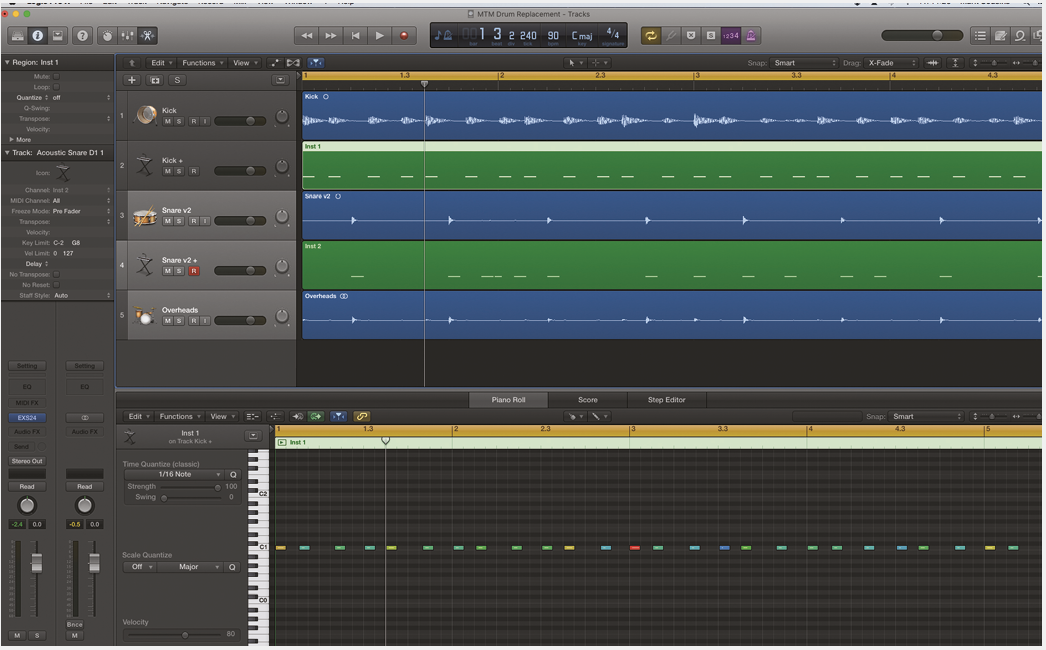 7. One slightly erratic area can be MIDI velocity. Although the tracking is relatively precise, the ratio between the highest and lowest MIDI velocities can be too extreme at times. Open up the Piano Roll to take a closer look at the velocity range. 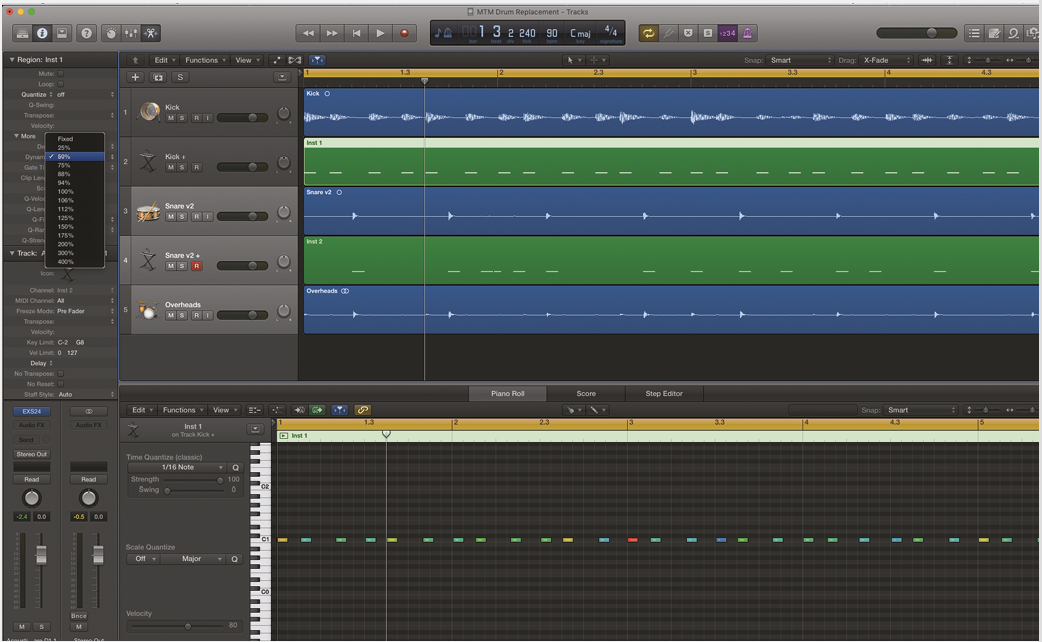 8. As well as manual velocity adjustment, it’s worth looking at two quick-and-easy methods of dynamic velocity adjustment. The Dynamics option, as part of the region’s parameter, is one solution, restricting the range of velocities using a simple percentage control 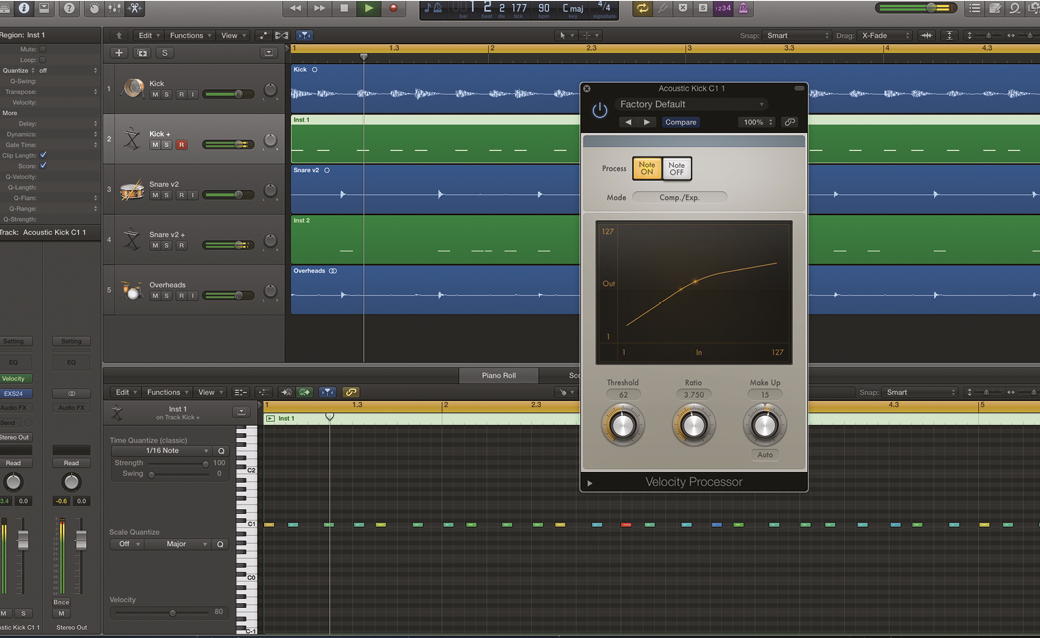 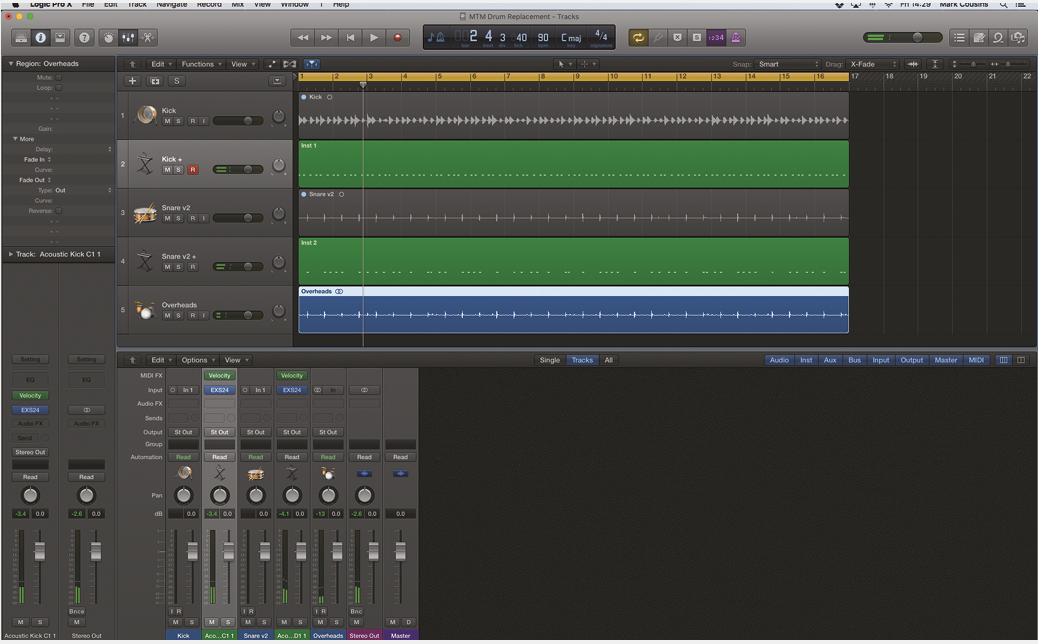 10. Now, let’s start piecing the drums together. One big decision is whether you’re using the samples to augment the real kit, or as a replacement. Start by running the two replacement channels alongside the overheads, to see how they sound together 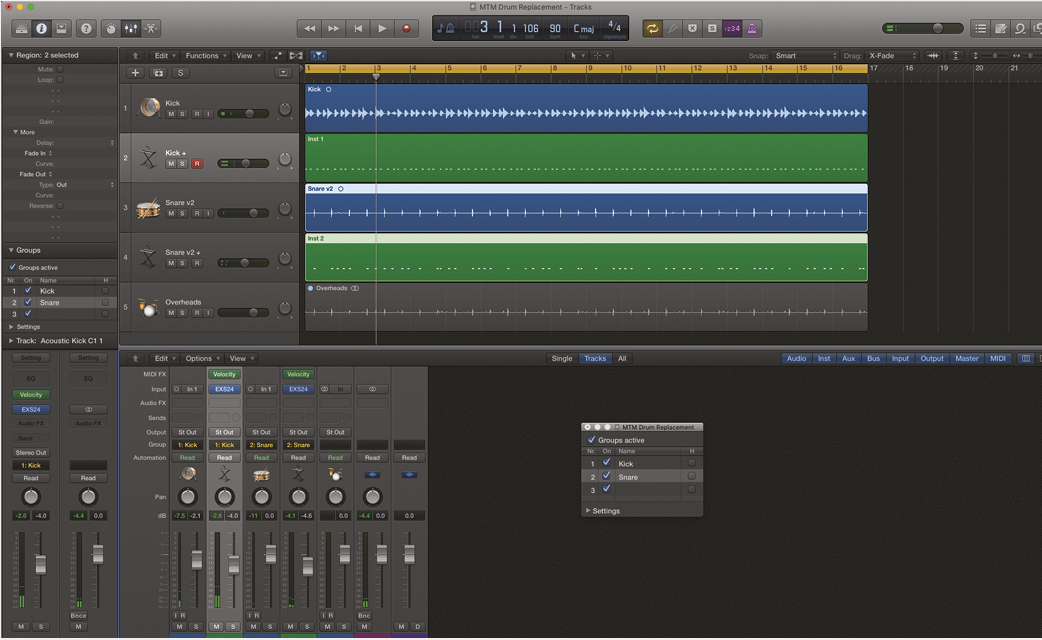 11. In most cases, you’ll probably want to use a combination of both the original recording and the sample doubling. In this case, consider using the Group feature, so you can set the relative balance of kit and sample doubling, and then lock the faders together. 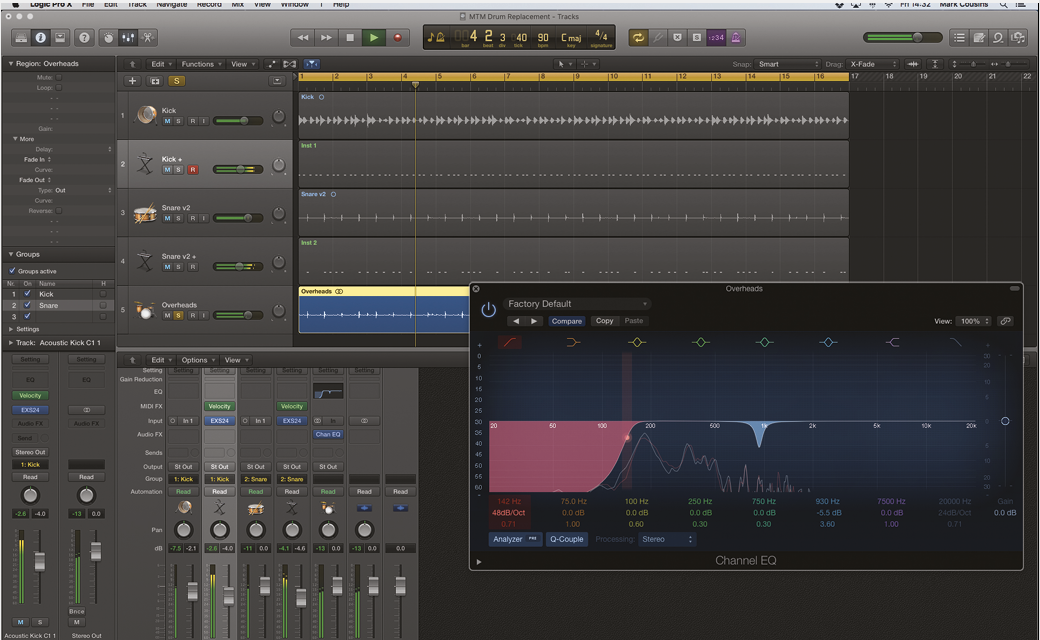 12. Using some additional processing on the overheads can help them sit better with the sample doubling. A high-pass filter setting around 150Hz helps keep the low-end clean (leaving room for the samples), while a cut around 1kHz tames the snare. 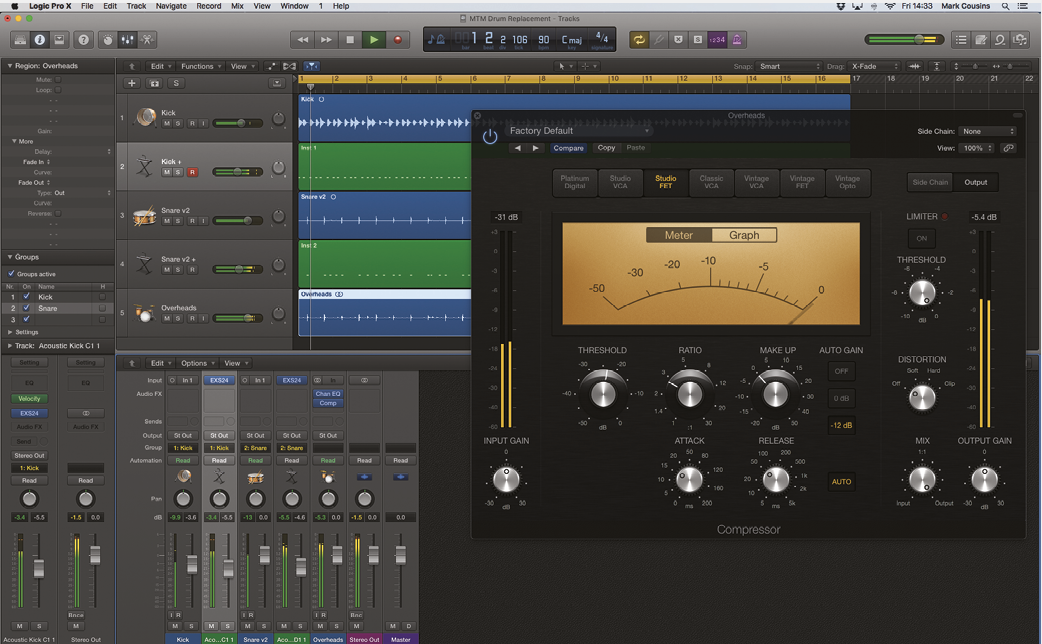 13. Applying compression on the overheads also helps the natural kit sit with the samples. Use the Studio FET module for a fast transient response that subtracts a few more decibels from the snare, giving the cymbals more room to breathe 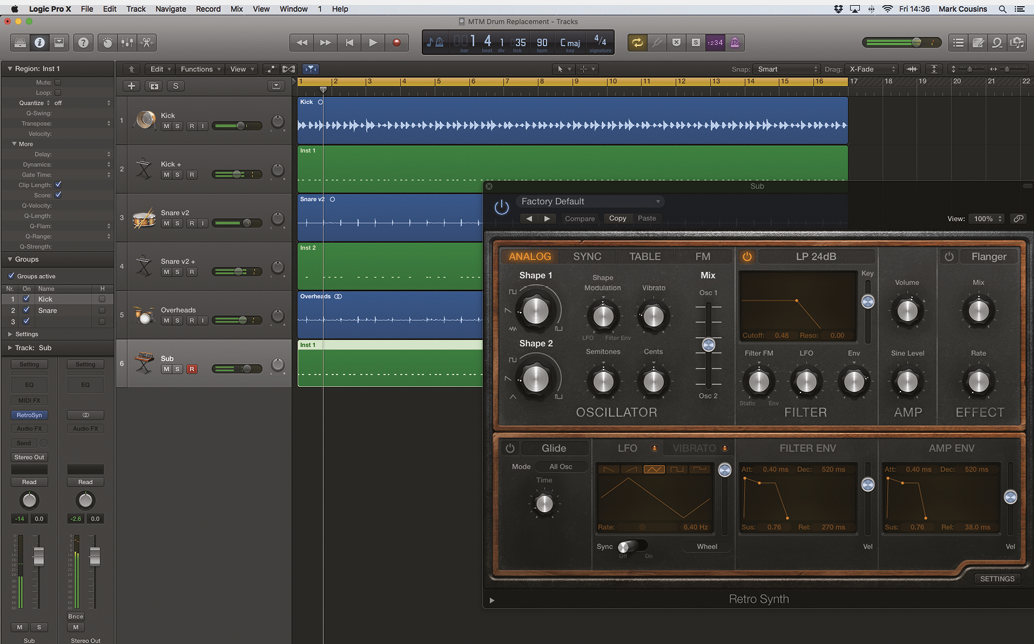 14. With the MIDI region in place, there’s no reason you can’t explore other sound sources instead of, or in addition to, the EXS24. One popular technique is to double the kick drum with some form of subsonic bassline 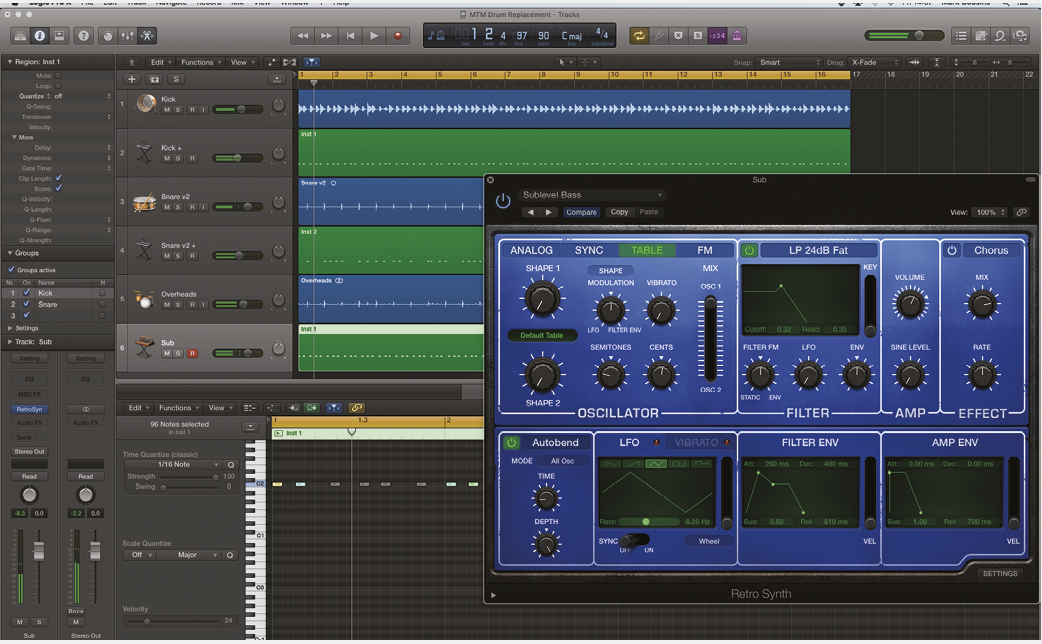 15. This finished result uses a tweaked version of the Sublevel bass, with the MIDI transposed up an octave and all the notes after beat one muted. Adjusting the Amp Envelope’s release phase yields a slow decay, which adds weight to the doubling 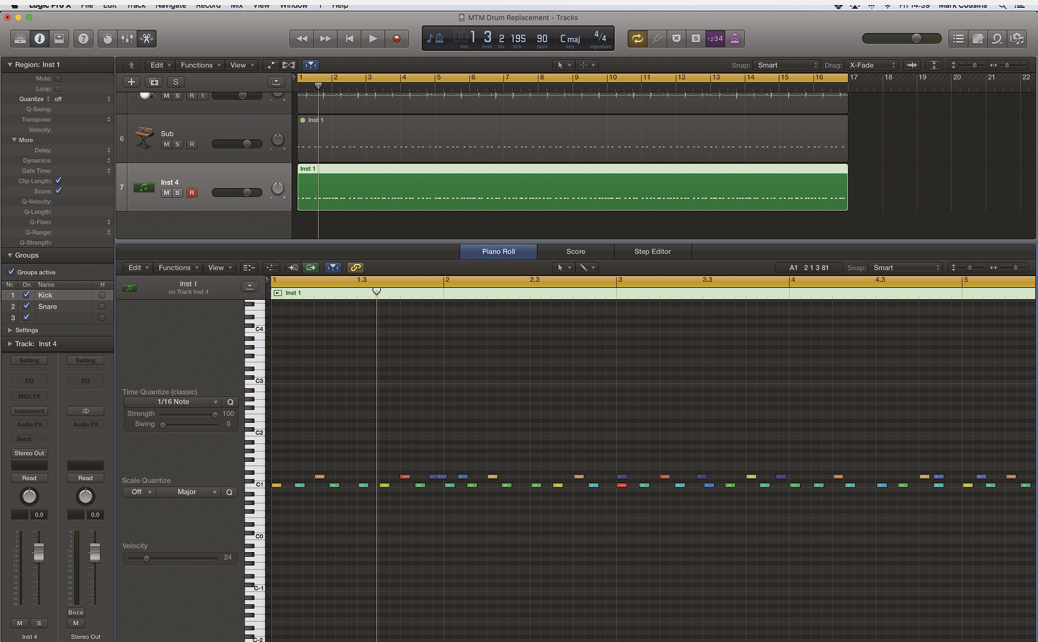 16. Another plug-in worth exploring is Drum Kit Designer, as this gives you plenty of sonic flexibility over the sound of the kit. Start by merging both the kick and snare tracks, and then loading an instance of Drum Kit Designer over this instrument track

17. In this example, we’re completely replacing the original audio, so we’re working with the Multi Output version of Drum Kit Designer. Clicking on the small + icon opens up the individual outputs for each kit element, giving you complete sonic control. 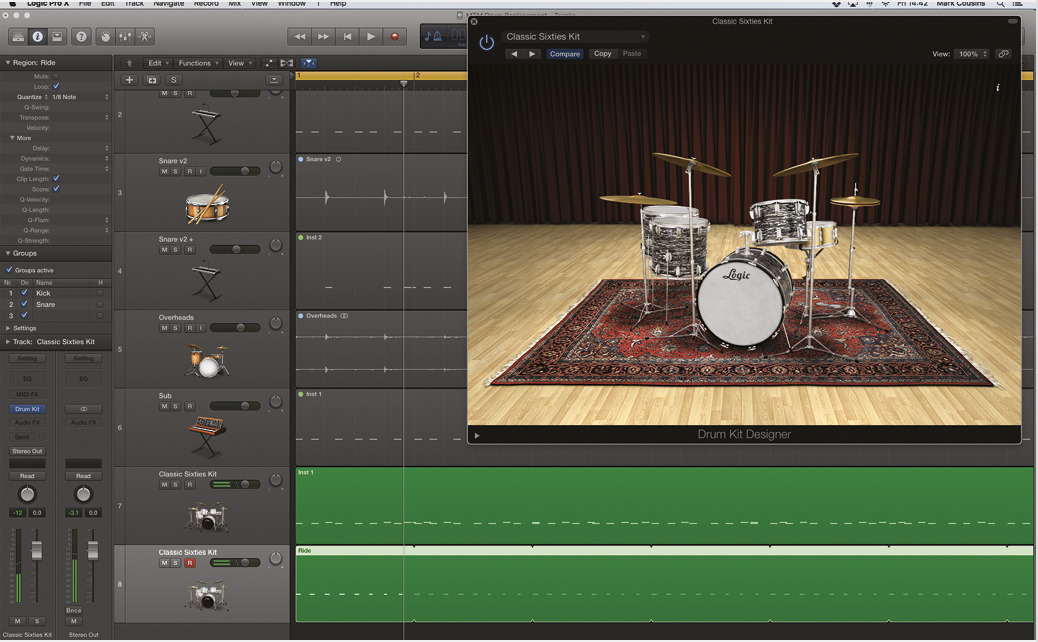 18. Replacing the overheads from the original drum recordings is tricky, so we’ve simply reprogrammed that part of the original performance by ear. What you’re left with is a sonically realistic drum performance, but all in the virtual domain!